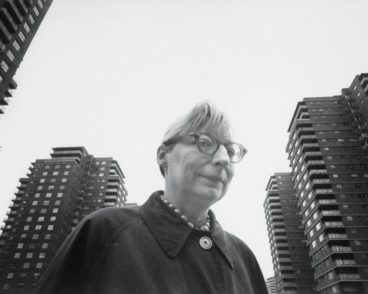 This month, to mark Jane Jacobs’s 100th birthday, Toronto celebrates her as an inspirational oracle who fought valiantly for density, walkability and urban regeneration. I knew her as the cantankerous rabble-rouser who lived down the street

This month, to mark Jane Jacobs’s 100th birthday, Toronto celebrates her as an inspirational oracle who fought valiantly for density, walkability and urban regeneration. I knew her as the cantankerous rabble-rouser who lived down the street

I met Jane Jacobs in 1969, when she hijacked my first class as a teaching assistant at the University of Toronto. It was a course on urban geography, and the professor, a long-time citizen activist named Jim Lemon, had invited her to come and speak. She strode into the seminar room, thrusting placards into my students’ hands and marching us all off to Queen’s Park to protest the half-built Spadina Expressway, which would cut straight through midtown, destroying a network of ravines and almost a thousand homes. Jane was 52 at the time, and full of confidence and conviction about what had to be done. I was young and green, and I’d sure as hell never encountered anyone like her before. My students were equally dazzled.

The year before, Jane had moved from New York to Toronto, partly because her architect husband, Bob, got a great job here, partly so her two sons could avoid the Vietnam draft. She arrived at a cultural turning point in the city—and she fit right in.

Her eventual success thwarting the Spadina Expressway fuelled a wonderful energy. David Crombie, John Sewell and a group of councillors were creating a new vision for Toronto that meshed with the excitement on the streets. Thousands of anti-war protestors were demonstrating in front of the U.S. Consulate. Joni Mitchell performed at the Riverboat, Neil Young went solo, and Margaret Atwood released The Edible Woman. We had Rochdale College and Second City and Gordon Lightfoot. And while Toronto had generated its own thinkers and writers—Northrop Frye, Marshall McLuhan—Jane Jacobs was the first of global importance to move here from elsewhere and stay.

She quickly became the intellectual and corporeal force behind the city’s urban revolution. She was everywhere: she rallied at citizen meetings, at public events, on the CBC. We both lived in the Annex, so I’d often bump into her on Bloor Street, then a vibrant strip of butchers, bakers, bookstores, grocers and Hungarian restaurants.

Jane had a few rules for what made a good city: high density, short blocks, a blend of new and old, life on the street. Her seminal work, The Death and Life of Great American Cities, became the bible of modern urban planning. She had a profound respect for experience, for observation, for the wisdom of the citizen. If a plan didn’t make sense to the mothers walking their kids to school, the local hardware store owner or the senior citizens in the park, it didn’t make sense at all.

She was involved in major proposals like the inspirational Harbour City, a lakefront community on the Island, where Billy Bishop Airport sits now (it’s one of the city’s most mourned unbuilt projects). Her ideas shaped the redevelopment of the St. Lawrence neighbourhood, which was groundbreaking for its urban design and housing mix—it eventually influenced the Regent Park redevelopment 30 years later. By the 1980s, an estrangement grew between her and city hall, as communities used her books to justify any major urban initiative. The radical transmuted to the reactionary.

Jane didn’t do nice—Toronto’s default emotional setting. She was cantankerous and argumentative: once you got on the wrong side of her, that was that. About 20 years ago, when I was working as an urban planner, we were on a panel together at Boston College. I was making some remarks about city planning she clearly thought rubbish—and she just interrupted me. “Joe, Joe, Joe,” she said (her squawky Scranton, Pennsylvania, accent made it sound like “jaw, jaw, jaw”). “You’re tacking nansense.” The audience agreed. After I spoke, an incomprehensible social science professor took the stage. Jane wasn’t fond of academics—she didn’t think they knew much—but to make matters worse, he kept addressing her as Professor Jacobs. “Staap calling me prafessa,” she barked. “I barely graduated high school.” He and I both slunk offstage in shame, clutching our notes.

Jane was a formidable persona given to great cape-like dresses and sandals, a triangle of white hair over that famous aquiline nose. And those glasses! The whole effect was bird-like, a big bird, a wise old crow. In her later years, she would brandish a great curling ear trumpet, decorated in paisley, swishing it around in front of anyone she spoke with.

A couple of years before she died in 2006, I gave her a lift home from a dinner at the architect Eb Zeidler’s house in Rosedale. She was in her 80s, widowed and having a bit of trouble moving around. We were almost home when, stopped at a light, she leaned over.

“Jaw. Jaw. Tell me. Do you have any secret vices?” Perhaps a bit of a come-hither look. Was I imagining that? She leaned a little closer to my ear. “ ’Cause I do.”

I pulled over, nipped out to the corner store and got her a couple of packs of Benson and Hedges menthols, which she then cleverly concealed about her person. That’s my last memory of Jane, leaving her on the porch of her Annex home, as she turned to nod goodbye with a look of mischievous teenage complicity.

What a woman, what a presence, what a wake-up call she gave us as a city. She was the most passionate, forthright and unrestrained public figure I’ve ever known. And this month, to mark what would have been her 100th birthday, Toronto Life has assembled a photographic journey through Jane Jacobs’s Toronto. I still see her everywhere.

With city controller Margaret Campbell and councillor Ying Hope at a meeting about the Spadina Expressway, where Metro chairman Albert Campbell (no relation) fought for construction to continue. Jacobs and her supporters eventually convinced incoming Ontario premier Bill Davis to withdraw his support for the Expressway in 1971—and the project was doomed.

At her wedding to the architect Bob Jacobs in Scranton, Pennsylvania. The couple met earlier that year at a party Jane and her sister, Betty, had thrown in their Greenwich Village apartment. Bob was working as an aircraft designer, and Jane as a writer of patriotic marketing material at the U.S. government’s Office of Wartime Information.

In her office at Architectural Forum magazine, where she worked as a writer and editor covering schools and hospitals. Her architect husband, Bob, taught her to read blueprints and plans.

Jacobs’s graduation photo from Central High School. After she graduated, her parents offered to pay for university—and Jane declined. “I was so damn glad to get out of school I couldn’t even think of going to college,” she said later.

With Bob and their then-12-year-old daughter, Burgin, at a Vietnam War protest in Central Park. Jacobs moved to Toronto so her two teenage sons could avoid the draft.

At a press conference at the Lion’s Head restaurant in Greenwich Village. When New York master planner Robert Moses announced his intent to build an expressway through the middle of the Village, Jacobs led a successful citizen movement to stop the development.

With ex-mayor John Sewell at a book signing. Together, they fought the Spadina Expressway from 1969 to 1971, and the demolition of the Dundas and Sherbourne neighbourhood in 1973.

With then–mayoral candidate David Miller in council chambers. Miller consulted with Jacobs throughout his campaign, and she supported his opposition to an Island airport bridge.

At the Royal York with activist June Callwood, who had just received the Jane Jacobs lifetime achievement award from the Canadian Urban Institute.

When opposition to the Lower Manhattan Expressway hit its peak, some of Jacobs’s supporters stormed the stage at a public hearing, and Jacobs was arrested for inciting a riot. Thousands protested the charges.