“You’d be surprised at the number of people out there”

Andrew Sherriff is a Toronto-based musician who performs under the name Wayley. In 2019, he took up winter lake surfing and, during the pandemic, went viral on TikTok for posting videos of his icy escapades (and impressive icicle beards). Here’s how he got into the sport. —As told to Haley Steinberg

In 2013, I moved from Toronto to Australia to get into the music scene there. I’d always wanted to try surfing, so a few days after I arrived, I bought a board and got into the water. The next year, back in Toronto, I bought a surfboard off Kijiji and drove around to a couple of lakes outside the city, but I didn’t have much success. Surfable waves are often harder to find in the summer.

In 2018, I was recording an EP and working with a new producer, Tal Vaisman, who grew up surfing in Israel. We both missed being in the water. One day, in October of 2018, Tal decided to just go for it: he rented some gear and went out to Lake Ontario to give it a try. He said it was awesome, that the wind and waves were incredible.

The following year, I decided I needed to try again. I rented a wetsuit from a surf shop, but my surfboard was way too short. I couldn’t even paddle out past the shore break to the spot where you wait for the waves to come in. I didn’t catch a single wave that day, or for a few months after.

At the start of the pandemic in March of 2020, Tal and I were sitting around with nothing to do, so we started obsessively watching Ontario forecasts. At the first sign of any little ripple, we’d hop in the car and drive two or three hours to Lake Huron or Lake Erie to catch a wave.

When I’m surfing in cold weather, I’m constantly changing into different gear depending on the temperature. In the dead of winter, I’ll wear a six-millimetre wetsuit—in neoprene terms, that’s super-thick—plus boots, mitts, a hood and a base layer. I can usually last about four or five hours like that. Surfing as the snow is coming down, or hiking through the bushes to a surf spot in a foot of snow, makes me feel calm and serene. There’s really nothing else like it.

Last winter, when everyone was stuck at home on their phones, TikTok was blowing up, so my manager suggested I use the platform to push my music out. I started filming goofy videos of myself after coming out of the water post-surf with a full beard of icicles. The videos went from getting 20,000 views to over one million. Citytv and Breakfast Television reached out and asked me to play some music and talk about surfing on their shows. I played one of my new singles right on Woodbine Beach, near one of the big surf spots. Now I get thousands of comments from people who want to get out there and try surfing. Occasionally when I’m out on the water, someone will say, “Hey, you’re the guy from TikTok.” Word definitely gets around. 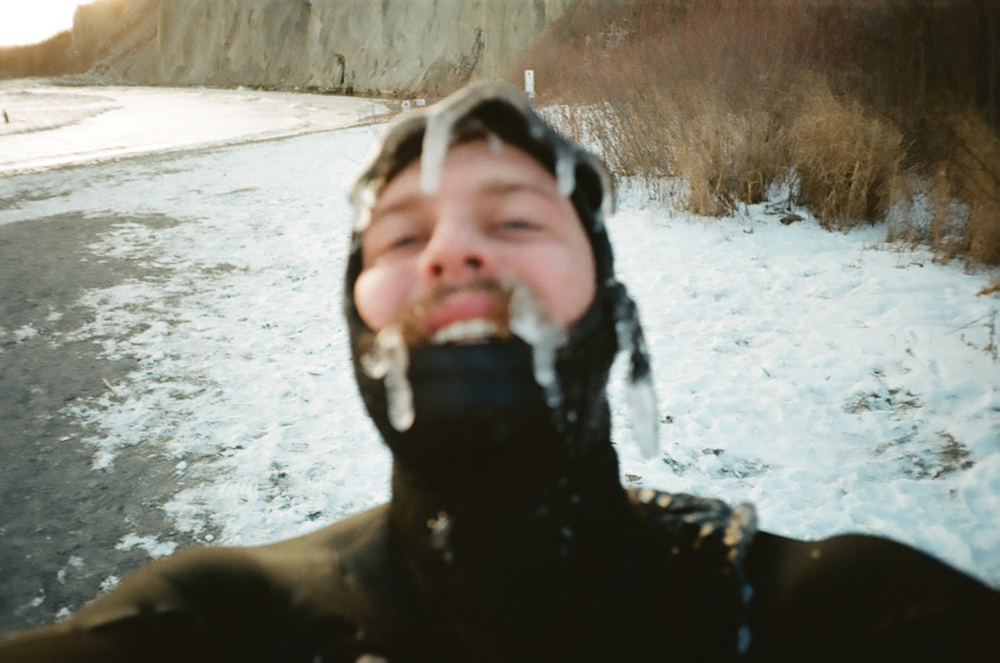 The lake surfing community in Toronto is awesome—everyone knows everyone. In good weather, there might be 40 people out at the same spot. In the winter, the crowds thin out a bit, but you’d be surprised at the number of people who stick it out. And everyone is incredibly friendly. It’s a completely different scene than what you find in places like California or Mexico. There, if you hop on someone’s wave or you’re not a local, people can get a little rough and edgy. Here, it’s much more inclusive.

Over the past two years, surfing has had a huge impact on both my life and my music. It opens up a whole new part of my brain. I’ve also had more opportunities to combine my two passions: last year, my band and I livestreamed a show for jack.org, a youth mental health organization, at Surf the Greats, a surf shop near Dundas and Carlaw.

I’ve been surfing all year, but I’m stoked for this winter. I’ve already had some great days out on the lake in the cooler weather—we call it “opening season.” Most people are bummed when they hear there’s a winter storm coming. When I hear that, I can’t wait to head out the door at 4 a.m. and get into the water.

This story appears in the January 2022 issue of Toronto Life magazine. To subscribe for just $29.95 a year, click here.