I started university at 12. Now, at 18, I’m thinking about getting my PhD

I started university at 12. Now, at 18, I’m thinking about getting my PhD

When most kids my age were still in middle school, I started taking classes at the University of Alberta. When U of T offered me a fellowship for graduate school, I moved across the country to continue my studies 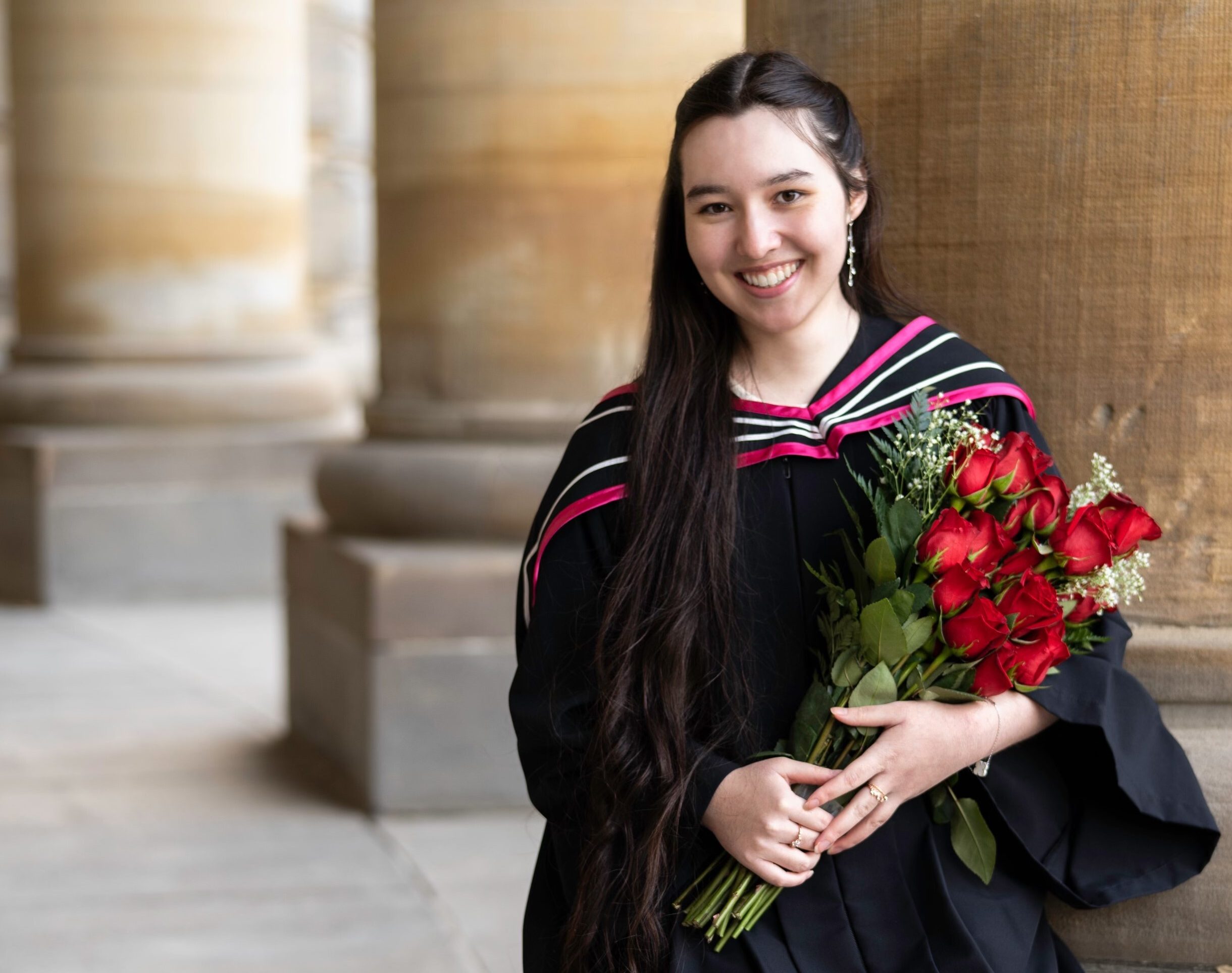 I was born and raised in Edmonton, the middle child in a family of three girls. My sister Sophia is three years older, and Rosalina is four years younger. Both of my parents are lawyers.

In 2007, when I was three years old, my mother decided to stop practising law and homeschool me and my sisters. My parents thought it would be a good way for us to pursue our interests instead of following a traditional school curriculum. We were really interested in the arts—music, singing, piano, creative writing, painting. We especially loved storytelling and world-building.

By 2015, my sisters and I were all being homeschooled. On a typical day, we would wake up, splay our textbooks open on the kitchen table and learn together as a family. It was great. We learned some of the standard curriculum, like math and science, while also covering a range of other subjects, like Latin and French. Our extracurricular activities included piano, singing, swimming, basketball and soccer. I never really felt like I was missing out on the regular school experience. I enjoyed learning at home with my sisters.

In 2016, when she was 14, Sophia decided to take a Ukrainian language course at the University of Alberta. Our family has always had an interest in different cultures and languages. My father is obsessed with genealogy, and we have a diverse background—we’re part Polish, Korean, Irish, English and Mi’kmaw. (We didn’t know it at the time, but we’re also part Ukrainian.) The university lets anyone register for open-studies classes, regardless of age or academic merit. Sophia had no previous classroom experience, but she excelled in her Ukrainian course, receiving an A-plus.

Whenever Sophia came home from class, she raved about university. It sounded awesome—learning in a high-level academic environment, workshopping ideas with other students. The idea of joining her and studying together was super appealing. So, the next semester, in early 2017, at age 12, I took the second part of the Ukrainian course with her. Sophia helped me prepare; we tested each other and used online resources like Quizlet to study together. I wasn’t intimidated by going to a college campus with older students. I’m an extrovert, and I always had my sister by my side, so it all felt pretty natural.

From that point forward, Sophia and I kept taking courses together—everything from Canadian history to Latin American studies to translation studies to material culture—until, in the summer of 2018, we had enough credits to transfer into a bachelor of arts program. I felt like I was embarking on a thrilling adventure. Even though I was only 13, my age didn’t feel like a huge deal at the time.

Life as a university student was challenging but exciting. We continued living at home, about a 25-minute drive from campus. After class, we went to the library to study, chatted with our professors and hung out with other students in the Humanities Centre. Waclaw Osadnik, a professor of literature and translation studies, and Natalia Pylypiuk, a professor of Ukrainian language and literature, were both very encouraging in our undergraduate experience, and we’re still in touch with them today. Two years later, in 2021, we both graduated with honours, each receiving a BA in modern languages and cultural studies. And we each earned a 4.0 GPA.

Sophia and I wanted to continue our education, so we looked into graduate degrees at the University of Alberta and the University of Toronto, which had a strong languages program. My sister and I both received the Canada Graduate Scholarship, given to students with high academic standings during their undergrads, worth $17,500 each, which would help offset the cost of studying away from home. Then U of T offered each of us a fellowship, which would cover our tuition and living expenses. That sealed it. We were headed across the country to Toronto for a nine-month MA in Slavic languages and literatures, pursuing our interest in different cultures.

In September 2021, my whole family moved to Toronto (except for my dad, who stayed behind in Edmonton for work). We had the flexibility to do it because Rosalina was still being homeschooled. Plus, I was only 16, which would have been pretty young to move across the country with only my teenage sister. We rented a place near Kensington Market. In the early days, we explored the city like a family on vacation. It was the first time I’d ever spent in Toronto, and I really liked it. It felt like a bigger Edmonton. We ate from the street vendors in Kensington Market, visited the Ripley’s Aquarium and went to the Royal Agricultural Winter Fair. My dad grew up in Burlington, so we drove out there and visited his childhood home.

When it came to school, we were very diligent even though our schedules got crazy sometimes. My sister and I took four classes per semester. In the mornings, my mother would drive Sophia and me to Alumni Hall, just east of Queen’s Park, where we had most of our classes. After school, we would come home, eat dinner and then study until one or two in the morning. We did a lot of writing, mainly essays and book reviews. For our Diaspora and Transnational Studies course, we had to read an entire book—usually around 300 pages—for each class. In another class, I read Tolstoy’s work and analyzed it from a feminist perspective. It was fun to be able to take a bunch of different courses, like Jewish Polish history and the medieval Mediterranean, to broaden our cultural perspectives.

My sister and I liked to sit together near the front of the class, which made it easier to catch everything the professor said. Our classmates ranged in age from their late 20s to early 30s, but we didn’t find it unusual. By that point, we had a lot of experience studying alongside older students. We considered them our academic peers. Plus, nobody ever asked about our ages or said we looked young.

During separate semesters, Sophia and I worked as teaching assistants in a Polish class. There were 14 students in the class, all older than me. Twice a week, we helped teach them by grading homework, hosting peer review sessions and running class exercises. We tried to get creative with the activities. For one exercise, we had the students create a Polish restaurant menu and role-play a waiter and a customer going through the process of ordering. We loved making grammar games and preparing the students for exams. The class was run by a PhD student named Benjamin Bandosz, who let us play a big teaching role. He was one of the nicest people we met at school.

We finished our classes in April 2022, and in November, Sophia and I walked the stage at convocation, smiling and looking at each other the whole time. By that point, I had just turned 18, and Sophia was 21. It was a big moment for our family. My mom and dad stood up in the audience and cheered for us. We even hired a photographer to document the celebration. Afterward, we went to the Royal York Hotel for a nice family dinner.

Shortly after graduation, our dad got in touch with the CBC and told them our story, and they published an article about us. A lot of our classmates and professors, from both U of A and U of T, reached out to congratulate us. They hadn’t realized and couldn’t believe how young we were. Now, we’ve moved back to Edmonton, and everyone is asking us what’s next. Rosalina, who’s 14, is looking at doing her undergrad at U of A. Sophia and I are keeping our options open. We’ve been collaborating on some art projects, singing songs together, writing poetry and working on a book. I’m also interested in teaching, and getting a PhD is an option. I’m going to talk to some people in academia and try to figure out the best way to use my education to help others. For now, the possibilities are endless.