It all started with Beyoncé and a dare. In 2012, when I was 20 years old, my friends and I were raising money to buy winter kits for kids living in Syrian refugee camps. To raise extra money, we announced to our followers on Facebook and Instagram, who were mostly friends and family, that people could dare us to do something in exchange for a donation. A friend of a friend dared me to sing “If I Were a Boy” by Beyoncé and post the video on YouTube and said they’d donate $300. Of course, I did it, even though I can’t sing. Most of my YouTube followers at the time were just friends and family, but to my surprise, the video got 1,000 views within a couple of hours. Some people even commented that I should start making more of my own content. That’s when I realized I could do something creative on the platform.

But, within a year of posting a couple of videos each month, I quit. I had gained about 50,000 subscribers and had a couple of viral videos with a few hundred thousand views, but I lost the motivation to keep going. I put that ambition on hold while I picked up some odd jobs. I worked for my dad’s company, selling paper goods, and then in sales before getting a job at Life Time Fitness. Then Covid shut everything down. The whole time, in the back of my mind, I worried I’d regret it if I didn’t give content creation another chance.

With no work, I decided to throw myself into TikTok, which was then the up-and-coming social media platform. I was stuck at home in Toronto with my parents and siblings, and I figured I would try making some short videos. I had made videos for YouTube and Vine in the past, so I felt like I had a bit of an advantage on TikTok. I knew I’d have to prepare for negative comments, but I also knew that the platform could be life-changing. It would give me a chance to do something that I love every day and opportunities to meet new people and make new friends.

My early videos focused on my family and on Arab culture. I wanted to show off my big Arab family, so I made some videos with my siblings, showing my three brothers and me on the hunt for food and how protective we are of our only sister. I also made videos during Ramadan of me and my siblings making traditional desserts with our mom and counting down the seconds until we could break our fast. Arab culture isn’t as central to my videos now, but in the beginning, I wanted people to know who I am. I take pride in being Canadian and Syrian.

It was this blending of Western and Arab culture that led to my first viral moment. I wanted to create something with friends who perform Zaffe, a type of celebratory music using lots of different instruments and vocals, at Arab weddings. I thought it would be cool to recreate trending TikTok songs in the Arab Zaffe style. We recreated a version of “WAP” by Cardi B and Megan Thee Stallion, and it went viral, racking up nearly two million views. Someone commented on the video asking us to do “The Chicken Wing Song,” which was trending on TikTok at the time. It went super viral.

The video got several million views, and I gained one million new followers in a month. The coolest part was that people started using the sound we created in their own videos, and it kicked off a trend on TikTok. In all, nearly one million people used it, including celebrities like Liam Payne and Jason Derulo. It put me on the map. People started to know who I was, and I gained more followers. With more followers, brands like Bang Energy and Takis started reaching out to work with me. It was kind of an “Aha!” moment. It gave me confidence in my creativity and made me think, I have what it takes to do this.

Soon after that, I took a leap of faith. When gyms were reopening after the second lockdown, in July of 2021, I told my boss at Life Time Fitness that I wouldn’t be coming back so I could focus on TikTok and growing as a content creator. The brand partnerships I had gotten would see me through the year. I wasn’t sure if my TikTok popularity would last in the long term, but I wanted to continue the journey. I knew that, if I wanted to make it big, I had to keep pushing and putting in the effort. And it paid off—I continued to gain followers and new opportunities, including with Axe, Emirates airlines, the Toronto Raptors and Nintendo.

In August of 2021, I started my signature “Make Me” series, where I hit the streets and ask people to make me laugh, cry or cringe in exchange for money. I got the idea from a similar video on TikTok, but it was just a one-off, and I wondered what would happen if I held up a sign that said, “Make me laugh, take $20.” I went to Yonge-Dundas Square, held up my sign and gave people $20 if they were able to make me laugh. The first video was a big hit, and I’ve continued to make them around the world, including in LA, Lebanon and Dubai. I love that it allows me to go out and connect with people wherever I am. Since making me cringe is more difficult than making me laugh, I pay $50 to those who manage to do it. Making me cry is the hardest, so for that I pay $100. One woman who succeeded told me that she had been in an abusive relationship and had given up on her dream of having kids because she didn’t want them to grow up with that abuse. She eventually left that relationship and ended up getting back together with her high school sweetheart. Then she told me a secret she hadn’t shared with anyone else—she was pregnant.

In January of 2022, Emirates airlines gave me the opportunity to go on a sponsored trip to Dubai to create content, which is one of the biggest things that’s happened to me because of my TikTok. I grew up flying the airline in economy, and I never thought I’d one day be flying across the world in business class. On the way to Dubai, I made a video showing my experience travelling with the airline. On the way back, I did something even more fun: I made one of my “Make Me” videos with the cabin crew, who made me laugh at 40,000 feet in the air. People loved it.

Similar to how I showcased my culture early on, I’ve always tried to be myself on TikTok and show my followers who I am. This means I’ve talked a lot about my anxiety on the platform. I’m open about it—I want people to know that I’m not always happy and excited. When I talk about anxiety, my DMs get flooded with people sharing their stories of dealing with anxiety and mental illness. They’re happy that I’m sharing the realities of life and not the false portrayal of constant happiness that we’re used to seeing on social media. It feels good to show people that they’re not alone. 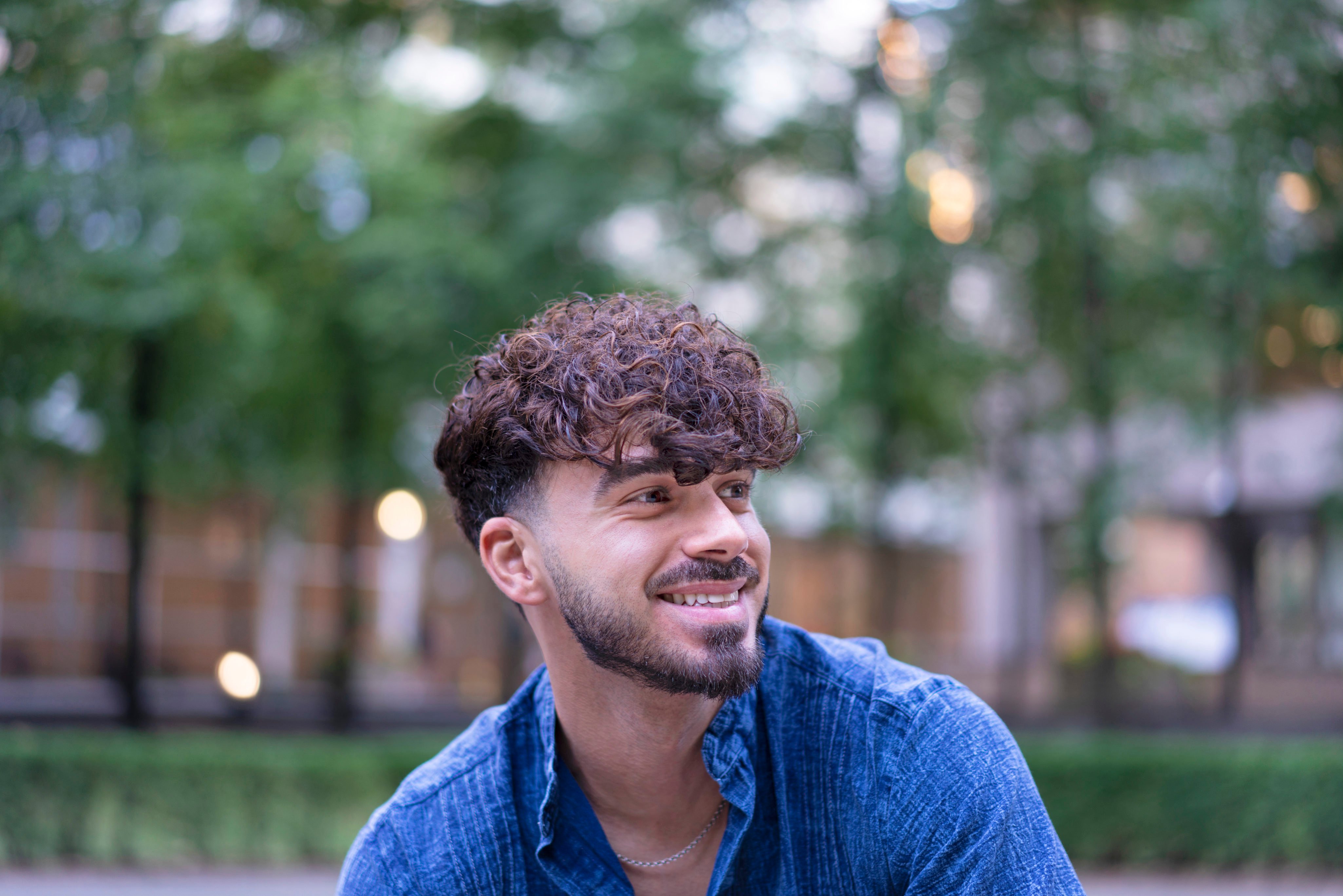 I’ve also continued to fundraise for winter kits for Syrian refugees every year. Now, I share my efforts on TikTok. Last April, I slept in a tent in my backyard for three nights and ate only what Syrian refugees living in camps would eat, which meant I would break my fast each day with just three dates and some water. I shared a video of the experience, and it helped me raise $40,000 for the cause. I realized that TikTok can be about more than just numbers and followers: I can really make a difference with my platform. In January, I even had the opportunity to go to Lebanon to help give out supplies to Syrian families living in refugee camps and see first-hand what the conditions there are like. I started the initiative on my own, but my exposure on TikTok helped me raise more funds and awareness than I could have by myself.

Social media can be all-consuming, and I’ve had to find a sweet spot to avoid burnout and stay mentally healthy. I can’t always be on. The best balance for me is having designated filming days and creating enough content for three or four days, so I can have downtime on days when I’m not feeling my best. I generally post one video a day, which is a full-time job. On filming days, I usually spend nine or 10 hours planning, filming, editing and posting. On my days off, I usually meet up with friends or spend time at the gym.

Initially, my parents were a bit skeptical and worried about me being on TikTok, but that’s completely changed. Now, they want to know what I’m working on and what video I’m posting next. My mom likes to help me film and be in videos with me. Recently, we made some TikTok videos of us baking dessert, and she got a ton of responses from her friends. She’s even been recognized out in public.

The world changes so fast, especially on social media. Having to constantly adapt is the most stressful part of the job for me. Coming up with new ideas every day is difficult, but I always believe that something will come to me, even when I’m facing a creative block. I get most of my ideas when my mind is idle, like while I’m in the shower or driving around. When an idea comes along that is sowed with doubt about how I’ll be able to pull it off, I know I have to make that TikTok. If I had listened to all of my doubts and given up when my videos didn’t turn out as planned, I wouldn’t have accomplished anything.