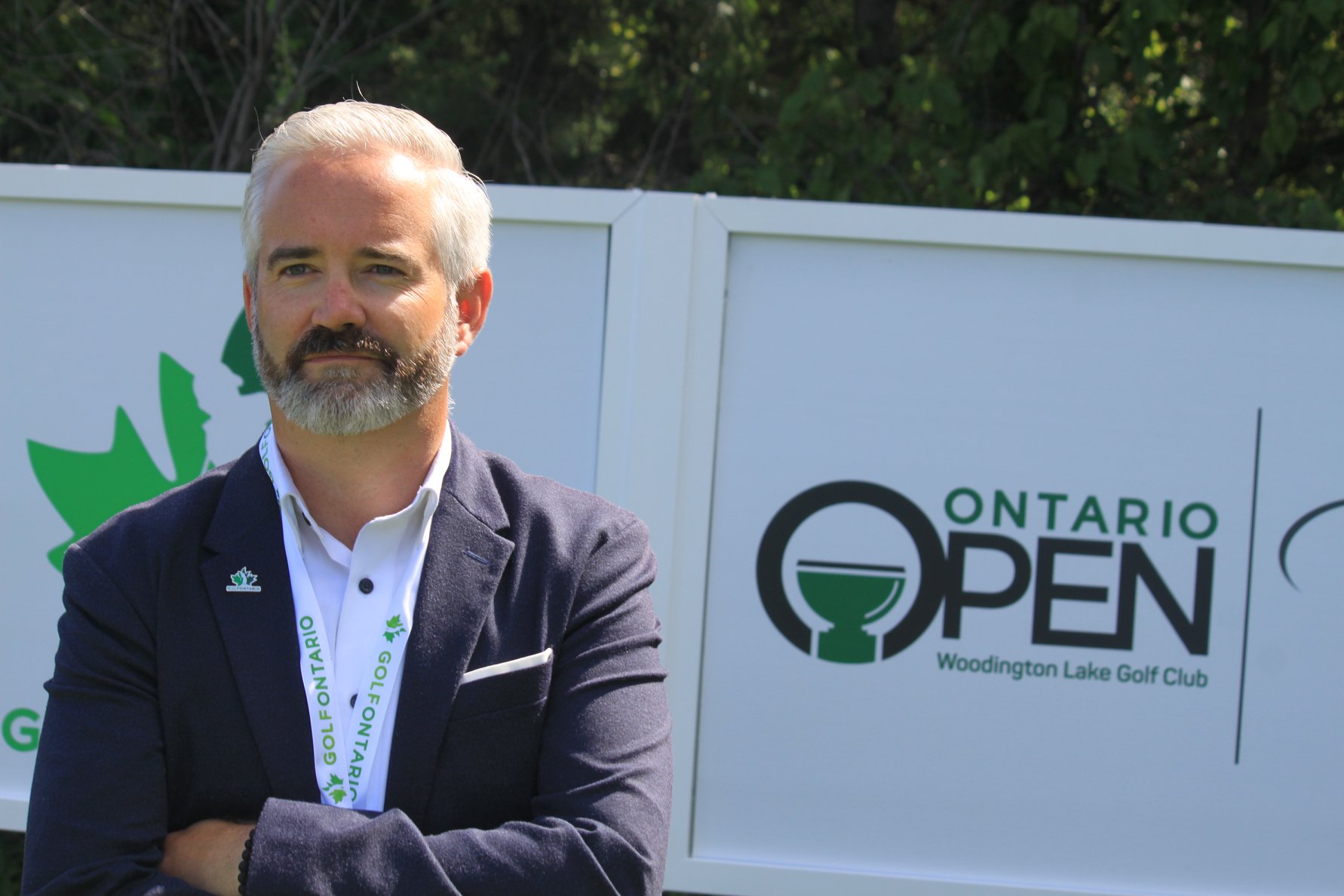 With a new #LetUsPlay campaign, Ontario’s golf community is pressing the province to reconsider the current restrictions that are keeping 1.8 million tee-timers off the links. Last month, Ontario shut down golf courses along with tennis and outdoor basketball courts, among other outdoor recreational facilities. A baffling move, according to Golf Ontario’s executive director, Mike Kelly, who is hellbent on getting golfers back on the green by May 20. Here, he explains why his sport is ideal for the current moment, what he thinks of the club that stayed open as a form of protest, and why Ontario golfers aren’t just a bunch of Izod-clad one-percenters.

Based on this week’s updates from Ontario’s health minister and chief medical officer, it doesn’t look like golf courses will be opening up for at least the next couple of weeks. Are you surprised? Frustrated? So angry you want to fling a five-iron?
I’ve felt all of those emotions over the last few weeks. We were hopeful that we might have heard different news this week, but there have also been positive developments. On Tuesday, Ontario’s Covid-19 Science Advisory Table recommended that the lockdown should continue, but that outdoor recreations should open, so we’re hoping that might give the politicians reason to reconsider. It’s been a roller coaster ride lately, and part of that is due to the rumours that we keep hearing—both good news and bad. I’m trying to stay focused on my mission, which is to channel the energy of a passionate, frustrated group of golfers and be as productive as possible.

What does that channelling look like?
That looks like lots of meetings. In the last few weeks, We Are Golf, a group of stakeholders that includes Golf Ontario, have met with the premier’s office multiple times, the Ministry of Health and the Ministry of Heritage, Sport, Tourism and Culture Industries. We have more meetings ahead. Being in the room means we have the opportunity to tell our story and clear up misconceptions or concerns.

The other thing we are working on is the new #LetUsPlay initiative, which is a way of bringing our voices together on social media. We launched last Friday and were trending number-two in Canada on Twitter for a while, so that was encouraging. What we’re saying is no different from what we’ve been saying in our meetings with government.

Can you boil it down to a sentence or two?
I can say it in three words: golf is safe. That is the message we have heard from so many different medical experts and public health officials, and it’s one of the ways in which our situation today is so different from where we were last year going into the golf season, when there was so much uncertainty. We had no idea what was happening, how long this pandemic would last. We weren’t sure what the best and safest way to move forward might be. But a year later, we have those answers. We know that by implementing some strict protocols, we can play our sport safely.

Currently, golf is categorized as an “outdoor recreation facility,” which includes tennis courts, basketball courts and the like. Would you like all of these facilities to reopen, or does golf deserve special consideration?
Based on the science, we know that outdoor transmission is rare and there is a strong argument for all outdoor activities to reopen. It’s possible that team sports are a different beast, but I know that golf lends itself to being played in a way that is safe and that can allow for social distancing. I’m sure the voices representing tennis would say the same about their sport. My job is to advocate for golf and I think we have a very strong case.

Okay, but just to play devil’s advocate: Ontario’s chief medical officer of health, David Williams, expressed concern for gatherings that can happen before or after a round of golf. Lawrence Loh has said that he believes opening golf courses would send a mixed message given that we are currently under a stay-at-home order.
A lot of experts believe golf should be not just allowed but encouraged, both as a way to get outside and because we know that there are mental health benefits. We are the only jurisdiction in the world that isn’t allowing golf right now. I think Dr. Williams was talking more generally about gatherings before or after people engage in outdoor activities. For golf, our protocols are such that golfers can arrive only 20 minutes before their pre-booked tee time and that the same people who greet golfers on their arrival are making sure that nobody is hanging around in the parking lot afterwards.

The other argument we’ve heard is on the mobility side of things: fear of carpooling and travelling between regions, which is similar to what we heard during ski season. The difference is that there are 800 golf courses in Ontario, which is close to one in every region. The data shows that in 85 per cent of rounds played, golfers are travelling no more than 30 minutes from their home, so the idea that this is promoting a lot of of extended regional travel isn’t true.

Maybe not now, but cottage season is upon us. Would you support measures that prohibit city people from golfing in cottage country?
Certainly we are willing to have a conversation, whether that means restrictions on mobility or only playing with the people in your household, which is what they’re doing in Alberta at the moment. I should emphasize that we believe we can provide a safe experience without those additional measures, but we are open to anything that allows us to be open!

Another argument against reopening golf right now is that, relatively speaking, this is not a pressing issue. In other words, if your big pandemic hardship is not being able to get out on the links, you should consider yourself lucky.
I don’t think anyone is saying that golf is the most important thing, but I do go back to what I said about mental health and providing people with a way to get outside and maybe have a bit of hope during these challenging lockdowns. Obviously I love and believe in golf and it’s my job to represent the industry, but speaking from a more personal perspective, I love to take my daughter golfing. She is 11, and this is one of the things we have in common, so it’s a great way to spend some time together and unwind. I would also say that there are some misconceptions about who we are talking about. There are 1.8 million golfers in Ontario and most of them are playing at public golf courses.

So you’re saying golfers aren’t just a bunch of Izod-wearing one-percenters?
That’s exactly what I’m saying. There are important conversations to be had about this, and Golf Ontario has recently partnered with the consulting firm Korn Ferry about a plan for diversity equity and inclusion. Changing the face of golf is an important goal, and it’s something we’re already seeing with the new golfers coming to the sport in the last year—many because their other sports have been shelved. You can’t find a starter club kit right now, which tells us a lot of people are playing for the first time.

The Bridges at Tillsonburg, a golf course about a two-hour drive southwest of Toronto, recently got a lot of attention for staying open as a form of protest. Is that something you support?
No, it’s not. We knew about their plans and got ahead of it by sending letters to the premier’s office and several other government offices making it clear that we unequivocally denounce opening in defiance of restrictions. We sent the same letter to every golf facility in Ontario, just to make our position clear. We are hoping that by building bridges and listening to everyone’s concerns, we can get to where we want to be. That said, I understand the intense frustration. From an owner’s point of view, every day that goes by is a day that golf courses should be open. We’re talking about 800 small businesses, 100,000 employees. The course around the corner from my office has had to lay off almost 100 employees and refund green fees. And that’s just over a few weeks.

The sun is finally shining. Does that make this whole situation even harder? Like, what a glorious weekend we have coming up—to not play golf.
Ha! Definitely that’s what I’ve been thinking, and I know as we move forward in the season, frustration is only growing. We’re still very much focused on being allowed to open on or before May 20. The more agencies and individuals we can get to amplify our message the better, which is what I’m telling anyone who reaches out to me: post something on Twitter, write a letter to your local MPP. With the weather getting warmer, it’s just another reason to turn up the heat!