We’ve known for a while that Kellie Leitch is a different kind of Conservative leadership candidate. She has built her public persona on a bedrock of brazen protectionism, consistently saying that, if she were to become prime minister, she would screen newcomers to Canada for “anti-Canadian values”—a stance that has earned her comparisons to Donald Trump. 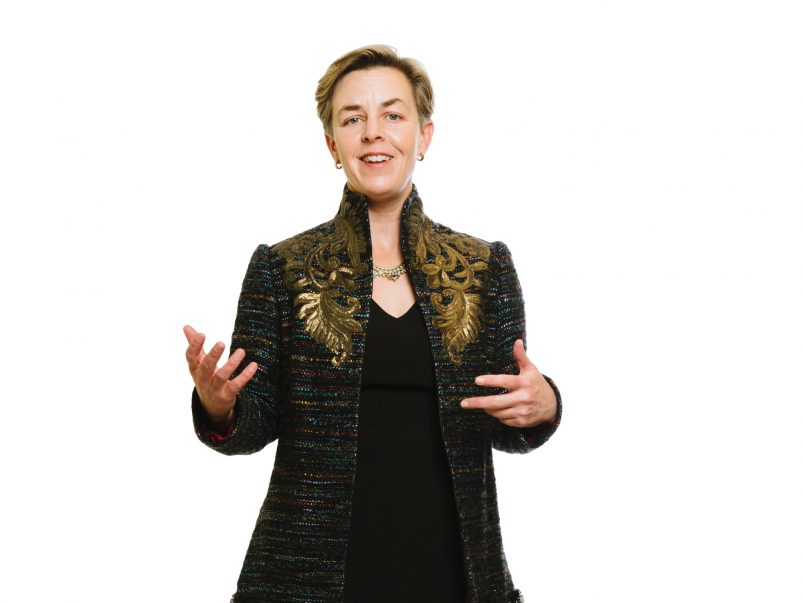 But there is at least one way in which Kellie Leitch differs from Donald Trump. He’s an inveterate showman who, for all his faults, has definite on-screen charisma. Leitch, on the other hand, just released what is possibly the most awkward online video ever produced by a federal Canadian political campaign. Leitch’s delivery is so forced that the viewer is left groping for some rational explanation for the video’s existence. Was she blackmailed into doing it? Does her videographer hate her? Has she never seen TV?

Here are the five most unmissable moments.

The ostensible purpose of the video is for Leitch to explain her immigration policy directly to the viewer, without interference from the news media. Almost immediately, though, the message is hijacked by odd and distracting camera work. Whoever was in charge of the photography decided to shoot this campaign video like a sitcom: we get multiple angles of Leitch perched awkwardly at the edge of a desk in a dimly lit office. The cuts happen without warning, for no reason.

We go from this: And now she’s not even looking into the camera: Leitch seems as though she’s trying to keep it casual. The video is a chance for her for to make a personal connection with voters in a setting where she’s not jostling for attention with a dozen other candidates.

She could have cut out awkward pauses and other signs that she was reading from a prepared script, but she chose not to do that. Periodically, she gazes off to the side, as if searching for help. Making words come out of a human mouth has never looked more difficult than it does during these eight and a half minutes. The nod to tolerance

It takes about five minutes for Leitch to get to the heart of her argument, which is that her “Canadian values” screening policy isn’t as xenophobic as the media would have us all believe. “We’re a tolerant society,” she says. “Our tolerance makes us a strong nation—a diverse nation that draws on the strengths of many people. This is the Canadian way.” And yet the explicit goal of her policy is to exclude entire groups of people from entering the country. So wait: do we vote for her if we want scary foreigners kept out? It’s a little confusing now.

Leitch lays out what she believes is a major selling point of her immigration policy: she doesn’t know how it would affect the flow of newcomers into Canada. “Our immigration system is too important to get hung up on numbers and quotas,” she says. “That is the error of past governments. So I cannot tell you what the number [of immigrants] will be.”

These days, Donald Trump doesn’t say the word “press” unless it’s preceded by the word “lying.” Leitch seems to be honing her own Canadian version of this line of attack.

“This is a common-sense policy that the media and my opponents in this race have attempted to portray as something it is not,” she says near the end of the video. “Do not listen to them. This is a common-sense solution that has the support of more than two-thirds of Canadians and 90 per cent of Conservatives.” And then, in another Trumpian echo, she adds: “I’m the only candidate who will implement it.”