Plus, insights from a cranky starchitect, the strange allure of homesteading, and more in this month’s issue

Would you judge me if I admitted I don’t care for cryptocurrency? That when conversation turns to the merits of blockchain, my mind wanders? I own nary a bit-, Doge- or WhopperCoin, which probably explains my apathy. At the same time, I can appreciate the appeal of keeping bankers’ fingers out of one’s finances. When you consider the hefty fees and multifaceted interferences of conventional banks, crypto does sound awfully enticing. But here’s the rub: when was the last time your bank account got hacked and you lost your life savings?

That’s the crux of this month’s cover story, “The Case of the Missing $46 million,” written by investigative reporter Ethan Lou and edited by my colleague Luc Rinaldi. Lou, who got his start as a crime reporter, literally wrote the book on bitcoin (Once a Bitcoin Miner). That skillset made him the obvious choice for the assignment. The saga began in February of 2020, when a wealthy Los Angeles businessman named Josh Jones, who had made a fortune in bitcoin, checked his account. Someone, somewhere, was draining the equivalent of the GDP of the island nation of Tuvalu. That someone? Police believe it was a teenage tech wizard from the GTA. 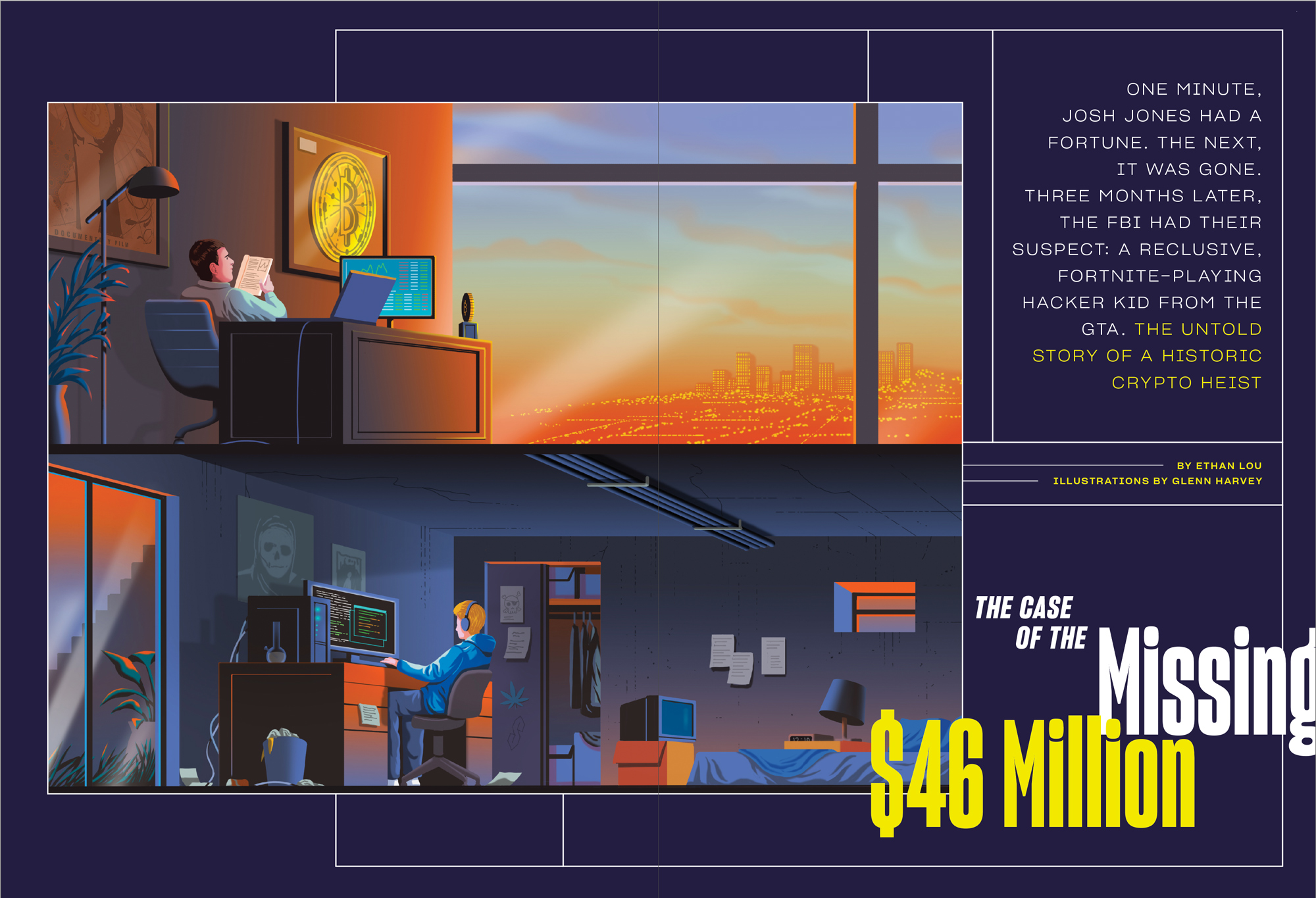 Bitcoin is often thought to be untraceable, since it’s stored in accounts that get assigned a string of random numbers and letters rather than names and addresses. But there are breadcrumbs, and last year, police followed them to an address in Mississauga. Inside, their suspect had been enjoying the view from atop his bitcoin mountain: video games, a lot of takeout and a future rich with opportunity—or so it appeared. Lou’s piece is an examination of the upsides and down of decentralized currency, and if a story about crypto gets my heart rate up, yours is bound to spike, too. 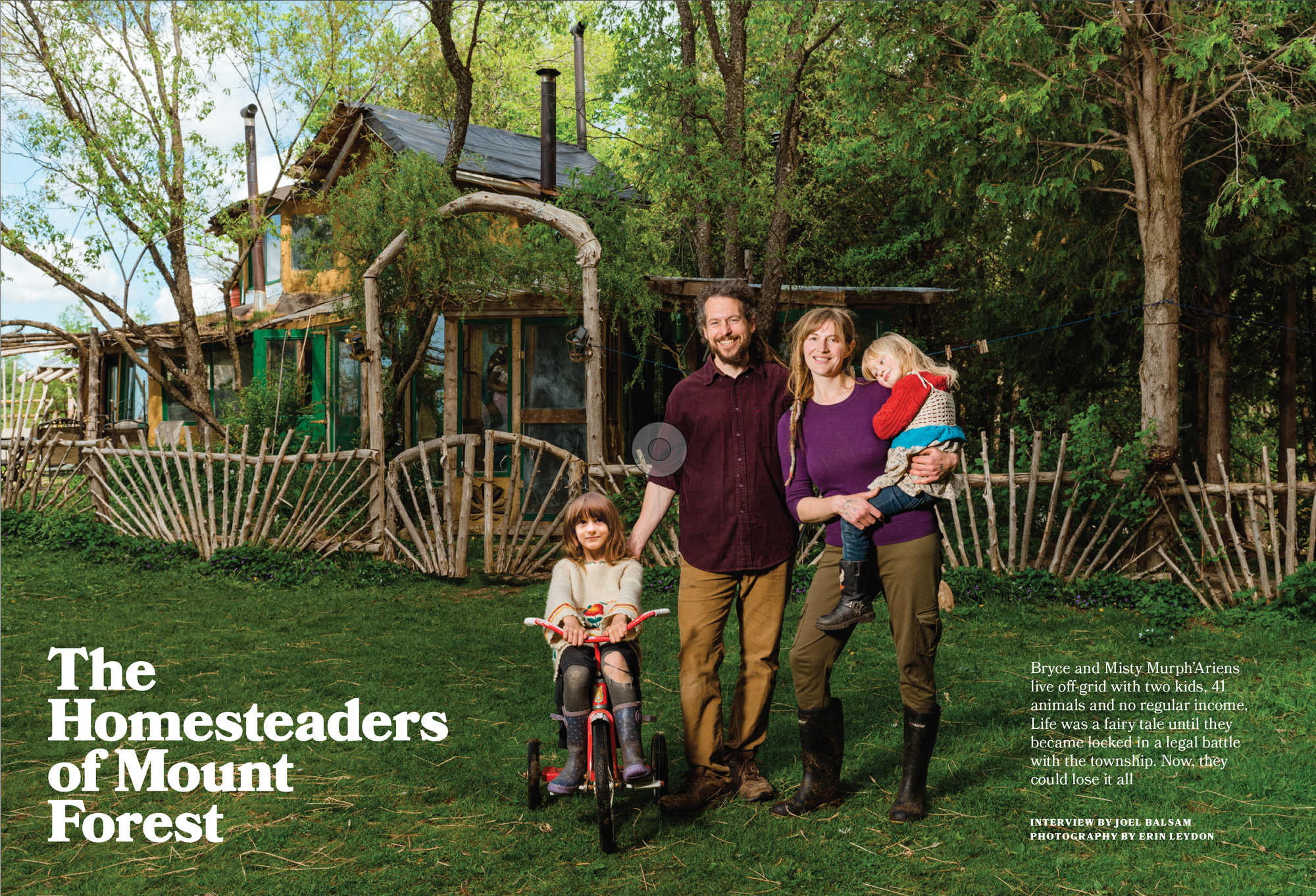 Where Lou’s yarn is a digital odyssey, “The Homesteaders of Mount Forest” is the stuff of brick and mortar—or rather clay, sand and straw. The writer Joel Balsam introduces us to Misty and Bryce Murph’Ariens, a couple of hardy, DIY types who grew disenchanted with the rat race, bought a plot north of Toronto and erected their dream home out of cob for less than $1,000. It’s an urbanite’s fantasy to find housing at a discount these days, much less to do it for three figures. But the homesteaders soon ran headlong into the jaws of the municipal bureaucracy, and their future is now uncertain. The piece goes live next week, so watch for it on our home page and social media channels.

In early July, you’ll find a candid longform interview, conducted by the journalist Stéphanie Verge, with famed architect Frank Gehry. He knows the twists and turns of bureaucracy all too well. The good news is that Forma, the ambitious residential project he’s been trying to get built for more than a decade, is finally a go, and the first of its two towers will break ground at King and Duncan soon.

If the July issue has a theme or message, it’s this: idealism and reality often clash. That’s true in the topsy-turvy world of cryptocurrency, off-the-grid living and the pursuit of daring architecture in a dense city. I hope you’ll enjoy reading these features as much as we enjoyed putting them together.