Editor’s Letter: A half-century of hilarity from the comedic geniuses at Second City

Editor’s Letter: A half-century of hilarity from the comedic geniuses at Second City

Martin Short, Andrea Martin, John Candy, Catherine O’Hara, Rick Moranis and others gleefully lampooned the inner hoser in each of us. Along the way, they somehow became the most influential comedy group in history

Two truths became apparent as I was reading this month’s cover story on Second City Toronto. First, that Canada is the funniest nation on earth, and second, that Toronto is the funniest city therein. For proof, consider the auspicious spring of 1973, when a collection of charming misfits named Eugene Levy, John Candy, Dan Aykroyd, Jayne Eastwood, Valri Bromfield and Gilda Radner wandered into an audition room in a Yorkville church.

These kids were not cool by traditional standards. But it takes gumption to perform extemporaneous make-believe in front of strangers. To expect money in exchange requires a whole other level of swagger. The cast of Second City Toronto, as they became known, were smart, zany and hell-bent on getting their audiences to double over with laughter. They were subversive too, stuffing cultural commentary inside goofball characters to lampoon icons, celebrities and the inner hoser in each of us. In tame 1970s Canada, this was new, and it was revolutionary.

Still, for a while, the whole enterprise reeked of flop sweat. The audiences were thin and the financial rewards thinner. The cast, however, was having too much fun to care. As Dave Thomas says in our rollicking oral history—which marks 50 years since it all started—he gave up a $70,000 salary in advertising to make $145 a week clowning around with his friends.

By 1975, the troupe had achieved enough success that Saturday Night Live creator Lorne Michaels (a Toronto native) plucked some of the stars from Second City, which launched its own show, SCTV, in response. The latter was wackier and creatively freer, and the critics swooned. SCTV won the Emmy for comedy writing two years in a row, an occasion that Toronto Life marked with a cover story, “The Inner Networkings of SCTV,” in October of 1983. 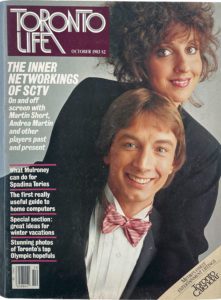 We all know what happened next: SNL survived and thrived while SCTV withered and died. One by one, its best talents migrated to the US. But that’s no tragedy. SCTV’s groundbreaking schtick established a north-to-south pipeline of funnypersons that runs thick as crude today. Norm Macdonald, Jim Carrey, Mike Myers and The Kids in the Hall are all in SCTV’s debt. So are Samantha Bee, Will Arnett, Gerry Dee, Michael Cera, Dan Levy, Mae Martin and Nathan Fielder (a former 22 Minutes correspondent), among many others.

What’s so funny about Canada? Dan Aykroyd thinks the secret lies in the contradictory blend of English and American influences. Malcolm Gladwell postulates that our comic sensibility is propelled by a sly anti-American hostility. Others, like Mike Myers, suggest that our self-effacing comedic impulses are at least partly informed by a perceived inferiority to the US—as if there were a wild party raging downstairs to which we weren’t invited.

I like to think it’s the opposite: that our comic geniuses possess both the confidence and the perspective to see above it all without thinking they’re above it all. They’re proud but not so enamoured of themselves that they can’t self-satirize now and again. After reading our piece, you might develop your own theories. Then again, perhaps it’s better not to. As the icons we spoke to would attest, the more one analyzes comedy, the less funny it gets. Instead, sit back, dig in and enjoy.

Malcolm Johnston is the editor of Toronto Life. He can be found on Post.news at @malcolm