What you’ll find at the luxurious new Yorkville space, from sleek design to a champagne vending machine 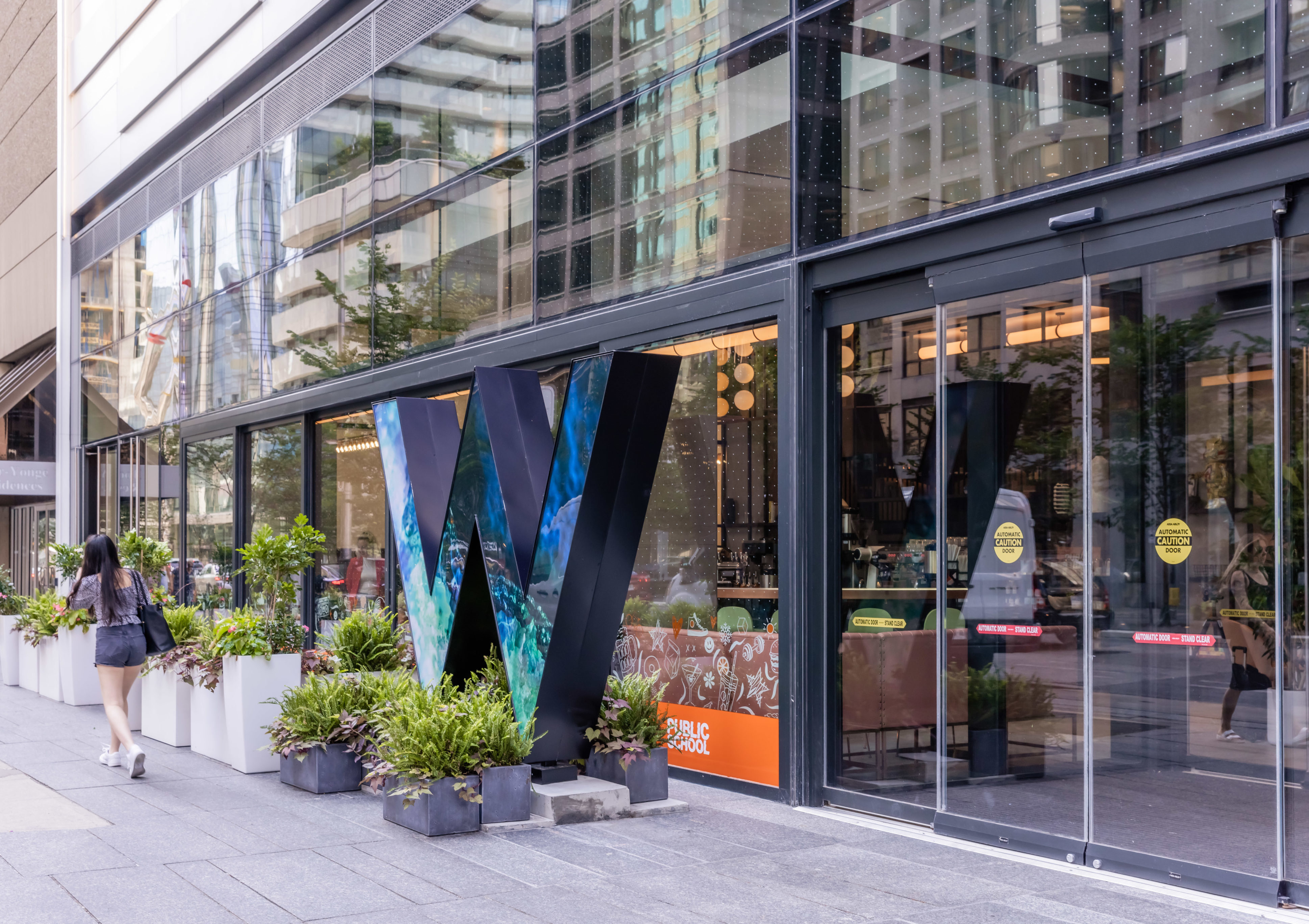 When the first W Hotel opened in New York, back in 1998, it was a trailblazer in the lifestyle hotel space: fun and funky in a time of beige and button-ups. Now, a quarter century and 68 Ws later, the brand has finally made its way to Toronto.

The exterior may be dated—an 11-storey brutalist stack of concrete that previously housed a standard issue Marriott—but after three years of to-the-studs renos, the interior has been entirely modernized. Montreal-founded design firm Sid Lee oversaw the nearly $40-million makeover, which alternated between doing away with the space’s sharp angles (think curves, curves and more curves) and embracing the building’s architectural heritage.

Instead of stepping into a lobby off Bloor Street, guests enter via Public School, a contemporary vegetable-forward restaurant with a café component. “We’re a very social hotel, and our spaces were designed to foster community. We want locals and tourists alike to enjoy our amenities,” says Brian Weston, the hotel’s food and beverage director. 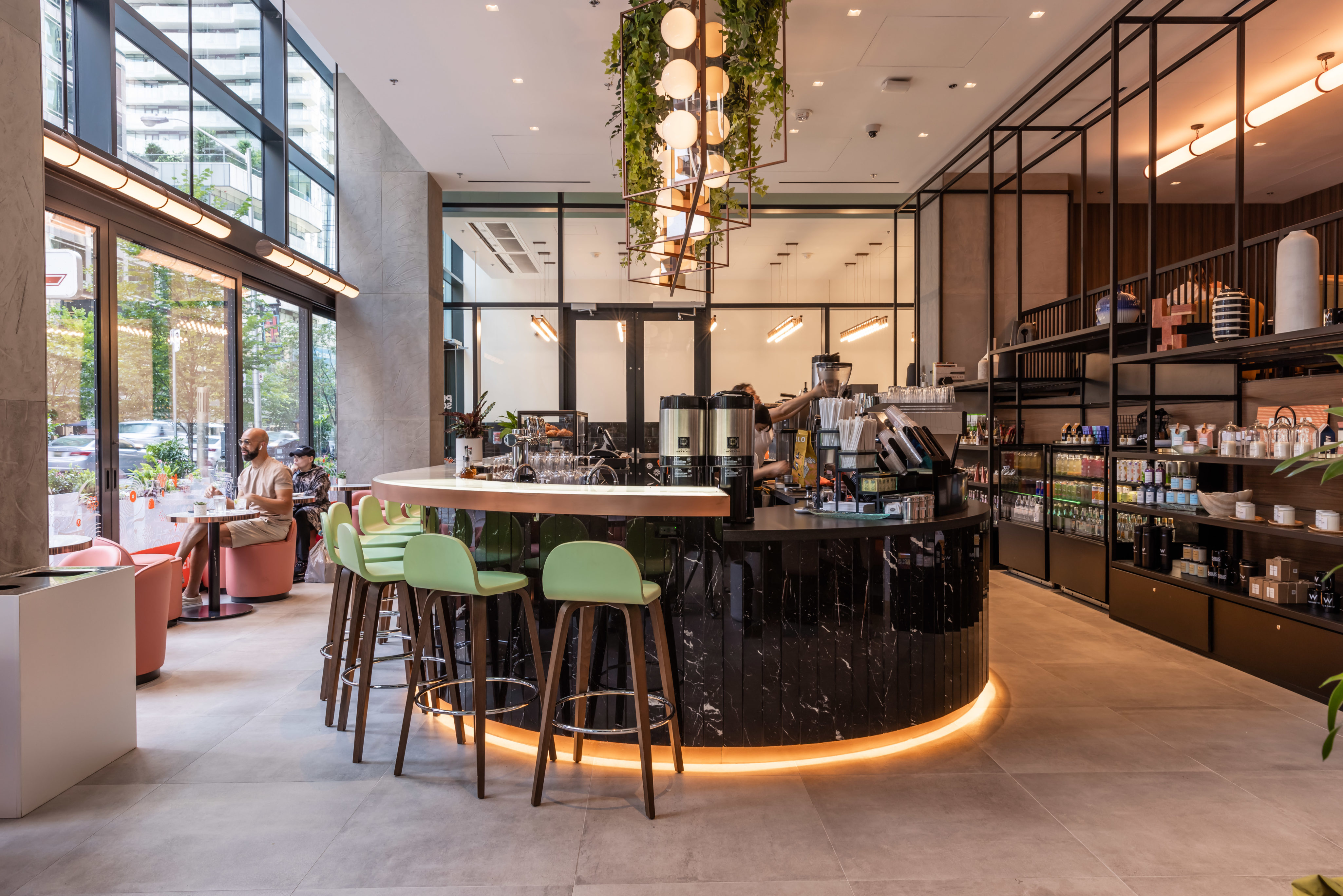 You won’t find the lobby on the ground floor. Instead, guests check in on the sixth. There, you’ll find what the W refers to as “the Living Room,” or a lobby in common parlance. The 5,000-square-foot, three-storey glass box atrium is where concierges dole out touristic tips, the laptop set plugs in at one of the many communal tables and visitors socialize while a DJ spins nightly. 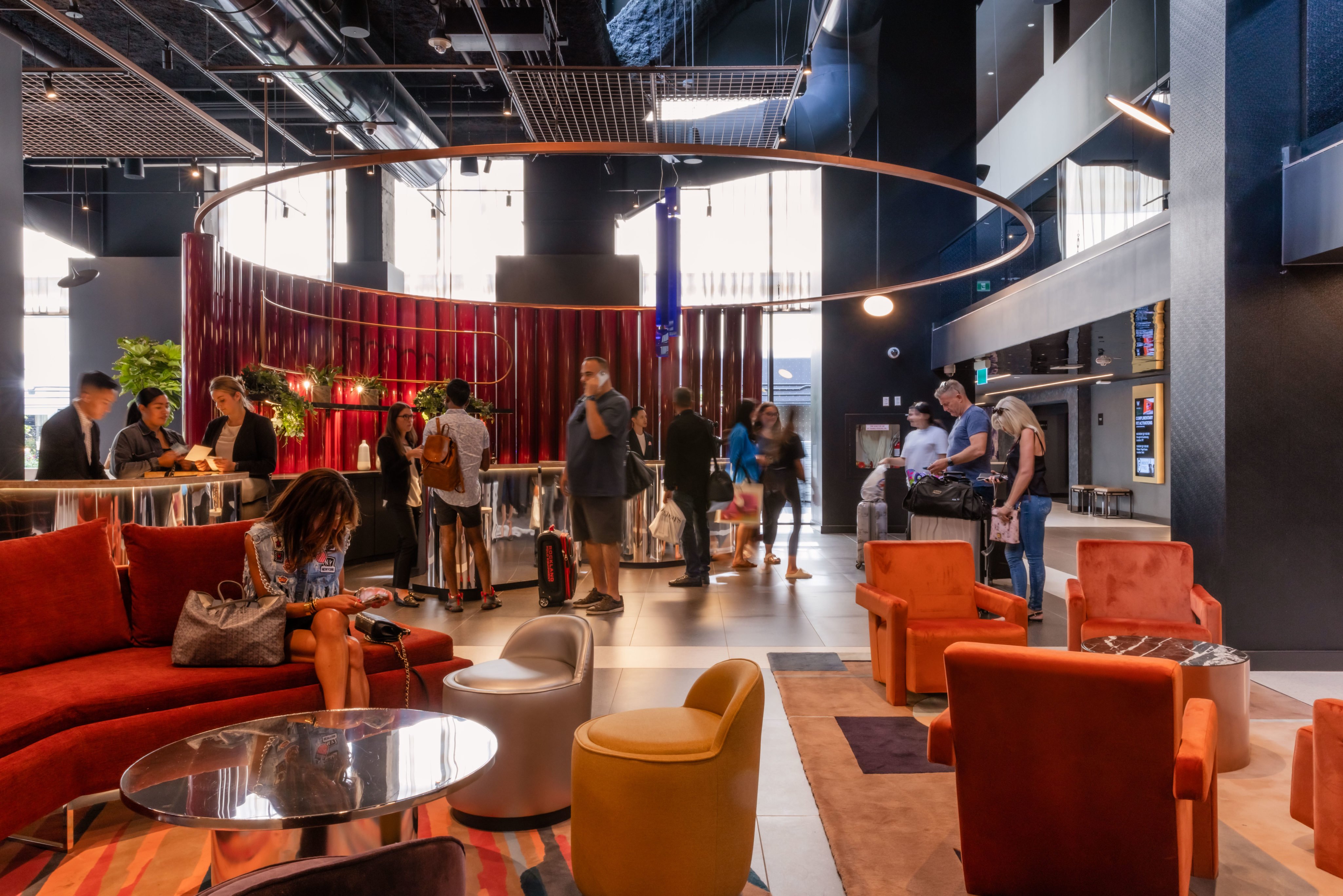 Music is central to the W’s identity: the brand has an in-house music label and hosts music festivals. And, in Toronto, it even has a recording studio, one of only five across W Hotels worldwide.

In the Living Room, Sid Lee’s predilection for the circular is on full display. The 24-seat bar, the giant acrylic light fixture, the flickering fireplace and even the tubular PVC room dividers and sofas are all angle-free. 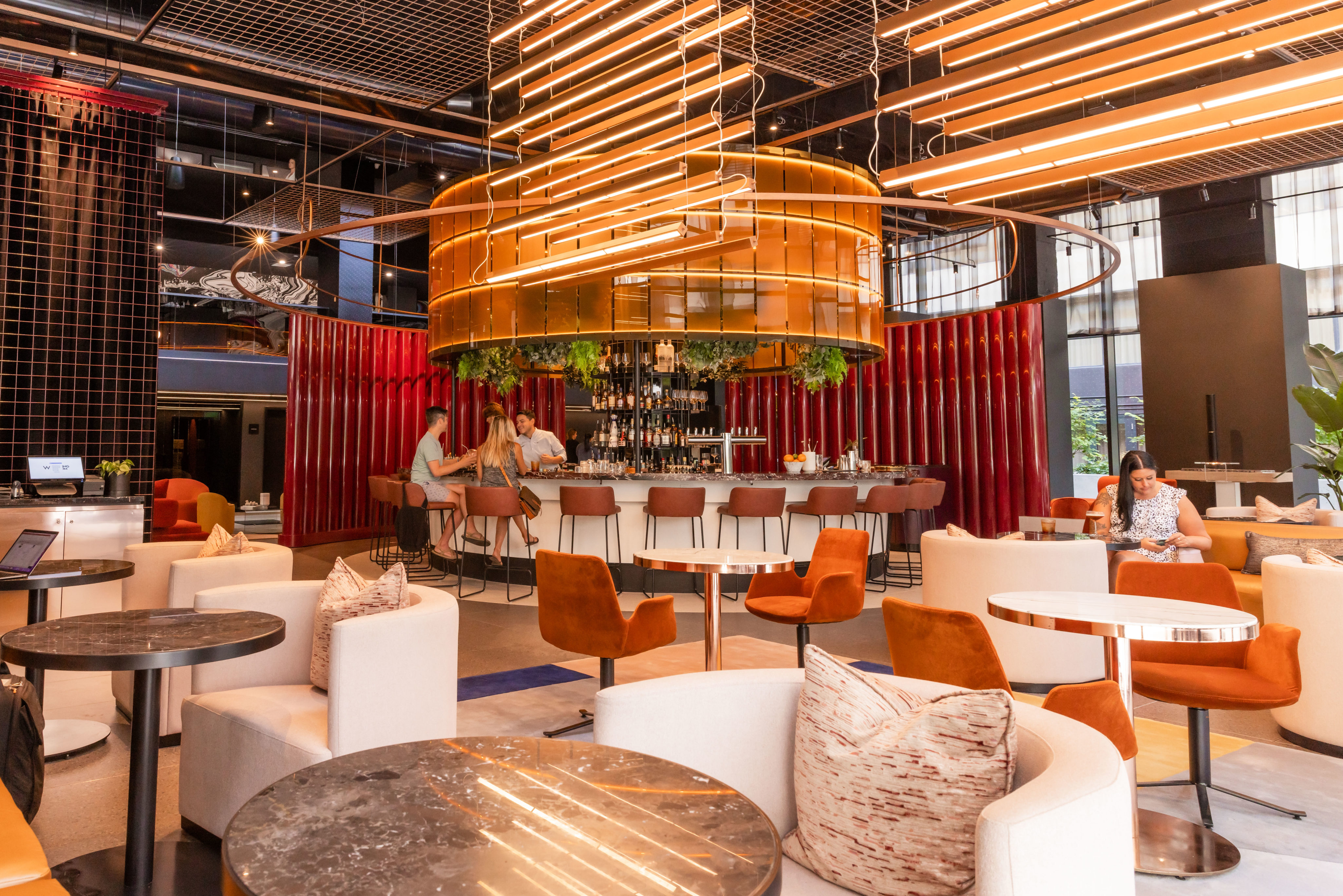 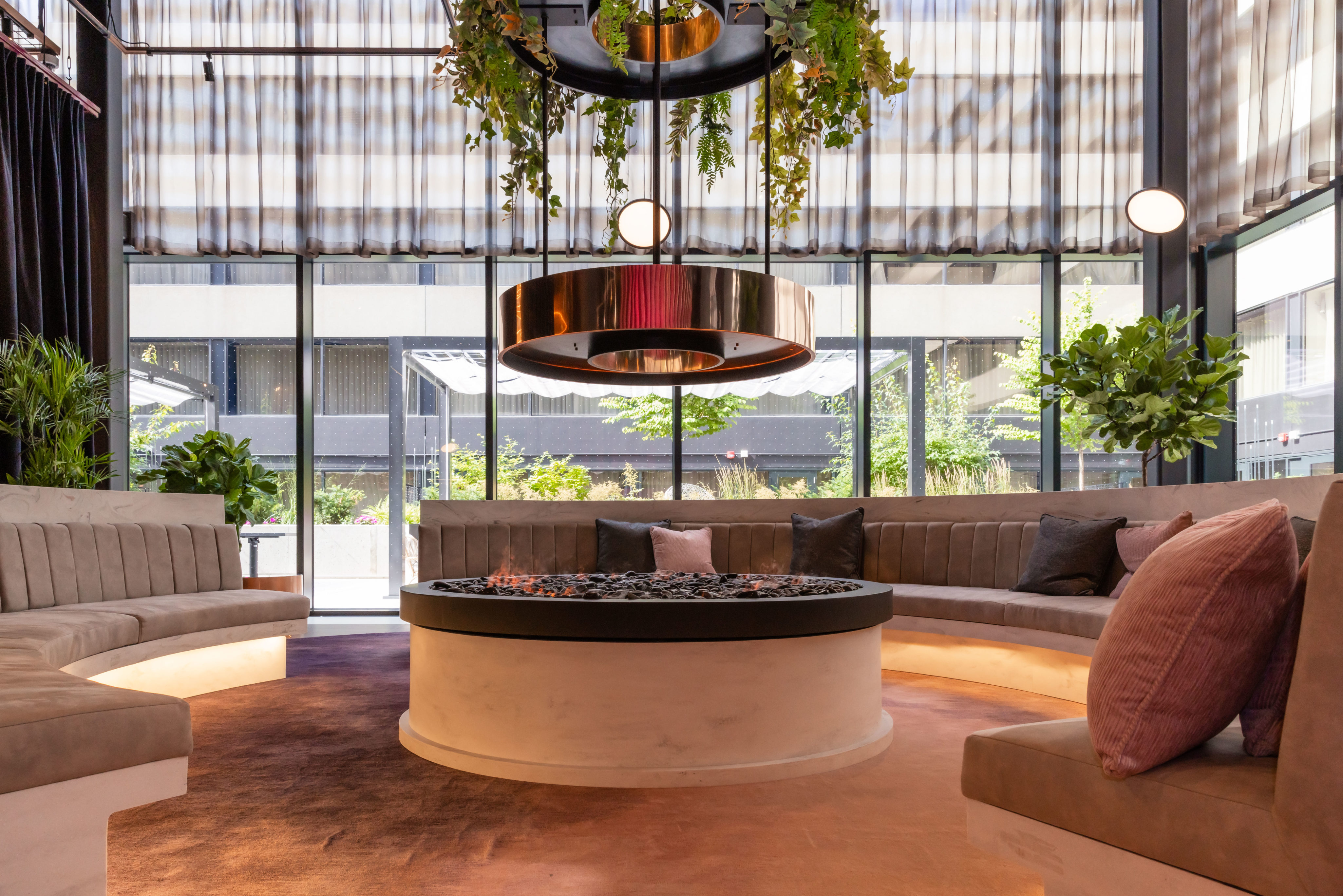 The hallways, on the other hand, embrace the brutalism of 90 Bloor West. If it feels like you’re walking down a tunnel in the Path, that’s the point. 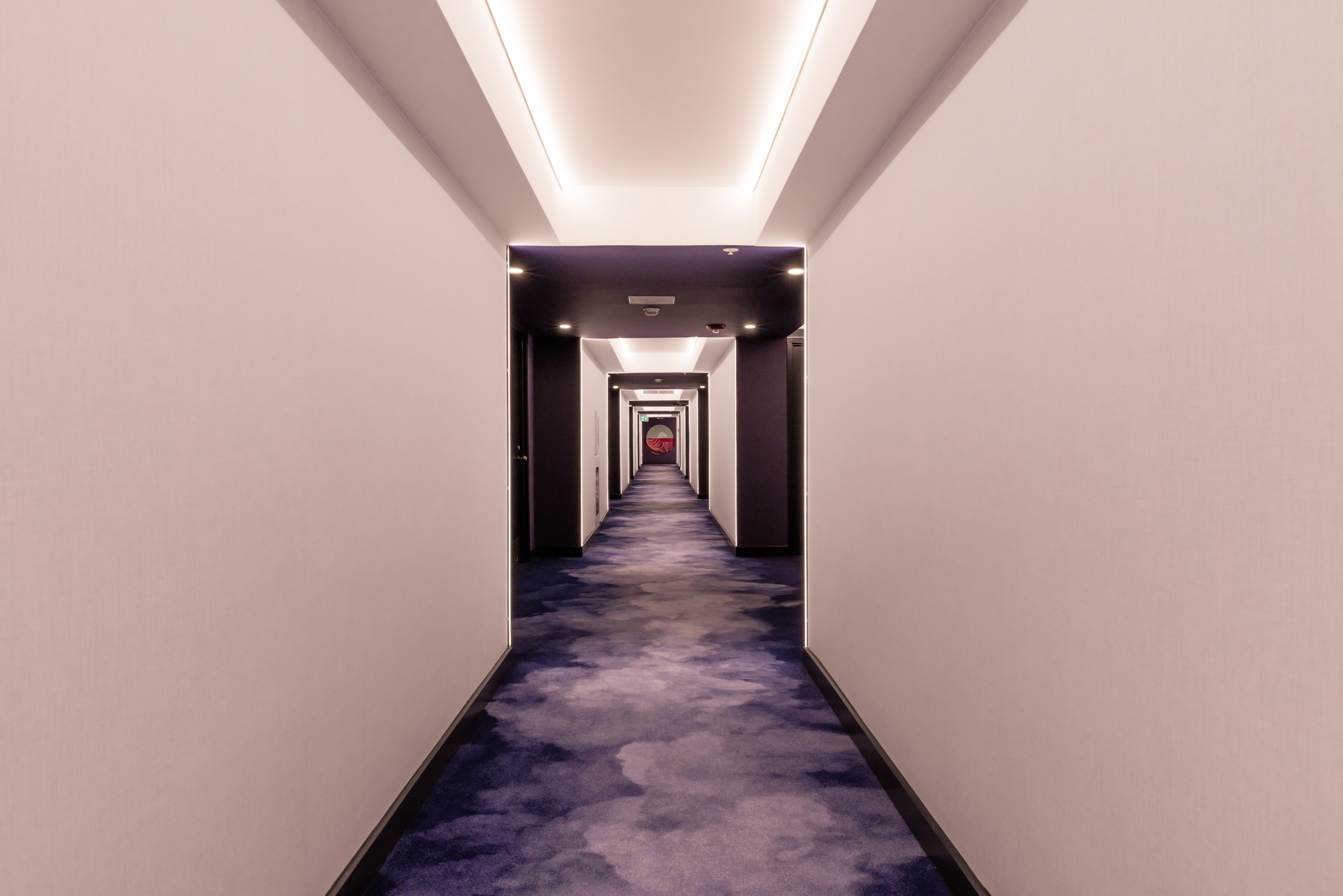 Art curated by Taglialatella Galleries can be found throughout the property. Highlights include pieces by Sage Barns and Alan Ganev, as well as a rooftop mural by Canadian artist Kirsten McCrae, who painstakingly arranged coloured pebbles to create a geometric pattern that can be appreciated from all guest rooms above the ninth floor and any planes that happen to be flying overhead.

The Living Room bar specializes in all things sparkling: champagne, prosecco, pét-nat. But, if you’re looking for bubbles on the go, there’s also a Moët vending machine. (Tokens cost $50.) 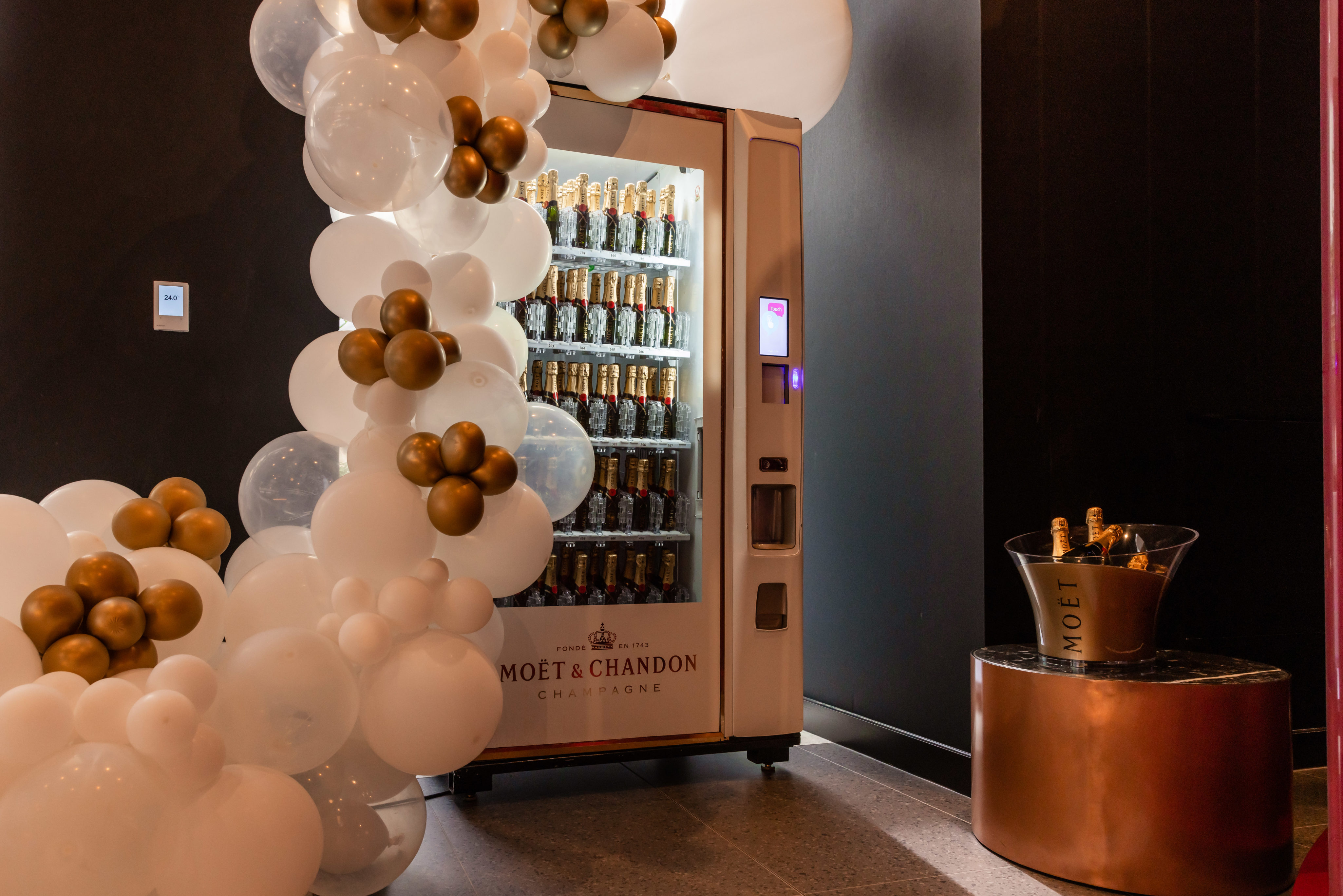 This is the 3,300-square-foot gym. Not only does it have just about any cardio machine a gym rat could want, it also boasts a mini yoga studio and a boxing space. 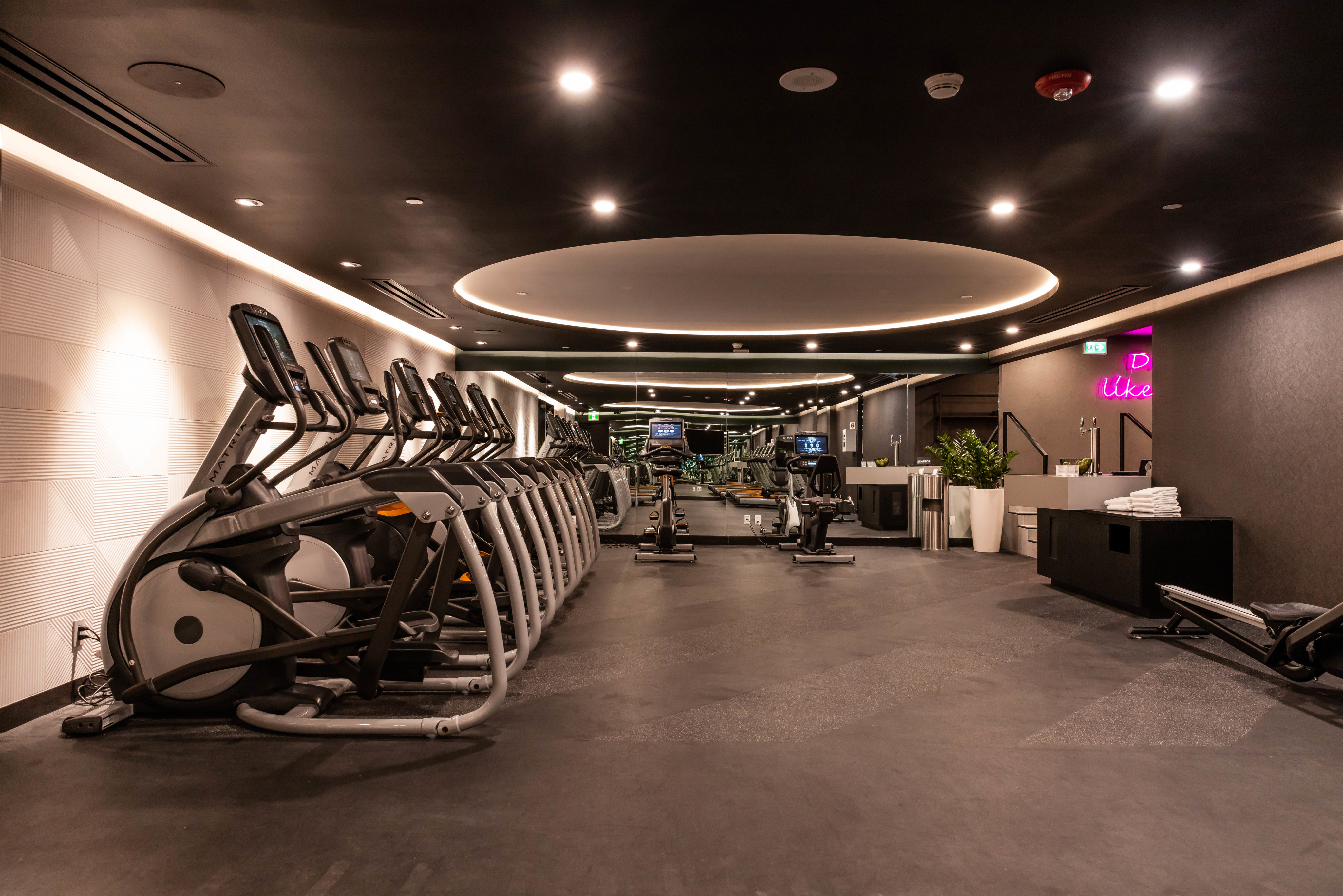 More than two-thirds of the 254 hotel rooms look down onto the interior courtyard, or “The Yard,” which creates a sense of being removed from all the bustle of Bloor. Accommodations range in size from 300 to 1,800 square feet, with 16 suites boasting their own private outdoor terraces. Rooms start at $629 per night; suites at $829 per night. 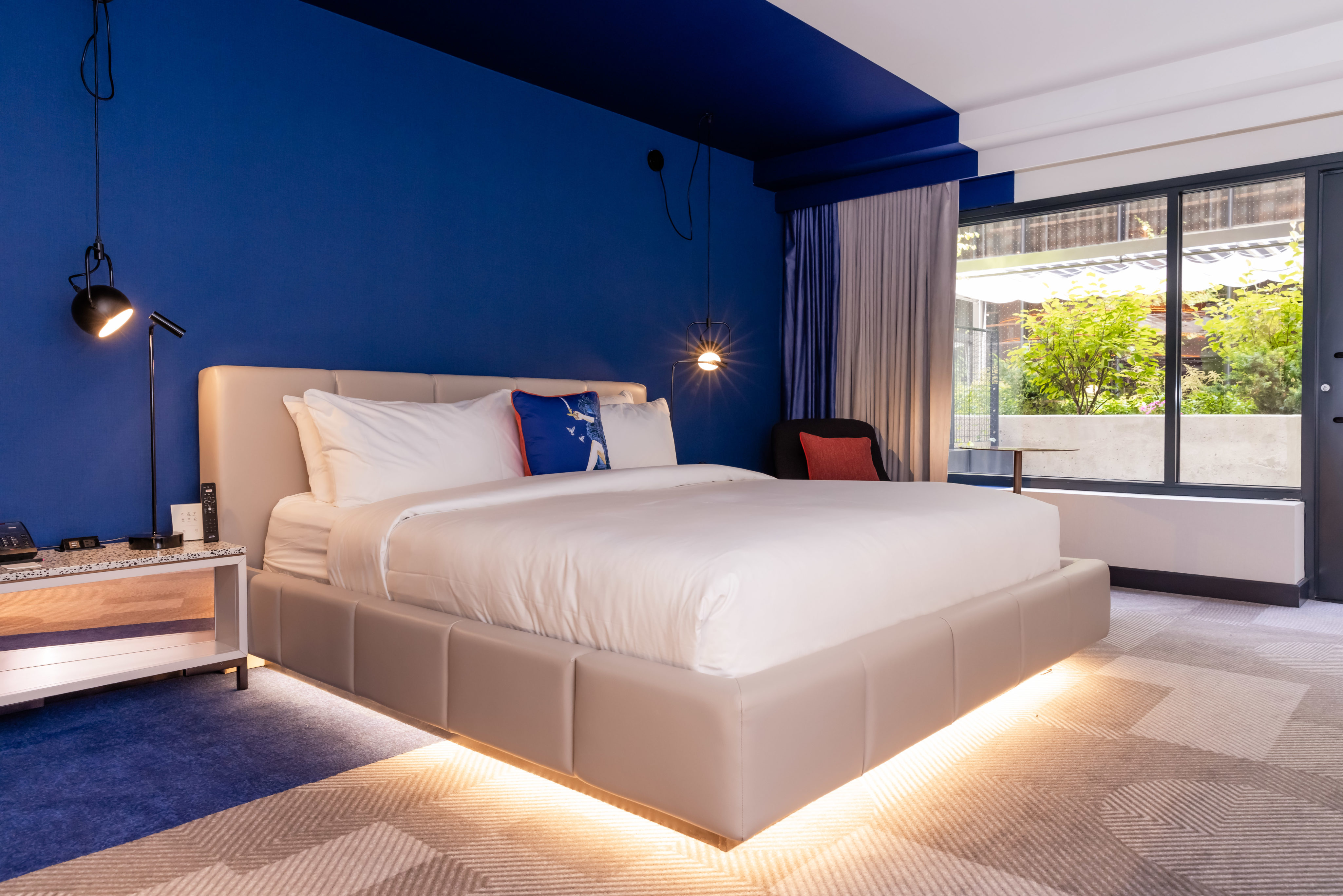 Room amenities include yellow melon-scented toiletries by Momo, elegant waffle robes, Nespresso machines and mini bars to inspire amateur mixologists. Scan a QR code for cocktail recipes that make use of the libations on offer. The absence of work desks is purposeful: these rooms were designed with fun in mind. There are, however, plenty of communal workspaces spread throughout the hotel. 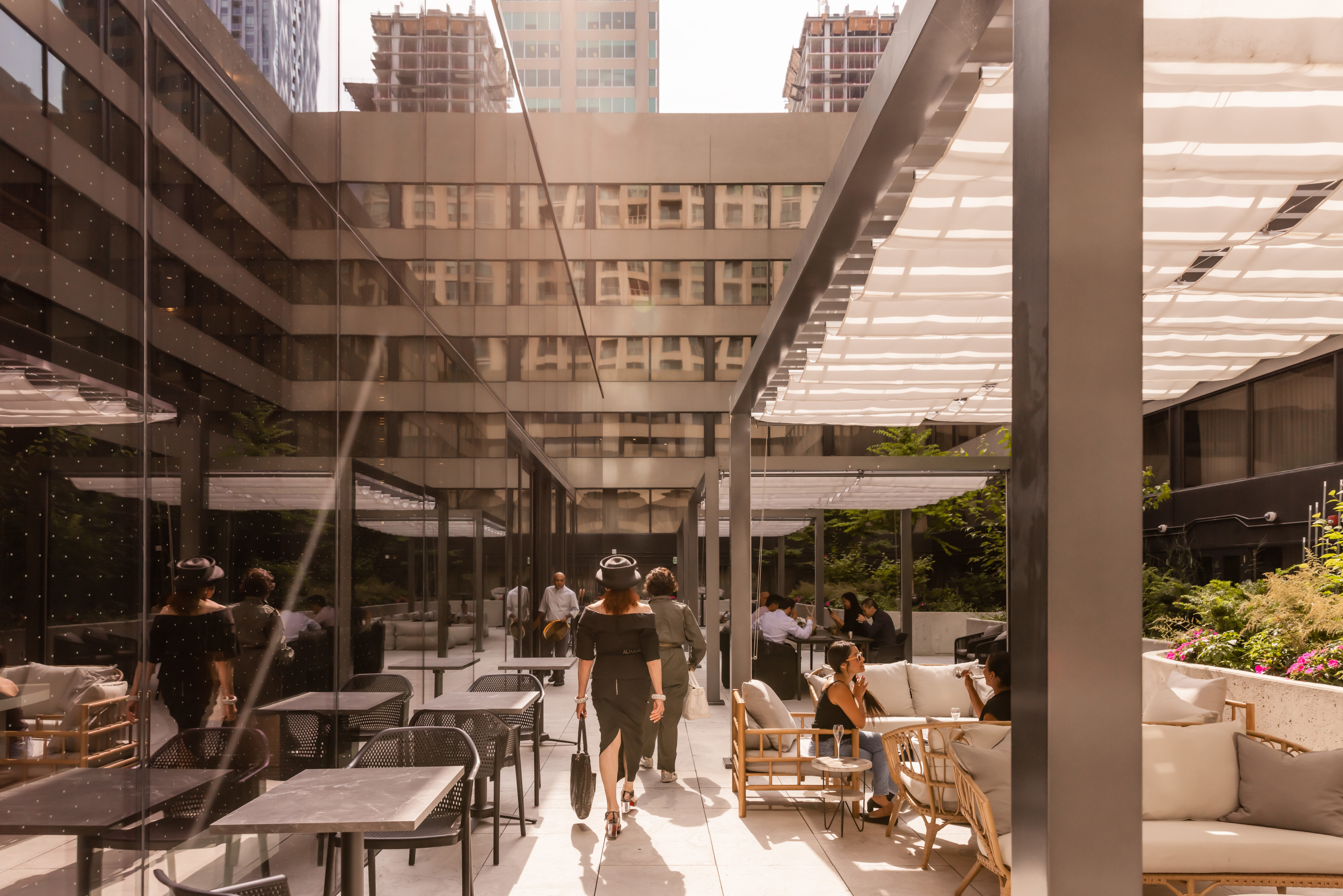 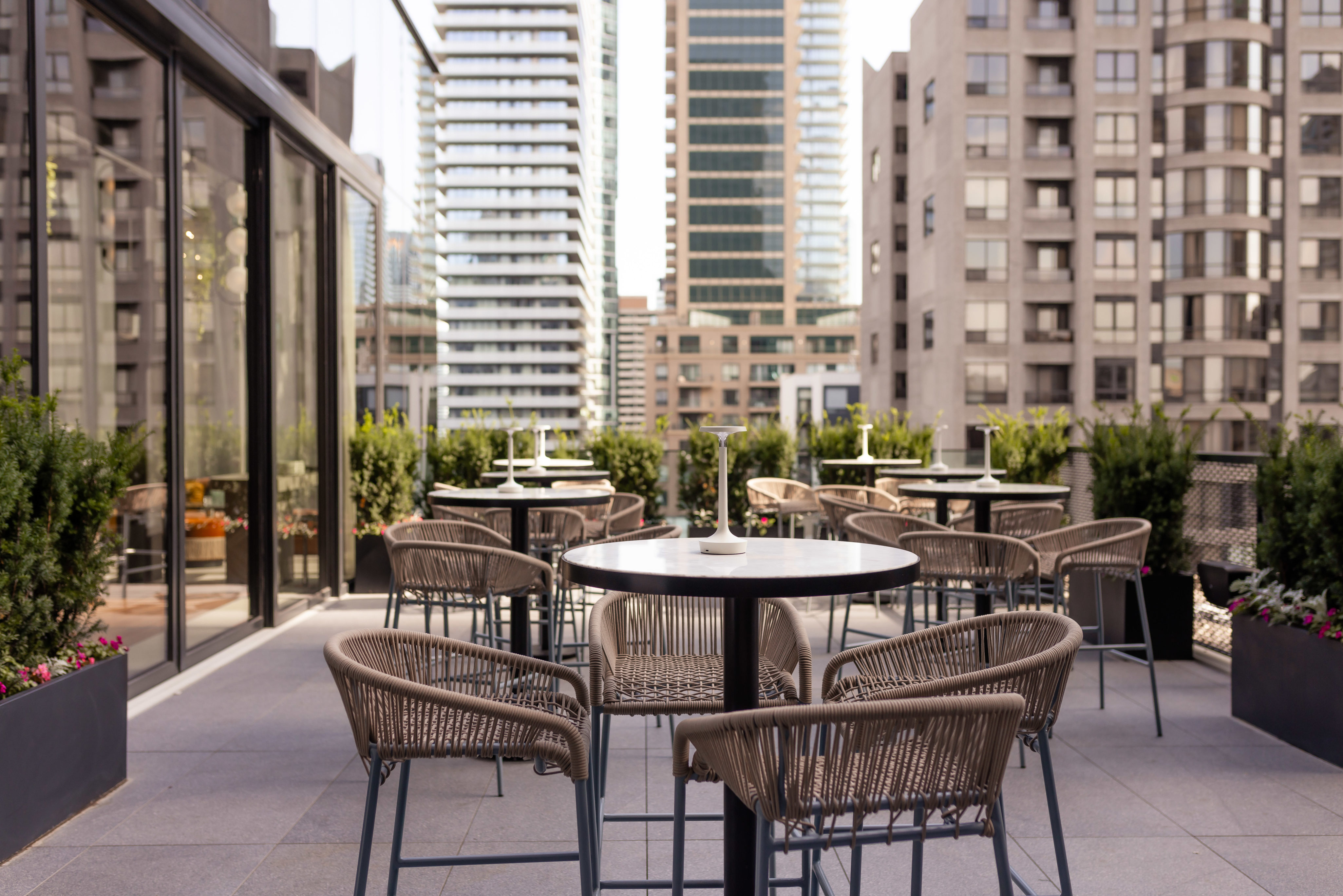 The ninth floor is home to the hotel’s most impressive space: Skylight, a sprawling 134-seat restaurant with a verdant rooftop patio. Although the menu is Mediterranean focused, the decor was inspired by Yorkville’s folksy heyday. The boho ’70s come through in rattan chairs, tufted ottomans and Roche Bobois–reminiscent couches decorated in desert hues and Berber patterns. The birdcage pergolas can be booked for parties of six and larger. 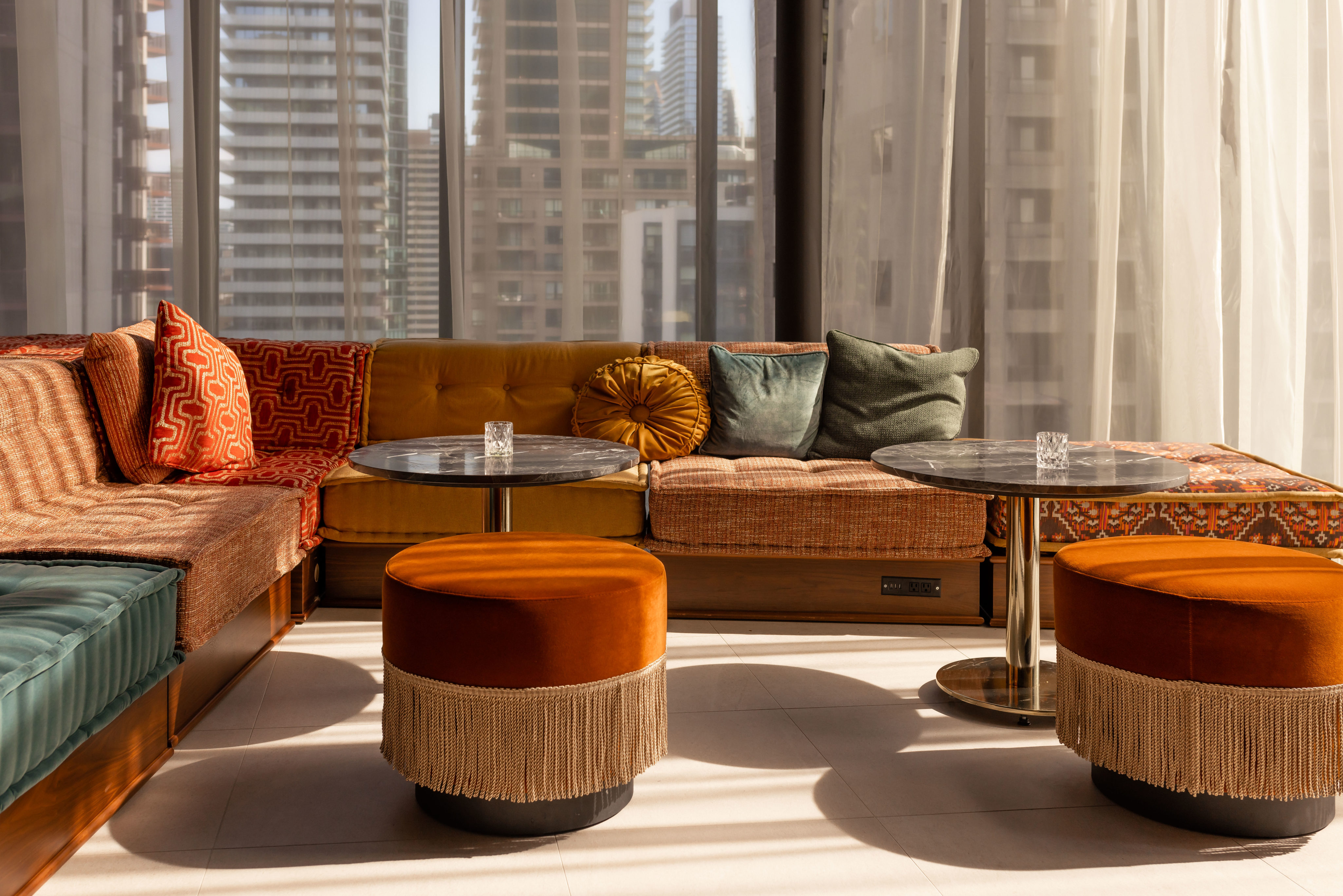 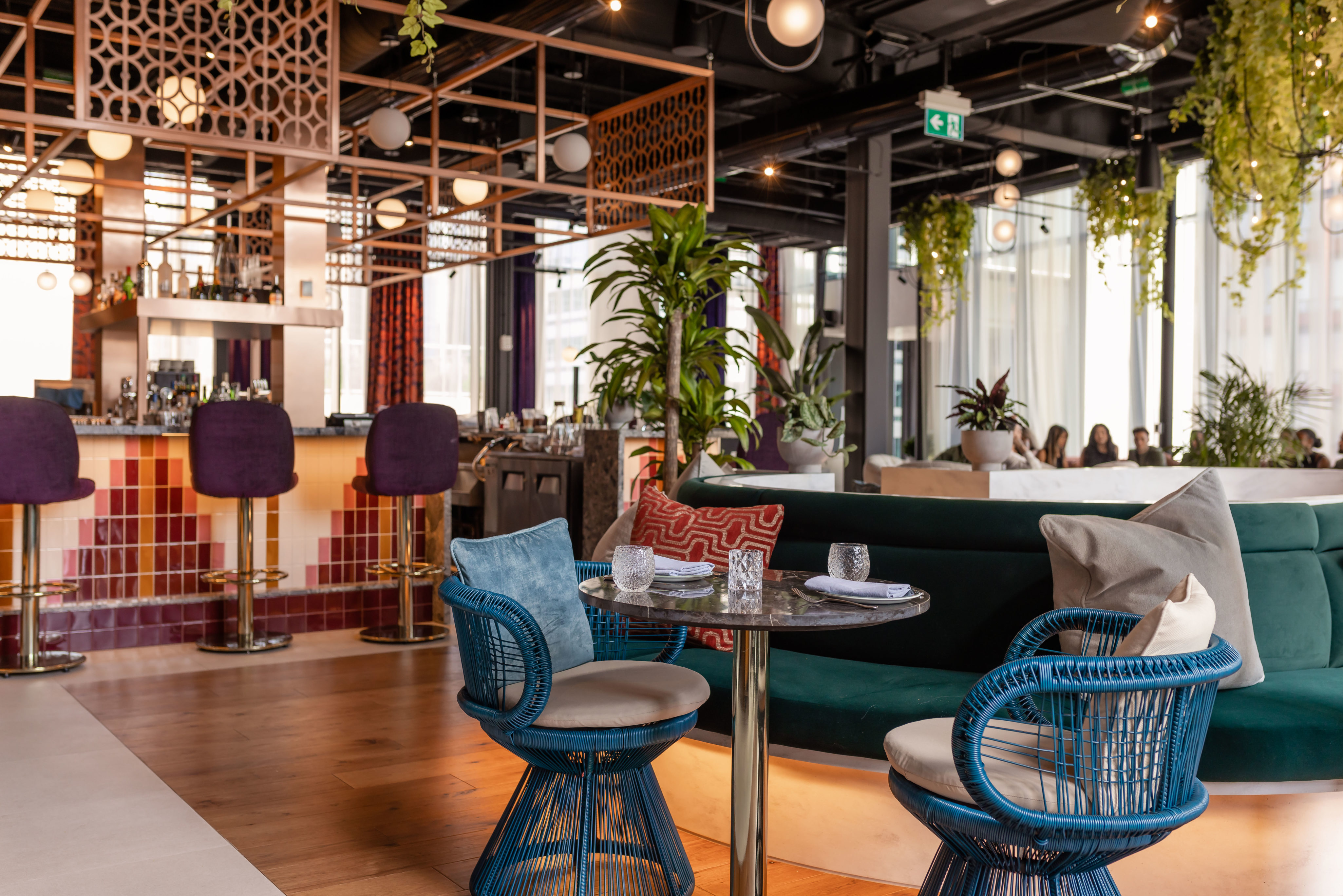 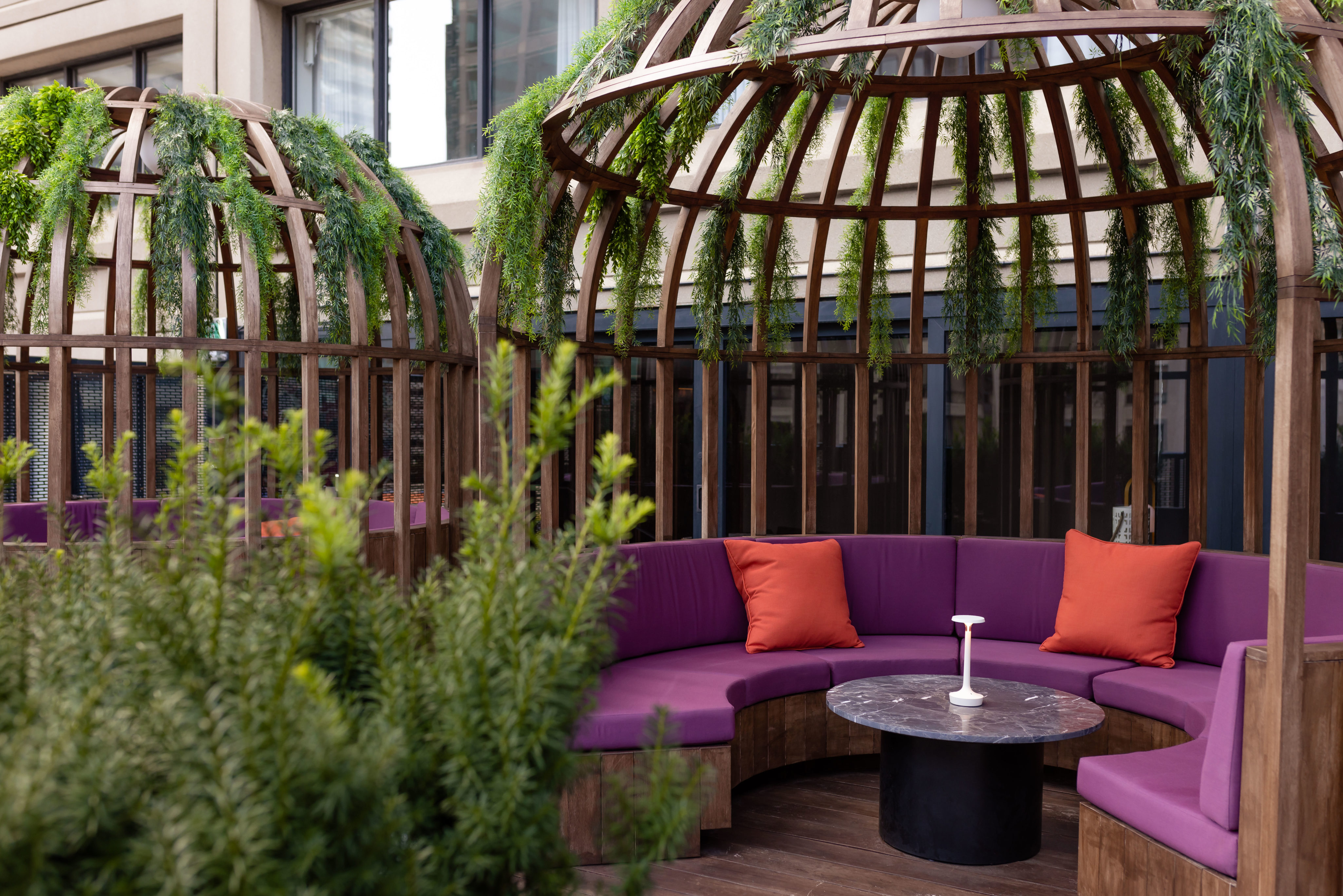