Creative Prince Edward County residents are taking the barns, coops and sties that once housed animals and turning them into clever human dwellings

WHAT The multi-barn Cressy Longhouse
WHERE Waupoos
HOW BIG 2,600 square feet Alan Gratias has a habit of buying old buildings and bringing them back to life. In 1997, he restored the Ottawa home of Francis Sullivan, a former student of Frank Lloyd Wright. Then, he restored two houses in Lunenberg, Nova Scotia, where he lived from 2000 to 2010. And in 1998, he bought three falling-down barns—a pig barn, drive shed and turkey coop—along with a decrepit Loyalist farmhouse on the extreme eastern shore of Prince Edward County that he now calls home. Gratias tackled the farmhouse first. After getting a thigh-high river, several rat carcasses and “ten years’ worth of crap” out of the basement, he moved in and turned his attention to the old barns. He now uses the renovated, antique-furnished turkey coop, drive shed and pigsty as stylish guesthouses. When visitors pull into the courtyard of Gratias’ estate, they still see a collection of old barns. But once inside, it’s a cozy dwelling looking out to chardonnay grapevines and the pounding waves of Lake Ontario. “They walk through the door, and they’re like, ‘Oh, geez! This is not Ontario, this is the south of France,’ ” Gratias says. The 40-by-25-foot pig barn became one long living room, where Gratias installed a limestone floor with built-in heating. The ceiling was finished with reclaimed barnboards: The mirrors are made from window frames taken from Gratias’ restored homes in Nova Scotia: This statue of Neptune, located just beyond the pig barn’s west-facing window, overlooks a field of lavender: The upstairs bedroom in the drive shed has a simple white barnboard interior, with pine blanket boxes and antique furniture bought around the county: Gratias had this Swedish-style fireplace built in the second bedroom in the turkey coop—with just a photo from a Swedish design book as a blueprint. Gratias rubbed tea leaves and coffee grounds into the whitewashed stucco surface to add an antique patina. The large bedroom takes up the entire coop: The kitchen is on the ground floor of the drive shed. One of the supporting beams is original to the old structure; the rest are new: WHAT A renovated chicken coop, plus two other cabins
WHERE Sandbanks Provincial Park
HOW BIG 450 square feet You’d never guess that the previous residents of Andrew and Rebecca Mackenzie’s Prince Edward County retreat were chickens. Their converted 19th-century chicken coop, the centrepiece of a trio of wooden buildings that form their second home, in Sandbanks Provincial Park, was once a henhouse owned by Lakeshore Lodge, a vacation resort established in the 19th century and shuttered in 1972. When Andrew, a creative director for Google Canada, purchased the building in 2003, it had already been converted into a cabin—but it was just barely livable. “The outhouse had such a scary toilet that it was a toss-up between going in there and driving 20 minutes to Picton,” he says. Andrew wasn’t dating Rebecca, the executive director of the Culinary Tourism Alliance, back then. They got together in 2009, and the following summer, they made it their first shared home. Shortly after (literally) shacking up, the couple learned that Rebecca’s father had worked for Lakeshore Lodge as a teenager. “We love that it’s a place that weaves our histories together,” says Rebecca.

Local carpenter Dan Manlow built a barnboard wall as a statement headboard in the master bedroom: Andrew had originally intended to purchase just this 1950s Formica table; he ended up buying the cabin it was in, which now sits opposite the chicken coop: A cozy seating area is opposite the kitchen: Andrew painted the building exteriors black in order to make sure they didn’t hog the spotlight from the landscape: The teak sideboard in the master bedroom is from MacCool’s Reuse: The interior of the Airstream trailer is decked out in barnboard. It functions as an additional bedroom when the Mackenzies host big parties: Andrew found this plaster head hanging from the trees near the chicken coop: When Nina-Marie Lister and Paul Stevens say their place is a pigsty, they don’t mean it metaphorically. The pool house and rec room where their four sons spend most of their weekends and summers was formerly home to a dozen hogs. They bought their 49-hectare property in 2004, so they could farm part-time. The farmhouse became their main living space, and Stevens—who designed York University’s hyper-modern Bergeron Centre for Engineering Excellence—drew up a blueprint for the pigsty conversion four years later, when the family’s in-ground pool was being built. Today, one side of the pigsty turned pool house is a changing area; the other is a social space. “The building is very humble,” Stevens says, “which reflects its original use.”

Stevens painted the exterior of the sty red to match the property’s main house and trailer shed. A silver roof reflects the sun and changing sky: The walls inside the pool house are cedar. “Even now it has a beautiful scent to it,” Stevens says. The floor is poured concrete, to keep dust down. “These farm buildings are utilitarian, not the kind of places you’d put carpet or tile,” Stevens says: Stonemason Aubrey Blaker built the walls behind the saltwater pool. He used the limestone foundation stones from an original barn on the property: 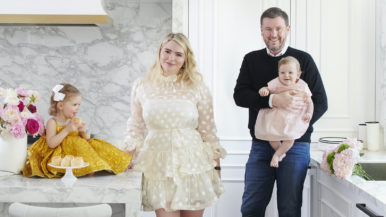 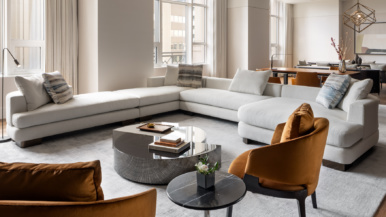