Caroline Kassabian and Alexander Irving had been living comfortably in their Roncesvalles home for more than a decade and hadn’t given much thought to a renovation. Their 1920s semi was small, but it suited them and their son, Malcolm, now 10. They especially loved the neighbourhood, with its laneway parties, fruit stands and small-town feel (both had lived in the area even before moving in together). Every once in a while they’d pine for a little more space, a little more light and a better walkout to the backyard (which could only be accessed by way of a small mudroom off the side of the kitchen)—nothing extravagant, and nothing that needed to happen immediately. That was until five years ago, when a kitchen cabinet door came off its hinges in Kassabian’s hand. It was the 10th time the door had come unhinged, and Kassabian swore it would be the last. The case of the busted cabinet became an excuse to redo the whole house and tack on a two-storey addition. Kassabian, who is a high school guidance counsellor, and Irving, an artist and University of Toronto professor, worked with Studio Junction to sketch out the old house’s new bones, while Kassabian took over much of the interior design work herself. The family moved out for the five months it took to complete the reno. While they added lots of new floor space, their favourite features are the windows—especially the wall-to-wall back window that slides open in summer, allowing the backyard to function as an extension of the house—and the new cabinetry, all of which was made by the local millworker David O’Sullivan. They don’t expect it to come unhinged anytime soon.

The couches in the living room are from Klaus. They’re part of a sectional that Kassabian and Irving reconfigure often. The painting, by Irving, is called “Rope,” after the Hitchcock movie of the same name (it’s one of his favourite films): The windows to the backyard face four beech trees. Kassabian and Irving love the privacy and shade the trees provide: The photograph, which is part of a series by Christian Chaize, is of a beach in Portugal: The quilt on Malcolm’s bed was a gift from textile artist and family friend Denyse Schmidt: The artist Anda Kubis, a friend of Kassabian’s, painted this piece when Malcolm was born: Another oversized window in the front sitting room provides plenty of natural light: Kassabian designed the walnut storage cabinet in the entrance. It was made by David O’Sullivan: 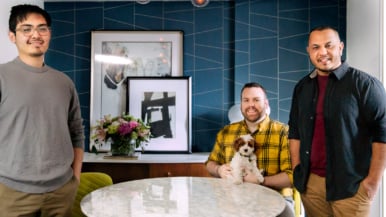 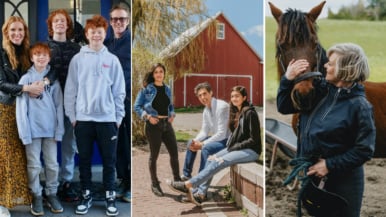 Our most popular home tours of 2021 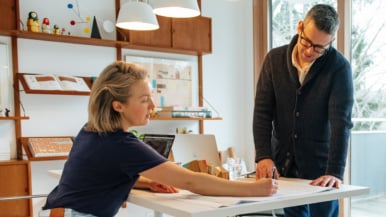 Our favourite home office spaces of 2021 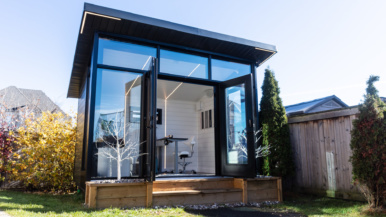