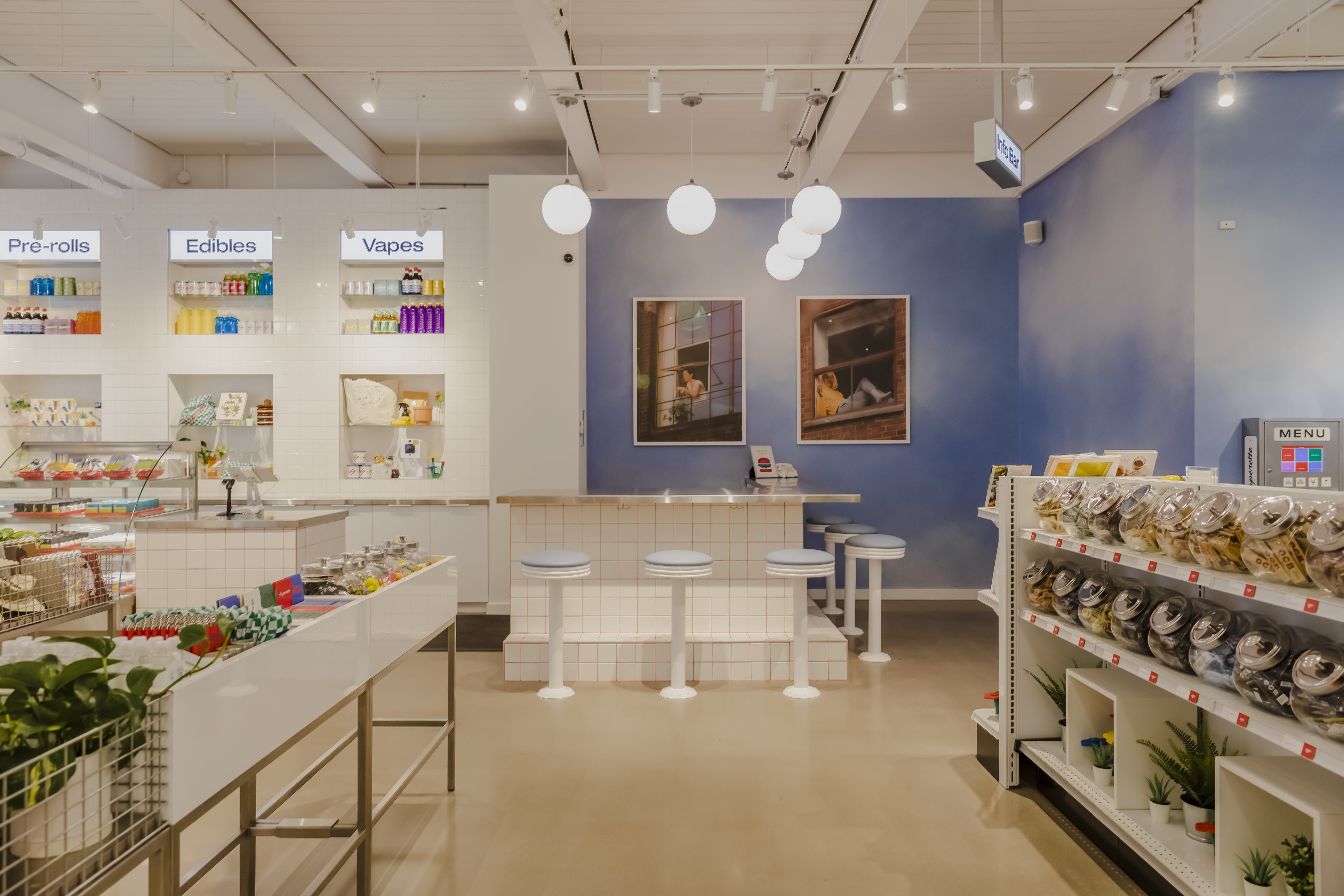 Pot isn’t the first thing people associate with Rosedale’s ritzy streets, but that’s exactly where Superette CEO Mimi Lam has set up her new flagship store, a retailer that’s as much about good style as it is about cannabis innovation.

Lam co-founded the brand alongside her former Tokyo Smoke colleague Drummond Munro in 2018. They invested everything they had in building it from the ground up. “We don’t have families and we don’t have mortgages,” she says. Lam is unfazed by the damper Covid-19 has put on in-store shopping. “We built our retail experience with the assumption that we’re not going to be in a Covid scenario forever,” she says. In a pre-pandemic world, the flagship was to be a destination—somewhere out-of-towners would gladly venture out to. In the aftermath, Lam hopes it will be too. Meanwhile, the team has pivoted its many innovations to be safe for the time being: its interactive scented cannabis flower wall is look-but-don’t-touch, and its refurbished cigarette dispensers operate as contactless menus.

Lam worked as Tokyo Smoke’s director of corporate development before conceptualizing Superette as the brightly hued antithesis of sterile cannabis retail. “There were many brands trying to be the Apple of cannabis or paying homage to the legacy of cannabis, but in a way that wasn’t necessarily thought through,” she says. “We figured that we could bring to market something that was a little more experiential and that focuses on that human connection in-store. We really wanted to be a cornerstone of a community.” The brand first opened an Ottawa shop last spring, and this is the first of three planned Toronto locations (49 Spadina Avenue opens later this year, while 994 Dundas Street West is set for early 2021). The store resembles a souped-up version of your friendly neighbourhood flower shop (its logo is a nod to flowers for sale outside said shops, while Superette is French for “mini supermarket”). Meanwhile, it offers a direct line to its neighbour, the Rosedale Diner, for placing munchie-approved food orders.

Lam is one of just a handful of visible power players in the industry, and more than 70 per cent of Superette’s employees are women. “If this is what it takes to give someone else more confidence to do their own thing, I’m here for it.”

Here’s a look inside the new space. 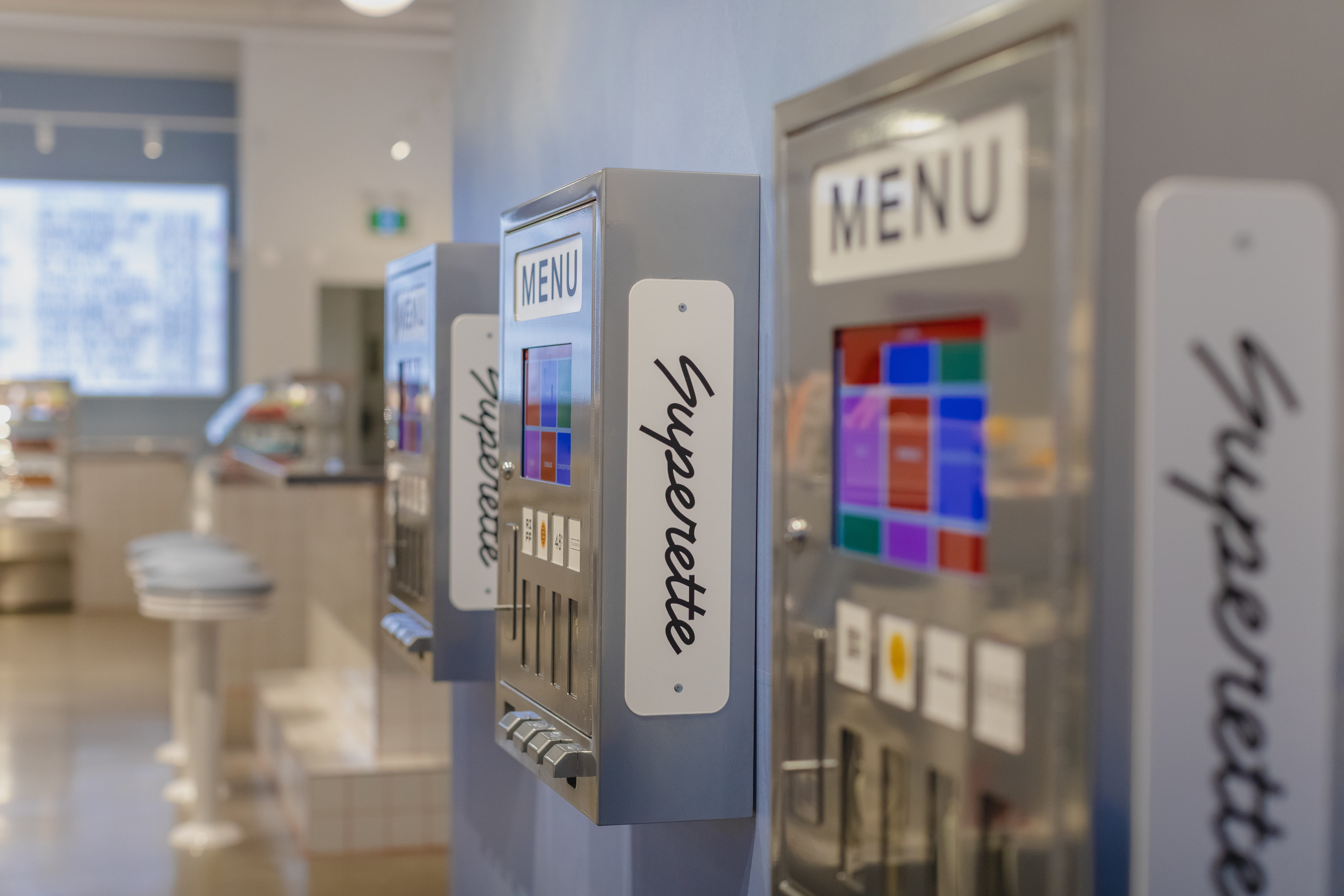 As a clever spin on the ubiquitous iPad-upon-entry menus in most cannabis shops, Lam outfitted refurbished cigarette dispensers with an interactive rundown of what’s carried in-store. Just select what you want and head over to the counter, where the budtenders will fulfill your order. 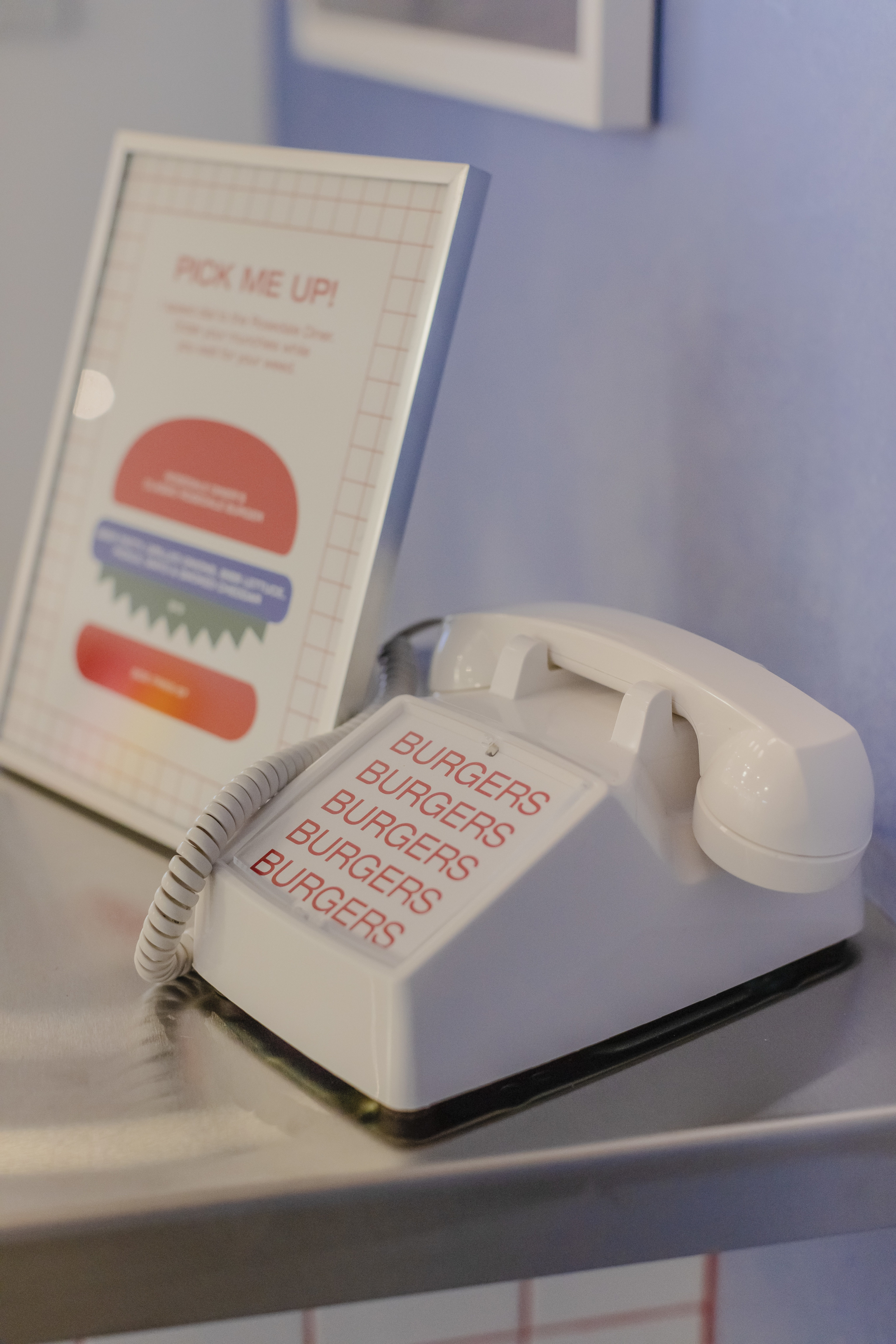 The store’s “Burger Phone” offers a direct line to its neighbour, the Rosedale Diner, for ordering lunch or dinner (or you know… snacks). 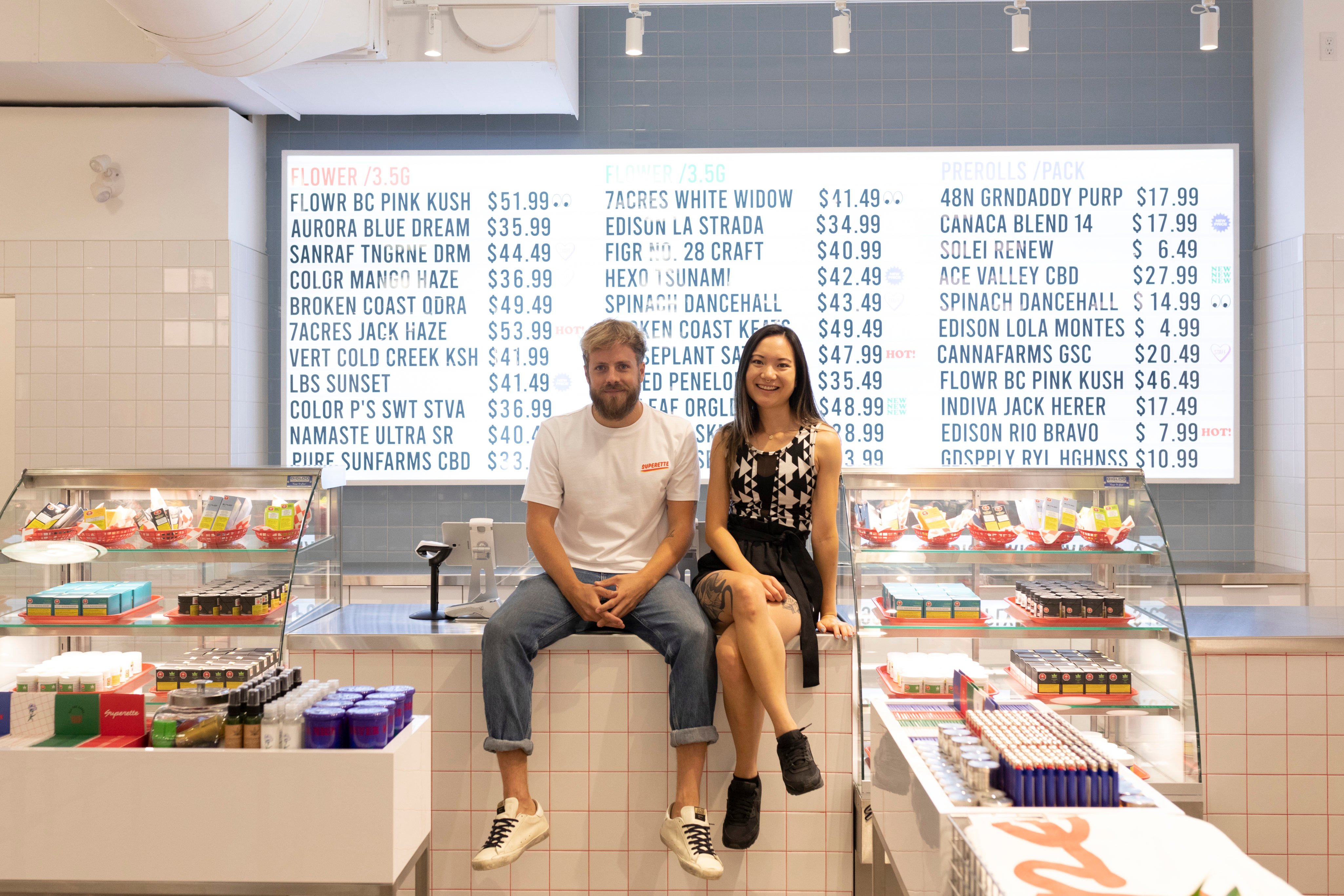 Co-workers turned co-founders Drummond Munro and Mimi Lam met while they were both employed by Tokyo Smoke. 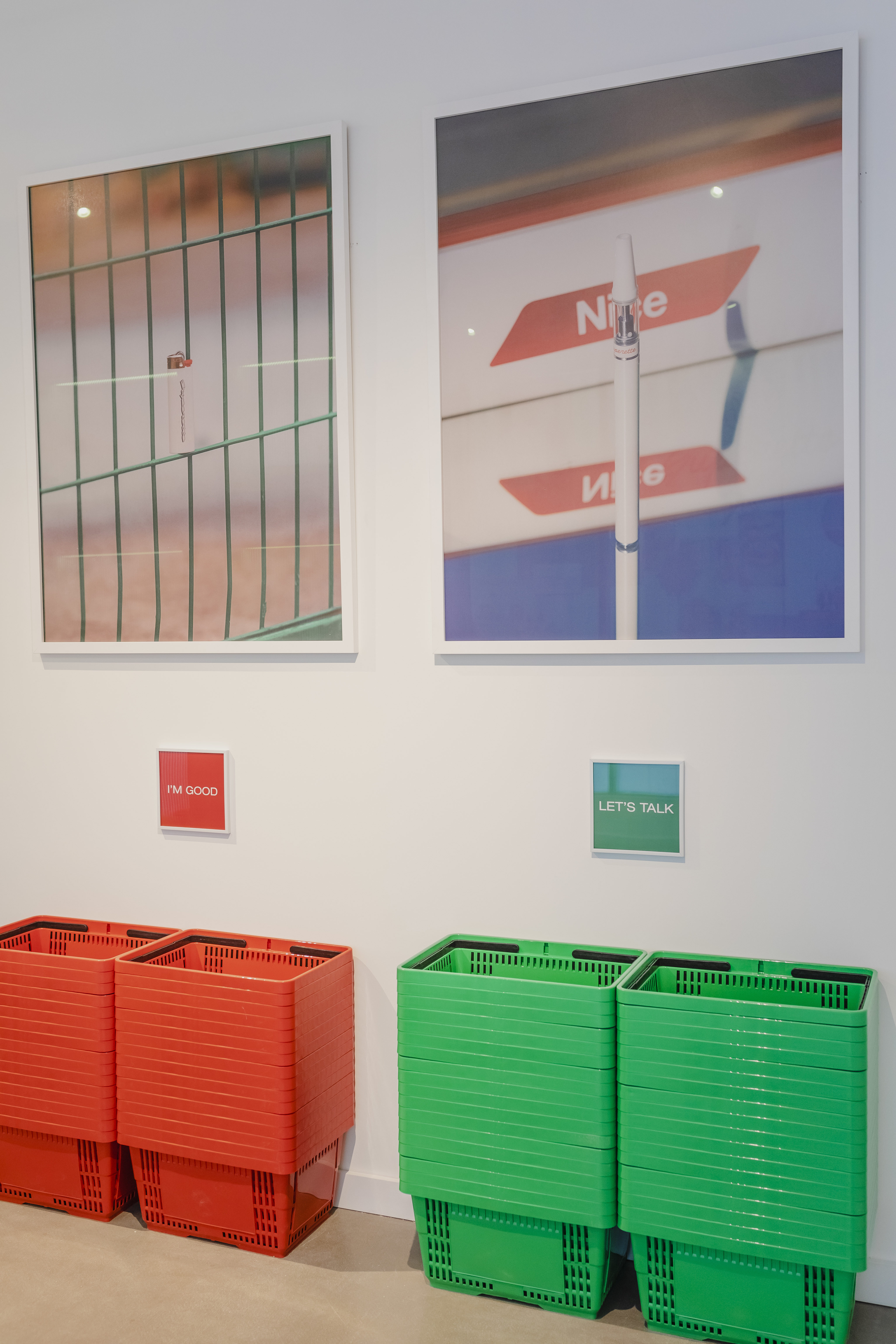 While perusing the store, customers can pick up green baskets if they want salespeople to chat them up and red if they want to shop unbothered. 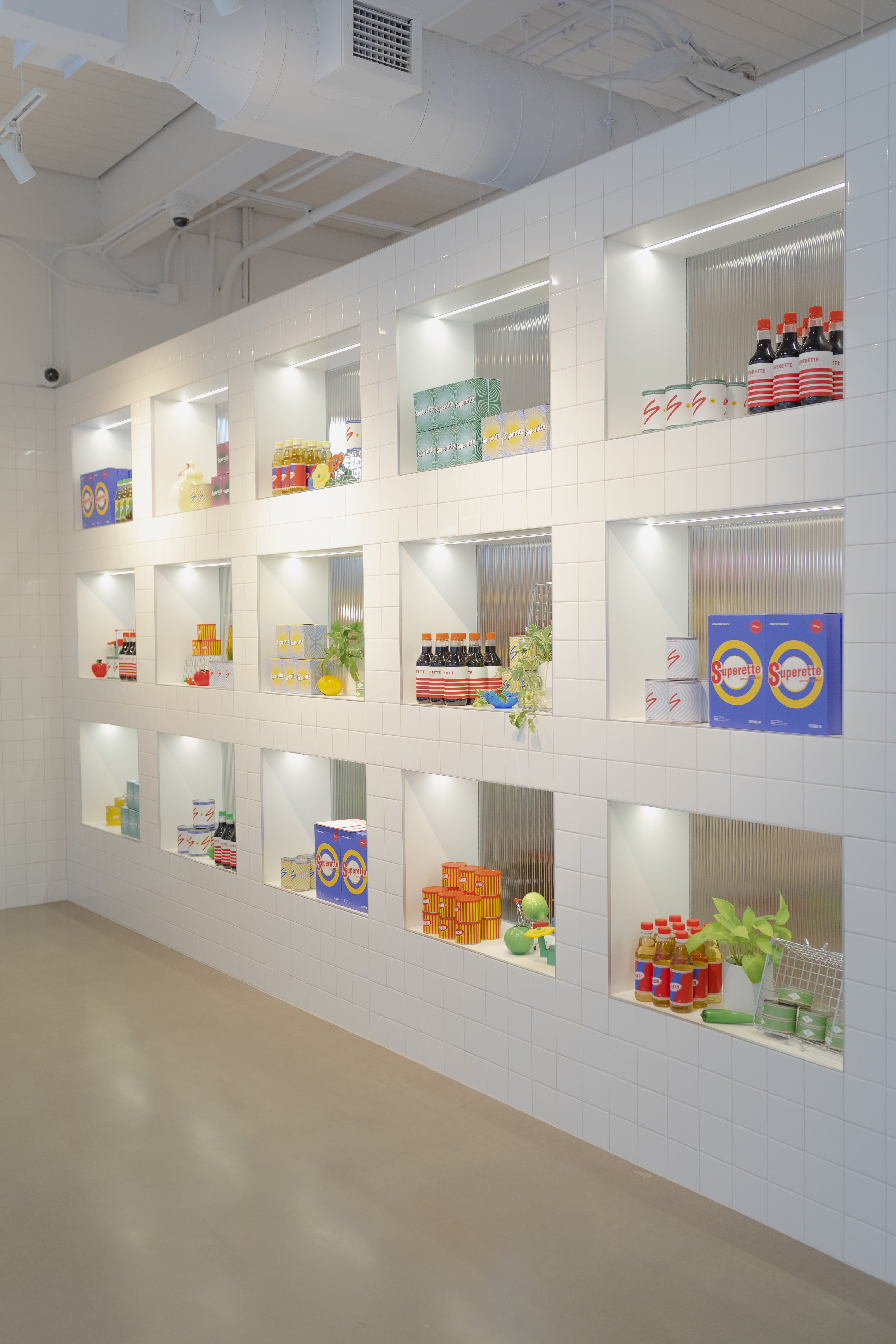 Current cannabis regulations don’t allow for window displays, which is why most stores are blacked out. This wall of faux corner-store staples cheats the system, all while looking incredibly cute and allowing for maximum natural light. 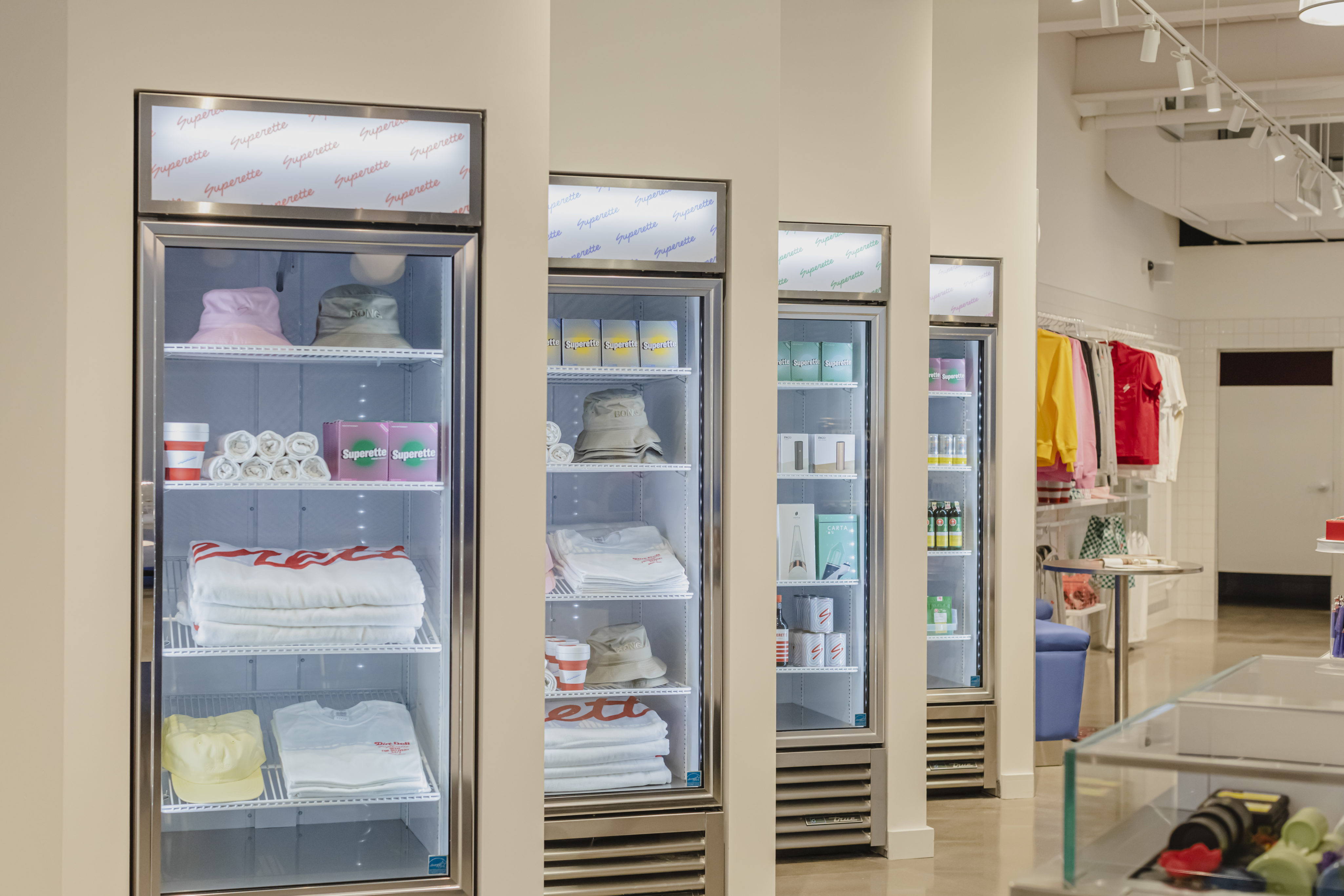 “We always joke that you can get your T-shirt chilled at Superette,” says Lam of the working fridges that house the brand’s merch. 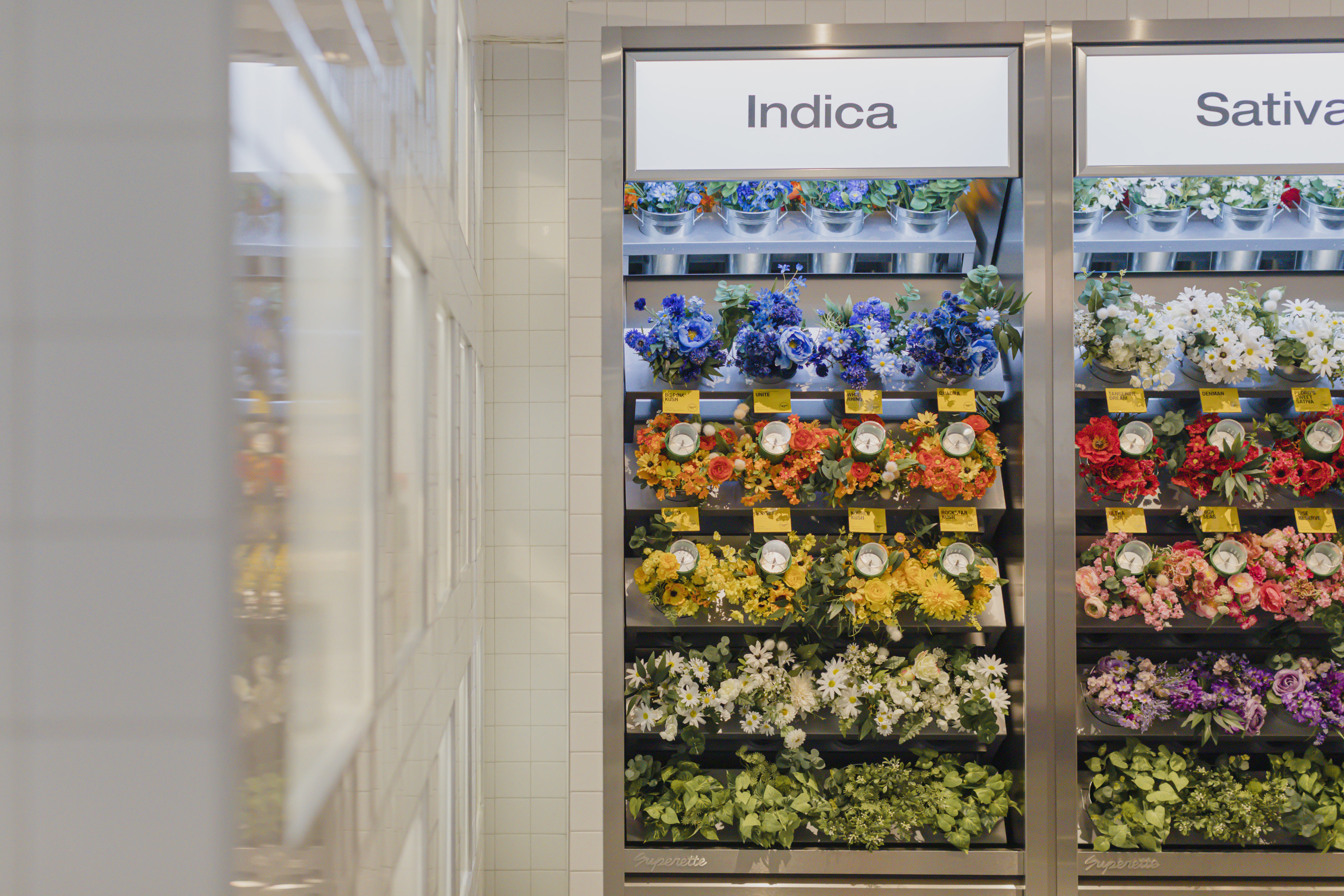 Lam worked with an industrial designer to enhance customer interaction with the cannabis on offer. The result is a flower wall where you can see, smell and—post-Covid—touch the buds. 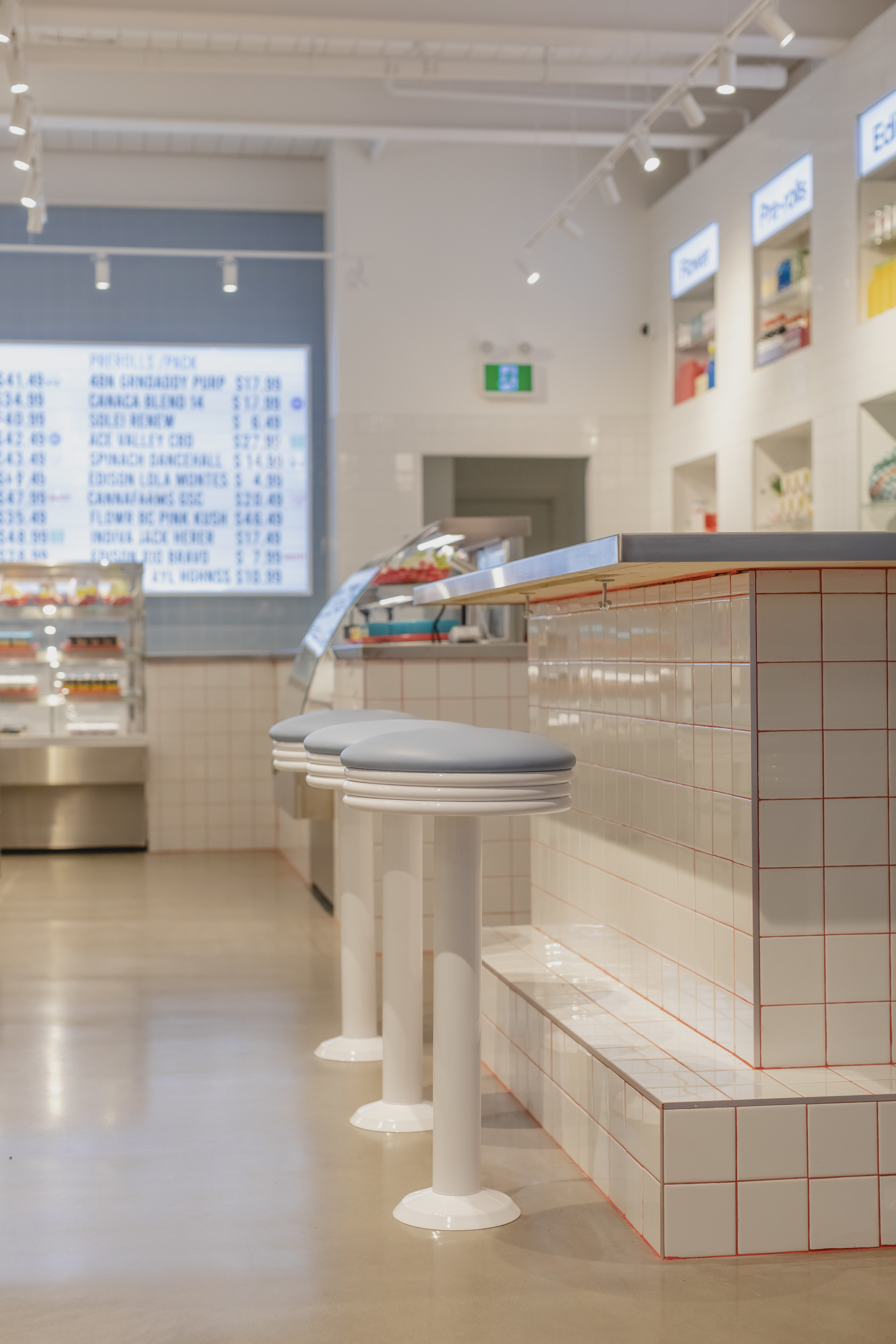 Perching is encouraged on Superette’s signature stools. “It’s not too dissimilar from pulling up at a bar and asking what’s on tap,” says Lam. 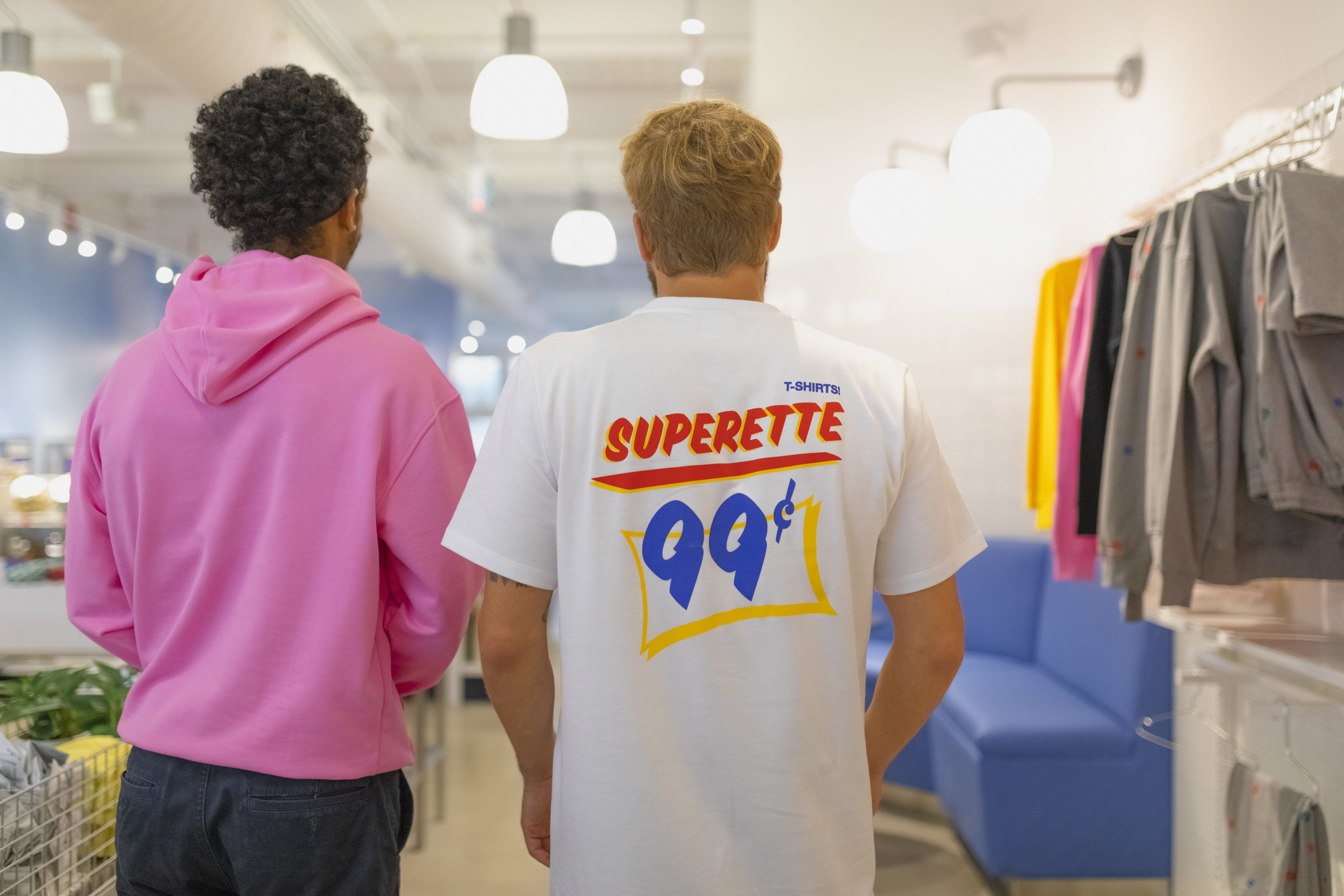 Superette’s merch is made in Portugal from organic cotton. “We really just went for it,” says Lam.