This Wasaga Beach cottage—which got renovated on HGTV—just sold for $1.1 million

This Wasaga Beach cottage—which got renovated on HGTV—just sold for $1.1 million

A 970-square-foot waterfront cottage on Georgian Bay. The three-bed, one-bath getaway has more than 50 feet of east-facing, sun-catching beachfront, plus a bunkie with extra beds. It’s also just a short drive from the slopes of Collingwood and the shores of Wasaga Beach.

Ryan Smith, 41, an animator, and Sarah Smith, 34, a behavioural therapist 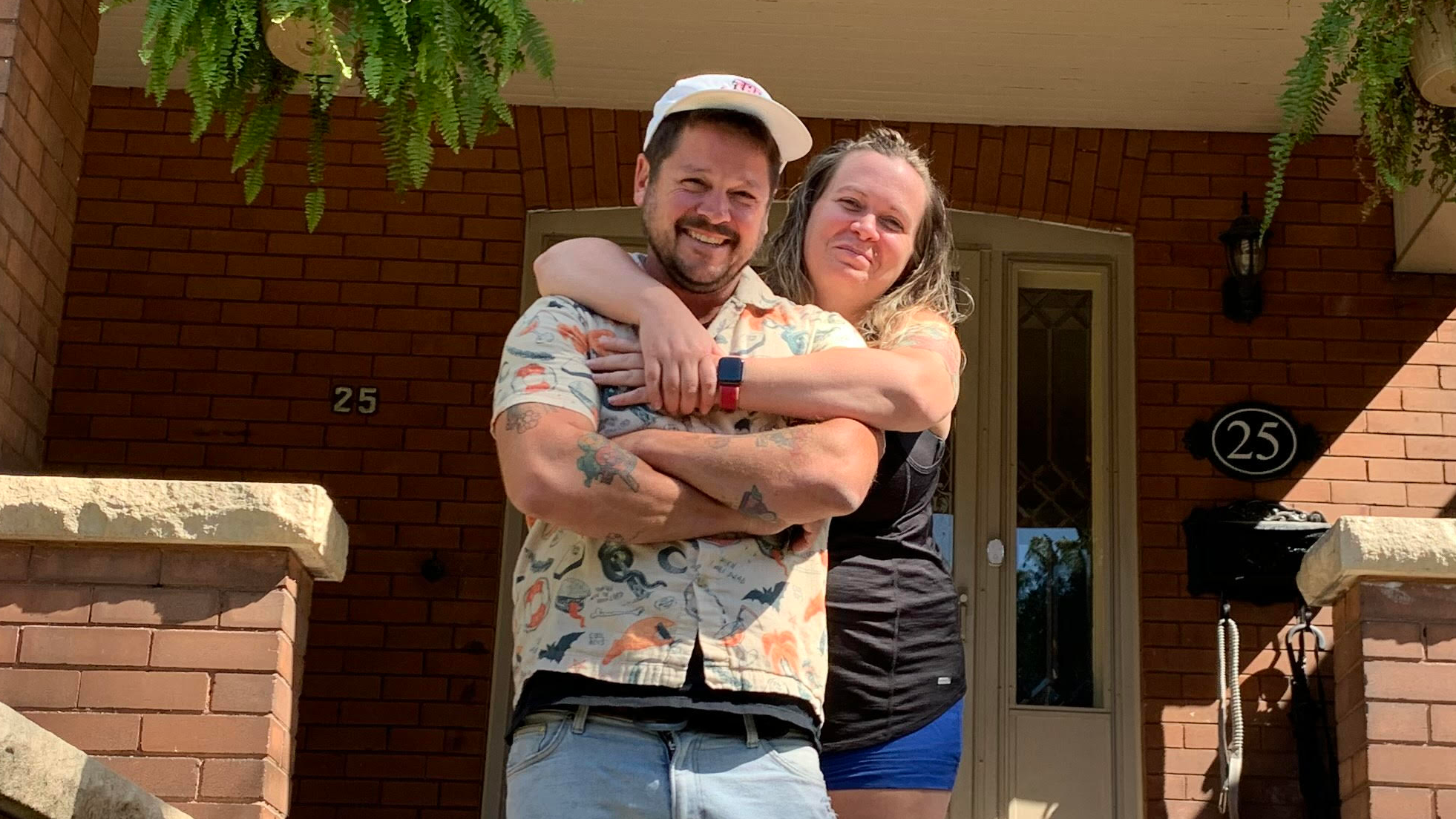 In 2017, Ryan and Sarah moved from Toronto to Hamilton with their two kids. Later that year, Ryan’s parents and another family member bought the original property—a rundown cottage with peeling wallpaper and stale carpeting—for $650,000. They planned to use it as a summer getaway and winter income property, but were unable to attract any vacationers. Then, in late 2019, producers from HGTV were looking for dilapidated lakefront income properties to renovate for a show called Scott’s Vacation House Rules, featuring reno expert Scott McGillivray. This one fit the bill. It was livable but in need of serious upgrades. Ryan likened it to Minebuster, the rickety wooden roller coaster at Canada’s Wonderland. The interiors were dark and old-fashioned. On the main level, it had a tiny kitchen, dated flooring and two flimsy balconies. On the lower level, it had little natural light, cheap barnboard wood and patchy walls. In September, HGTV agreed to update the cottage later in the fall of 2019, with the episode airing in the summer of 2020. That gave Ryan and Sarah an idea. Knowing the reno would add value to the property, they could get the place appraised, buy out their family member, and co-own the freshly upgraded cottage with their parents. And that’s exactly what they did. After getting it appraised at around $800,000, Ryan and Sarah were co-owners.

Ryan’s cousin and realtor, Cassandra Allen, and her partner Kelsey Sutcliffe, actually appeared as the property managers in the episode, which aired during Pride weekend this past June. On the exterior, the HGTV team added new windows, painted and re-sided the cottage in cream and white, and replaced the waterfront deck. Inside, they removed built-in closets to make more space, stripped walls to the studs and installed white shiplap panelling to brighten the interiors, and expanded the kitchen. All of that cost the family approximately $100,000.

After the speedy TV reno, which drastically improved the property’s income potential, the family rented it out for $2,700 a month from the winter of 2019 to the spring of 2020. When Covid hit, it was still occupied. Ryan and Sarah felt penned in by the lockdown and wanted to move to the country, where their kids would have more space to run around. In June, they moved to the Wasaga property full-time for the summer. Then, in August, they read an article about the red-hot cottage market and thought it might be a good time to sell Wasaga and look for a new place in the country. Since both Ryan and Sarah were flexible working remotely and thought the kids were young enough to adjust to a new school, on Aug. 11, they listed the place for $1,099,900.

Last winter, Scott Gorman, 45, an insurance executive, and Michelle Gorman, 49, a tech entrepreneur, started thinking about selling their home in Oakville and moving to Collingwood, where they had long planned to retire. They already owned a ski chalet in the area and their two daughters, Paige, 11, and Rylie, 9, were getting into competitive snowboarding. But if they were going to give up their suburban backyard with a pool, they wanted something that could be used as a summer property.

When Covid hit in March, they spent two full months in Collingwood, and set their plans in motion to look for a cottage nearby. They wanted a small, three bedroom on the waterfront for around $700,000, approximately 30 to 40 minutes from Collingwood. No need for it to be winterized since it would mainly serve as a summer property. On July 22, they listed their Oakville home for roughly $1.3 million. After 60 showings and nine offers, it sold four days later for almost $100,000 over asking, with a 30-day close.

Two days before the sale closed, they found the Wasaga Beach place online. Before visiting the property, they watched the HGTV episode, which gave them some peace of mind that the work was done well. The next day, they learned that an offer had already been registered. Since they felt the property was priced a bit high, they guessed the other bid was likely below asking, so they submitted an offer of $100 over asking, rounding the sale up to $1.1 million, with no conditions. When they hadn’t heard back the next day, they learned the process had been delayed by a third offer, so they decided to up the ante. They refiled their bid, bumping it up by $5,000 to show the sellers they were serious. That sealed the deal. The sellers accepted the same day that Scott and Michelle’s Oakville sale closed.

The buyers, Scott and Michelle, plan to eventually renovate the bunkie into a garage with a loft bedroom. They have no plans to rent out the cottage. Instead, they’ll use it year-round, full-time in the summer and part-time in the winter, with friends and extended family. They already own a set of paddleboards, and the kids said they would forego Christmas gifts if they can get a water trampoline. The sellers, Ryan and Sarah, are still looking for a new place, either a new summer cottage or a full-time country home, near Georgian Bay, Lake Simcoe or the Muskokas.

Here’s the entrance to the cottage. McGillivray restored and painted the original arched door, repainted and sided the exterior, and repurposed an old ski lift they salvaged from nearby Mount St. Louis Moonstone for outdoor bench seating: 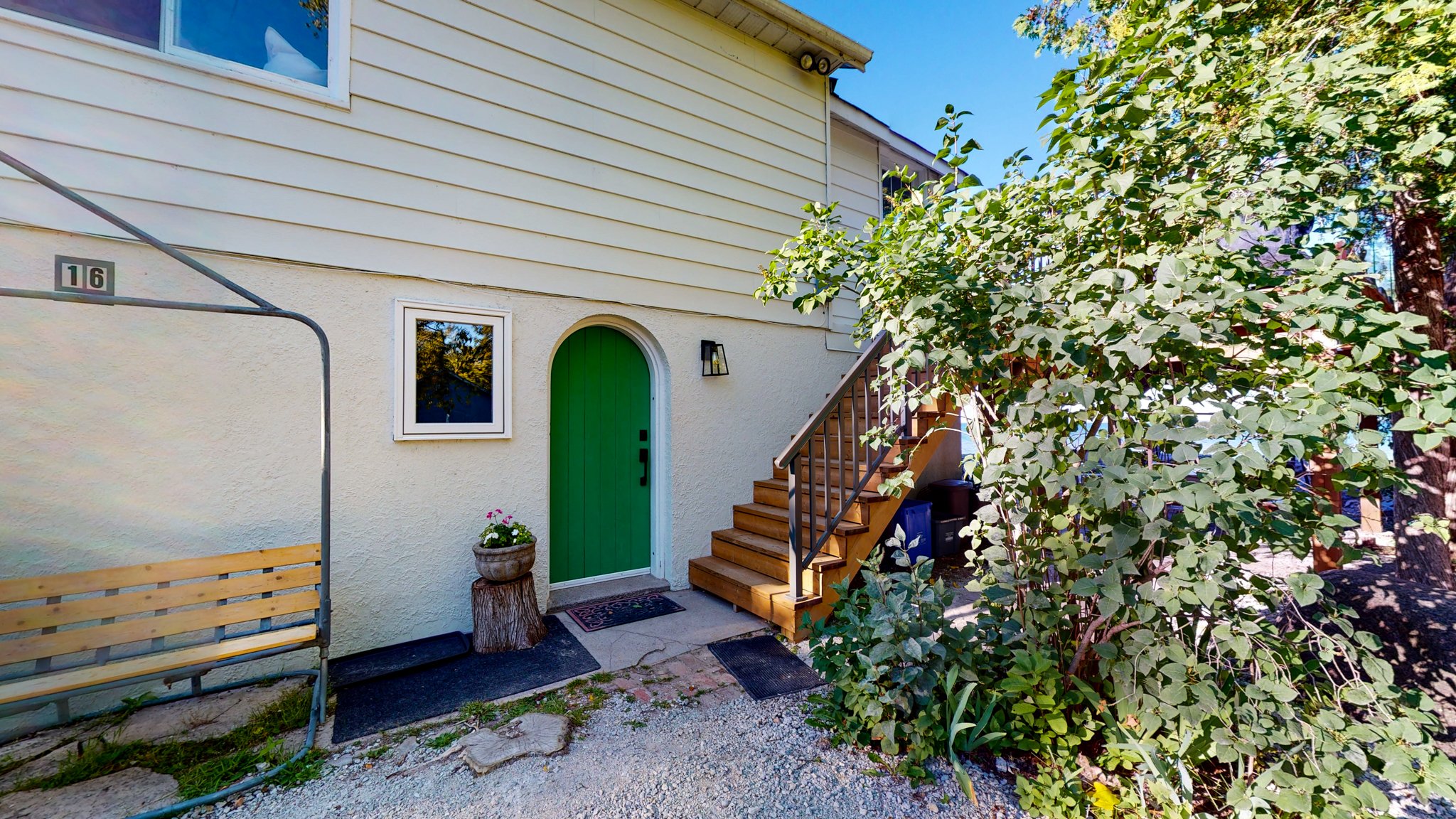 On the show, McGillvary likened the entryway to a dark and cramped “medieval dungeon.” To brighten and open it up, they cut through the plastered cinderblock foundation to add the window, replaced a closet with a bench and hangers, and stripped the walls to add new drywall and white shiplap panels: 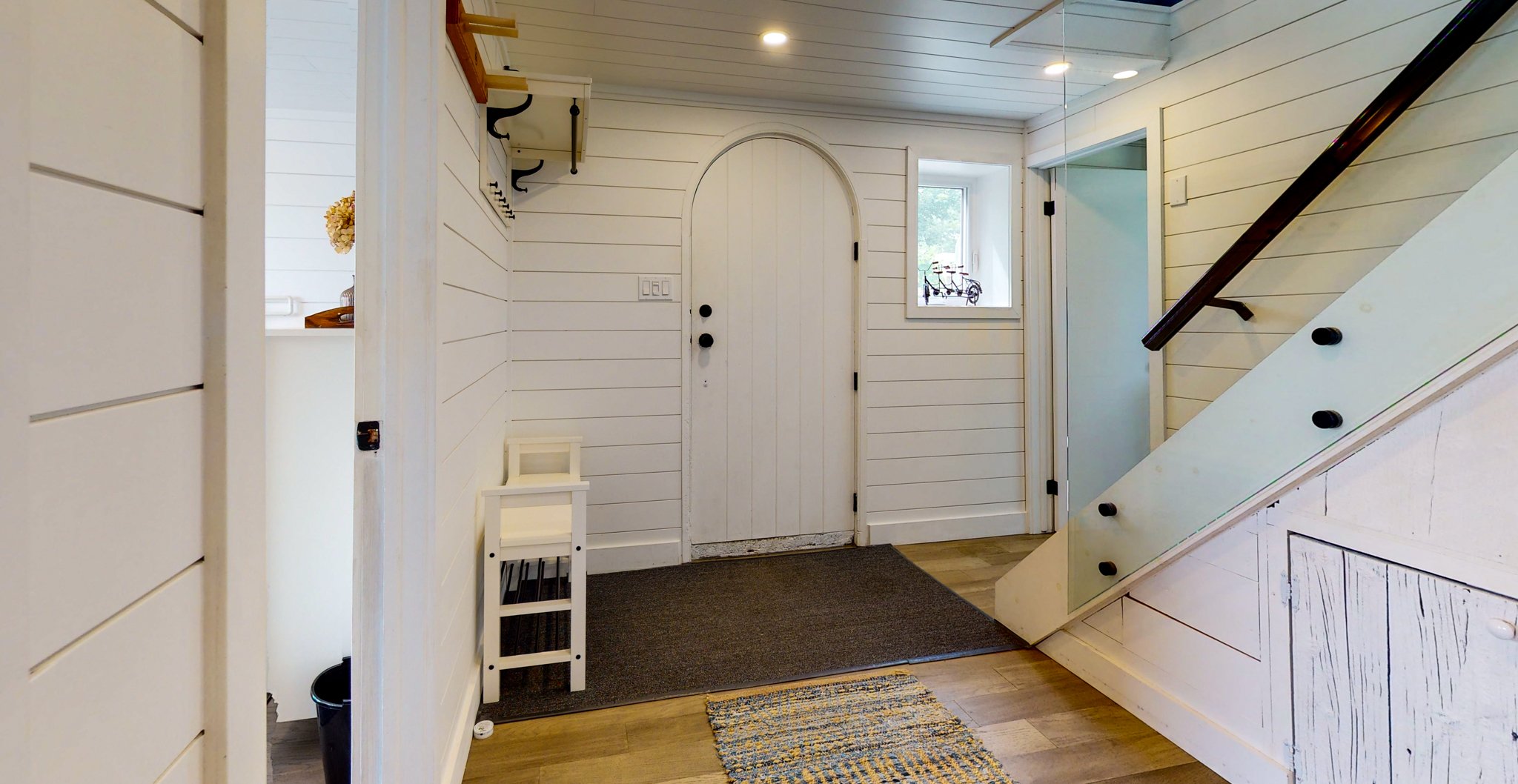 They also installed laminate flooring and a new gas fireplace: 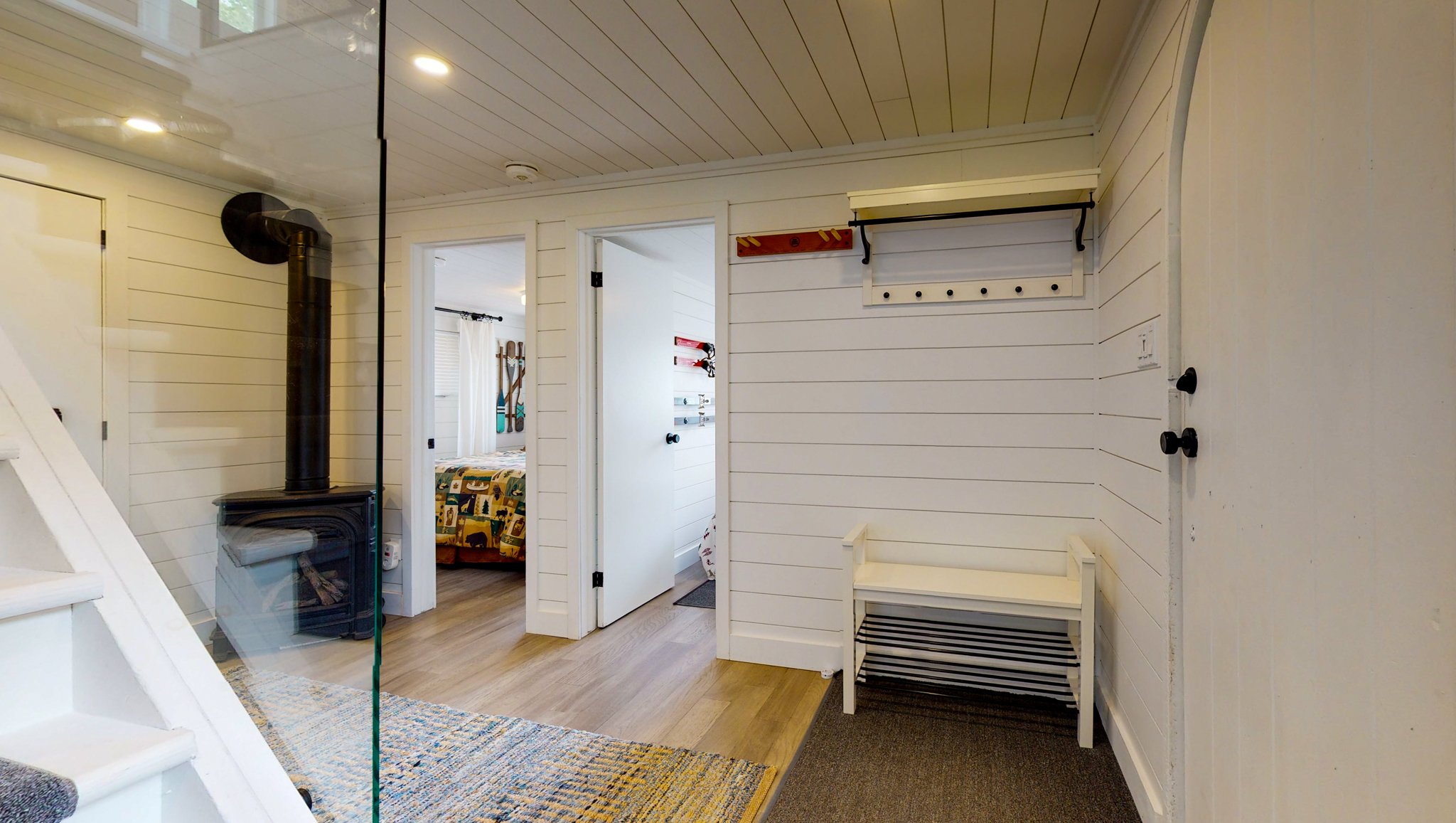 The three bedrooms are themed by season. This is the summer room, which features vintage water skis: 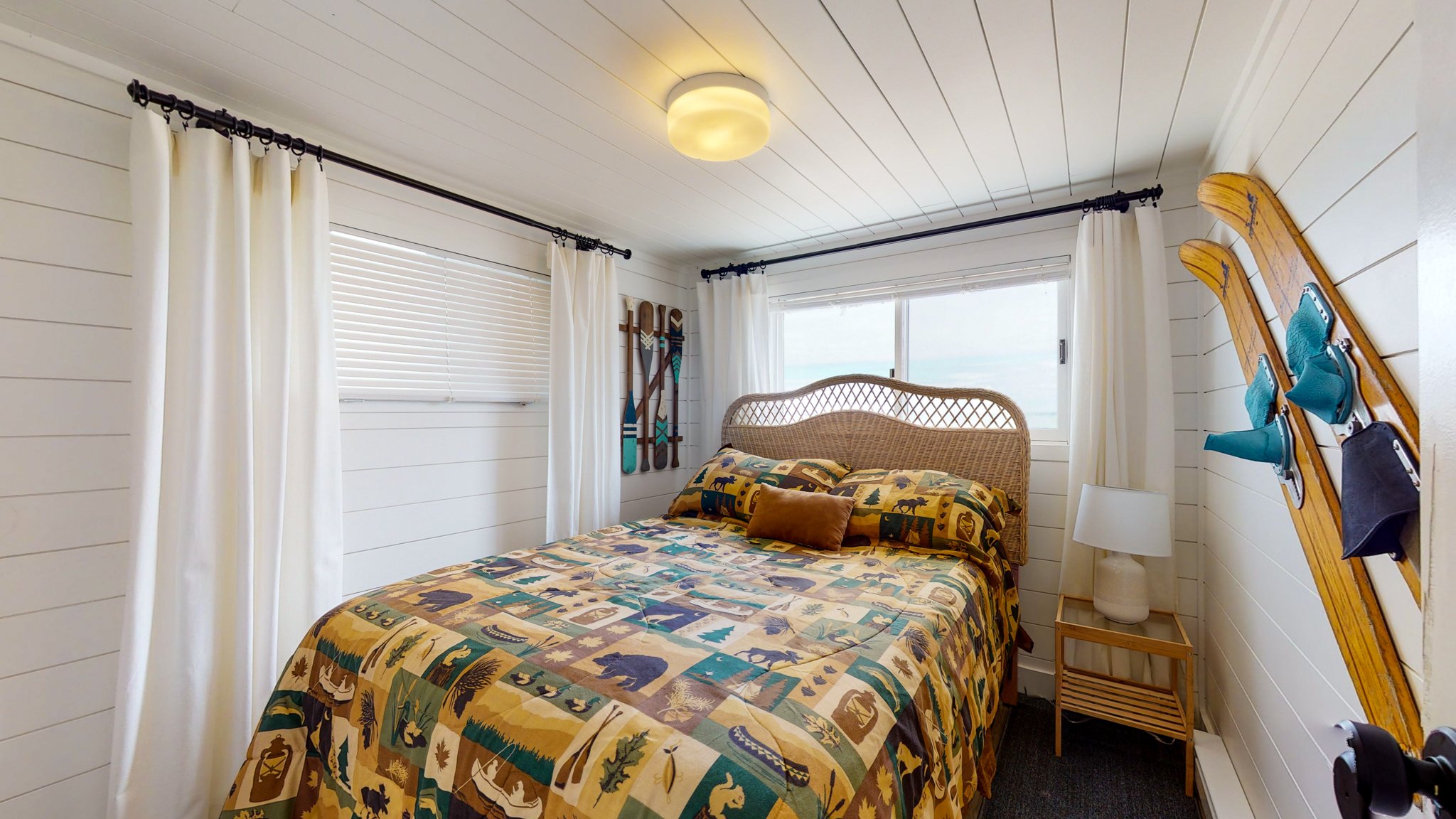 This is the winter room, which features vintage cross-country skis: 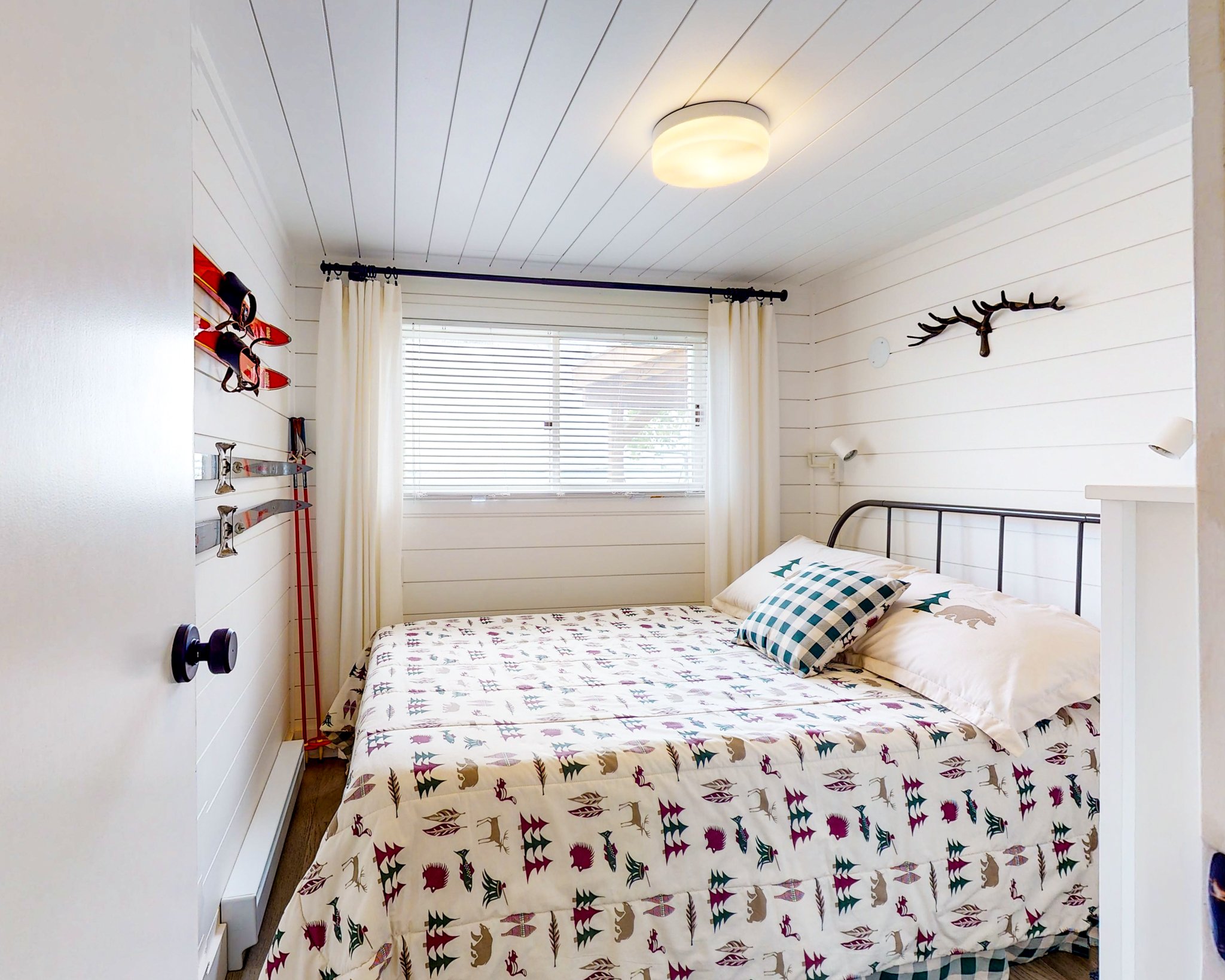 Here’s the spring room, which has a floral theme and faces the back garden: 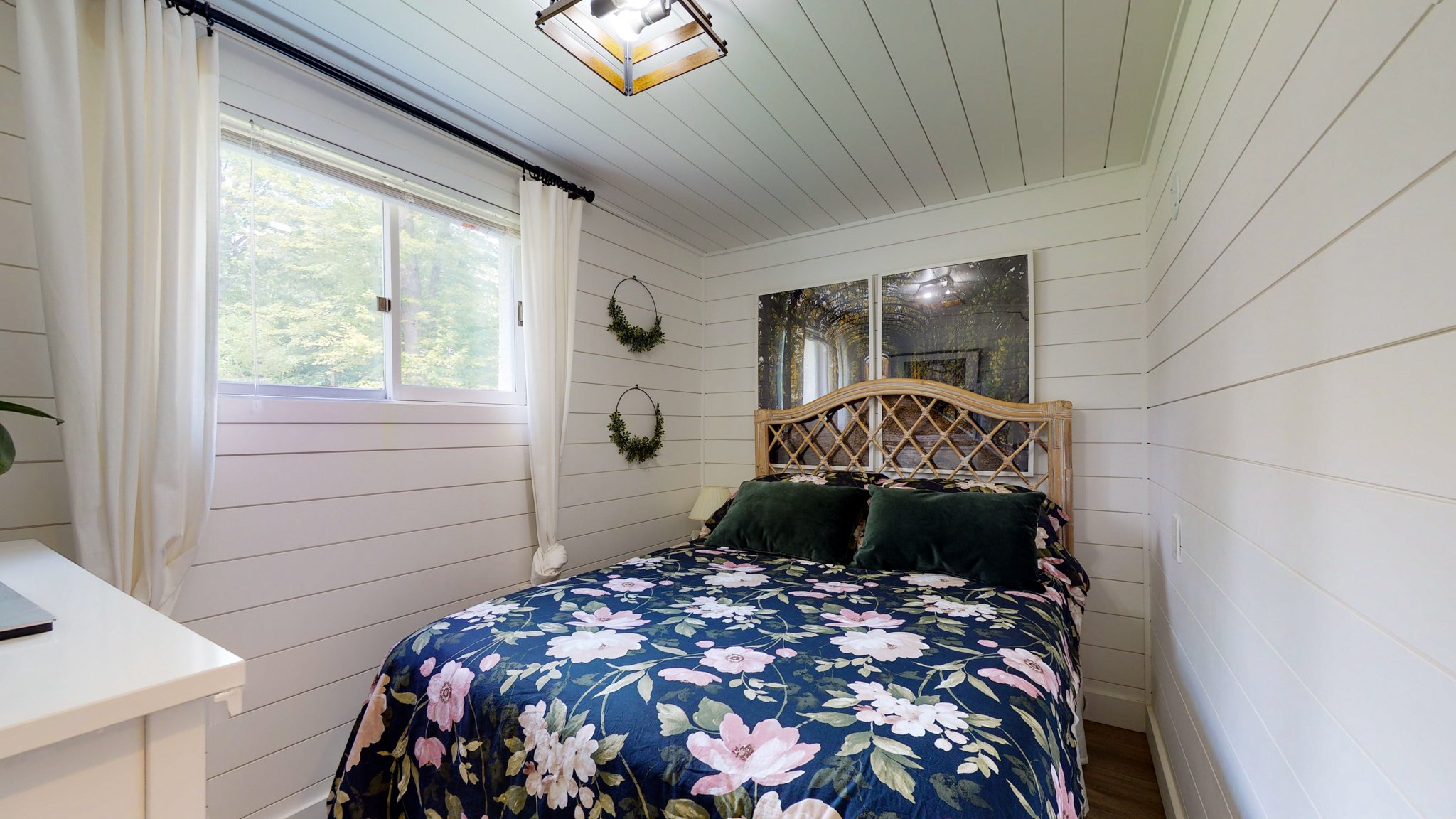 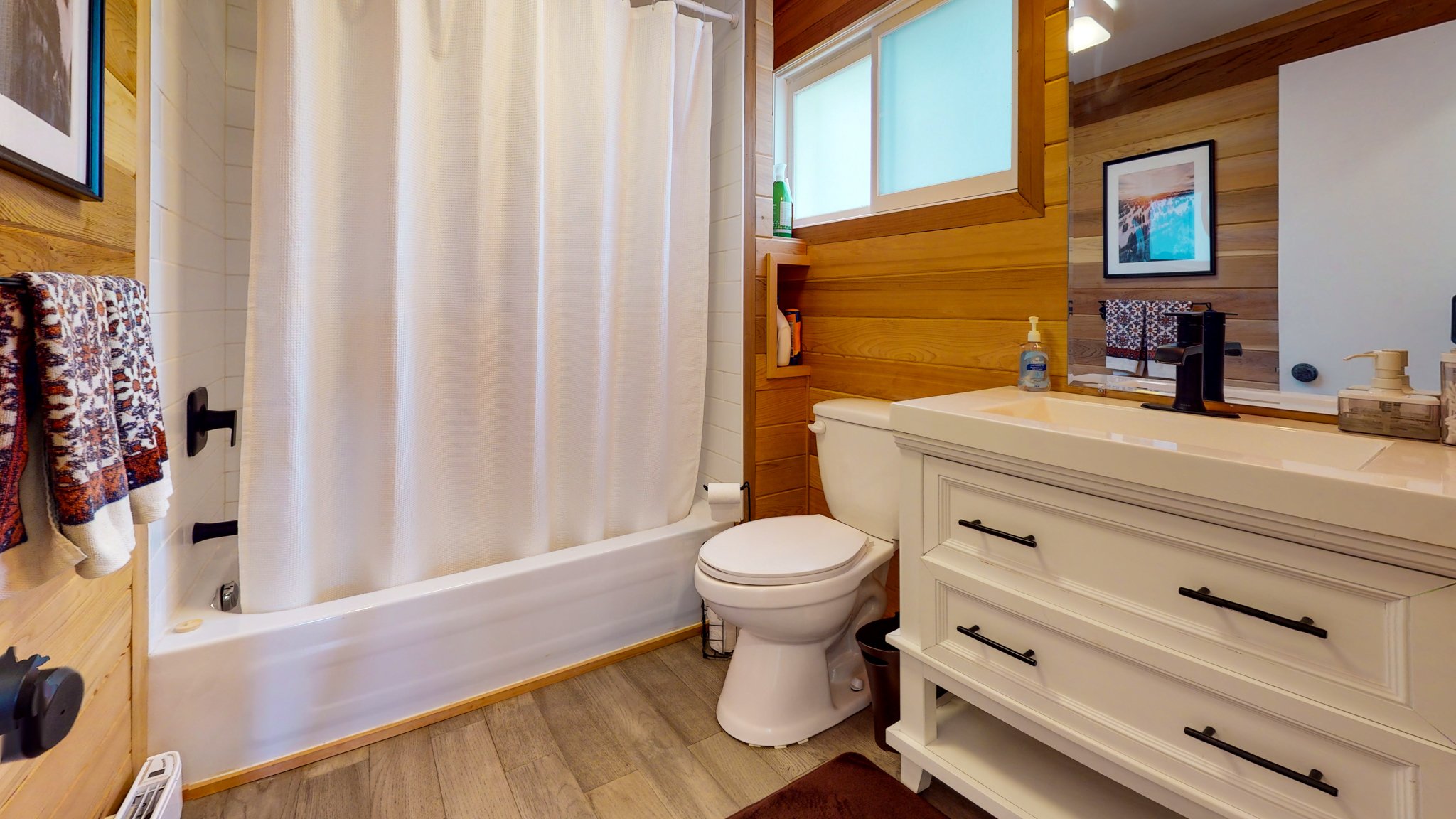 Upstairs, McGillvary sealed off a doorway that formerly led to a back balcony, then extended the kitchen counter space in that direction. They installed the banquette seating in the dining area and added ceramic tile for the kitchen backsplash: 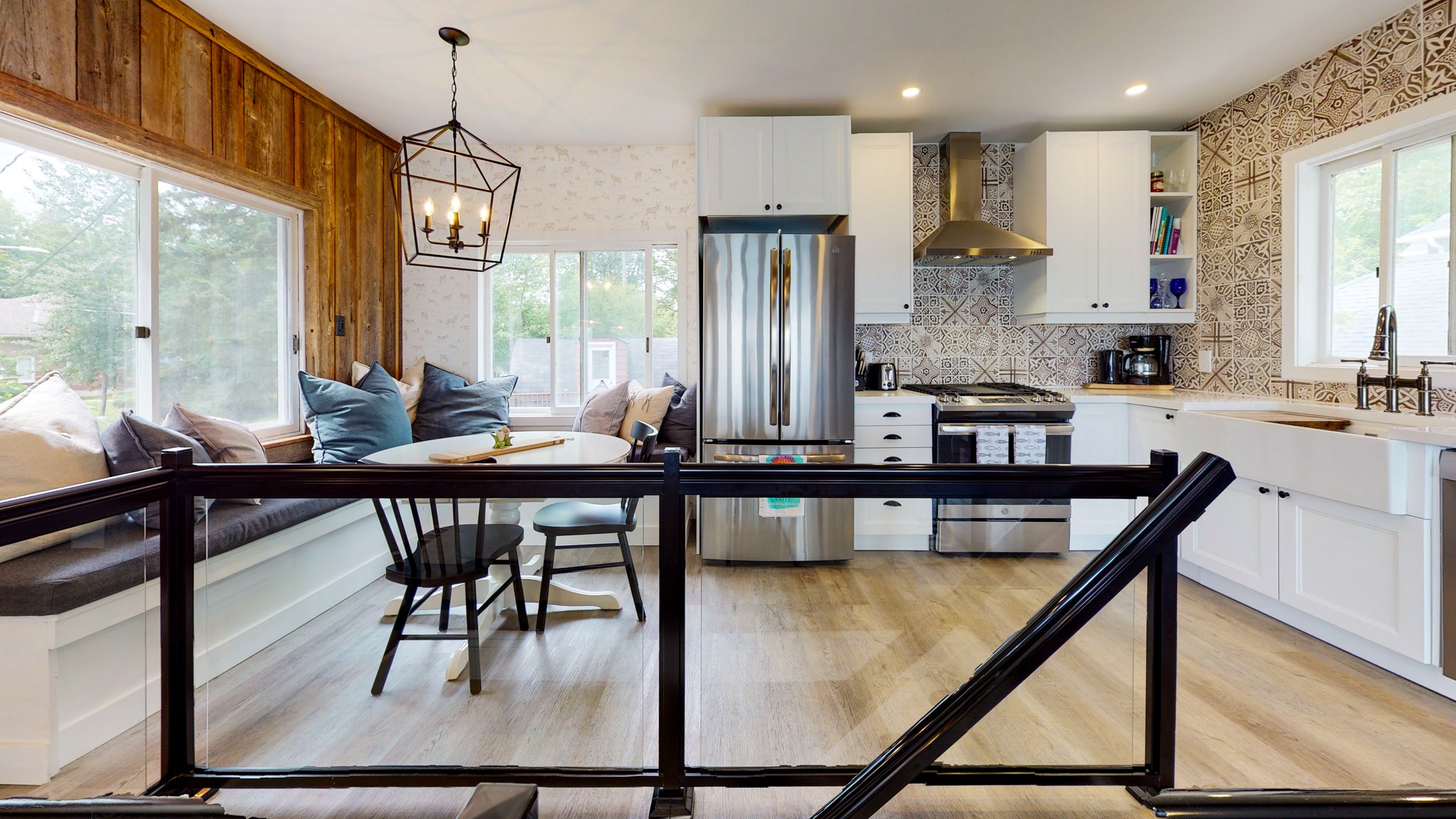 They kept the original barnboard walls upstairs, but replaced the ceiling, added laminate floors and painted the original fireplace: 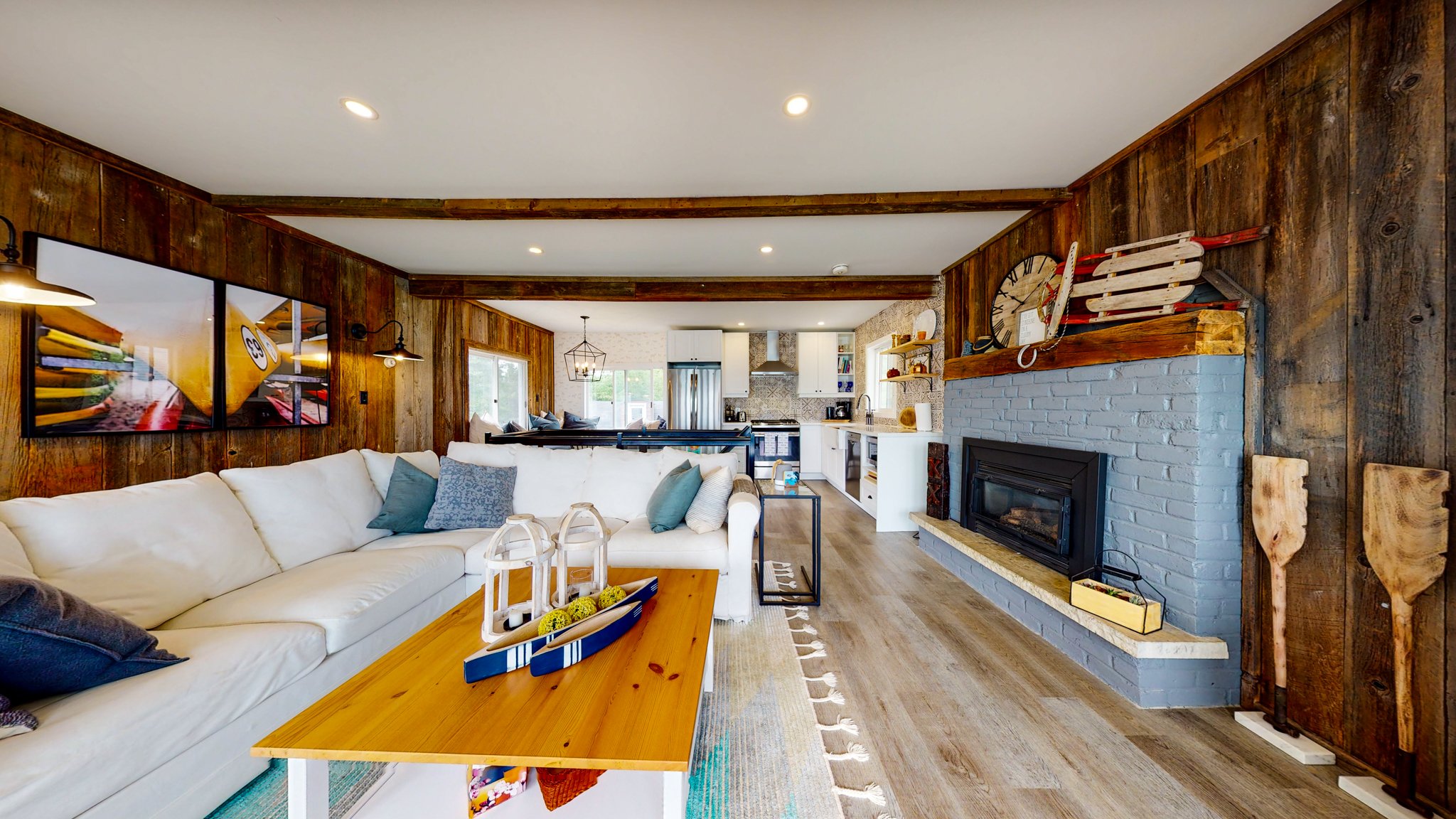 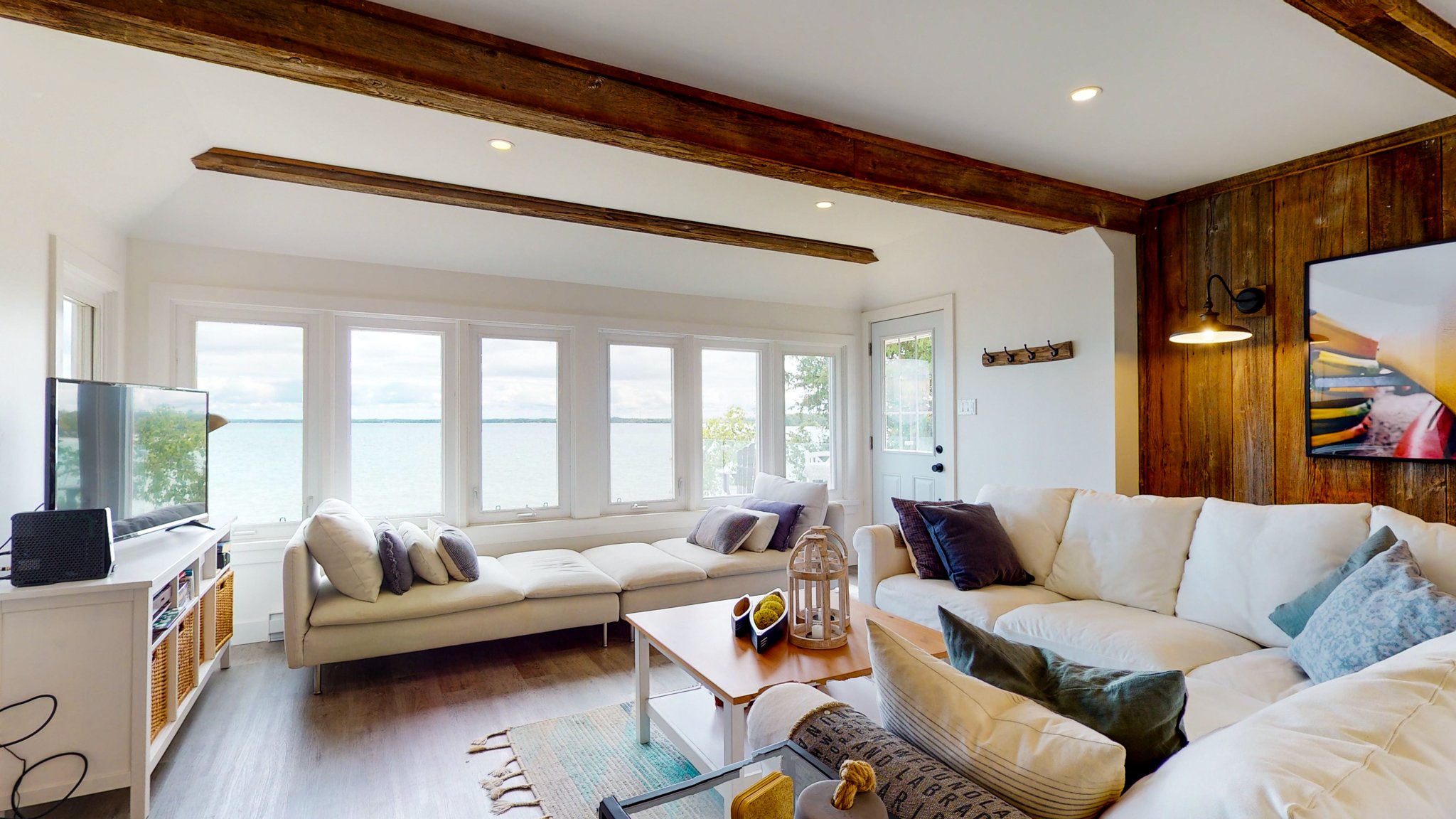 Here’s the new waterfront deck, with a frameless glass rail for unobstructed views of Georgian Bay: 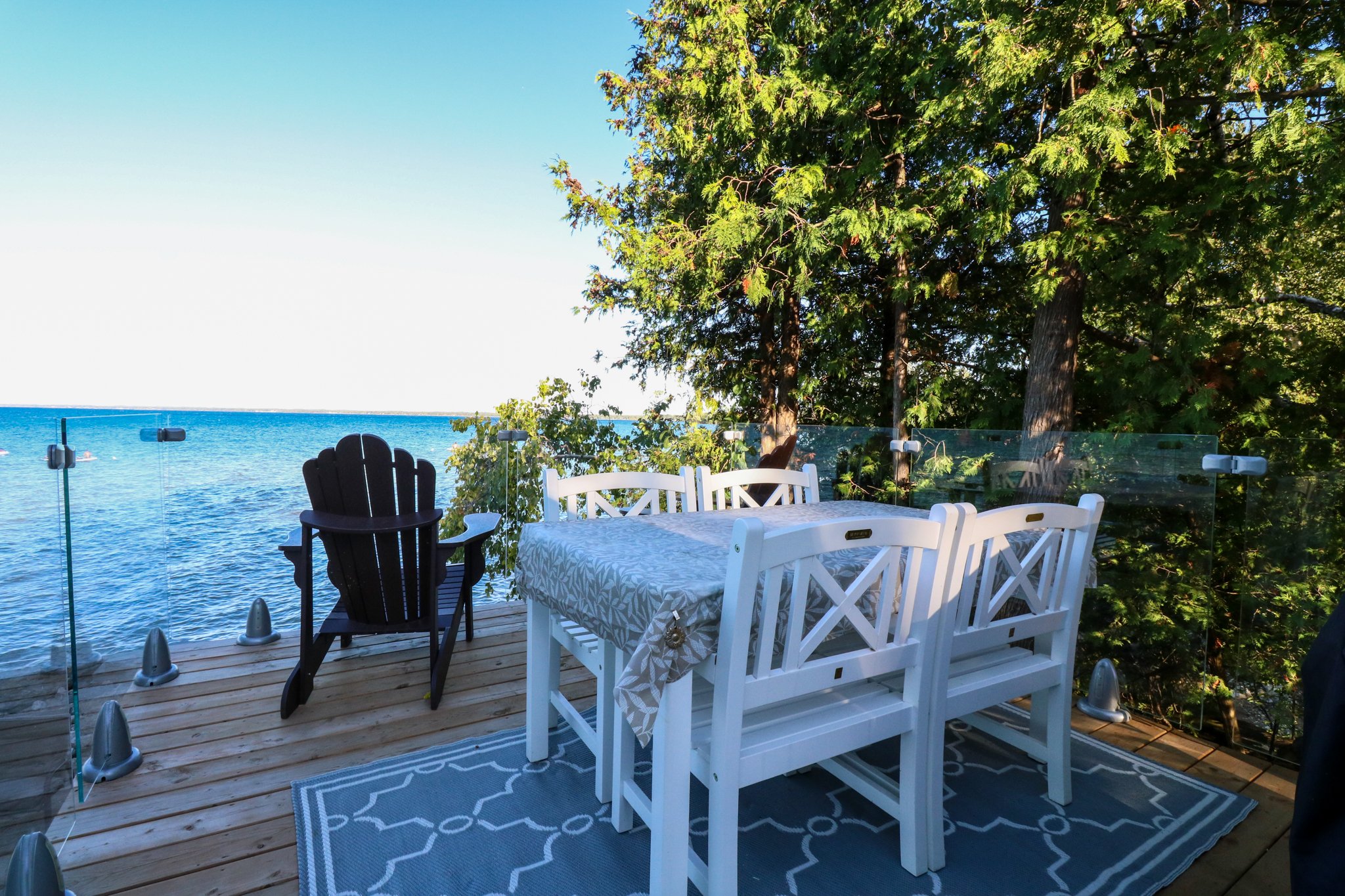 This summer, Ryan and his family added truckloads of sand to the waterfront firepit: 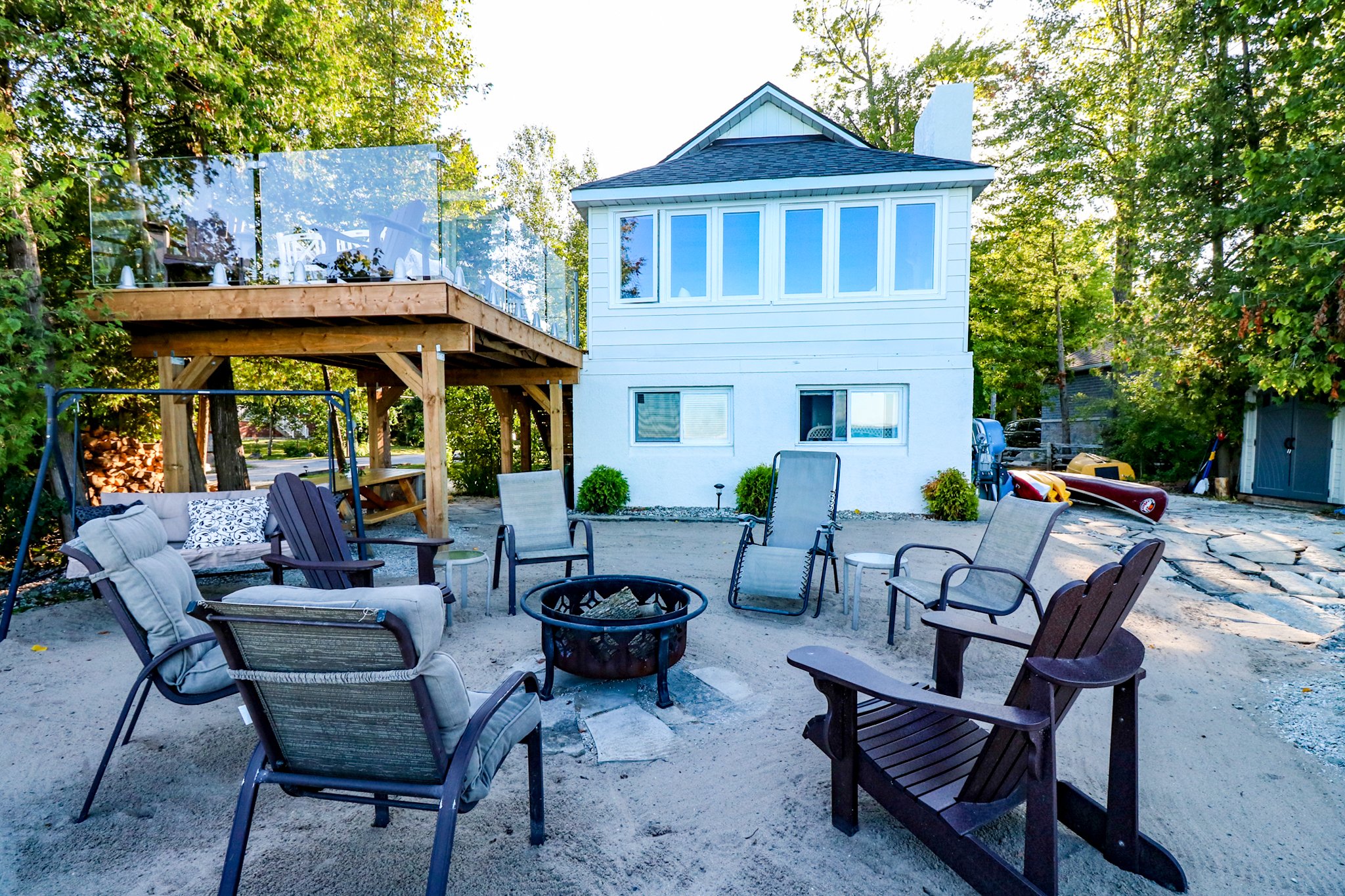 They also added $6,000 worth of boulders and rocks, which helps fight erosion of the shoreline: 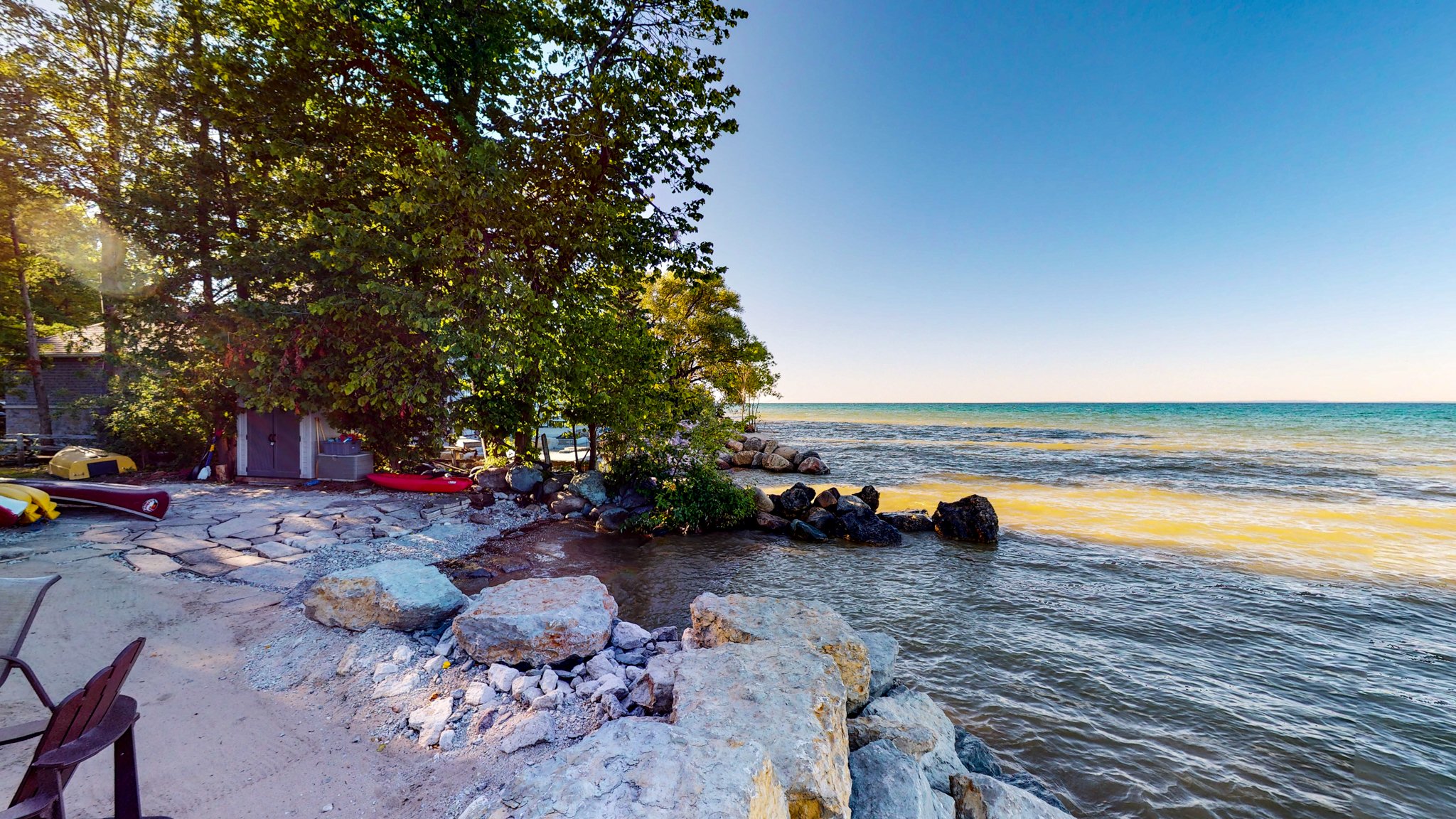 There’s a bunkie in the back, which got excluded from the HGTV renovations. It has two additional bedrooms inside, but no heat source for winter: 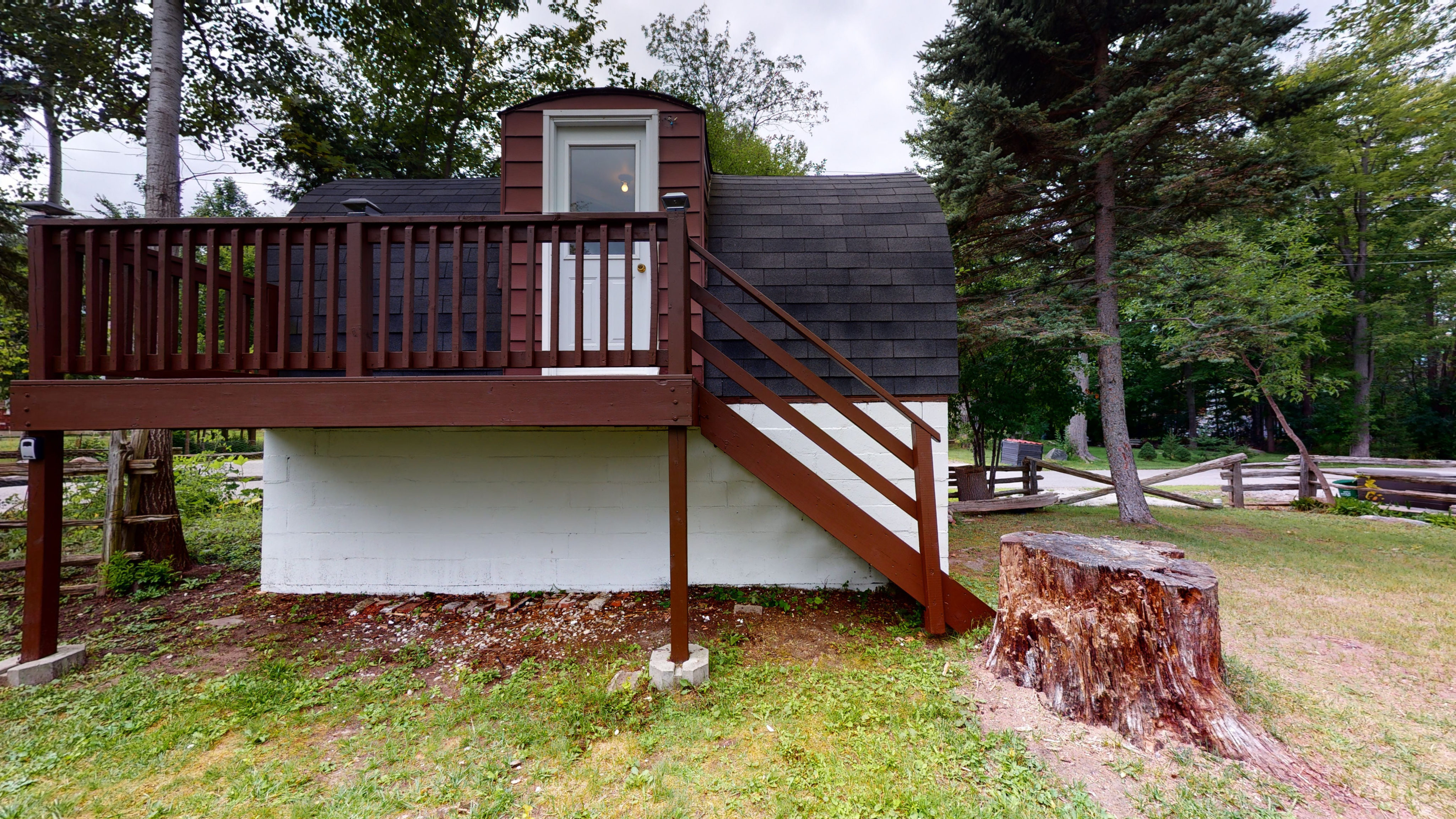 Here’s a view of the back of the cottage. The canoes were added for a pop of colour by the HGTV team: 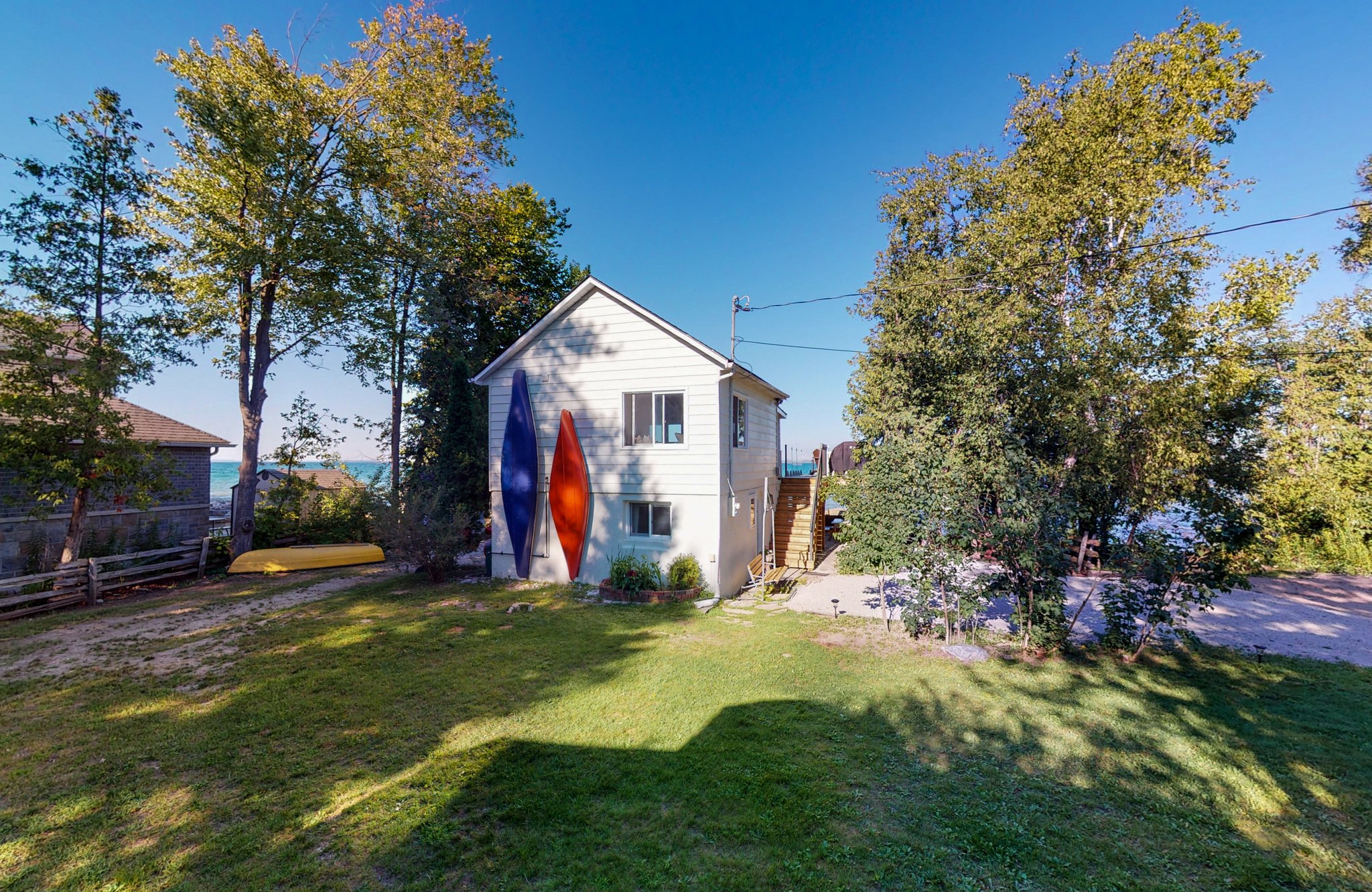