The buyers: Dawn Pilgrim, a 40-year-old project manager with the Ontario Ministry of the Environment, and her daughters, Tyreah, 20, and Olivia, 18.

The story: Pilgrim had lived with her daughters in Markham since 2006, and she’d never seriously considered moving closer to the core. The commute was a slog (she works at Yonge and Bloor), but she loved her big yard and wide suburban street, and knew she’d be unlikely to find something similar in the city. Then Tyreah got accepted to Ryerson, and Olivia started talking about studying there, too. Dawn didn’t want the girls living on their own—or spending hours on the GO train each day—so she decided it was time to abandon the burbs. With help from Alexander Evans of Real Estate Brothers, she started searching for a three-bedroom house that worked for the whole family.

Pape Avenue (at Queen East). Listed at $879,900, sold for $965,133.
They’d barely started the hunt when they came across this three-storey semi in South Riverdale. It had much of what they wanted, including a decent-sized backyard and three large bedrooms. Pilgrim bid $60,000 over asking but got eliminated in the first round.

Lumsden Avenue (near Woodbine and Cosburn). Listed at $950,000, no longer on the market.
They’d viewed several more places, but Tyreah and Olivia weren’t sold on any of them. This semi seemed promising: it even had a basement nanny suite where the girls could enjoy a bit of privacy. But when they toured the space, they noticed a musty smell—and decided it was a deal breaker.

Whistle Post Road (near Main and Gerrard, pictured above). Listed at $859,999, sold for $925,000.
They’d toured five homes in a single weekend when they saw this four-bedroom semi. It was even better than the one they lost out on, with two big bedrooms for the girls and a master suite on the third floor. The clincher was that the neighbourhood reminded Dawn of home. She tried a bully bid of $885,000, but it was refused. A week later, she offered $910,000, then added another $15,000—enough to beat out the competition and get them into their new home before Christmas. 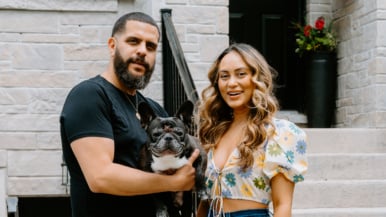 Krystal and Phil had set a $1.5-million budget for a move-in-ready three-bedroom with ample space for a family as well as a yard for their dog