The story: In early 2020, Kasey lived in a two-bed, one-bath detached house in Leslieville. At the time, her brother Terry was staying in a three-bed, one-bath home in Burlington that had belonged to their parents, who passed away in the past decade.

In the summer of 2020, Kasey and Terry decided to sell the Burlington home because it was too much work for Terry to maintain. Profits from the sale were minimal, leaving Terry without enough money to purchase his own place.

Terry considered moving in with Kasey. But he uses a walker and her home’s bathroom is on the second floor, making it difficult for him to navigate.

The Watsons considered building an addition on Kasey’s home, adding another bedroom and a bathroom, but Kasey was hesitant to live through a prolonged construction project—she had just endured a four-year condo build in her neighbourhood. In September of 2020, Terry rented a studio apartment in Riverdale, for $2,000 a month, while they figured out a longer-term housing plan.

Meanwhile, Kasey was researching housing solutions and learned that the city had recently legalized laneway suites. But the projects she had come across were too big and expensive, priced at $300,000 to $400,000. Plus, her backyard had less than 900 square feet of space.

Then, in January of 2021, Kasey came across an article for a company in Mississauga, Ballance Containers, that manufactured bunkies and laneway suites out of shipping containers. Kasey thought it’d be the perfect solution.

It was cost-effective, coming in at approximately $130,000. The home would occupy under 250 square feet and could be manufactured off-site, minimizing construction headaches. Terry joked to Kasey that he’d be living in a tin can, but he also liked the idea of being close to his sister while still having their own spaces.

In February of 2021, Kasey reached out to Ballance Containers. They had drawings and an estimate ready within a week. The company had initially developed a 245-square-foot, square-shaped design of two shipping containers next to each other. But, unfortunately, the plans were rejected by the city in May of 2021.

Instead, the designers opted for a longer, rectangular shape. It was slightly smaller, at 220 square feet, but still had enough space for all of the essentials. 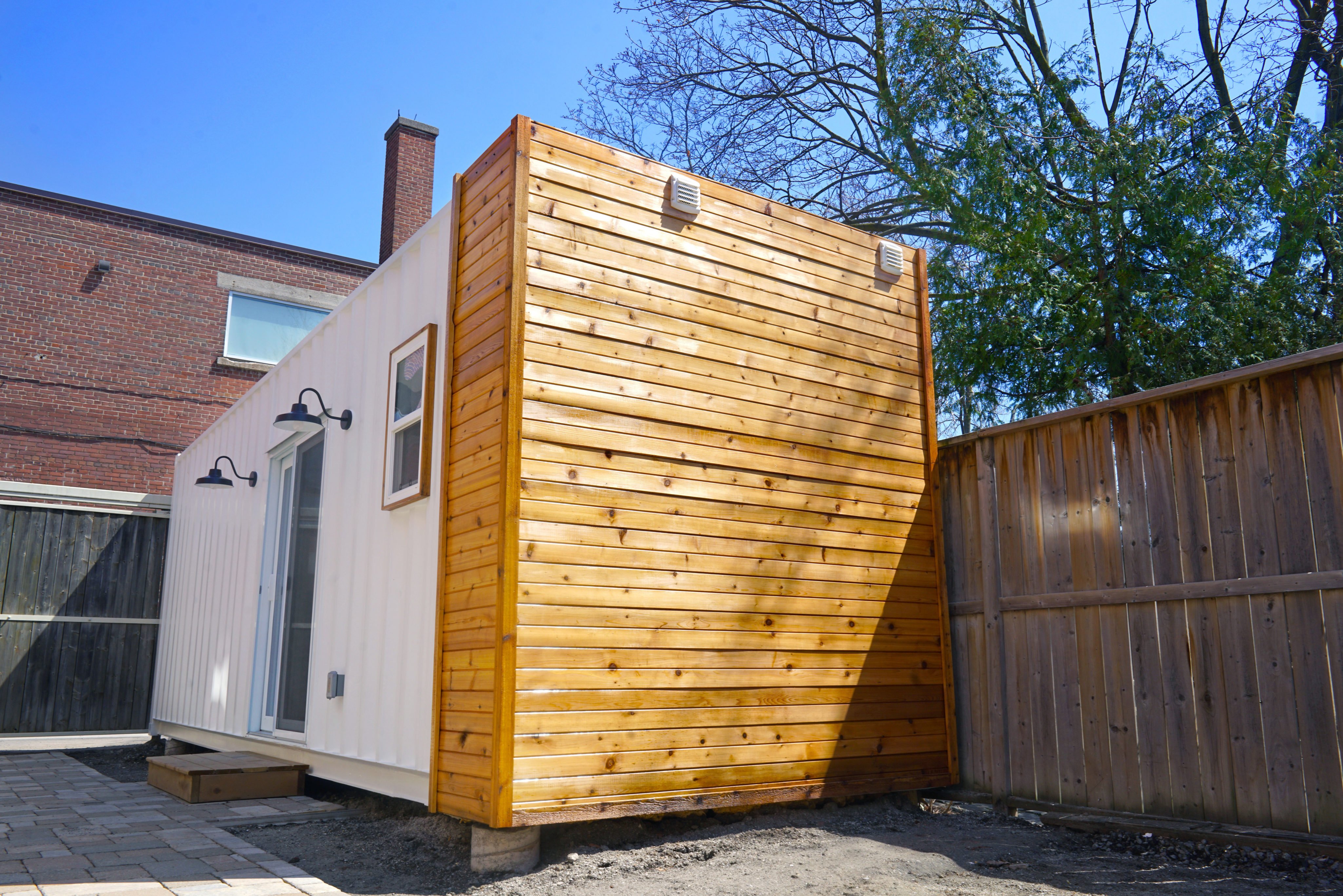 There’s a step up to the entrance—sliding doors that offer extra ventilation in warmer weather.

The kitchen area has a two-burner electric range with a ventilation hood. Terry opted to keep the cabinets open, without doors, so it’d be easier for him to access items while using his walker.

The bathroom is to the right of the entrance. The shower has room for a seat, and next to it, a small sink and a toilet.

Kasey and Terry actually received the toilet as a gift from a friend when they found out the siblings were embarking on the build.

“That was kind of a joke,” says Kasey. “I got a toilet with a big red ribbon on it.” The pocket door of the bathroom slides into the wall—another space-saving and accessibility-friendly feature. 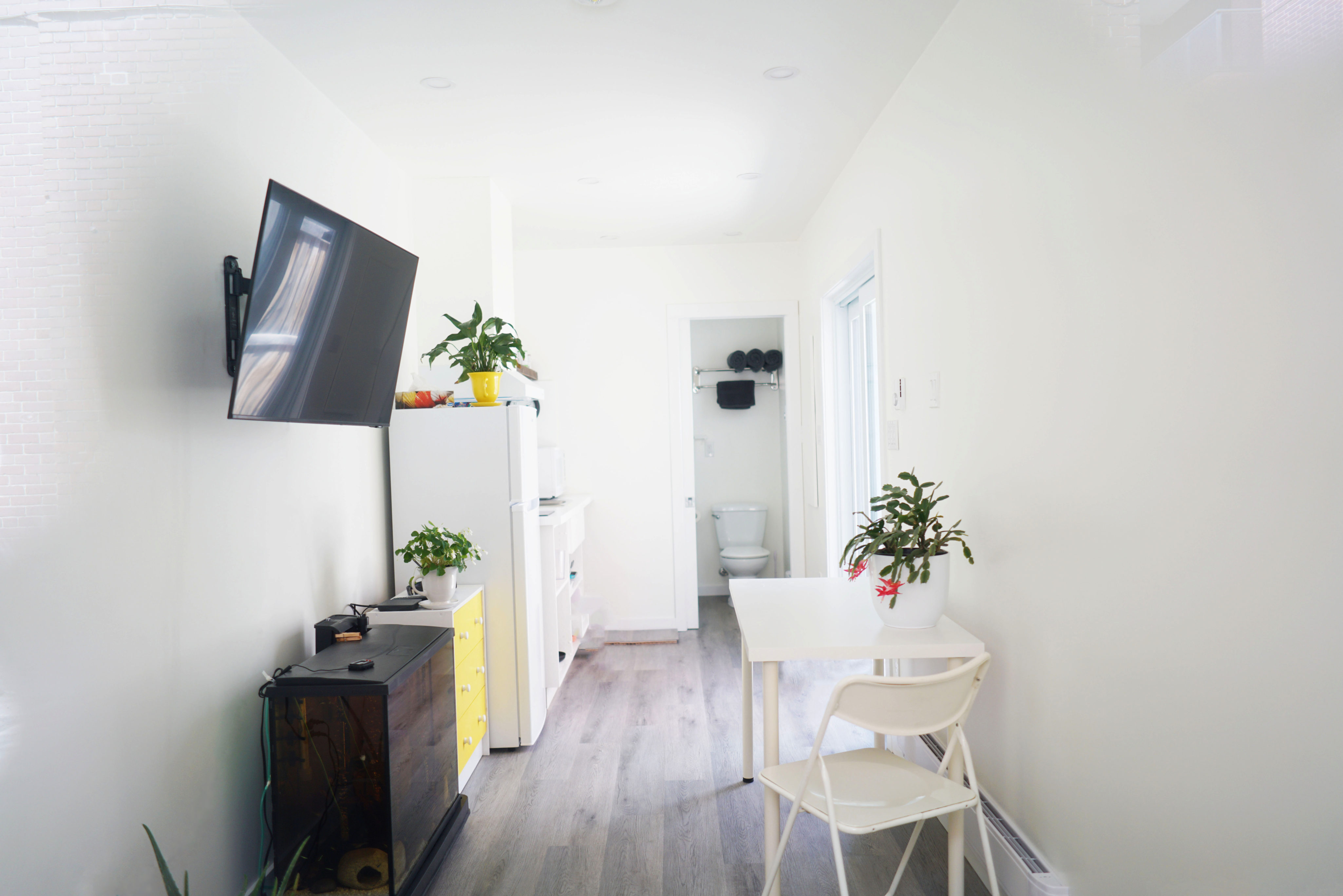 To the left of the kitchen is Terry’s living and sleeping area.

There’s space for a desk, where Terry can eat and work on his hobbies, like building model car kits. He’s also got an aquarium for his pet fish. 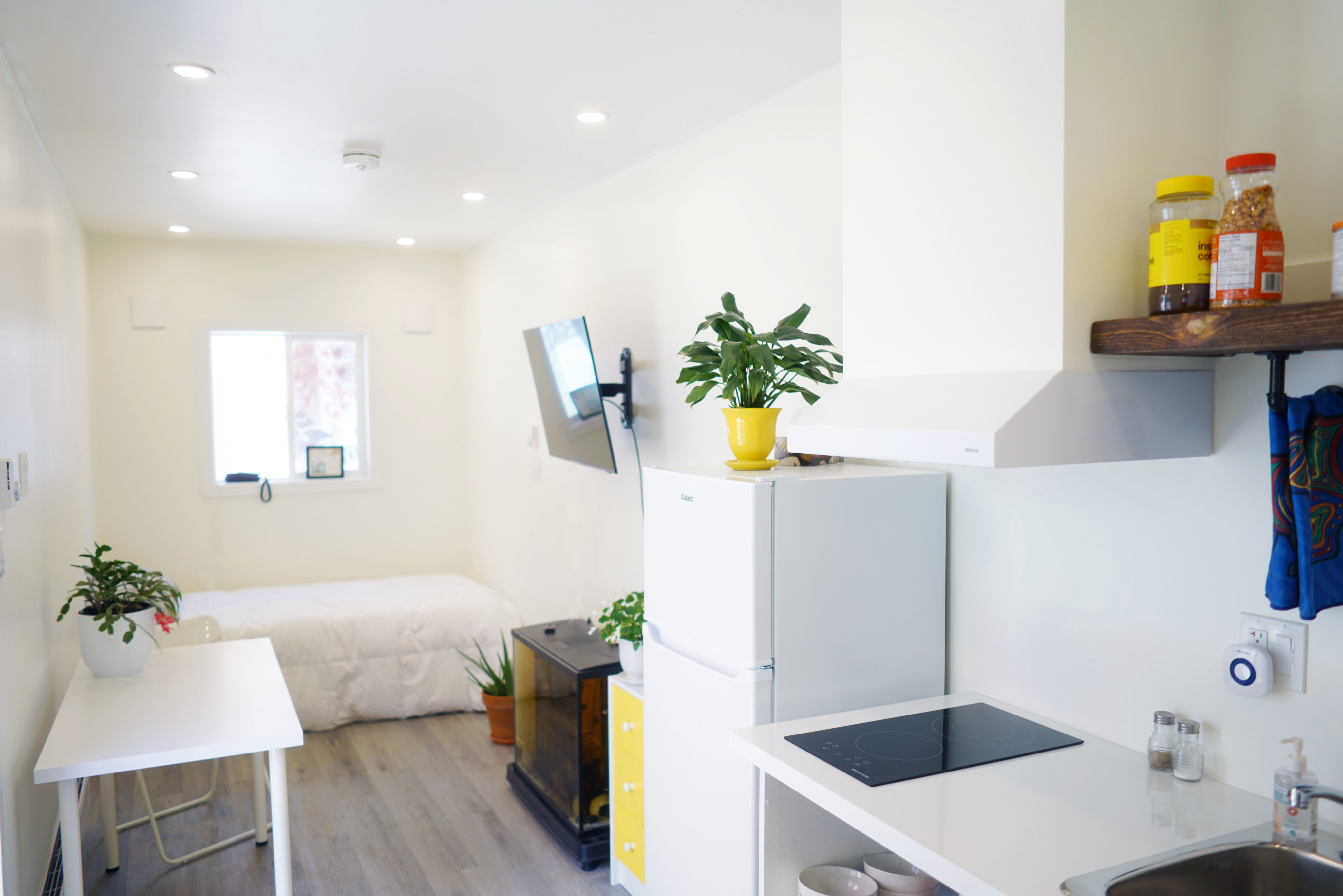 A twin bed tucks nicely into the end of the unit.

The container has baseboard electric heating but no cooling system— they’ll consider installing a portable air conditioner once the summer hits, but Terry says he doesn’t mind the heat.

Since the manufacturer cut the end off of a 40-foot shipping container to make the home, they sealed off the open end with cedar planks. The container was sourced from a local broker who sells containers that have moved shipments of cargo from Asia to Toronto.

Plans for the new build were submitted in July of 2021 and approved at the end of October. In December of 2021, they began preparing the ground for the container. Construction workers excavated the site where the suite would be placed and poured in four cement piers to hold up the container.

Meanwhile, the unit itself was being built out at Ballance Containers’ fabrication shop in Mississauga. Everything would be done there, from the walls and flooring to the kitchen installation, sink and shower.

The outcome: On January 15, 2022, the finished container was craned into Kasey’s backyard and placed onto the cement piers.

It only took workers a few days to hook up the water and electricity connections. A city inspector gave the home its safety stamp of approval at the end of January. Terry packed up his belongings at his Riverside apartment and moved into his new container home on February 25, 2022.

The Watsons feel confident that the laneway container suite was a good investment. Should Terry need to move out of the home, they would rent it out to a tenant.

And if Kasey needed to sell her home, having the suite as part of her property would help increase its value. But they both hope to stay in their homes through their retirement.

Kasey and Terry are enjoying their new living setup so far. They see each other at least once a day. Terry comes into Kasey’s home to do laundry every so often.

And Kasey has her brother over for a meal at her house a few times a week. Although, she jokes, the opposite hasn’t happened. “I haven’t been invited over there yet,” Kasey says. “But that’s okay.”

Do you have an interesting real estate story? We’d love to hear it, especially if it’s about laneway containers, garden suites or iceberg houses: realestate@torontolife.com