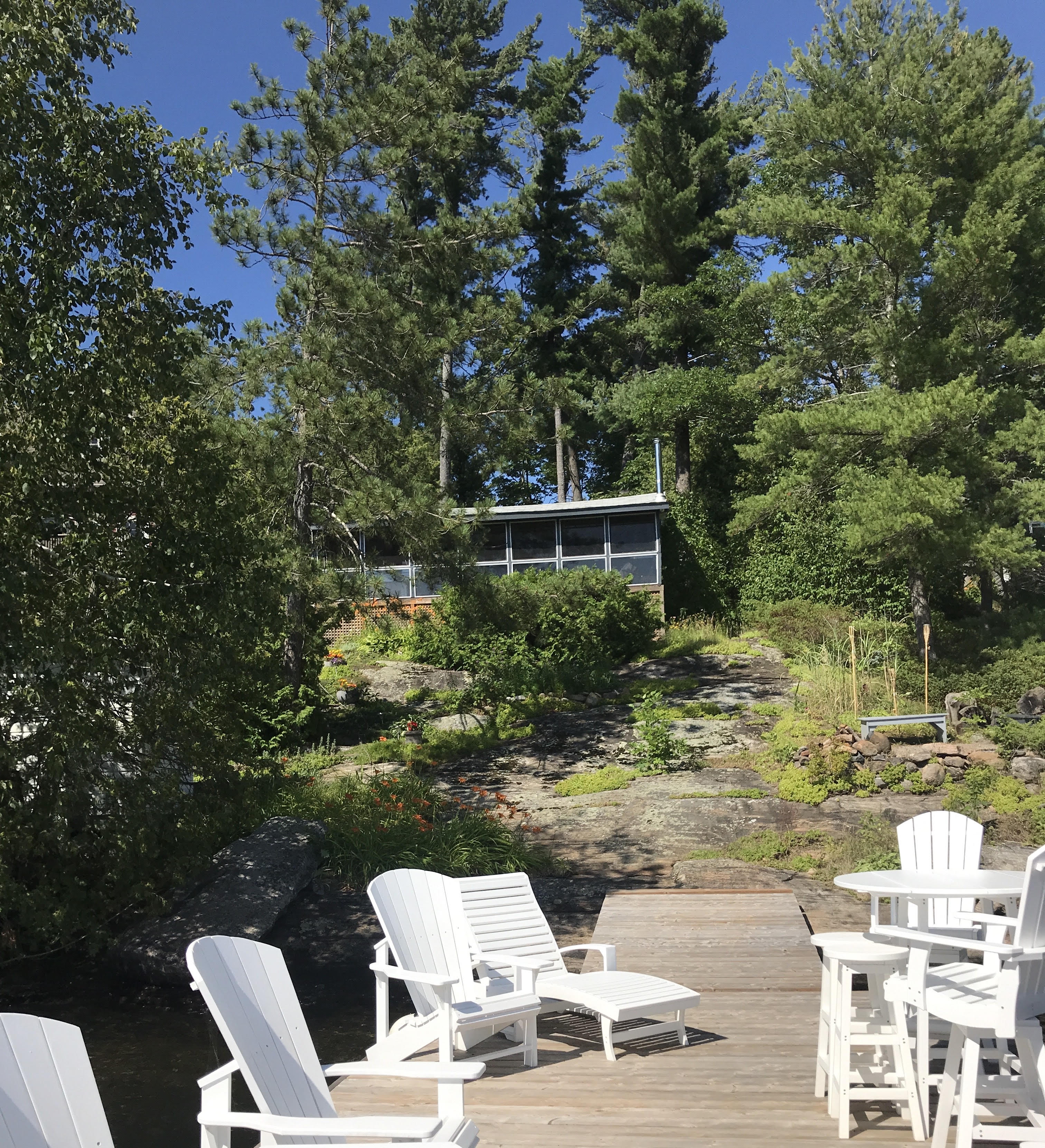 A two-bed, one-bath cottage on Lake Muskoka. Nestled amid towering pine trees on a small lakeside lot, the 950-square-foot getaway has a cozy, pine-filled interior, with a wood-burning stove and a good-sized sunroom that overlooks the lake. There’s also a one-bedroom bunkie on the property. The cottage is just a five-minute drive from the town of Gravenhurst, and a quick boat ride from the Muskoka Wharf, with its many attractions, including a sprawling boardwalk, lakefront restaurants and boutique shops.

In 2009, Heather, a long-time Muskoka cottager who lives in Summerhill, bought the place with her ex-husband for $350,000. It was in rough shape. In the main cottage, ceilings were damaged, doors were rusted, pipes were broken. And the walls were painted an unappealing dark red. Renovations started that September. Inside the main cottage, they added white beadboard wall panels, laminate flooring and pine ceilings. They also laid a new brick patio at the front of the property.

In 2016, the couple divorced, but Heather continued to use the cottage for herself. In 2018, she started dating Jay and over the next two years, the couple—who always brought along their dogs, Holly and Buttercup—felt like they were outgrowing their place. Then Covid hit and set everything in motion. In May, Heather read that interest in the cottage market was surging, driven by Toronto-area buyers fleeing the city during lockdown. It felt like a good time to sell the place and cash out. On May 20, they listed the cottage for $759,000. At the time, open houses were still prohibited in Ontario and real estate agents only provided access to serious buyers. More than 20 people visited the property in separate showings.

In early 2020, Jeff and Stephanie Hume, an HVAC specialist and nurse, respectively, started seriously considering a full-time move from Hamilton to cottage country. Stephanie had long envisioned raising their four girls—all of whom are under the age of 12—on a lake. The parents weren’t concerned about finding new jobs, but worried about their girls adjusting to a new school. When classes moved entirely online in the spring, trading life in Hamilton for cottage country finally seemed like a real possibility.

The family wanted a waterfront property with a nice view, located near a town centre for easy access to restaurants and grocery stores. Ideally, the cottage would be winterized and have a bunkie that the girls could make their own. They first considered a few places near Bala, at the northwest end of Lake Muskoka, but the cottages had steep, long, potentially slippery driveways. Plus, the roads leading to the properties wouldn’t be plowed by the township in the winter, so they didn’t make any offers.

In late June, they saw the listing for Heather’s cottage, which included a 3D virtual tour. It ticked a lot of their boxes: a good view, close to town centre, a bunkie. There were only two bedrooms in the main cottage, but once they winterized the bunkie, there would be plenty of room for all six of them to sleep. The place needed some other upgrades, too, nothing Jeff and Stephanie weren’t willing to tackle.

They bid $745,000, sight unseen, factoring in the sale price for similar properties in the area and the cost of future renovations. The sellers, Jay and Heather, accepted the Hume’s offer, conditional on the family visiting the place. The next day, all six of the Humes went to see the cottage and sealed the deal.

Later that summer, the Humes sold their Hamilton home, Stephanie landed a new job in Bracebridge and Jeff transferred his work to the area, too. They moved in shortly after the September 1 closing date and started the necessary upgrades, including new baseboard heaters, insulated windows and a new waterline. In the bunkie, they added a TV, pull-out couch and small gymnastics area for the girls. So far they’ve spent about $15,000.

Heather and Jay, who recently eloped at Manoir Hovey, a boutique hotel on Lake Massawippi in Quebec, are on the hunt for a new cottage. They’re looking at listings for properties on the “big three” lakes—Joseph, Rousseau and Muskoka—but will probably wait until next year to buy something.

Heather added the interlocking brick patio when she bought the place with her ex-husband, back in 2009: 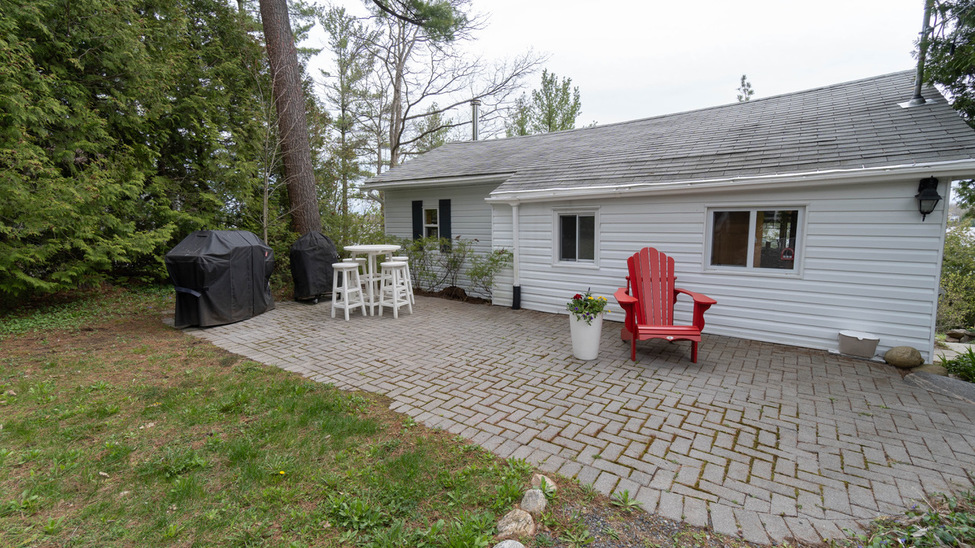 Here’s the main living area, which has plenty of pine—everything from the sliding door to the ceilings: 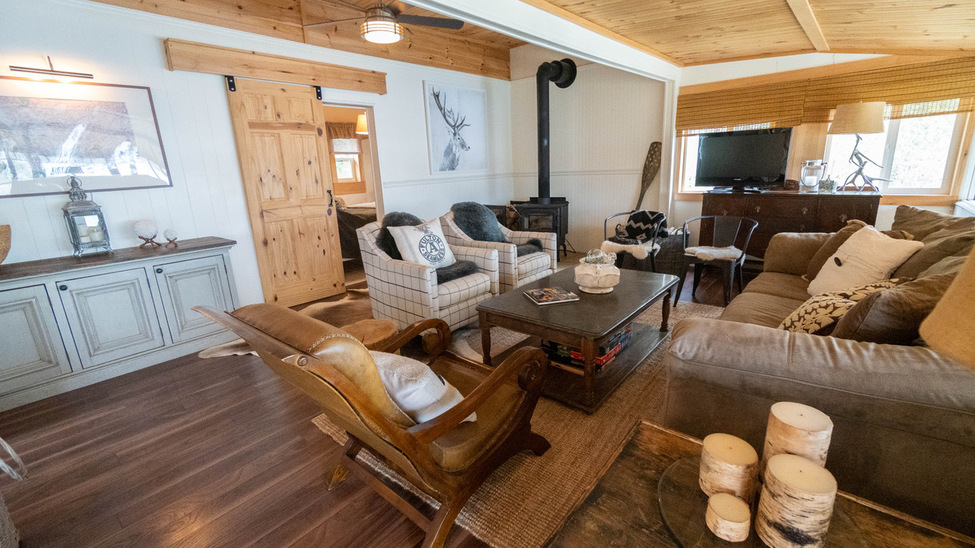 The dining area connects to the Muskoka room: 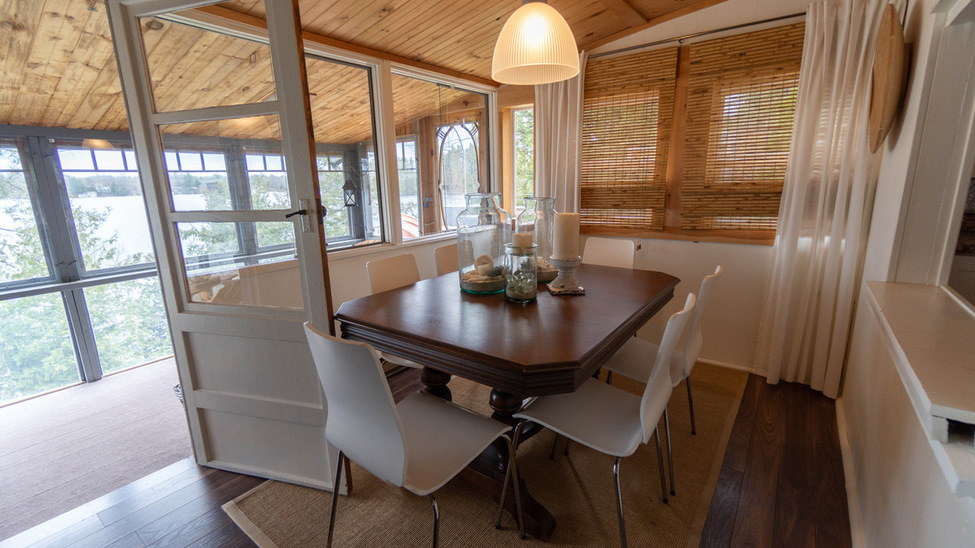 Previous owners built the Muskoka room, where cottagers can look out at the lakefront through plexiglass windows: 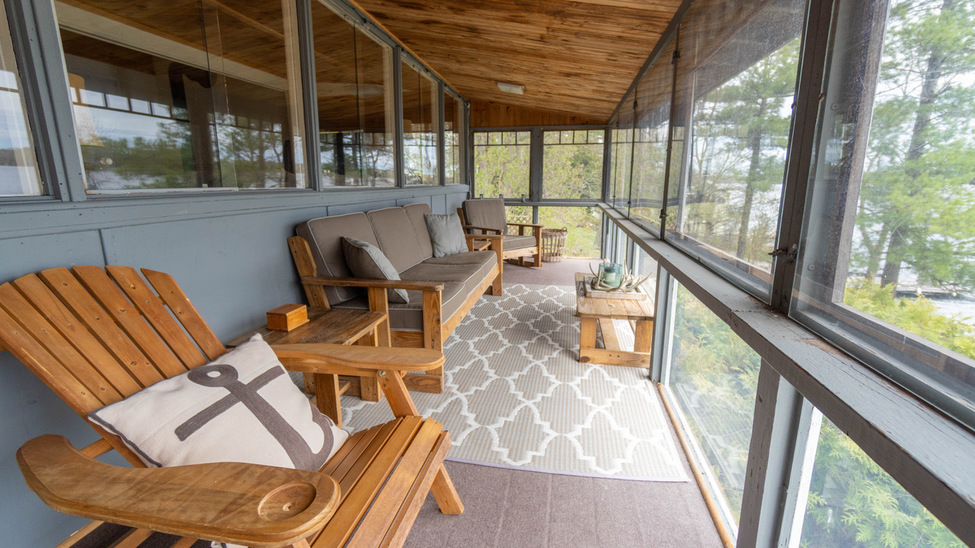 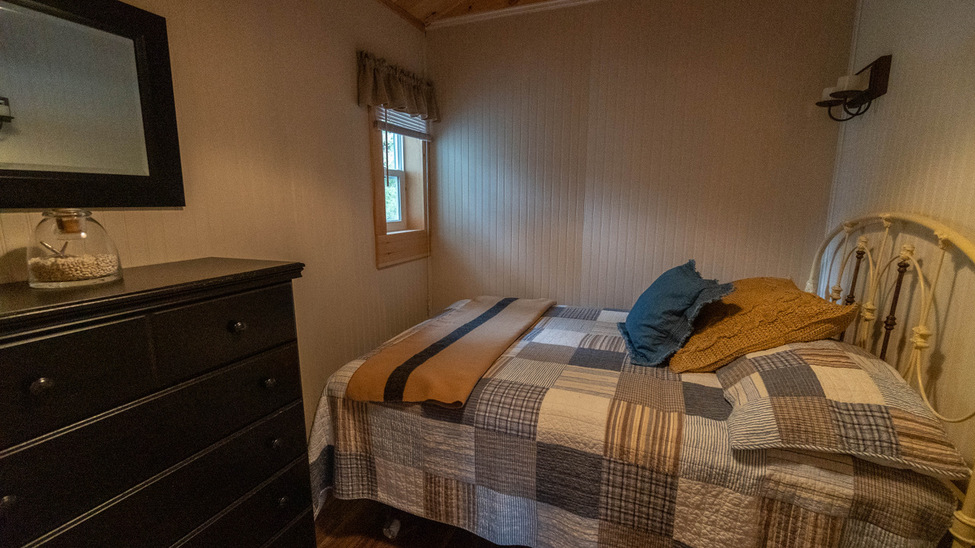 The bathroom has pine walls: 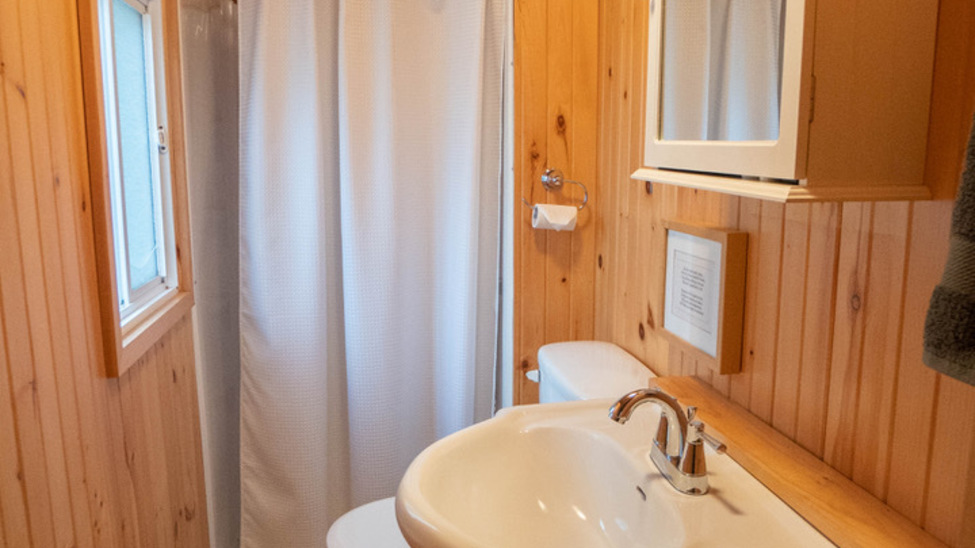 In 2012, an oak tree fell on the side of the cottage during a storm, forcing the seller to re-do some of the shingling and decking: 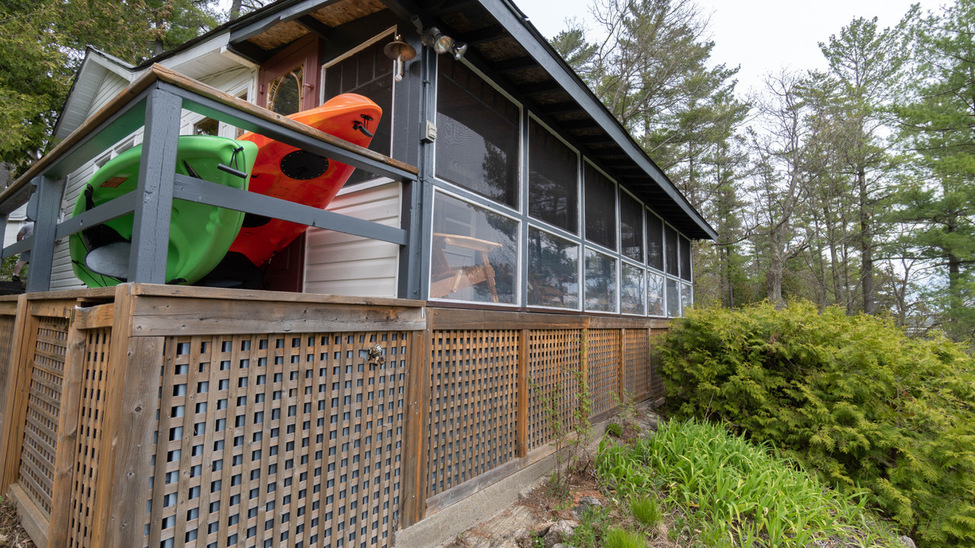 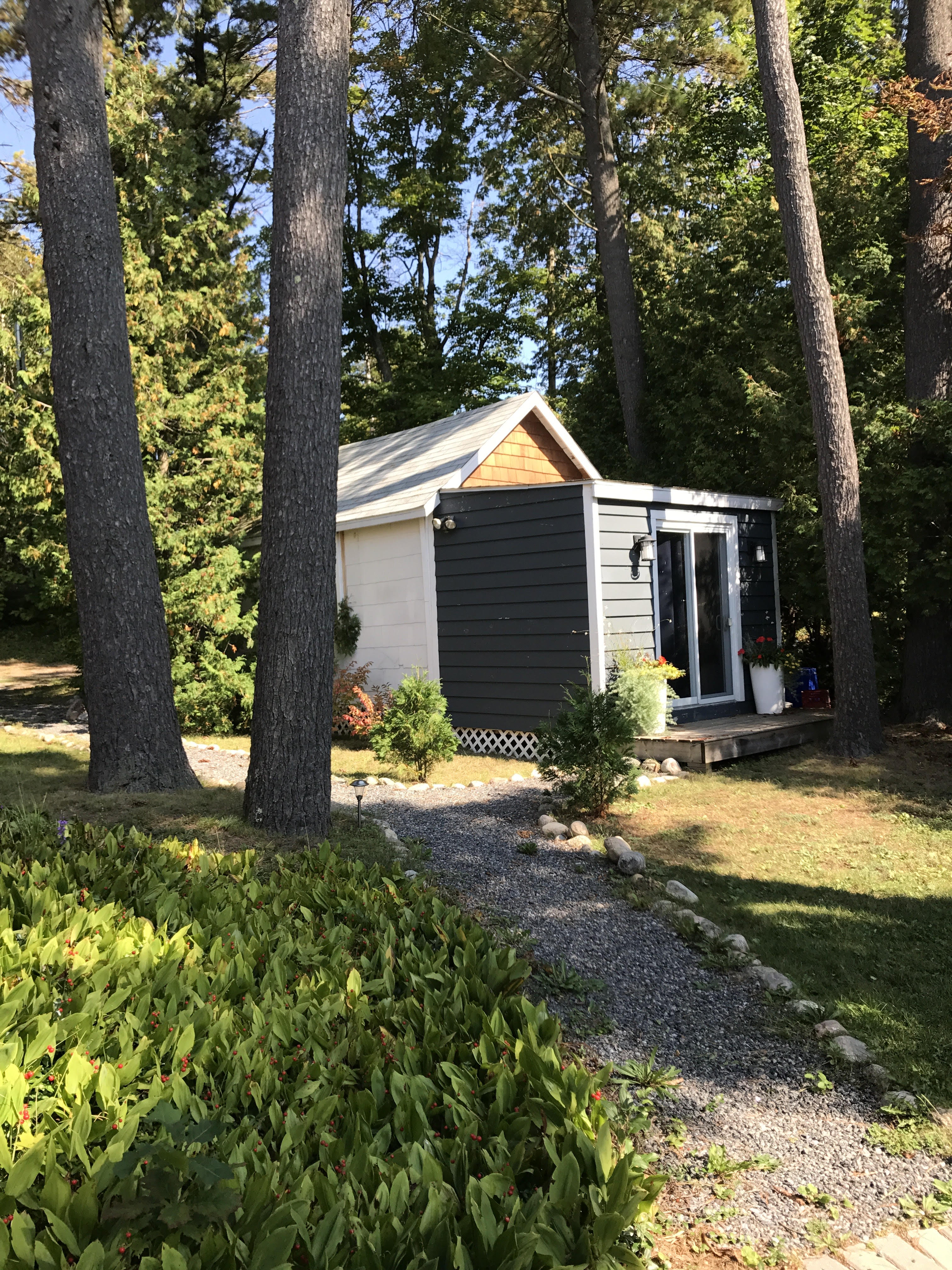 It has laminate flooring and white beadboard walls: 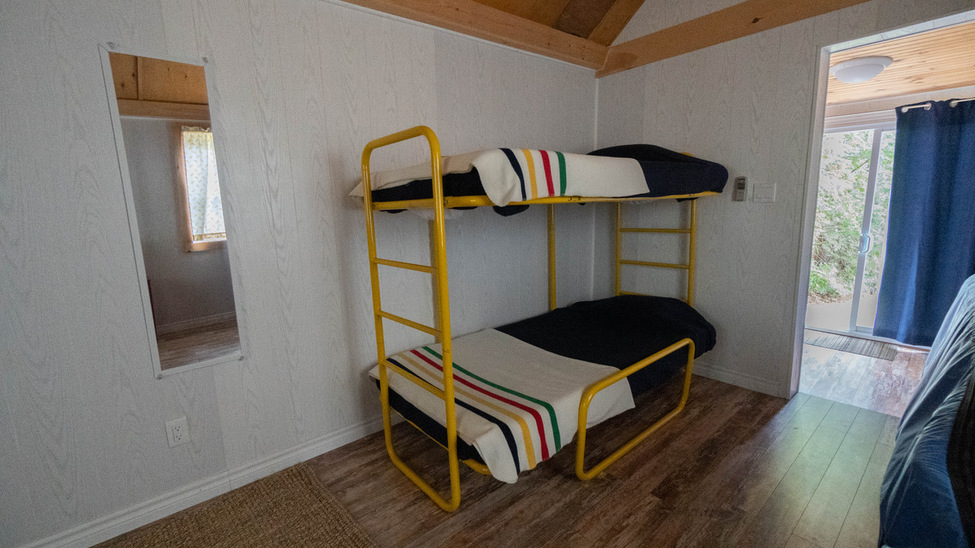 And enough space to sleep at least four people: 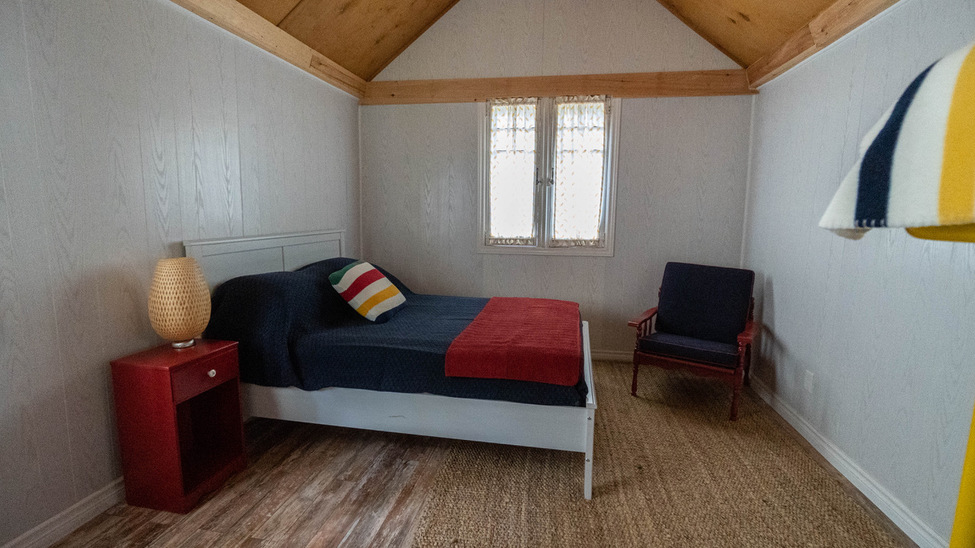 There’s a small fire pit area on the waterfront: 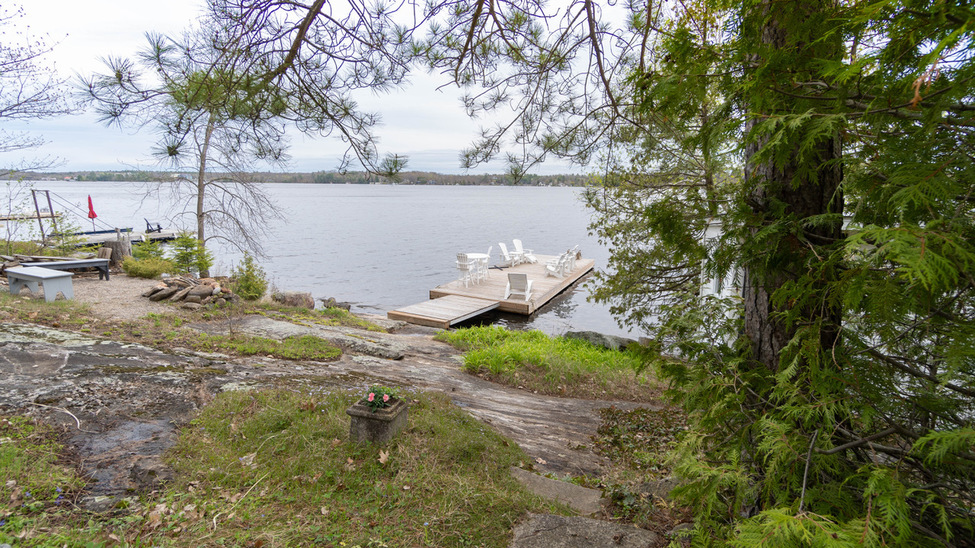