The Distillery District is getting a gorgeous brick condo with a co-working space, indoor pool and pet spa

The Distillery District is getting a gorgeous brick condo with a co-working space, indoor pool and pet spa

Over the past few years, The Distillery District has emerged as one of the most desirable neighbourhoods to live in Toronto—and not just for Torontonians looking to snap Instagrams in front of the famous Gooderams and Worts sign. The neighbourhood is almost surreally picturesque and has a historic story that tops nearly every other landmark in the city, but lately it’s become even more of a creative, cultural and technological hub for downtown residents. Lanterra’s latest project perfectly reflects the area’s unique, history-driven design sensibilities and provides modern, practical amenities tailored to downtown residents. And there’s good news for anyone who’s ever dreamed to live in the iconic neighbourhood: pre-construction sales have officially launched, and you can sign up to register now. 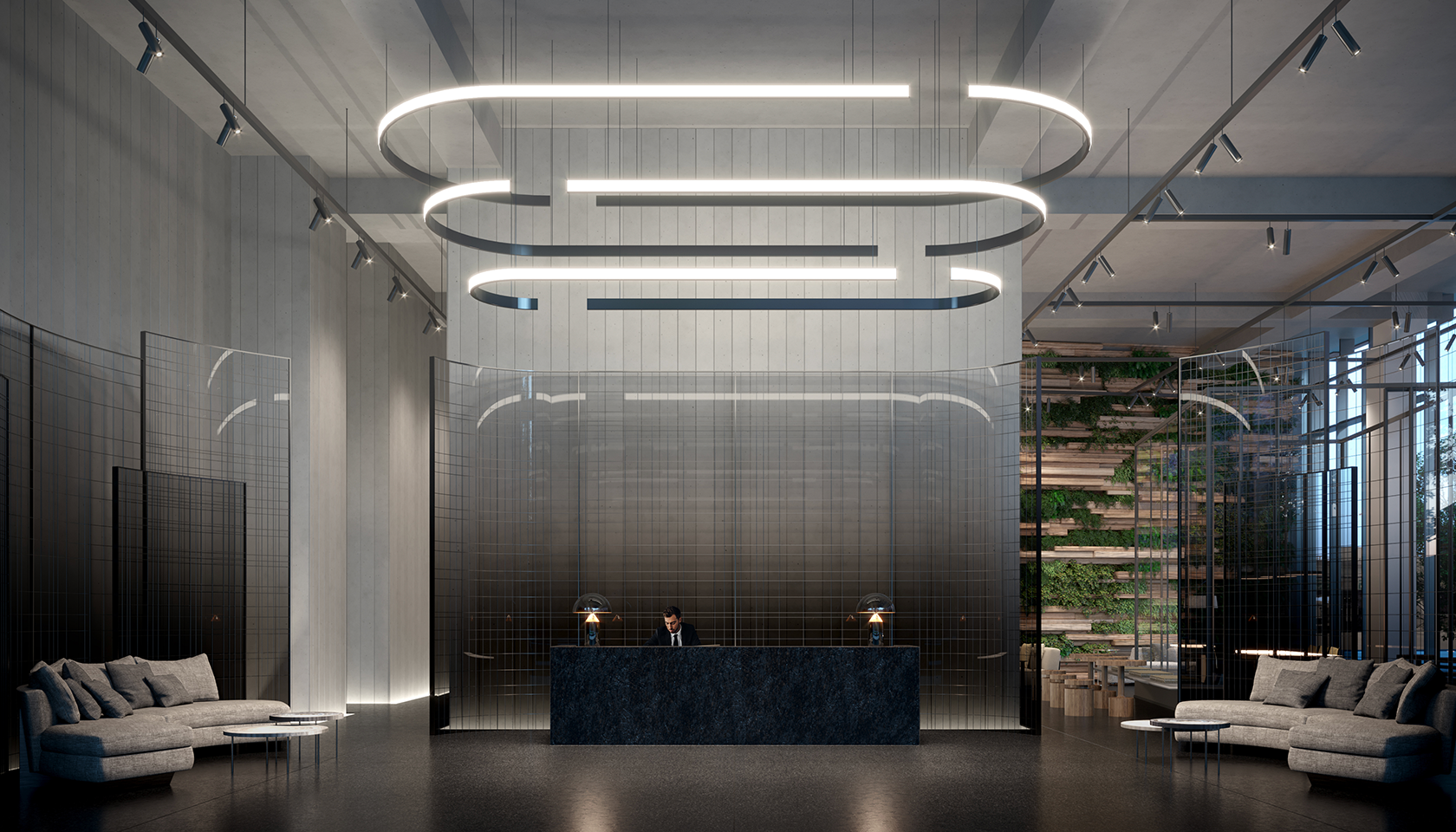 No. 31 Condos, which will be located at 31 Parliament Street, is a collaboration between a couple powerhouse, award-winning firms: Miami-based architect firm Arquitectonica, who’s behind innovative projects like the Bronx Museum of the Arts and Festival Walk in Hong Kong; and Studio Munge, the Toronto interiors firm behind residential and commercial projects including Byblos Uptown the William Vale Hotel in New York. Lanterra themselves are one of Toronto’s top developers, and are responsible for some of the city’s most coveted buildings and areas, including the Toy Factory Lofts, ICE Condos, One Bedford on Bloor and Maple Leaf Square. 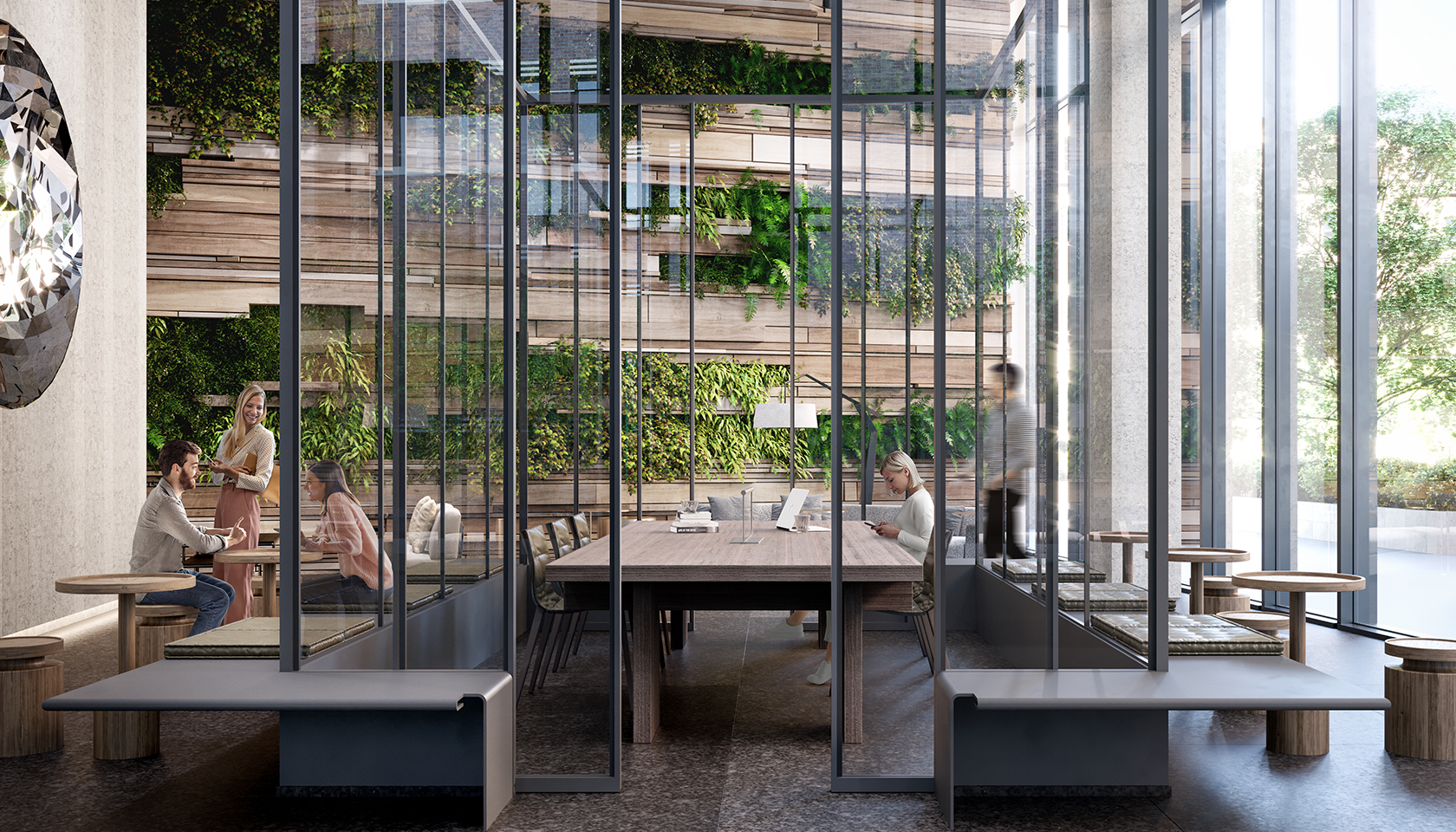 For this project, the aesthetic was inspired by the Distillery District’s distinct mix of elegant-yet-edgy features. Says Lanterra chairman Mark Mandelbaum, “Our vision was to create a community that has the beauty and grace of a European sidewalk, with a creative and dynamic essence you’d find walking the streets of Chelsea in New York City.” The 41-storey tower will consist of approximately 428 units, ranging in size from 350 to 1,079 square feet. The look is mix of old and new: the glass tower will be framed in a red brick façade, with green roofs and layered levels that make the building blend in seamlessly with the surrounding architecture and cobblestone streets. Inside, the contemporary lobby functions as much more than just an entrance—it’s designed to be a spacious live-work hub where residents can gather and collaborate with each other. Attached to the main floor lobby with retracting glass doors and lined with living walls, the co-working space is meant to spark creativity and a provide a sense of community among residents. 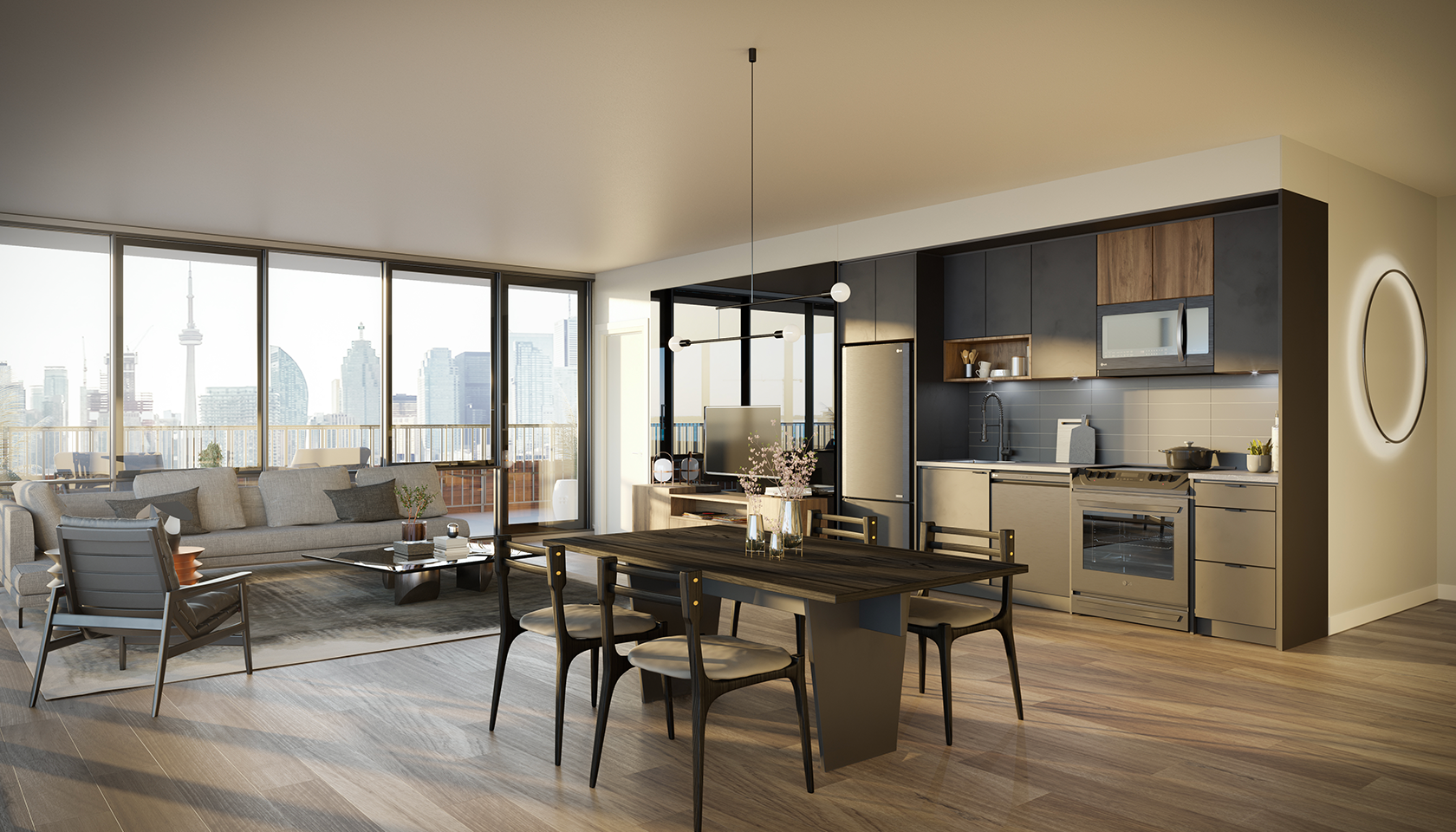 When it comes to the individual units, the goal was to make the spaces warm and natural. Says head designer Alessandro Munge, “We were inspired by the immediate design elements around us, and used a palate of dark earth tones mixed with organic textures that can showcase each owner’s individual style.” The thoughtfully designed suites merge contemporary touches with clean lines and matte finishes. Think: dark grey cabinetry, granite or quartz countertops, wide-planked laminate flooring and minimalist stainless-steel appliances. Many features, such as the colour of the floors and cabinetry, can be customized for each owner, and all units have floor-to-ceiling windows that maximize the views. 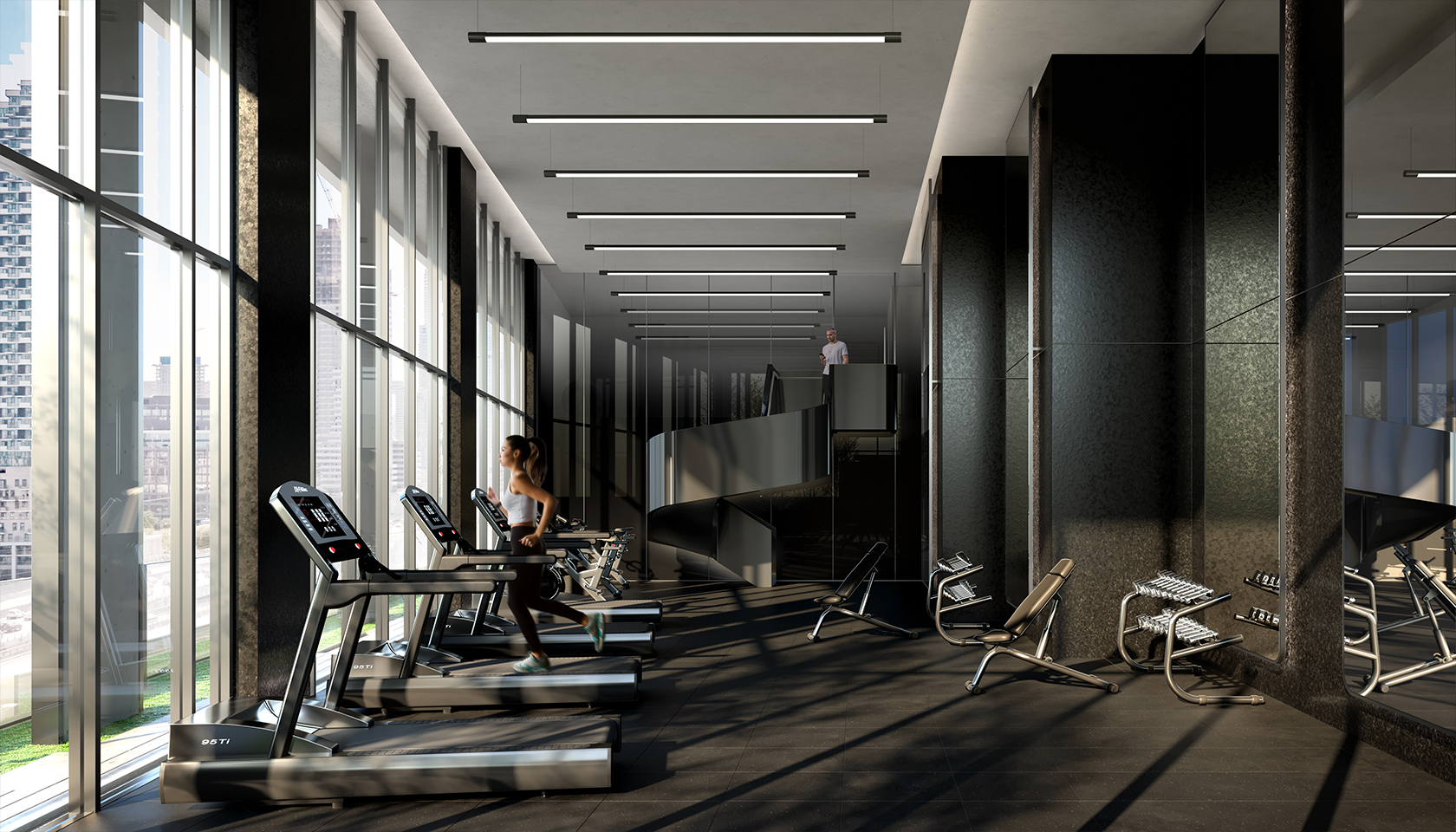 In addition to the main-floor live-work space, No. 31 Condos also comes with plenty of amenities that turn the building into your own private escape. The second floor has a landscaped outdoor terrace that’s attached to a stunning indoor pool and hot tub, with unisex dry saunas and—get this—a pet spa to satisfy any of your furry companion’s needs. The fifth floor is an entertainer’s dream, with a roof garden, BBQ stations and reflective pavilion with a sunken firepit. It’s attached to a private dining room, catering kitchen and party lounge that’s beautifully outfitted to host any type of shindig—whether it’s a personal holiday party or a company retreat. 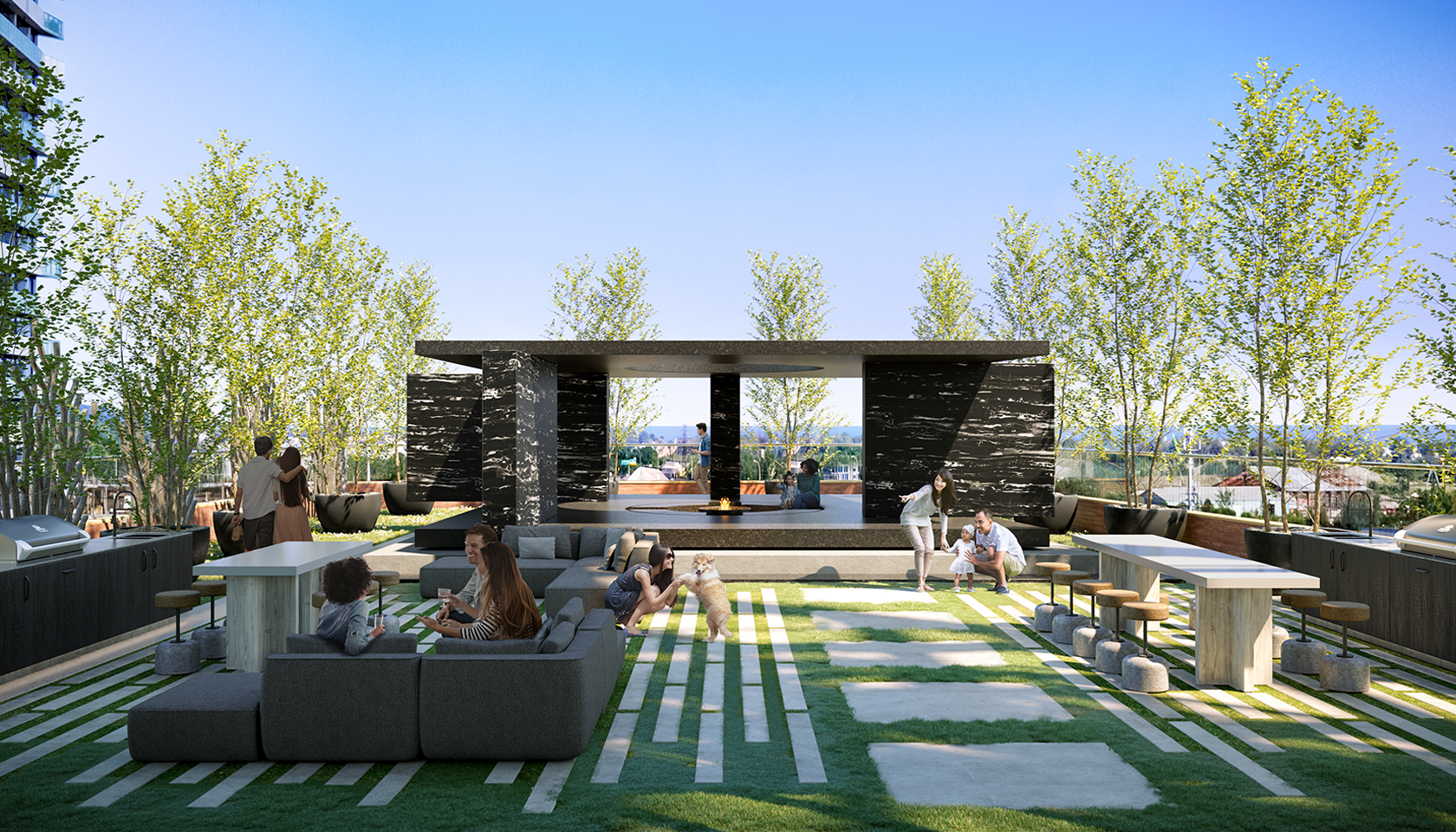 But as anyone craving a Distillery District lifestyle knows, the main perk is the area itself. Culture fiends will love being able to catch performances at Soul Pepper Theatre, the Young Centre for Performing Arts, Dancemakers Studio or Tapestry Opera. There are tons of independent galleries showcasing emerging artists, indie craft shops and designer furniture galleries to die for (The Guardian recently chose the neighbourhood as one of the world’s coolest shopping destinations). The neighbourhood is also home to a massive range of public art installations, and regularly hosts exhibits like the sparkling Toronto Light Festival in the winter. The dining scene is thriving, too, and having places like Cluny, El Catrin and Boku in your backyard is a major bonus. The waterfront and Sugar Beach are just a stone’s throw away, and if you ever need to get anywhere else in the city, instant access to the streetcar, Go Train and new SmartTrack makes public transport a breeze. 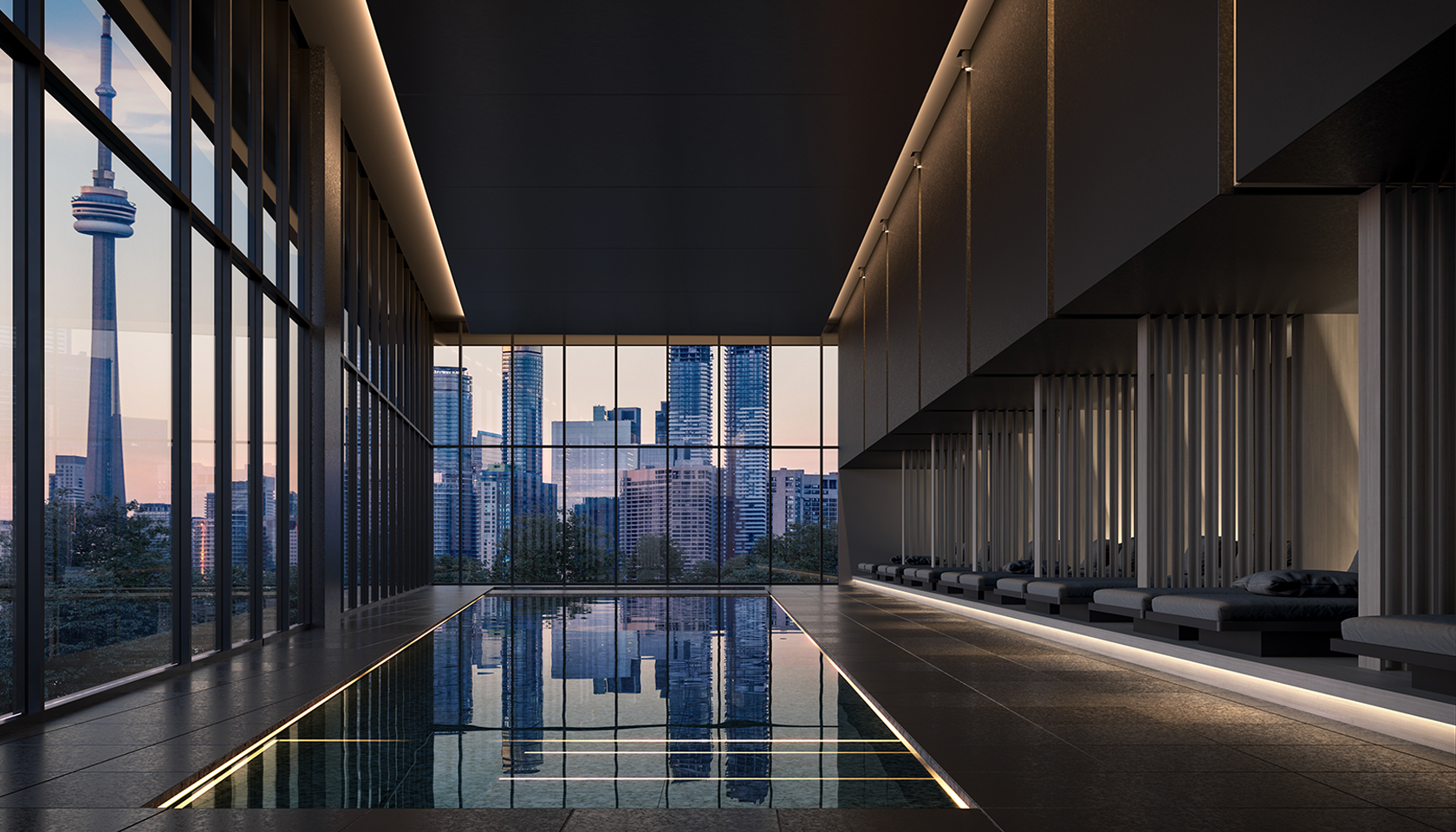 And what’s coming down the pipeline for the area is even more exciting. Sidewalk Labs, Google’s $38-million waterfront revitalization, will not only add a ton of tech jobs to the area, but also nearly 300 hectares of parks and public spaces. There’s also something called the Red Brick Promenade in the works. It’ll be a path and concourse leading from the Distillery District down to the water, ending at what will ultimately become the city’s third urban beach, Whisky Beach. East of the new condo, a neighbourhood called East Harbour will be popping up with 12 million square-feet of retail and office spaces, plus a Union Station subway relief line and access to the Go Train, Streetcar, SmartTrack and buses.

In a city with its fair share of cookie-cutter towers, this development is a one-of-a-kind offering that’s full of character and personality—in an area that’s about to become even more vibrant and full of life. To get more information about how to secure a spot in one of Toronto’s most unique condos, visit 31condominiums.com.