My husband and I were living happily as Annex renters. Then, in 2020, we got pregnant and needed a place to raise a family 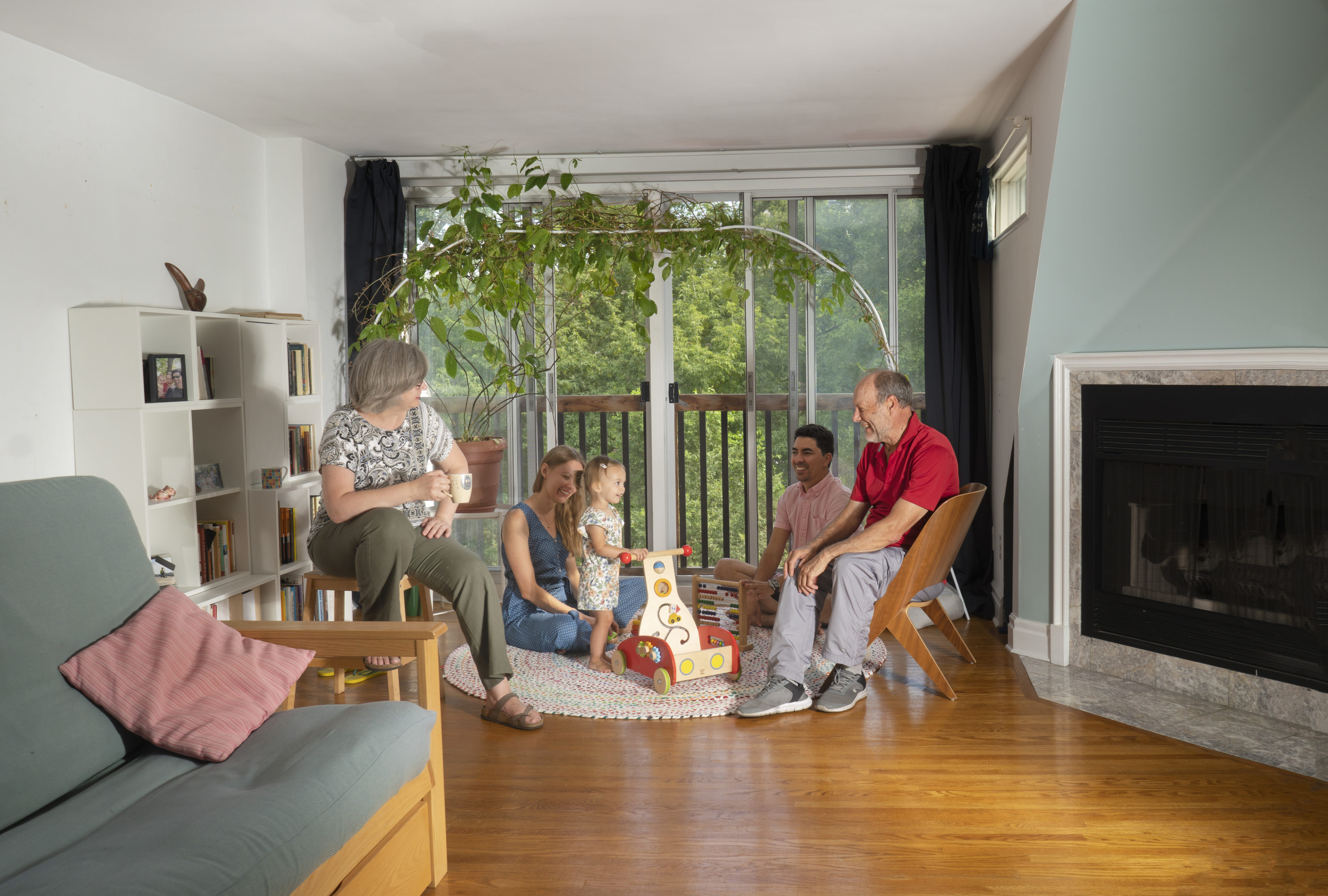 Who: Dina Drabinia, 33
What she does: Freelance architect
Where she was before: The Annex
Where she moved: High Park

My husband, Michel, an architect by training working in the construction industry, and I were living a happy life as renters. We had been residents of the Annex since 2017, calling the upstairs unit of a semi-detached house our home. We never needed a car, just our bikes and public transit. We loved how close Bathurst station was. We loved Bloor—eating at all the restaurants, like Country Style Hungarian, and shopping at all the retail spots.

Then, in 2020, we got pregnant. We needed a place for ourselves, yet we couldn’t afford the downtown market. If Michel and I were to buy a house outright, it would have had to be outside the city. But suburban life was not for us. What to do?

By 2021, our daughter, Maya, had been born, and I started thinking about teaming up with my parents, Julia and Alexey, to buy property. They were living in a two-bed, two-bath condo at Lawrence and Don Mills and wanted to be closer to Maya. If they were to sell the condo, we would have a $2-million budget for our new property. My dad, who is retired, had already been helping immensely with child care. However, my mom, a full-time IT specialist, barely got to see her granddaughter.

I’ll admit, I was initially worried about how Michel would react to the idea of living with his in-laws. But he was on board from the start. He wanted a new family home as much as I did. We had been saving for a down payment, but it was a losing battle: the skyrocketing price of the average Toronto home was outpacing us.

So the four of us set out on the hunt together. We all agreed that the would-be home needed to be close to transit and parks and have separate units. I sniffed around a bit for spots in the east end, but my parents love High Park. It had everything the five us needed, so we concentrated our efforts there, checking out duplexes specifically.

Our goal was to find a move-in-ready house to avoid having to set aside money for renovations. The first five or six properties we saw were decent, but they would have required a lot of work. The kind of home we wanted was rare, and we knew it. Still, we persisted.

Then, in March 2022, after about five months of searching, we came upon the listing: a $1.73-million, three-storey, semi-detached house with a finished basement in High Park north, close to the Junction. It was in good shape. It also came with a two-car garage, a leafy backyard linked to the basement at grade, and two 1,200-square-foot units that each had their own kitchen and outdoor area. And there was a bonus: landing the house for less than our $2-million limit would allow my parents to keep the condo in Don Mills as an investment property.

We submitted an offer on March 10 for $1.62 million. The sellers countered with $1.69 million. And, on March 11, we shook hands on a $1.65-million deal. We were thrilled. Michel and I split the cost with my parents 50-50, including the mortgage and maintenance going forward. Plus, my folks got to keep their condo.

My parents’ unit (the basement and ground floor) has two bedrooms, two offices, one full bathroom and one powder room. Mom set up her work-from-home office in the basement, which means that, even when she’s working, she’s always close to Maya—playing with her in the backyard on breaks, sharing her lunch.

The change in lifestyle was, at first, a hurdle for my parents. In Don Mills, they liked being close to the mall and driving around. But, now that they’ve settled into High Park, they can’t stop talking about how nice it is to walk to the subway or to the grocery store or to the park with their granddaughter.

As for the upstairs unit, there’s a kitchen, a dining room, a bedroom and a bathroom on the second floor, and another bedroom and living room on the third. Design-wise, we haven’t changed anything. Previously owner-occupied, the unit comes with treated-pine wood counters and cabinets, which gives it a rustic look that we like. Our kitchen walks out onto a second-storey deck—very important since Michel and I don’t have direct access to the backyard.

So far, moving in with my parents has been both fun and challenging. Making decisions as a group hasn’t always been easy. We have disagreements, mostly about the shared spaces: how to organize the garage for storage, landscaping, that kind of thing. Sometimes the debates drag on, and we’re trying to be democratic about it. Since it’s hard to sync our schedules, we generally settle debates via group chat, but I’m looking for a more effective system. Overall, though, these squabbles have been small. When I think about the big picture, I know that I’m so lucky to own this house, to be in a great neighbourhood and to have my parents help take care of Maya. We’ve landed her a spot at a neighbourhood co-op nursery for Tuesday and Thursday mornings.

This whole experience has made me think a lot about real estate in Toronto. I’ve been concerned with the struggles of young families trying to find housing in the city. It’s a huge problem. Most people can’t dream of owning a home unless they’re wealthy or they receive help from their parents, like we did. Torontonians are getting pushed farther and farther outside the city, and we’re fortunate to have found a way to stay.

—As told to Roxy Kirshenbaum

Did you recently break into Toronto’s housing market? Share your story with us at realestate@torontolife.com.