The federal government recently denied the Blue Jays’ request to play home games at the Rogers Centre during the shortened MLB season, citing the dangers of having planeloads of ball players crossing the border during the pandemic. But even if the Jays had been allowed to nest in Toronto this summer, fans would have been forbidden from watching in person, given that a stadium filled with screaming spectators would create a social-distancing nightmare. The scenario presents a bit of a problem for 82-year-old Joyce Zweig, who has attended every home opener since the Jays franchise first fluttered its wings at Exhibition Stadium back in 1977. When the Jays play their first “home” game this year in Washington, D.C., Zweig won’t be in the stands. But she says that doesn’t necessarily mean her streak is over.

Can you tell me how your streak got started?
I’ve liked baseball ever since I was a kid. I used to go down to watch the Toronto Maple Leafs, our old minor-league baseball team, at Maple Leaf Stadium on Bathurst Street. I had a teacher who taught us the rules, and it was the only sport I understood. Even though I didn’t get the nuances, I knew there were three strikes, four balls and you wanted to score. That was all I needed at that time. Back then, in the 1940s, we were allowed to take the afternoon off—they were all afternoon games at that point—if we brought a note from our parents. A bunch of us would take the streetcar down to Front and Bathurst. After the game, we would walk home—because the streetcars were so crowded—and talk about the players we liked. So, years later, when I heard there was finally going to be a major-league baseball team in Toronto, I said to my husband, Stephen, “Okay, let’s get Blue Jays season tickets.” That’s when we started.

Tell me about your first-ever Blue Jays home opener.
It was so wonderful. It was 1977, and the Jays were playing the Chicago White Sox at Exhibition Stadium. There was snow on the ground, so they had to postpone the game for a while. One of the White Sox players put the catcher’s shin pads on his feet as skis and used bats as ski poles. Then he walked around, like he was cross-country skiing.

That kick-started a run of 42 straight opening days. Did you ever think it would be a virus that stopped it?
No, I never thought of that. I was hoping I would go until I was at least 90. That will be the Blue Jays’ 50th anniversary. My youngest son, Jonathan, said that when I turned 90, he was going to speak to the organization about having me throw the ceremonial first pitch, assuming I could even throw a ball by then.

Are you a righty or a lefty?
A righty.

What pitch would you throw?
Whatever comes out of my arm.

So, a fastball?
Sure, right. You better believe it.

Which Blue Jay, past or present, would you want on the receiving end of that opening pitch?
Ernie Whitt. I liked him in the old days. Back then, I watched more and went to a lot more games. He just stood out as a really good catcher. I also met him a few times. I thought he was a really nice guy.

The Jays are homeless right now, having been booted from Toronto and more recently Pittsburgh. Now they’re going to play in Buffalo. What do you think of that?
When I told my son they might play in Pittsburgh, he said to me, “Even if they were playing on the moon, I would still be watching.” That’s the way I feel. I originally thought they would play in Buffalo because it’s close by, it’s the home of our minor league affiliate. That’s fine by me.

Do you think the federal government made the right call banning home games in Toronto?
I’m pleased they aren’t playing in Toronto. I don’t think that ever should have been a choice. I think we do not want what’s going on below the border to come here. I never wanted it to be in Toronto. Not that anybody could go, anyway. It’s very sad that the whole thing is going to happen with no people watching.

When you first found out that people might not be able to attend games in person, what was your reaction?
My son Jonathan didn’t want our opening day streak to end, so if the Jays had been playing their home opener in Toronto, he thought about getting a room overlooking the field at the Marriott Hotel that connects to the Rogers Centre. We would have been a good distance from the game but still technically there. Those field-view rooms for a night game cost about $1,000—a lot more than our regular $85 tickets. We’ve got four of them a few rows behind the visitors’ dugout. 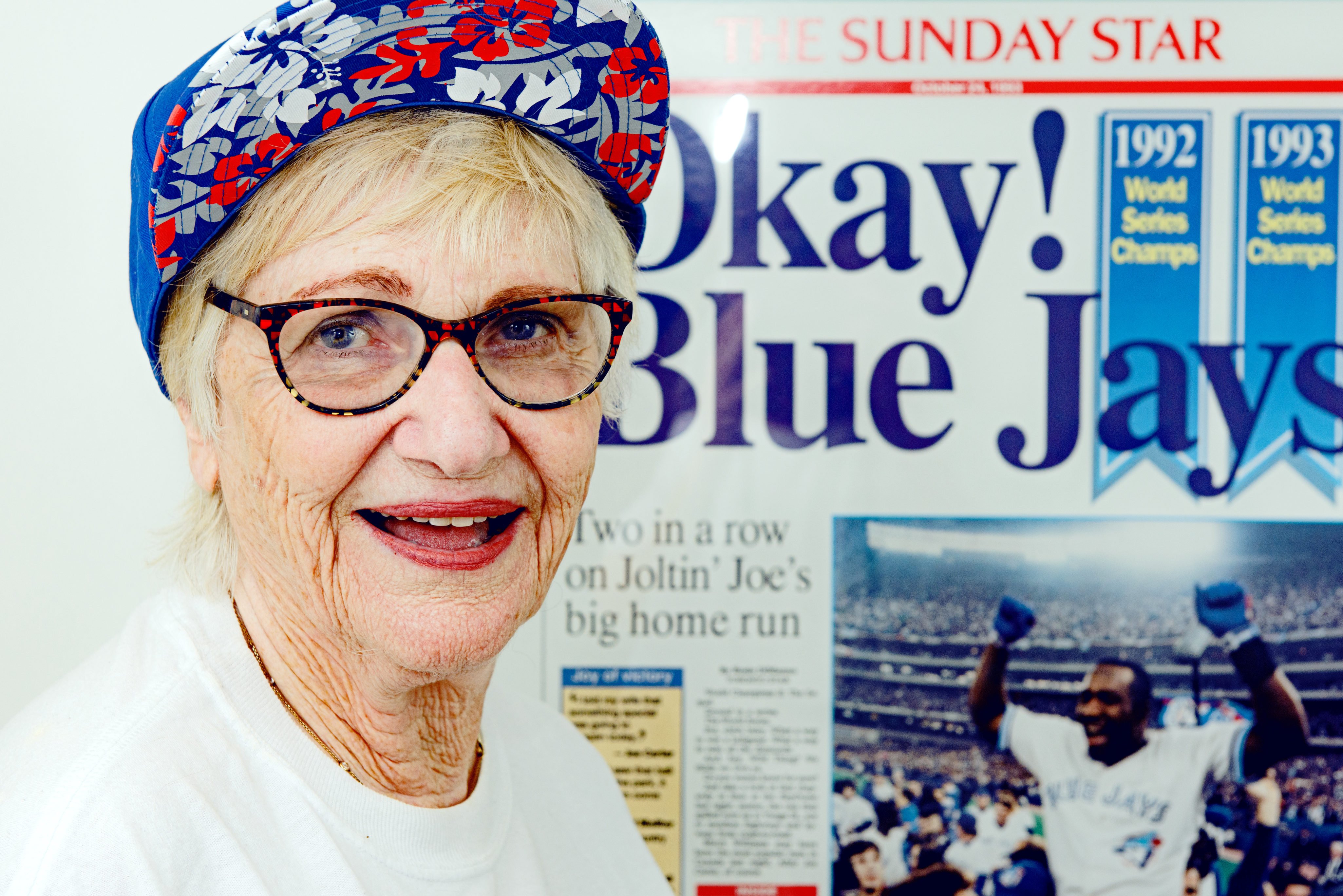 What’s your favourite part of opening day?
I think I always liked baseball because it was the start of summer, because I knew good things were coming. Football, which I never really liked, was basically the start of winter. Hockey was the middle of winter. Whenever I went to an opening game, I would sit there and say, “Ah, summer is starting.” It just felt so good.

Do you have any pre-game rituals?
I always wear a sweatshirt that my kids gave me. They gave it to Stephen just before his 59th birthday, in 1997, but he died shortly after that. So they wanted me to have it. And I’ve been wearing it to every single Blue Jays opener since then. My sons say I’ll be too warm in it, because I’ll be wearing it in July instead of late April, when the home opener usually happens. But it’s tradition. We also go for a pre-game meal with my sons and their kids.

When you go to a game, what sort of snacks do you get? Are you the type who gets popcorn, do you like those $12 beers?
I enjoy popcorn and shelled peanuts. I like sitting and cracking the peanuts open and having all those shells underneath my feet. I used to buy peanuts in the grocery store because they were far too expensive at the stadium.

And you’d smuggle them in?
Well, at the beginning, you had to smuggle. I would just put them in my purse. More recently, they started letting people bring food into the stadium. So I didn’t have to smuggle anymore.

Who’s your favourite person to attend a game with?
My three sons.

Yeah but which one?
How can I pick one?

The Jays play their first game of the season tonight against the Tampa Bay Rays. Where do you plan to watch it?
My neighbours, Rhoda and Barry Kirshin, are coming over to my condo in North York to watch. I’m going to barbecue some hot dogs and Rhoda is bringing popcorn. I’ve also got a group on WhatsApp with my three sons. I’m sure we’ll be chit-chatting during the game, talking about things as they happen. And I’ll just sit and watch it and I’ll just say, “Okay, this is it. What can you do?” This too shall pass.

Is there anything you’re secretly relieved to not have to put up with on Opening Day at the stadium? Gridlocked traffic, impossible parking, crazy crowds, obnoxious fans?
Absolutely not. The traffic is awful, but Jonathan picks me up, so I don’t have to worry about driving.

Who’s your favourite young Blue Jay?
I think Bo Bichette. He’s so cute. He’s not even that tall. I really like him. What can I say? I like the way he stands at the plate. I was so glad when he got called up last year. Now he’s going to be starting. I hope he lives up to all the hype. I really would like that.

Who’s your favourite Blue Jay of all time?
Roberto Alomar and Roy Halladay. I remember watching Robbie Alomar when the Blue Jays were winning, just about every game that year, when they won the World Series in 1993. If they were losing and Alomar came up, I would just say, “Okay, we’re gonna get it back now.” And nine out of 10 times, we did. He was just so good. And Halladay was unbelievable. But you know what’s so sad? That he was really so sick. He couldn’t pitch without taking all kinds of pills. That’s very sad, but he was very good and I really liked him.

The new Covid protocols will put a stop to spitting, elaborate handshakes and those face-to-face yelling matches when the manager runs out to complain to the umpire. Which of those things will you miss the most?
Probably the manager going out and yelling at the umpire. I like that. That’s exciting.

The Jays will play a 60-game season. If they do end up winning the championship, a lot of people might put an asterisk beside it, because it wasn’t a traditional 162-game schedule. What do you think of that?
I think there’ll be an asterisk whatever happens. I do hope they win. It would be very nice if they did. I think there will be an asterisk beside my “attending every single opening game streak,” because I would have been there if possible. But, you know what? That’s the way it is. Play it and don’t complain.

Correction: An early version of this article stated the Jays would play their first home game of the season in Buffalo, N.Y. That has since been updated.