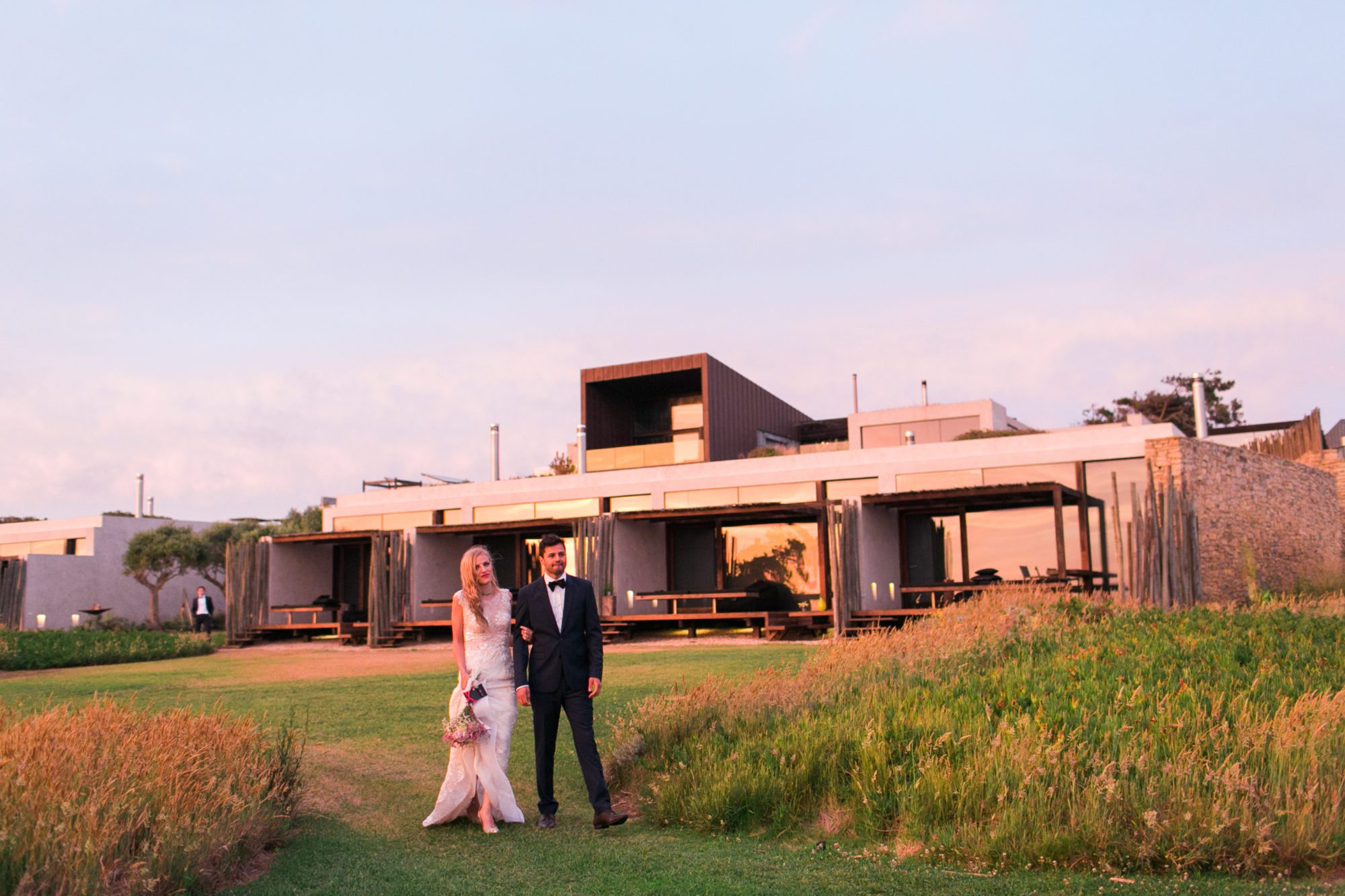 After dating for over eight years, salespeople and avid cyclists Ashley Ebner and Ativ Ajmera got engaged on an epic ride from their Yonge and Eglinton home to Port Credit, Ontario. When Ajmera pulled over to a particularly picturesque piece of roadside, Ebner was initially miffed that he had been pedalling so far ahead of her the entire time (he was distracted by the day’s plans, and intent on setting the scene), and thought that the flowers on the ground must have been for some sort of memorial. She finally clued in to what was going on when she spotted a bottle of champagne, and Ajmera got down on one knee.

They decided to get married in Portugal purely for the adventure. They’d never been, and neither had most of their friends. “We really just wanted to escape Toronto and give our families an amazing vacation together,” says Ajmera. Finding an appropriate venue in a foreign country, however, was a bit challenging—especially since they craved an experience above and beyond the typical banquet hall celebration. They researched everything from massive resorts to abandoned castles, and eventually landed on a funky five-star hotel right on the coast, called Areias Do Seixo. “It had this wow factor, kind of a James Bond vibe,” describes Ajmera.

The couple pored over photos and details from previous weddings held at the hotel, making note of what they liked and what they didn’t. In the end, they held a whimsical ceremony on the beach’s sand dunes, sat down for dinner in the hotel’s lush greenhouse (“It was an explosion of colour,” says Ebner) and continued with fireside cocktails and dancing until sunrise.

The wedding guests took over the entire hotel. Everyone was obsessed with the eco-conscious space, which is hyper-modern, solar-powered and blends in with its surroundings: 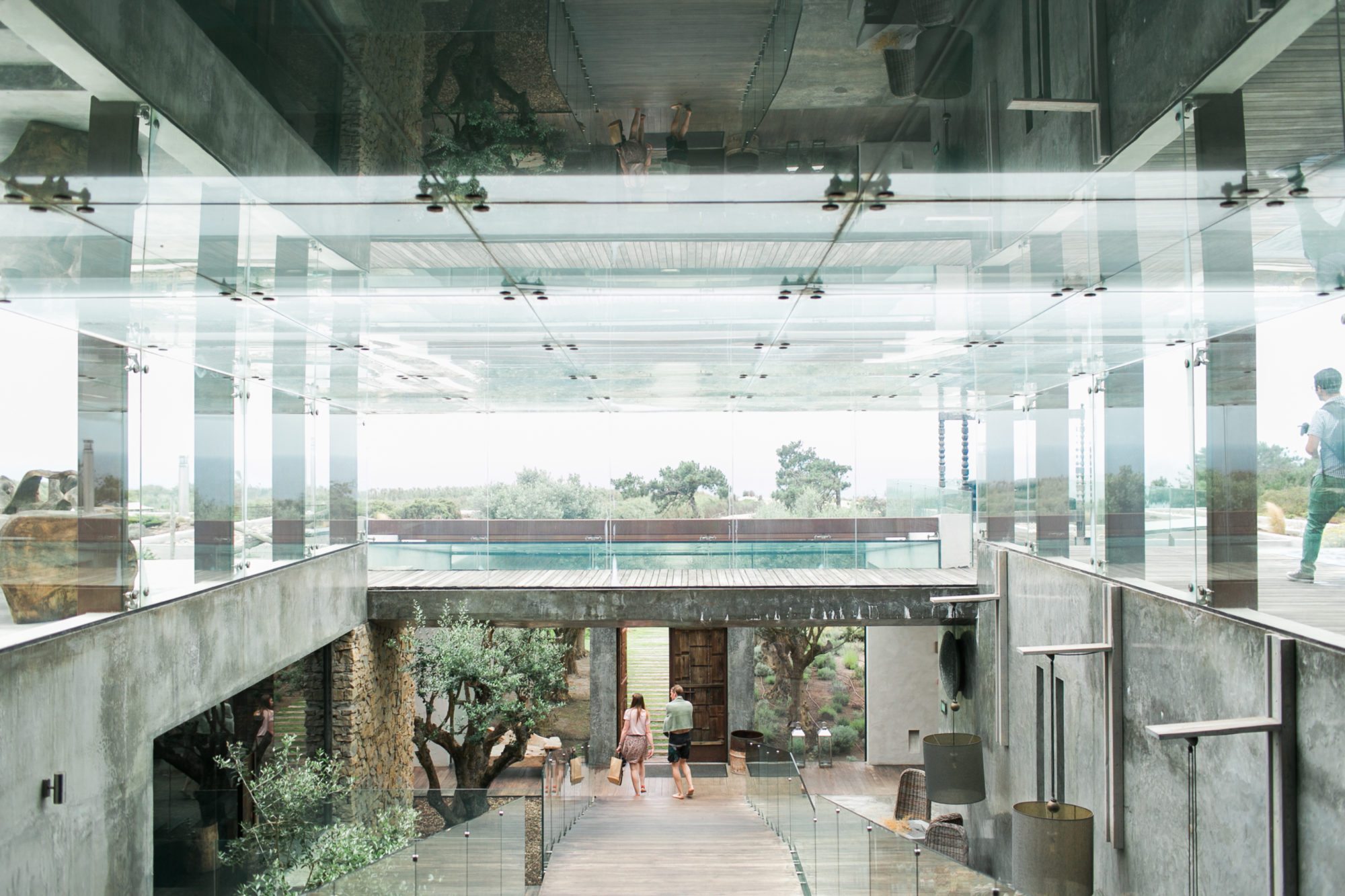 Guests prepared for the day by relaxing in the geothermal pool: 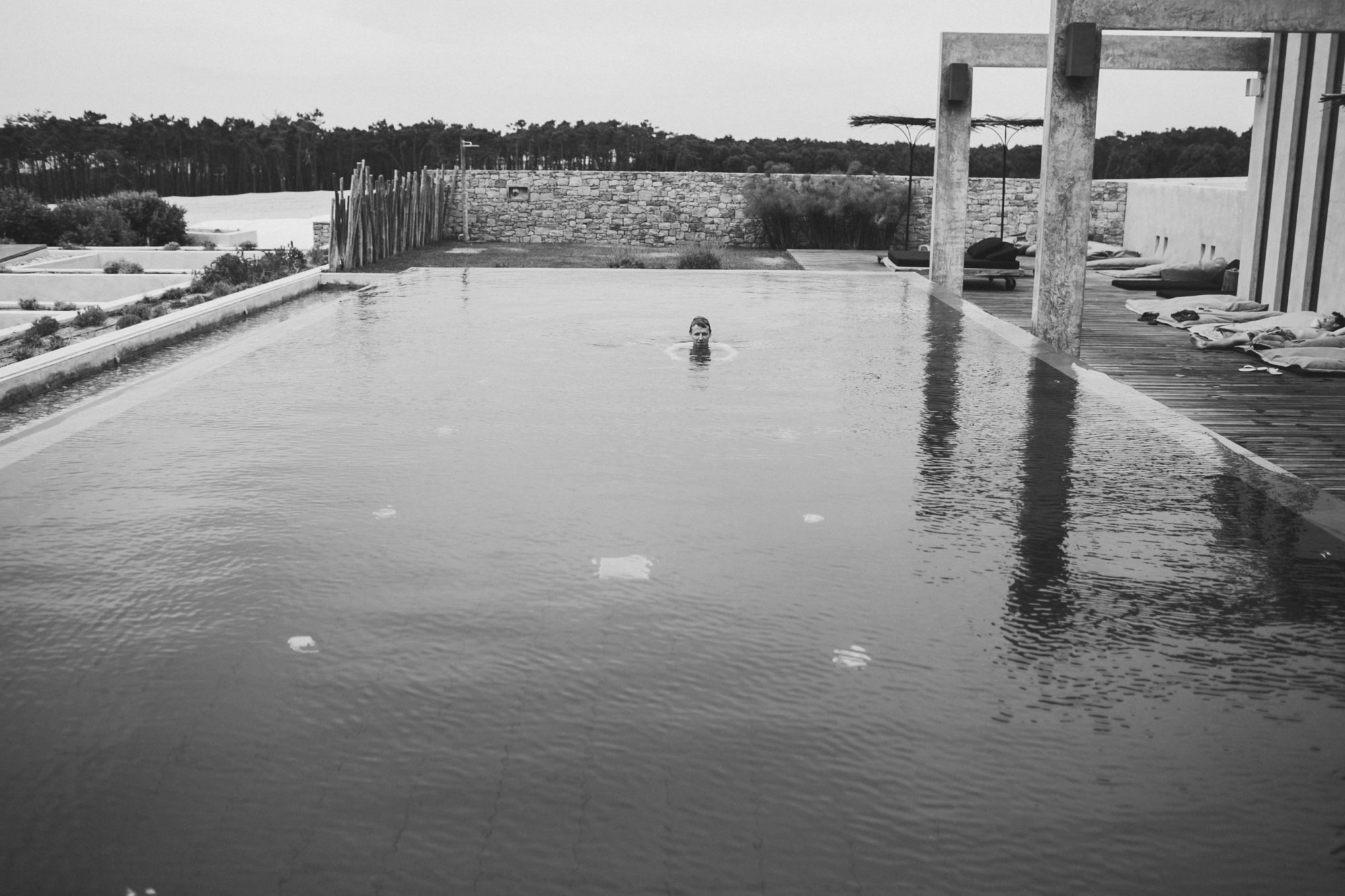 Ebner and her bridesmaids got ready in one of the hotel’s “love rooms”: 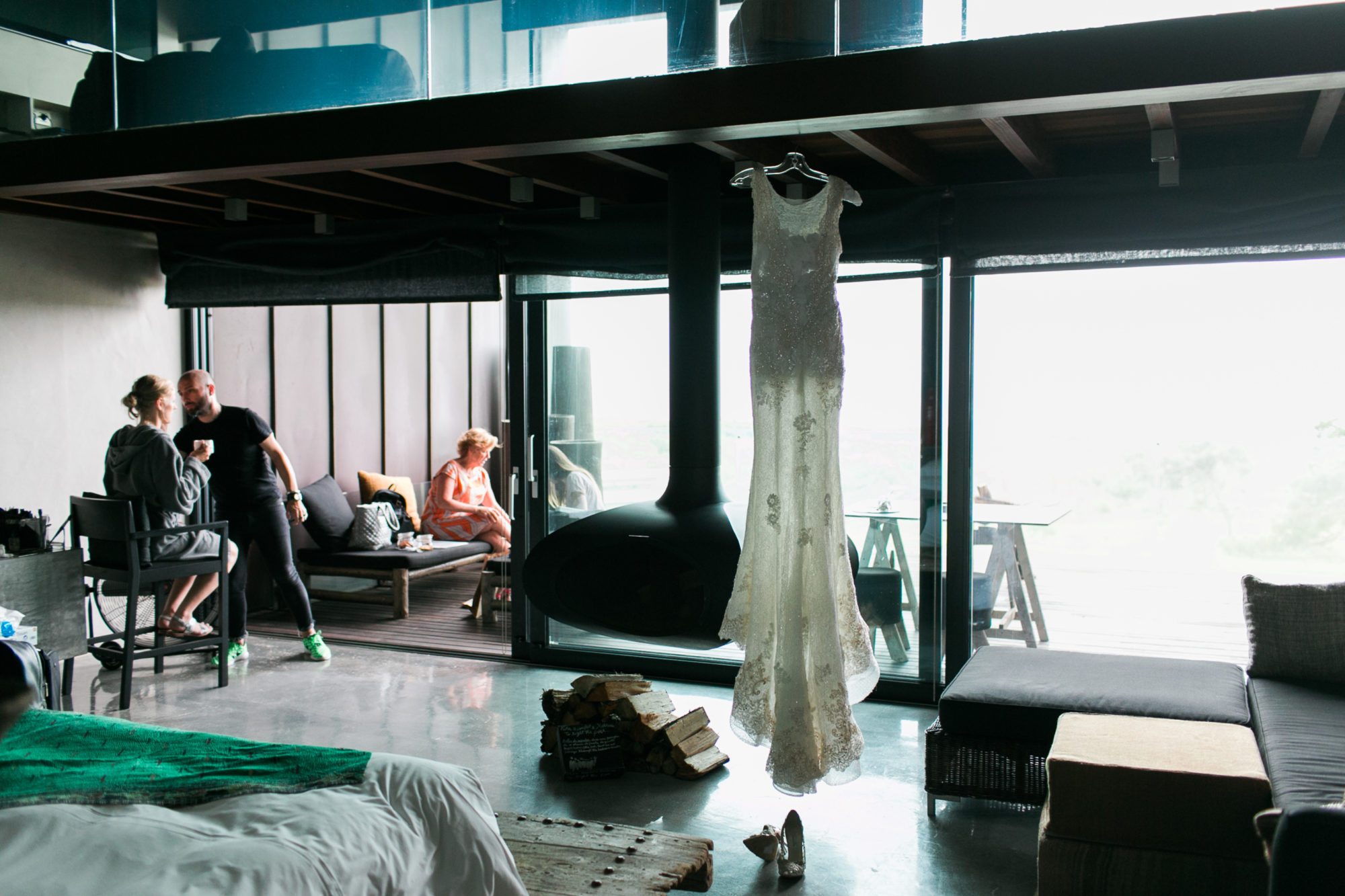 Bikes were adorned with bouquets of flowers, and were available for guests to ride into town or along the coast: 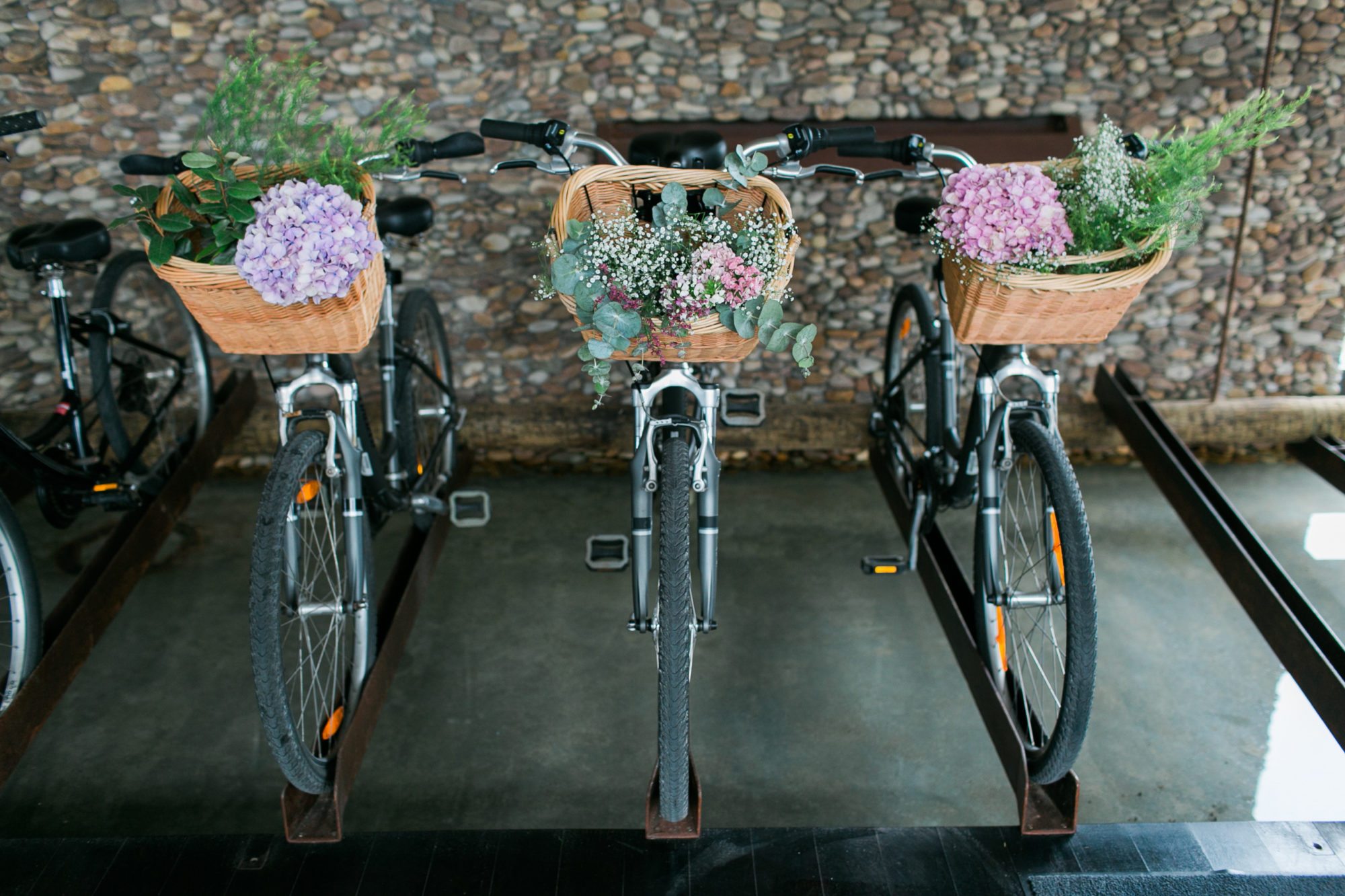 Ebner gifted her bridesmaids mink Vizali slides, so their heels wouldn’t get stuck in the sand during the ceremony (she wore a pair of Jimmy Choo flats): 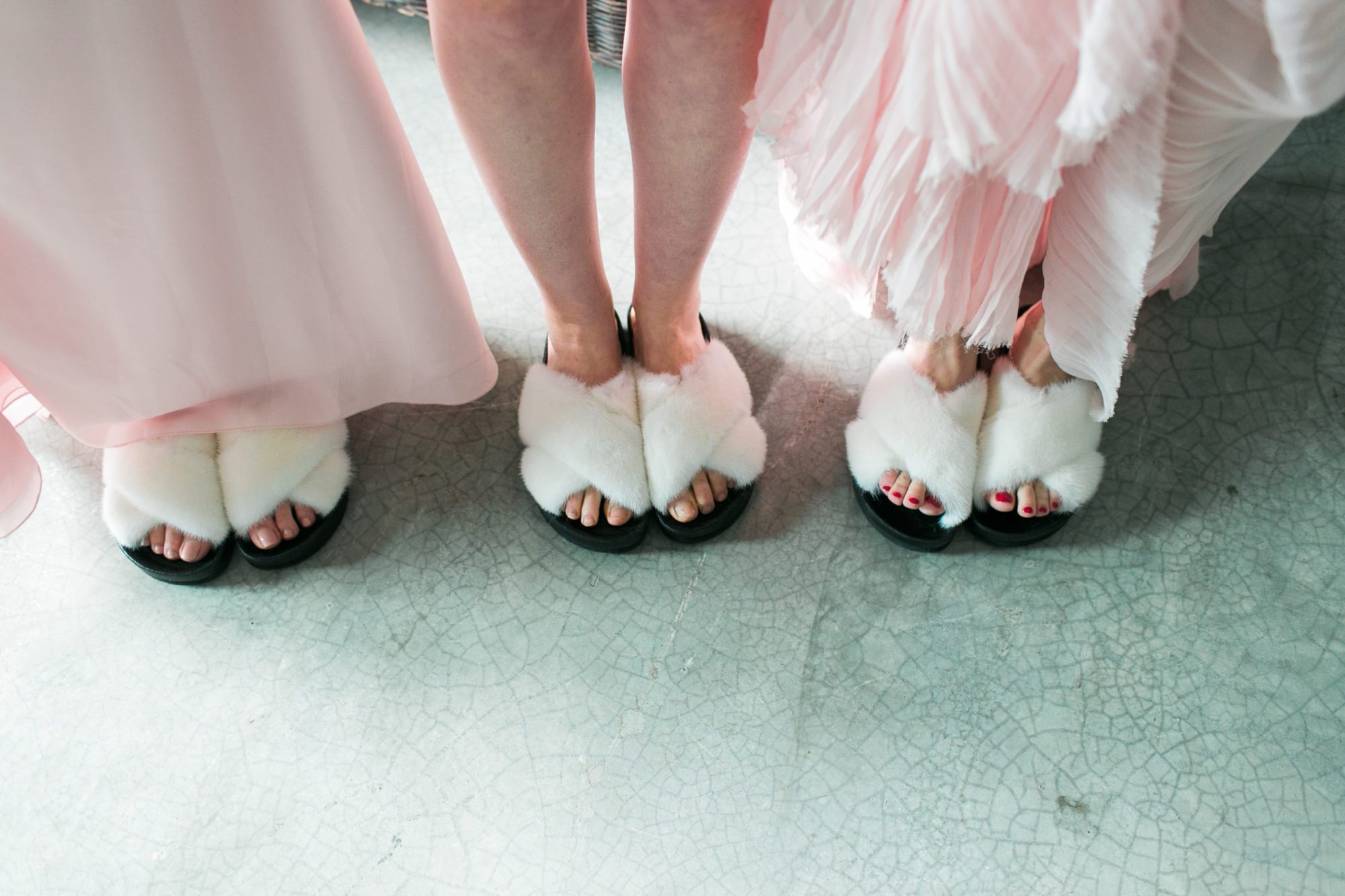 Ajmera and his groomsmen got ready separately, in one of the hotel’s villas: 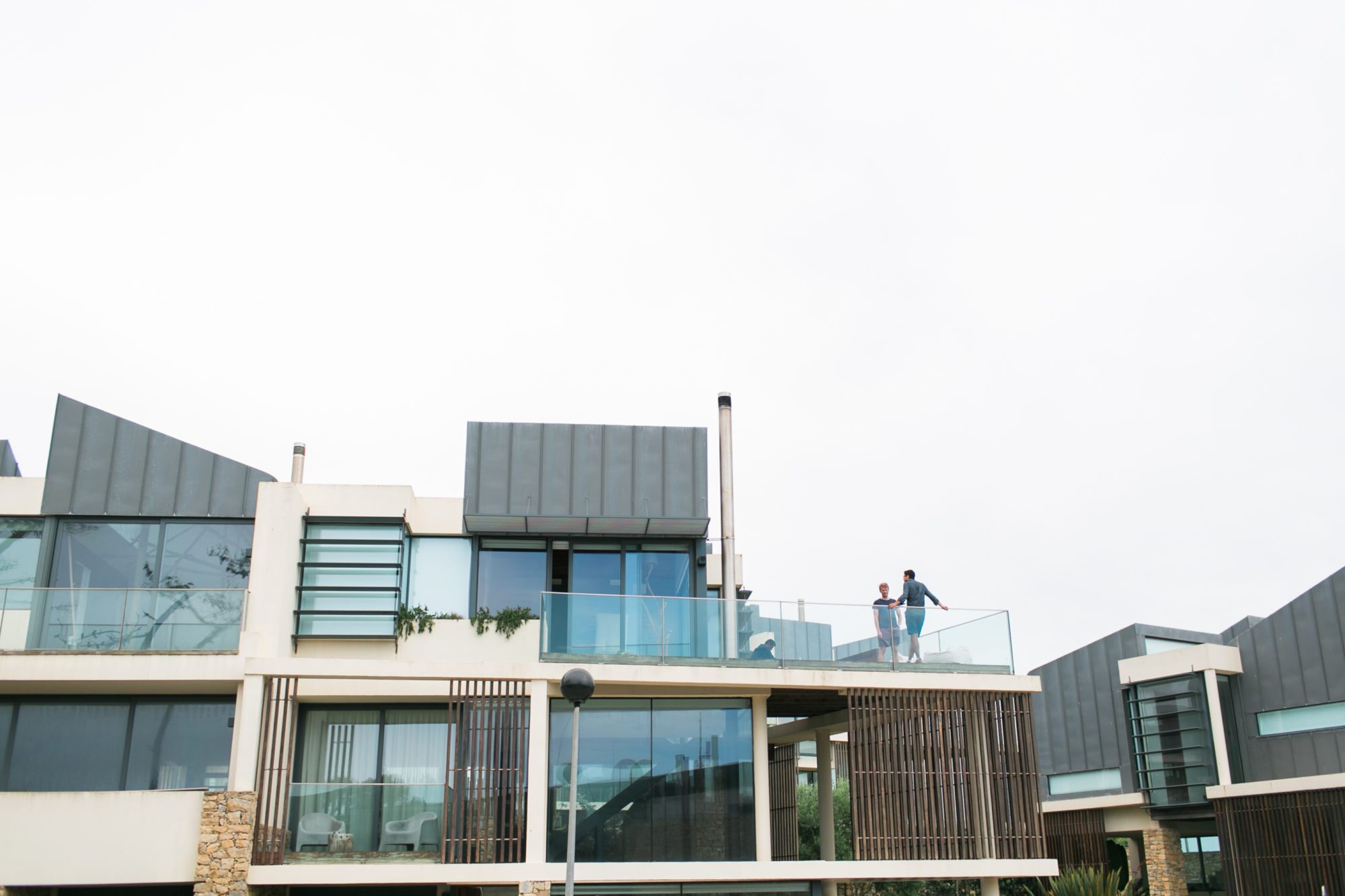 Ebner chose a dress from Toronto-based designer Ines Di Santo. She loved the delicate lace top and fairy tale–esque skirt and train, which could be removed for dancing: 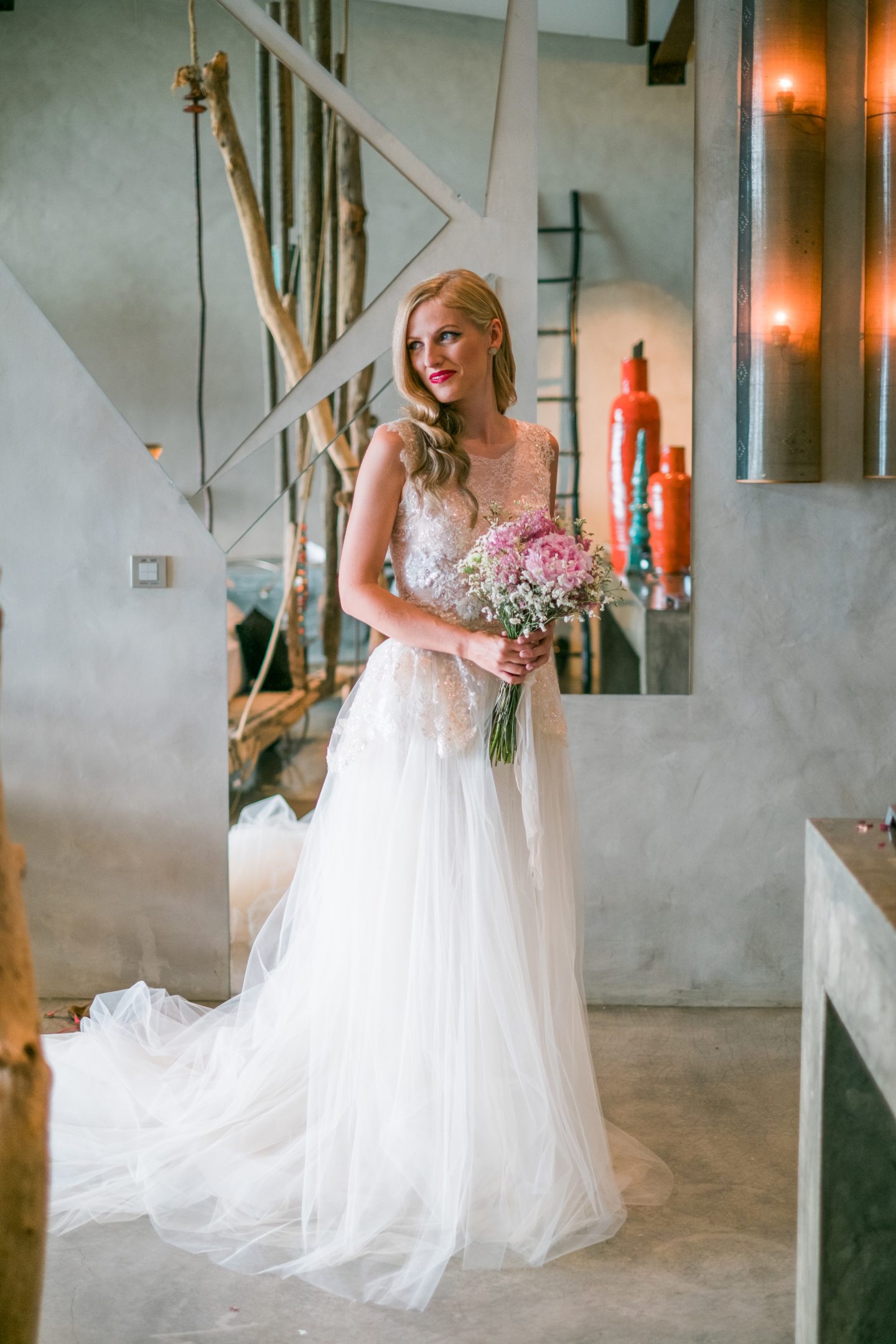 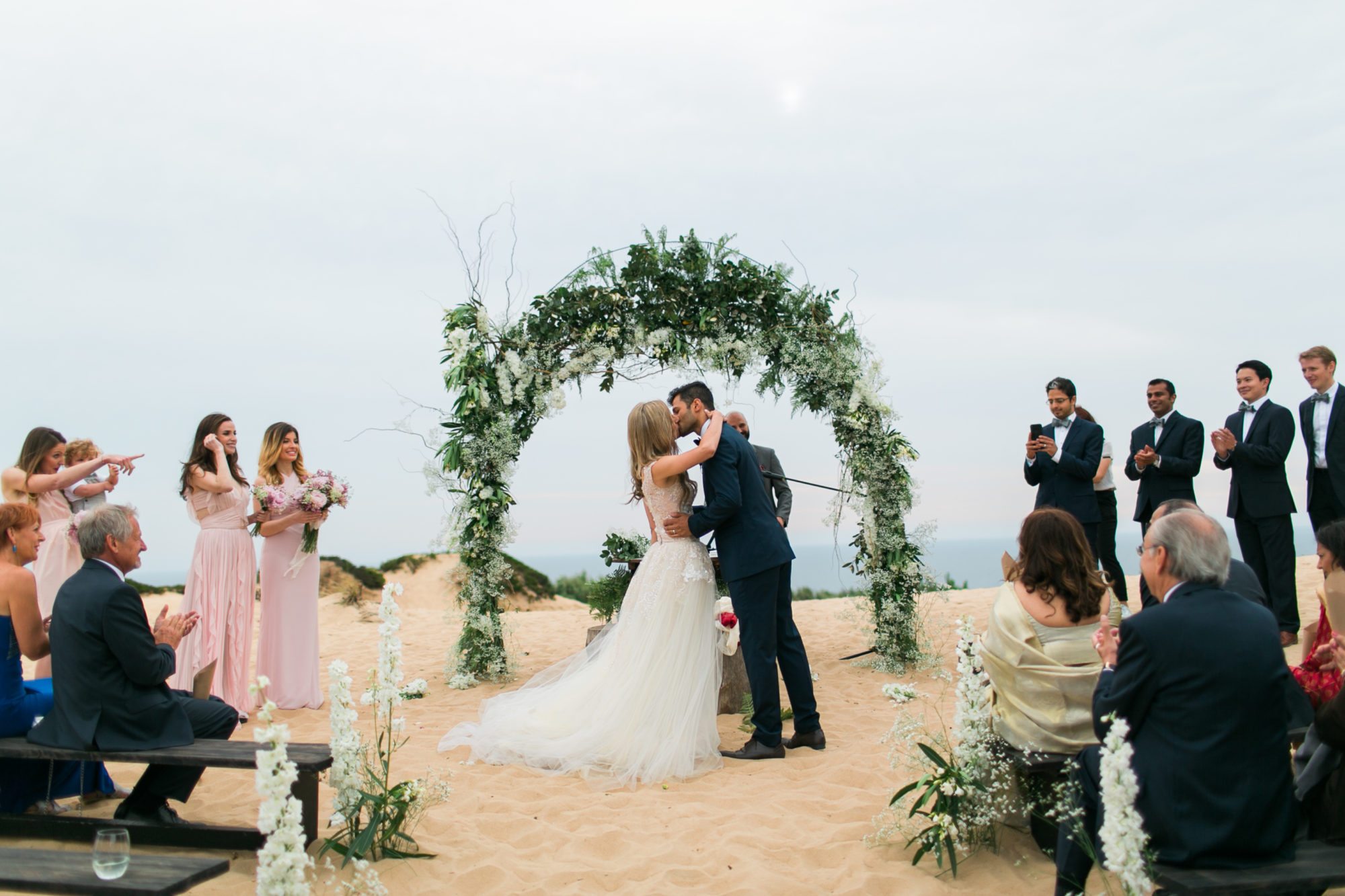 The couple included a few Indian elements in the ceremony. For instance, Ebner’s sister tied a red-and-white scarf around the couple as they walked around a fire, and Ajmera presented the bride with a traditional black-beaded necklace, or “mangalsutra”: 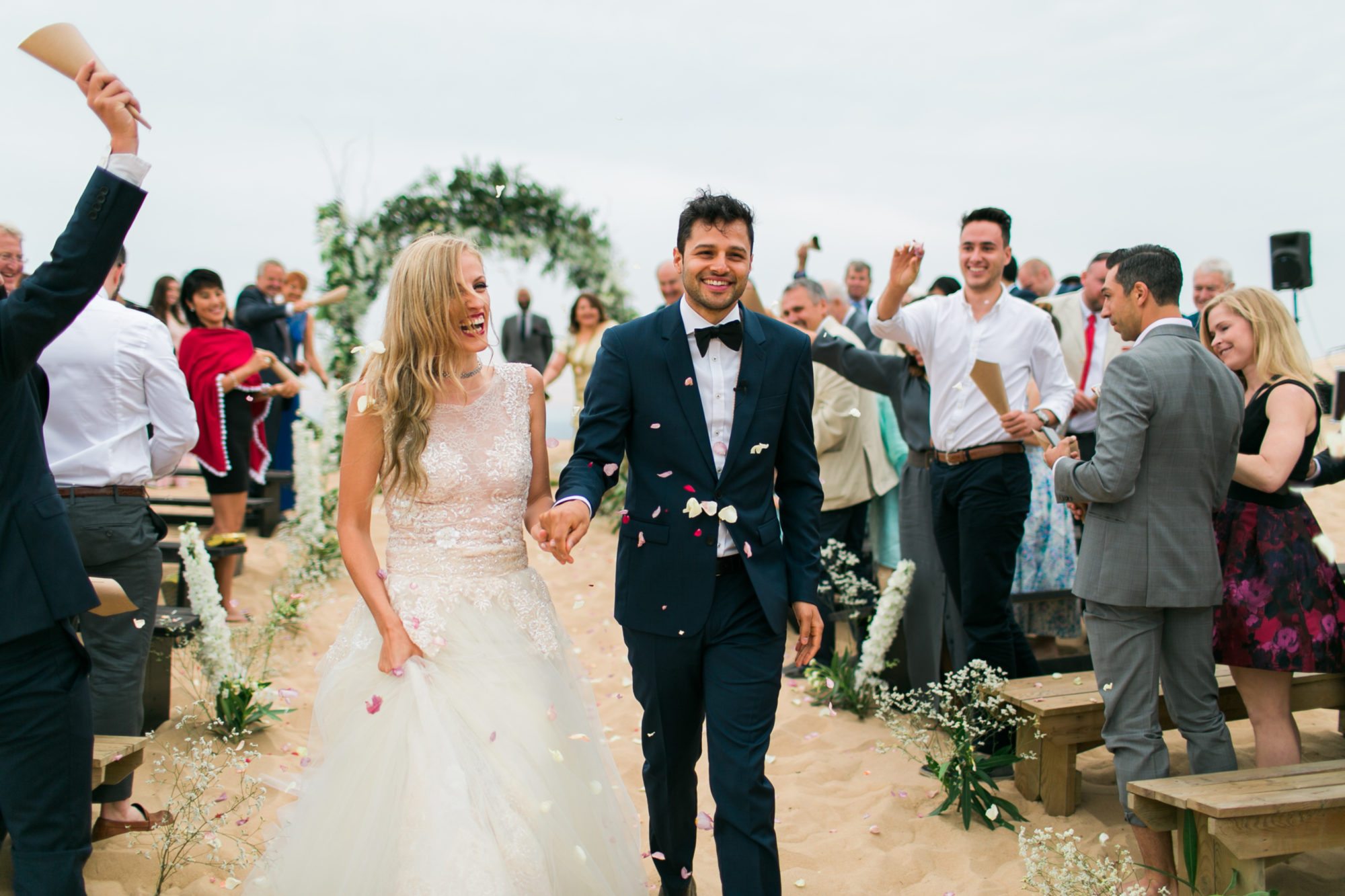 Before dinner, guests gathered in the garden for cocktails: 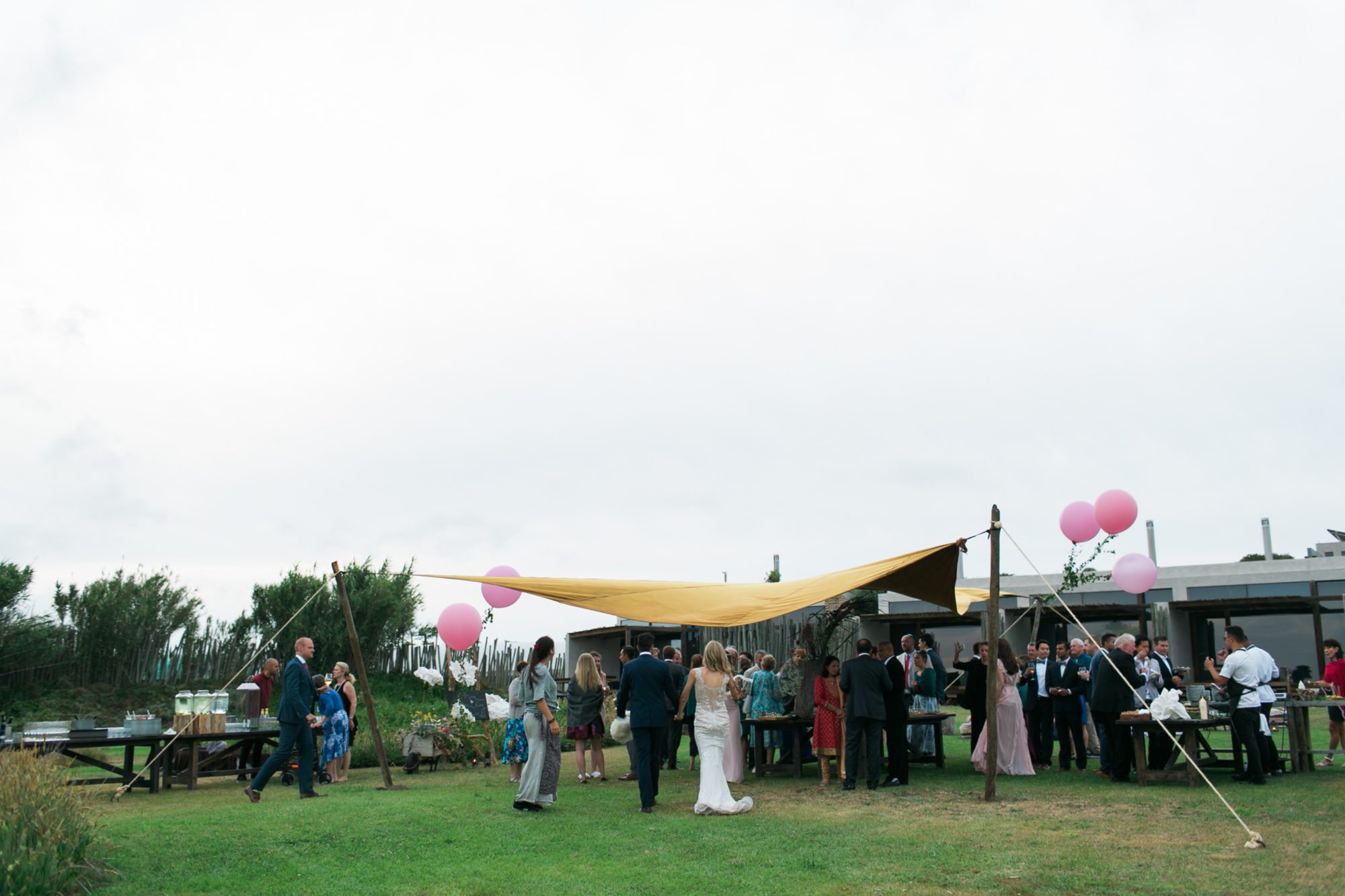 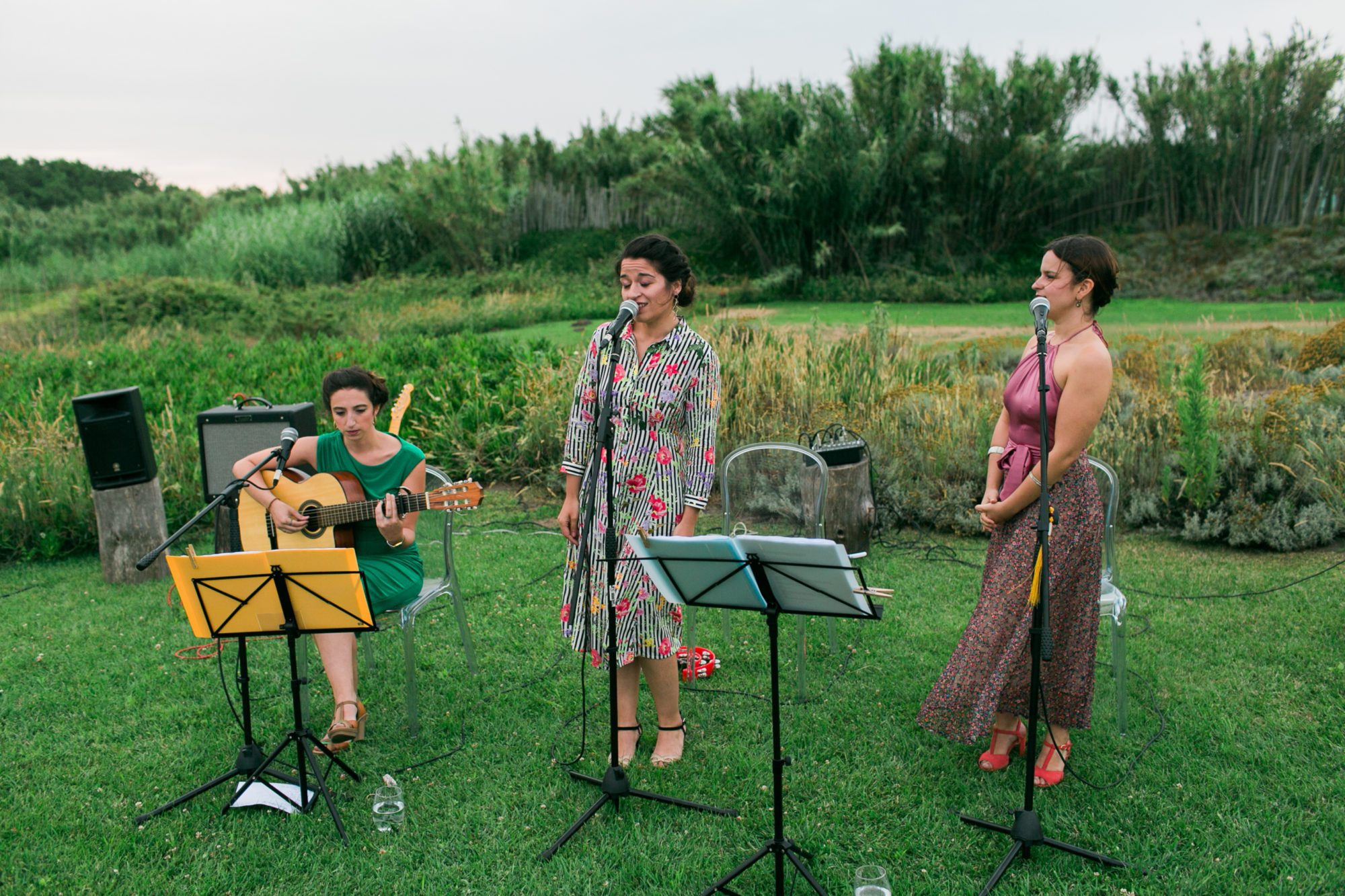 During dinner in the greenhouse, there were flowers everywhere. Ebner says the baby’s breath hanging from the ceiling gave off an angelic vibe: 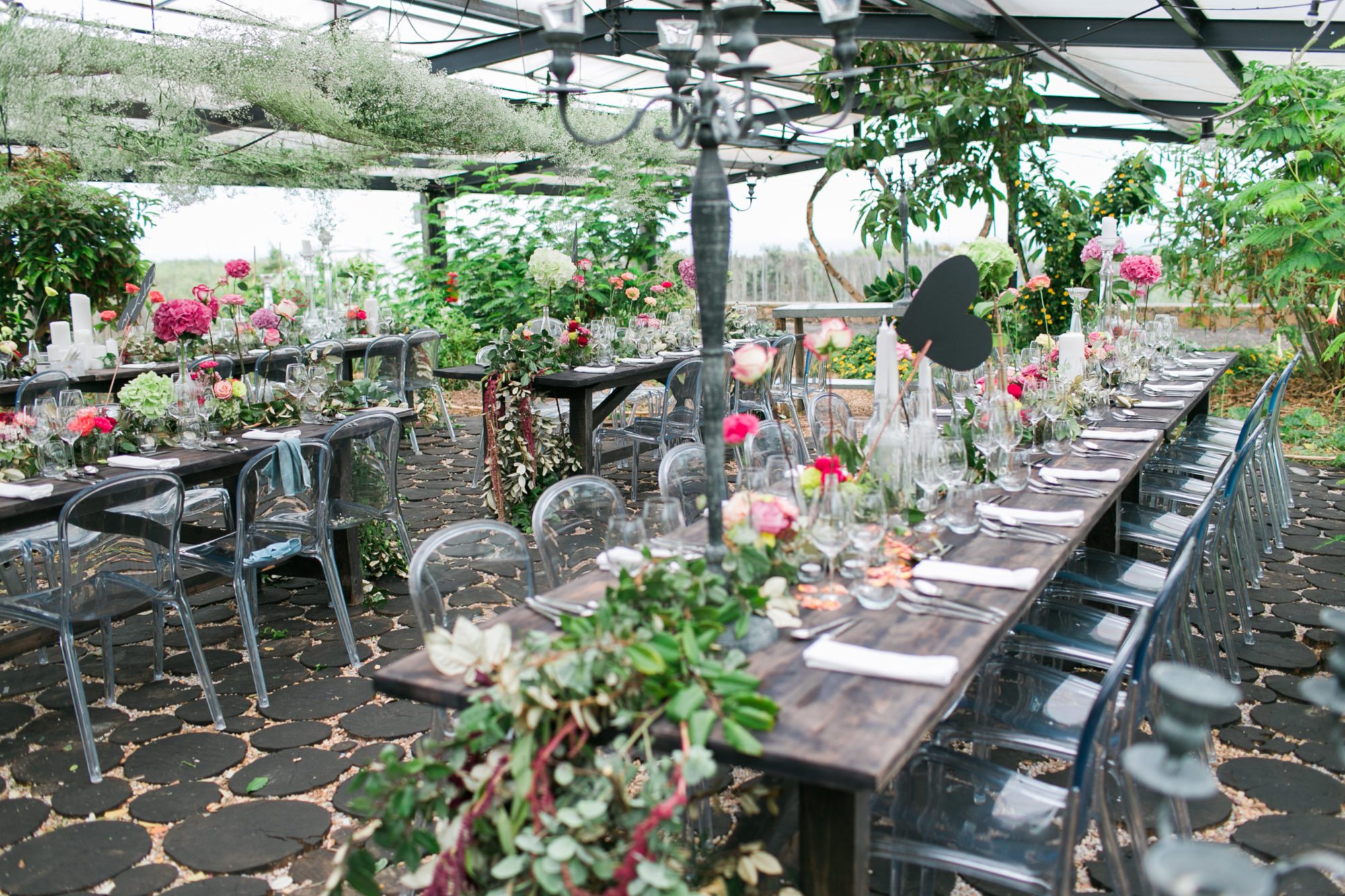 The couple gave nicknames to each of their guests and scrawled them in chalk at each table setting: 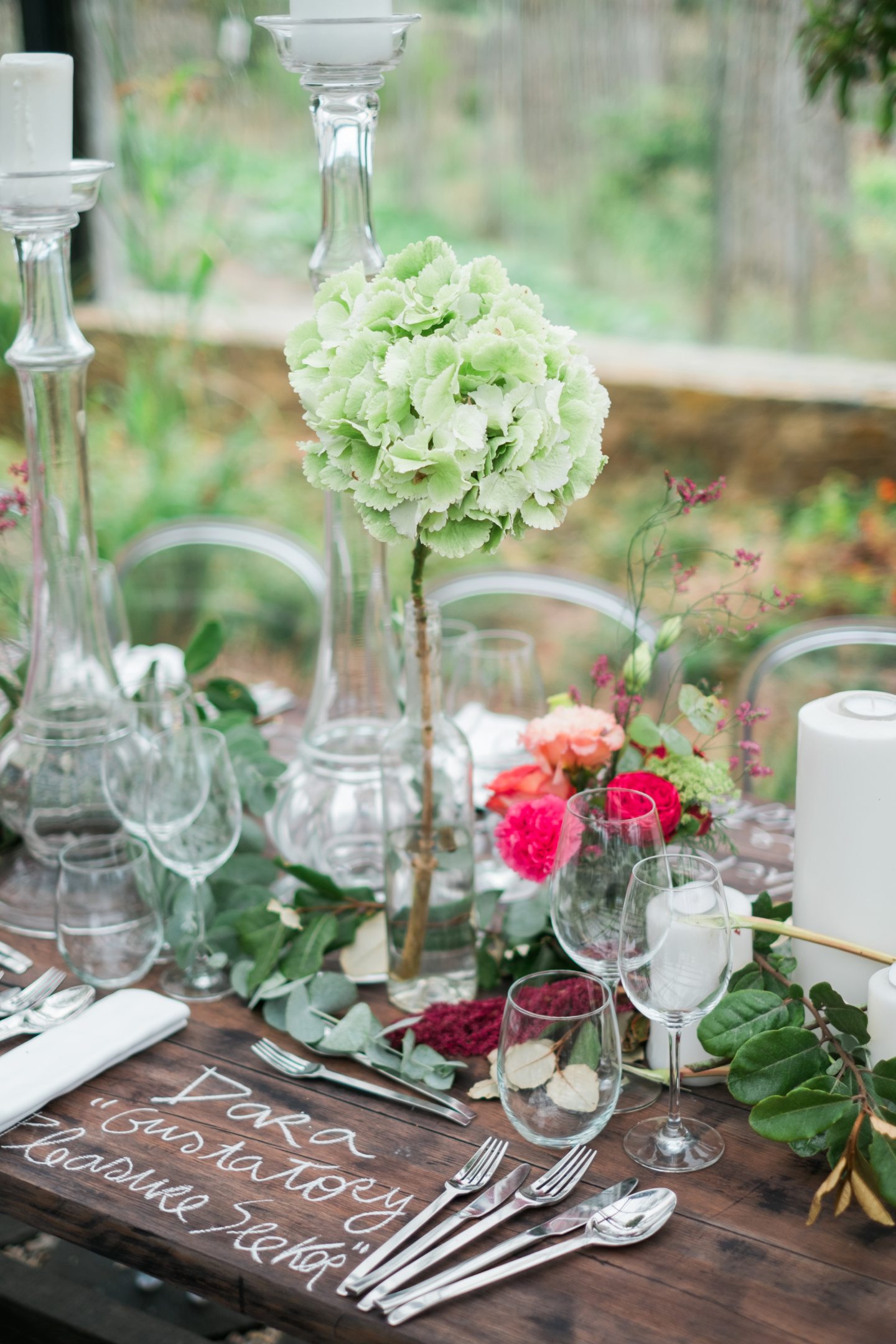 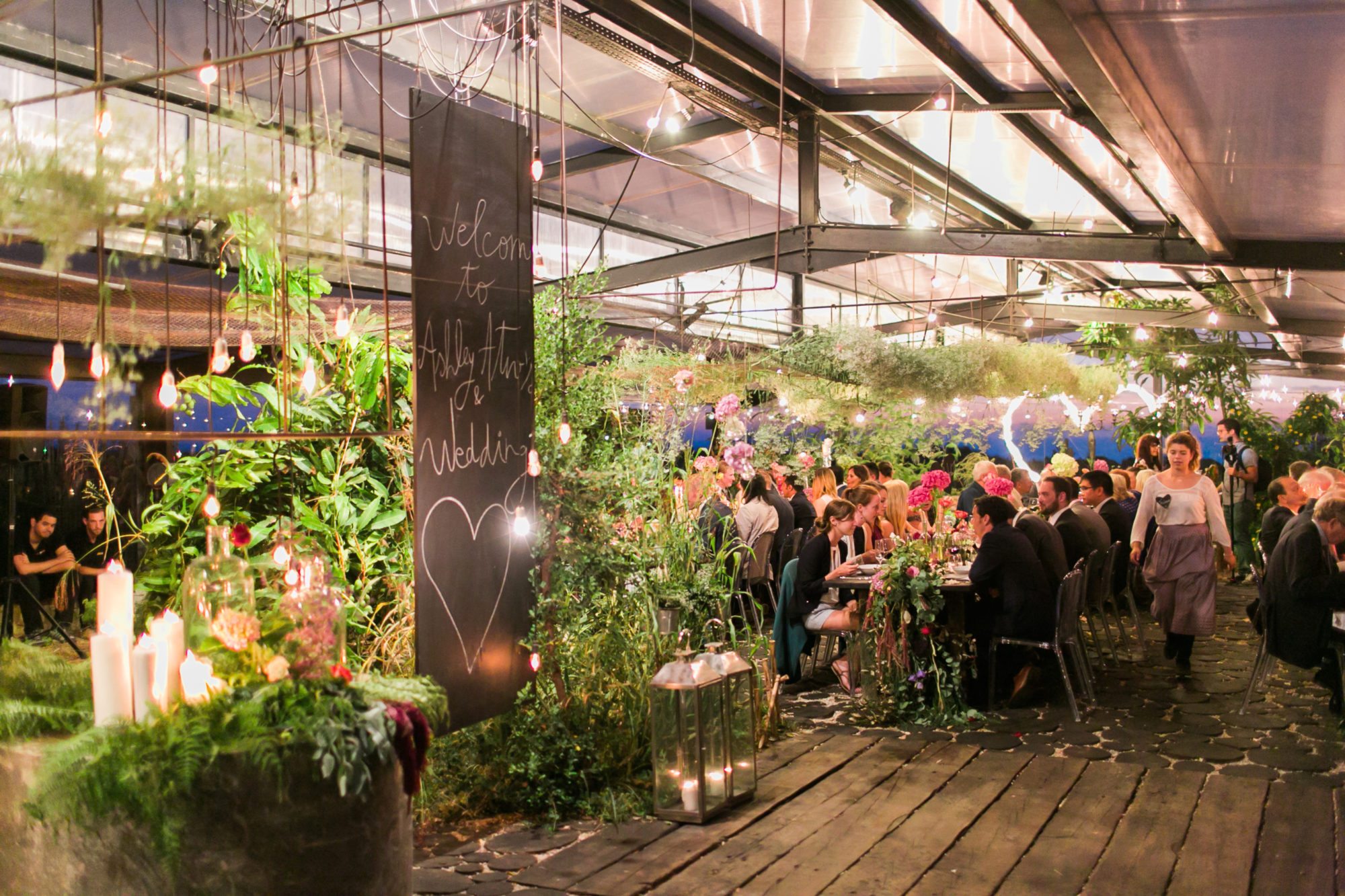 The bride’s father and stepmother ended up performing an epic rap about the couple: 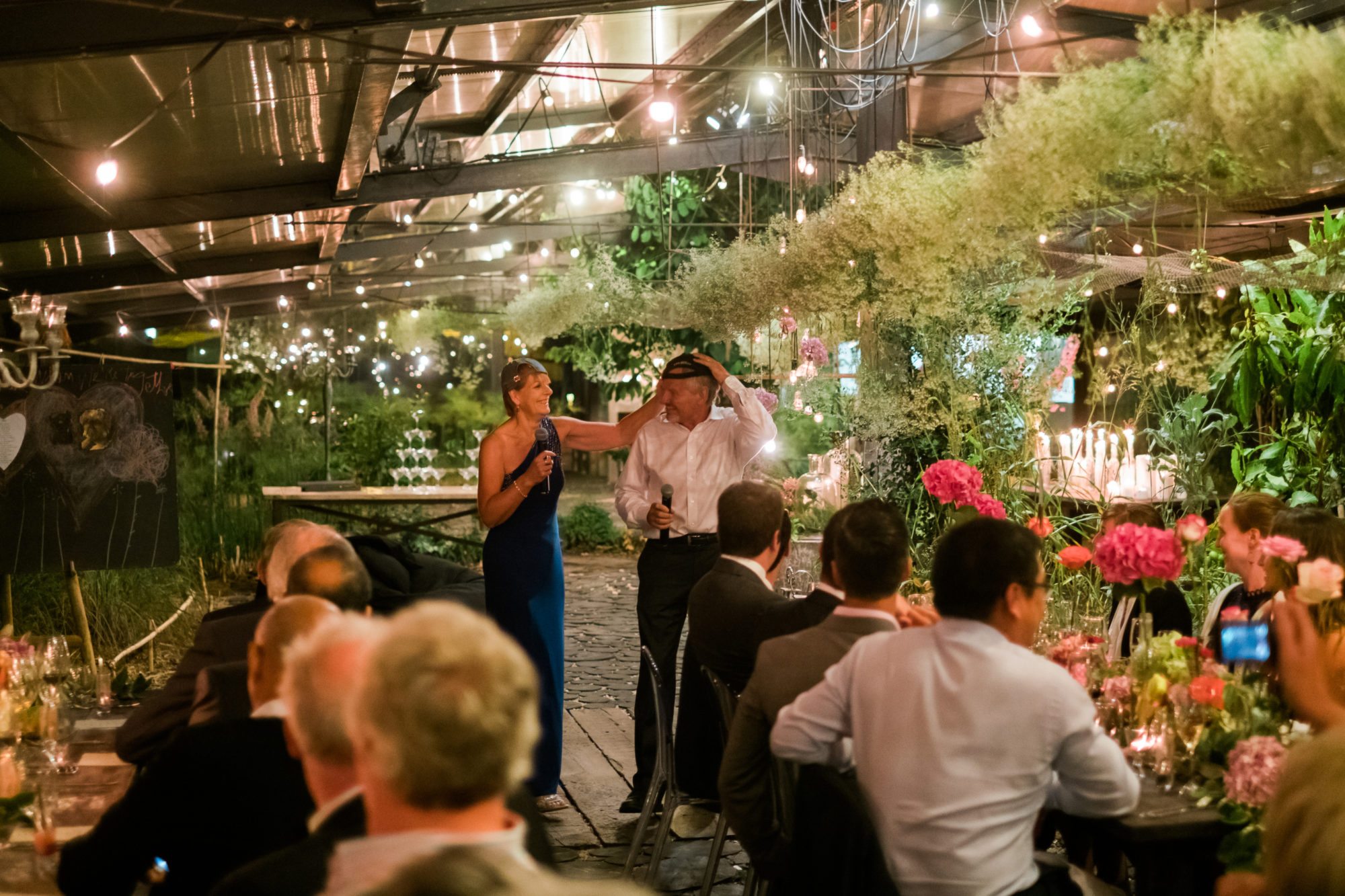 After dinner, the staff poured Telmont Drappier champagne, chosen by the bride’s mother, Liz Palmer, a champagne connoisseur who recently wrote an award-winning book called The Ultimate Guide To Champagne: 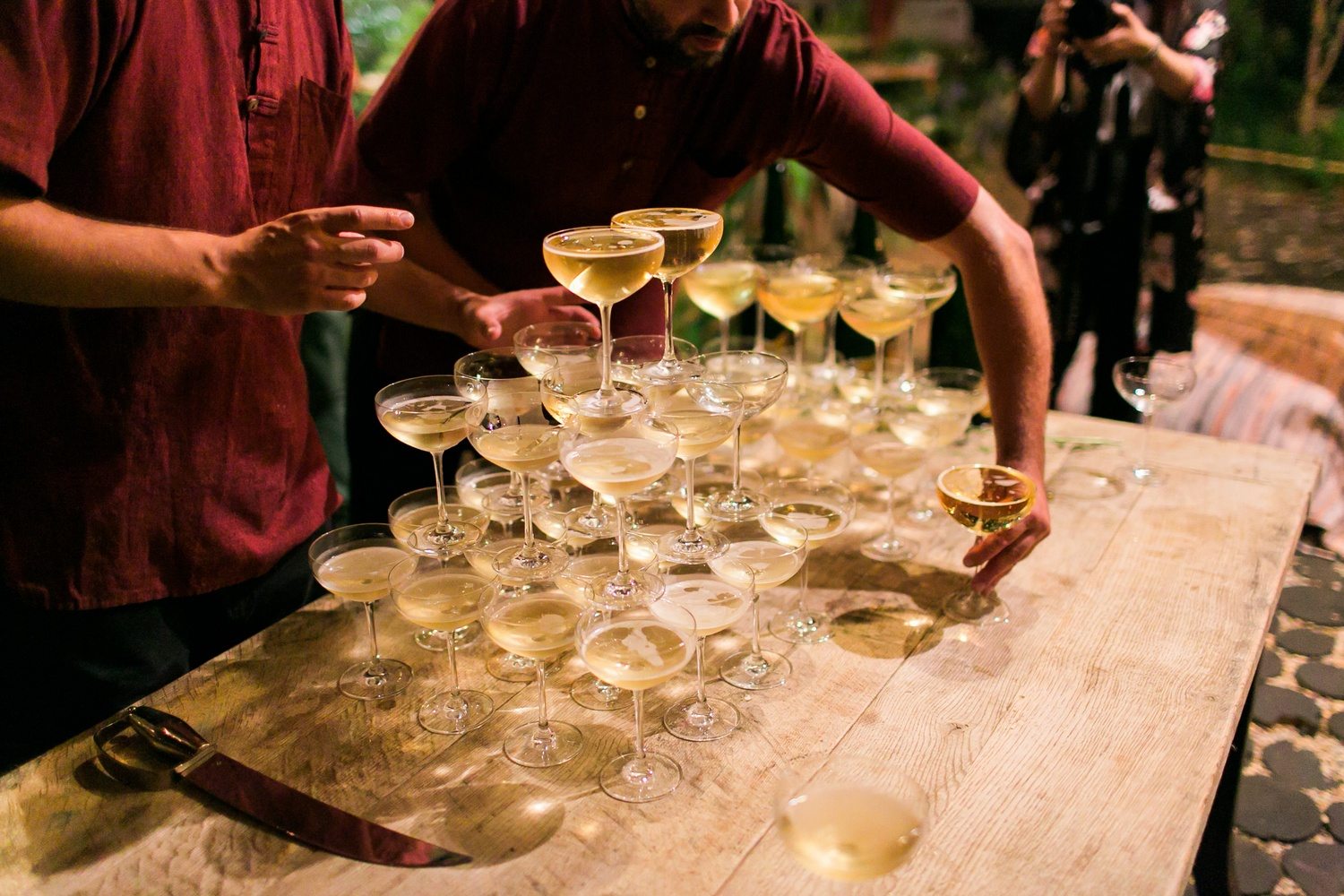 Palmer made a toast at dinner: 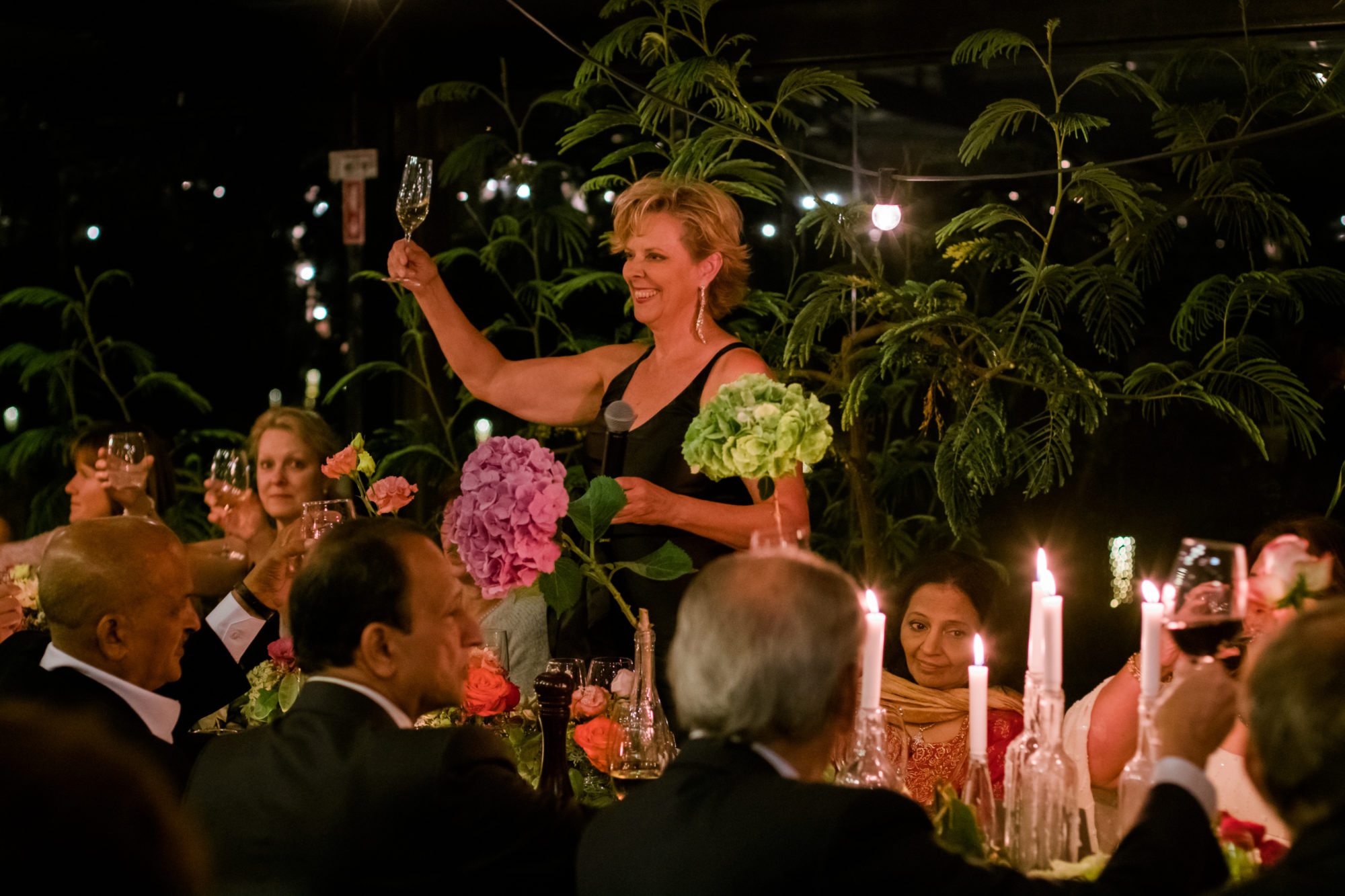 After grabbing flutes of champagne, guests strolled through a pathway of glowing firepits back to the hotel’s lobby for dessert and the dance party (this photo was taken earlier in the day): 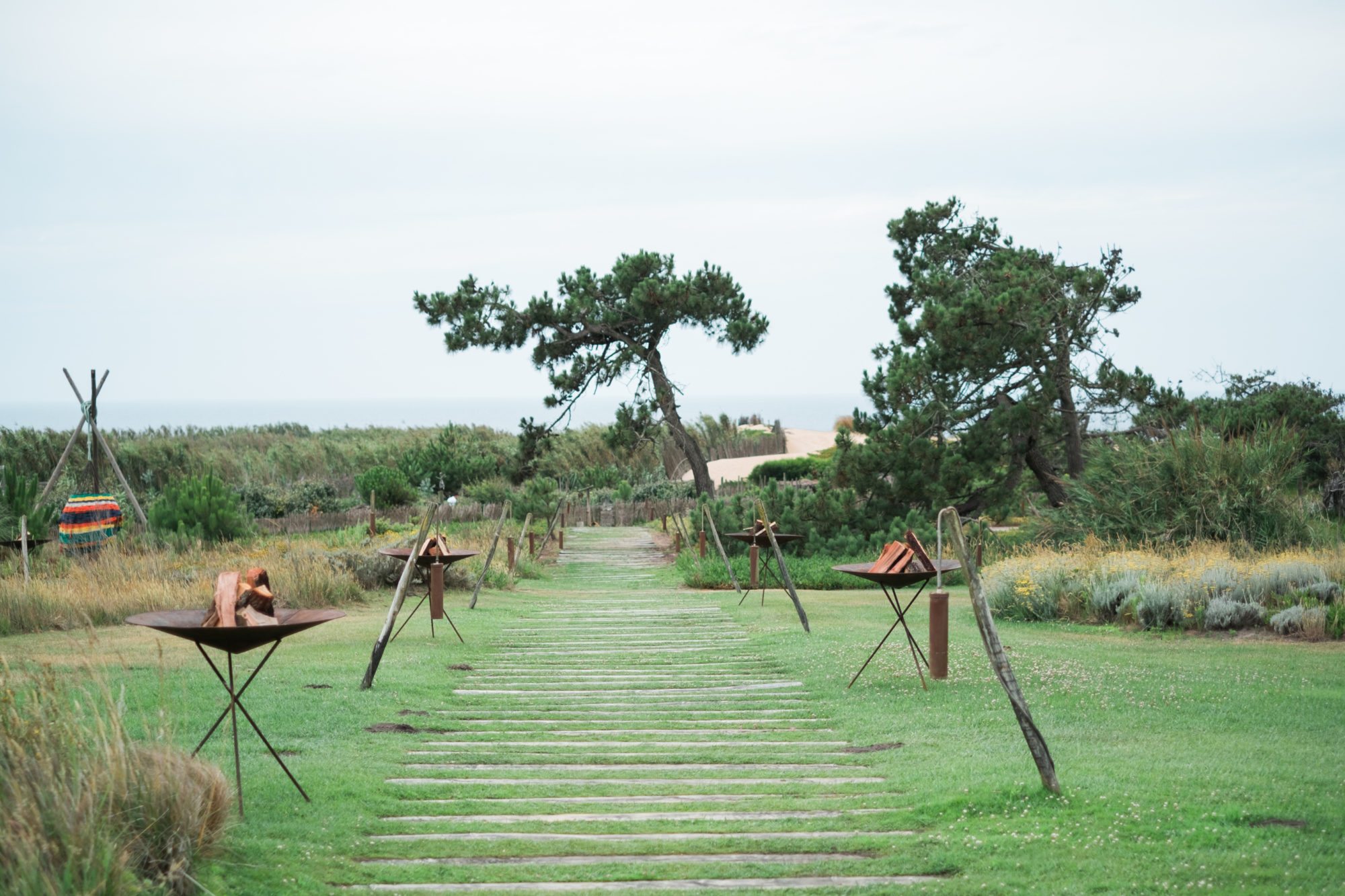 The couple indulged in a layered lemon-vanilla cake decorated with blue and yellow edible flowers: 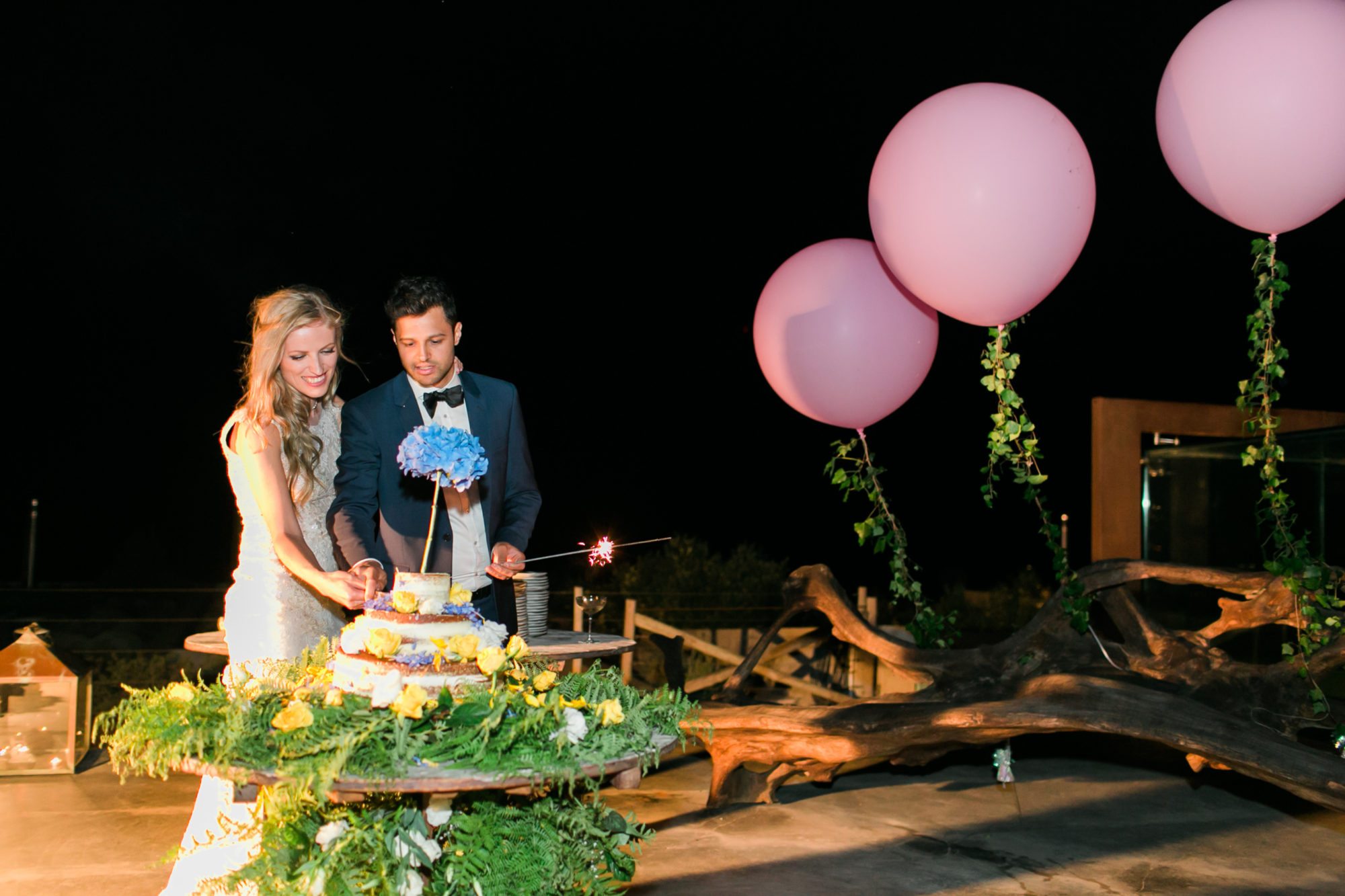 Ebner then surprised Ajmera by performing a traditional Indian dance with her bridesmaids: 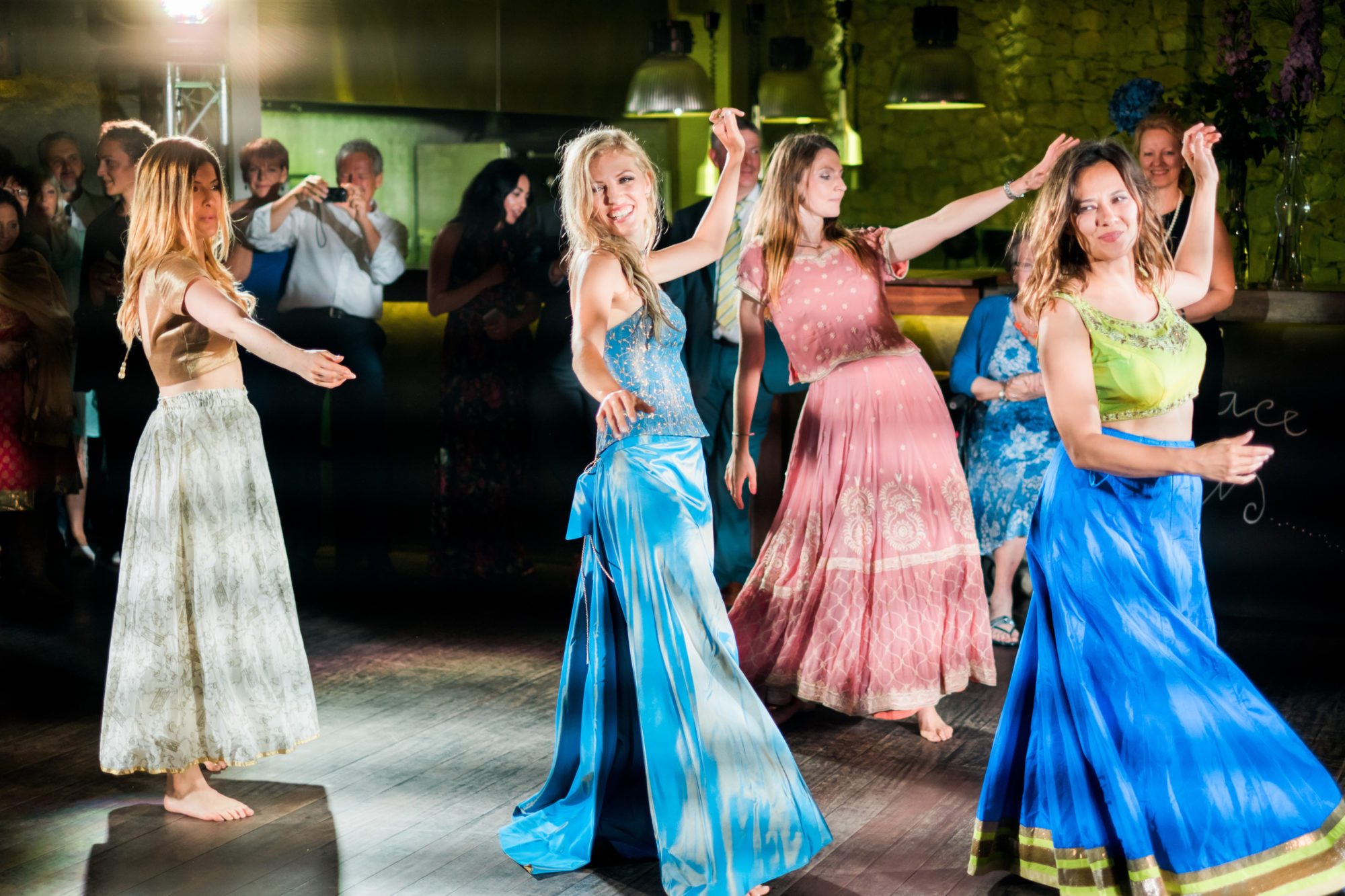 The party lasted until 5:30 a.m. There was a surprise late-night barbecue for anyone who wasn’t satisfied by the veggie offerings: 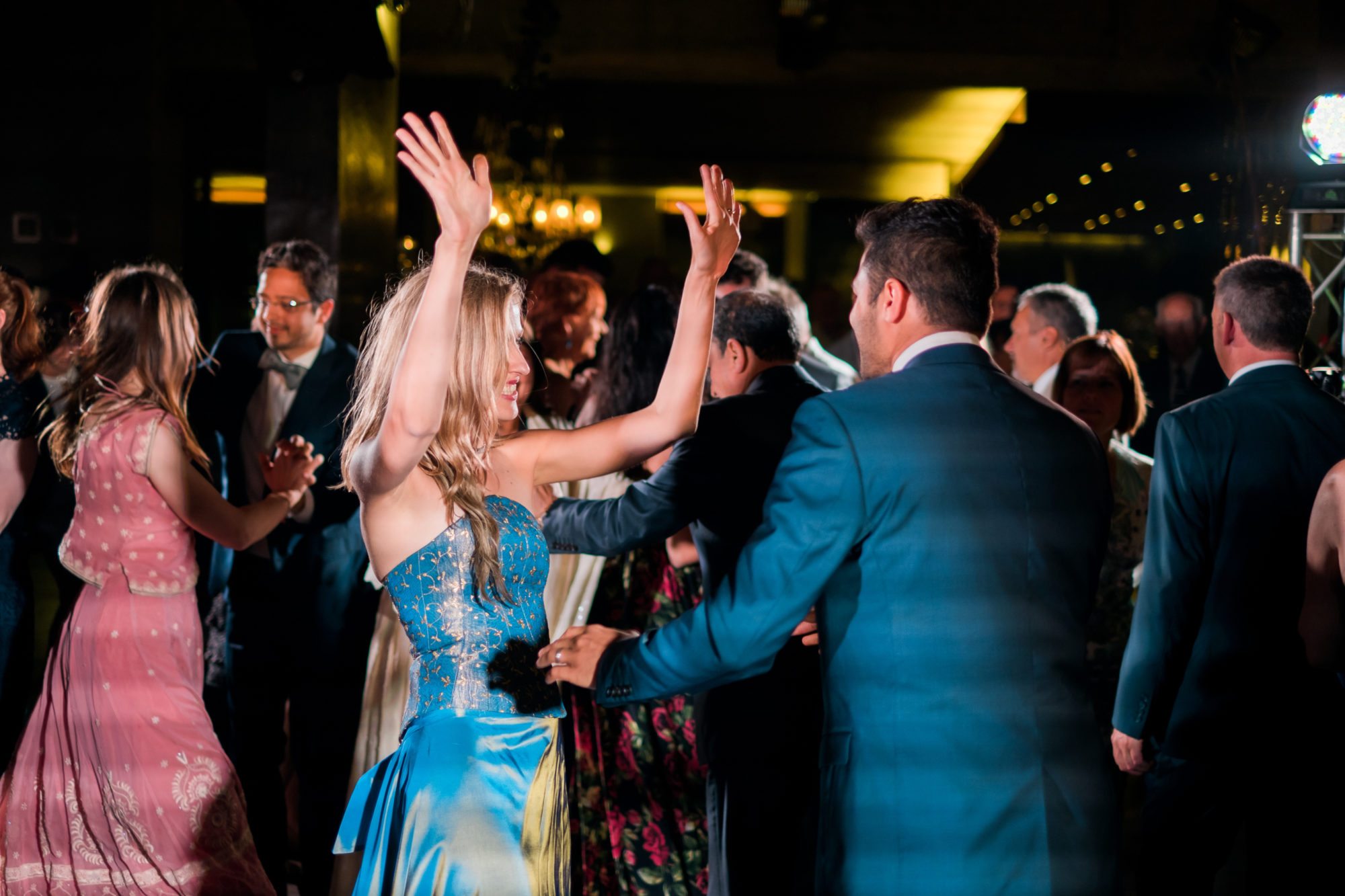