Real Weddings: Inside a glam, multicultural celebration at the Aga Khan Museum

Real Weddings: Inside a glam, multicultural celebration at the Aga Khan Museum 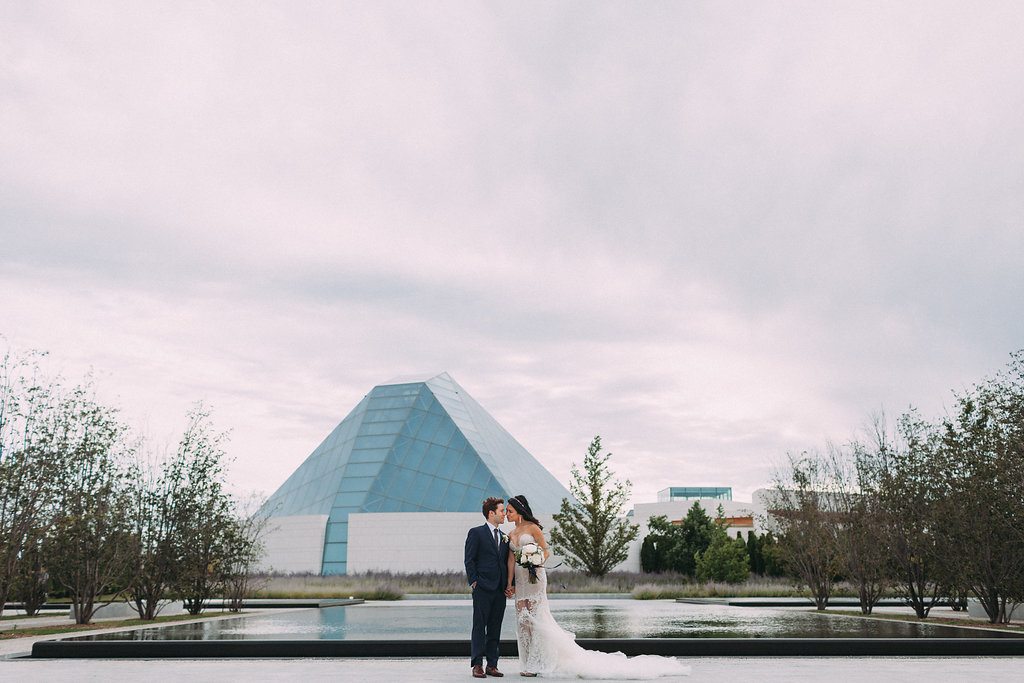 Steve Glinert, a portfolio manager at Scotiabank, and Tiffany Leigh, a freelance journalist, lived three doors down from each other while studying at the University of Waterloo, but never met until 2013, when they matched on OkCupid. “The timing was perfect,” says Leigh. “We were both in the right part of our lives for a relationship.”

Three years later, Leigh invited Glinert to join her on a press trip to Chicago. He refused, saying he had plans with his aunt. Little did she know, he was in cahoots with the PR agency hosting the trip, and surprised her by meeting her in the hotel lobby on the last day of the trip. “They told me I was meeting with a chef, but instead I spotted a familiar-looking duffle bag and a sky-blue shirt I had bought for Steve,” she says. “I knew something was going to happen.” Glinert whisked her off to Eataly, where they bought ingredients for a massive picnic, and then to the waterfront, where he had rented a yacht for the afternoon. He proposed on the bow, with the Chicago skyline in the background. They spent the rest of the weekend dining at Michelin-starred restaurants. “We were just stuffing our faces at that point,” says Leigh.

They initially wanted to elope, but ultimately decided to let their families take part in the celebrations. “We thought, if we’re going to do a wedding, we better do it damn well,” says Leigh. They hunted for a downtown venue in Toronto, but most seemed overpriced. Leigh’s sister suggested the Aga Khan Museum, and when they went to visit, they were instantly sold. They loved that the space was able to accommodate a Jewish ceremony as well as a traditional Chinese tea ceremony, and that the museum’s Middle Eastern roots added another cultural layer to the festivities. “Our friends joked that the wedding was the epitome of multiculturalism,” says Leigh. 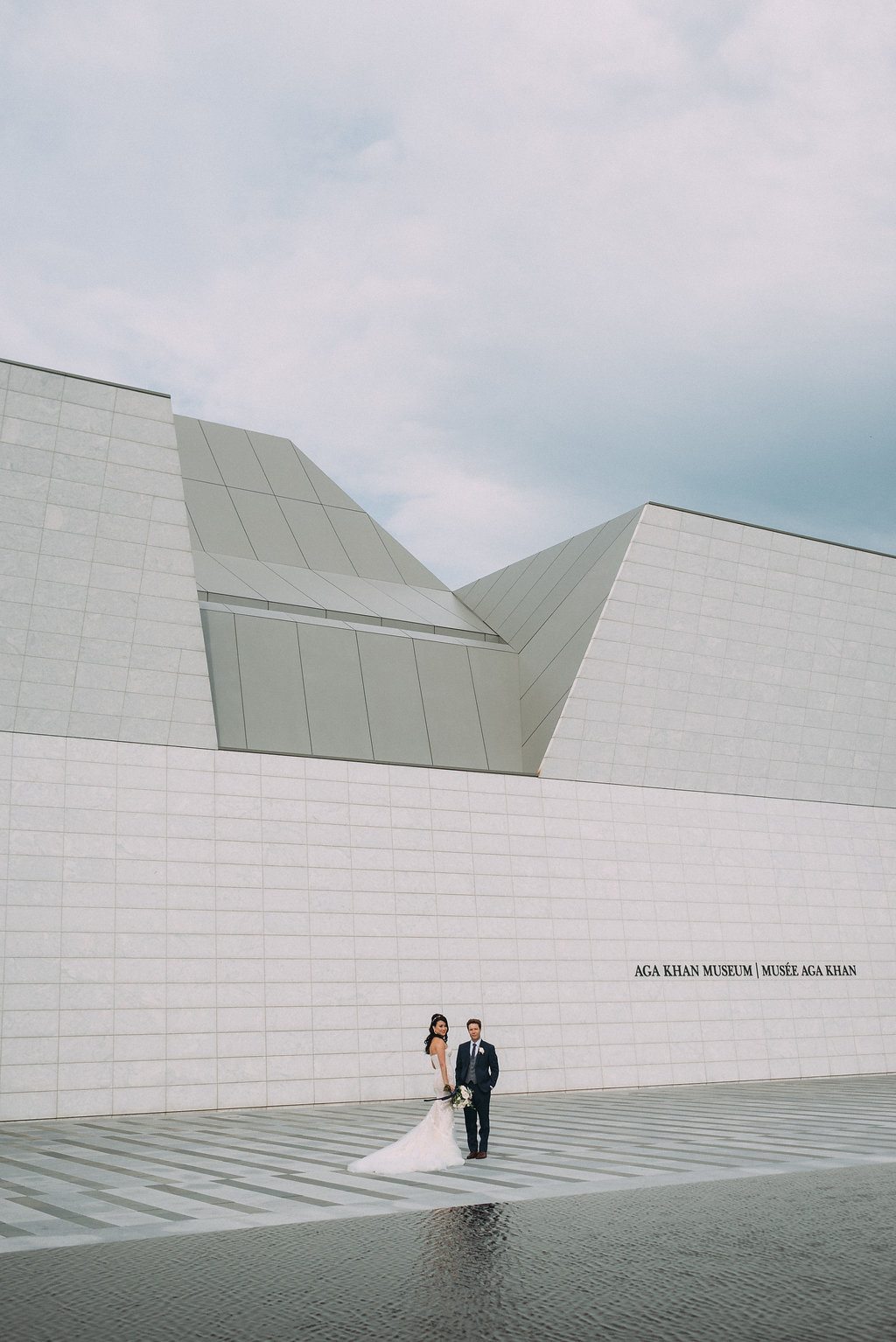 The night before the wedding, the couple hosted out-of-towners at Sassafraz in Yorkville. Afterward, they stayed at the Westin Prince in York Mills and got ready there the next morning. Leigh had two outfits for the day—a white bridal gown and a sparkly take on a traditional red Qipao for the tea ceremony: 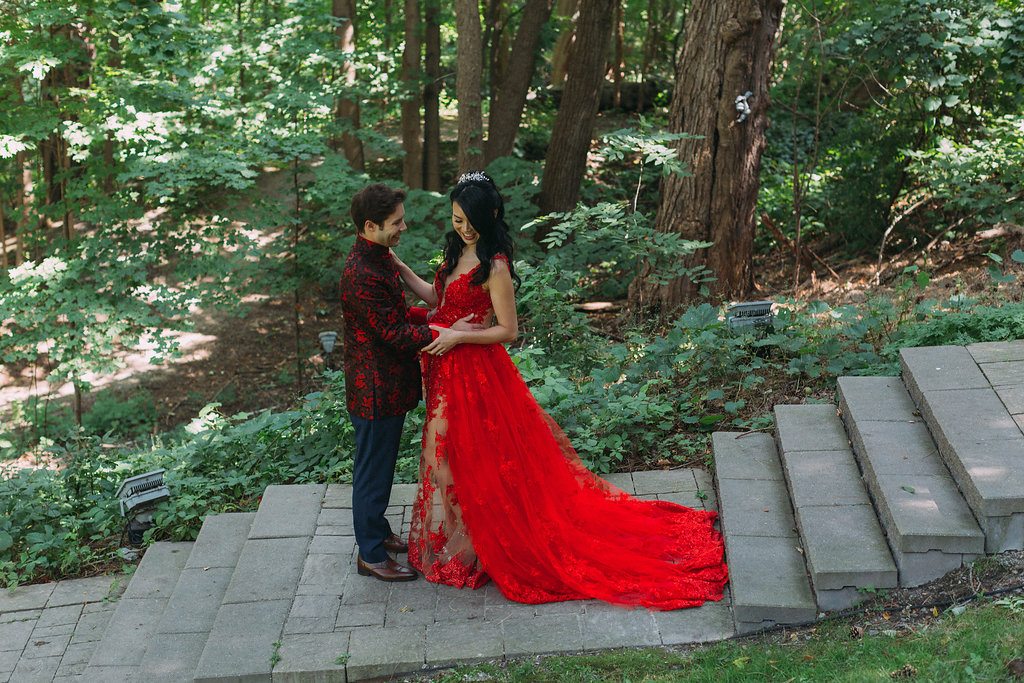 The tea ceremony was held in the Bellerive Room, which houses the ceramics collection of the late Prince Sadruddin Aga Khan and Princess Catherine Aga Khan: 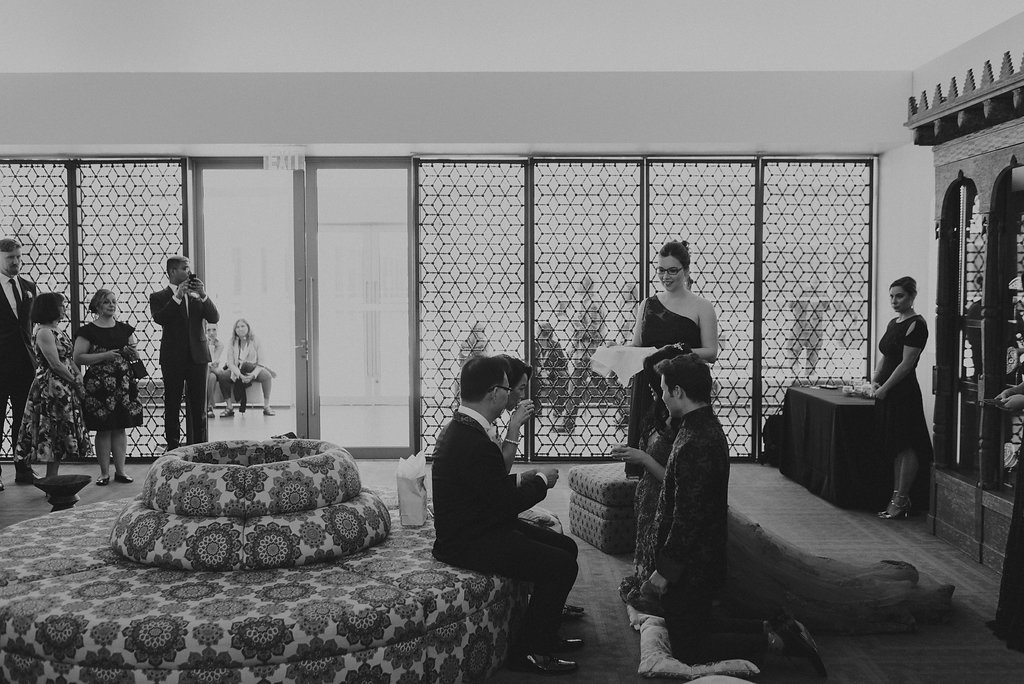 During the ceremony, Leigh’s aunt and uncle gifted her some jewellery: 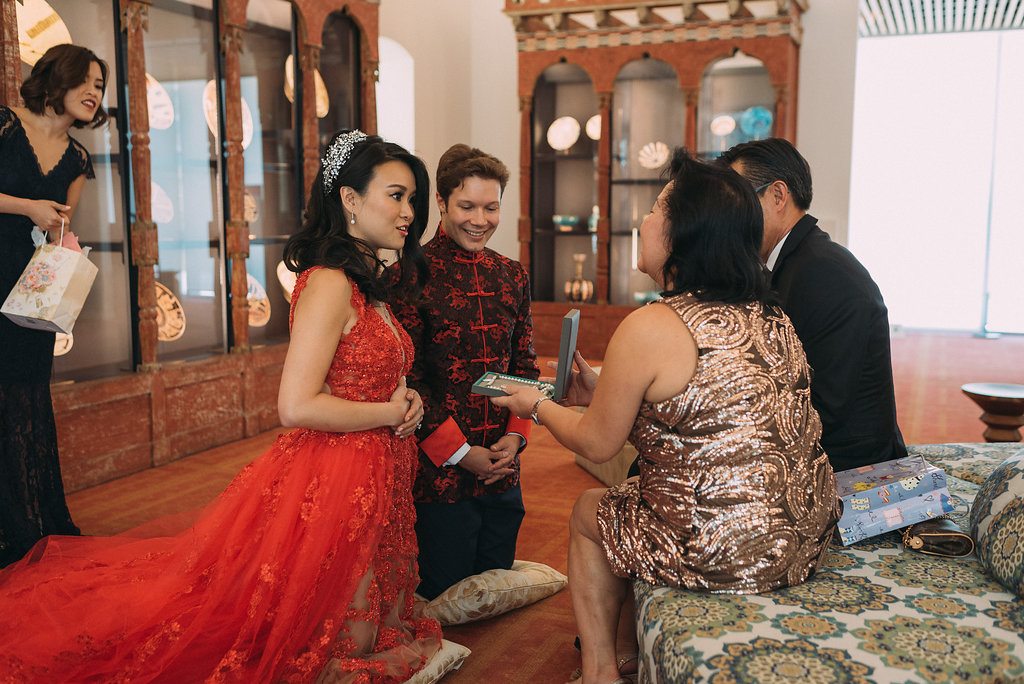 After the ceremony, the couple changed into their wedding outfits. Leigh went with a sheer gown from Israeli designer Inbal Dror, which she found at the Yorkville boutique White. “My style is very feminine, very girly,” she says: 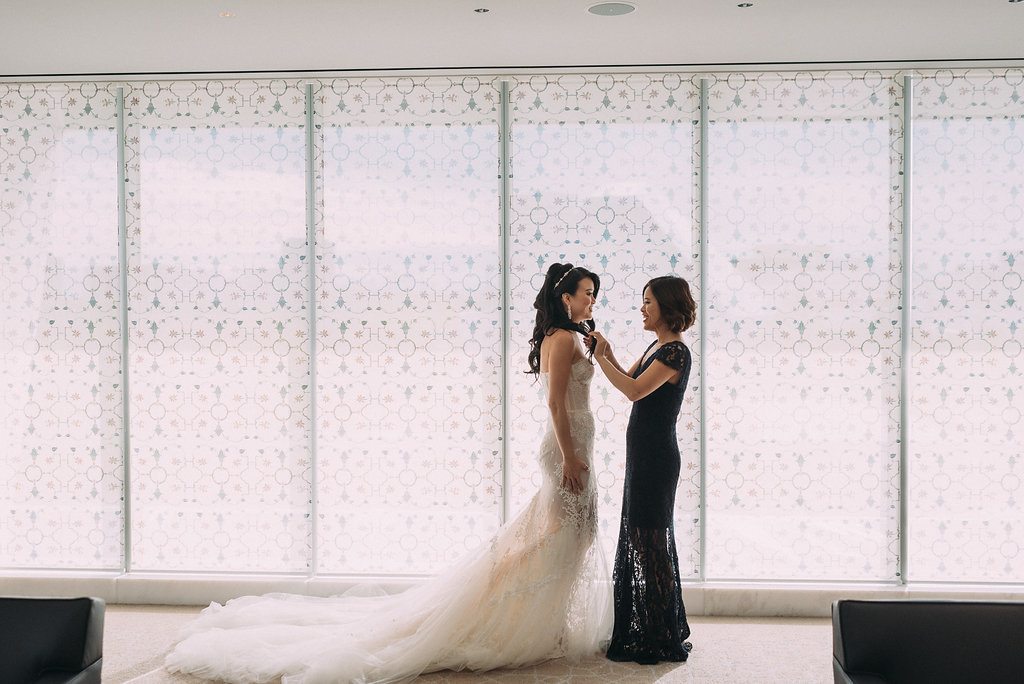 The wedding was held under a floral chuppah in the museum’s courtyard. Leigh has been obsessed with plush lobsters ever since discovering a store selling them on her and Glinert’s first couple trip to Boston. She bought one, and named him “Pinchie”. Since she travels so frequently, she used to post pictures of Pinchie enjoying a view or a meal (he now has his own account). She now has four lobsters (the other three are named PJ, Jumbo, and Tiny), all of which were in attendance. “It’s taken on a life of its own,” she says. “They’re considered family”: 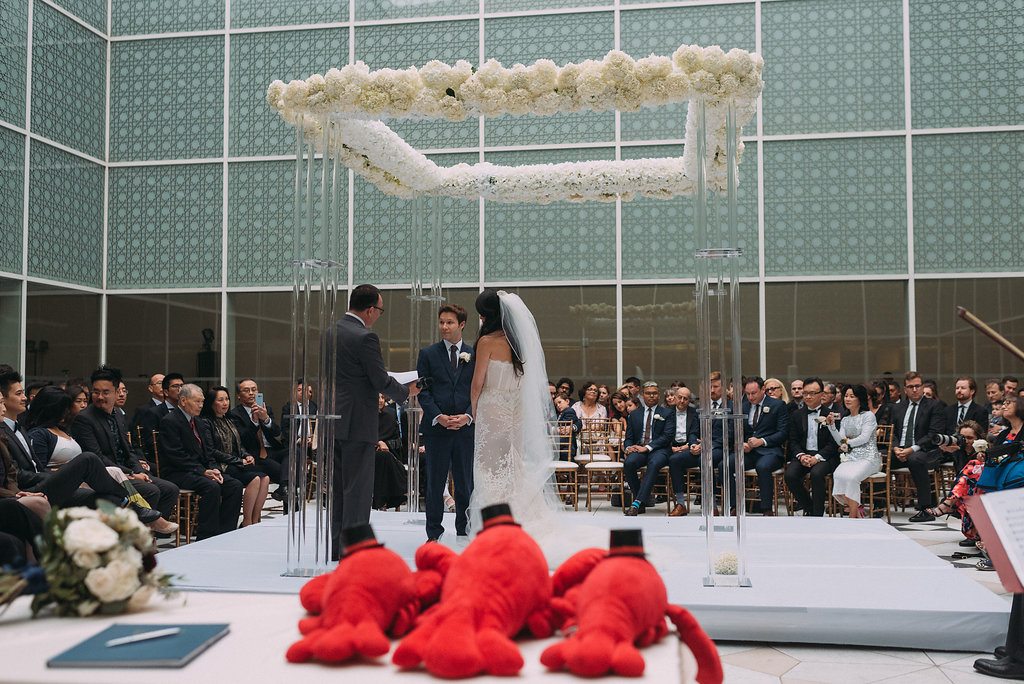 It was a windy day: 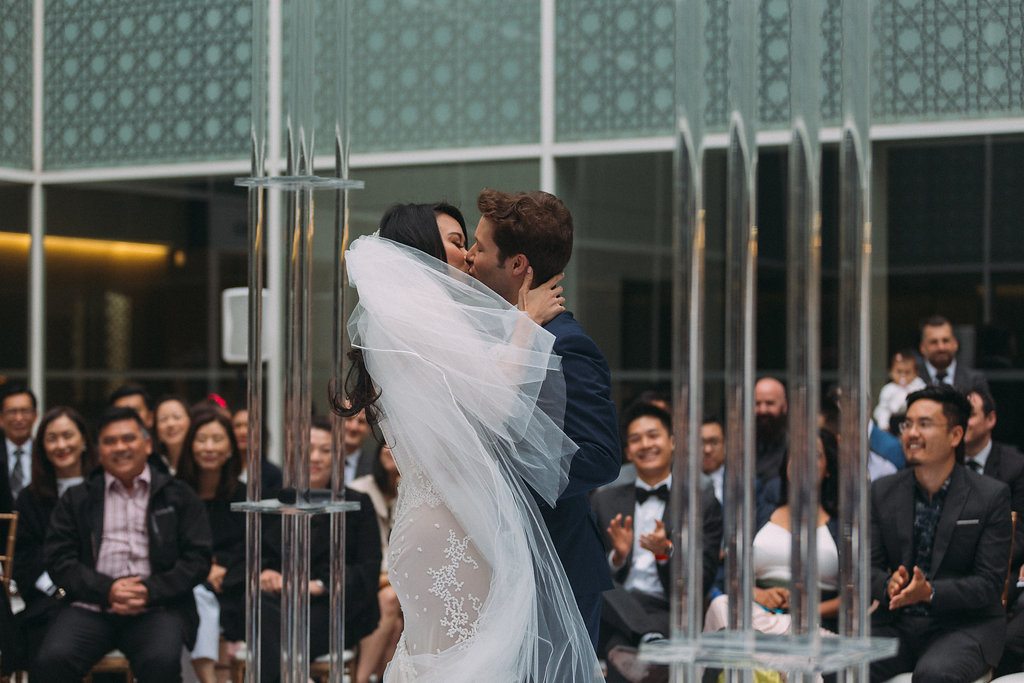 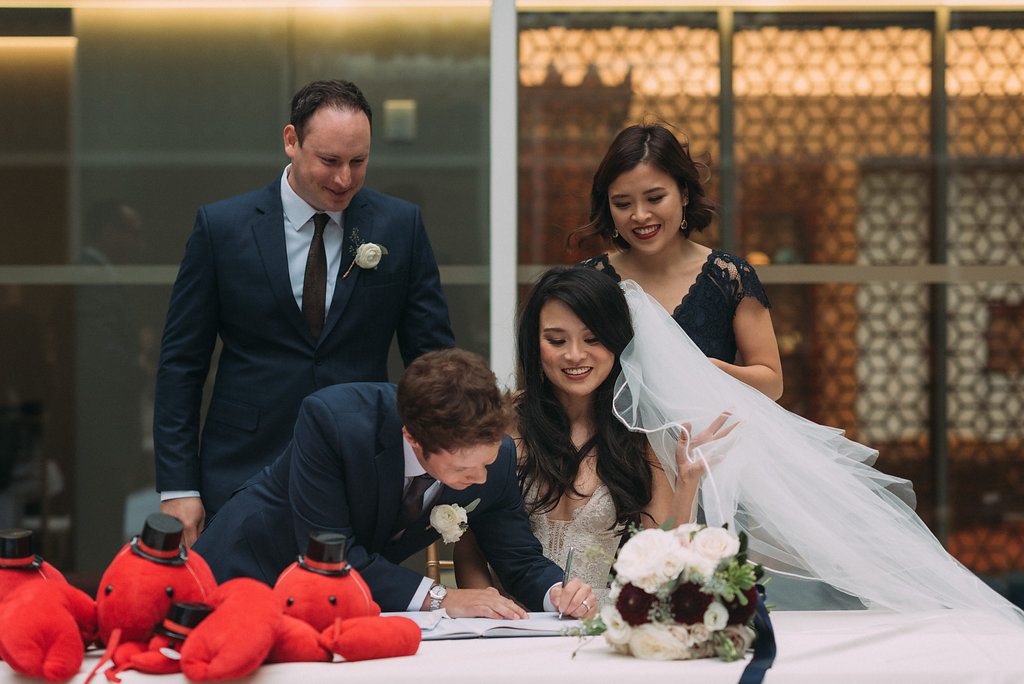 After the ceremony, the bridal party took some photos on the grounds. They loved that they had the museum all to themselves: 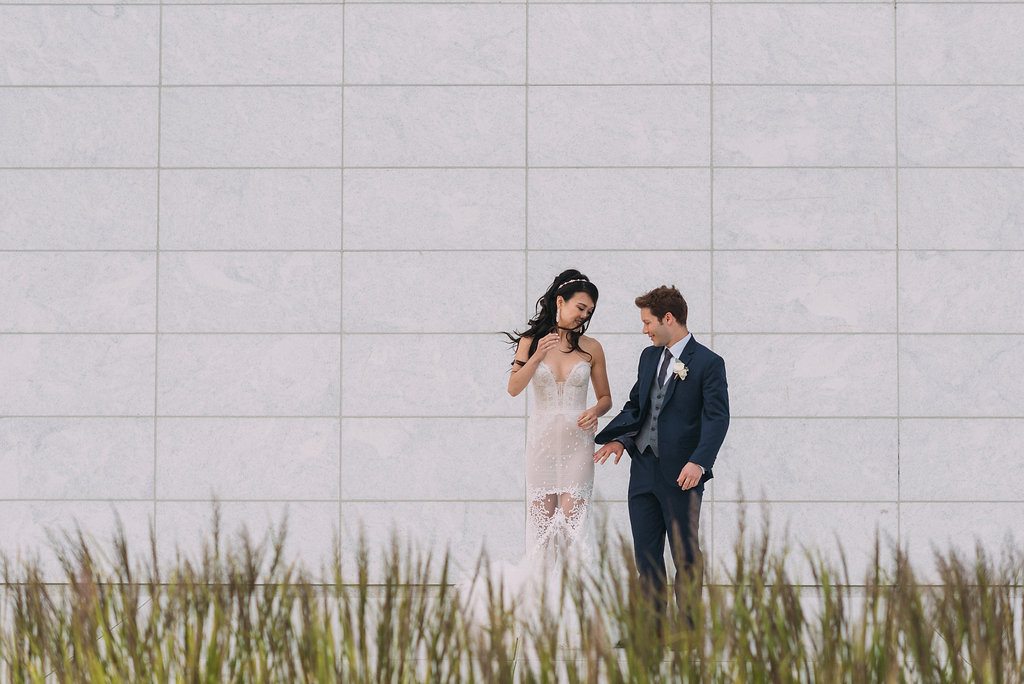 Dinner was held in a tent with copper, royal blue and blush touches: 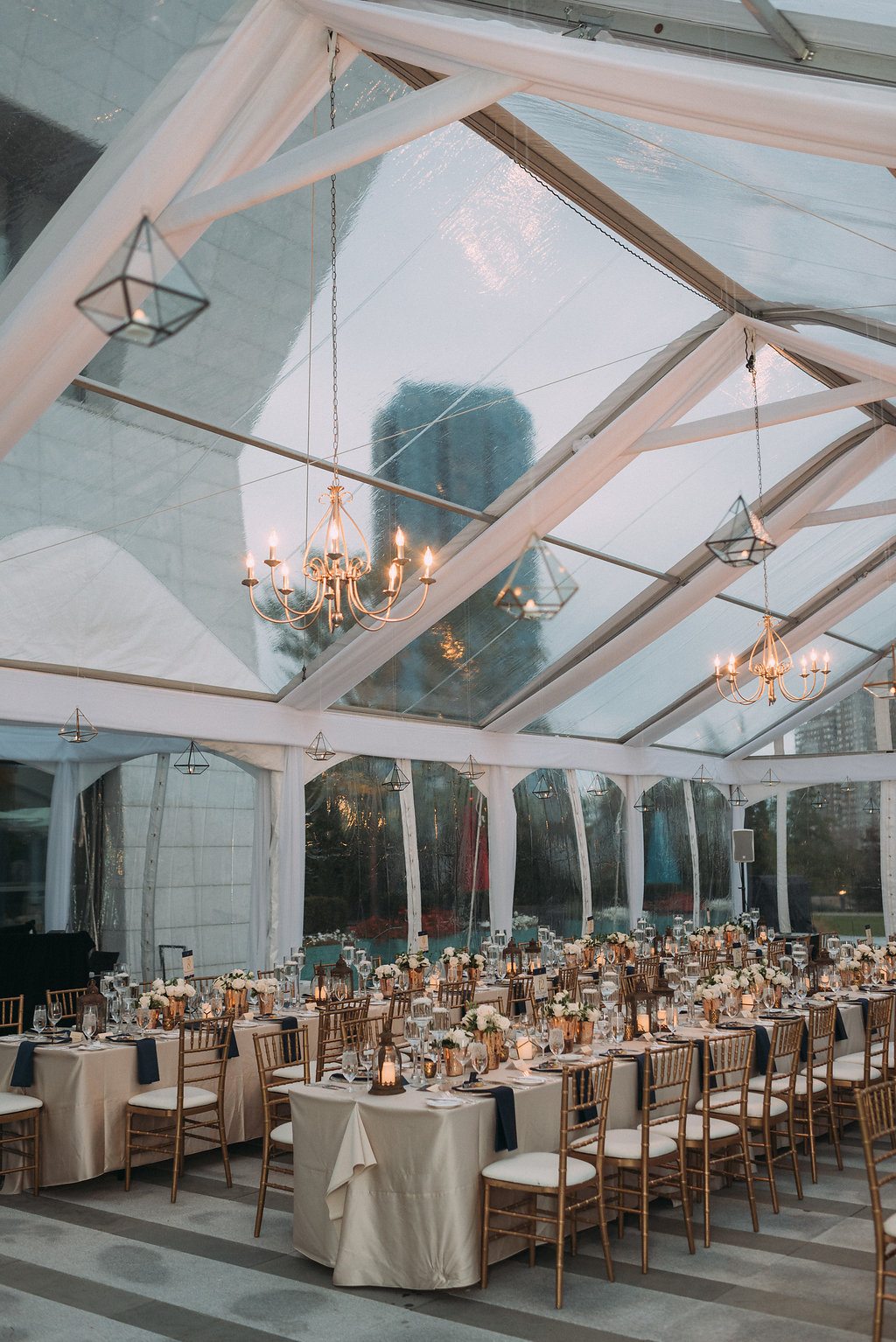 Since Leigh often writes about food, the menu was a priority. They worked with The McEwan Group, the caterers behind the museum’s Diwan restaurant, on a menu of mostly Middle Eastern dishes (there was no lobster). “Everyone still raves about the food,” says Leigh: 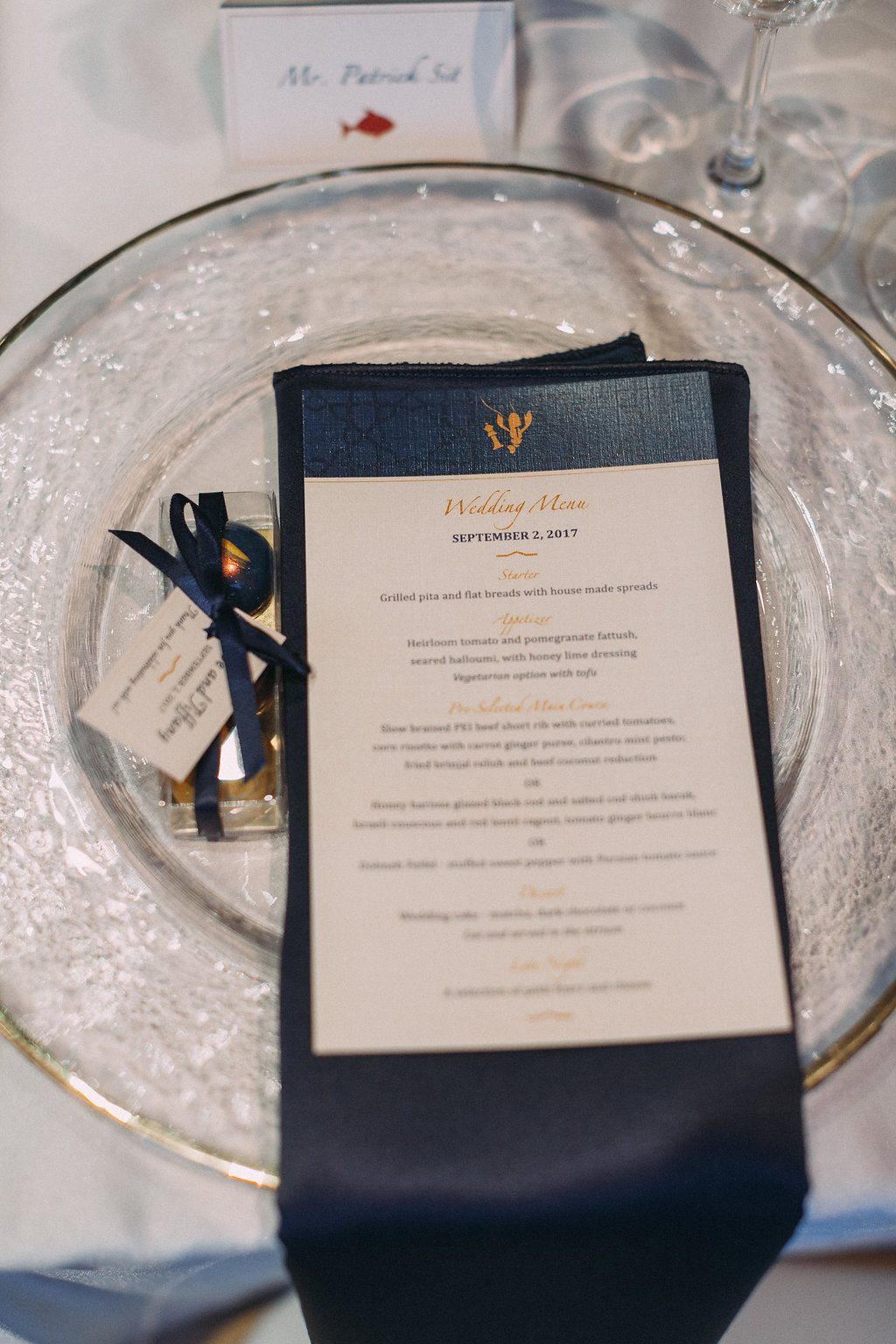 Some members of the bridal party surprised them by showing up in lobster bibs: 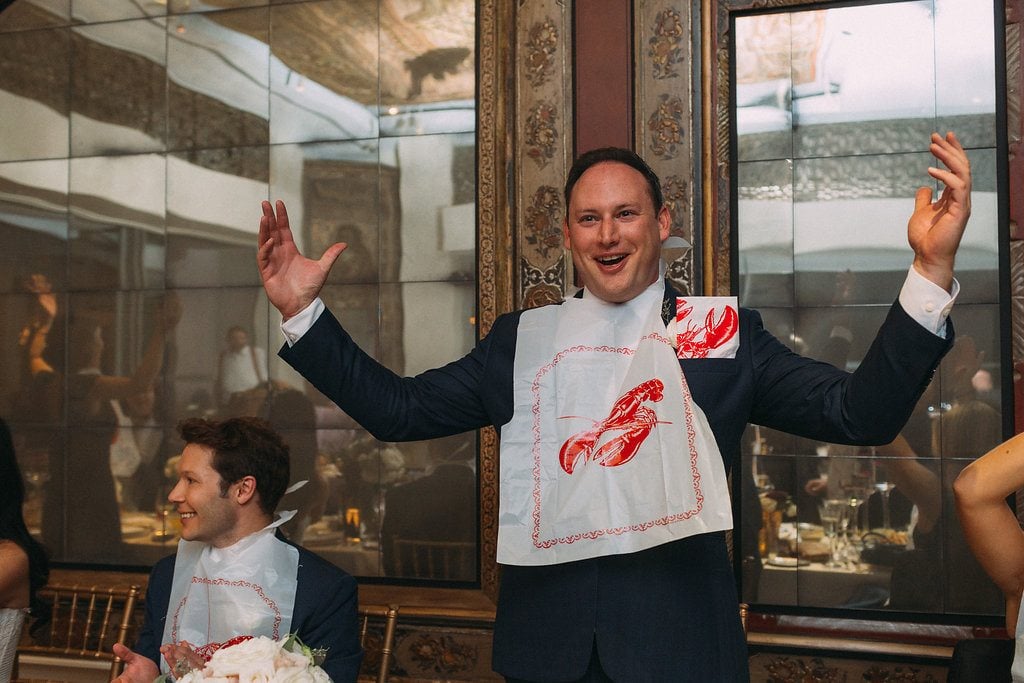 The bride’s parents made a lively toast: 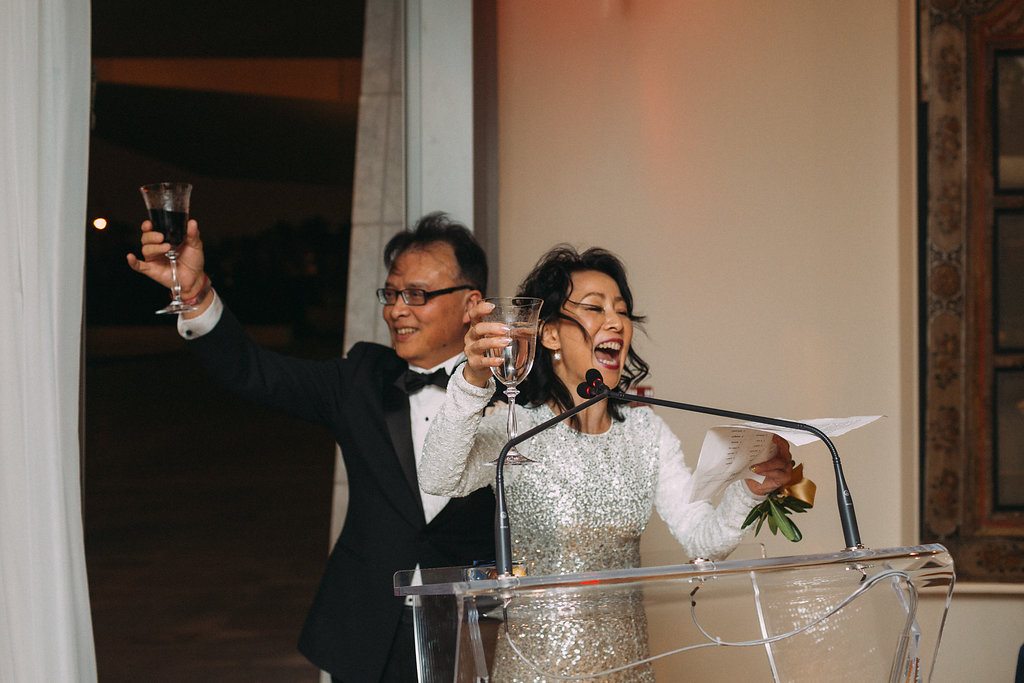 They kicked off the dance floor with the Hora. Leigh almost fell off the chair: 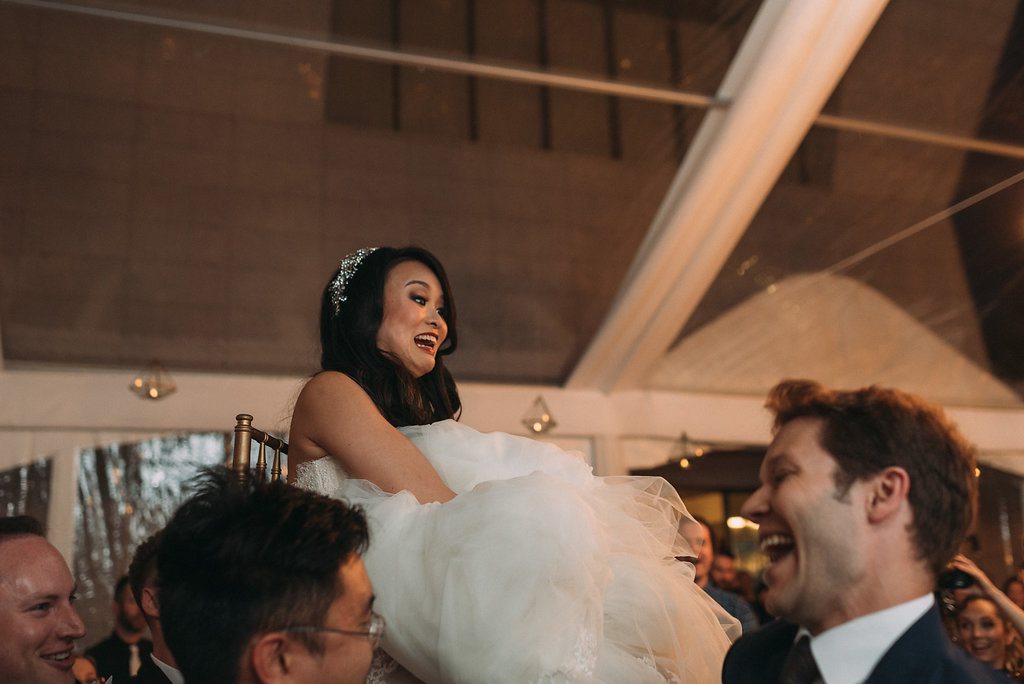 For the rest of the night, Leigh changed back into her tea ceremony look. The couple took a few ballroom dancing lessons before the wedding, and their first dance was to Bryan Adams’ “Everything I Do.” 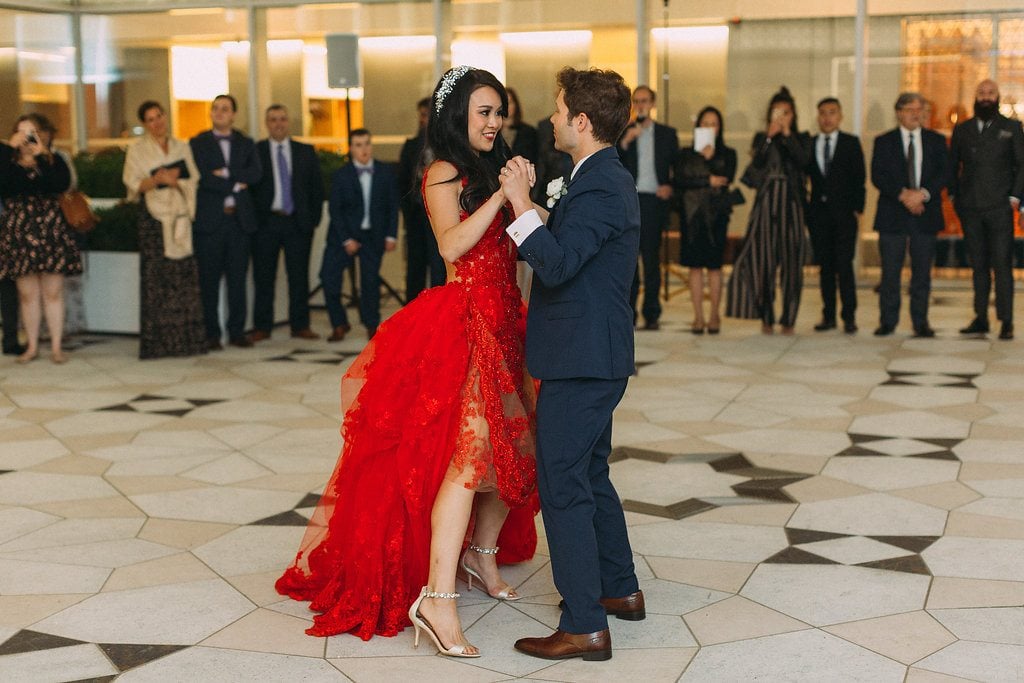 Of course Pinchie got to dance, too: 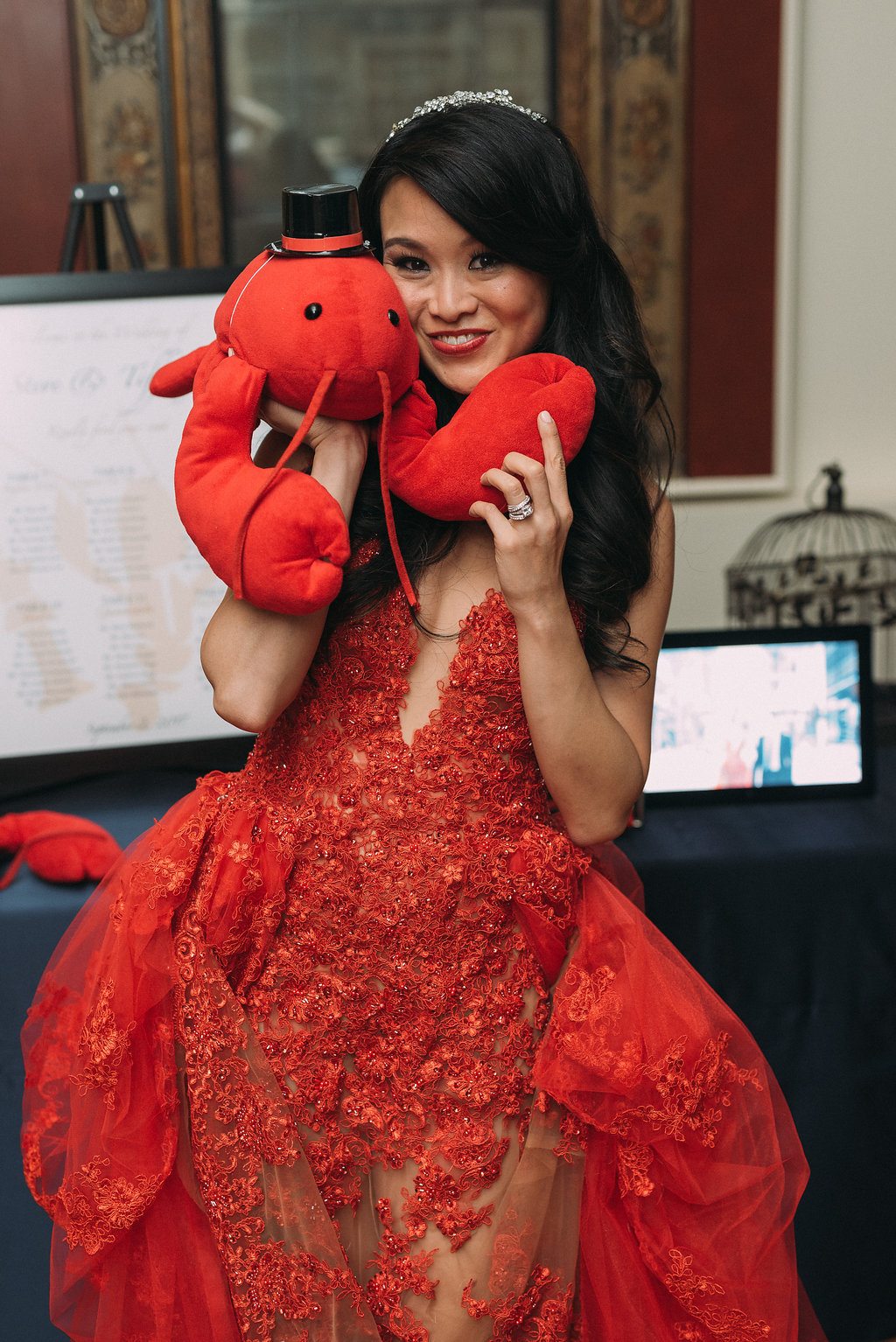 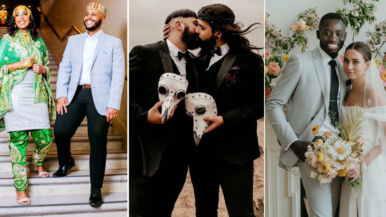 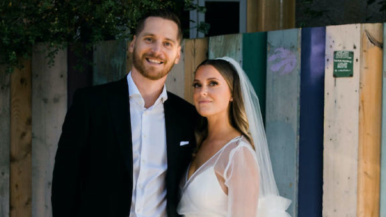 Real Weddings: Inside the ultimate city wedding at Paris Paris 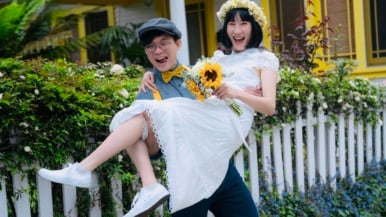 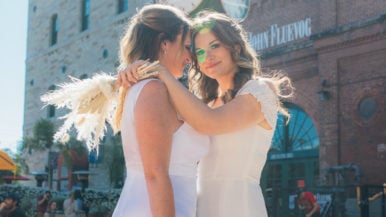 Real Weddings: Inside a DIY backyard celebration in East York 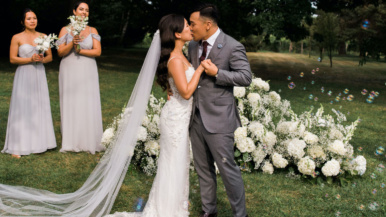 Real weddings: Inside a ceremony at a Niagara orchard

Real Weddings: Inside a zero-waste ceremony on a condo rooftop