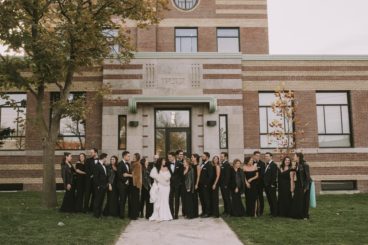 Inside the first-ever ceremony at the Symes, a restored art deco heritage building in the Junction

Carly and Jordan first met when they were 18. They stayed friends throughout their undergraduate studies at Western and McGill (respectively), lost touch when they both went off to law school, but reconnected at a mutual friend’s birthday party shortly after they graduated. “We’ve been together ever since,” says Jordan. “Since we already knew each other, there were no awkward first dates.” In the fall of 2016, Jordan surprised Carly with a proposal at their Seaton Village home. He turned off all the lights except for a movie lightbox at the front of the house that read, “Will you marry me?” He timed it so that their favourite song, “Home” by Edward Sharpe and the Magnetic Zeros, played as she walked in, and he picked up some of her favourite snacks from Bar Raval. “Pinchos are the key to Carly’s heart,” he says.

When they began planning the wedding, they decided they wanted a unique venue, somewhere none of their guests had been before. “I’d always envisioned a black tie wedding in an industrial space,” says Carly. Their wedding planner suggested the soon-to-be-reopened Symes, a heritage building in the Junction that used to be a garbage incinerator. They were sold. “I never dreamed of getting married in a former garbage incinerator,” says Carly, laughing. “But we immediately fell in love with the beauty, history and grandeur of the building.” Plus, they’d be the first couple ever married there.

They wanted the big day to be elegant, but not too formal. They decided to complement the the building’s 1930s art deco bones with a black-and-white colour scheme, punctuated with lots of lush greenery. “We wanted to elevate the rawness of the building with a variety of textures,” says Carly. Inside, there were crystal candle-holders, marble chargers, green box hedges and acrylic troughs. With more than 200 of their friends and family in attendance, they expected a rowdy dance floor. “Our Hora quickly escalated into a sweaty mosh pit of love, with a human pyramid, skipping rope and limbo,” says Jordan. Luckily, they had arranged for cold hand towels to be handed out afterwards. 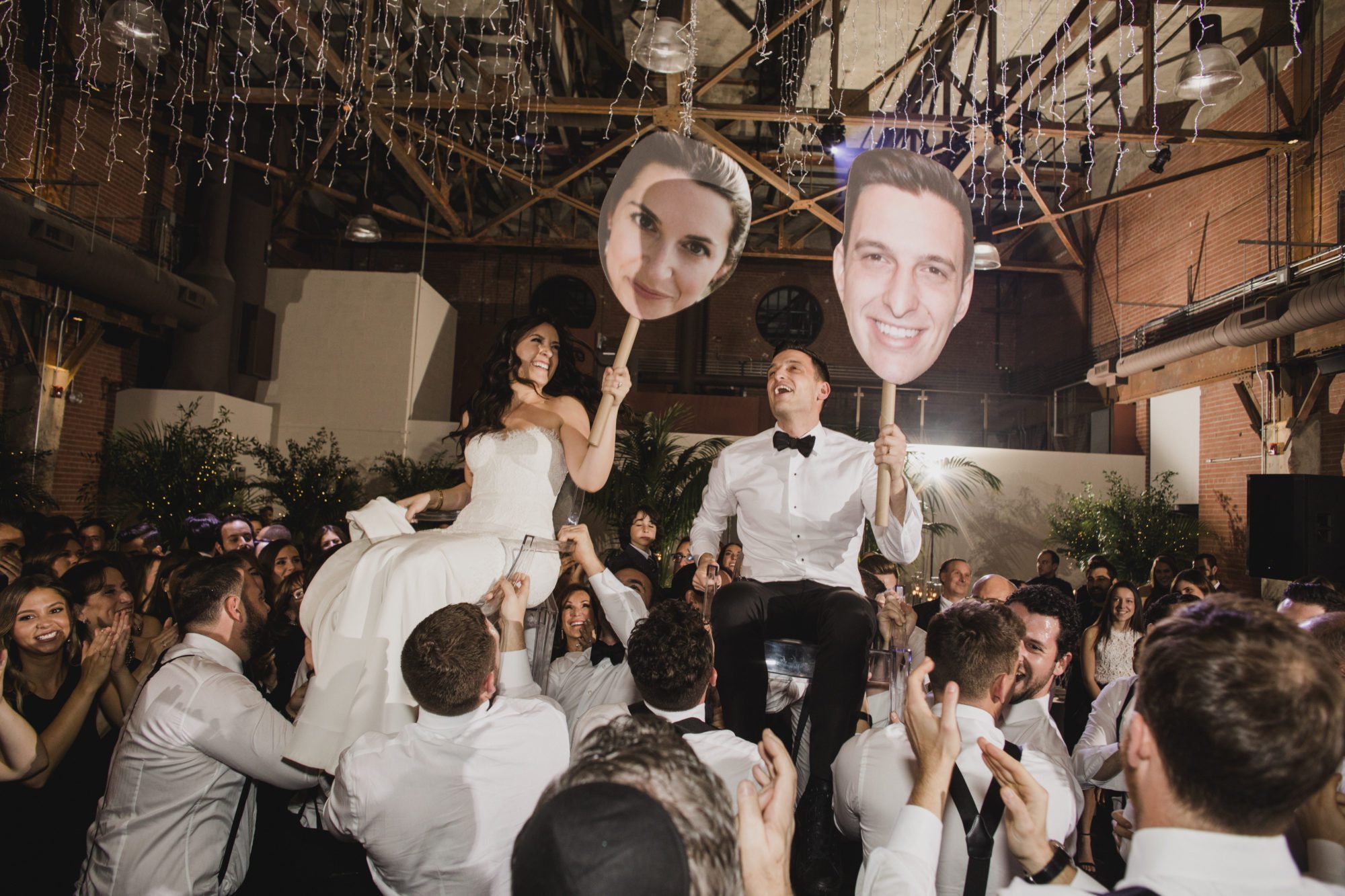 On the morning of their wedding, the couple got ready at their respective parents’ homes before stopping at Bar Raval for photos: 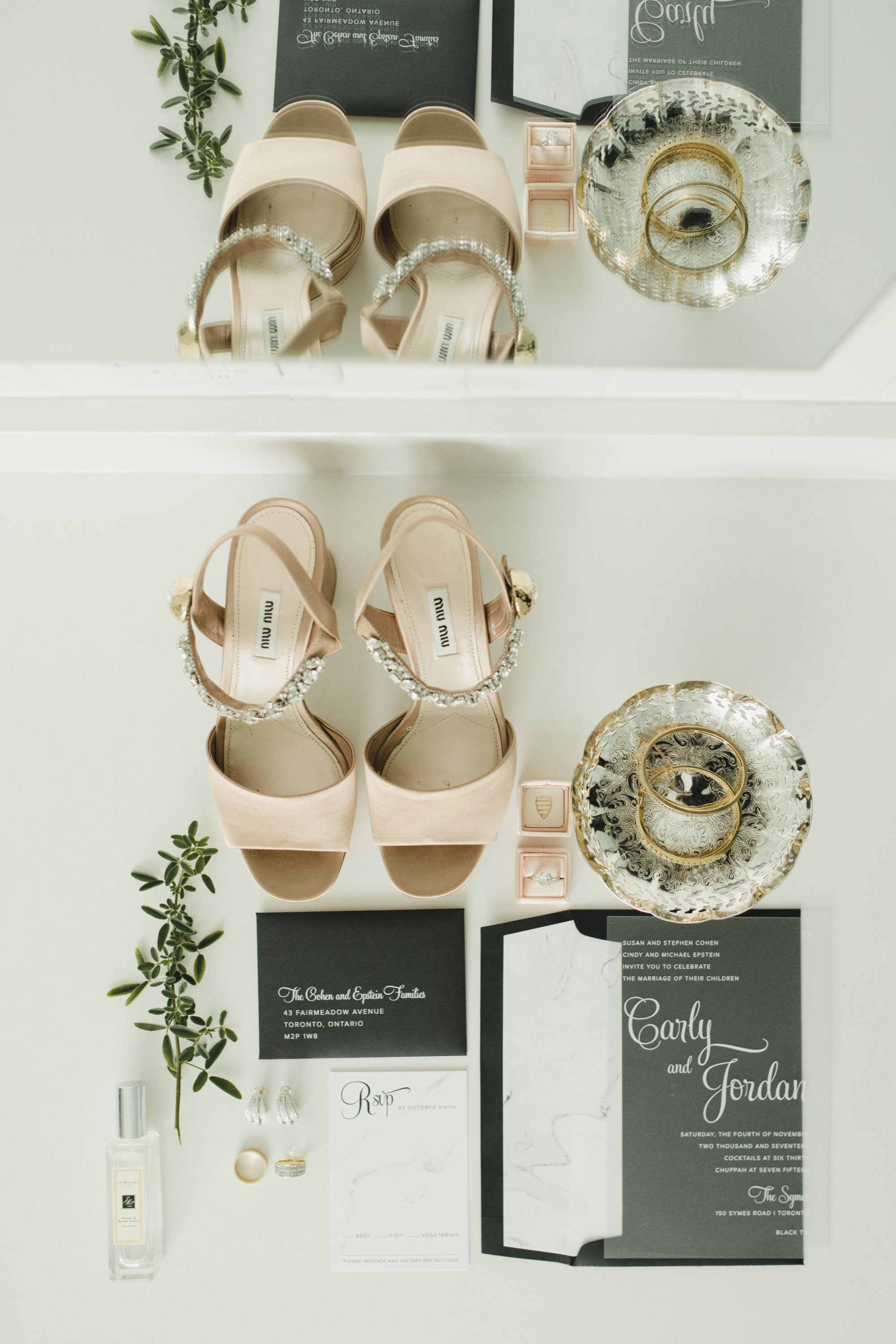 Carly had her hair and makeup done with her family and bridesmaids. “I loved spending some genuine time with them,” she says: 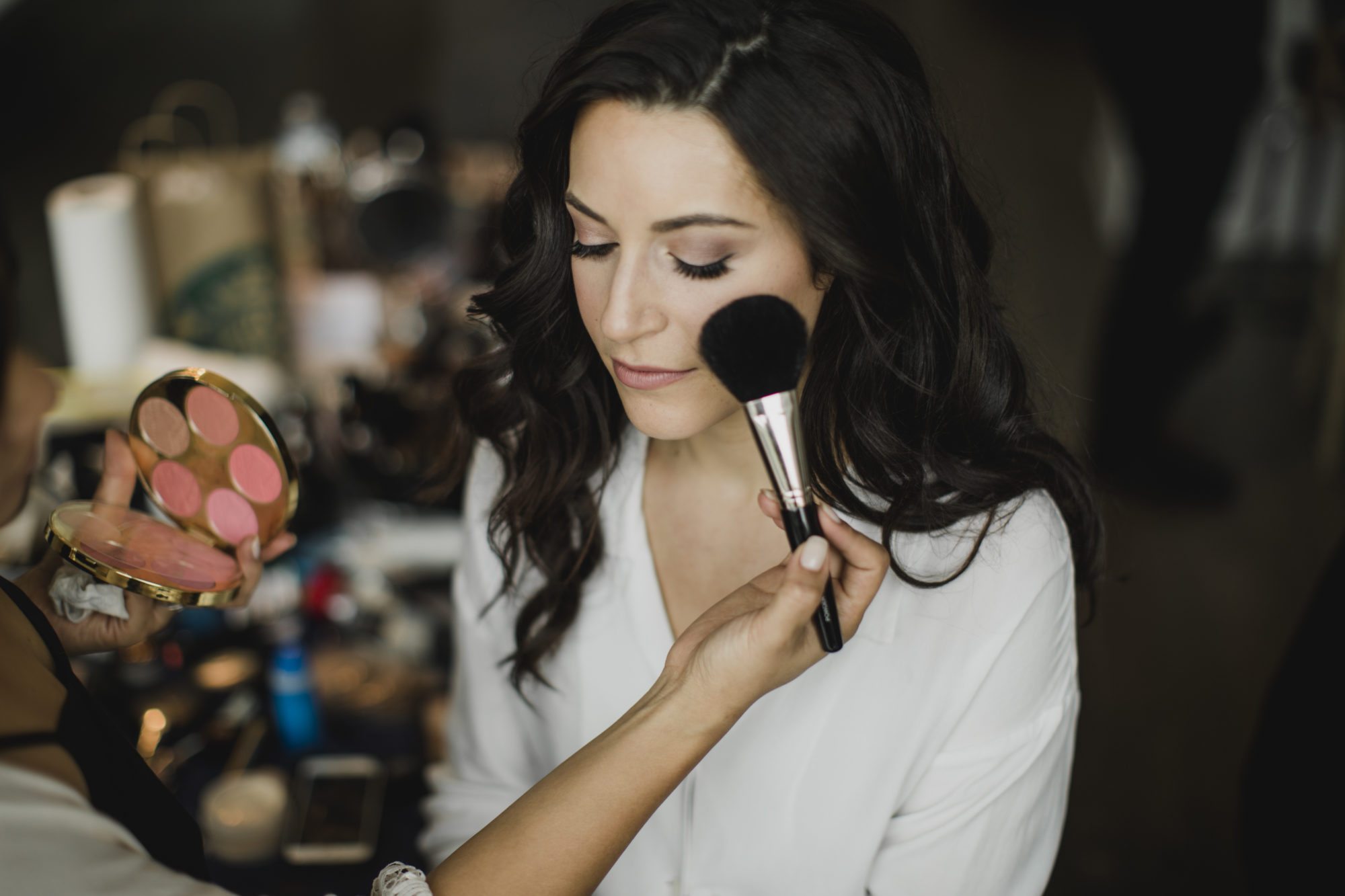 At the venue, they were hitched under an acrylic chuppah adorned with palm fronds, orchids and hydrangeas: 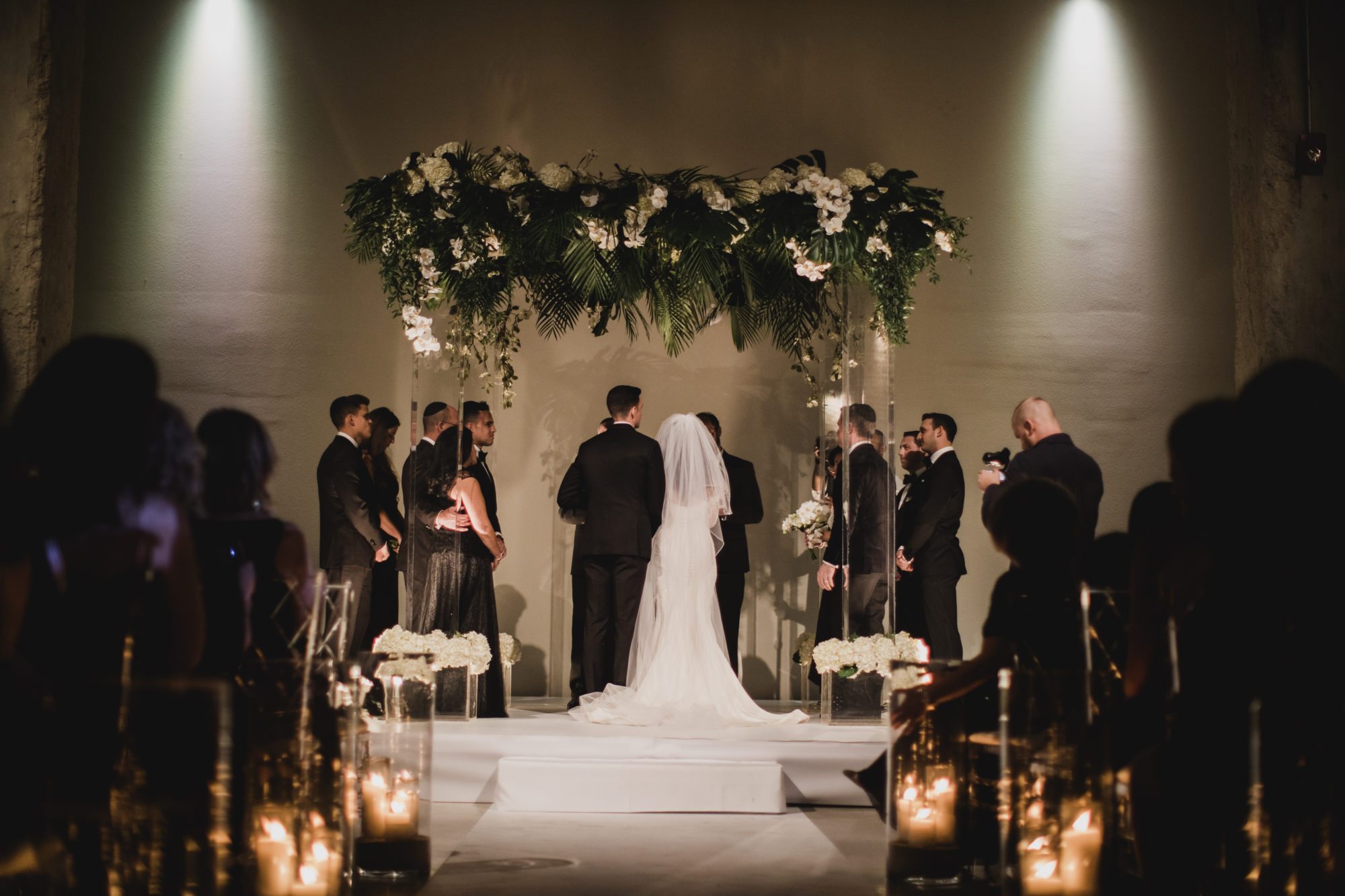 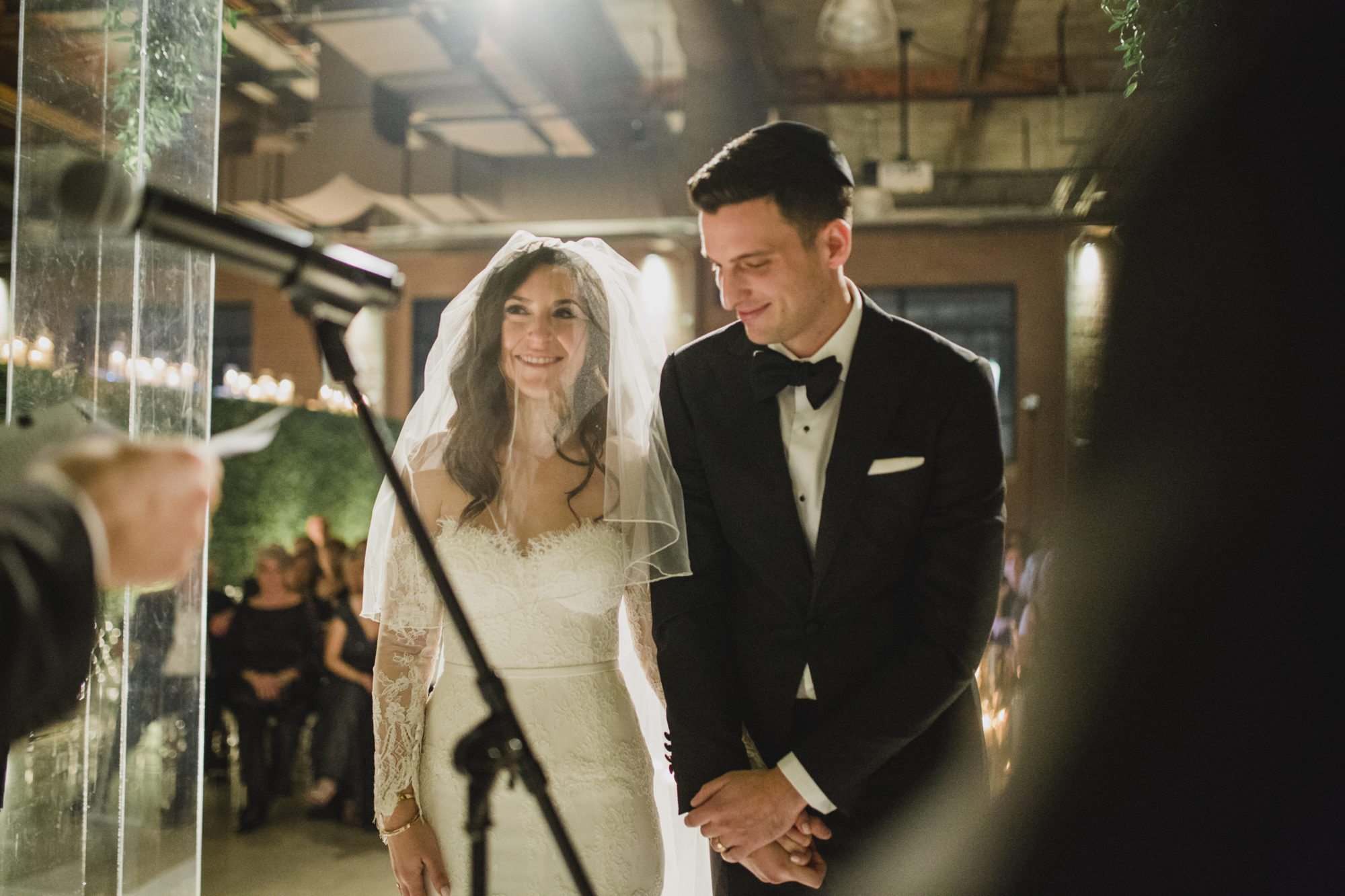 They loved the romantic vibe of the glittery fairy lights above the dance floor. “The venue was under construction up until weeks before the wedding, which added an element of surprise for both us and our guests,” says Jordan: 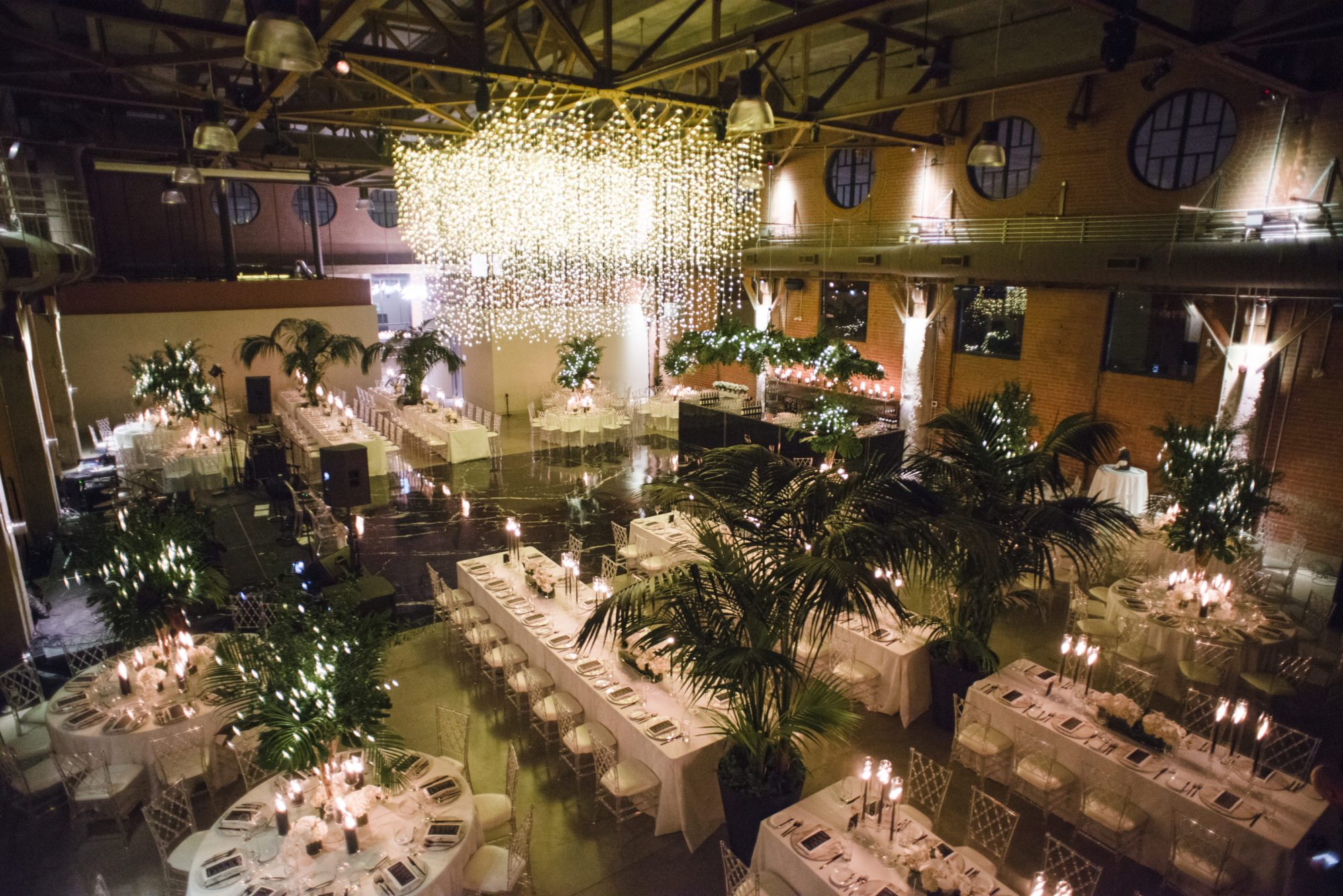 The tables were decorated with more white orchids and hydrangeas: 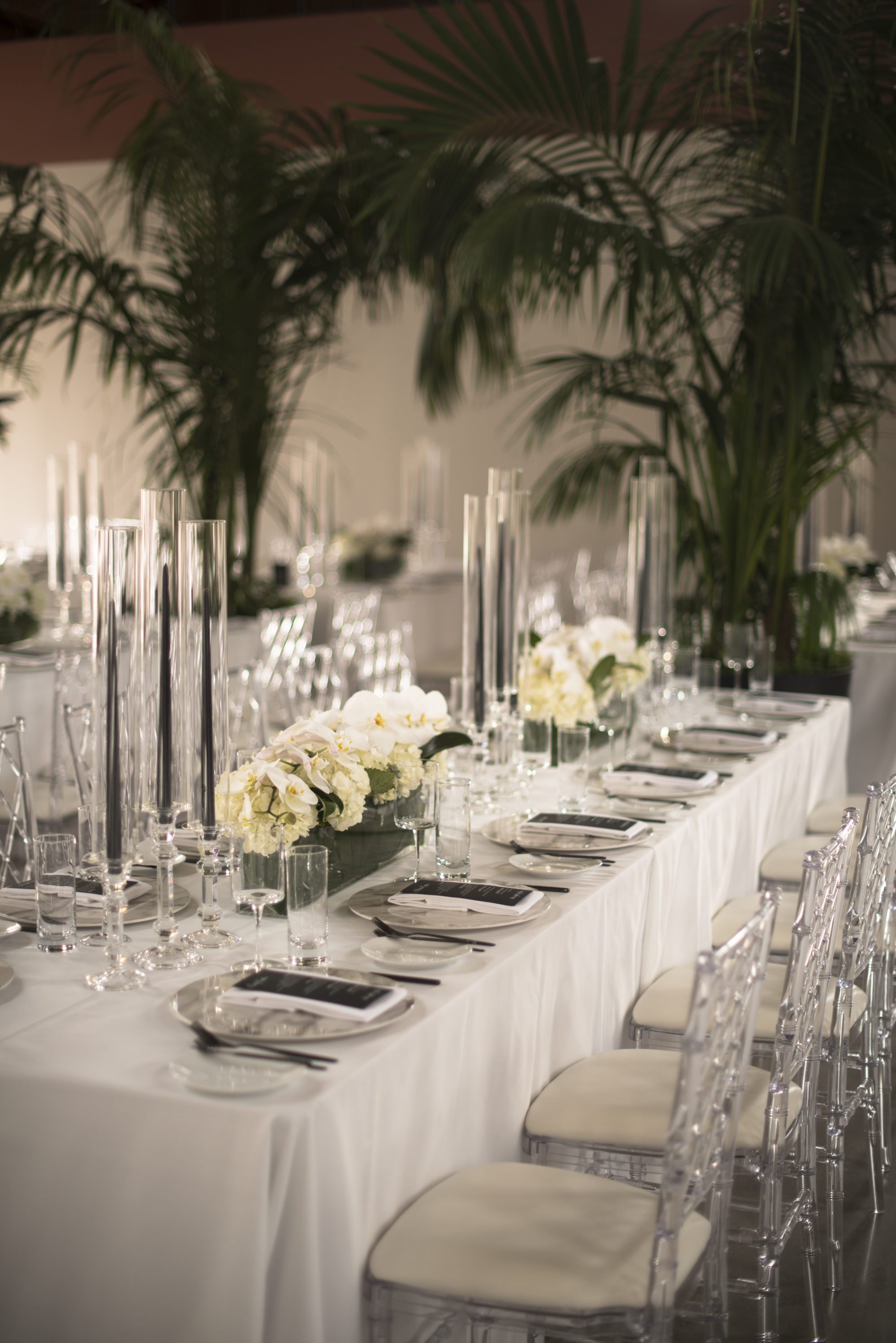 Their cake also stuck with the black-and-white theme: 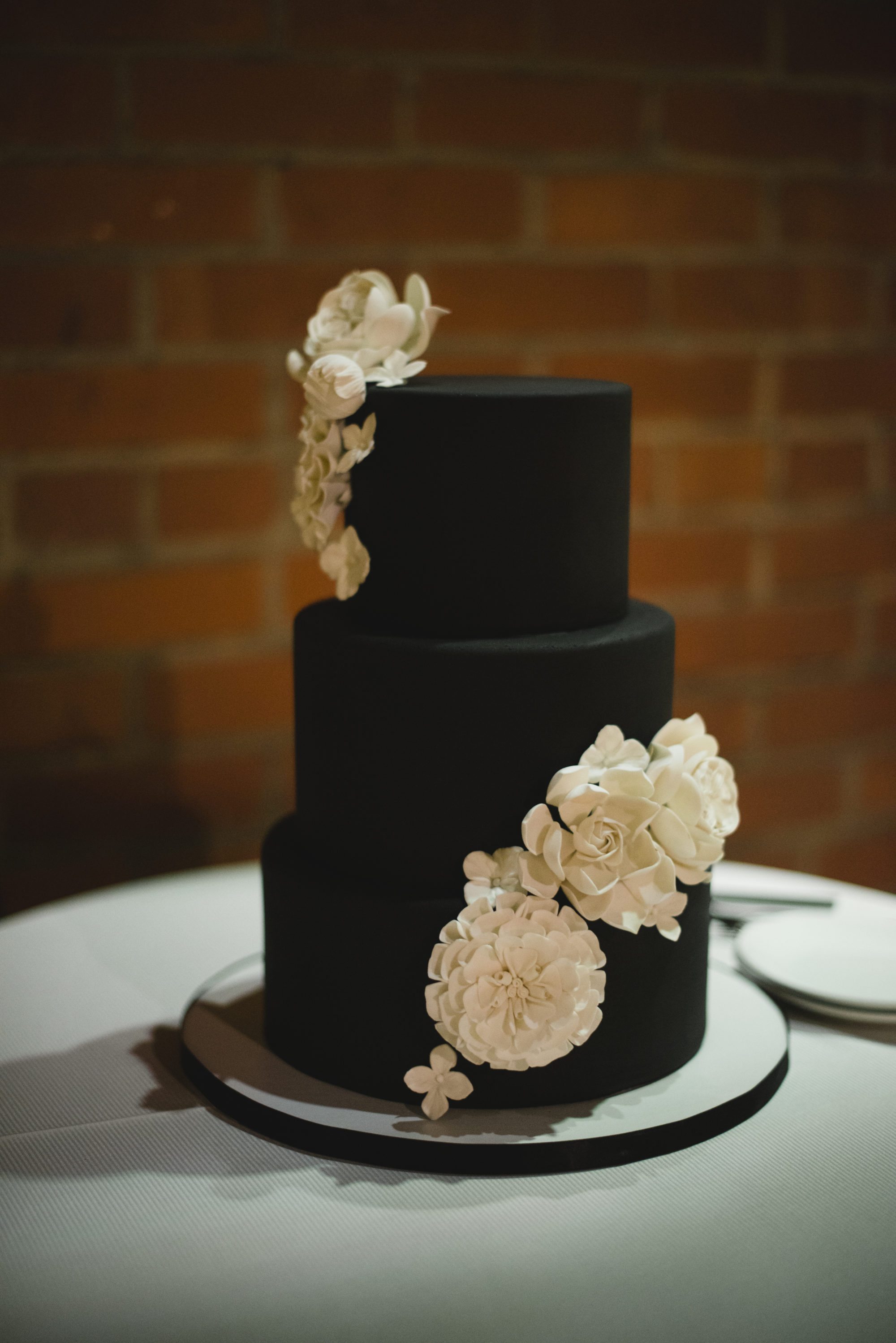 The Hora featured a human pyramid: 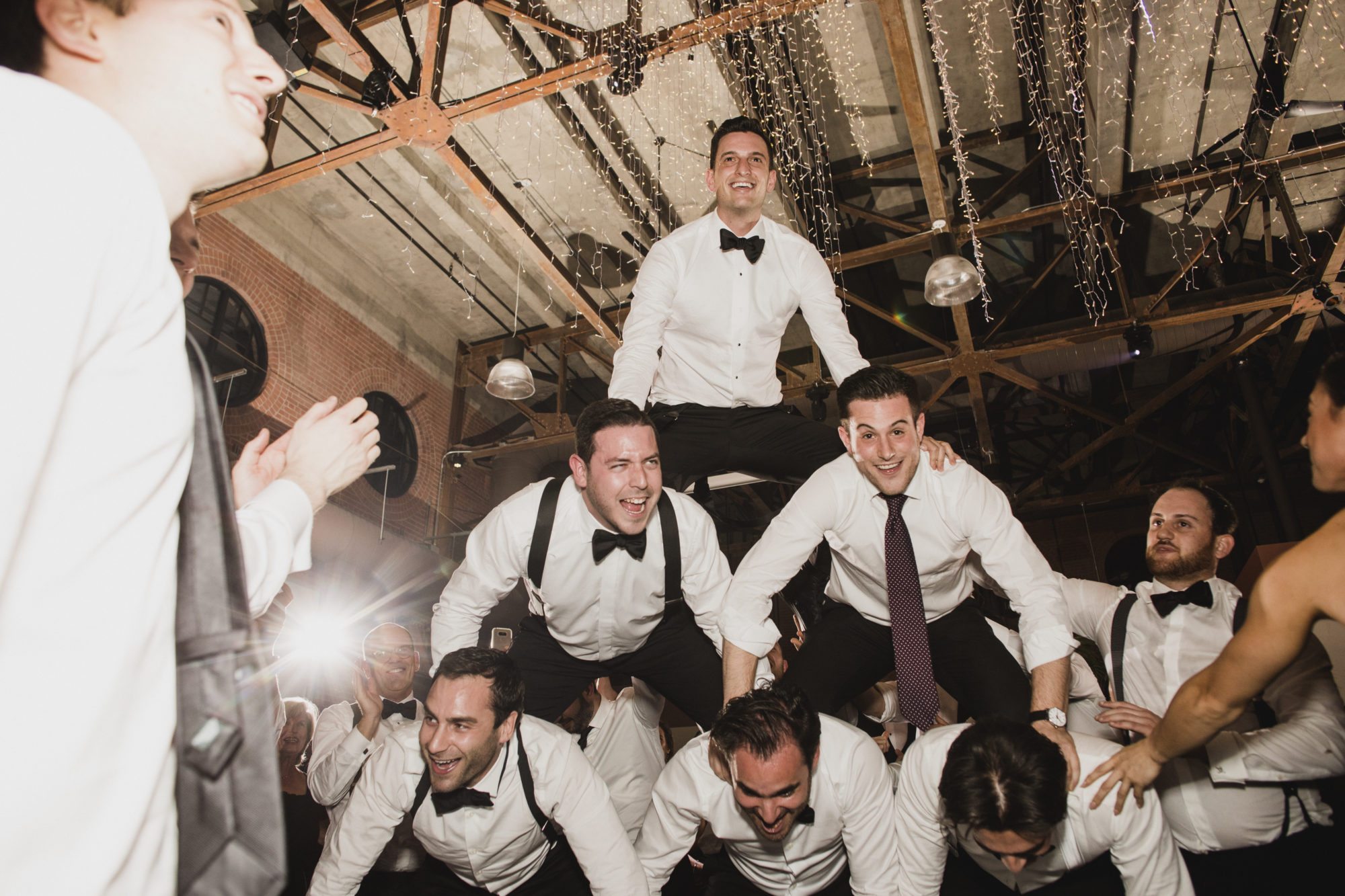 Their first dance was to “Home,” of course: 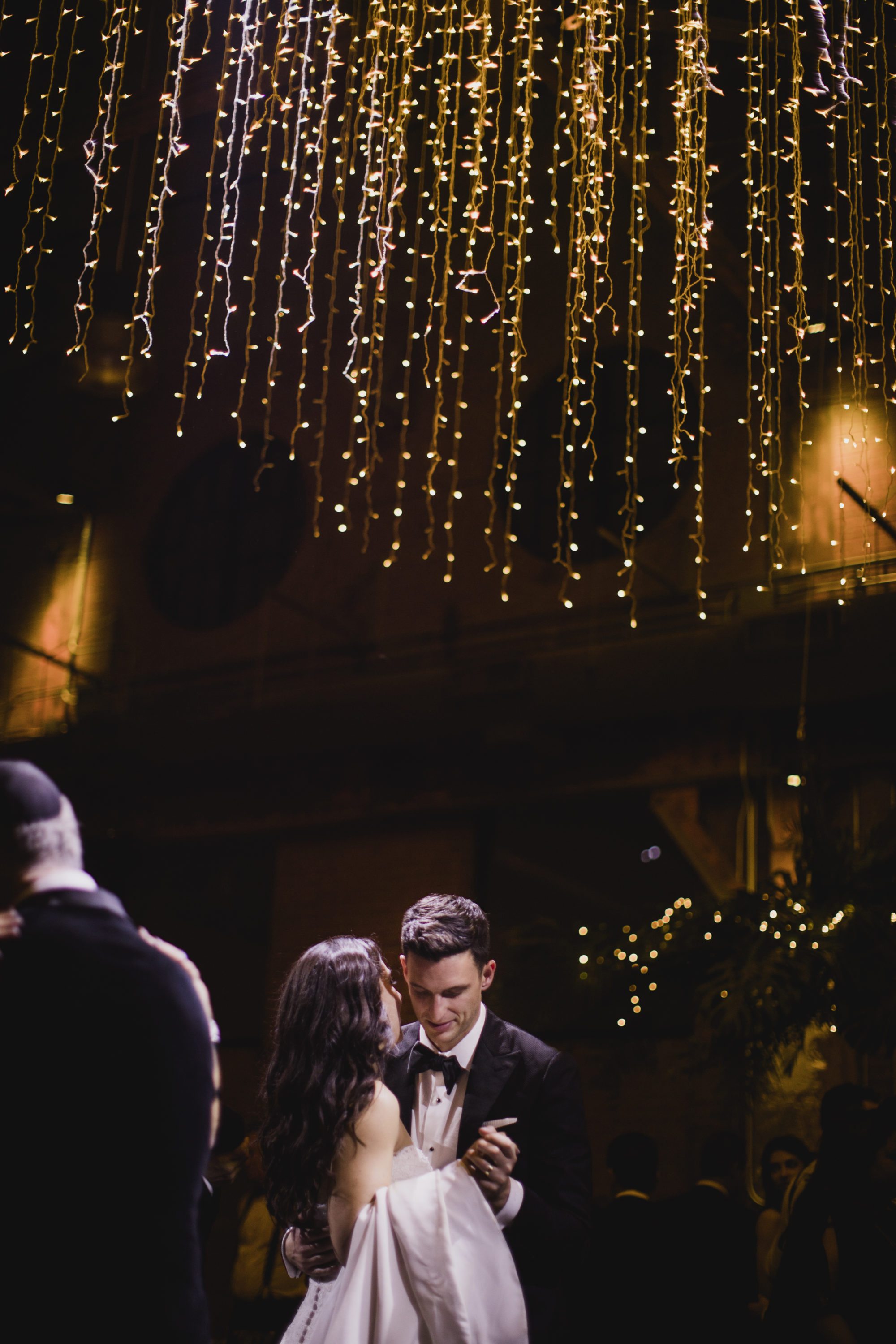 The couple didn’t leave the dance floor until 3 a.m. (the clocks turned back an hour for daylight savings that night, so they got an extra hour to celebrate). Afterwards, the party migrated to one of the groomsmen’s homes. “We didn’t want the night to end,” says Jordan: 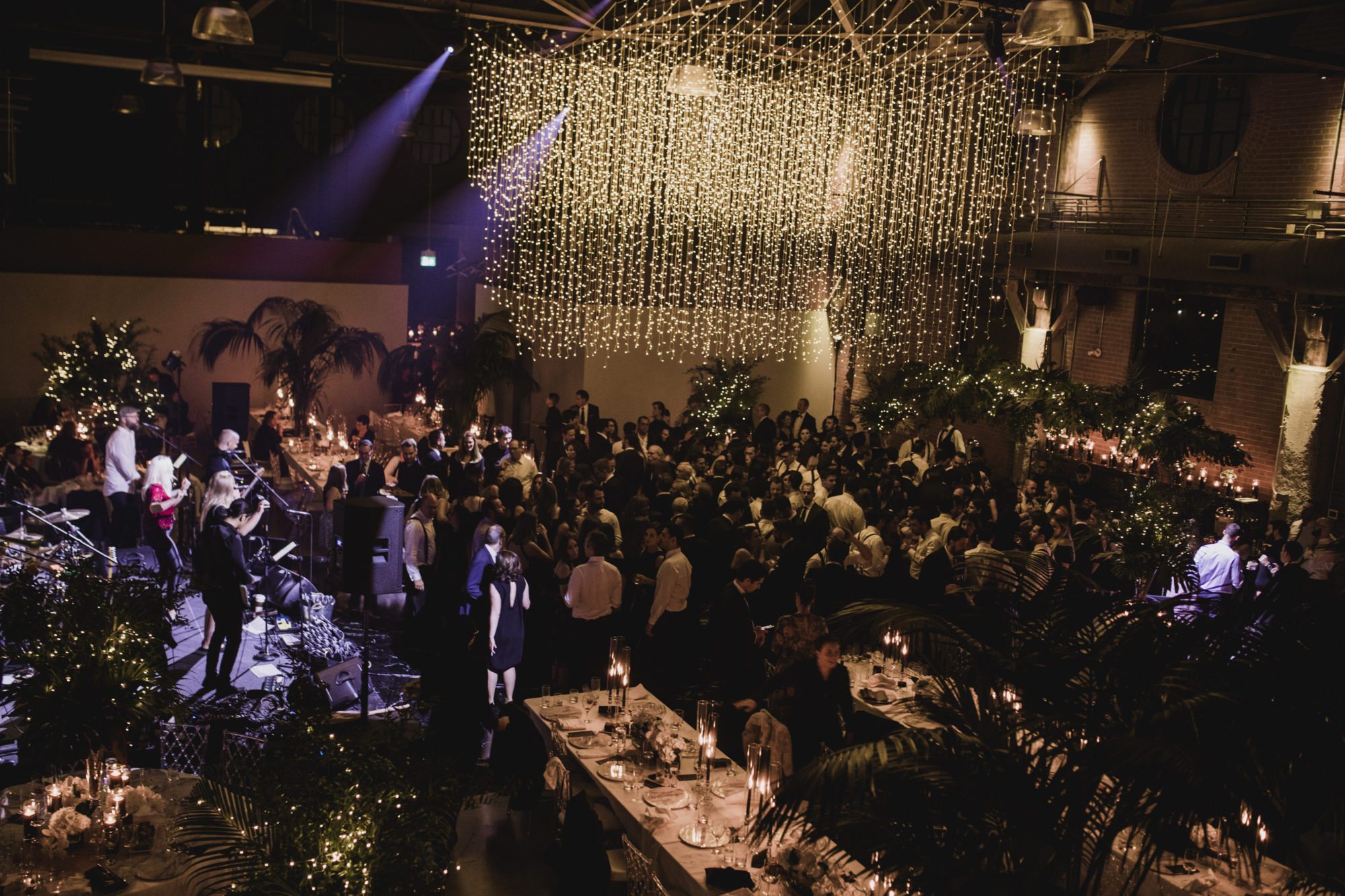 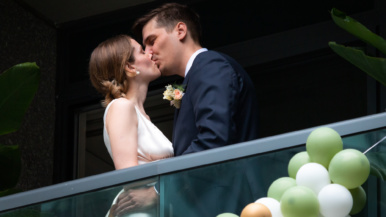 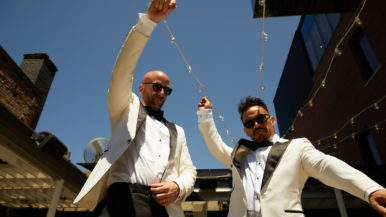