Real Weddings: Inside a dance-filled same-sex celebration at the Four Seasons

Real Weddings: Inside a dance-filled same-sex celebration at the Four Seasons 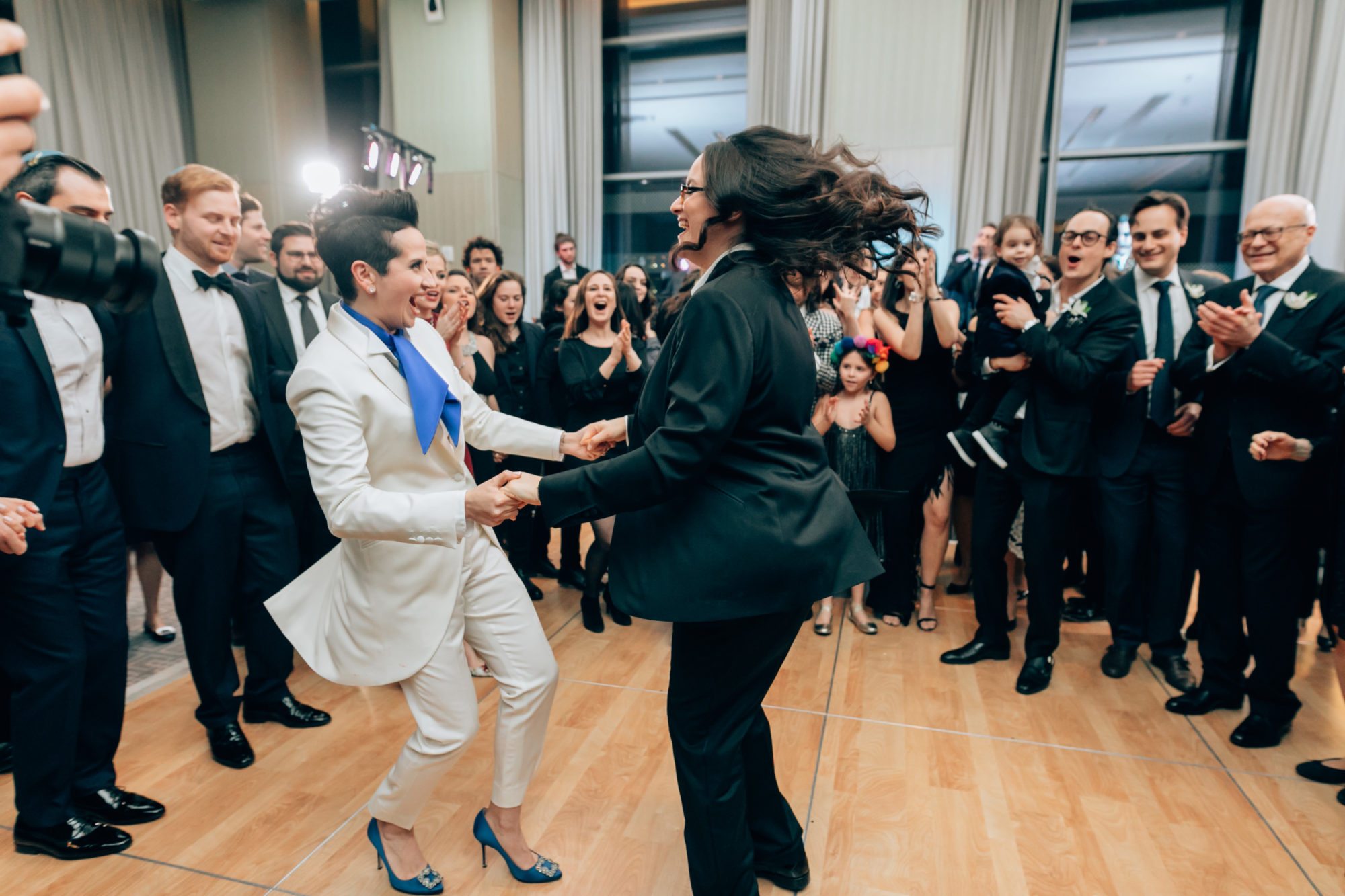 Melissa Lantsman, a communications director, and Lauren Rakowski, a litigator, met on OkCupid in 2013. “I sent her a witty one-liner, which she didn’t find funny,” says Lantsman. Rakowski thought she was cute so agreed to meet anyway, and was impressed with her cleverness in person. After, Lantsman wouldn’t leave her alone: “She kind of stalked me, but in a non-creepy way,” says Rakowski. Shortly after officially starting dating, they moved to Ottawa together for Lantsman’s job. A few years later, they returned to Toronto and settled down in Yorkville. “I could no longer be away from my Toronto Blue Jays,” says Lantsman.

Last August, Lantsman popped the question over a box of pizza. They often joked about getting hitched, so she got artist Dani Cooperman to customize a Buca pizza box (their favourite) to read, “Do you want to get married, but for real?” Unbeknownst to Lantsman, Rakowski had been planning a proposal of her own. “She beat me to it,” laughs Rakowski. After polishing off the pizza, they started planning their dream wedding. They knew they didn’t want to wait long, and settled on December—traditionally a wedding dead-zone, which meant they were able to book all of their preferred vendors and score the Four Seasons as a venue.

Neither of them cared for over-the-top touches. “We wanted it to be classy, but also down-to-earth and comfortable,” says Lantsman. Instead, they focused on incorporating Jewish traditions in a way that made sense to them and making sure everyone involved had a ton of fun. Though there was a formal sit-down dinner, guests were rarely in their seats, choosing instead to tear it up to ’90s tunes on the dance floor. “At the end of the night, we had vendors coming up to us and joking that they’re only doing gay weddings now,” says Rakowski. 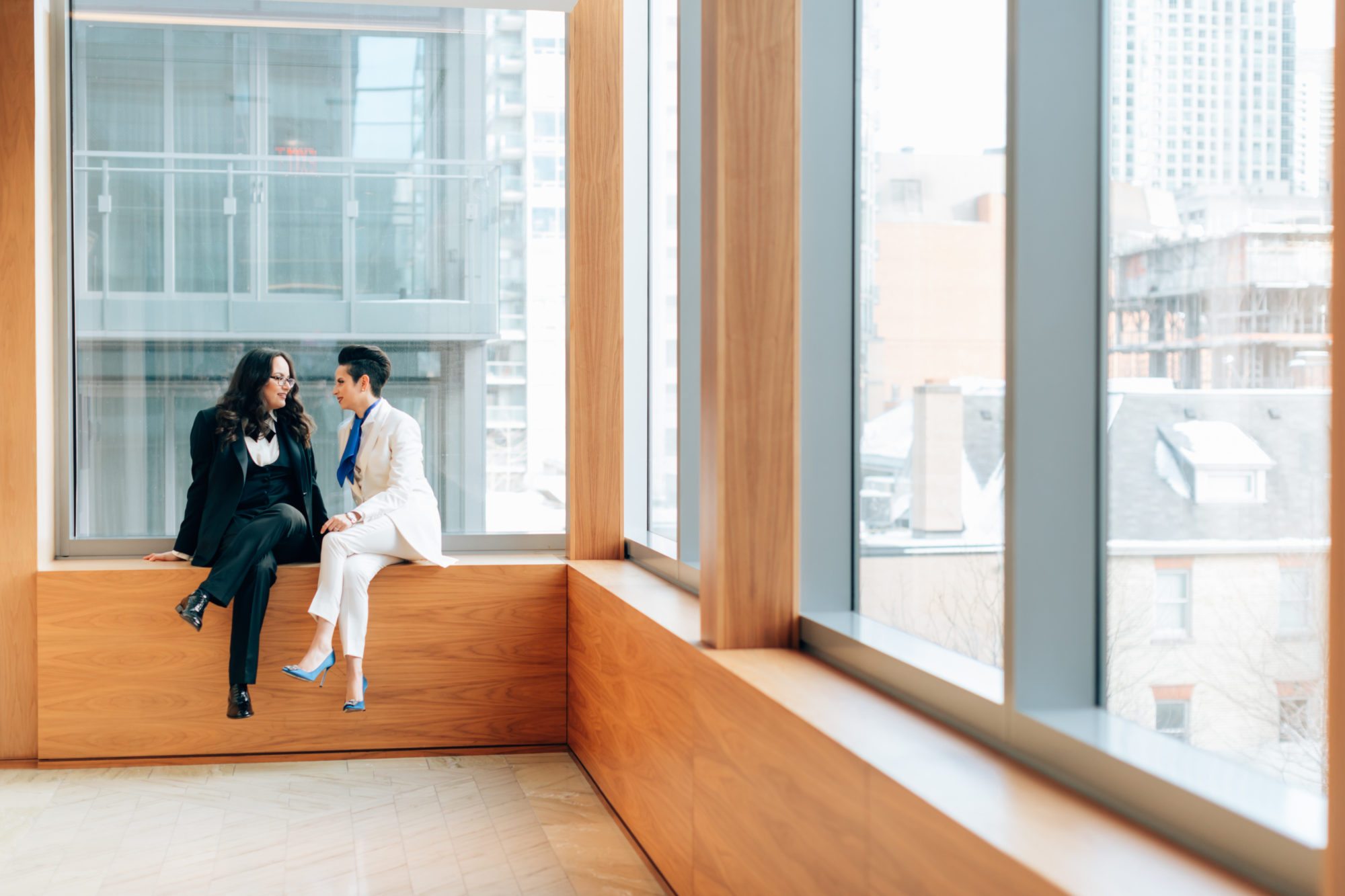 On the morning of their wedding, they got ready together in their condo and had their makeup done: 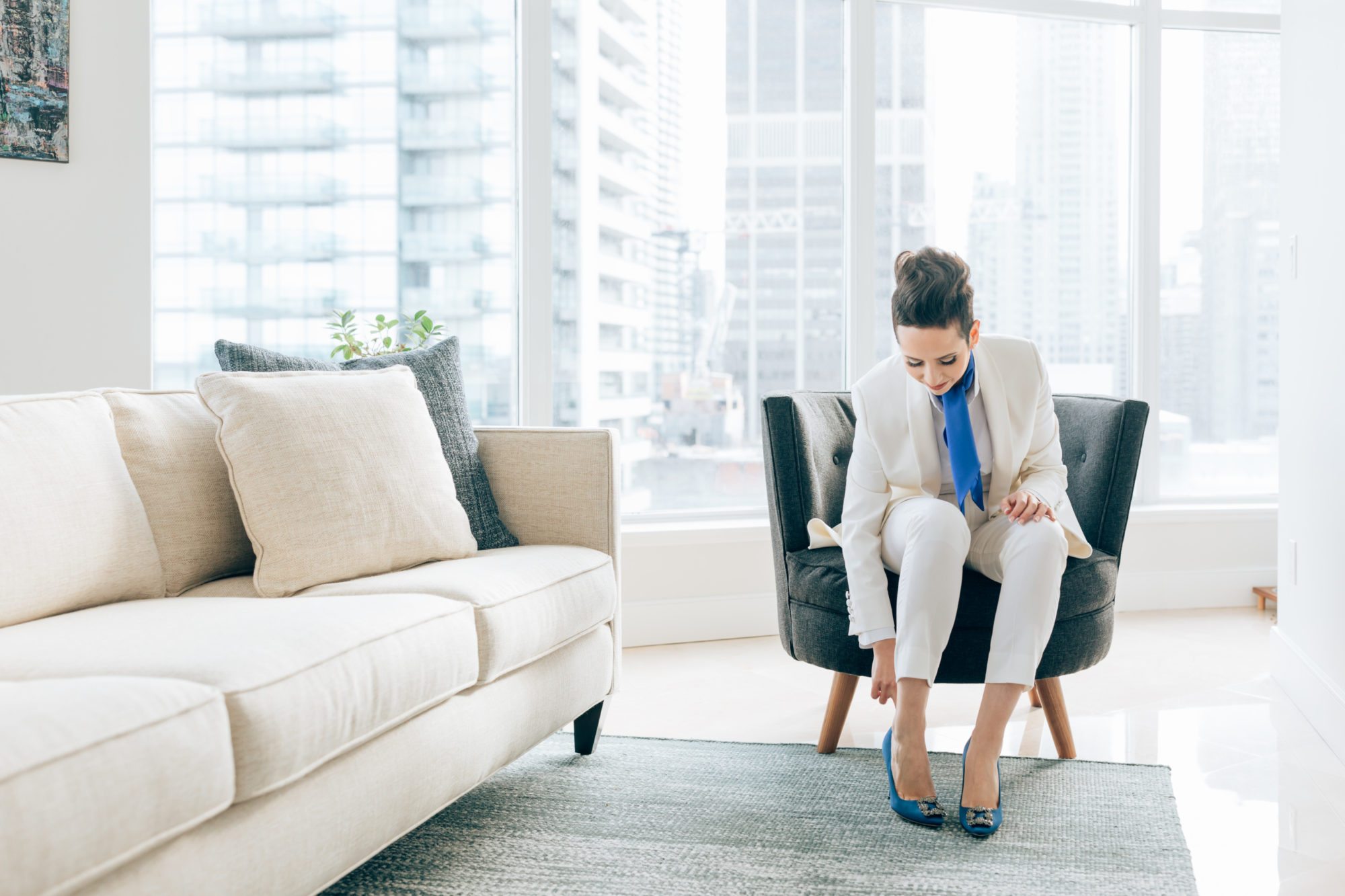 They each had bespoke tuxedos made—Lantsman in white, Rakowski in black. “Neither of us are the poufy wedding dress type,” says Lantsman: 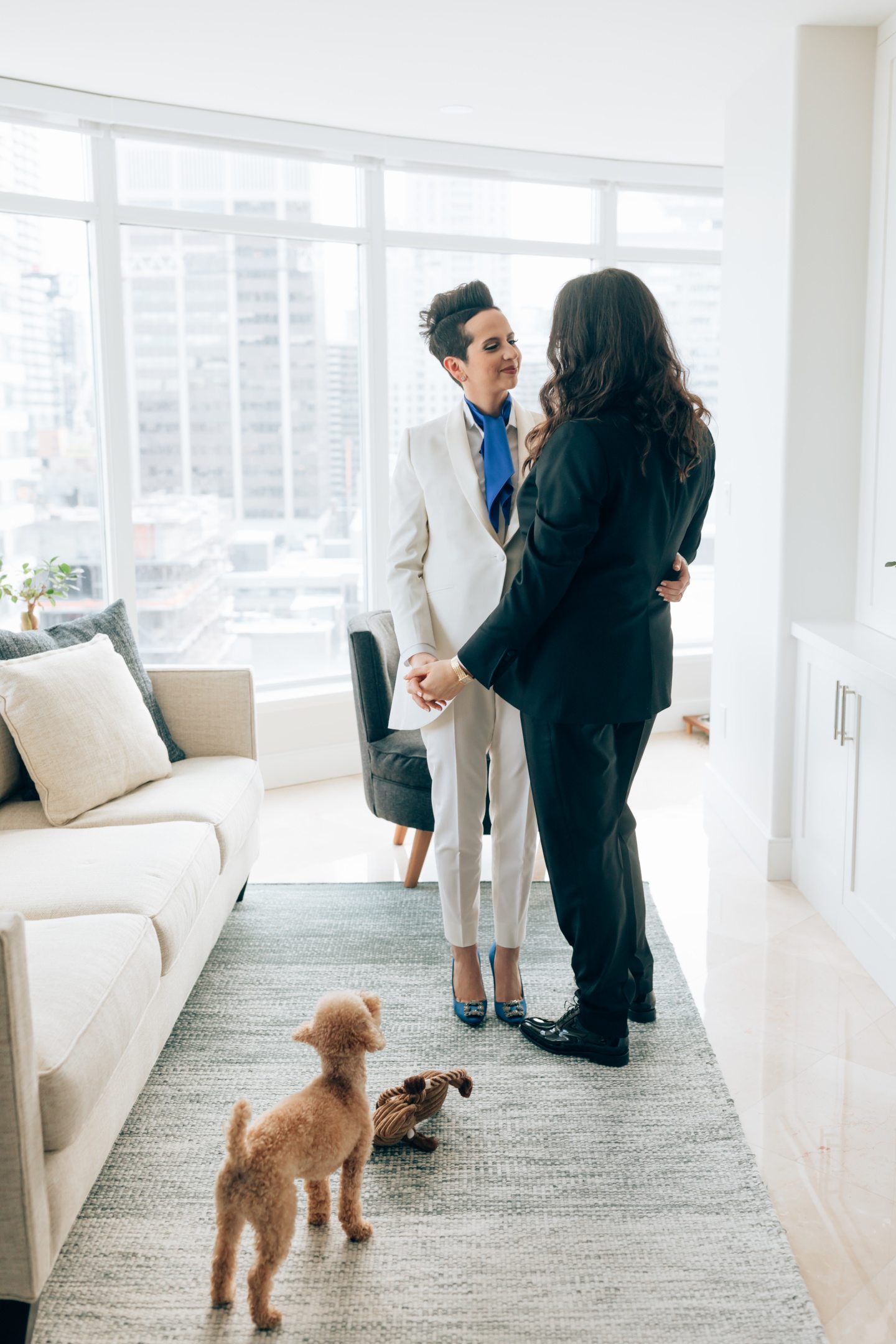 Their toy poodle, Winston, was a big part of their day (he even marched down the aisle as their “dog of honour”): 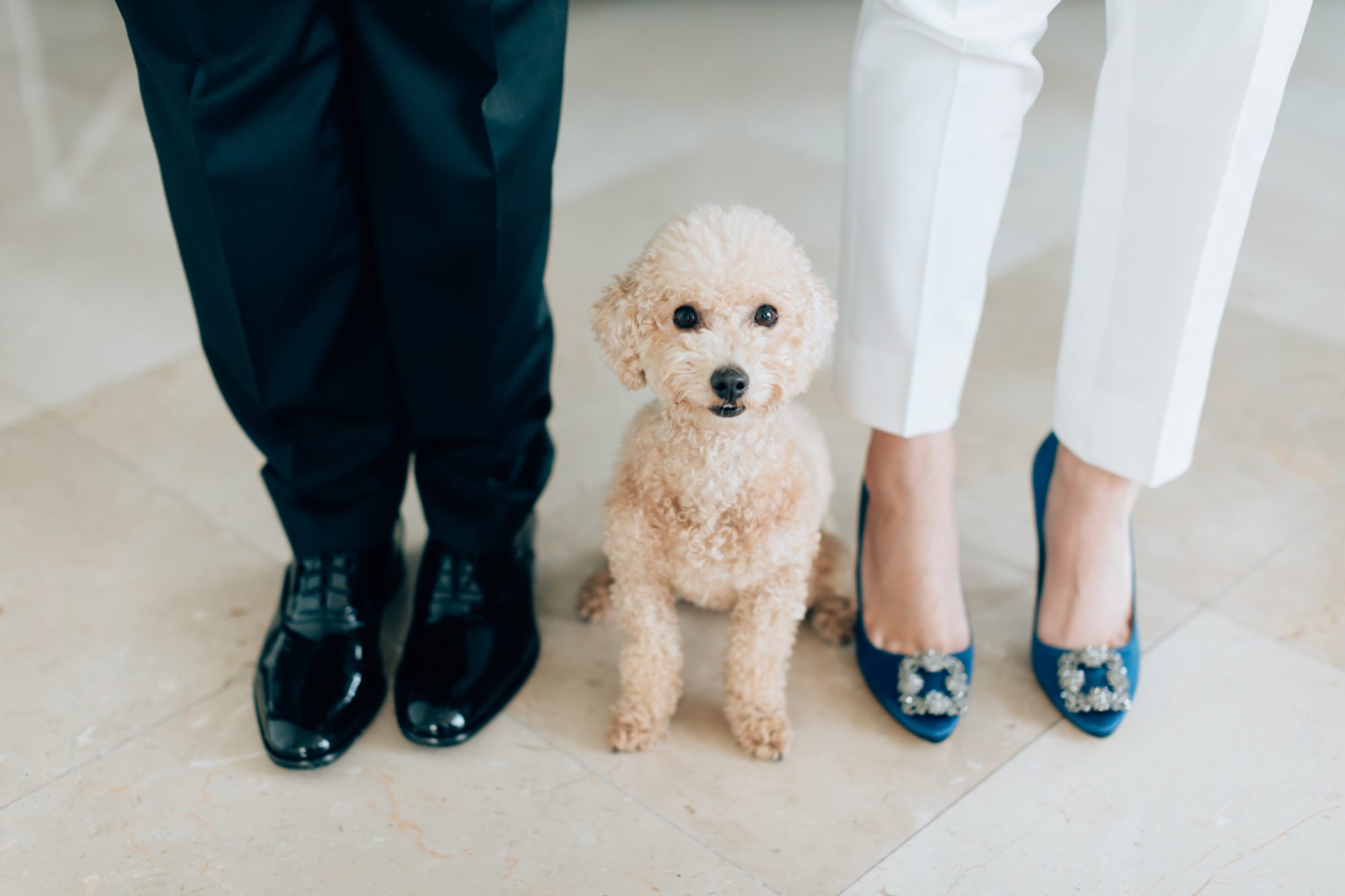 The duo chose the Four Seasons because it was steps away from their home, and they loved the cool and clean aesthetic. “Everything from the food to the service is really top of the line,” says Rakowski. Their wedding also happened to be the first time two women were married there. They held the ceremony in the Vinci Foyer under a birch chuppah adorned in rose bouquets and lots of greenery. The canopy was made of a rainbow tallit, or prayer shawl, that symbolized diversity and pride: 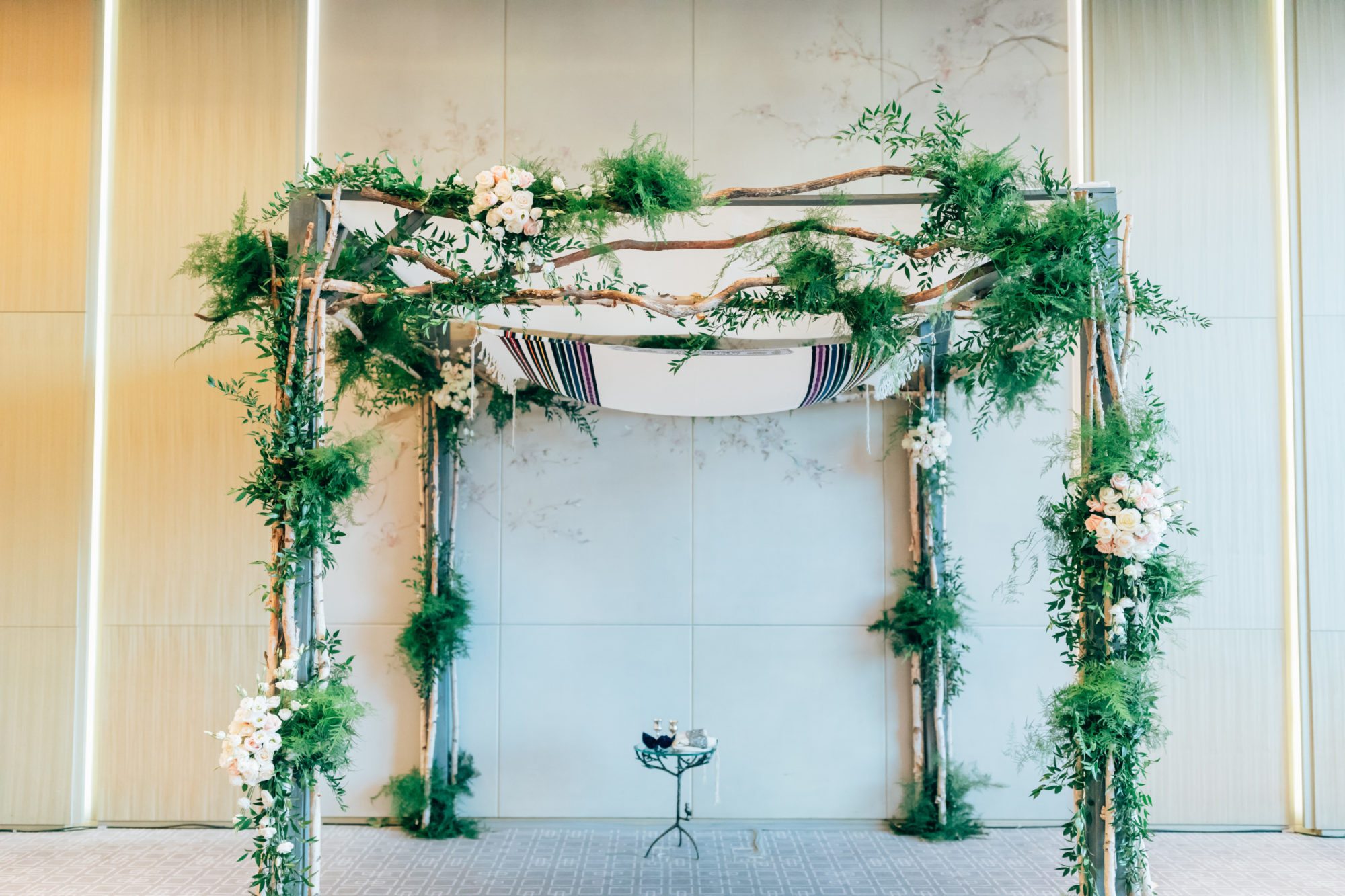 They also set up two aisles, so they could both walk down at the same time. During the ceremony, they were wrapped in another tallit that belonged Rakowski’s late grandfather: 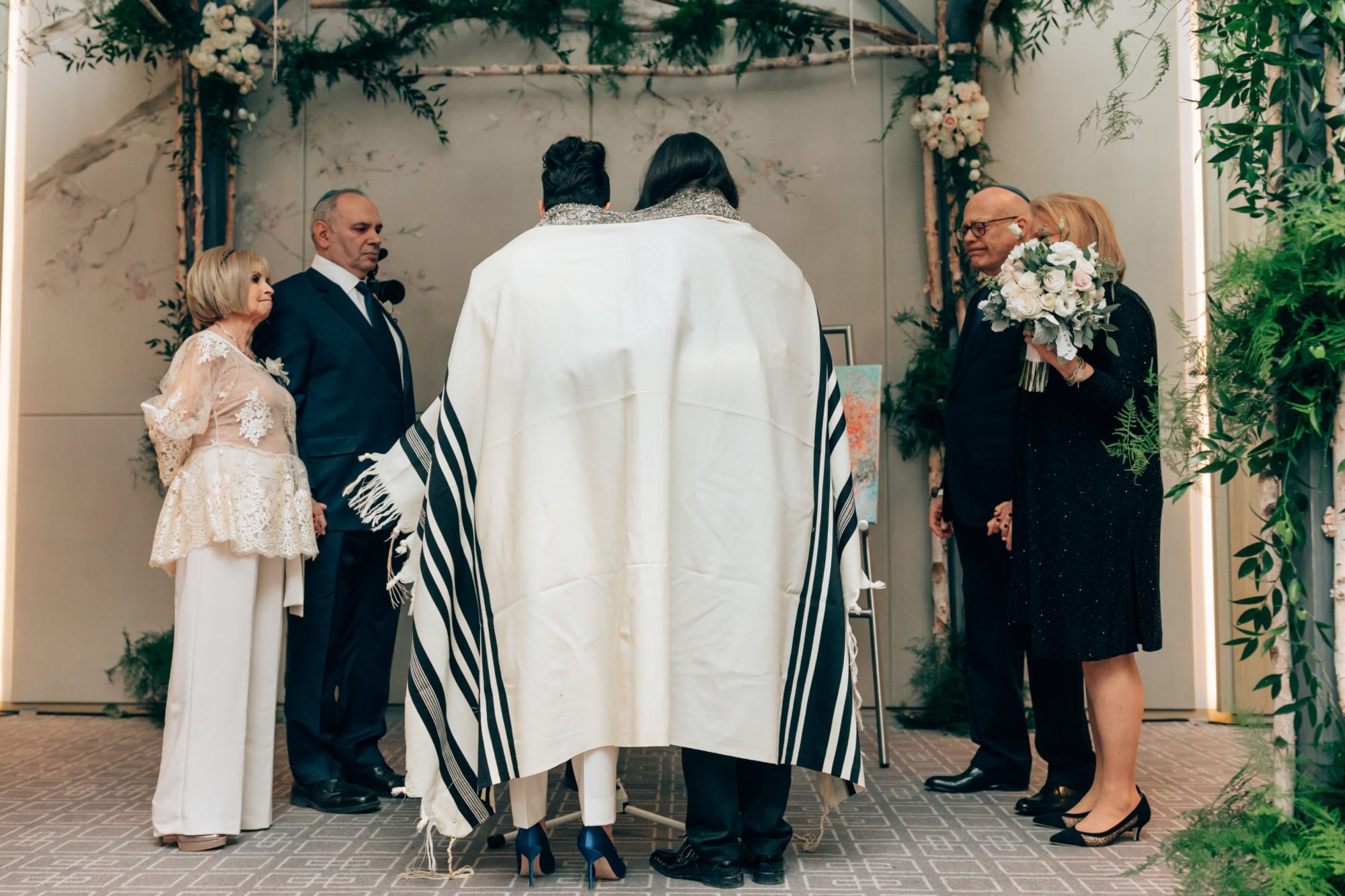 They decided to both break glasses: 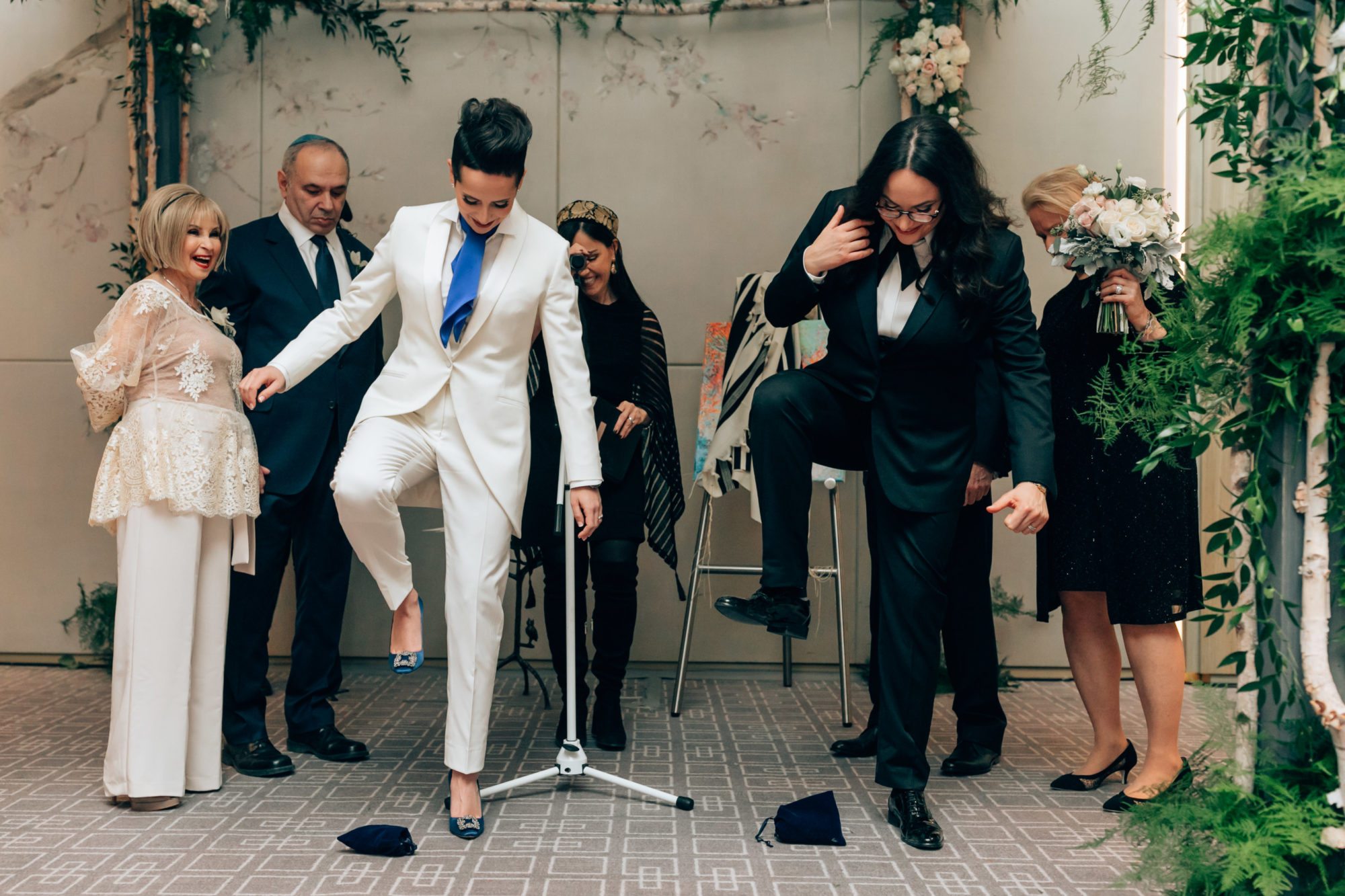 After the ceremony, they kicked off the dancing with a rowdy Hora: 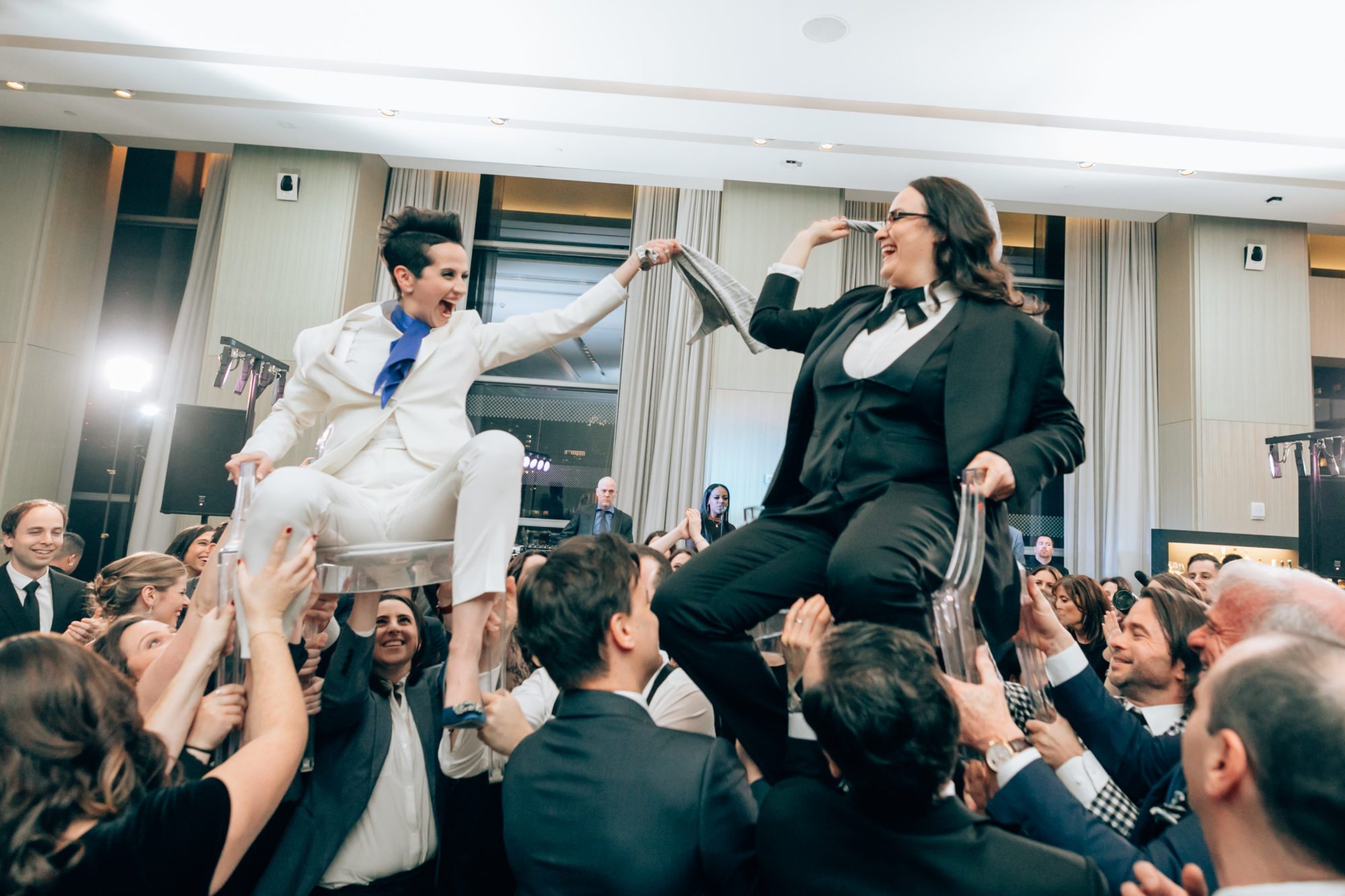 They were both the last children in their families to get married, so they did a celebratory dance, called the Mezinka, around their parents with their siblings and siblings-in-law: 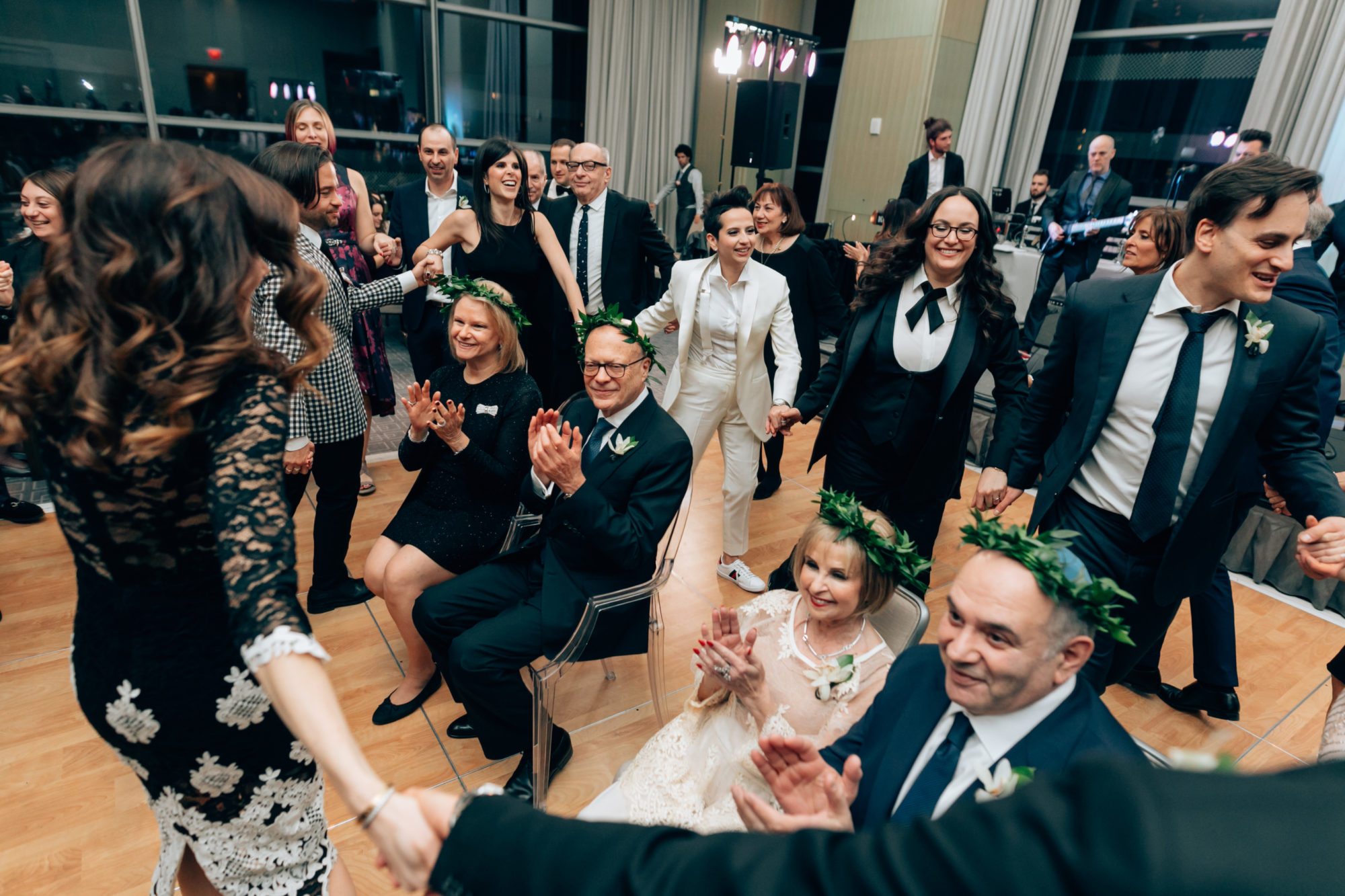 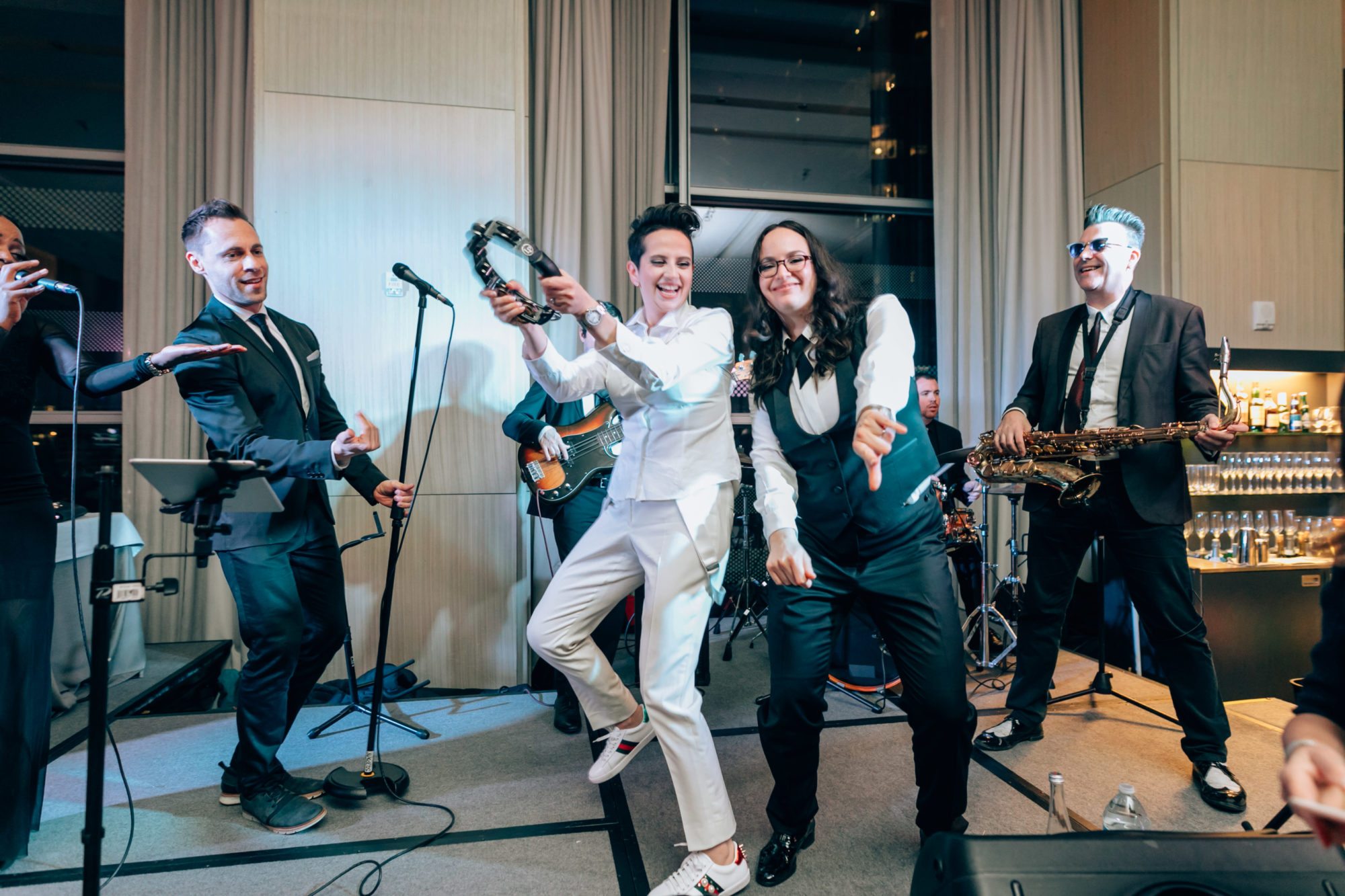 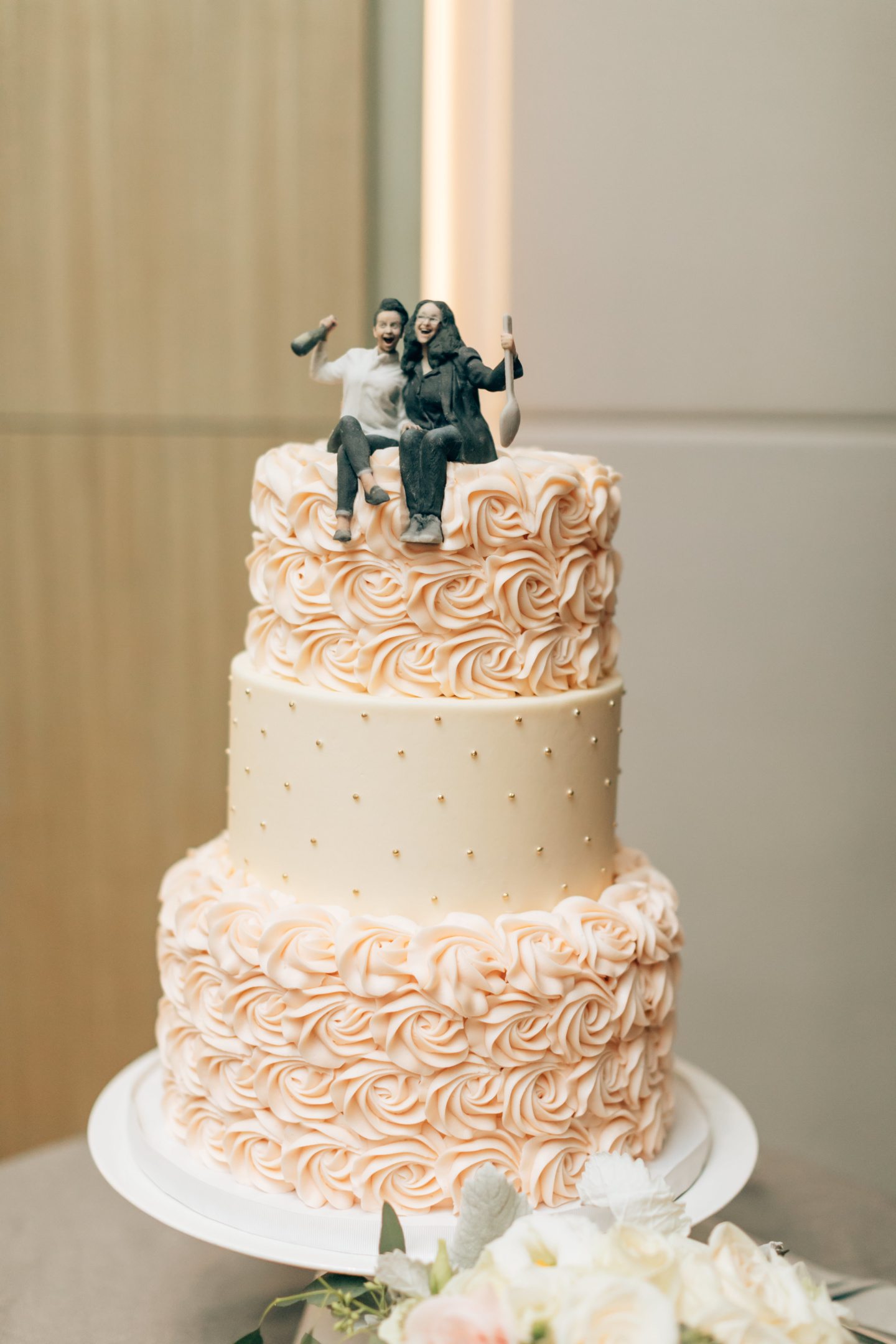