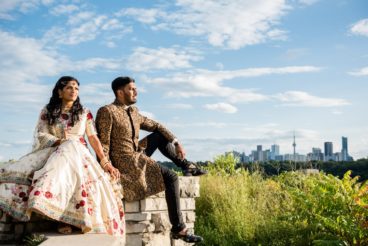 Inside a contemporary Indian extravaganza at the Brick Works

Reema Patel and Sumantra Datta-Ray had a perfect first date at The Oxley in 2014. Datta-Ray was impressed with her punctuality, while Patel was enamoured by his quick wit. Two years later, he proposed on the rooftop of their Richmond and Spadina townhouse, with a commissioned graffiti piece from local artist Victor Fraser, platters of homemade snacks and a custom emerald-and-diamond ring he designed, based off an Art Deco band that had caught her eye earlier that year. The first thing they did was call their families, both of whom immediately supplied a few timing options. “We had our wedding date locked down 45 minutes after getting engaged,” says Datta-Ray with a laugh. That night, they celebrated with Patel’s parents at a showing of Lion at TIFF.

They anticipated a guest list of 400 (“an intimate wedding by Indian standards,” says Datta-Ray), but wanted a downtown venue, so landed on the Evergreen Brick Works. The couple wanted their wedding to be classic and traditionally Indian, rather than glitzy and Bollywood-inspired. They planned it all themselves, coordinating every last detail down to the antique teak chairs and serving spoons. Datta-Ray even grew 800 marigolds on their roof to use as decorations. 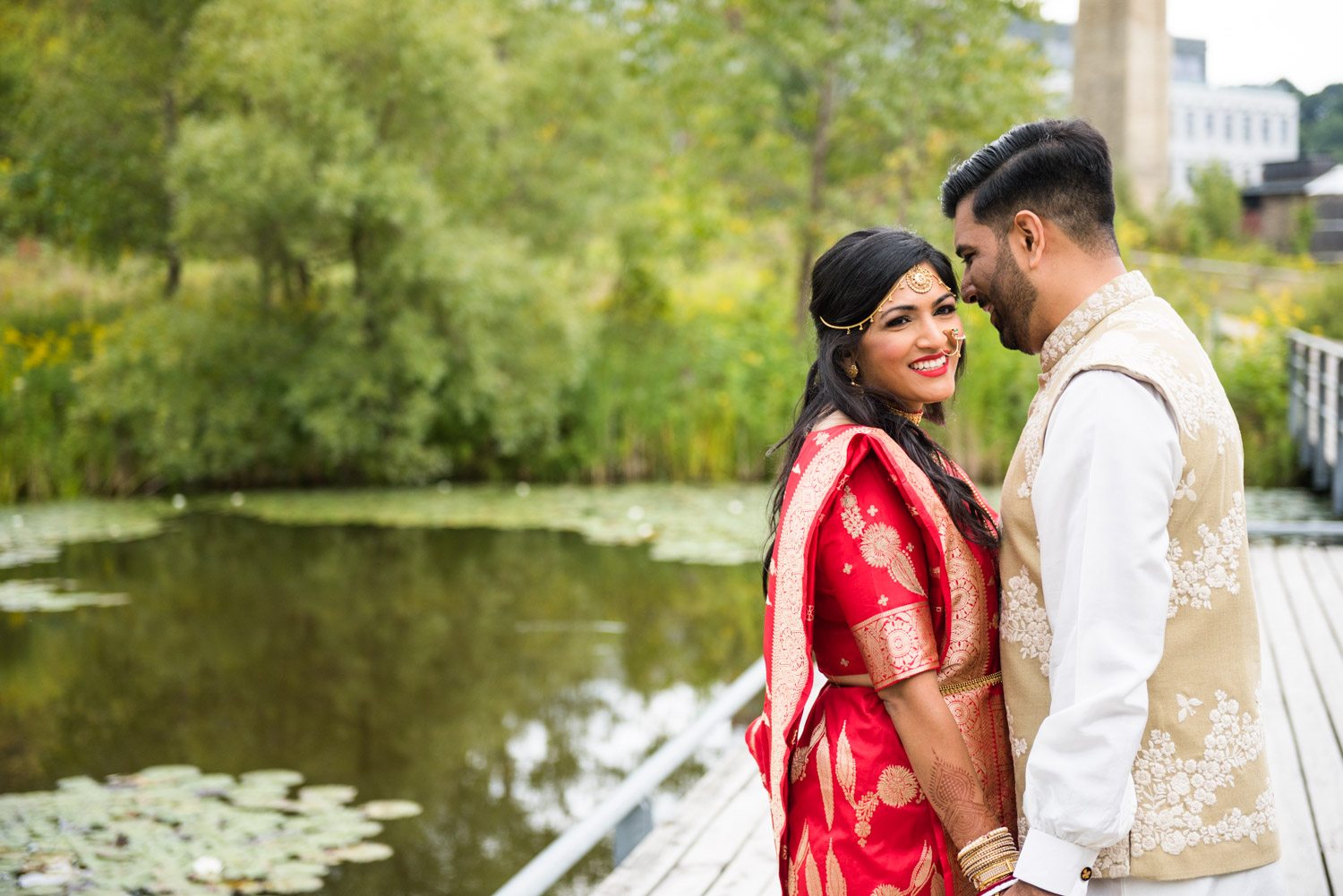 The couple had eight separate parties the week before their wedding, so they were pretty exhausted by the time the big day rolled around. Patel got to the venue at 7 a.m. to start getting ready while Datta-Ray harvested the marigolds—a challenge since it had rained the night before. Earlier that week, Patel spent four hours getting her hands and feet tattooed with intricate henna designs: 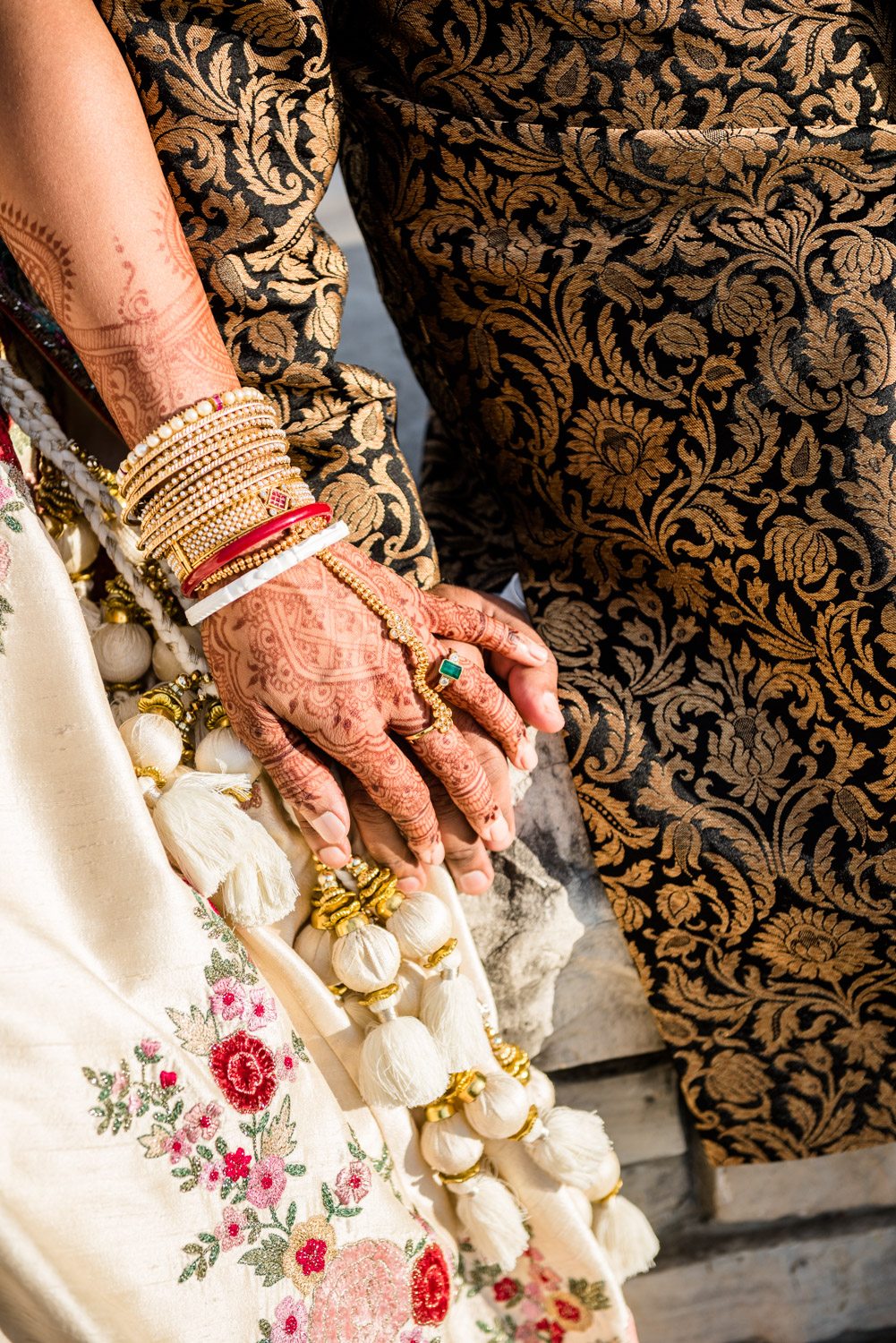 They loved the natural environment of the venue and wanted to maintain its integrity. “Nature is woven into every architectural detail,” says Patel. They decorated the space with roses and bougainvillea: 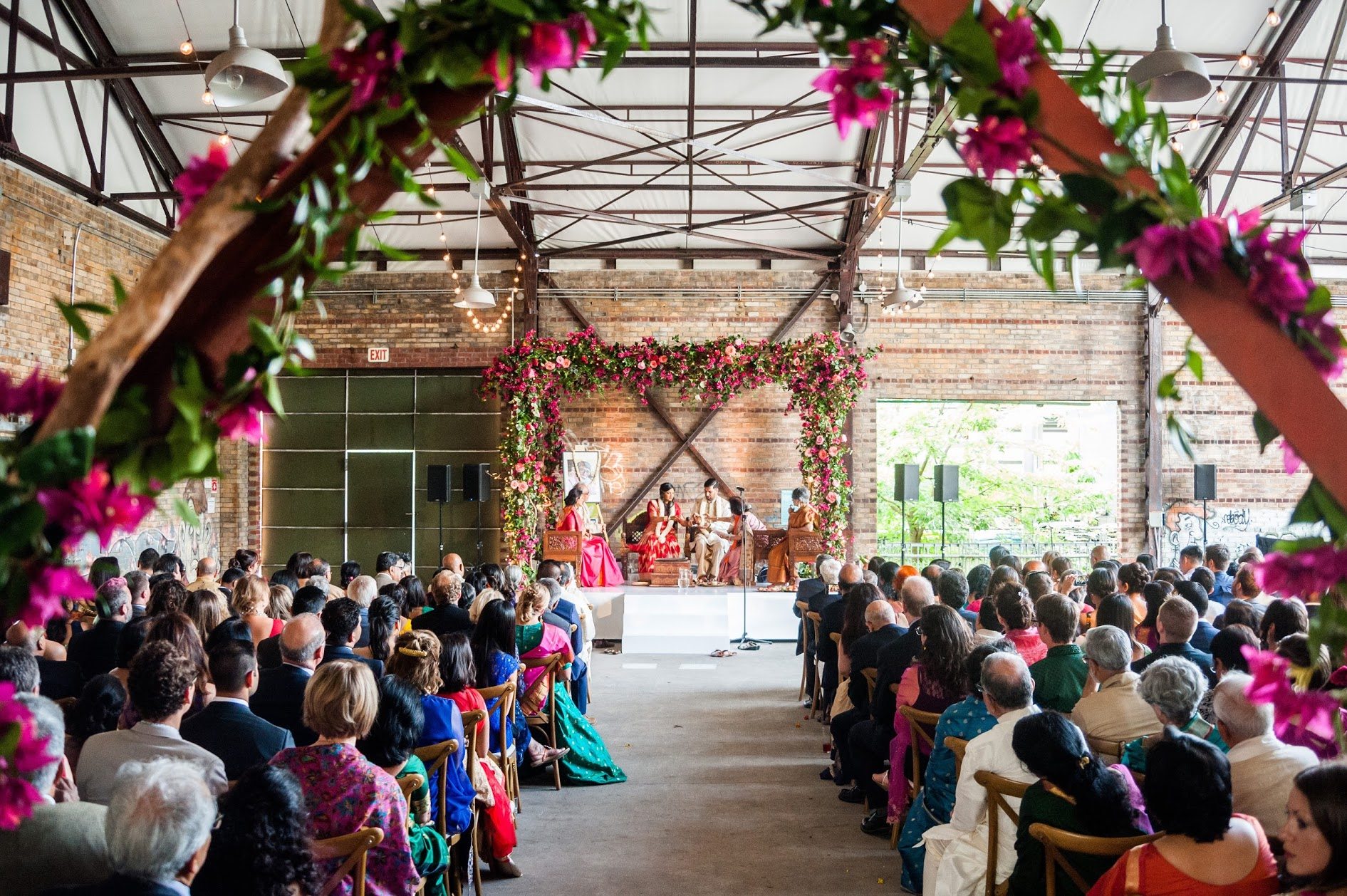 They sourced all of the week’s outfits during a whirlwind trip to India. It was a challenge to find looks that weren’t insanely bedazzled. “We had to wade through a lot of glitter,” says Datta-Ray. Patel wanted a traditional red sari, a colour that’s often worn at Hindu weddings. She ended up with a recreation of a 16th-century queen’s wedding outfit, which took four weavers five weeks to make. “It was a splurge, but it was that perfect shade of red,” says Patel: 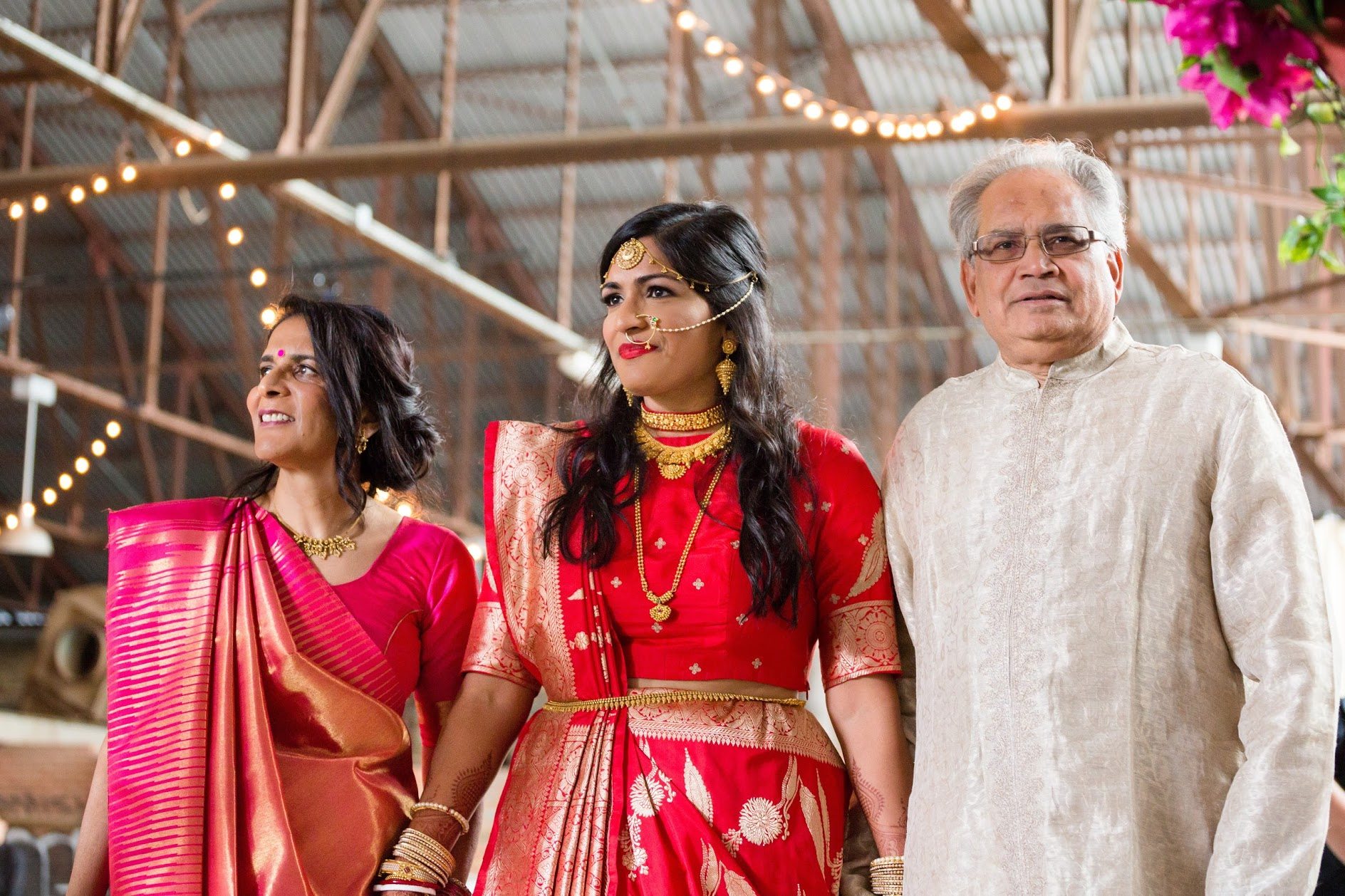 They had a day-of coordinator, so they didn’t have to worry about much on the actual afternoon. Datta-Ray entered the ceremony with a drum player: 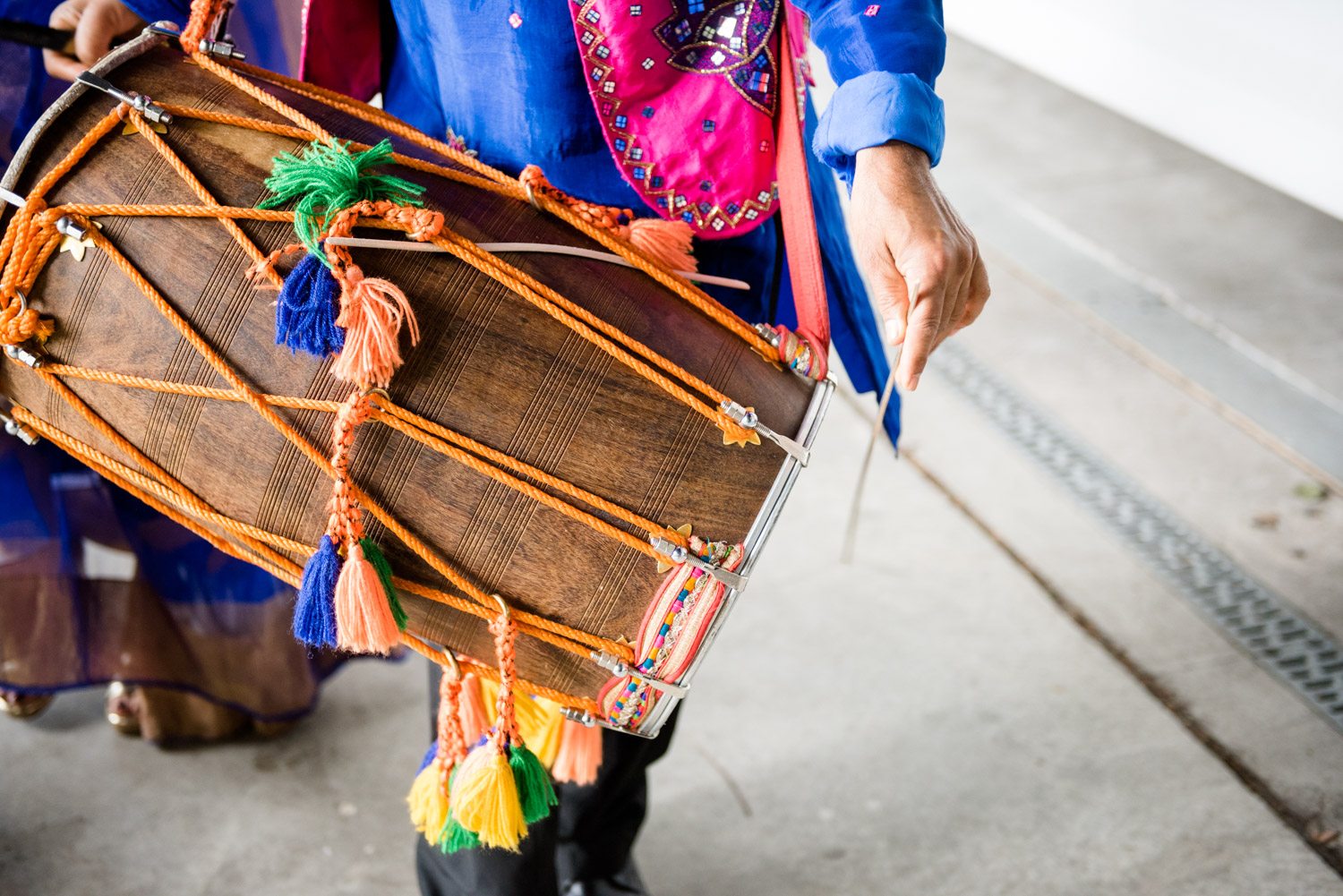 Neither of their families are particularly religious, so they found a priest who was willing to alter some of the more patriarchal elements of traditional Indian ceremonies. For instance, they changed a part about Patel’s father “giving away” the bride to Datta-Ray’s family “welcoming” the bride: 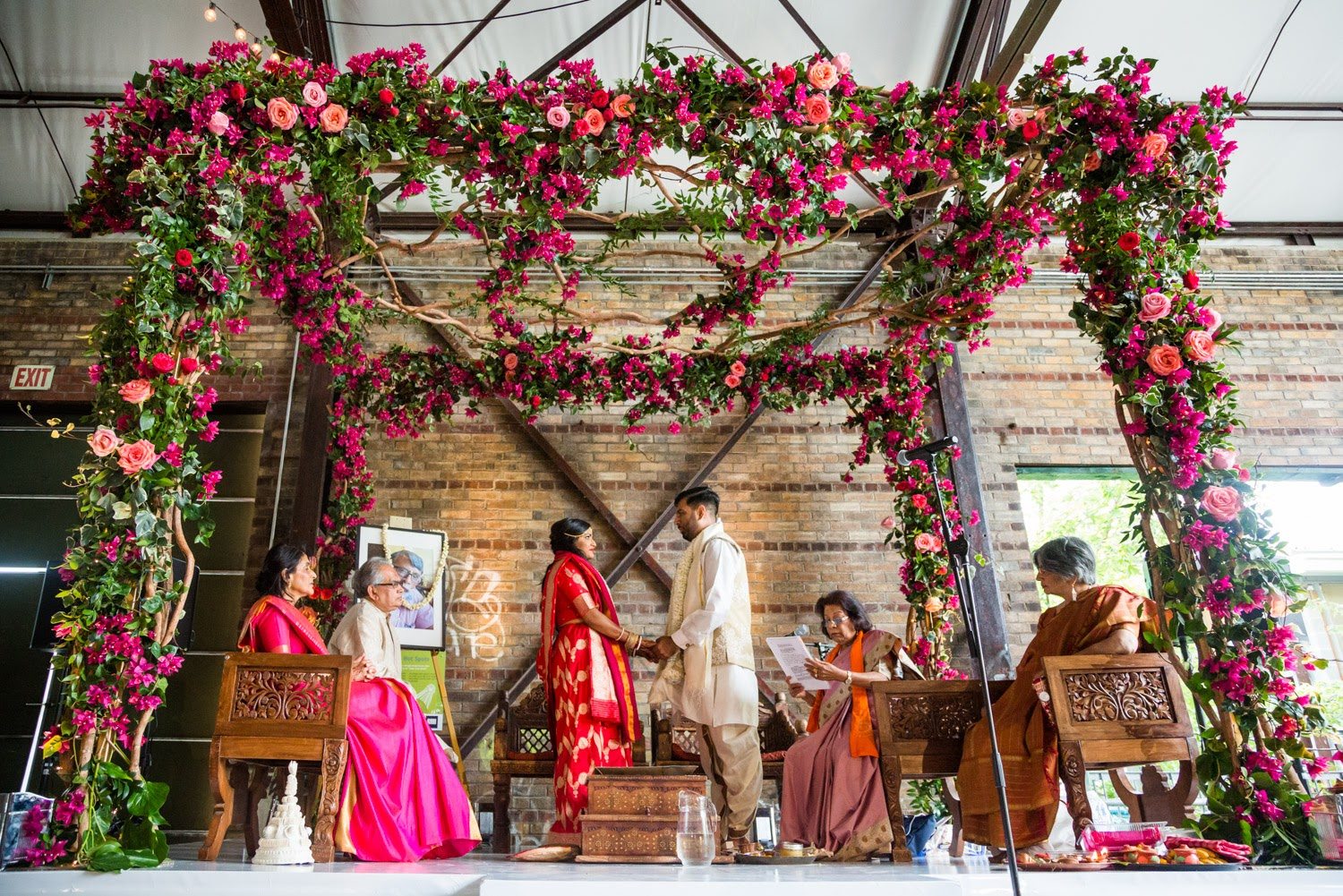 Part of the Hindu ceremony involved the exchange of garlands. In another, Datta-Ray parted Patel’s hair with a red powder called sindoor. Datta-Ray’s father passed away five years ago, and he got the same tailors who made his dad’s wedding day outfit to make his. He also wore his father’s favourite pair of cufflinks, and applied the sindor using an antique gold coin his father gave him when he was born: 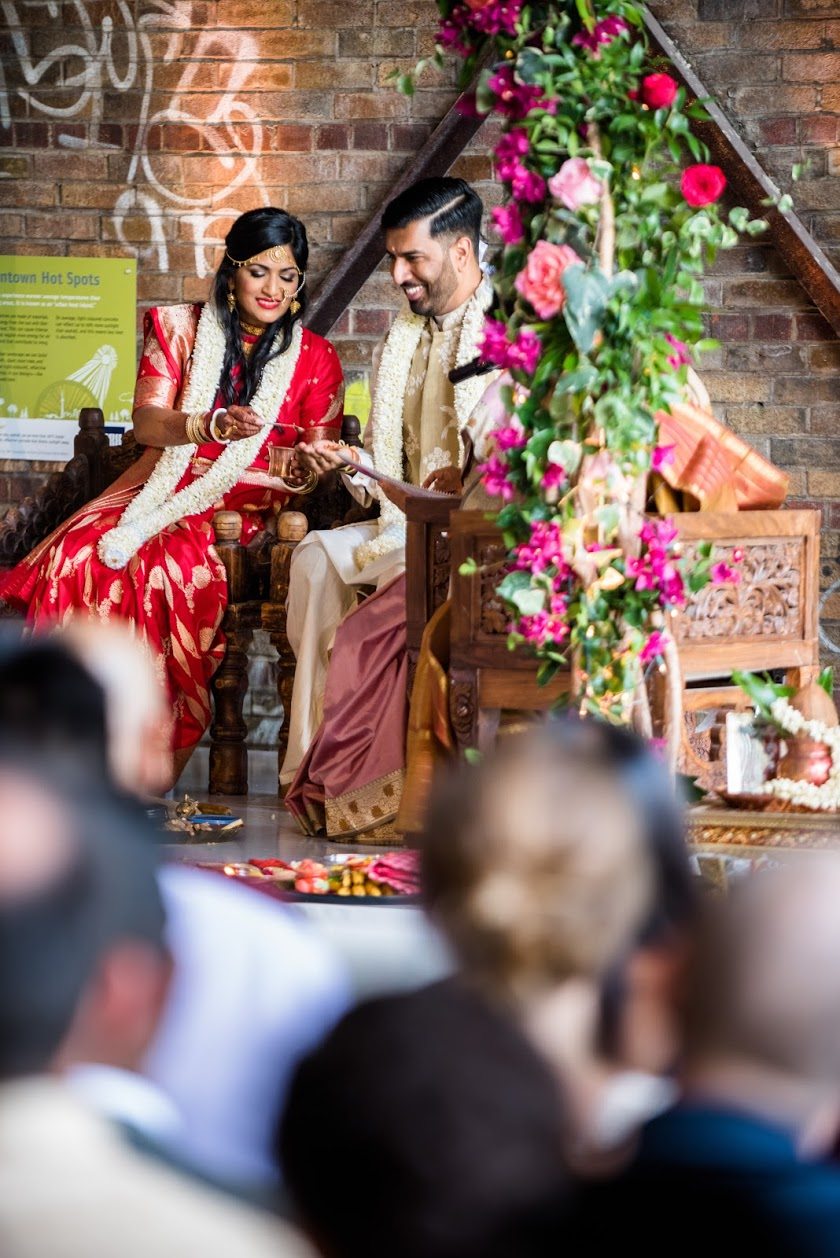 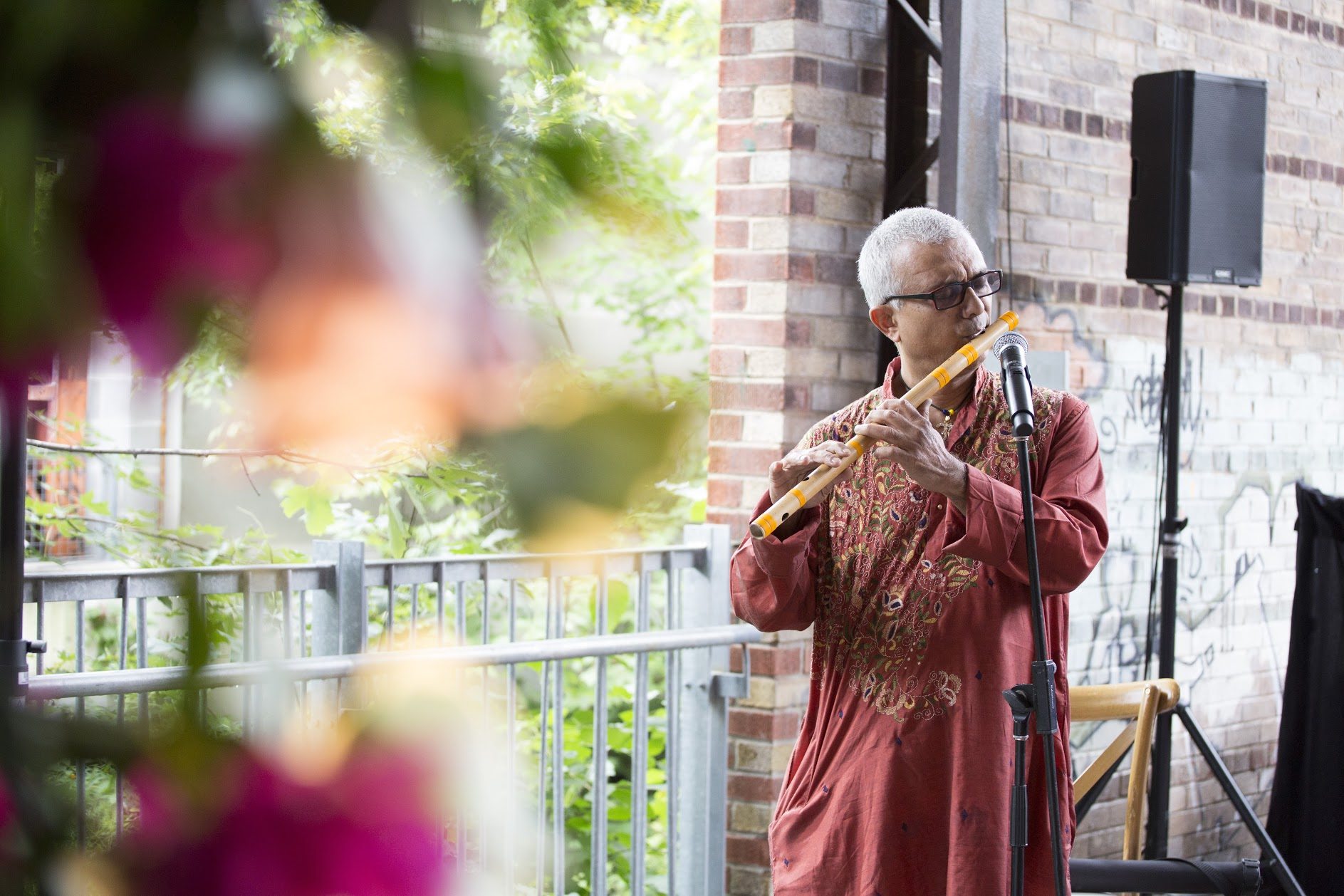 After the ceremony, they both got changed into their reception looks. For Datta-Ray, it only took a few minutes, so he went downstairs and mingled while Patel finished up. They then escaped to take a few photos around the lush property. Jewellery is a big part of Indian culture, and Patel wore pieces from her mother, mother-in-law and aunts. The ceremony’s headpiece belonged to her great-grandmother. “It was cool to wear so many people’s jewellery in one outfit,” says Patel: 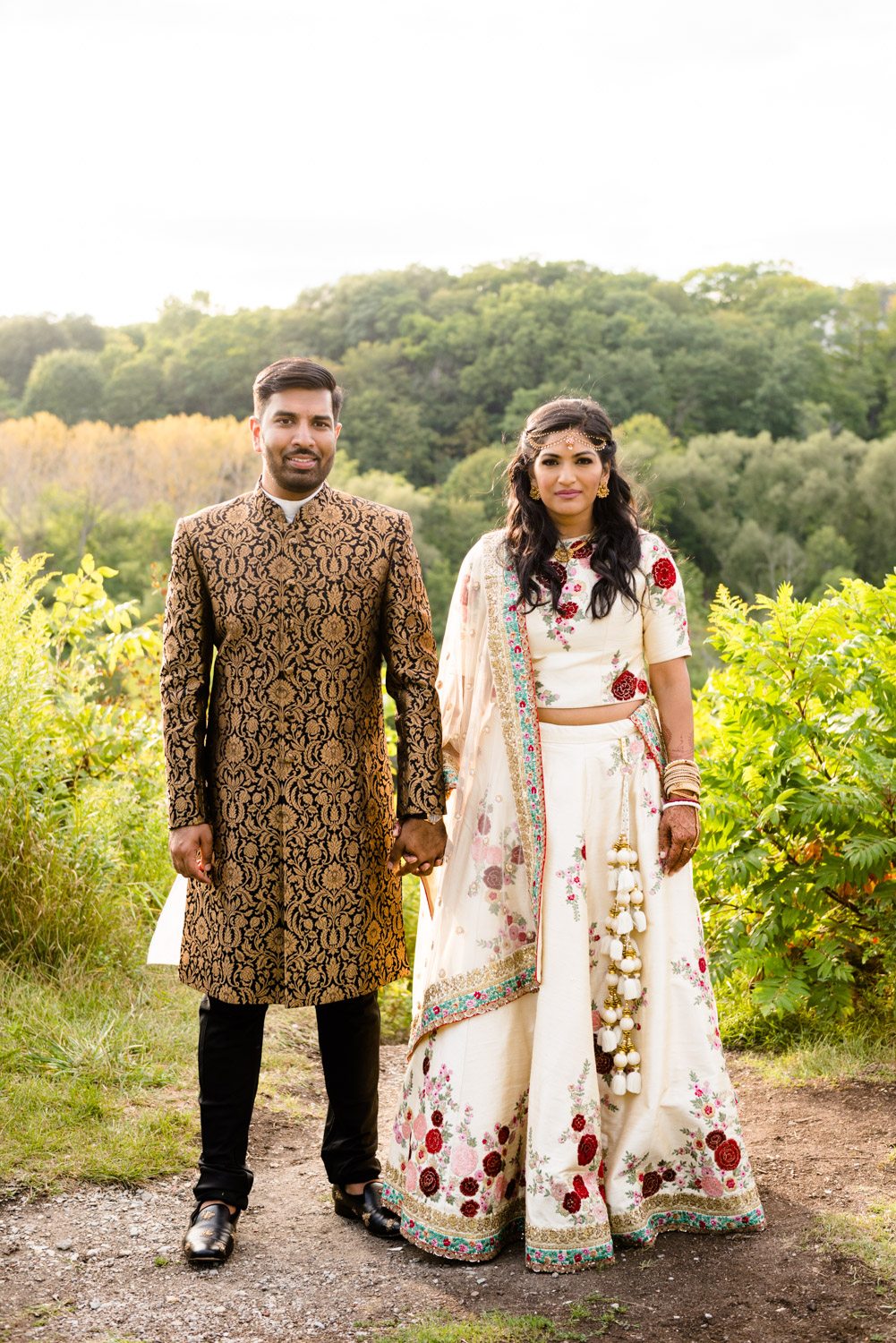 At the beginning of dinner, they did a land acknowledgement, which was an educational moment for many of their international guests: 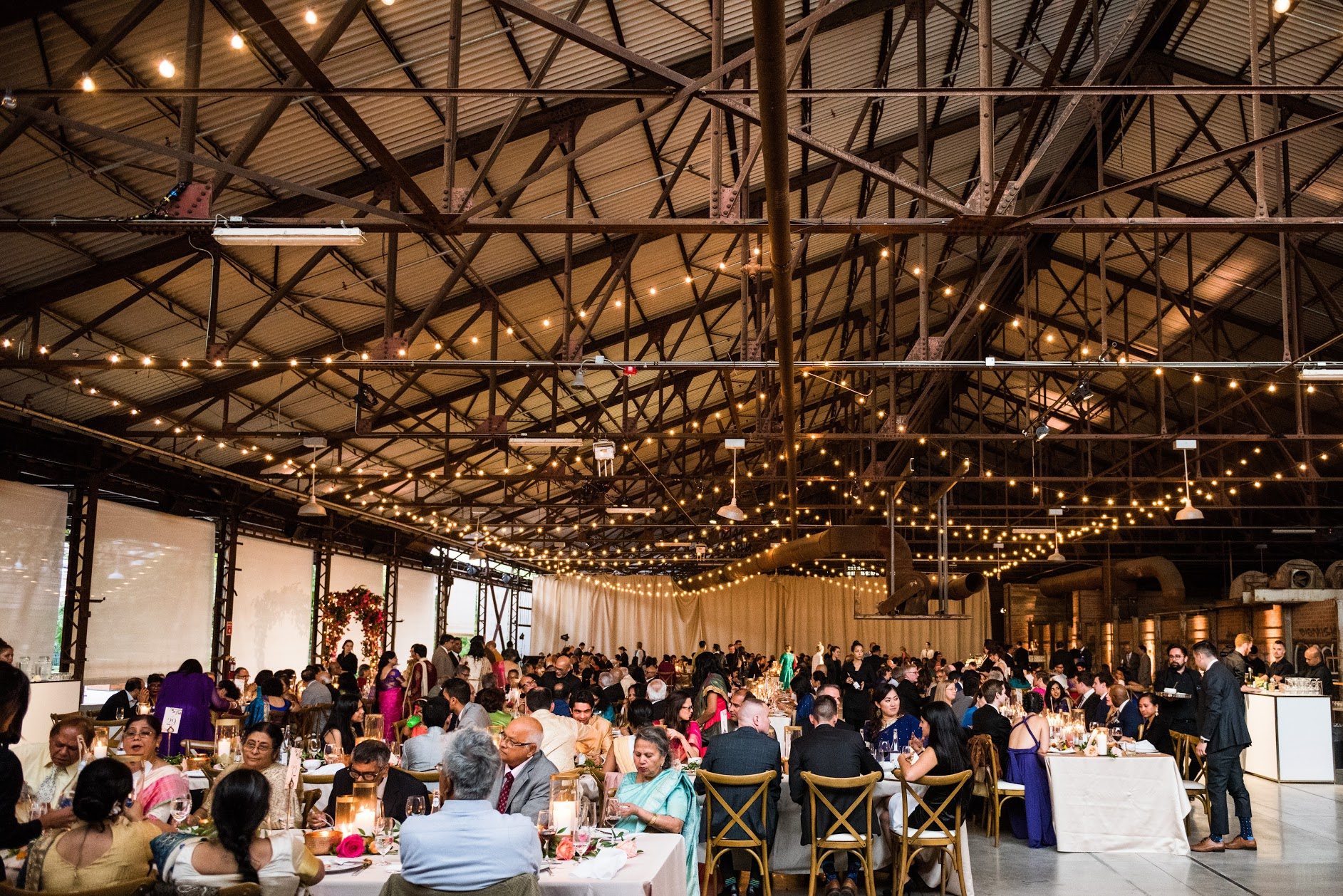 They wanted the menu to be Indian, and Brick Works allowed an outside caterer for religious reasons. The worked with The Host on an elegant family-style menu. “We didn’t want any butter chicken,” says Patel: 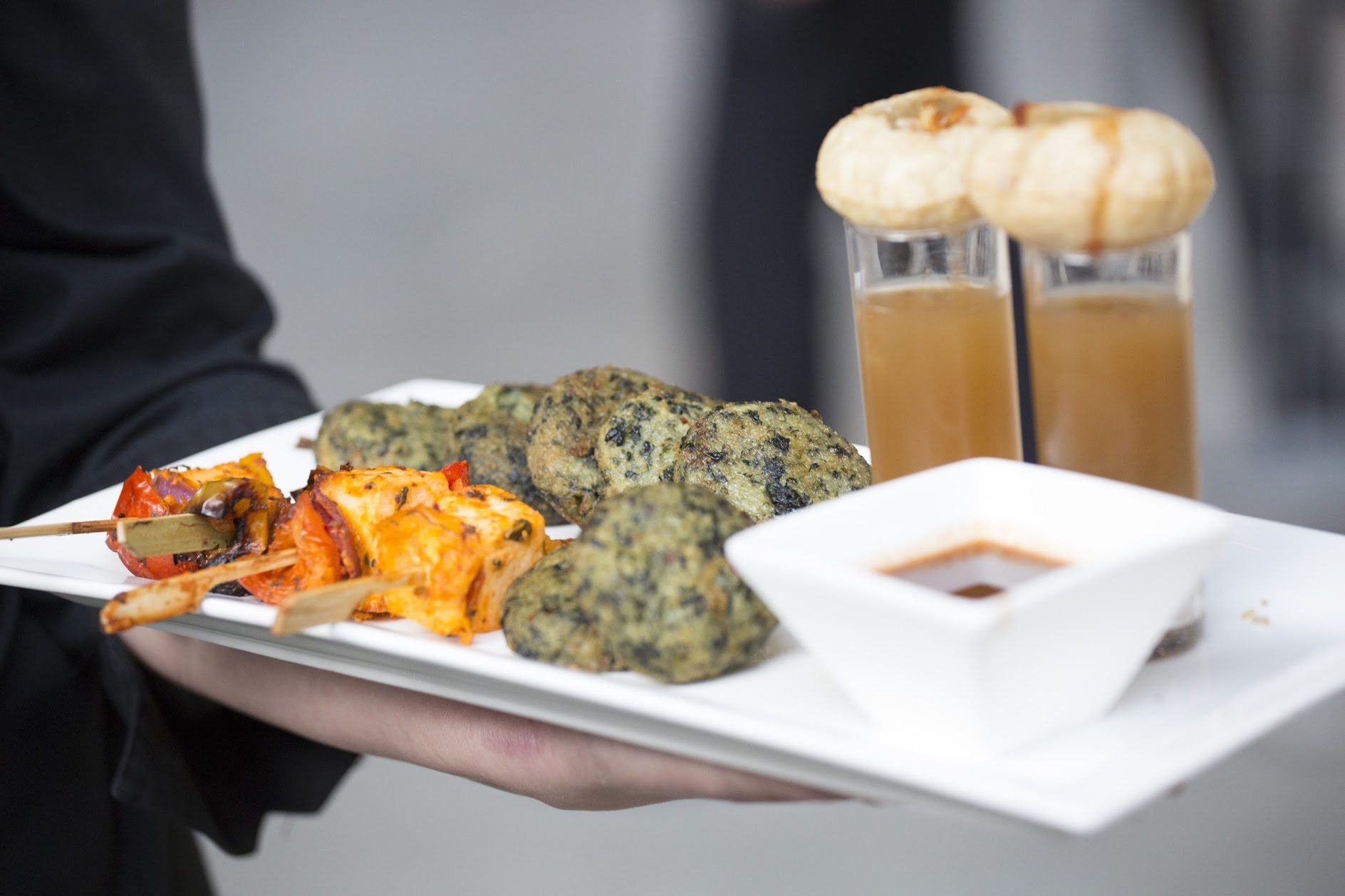 The pair sat at their own sweetheart table, from which they watched their families laugh at speeches and stories together. “What was great about having so many events before the wedding was that our families were fully integrated on the day of,” says Datta-Ray: 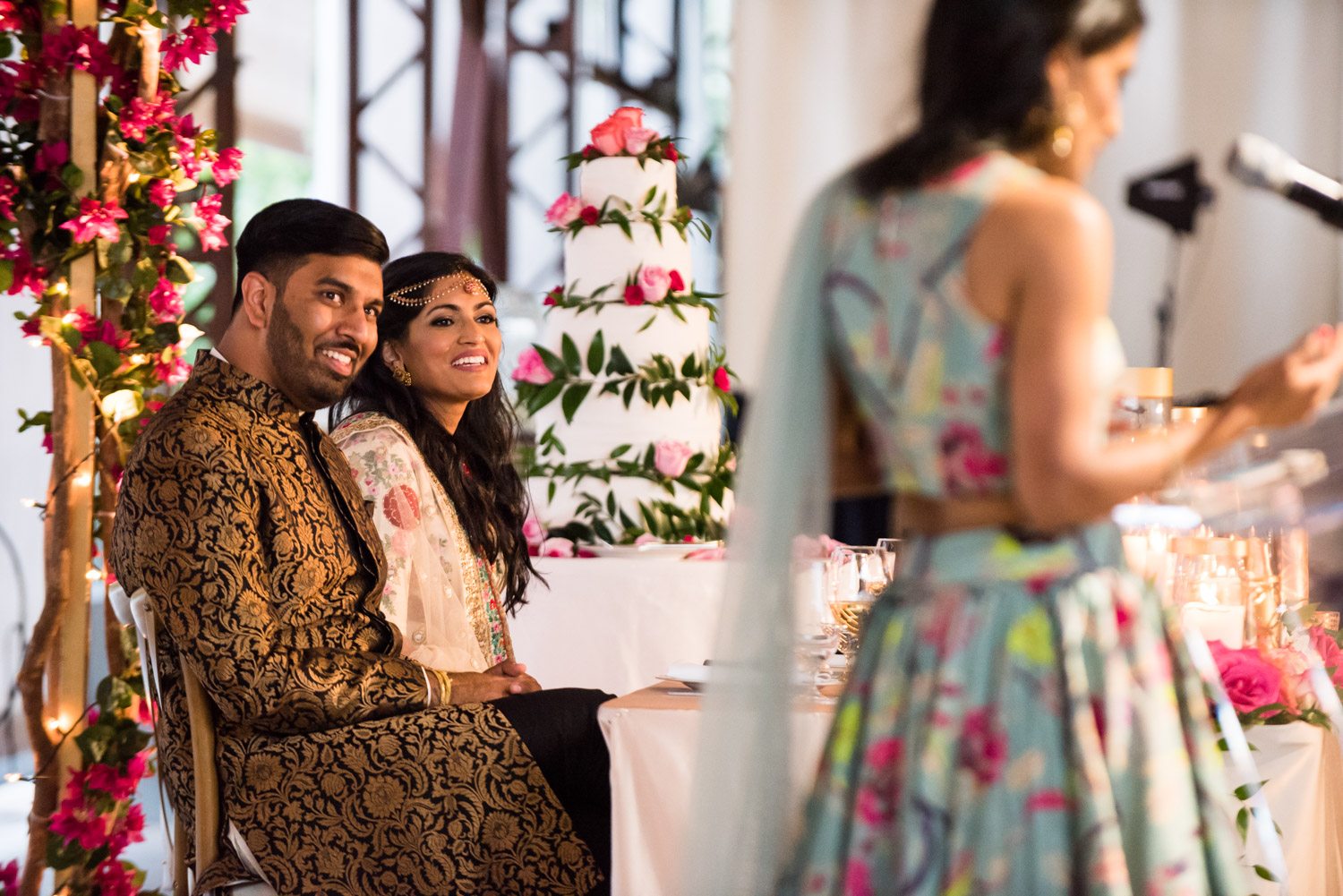 The table settings featured magnolia leaves with guests’ names in gold calligraphy, as well as more marigolds. They also gave a marigold to each guest as they arrived: 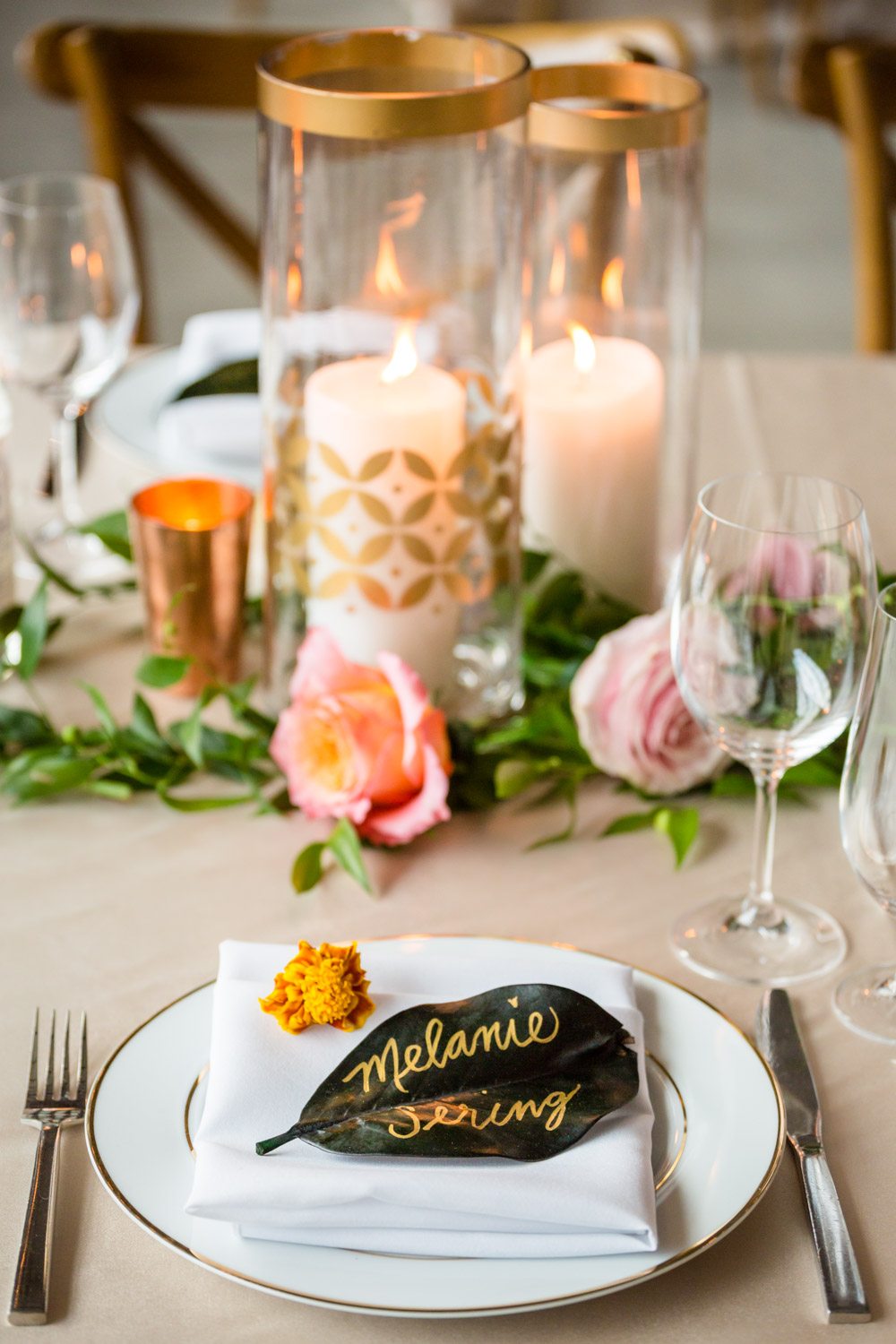 The DJ played a mix of Indian music, top 40, hip-hop and socca. “She really brought the party to the dance floor,” says Patel: 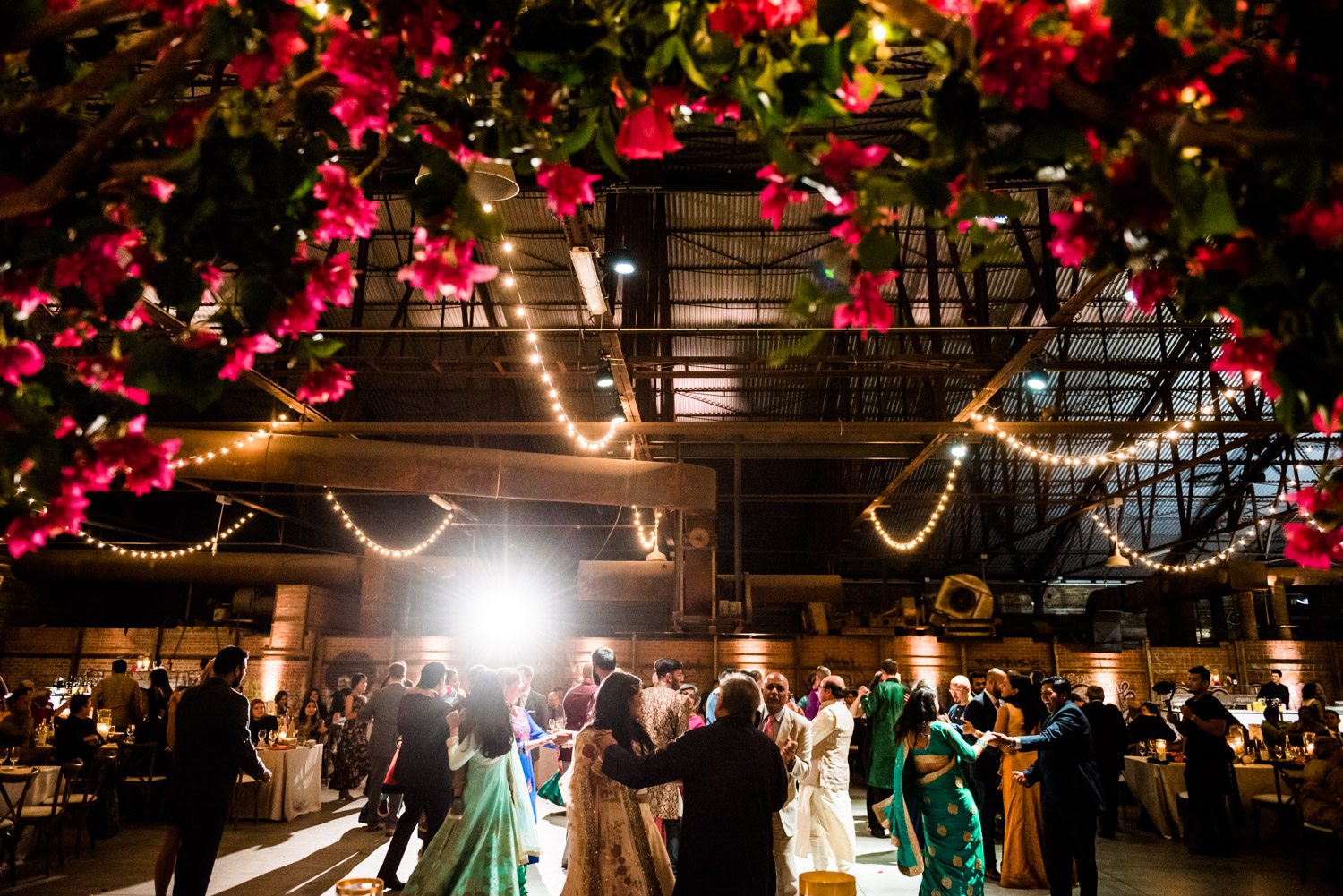 The late-night snack was a pizza truck that Datta-Ray frequents near his office in Newmarket. After the wedding, they went back to a suite in the Broadview Hotel that Datta-Ray’s sister had decorated like their favourite movie, Monsoon Wedding: 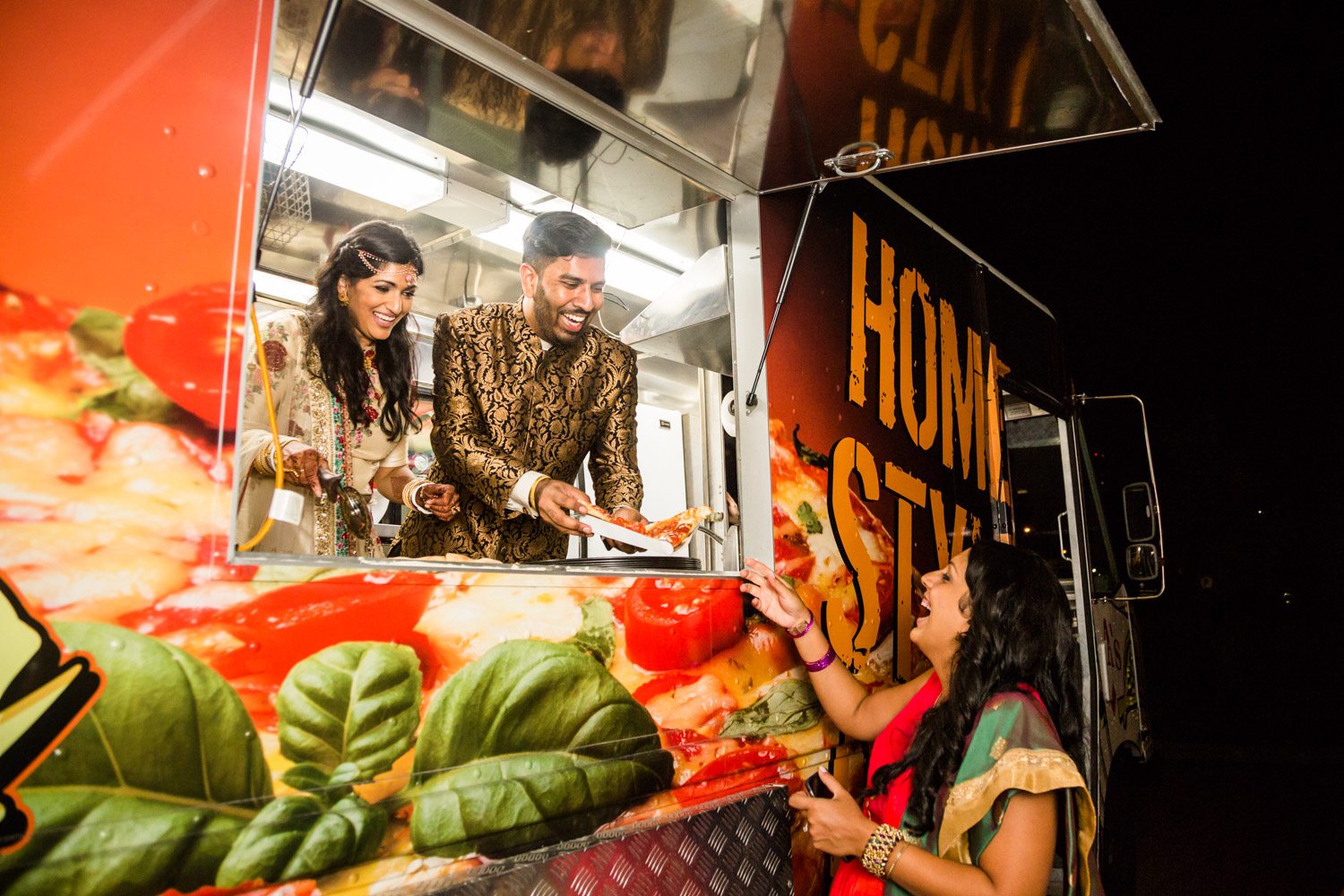