“I thought I wouldn’t have to worry about my looks”

Who: Mayor John Tory
Days in isolation: 14
Quarantine crew: Just him
Location: His condo at Bloor and Bedford

My alarm goes off at 4:55 a.m., the same time I always wake up. Then I shower and get ready for the day. Initially, being in isolation, I thought I wouldn’t have to worry about what I looked like. I gave brief consideration to growing a quarantine beard just for fun, but then my team explained that I would be doing a lot of on-camera interviews. I’ve been getting dressed almost as if I was going to work, except that I haven’t been putting on a tie. The only time I’ve worn a tie during quarantine is when I recently declared a state of emergency in the city. I discussed it with my team. I thought, If I want to look serious about doing my job then I should have a tie on. My advisors said, “What would people think of you sitting by yourself in a condo wearing a tie?”

I’ve been having a banana most mornings because it’s fast and easy. CP24 calls every day at 6:20 a.m. to do a test of Skype, because I go live at 6:30 a.m. to answer questions from viewers. My next-door neighbour has been very kindly delivering a cup of coffee to my apartment every morning at 7 a.m. He was getting it at Starbucks, but now that they’ve closed, he’s getting it from Tim Hortons. I’m not a big coffee drinker. I might have one cup a day, and I drink so slowly that it’s almost cold by the time I finish.

At 7 a.m. I do the first of our conference calls with the Emergency Operations Centre, followed by a second one at 8 a.m. with a smaller group of senior staff. I understand how being in isolation can be lonely for a lot of people, but I’m talking to people non-stop.

My wife, Barbara, and I are normally here together, but when we learned that I would have to go into isolation after returning from a business trip to London, England, we decided it was best for her to stay somewhere else because it would be safer and less complicated. If she was here we’d have to use different bathrooms and dishes, and constantly be wiping down surfaces, to prevent any potential spread of the virus.

I’ve basically been spending 14 hours a day sitting in the same chair, which is in a small family room right off the kitchen. I’m on the phone for most of the day. I’ll go from the family room to a small office, where I do live interviews on my iPad. Otherwise, I’m eating meals at the kitchen counter. 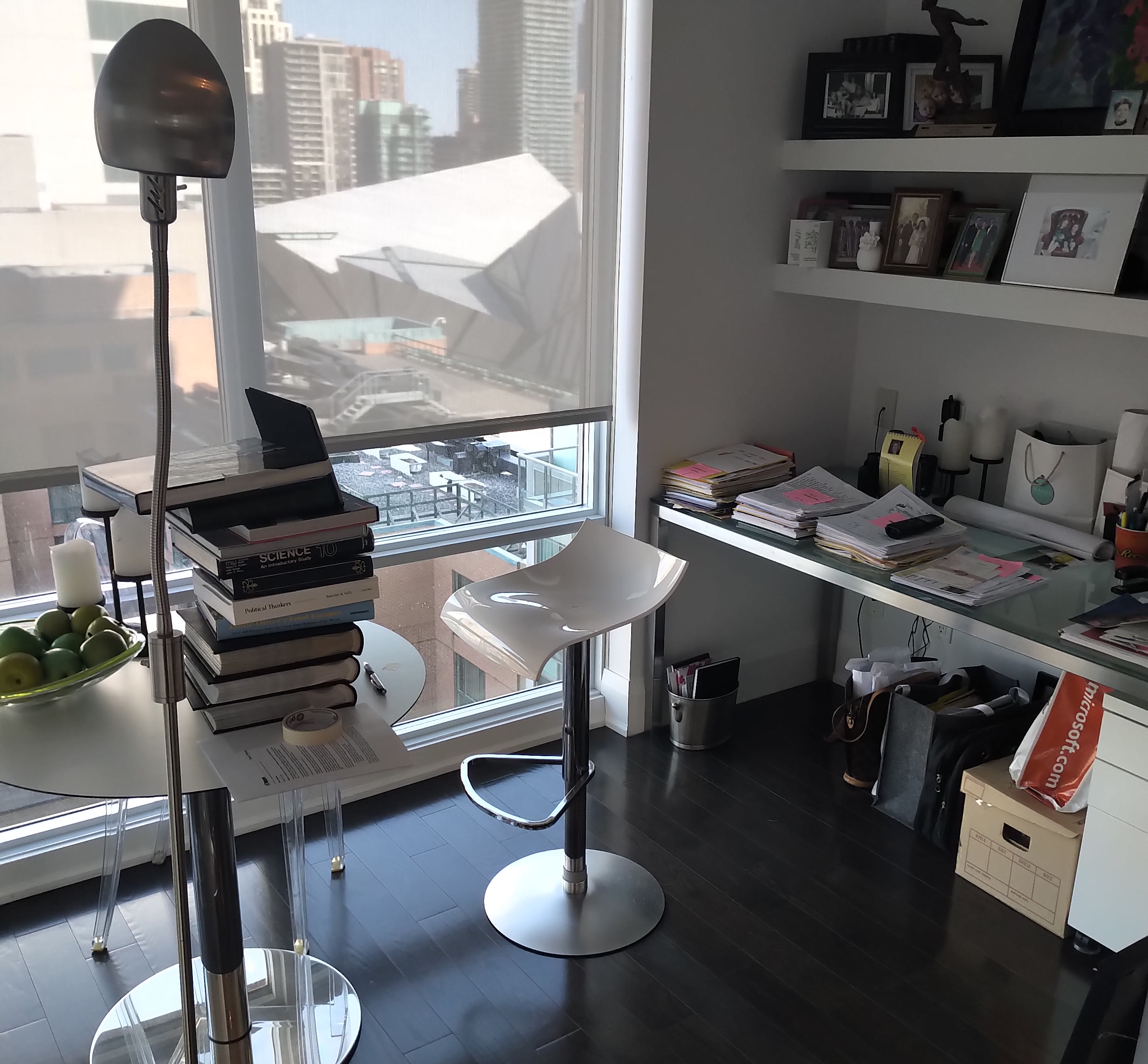 My quarantine experience has been different from most people’s because I’m either in meetings or doing interviews for the entire day. My schedule has been extremely regimented, and when I get to the end of the day, I’m thinking, Where did the time go?

I managed to get out on my balcony a couple of times last weekend, when we had those nice sunny days. The balcony overlooks Bloor Street, and I saw very little activity, which made me very happy. I’ve also been keeping up with my physiotherapy exercises, which can be done in my apartment, so that’s lucky. I had surgery on my Achilles tendon last summer after an old leg injury flared up.

I’ve done a little bit of FaceTiming with my grandkids. Last week, my whole family was in Collingwood for March Break, so I spoke to them. Truth be told, with my job, I don’t get a chance to talk to my kids and grandkids as often as I should. I work most weekends and nights. That said, I’m happy that people are able to communicate with their loved ones while they can’t be with them physically. And maybe FaceTime will be a new thing for me after we get through this.

I get my last briefing from my chief of staff around 9 p.m. After that, I’ll have dinner. My son dropped off some prepared meals on my first day of isolation, and some friends were kind enough to ask me for my grocery list and drop stuff off over the weekend. It’s all pre-prepared meals and items. Last night, I had a Thai chicken dish and some heirloom carrots, which was very good. It’s not that I can’t cook. I just know that after a long day I’m not going to feel like cooking a chicken breast and boiling water for vegetables.

I turn on the news at 9 p.m. First I watch The National, then I turn to CP24 because they are very local, then at 11 p.m. I watch City or Global. If I don’t fall asleep, I’ll watch the first part of the 11:30 news on CTV. The funny thing is that this is my nightly pattern. My wife can’t stand it.

I don’t have any trouble falling asleep at the end of the day. I can fall asleep right away and then I’m up five or six hours later. So that’s pretty much it. I haven’t been watching Netflix or anything, because I haven’t had the time. I hardly turn on the TV before the nightly news. Once to watch Mr. Trudeau speak and twice to see Mr. Ford.

Like I said, my quarantine experience has been a little different. It is strange, though, not to have seen another person in more than a week. That’s how long it was between the day my son dropped off groceries and the day my chief of staff came to my door so I could sign the emergency order. I had gloves on and had to wipe everything down when I was done. Fortunately, my post-travel quarantine just ended, so I can finally get back to City Hall.

-As told to Courtney Shea