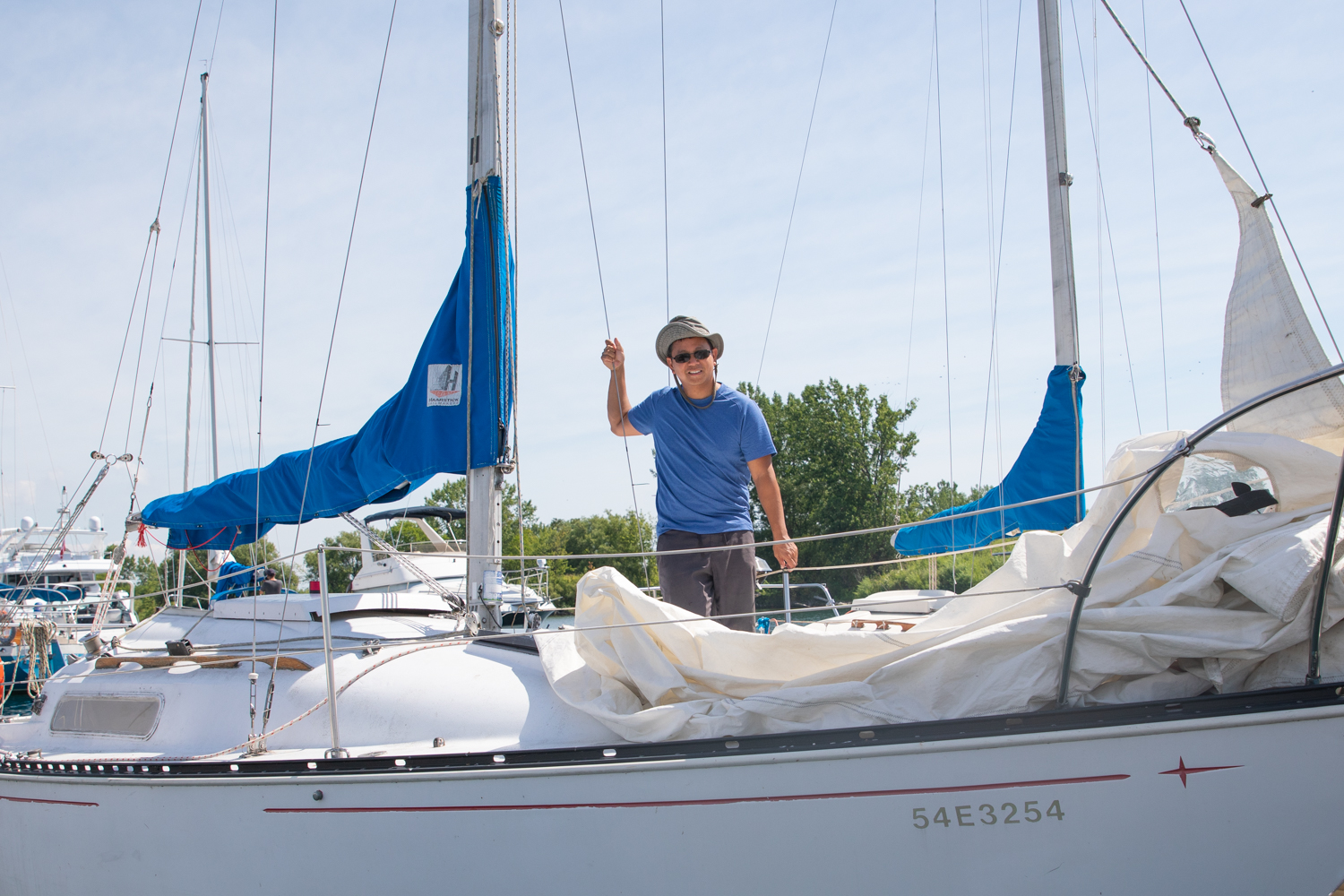 Who he is: Brian Pho, a 42-year-old freelance headhunter and recruiter

Plus a few extras: $200 for a secondhand BBQ, $20 to repair the lifeline (the thin railing that surrounds the boat), $70 for a new rope for the main sail, $90 for three LED lights from Amazon, and another $900 for the winterization haul out, a crane service to take the boat out of the water and put it in its cradle.

I began sailing in 2014 because I wanted an outdoor hobby in the summer to fill the hours after work. After I crewed on keelboats and sailed dinghies for about six years, I saw buying a my own sailboat as the next progression.

I had been looking for more than a year when I saw a listing on Kijiji in June for a 25-foot-sailboat for $3,500. It came with a docking spot at the Outer Harbour Marina near Cherry beach, which was an easy drive down the DVP from my condo in North York. As long as it had working sails and a good engine, I was in. I wasn’t too picky about the details. 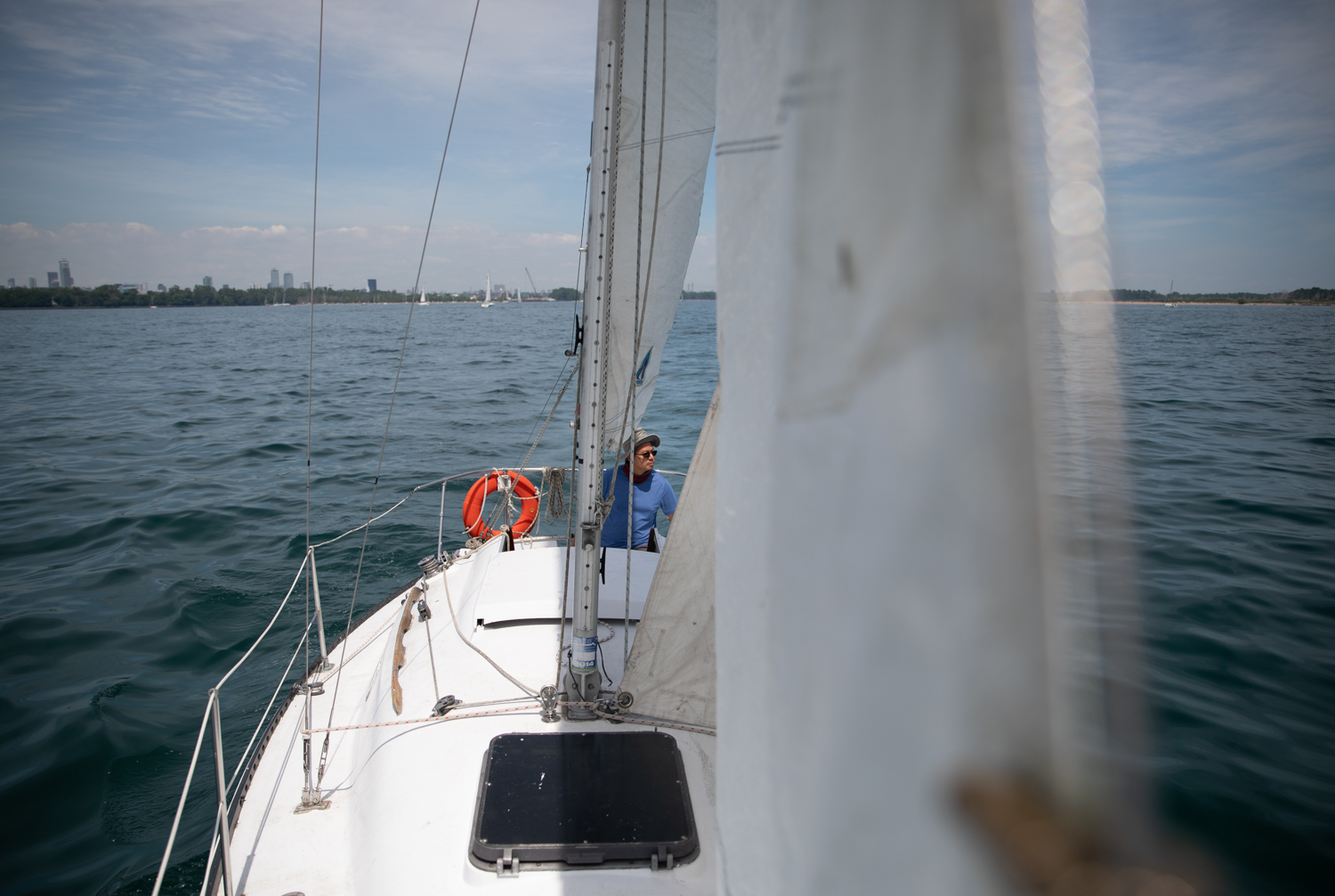 When I messaged the owner, Joel, to schedule a viewing, he told me he bought the boat because he grew up sailing with his father and grandfather on Georgian Bay, and he wanted to get in touch with his roots. He paid $3,800 at the end of May but then realized he couldn’t afford to keep it because of all of the extra costs associated with owning a boat, like the insurance and docking fees, which added up to roughly $730 a month. Joel is a renovations contractor but wasn’t getting much work at the time because of the pandemic. He felt sad about selling the boat so soon and suggested going half on all costs and sharing it for the rest of the season.

I have friends who have known each other for 10 years, and their boat co-ownership has worked well, but Joel was a complete stranger. We went for a sail to get to know each other a little, and I felt comfortable with him—he was really relaxed and easygoing. Instinctively, I thought that co-owning with him would work out, and saving some money was a bonus. I still wanted a second opinion, though, so I brought a friend along for another sail, and that friend gave Joel the thumbs up, too. 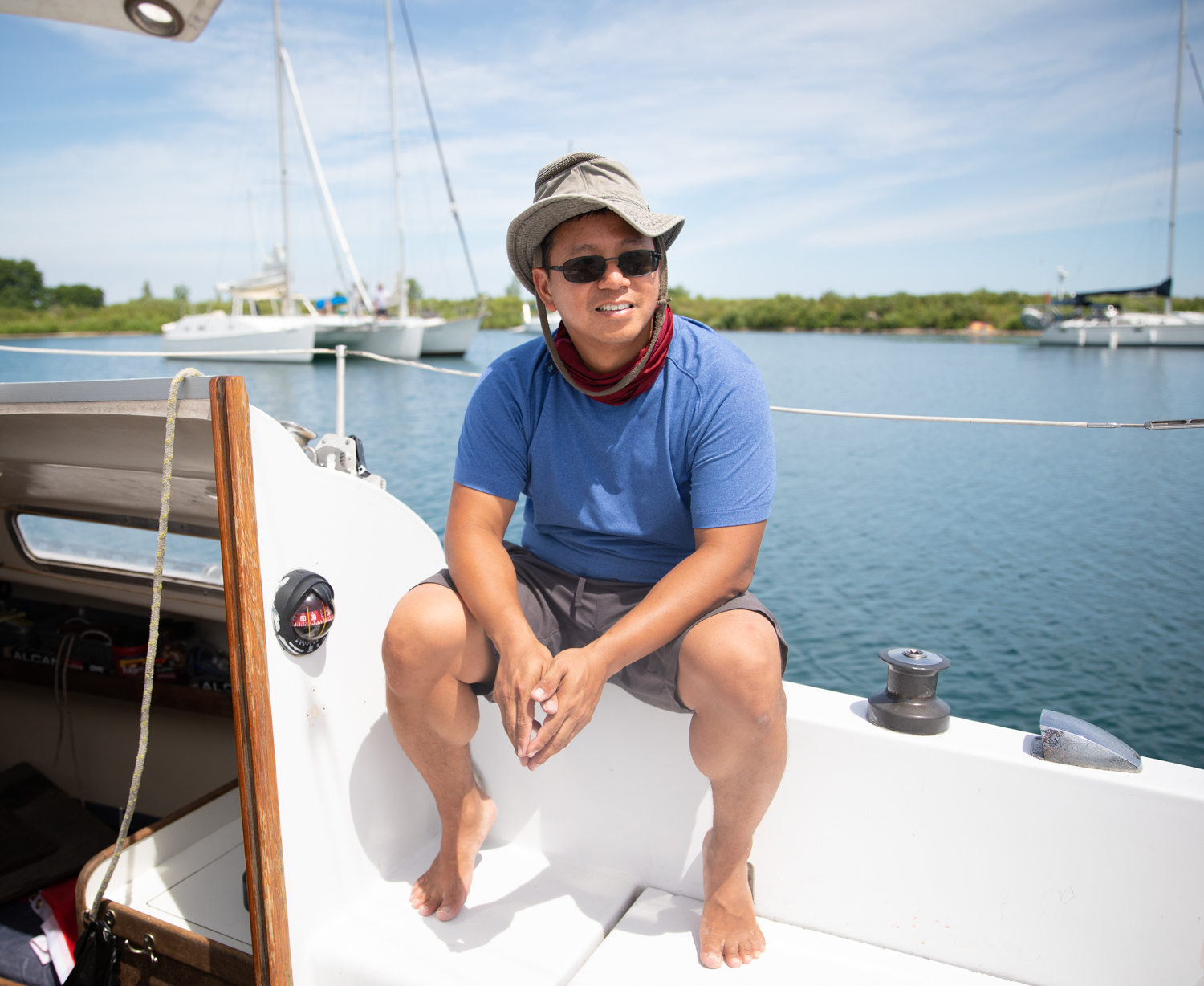 I did look at another boat, a 22-foot 1980 Nonsuch at another marina, but the seller wanted $22,000, which was too expensive for my first. Joel and I made a verbal agreement that if either of us wants to buy the other out at the end of the season, we’d pay the other $2,000. The other option is we both like co-ownership and would continue next year. Our partnership is pretty simple: we split all costs and just text each other whenever we want to use the boat, and it’s worked out so far.

That’s not to say everything’s perfect. The electrical system doesn’t work on our boat, which is partly why it was so inexpensive. We have no battery, instrumentation, or depth finder. It’s still legal to operate, though, and neither of us wants to spend the money to fix the electrical right now. I’d like to get new sails at some point, but it’ll cost $2,000, and Joel doesn’t have the cash. The boat has a cabin that can sleep four people, though two would be more comfortable. It had a propane camping stove and a sink and also a toilet, which we replaced. (By law, to drink on a boat in Ontario, you need to have a permanent place to sleep, cooking facilities and a washroom.) 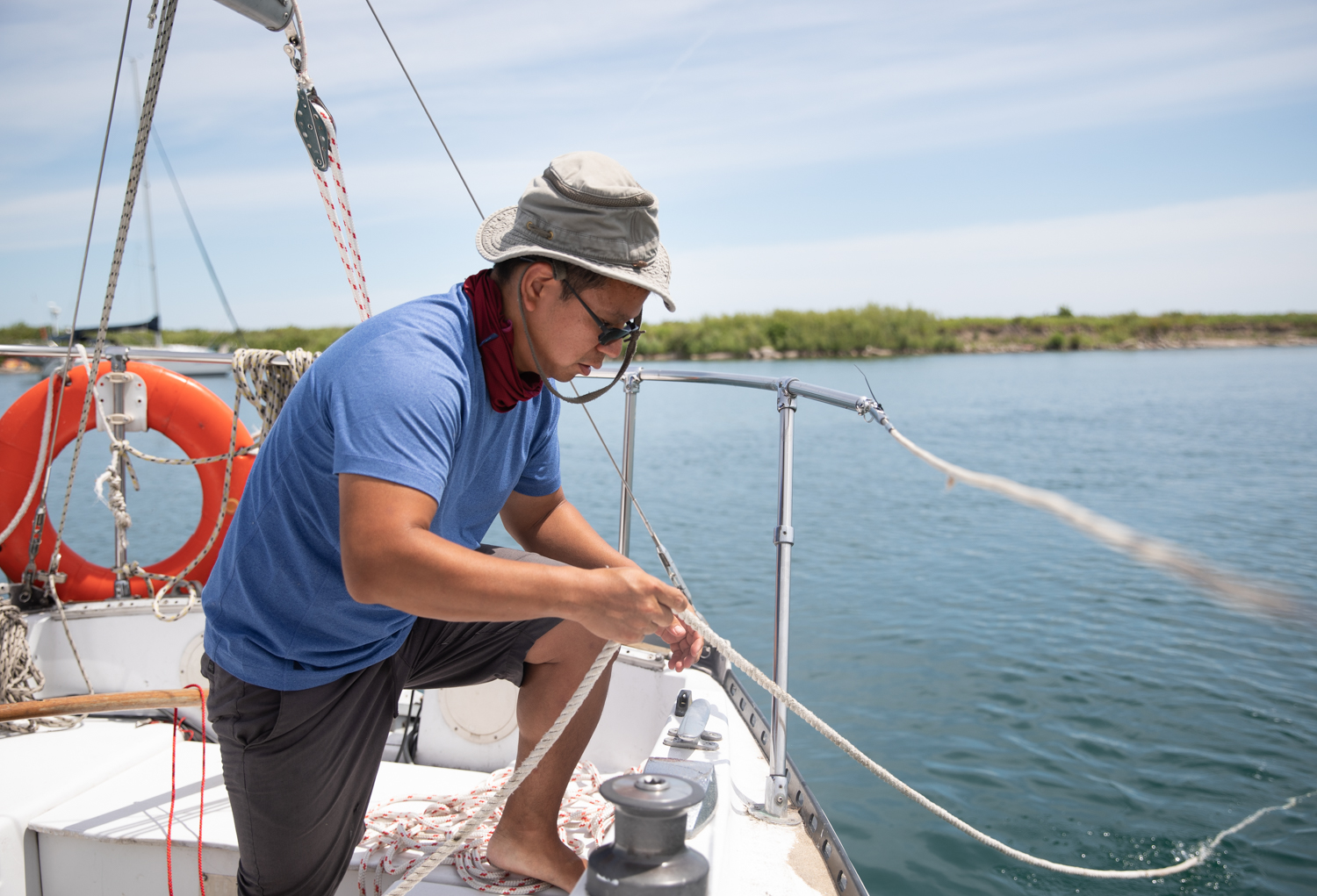 I also did some minor renovations just so things function better. For example, I picked up some LED camping lights off Amazon for $30 to improvise a mast light. I stuck them on with Velcro and now we have lights at night. I also picked up bowlights and navigation lights from Amazon for $30 each.

I bought a second-hand BBQ off Kijiji for $200 as an upgrade from the camping stove. I didn’t ask Joel to split the BBQ costs with me. I figure I’ll call it even if he does some light maintenance on the boat, like making sure the spark plugs are working or changing the oil. He’s a really handy guy and great at fixing things. 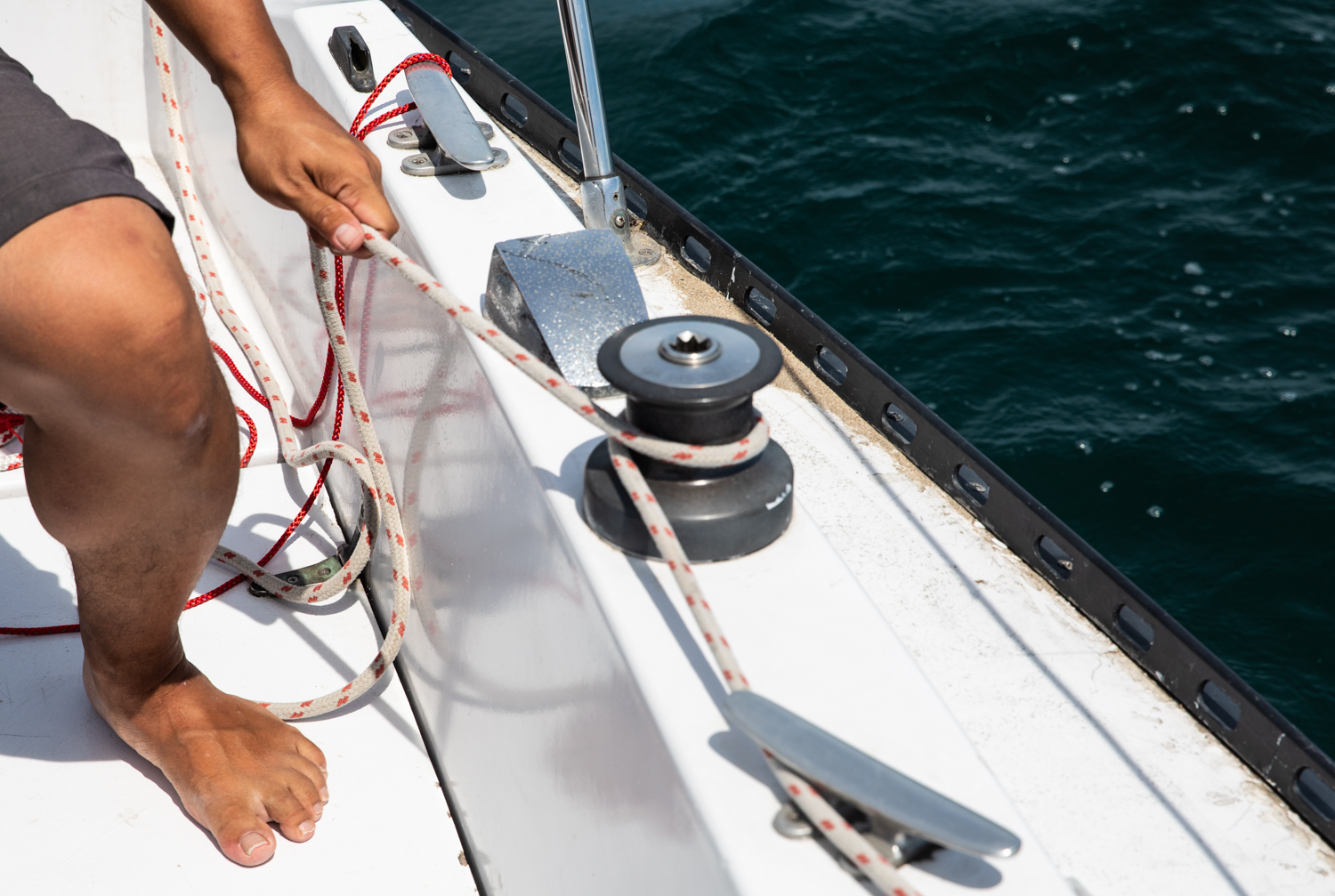 It’s been pretty busy on the lake this summer—more busy than usual. I think during the lockdown, people were cooped up inside too long with nothing to do, and so they’ve gravitated towards outdoor activities.

I use the boat mostly to work on my sailing skills. But I also like pleasure cruising. I love going to a secluded spot on Lake Ontario called the Cove, dropping the anchor and going for a swim. Joel likes to take the boat for a few days at a time to the island with his girlfriend and anchor there. 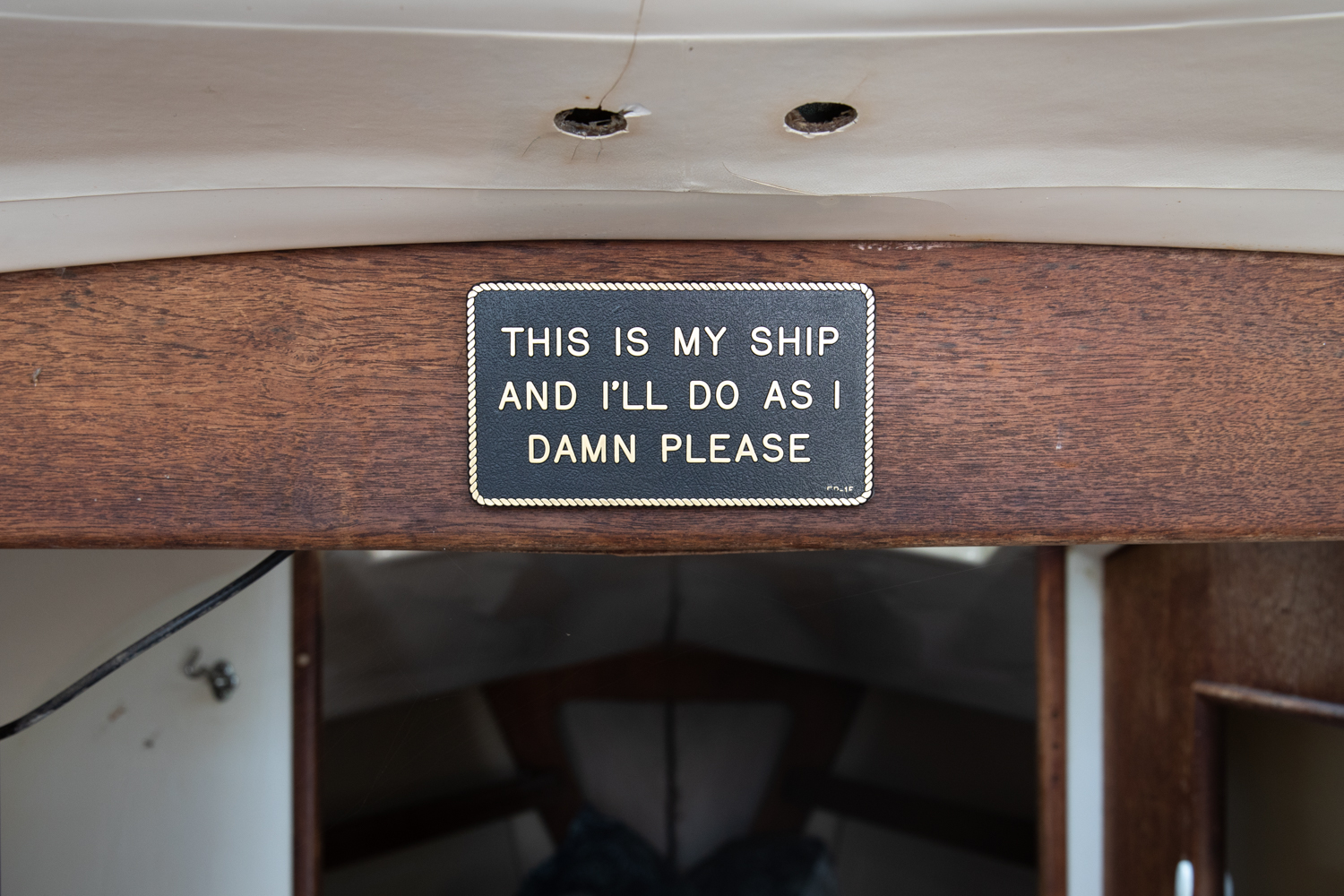 This is my first boat, so I’m still getting comfortable with it and learning how to control it. Up until this, the biggest boat I’d ever captained was a 15-foot Albacore, a dinghy made for two people, so I was a little nervous my first few times out on Waverider, but I went with seasoned sailor friends who had plenty of keelboat experience. On a dinghy, you can recover faster if you run into any problems. With a keelboat like this, things can get violent quickly if you lose control.

One weekend in June, I invited two non-sailor friends to enjoy the afternoon with me on the lake. The waters were choppy, and there were a lot of waves. We untied the stern line and bowline, but my friend didn’t know to tie the bowline around the lifeline. We were sailing for an hour when we discovered the bowline got wrapped around the propeller. You can’t start your engine like that. It’s like trying to turn a fan on when a rope is stuck around the blades. 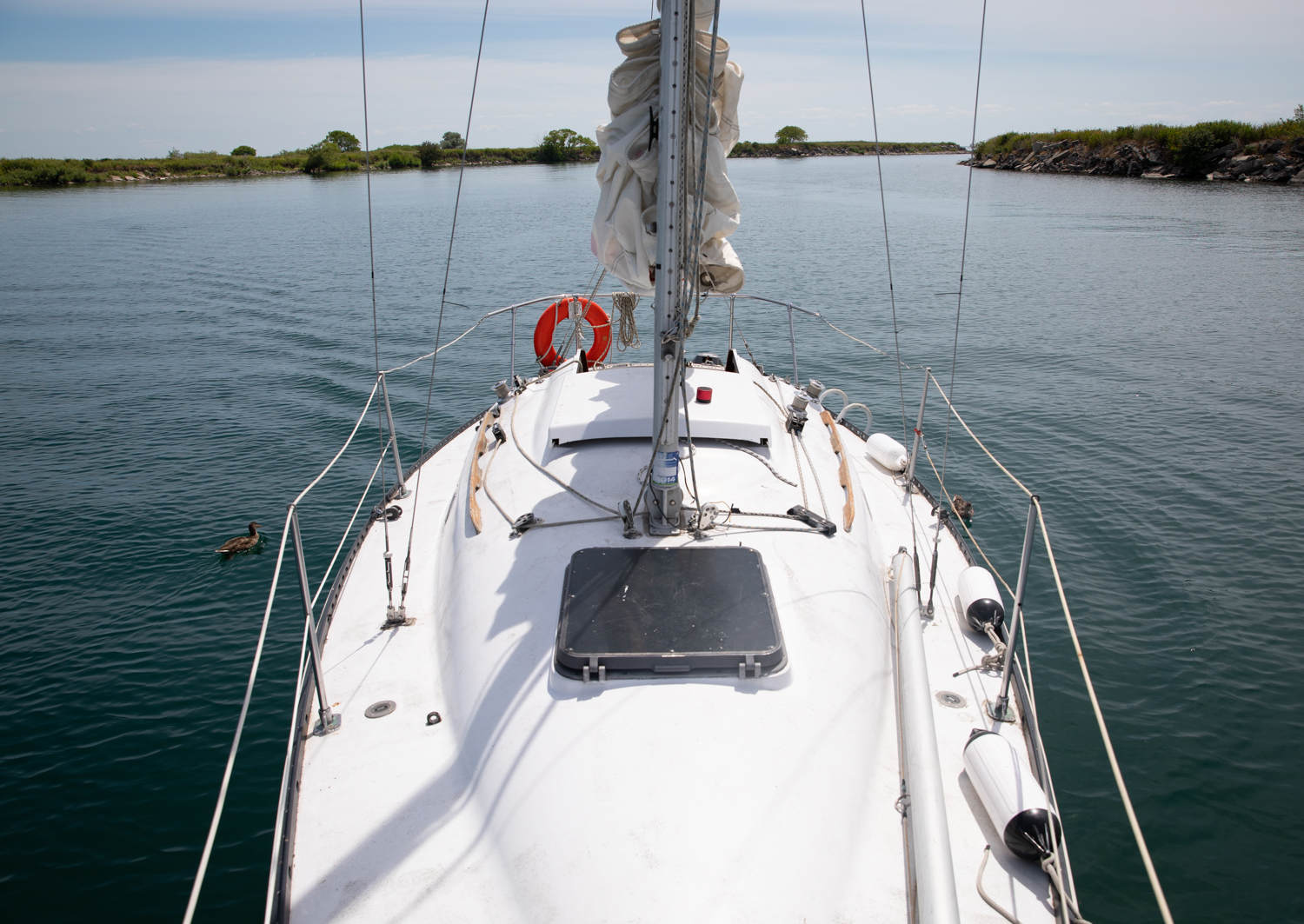 I dropped the anchor and had to jump into the water to untangle the bowline. But because I was so concerned about the propeller, I didn’t drop our anchor very well and we started drifting towards shore while I was in the water.

We were really lucky with the wind direction. Instead of hitting the rocks, we were blown toward the sand, and we ended up beached. Boaters at a neighbouring boat club, the Toronto Multihull Cruising Club, saw us and brought a motorboat to tow us out. Joel was pretty easygoing about it. When I told him that the boat had been run aground, he said, “That’s okay, I’ve done that too. Did you have fun?” And we left it at that. 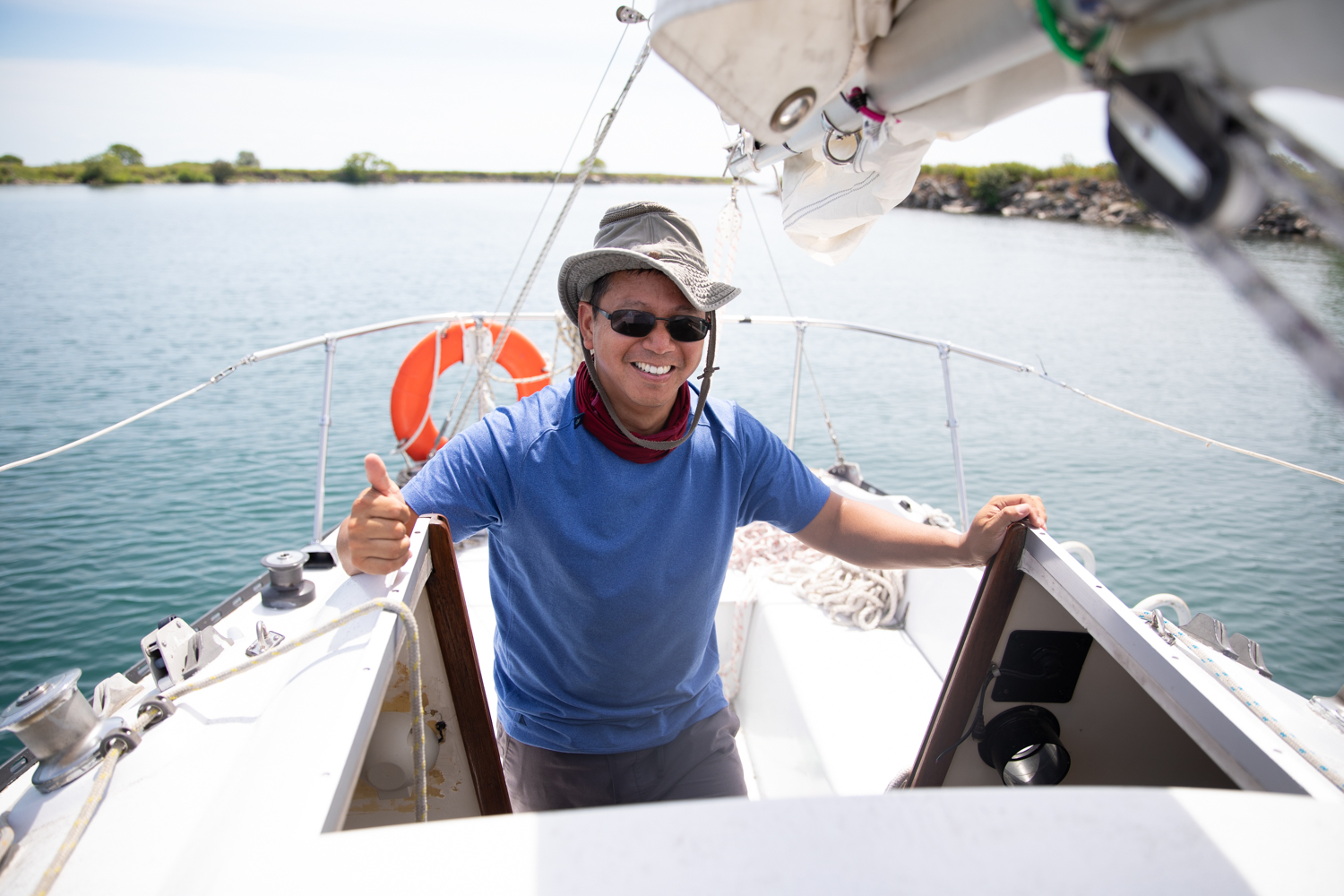 Now that we’re in Stage 3, Ontario Sailing—the association that governs racing in Ontario—is allowing racing for the first time this season, but we still have to be socially distanced from each other on the boat. If there wasn’t a pandemic, I’d have six or seven people onboard and it wouldn’t be a problem. Last year I went to a couple of boat parties, but I’m not doing that this year. I’m limiting my cruising to three people, maybe four, and I always remind guests to bring their face masks. We all need to respect each other’s comfort levels with social distancing.

Boat co-ownership with a stranger is unconventional—it’s almost like jumping into a marriage without knowing the person—but I got lucky with Joel. If he decided to cash out at the end of the season, I would find a new boat partner or I might go it alone. I’m thinking about getting our boat race-ready eventually. I’d love to get new sails next year.