Championing change one cape at a time

Championing change one cape at a time

Tim Rose was born with spastic quadriplegia and grew up going to Holland Bloorview Kids Rehabilitation Hospital. Over 20 years later, he’s giving back through their Capes for Kids campaign.

How would you describe a hero? For Tim Rose, heroes are people who push boundaries, aren’t afraid to be different, and always advocate for change.

That’s why for Rose, one of his heroes is his mother.

When Rose was born, he was diagnosed with spastic quadriplegia—a form of cerebral palsy that affects all four limbs. While doctors originally said that Rose would never speak, his mother actively advocated on his behalf to ensure he would receive the treatments he needed to succeed.

“My mom was a very vocal parent advocate with me growing up in the ‘80s, and there was stuff that she had to push against, such as getting me included in a mainstream school,” says Rose. “Everyone wanted to put me in the special ed classes, and she said, ‘No, his brain’s fine.’”

She was right. Eventually he learned to speak and years later, he’s continuing to prove doctors wrong.

Now, as the Senior Manager of CIBC’s Inclusion and Diversity Team, Rose is drawing from his mother’s drive and his own personal experiences to ensure that his workplace has a positive impact within its own community. 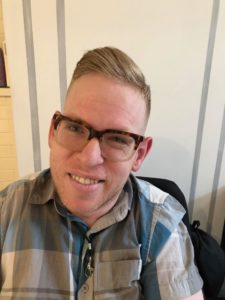 With that in mind, he says he’s more than excited to be a hero and wear his cape for Holland Bloorview Kids Rehabilitation Hospital’s annual Capes for Kids campaign. Each year, thousands of fundraisers band together to wear their capes across the city: on their commutes, to school, or even while pumping gas, in order to raise funds for kids and youth with disabilities. Since its launch in 2017, Capes for Kids has raised a collective $2,450,000 to fund vital programs, research studies, and education opportunities, at the hospital.

“I wouldn’t be the man I am today without Holland Bloorview. Around twenty, twenty-five years ago, I was the child playing in the ball pit and going to appointments, and now I have a chance to give back,” he says.

“For me, to think about being able to raise money in order for the next generation of kids with disabilities to turn into advocates and activists—or even senior managers at banks like me—that really excites me.”

And with CIBC as one of this year’s sponsors for Capes for Kids, Rose is eager to spearhead his organization’s fundraising ideas. Currently, he and his team are working to use CIBC’s internal platform to encourage staff to participate.

“We have always been an organization that prides itself on its community involvement and I think there are lots of opportunity for us to get involved as we have such an engaged employee base,” he says.

And while the COVID-19 pandemic has pivoted most activities and forms of connection, Rose is eager to see the new virtual avenues this will open for the campaign. From hosting virtual fundraising events to launching various social media campaigns, Capes for Kids is still able to soar—safely and socially-distant—thanks to some creativity. Personally, for Rose, he’s planning to illicit some laughs by hosting a virtual charitable comedy show.

“With everything being virtual, there are some great accessibility advantages to that, particularly in the winter months, as people with disabilities often can’t go outside because of issues such as snow removal,” he says. “There are going to be some really great and exciting opportunities to change the way Capes looks!”

For people with disabilities, like Rose, campaigns such as Capes for Kids, are crucial—not only for the kids who visit Holland Bloorview, but in order to create a stigma-free world—especially during a pandemic.

“For many children and families with disabilities, there are more limited resources right now. In addition, there is such a strong need for a sense of community,” says Rose. “I believe Capes for Kids can help address that gap.”

You can join Rose and thousands of others as they fill that gap and join forces with Holland Bloorview.

From March 1 to 7, wear a cape wherever you go—whether that’s to the grocery store, during a Zoom call, or while hosting a virtual trivia night. Kids with disabilities need your help now more than ever. Be a hero and join a community that pushes boundaries to create a world of possibilities.