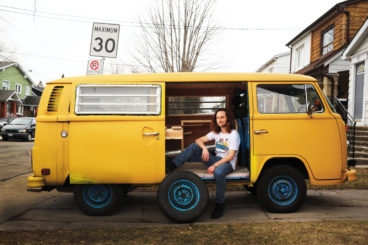 He traded the stationary life for a pan-American adventure

Think your micro-condo is small? Try living in a van. The soaring price of real estate is one factor spurring Torontonians to give up the stationary life, but they’re also chasing the freedom and romance of the open road. And they’re far from alone. At last count, #vanlife had over three million posts on Instagram. It started as a social media– and nostalgia-fuelled minimalist movement and has grown into a vast community of boho bloggers. In this Toronto Life series, we spoke to some recent converts about the highs and lows of going mobile.

In spring 2011, I was living in my parents’ house in East York, and I wanted to drive to Burning Man in Nevada that summer. One day, I was scrolling through Craigslist and came upon a baby-blue ’79 Volkswagen Transporter listed for $4,000. Since the van was over 30 years old, I expected it to be rusty, but the body was in fairly good shape. It used to be a panel van, but one of the previous owners put in rear windows, which I liked. I put in an offer of $3,000, and the seller accepted.

I wanted the van to be fit for camping and chilling, so I built an L-shaped couch that seats six and a fold-down bed that sleeps two to three people. I also removed two of the rear windows and replaced them with some Volkswagen Westfalia jalousie camper windows for airflow on warm nights.

After Burning Man, I left the van in Toronto and travelled through Asia for a year and a half. I was still living with my parents, and I’d saved some money from doing freelance web development gigs. When I got back to Toronto in the spring of 2013, I planned a pan-American tour. But first I needed to upgrade the van. I overhauled the braking system, replaced the tires, and installed a 40-watt solar panel so I could charge my electronics and tether my phone. I also replaced the driver’s and passenger seats with plush, antique BMW seats, which I found on Craigs­list for $50 each. I often joke that the entire van was built from Craigslist.

It didn’t come with a kitchenette, so I bought a two-burner stove, an assortment of pots and pans, and other cooking accessories. There was no toilet, but I figured I could stop at 24-hour restaurants and gas stations. I keep an emergency bottle in the van in case I wake up in the middle of the night with a full bladder.

When I travel, I usually park at the beach, or a Walmart parking lot, where there’s free Wi-Fi and 24-hour bathrooms. They generally let people in RVs or vans stay overnight without any problems. The rest of the time I’ll couch-surf, rent Airbnbs or stay at campgrounds, where there are showers.

I’ve had a lot of adventures. Once, in Colombia, someone tried to break into the van at 3 a.m. I’d picked up a machete along the way to chop up firewood and open coconuts, so I tapped on the window with the machete, and he ran away. At the end of my trip, I shipped the van from Buenos Aires to Mexico, which only cost $1,000—less than what most people pay for rent.

Now I spend summers in Toronto at my parents’ house, and once the winter hits, I’ll hop in the van and head south to Mexico City, where I work remotely. With van life, I still maintain a daily routine, but I also get to change up my environment on a whim—I carry everything I need wherever I go. Living out of a box on wheels might feel like a jail cell to others, but for me it’s freedom.

His travels: a random sampling 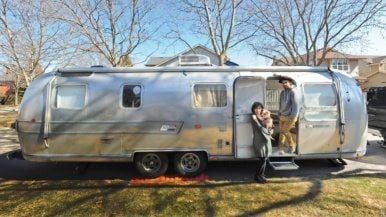 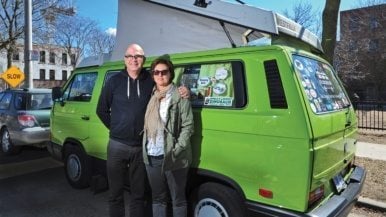 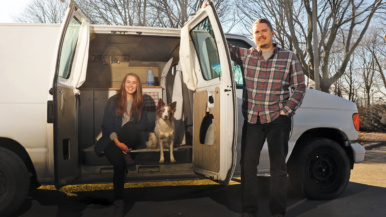 They live at Bloor and Ossington in the winter, but during the spring and summer they hit the road