Meat in moderation is sound advice not only for the health of our hearts, but for the environment as well. All the more reason to source those precious quantities from these best-in-class butcher shops, their display cases brimming with well-marbled hand-cut rib-eyes, freshly stuffed sausages, Frenched lamb racks, whole marinated chickens in a universe of flavours, and out-there delicacies—crocodile sliders, anyone? Here, our picks for the city’s best places to shop for your next Sunday supper or barbecue session—the first in a 10-part series on the city’s 100 best food shops. 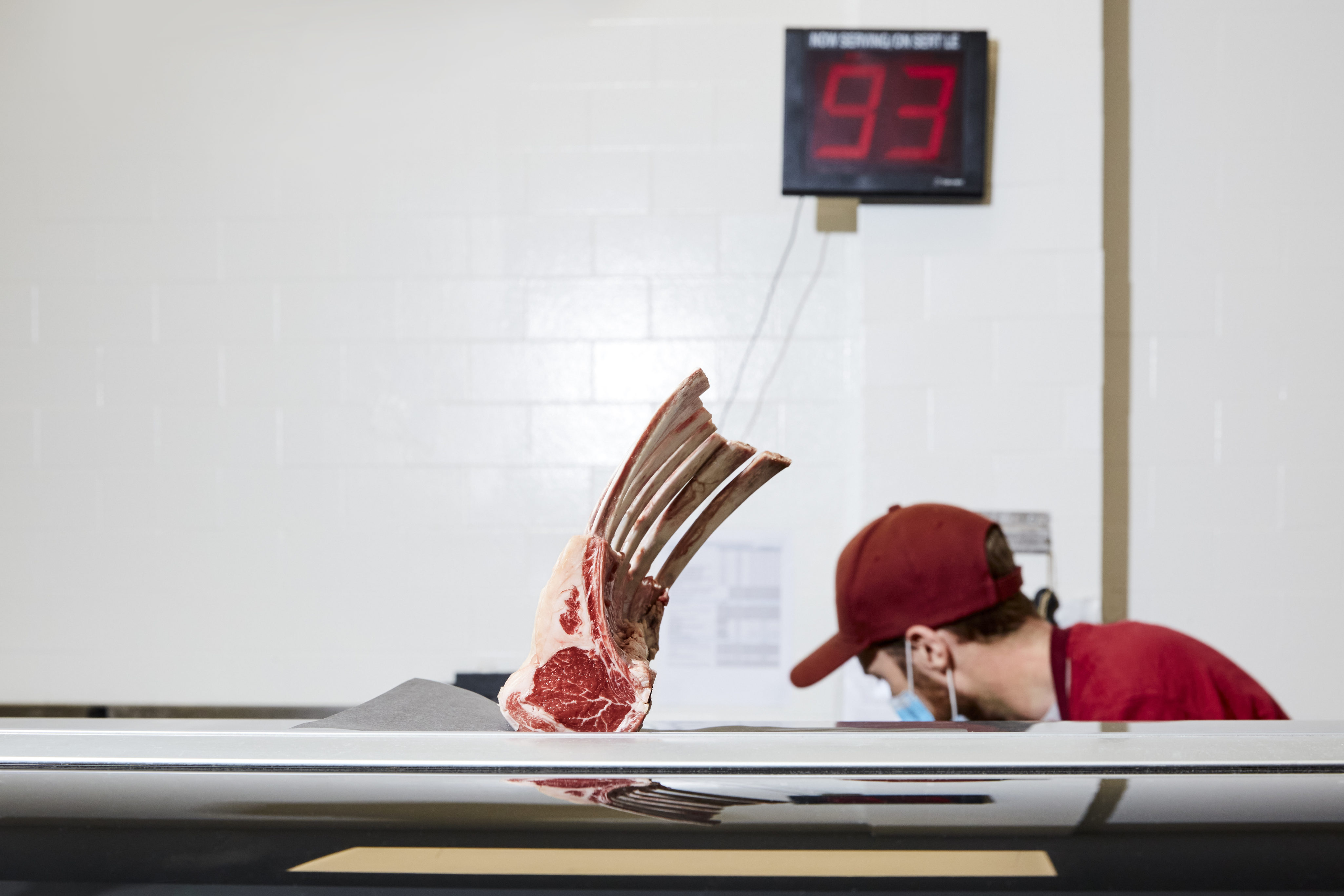 When Peter Sanagan opened his tiny Kensington butcher shop in 2009, he faced competition from older, bigger establishments that dominated the marketplace. Yet by 2012, his business was booming, and he moved into the (much larger) European Quality Meats and Sausages space a few steps east on Baldwin, remaking the heart of the market. Today, Sanagan’s remains top-of-mind for nose-to-tail connoisseurs and weekend-warrior rib-eye grillers, and its reach now includes a satellite store in Little India. What hasn’t changed is Sanagan’s dedication to transparency. Everything—from lamb neck and bavette steaks to beef tongue (and cheek)—is labelled with the farm from which it was sourced. Sanagan knows the age at which the heritage Tamworth hogs he stocks are slaughtered, and the exact size of the Northumberland County acreage his 100 per cent grass-fed cattle graze on.

In the farm-to-fork era, a butcher shop is only as good as the producers that supply it. Third-generation butcher Stephen Alexander knows this and has staked his reputation on the relationships he maintains with small family farms across Ontario. (He even has a few farms of his own.) After nearly 30 years in the business, Alexander’s portfolio includes three Cumbrae’s locations (including one in the town of Dundas) and a stake in Stock T.C, midtown’s new food and dining emporium. His storefronts are like high-end showrooms for all things butchery, with slabs of wood and marble framing every pristine display case.

Although Cumbrae’s is known as a dry-aging pioneer, it deals in more than just eight-week–aged T-bones and striploins; the counters are stuffed with Berkshire pork roasts, Frenched Dorset lamb racks and plump piri-piri-marinated chickens. And the prepared food items—especially the 24-hour-brined chickens—are restaurant calibre. 714 Queen St. W., 416-681-1111, 1589 Bayview Ave., 416-485-5620, cumbraes.com

For generations, the Gasparros have made their living as meat cleavers—you could say butchering is in their blood. Brothers Pat and Nick are the most recent generation of born butchers. The two grew up in their dad’s eponymous Bloorcourt Village shop. When he passed away in 2015, the brothers took over and made the executive decision to change almost nothing. The narrow shop looks trapped in time—in the best way. They make few concessions to modernity—their online ordering system consists of little more than an email contact form—and that includes resisting the encroachment of anything factory-farmed. They were sourcing from small Ontario farms decades before the term “locavore” landed on everyone’s lips, and have been a holiday staple for generations of Torontonians in search of turkeys, capons and Christmas hams. 857 Bloor St. W., 416-534-7122, mybutcher.ca

In the world of butchery, few products are as revered as the near-mythical Wagyu beef and its even more rarefied cattle kin, Kobe. And when top Toronto restaurants go searching for the stuff, they turn most often to Seiko Ishiguro, who took a leap of faith and ditched her desk job for couture cattle in 2008. She now counts the likes of Alo and Hana among her clients. A few maxed-out credit cards and a steep learning curve later, her wee shop—hidden at the back of a J-Town stripmall just off the 401—has become Ontario’s premier importer of Japanese beef. On top of her prized Japanese cuts, her case is packed with Mennonite-raised chickens, Berkshire pork, as well as slightly more wallet-friendly Australian and American Wagyu options. 3160 Steeles Ave. E., No. 8, 905-475-5005, famu.ca

This summer, 46-year-old Olliffe went through its most recent reboot. Sam Gundy has given over the keys to VG Meats, a family-run Fisherville farm with a Simcoe abattoir that has already made inroads in Toronto through its Rowe Farms stores. Fans of this Summerhill staple, fear not: hand-cut meats and heritage breeds are still the norm, just as they were when Olliffe first opened in 1975. Game enthusiasts have good reason to shop here. Olliffe carries a wide assortment of fowl—pheasant, partridge, quail and multiple duck breeds—plus prime cuts of venison, elk and bison. Longer term, they’re also working with suppliers to breed smaller, better-for-the-environment cattle. “Cows have gotten so big that they’re ruining pastures,” says Cory Van Groningen, one of Olliffe’s new owners. “By selecting for smaller animals, we can cultivate healthier landscapes.” 1097A Yonge St., 416-928-0296, olliffe.ca

This east-end butcher, which recently added a Danforth shop to its Little India location, got its start in 2014, when three chefs—Tony Marinuzzi, BJ Verano and Jason Becker—left the restaurant business but didn’t want to stray too far from the kitchen. Stock-in-Trade is a shop for those who want something more than a nice striploin: there’s an emphasis here on underappreciated butcher’s cuts—a merlot steak, for example, which isn’t just a cut that pairs nicely with red wine—and international standards from presa to picanha. They source gorgeously marbled, deep-red beef from well-aged, grass-fed heritage cattle, and even the odd retired dairy cow (“vintage beef” is one of the latest trends in steak). And for those who want to understand how differences in farming techniques affect flavour, they offer sampler packs loaded with a variety of cuts and methods, for a DIY at-home tasting. For an even more hands-on experience, butchery classes are offered in store. 307 Danforth Ave., 416-461-2121, 1324A Gerrard St. E., 416-792-5059, stockintradeto.com

There are many purveyors under the St. Lawrence Market roof from whom you can buy a show-stopping steak, fresh sausages or a thick-cut pork chop. But none has the selection to match Whitehouse Meats, which sits at the centre of the market with a sprawling wraparound display case filled with product that goes far beyond the standard Canadian cornucopia. Owner Leila Batten sources the rarest of carnivore delicacies: kangaroo, ostrich and more. If crocodile sliders aren’t to your taste, the selection also includes such domestic game as venison, wild boar, pheasant and rabbit, along with top-shelf standards like milk-fed veal, bacon-wrapped filets and butterflied leg of lamb. 93 Front St. E., 416-366-4465, whitehousemeats.ca

Matthew Kumprey is, you guessed it, the son of a butcher. In 2011, he teamed up with chef Vito Rizzuto to open a store that offers the best from both their worlds: naturally raised local meats and restaurant-quality prepared foods. For a no-fuss dinner, try one of their Ancaster-raised free-run chickens marinated in a blend of oregano, rosemary and garlic. If you want to go even easier, their reheat-and-eat lamb shepherd’s pie is a standout. They’ll be expanding their square footage (and offerings) when they launch their second location next spring on Geary Avenue, which is slowly becoming one of the city’s top gourmet thoroughfares. 2055 Yonge St., 416-901-9414, thebutchersson.ca

This spinoff of the thriving Paramount chain—home to heaping hummus bowls and shawarma platters—has all the trappings of a boutique butcher shop, along with one of the GTA’s finest arrays of premium halal meat. Since 2012, Paramount’s two Mississauga outposts have been destinations for those in search of large cuts of goat or lamb—a whole roasted goat leg or smoked lamb shoulder are guaranteed to feed a crowd—along with an impressive assortment of marinated kebabs that are ready to be skewered and tossed over hot coals. (The coarse-ground Pakistani chapli kebabs are a particular specialty.) Marinated meats are another strength, with ready-to-cook chicken breasts and thighs draped in everything from Mexican carnitas spices to a savoury oregano-mustard marinade that goes with just about any type of cuisine. Add a few containers of Paramount mezze—hummus, baba ghanouj, labneh—for a complete DIY mezze feast. 4646 Heritage Hills Blvd., 905-890-1700; 6720 Meadowvale Town Centre, 905-813-7016, paramountbutchershop.com

Christopher and Sarah Terpstra opened Alimentari, their Italian gourmet shop on Roncesvalles, in 2017. Soon after, they set their sights a few blocks north for their foray into butchery. It’s a standout showcase for free-roaming heritage breeds from small Ontario farms. There’s a mix of cuts (dry-aged striploins and bone-in rib-eyes) and marinated meats like chimichurri flank steak, plus nearly two dozen kinds of sausage. And the porchetta—a specialty Christopher mastered while studying under legendary Tuscan butcher Dario Cecchini—is a must. 401 Roncesvalles Ave., 416-532-3490, russellsbutchershop.com