In a superfood-obsessed city like Toronto, soda is often thought of as little more than a source of sugar, empty calories and tooth decay. But comparing a cold-pressed celery juice or nut mylk to a can of pop is like apples to Orange Crushes. Soda doesn’t pretend to be anything but soda. Each sip sees the swirl of sugar, bubbles and childhood nostalgia converge in a powerful braid of indulgence for indulgence’s sake. Given everything else going on in our food scene, it’s easy to miss the fact that Toronto is a soda snob’s paradise. Here are twelve of the city’s most captivating carbonated beverages to indulge in the next time a craving strikes. 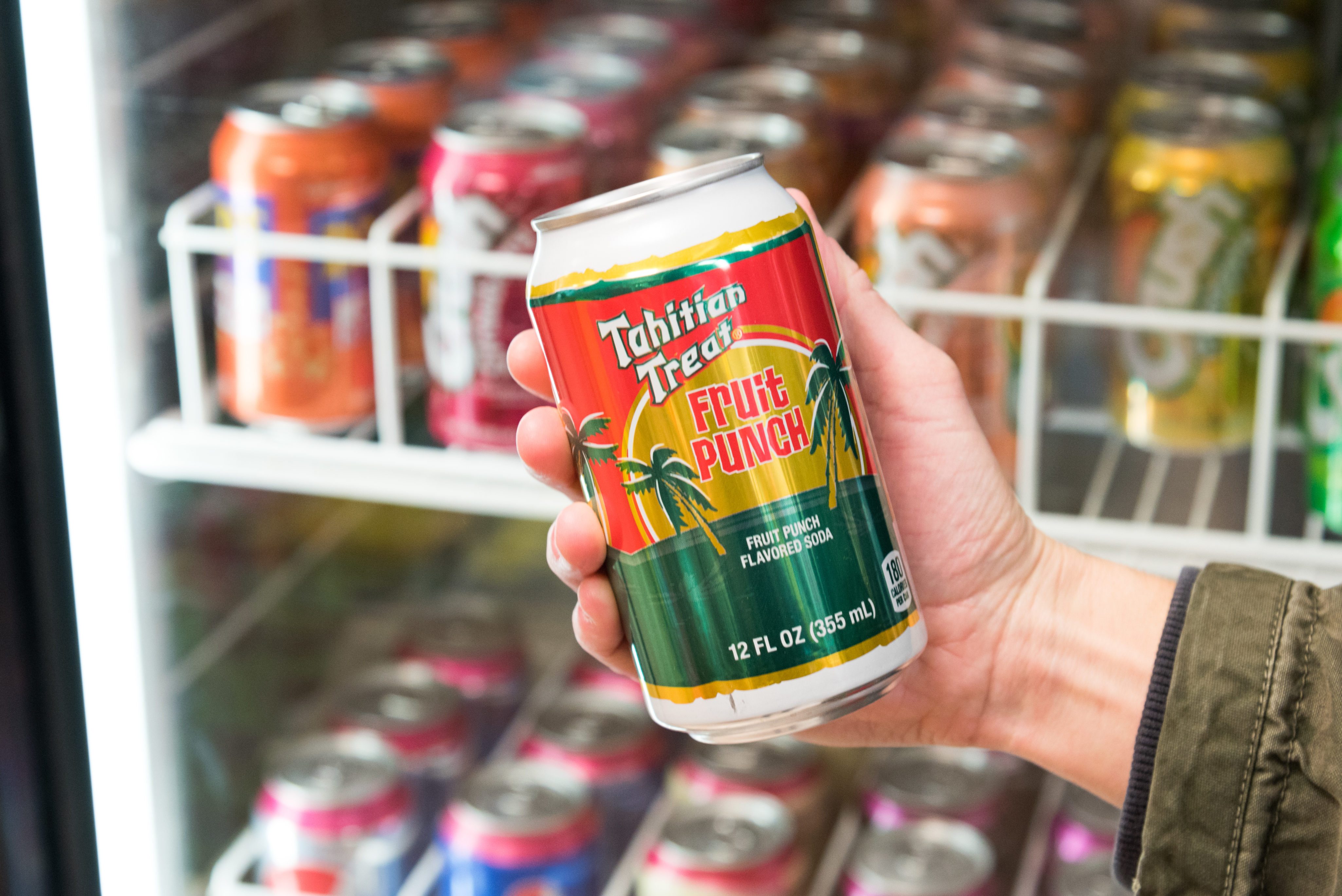 This punch-inspired fizz sings with the taste of maraschino cherries and candied lime. The soda’s mystique is heightened by its scarcity: it’s relegated to a select handful of corner stores and restaurants across the GTA. But those who manage to track down a can love it. Even Drake is a professed fan: “I used to hit the corner store to get Tahiti Treat,” he raps on “Weston Road Flows.” Find it at Extra Burger. 1357 Dundas St. W., no phone, extraburger.ca

Sealed with a marble ball stopper that requires some force to plunge open, each bottle of Ramune is like a mini shooting range for your fingertips. But our best advice is to skip the original version and jump straight to the highly evolved strawberry version. Lightly sweetened with a lick of cotton candy on the finish, every sip will leave you dreaming about ripe summer berries and trips to the CNE. Find it at PAT Central. 675 Bloor St. W., 416-532-2961, patmart.ca

One of the main complaints you’ll hear about pineapple Fanta is absolutely nothing, ever. With a juicy taste that captures the spirit of fresh pineapple without any of the stinging acidity commonly associated with the fruit, the beverage is a tropical vacation in a can. Find it at OJJJ’s Variety. 533 Manning Ave., no phone.

A regional soda from Mexico’s coastal Guerrero state, Yoli is a go-to beachside drink in the resort city of Acapulco. Inside each statuesque bottle, the clear soda is sweetened with cane sugar and a ripple of lemon concentrate. The finished product tastes like a less watery, highly improved version of Sprite. Find it at Latin American Emporium. 243 Augusta Ave., 416-351-9646.

Laced with a lingering floral character and an addictive fuzzy peach aroma, Tomomasu Inryo Hojun Hakuto (which translates to mean well-ripened white peach cider) is the gold standard to which all other peach sodas should be held. Inside each bottle the fleeting taste of ripe summer peaches is preserved for 365 days of the year. Find it at Nations Experience. 1980 St. Clair Ave. W., 416-767-5888, nationsfreshfoods.ca

If you’re looking to feel like you just took a dip in the Caribbean ocean without actually going anywhere, Grace Grapefruit Island Soda is it. The drink’s neon-green colour conjures images of a warm, tropical ocean. Meanwhile the soda bursts with bright citrus flavour and invigorating grapefruit scent. Find it at Golden Patty. 187 Baldwin St., 416-977-3191, Facebook

Mexican soft drink company Jarritos is no stranger to fruit-forward drinks. But while the company’s mandarin soda is good, and the lemon-lime is excellent, it’s the harder-to-find guava that truly shines among the other offerings. Each sip rings with the mouthwatering acidity of ripe guava, plus a lick of cream soda and ripe pear. Find it at Bulk Barn. 503 Bloor St. W., 416-927-7964, bulkbarn.ca

Brewed in small batches from the original 1920s recipe, drinking Stewart’s Grape Soda provides an experience to which few other grape sodas can compare. The intensely carbonated beverage tastes like what we imagine it might be like to have fairies carrying Concord grape jelly dancing on your tongue. This is further complimented by the soda’s luscious purple hue, which glows like amethyst when a bottle catches a ray of sun. Find it at Garden View Convenience. 252 Queen St. W., 416-593-2560.

A post shared by DarumaTeufelhunden (@darumateufelhunden) on May 26, 2019 at 6:12pm PDT

Brewed with malt, sugar and hops, Malta Goya is an alcohol-free South American malt beverage that’s occasionally enjoyed as a substitute for beer. But at 240 calories and 36 grams of sugar per 355 ml serving (the average 355 ml beer has just 150 calories) the experience of drinking Malta is vastly different from crushing a Coors Light. Each sip begins with the taste of molasses and sweetened bran cereal while the thick, caramel-coloured elixir melts like hot fudge over your tongue. Find it at Latin American Emporium. 243 Augusta Ave., 416-351-9646.

A solid contender for the best cream soda there is, Pakola is perfumed with the familiar scents of potpourri layered atop a backbone of vanilla. It’s imported from Pakistan where it’s typically used to make creamy mint coloured Pakola milkshakes but the fluorescent green soda is equally enjoyable on its own. Find it at Lahore Tikka House. 1365 Gerrard St. E.416-406-1668, lahoretikkahouse.com

Introduced in 1977 to offset the departure of The Coca-Cola Company from India, Thums Up is fizzier and spicier than regular Coca Cola with a distinct rum-like finish. It may be an acquired taste for anyone used to regular Coca Cola, but the cola’s intoxicating cardamom aroma is reason enough to try this irreplaceable Indian drink. Find it at MotiMahal. 1422 Gerrard St. E., 416-461-3111, motimahal.com