Jess Bell is a dog trainer by trade, but after a few years of photographing her own pets—an Australian shepherd named Cohen and an elderly chihuahua called Megatron—she made animal photography her full-time pursuit. She uses colourful powder to create a majestic, otherworldly effect, and frisbees to send dogs flying through the air. Here are some of her favourite shots. 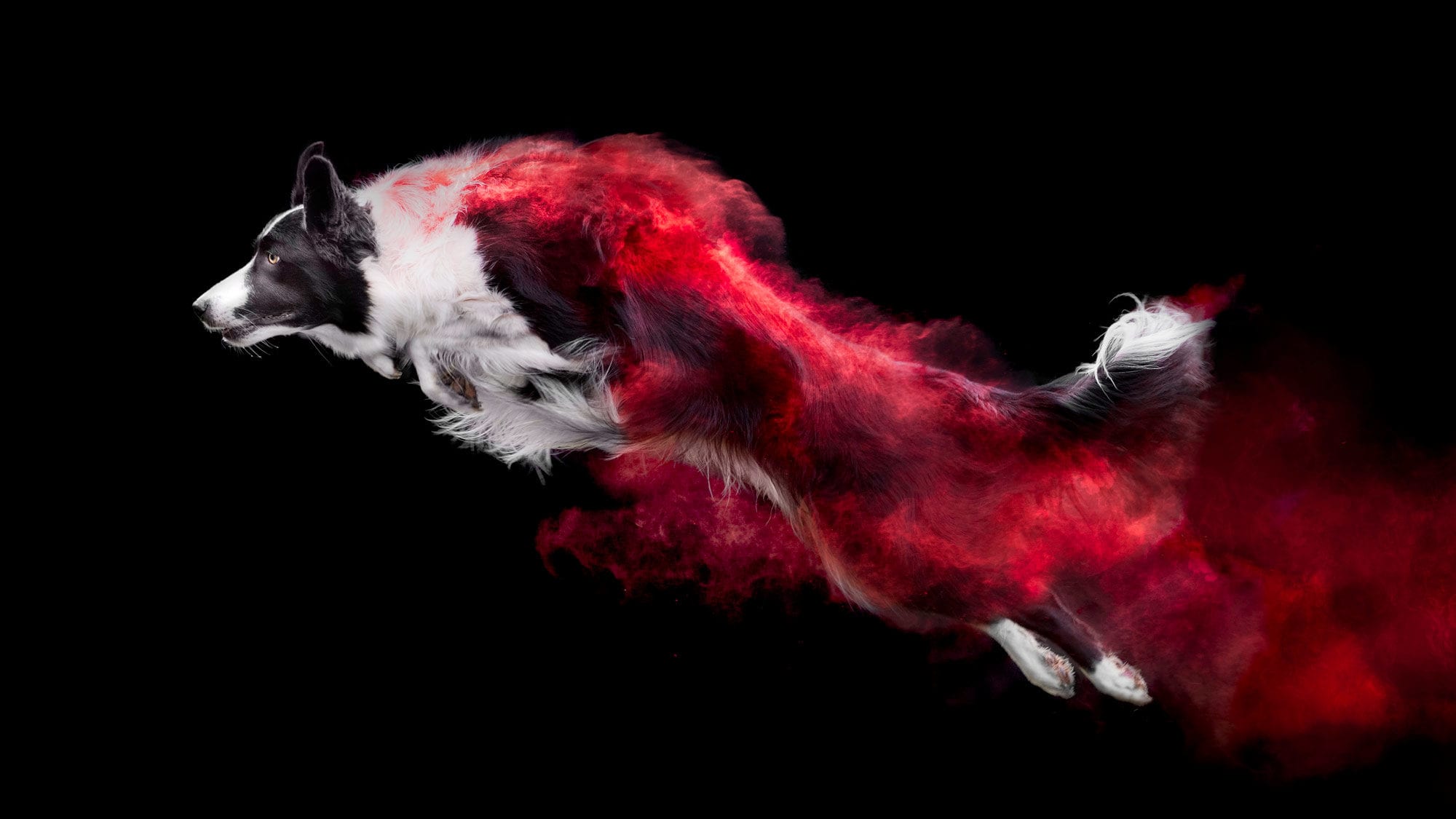 Inspired by Andrea Zachrau, a German equestrian photographer who captures horses running through colourful clouds of dust, Bell shot a series of dog powder portraits. She sprinkles powder on their backs and gets them to hold still until she can get her camera in position. Then, she cues them to jump over an obstacle toward a toy or treat, sending the powder flying off behind them. This photo features Rush, a well-trained border collie. 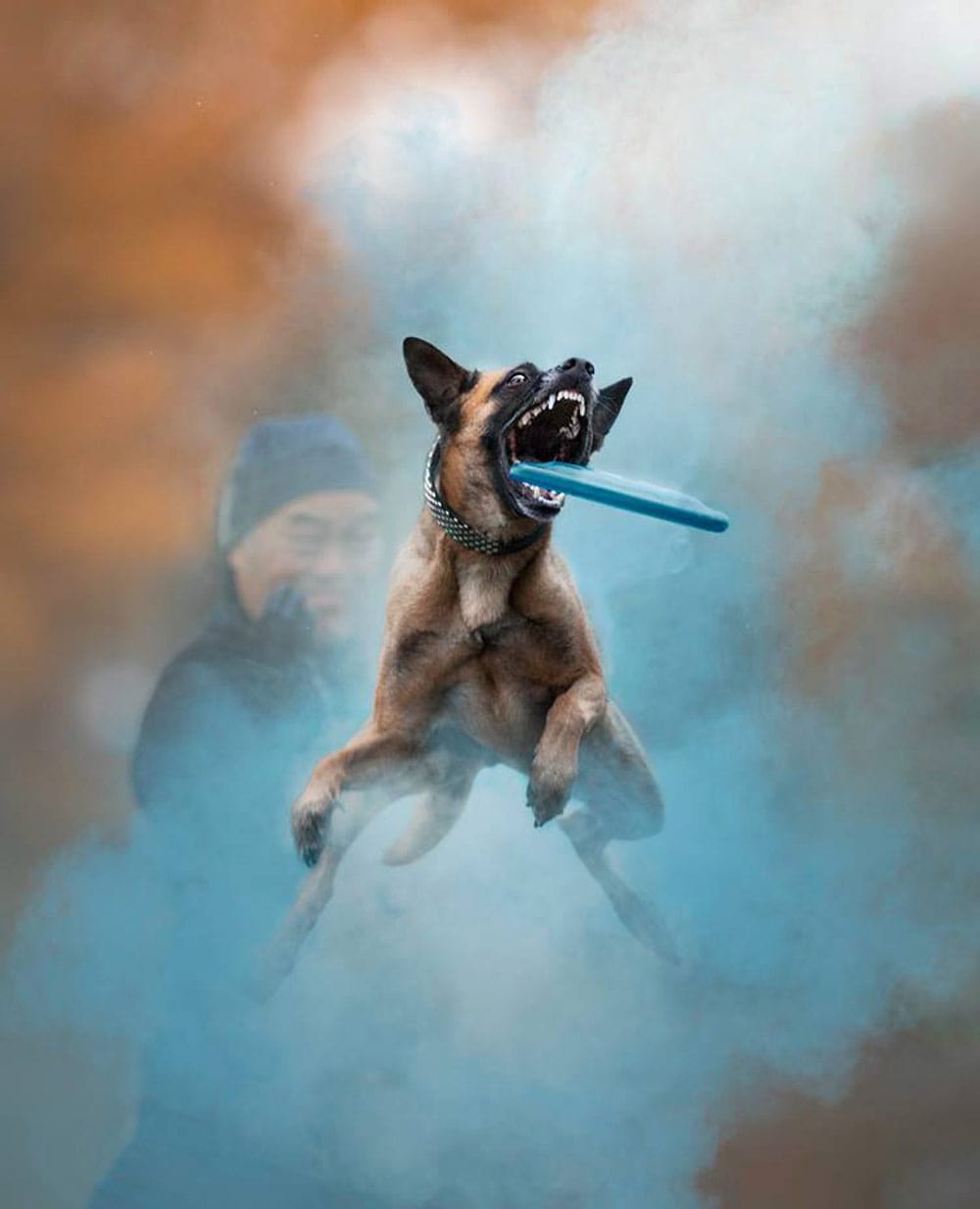 Bell incorporates powder in different tricks, like this frisbee catch with Mercy, a Belgian Malinois. The owner threw the frisbee toward the camera and Mercy leapt off her knee to catch it. Bell shoots with a zoom lens, which keeps her from getting hit by flying objects or trampled by excited pups. “Sometimes I do find myself in the midst of the action or waist-deep in water, and I just hope something doesn’t go awry. So far, so good,” she says. 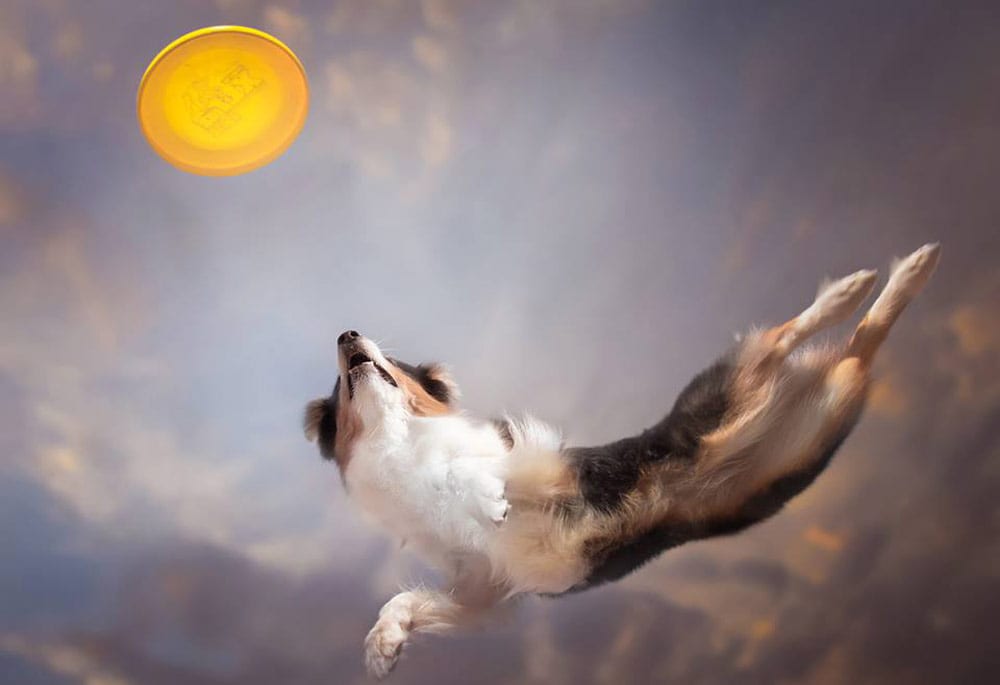 Bell’s Australian shepherd, Cohen, was one of her first subjects. She took this photograph in a park across the street from her home in Scarborough. Her husband threw the frisbee, Cohen leapt to catch it, and Bell lay on the ground to capture the jump from below. In the end, she didn’t get her perfect shot, so she photoshopped the frisbee in after. 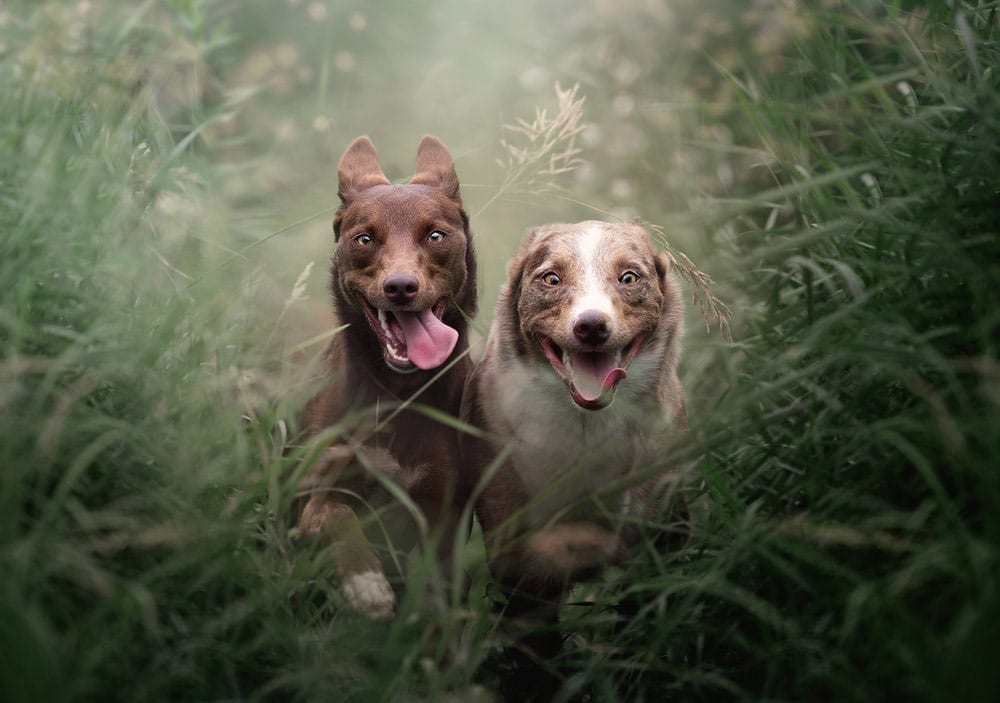 Australian koolies Billie and Ned (also known as Billabong and Nedbury) are a happy-go-lucky pair. The shoot was essentially a game of monkey in the middle: the dog owner stood on one side of the path, her mother stood a few feet away and they took turns calling Billie and Ned back and forth. They’re fast runners, and it was difficult to capture both of them in perfect focus, so the final image is a composite of three shots. 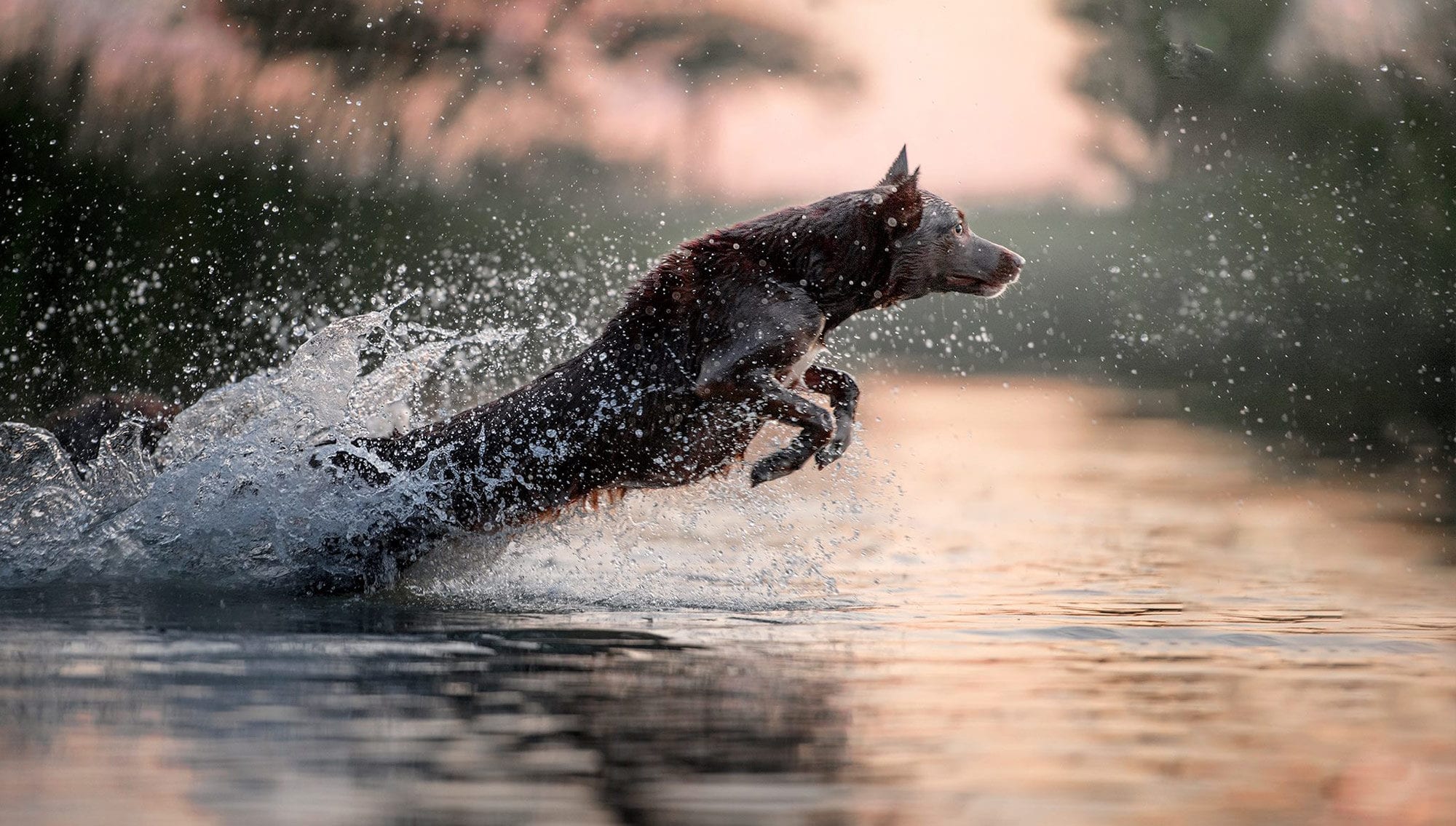 During the same shoot, Bell and the owner took the dogs to a pond at sunset. Billie darted into the water after his ball and Bell captures the action. There are no composites here—it’s just an incredibly well-timed photo. 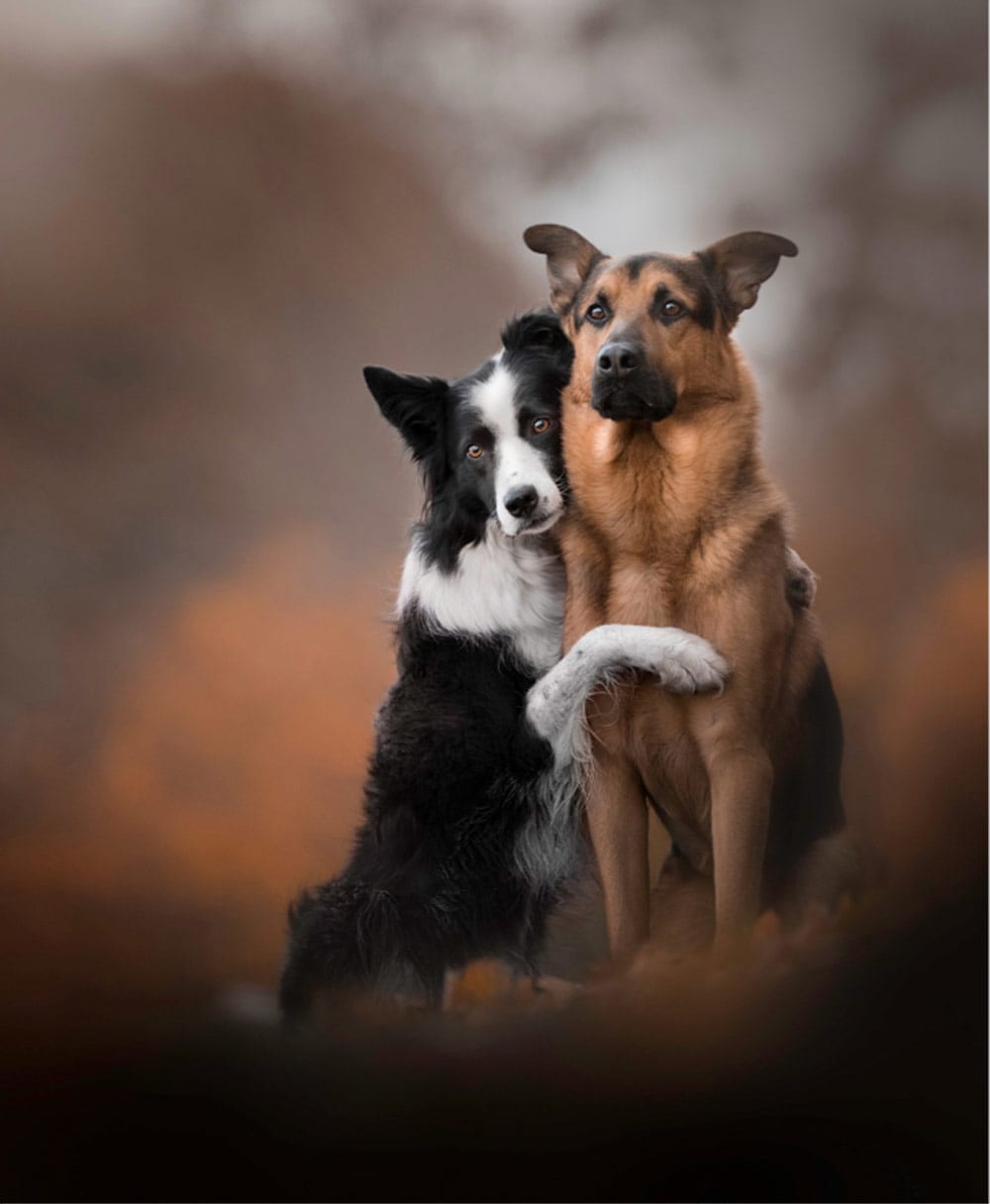 These two rescue dogs, Lottie and Grizzly, belong to a trainer who taught them this adorable trick. 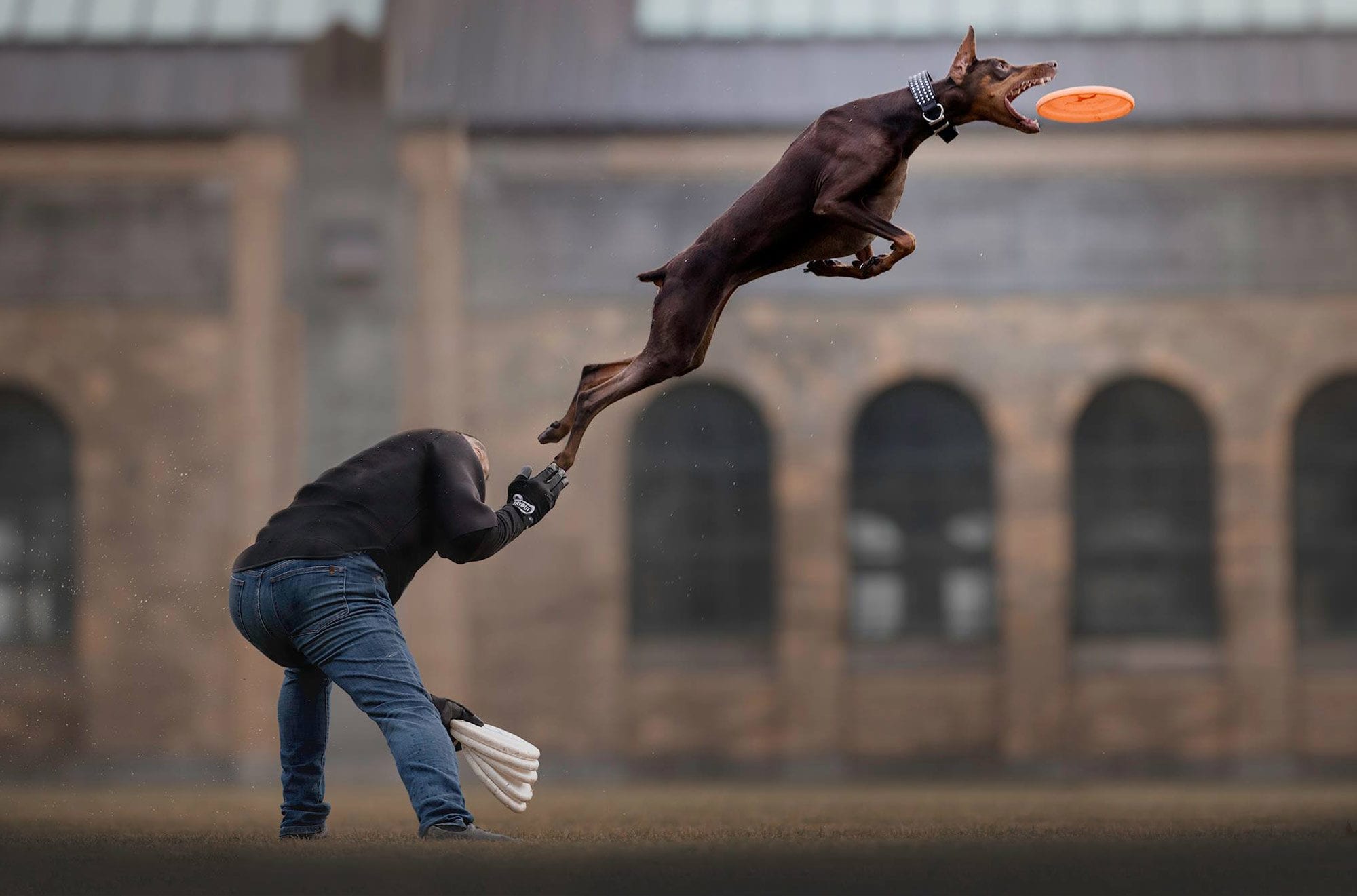 Bell’s background as a dog trainer comes in handy during shoots. In this photo, Karma, a Doberman pinscher, is performing a vault. The dog starts on the ground, leaps onto her owner’s back then jumps even further into the air. Karma’s owners even brought special frisbees that read, “Karma’s a bitch.” 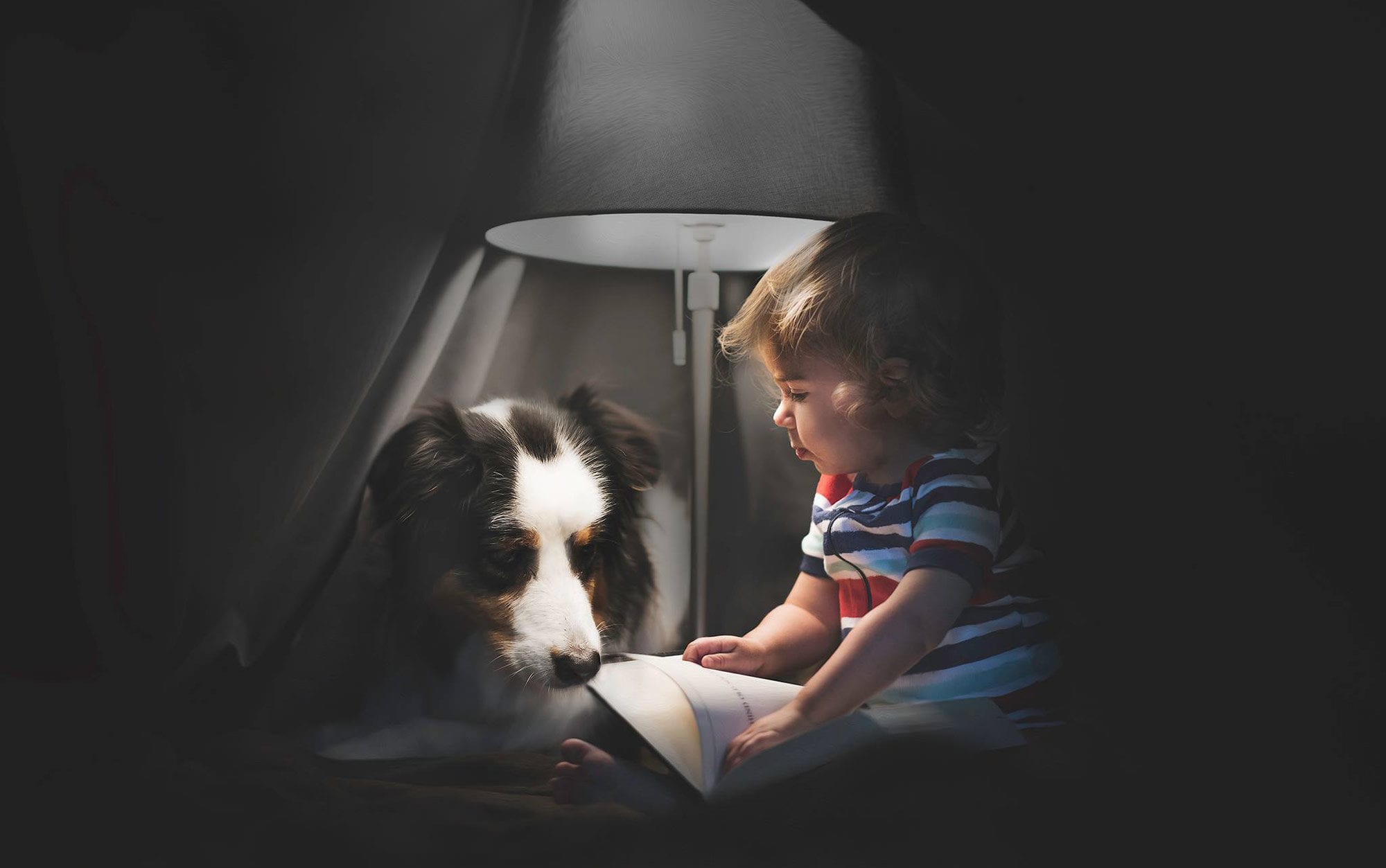 Here’s another shot of Cohen with Bell’s daughter, Morrigan. Since her daughter was born, Cohen has taken a photo of the two together every month. Dogs and babies are challenging subjects, she says, since they tend to move around a lot. Here, she used a handful of kibble to keep Cohen in position.