In his paintings, the Toronto-born artist Stephen Appleby-Barr blends the real and imaginary, creating dreamy, fantastical new worlds populated by real people he’s met during his travels through Germany and the U.K., where he now lives. For his latest series, Appleby-Barr has been building intricate scale models of trees and buildings as reference points to enhance the backgrounds of his portraits. Here are some pieces from his latest solo exhibition, on display at Nicholas Metivier Gallery until December 6. 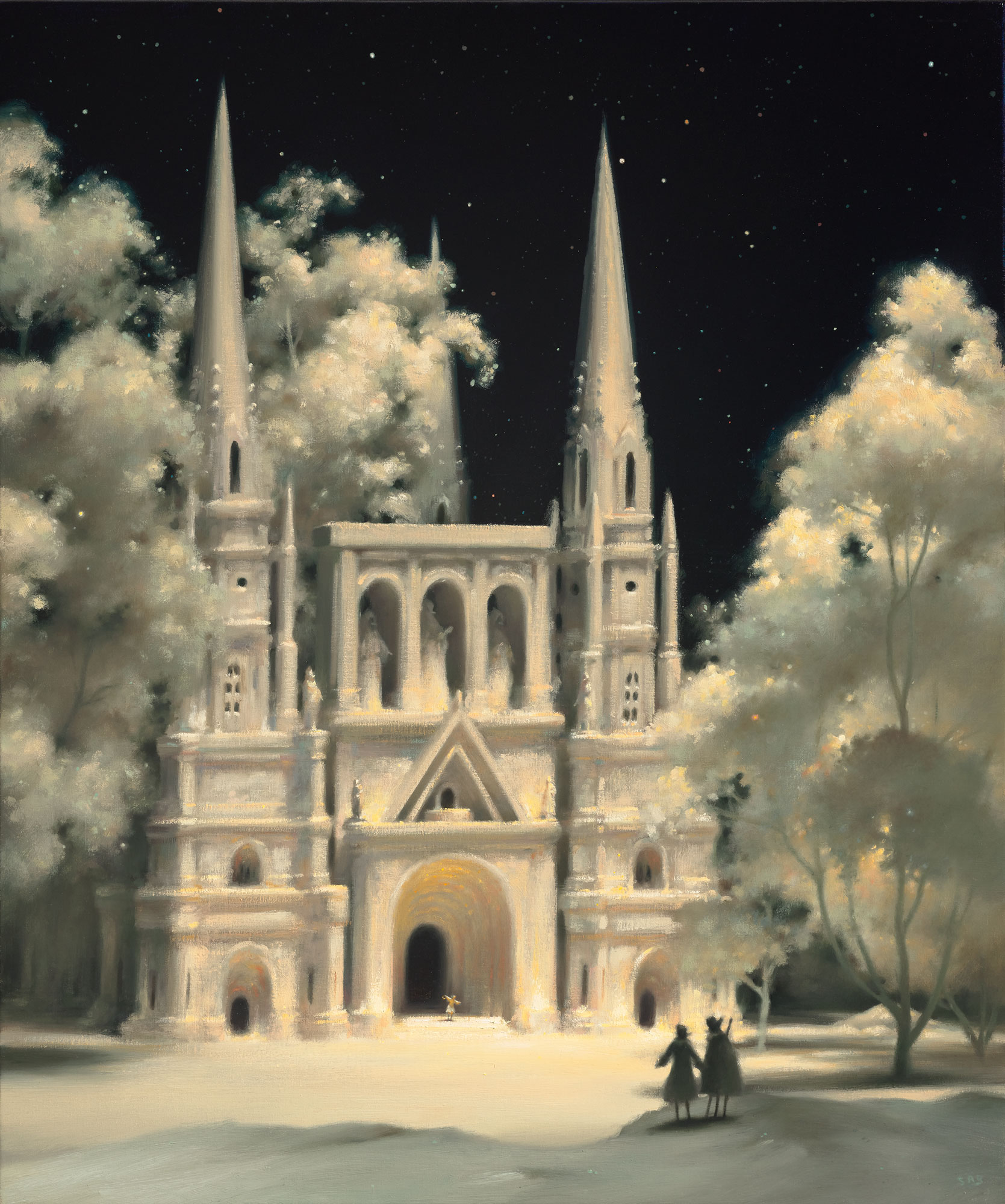 In artspeak, “staffage” refers to the use of small figures used to show the scale of structures in a painting. It was often used in 18th- and 19th-century art, and Appleby-Barr learned about the concept from his wife, Cody, who works at the Sir John Soane Museum in London. Regardless of the building’s prominence, he says, viewers tend to look at the people in the paintings first. This painting was one of Appleby-Barr’s first attempts at using scale models, in this case to replicate spires and arches, of which there are no shortage in Berlin and London. 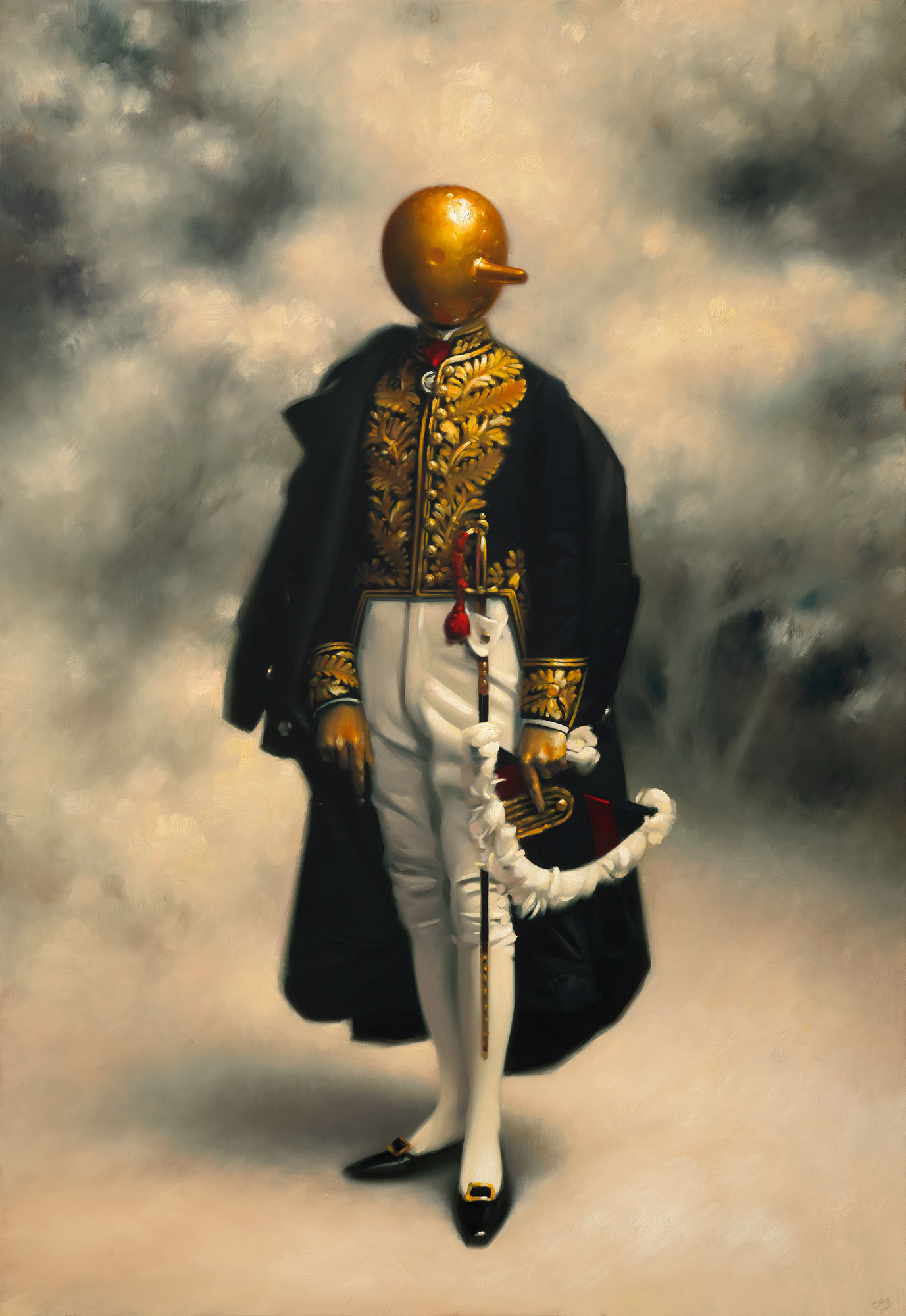 Solomon in the Garden

After reading Neal Stephenson’s Baroque Cycle fiction series, the character based on Solomon—a biblical king who is said to have owned a gold mine—stayed with Appleby-Barr. Stephenson’s character is an alchemist, so Appleby-Barr decided to paint his head as a gold sphere. Appleby-Barr used models of miniature trees that he created to build the detail in the garden behind Solomon. 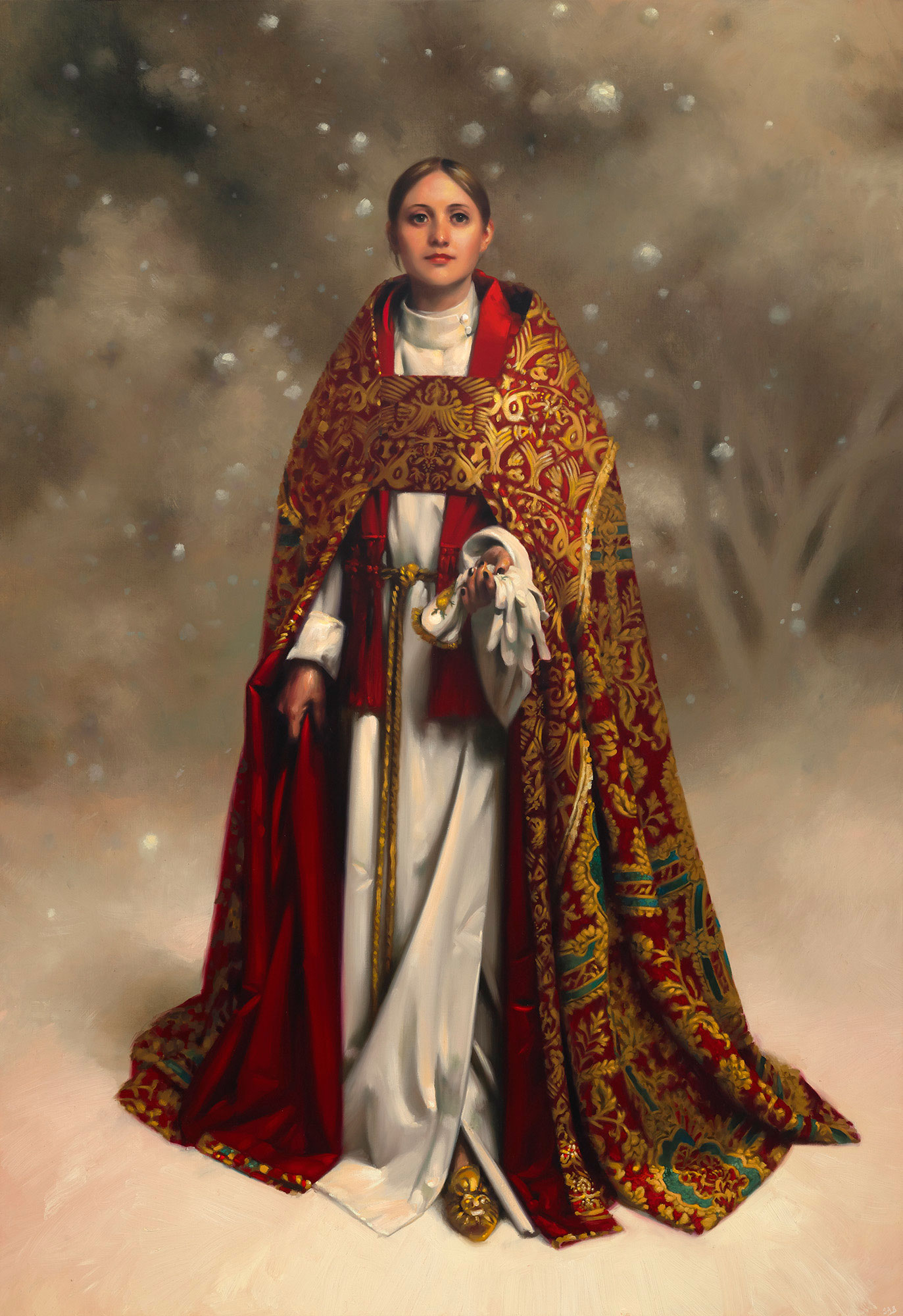 Genna, a new London acquaintance of Appleby-Barr, loves fashion, and one of her style icons is Jude Law’s character in The Young Pope. They went to the National Theatre costume archive and discovered a brocade robe, which became the inspiration for Genna’s look. She also included some elements from her own outfit, such as her gold Salvatore Ferragamo flats. 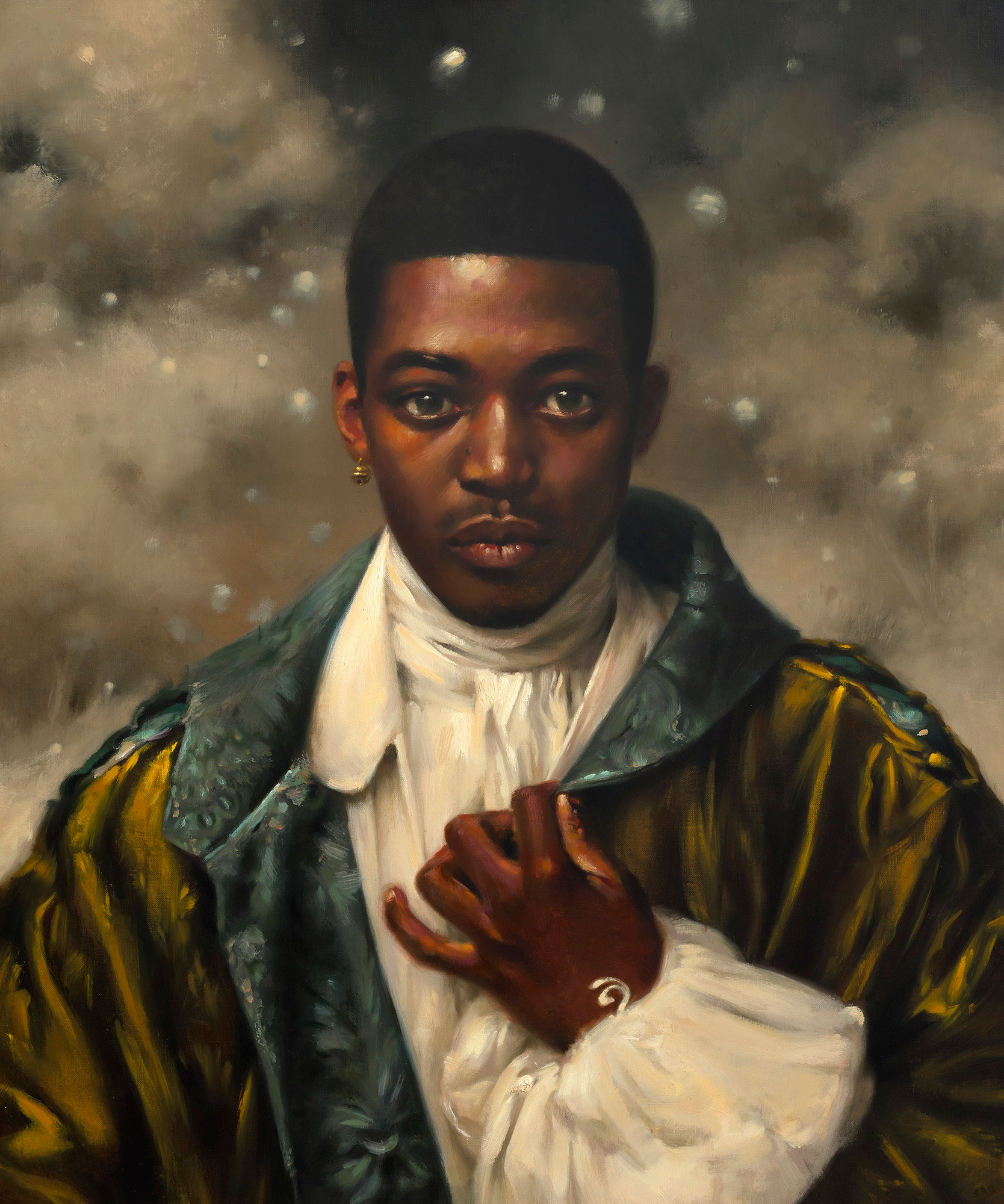 Appleby-Barr was leaning out his first floor window one night and there was Amz, a model for Mowalola and A Cold Wall. Amz was outside taking a breather before returning home for the night, and they struck up a conversation and shared a cigarette. They kept running into each other so Appleby-Barr proposed that they try a portrait. 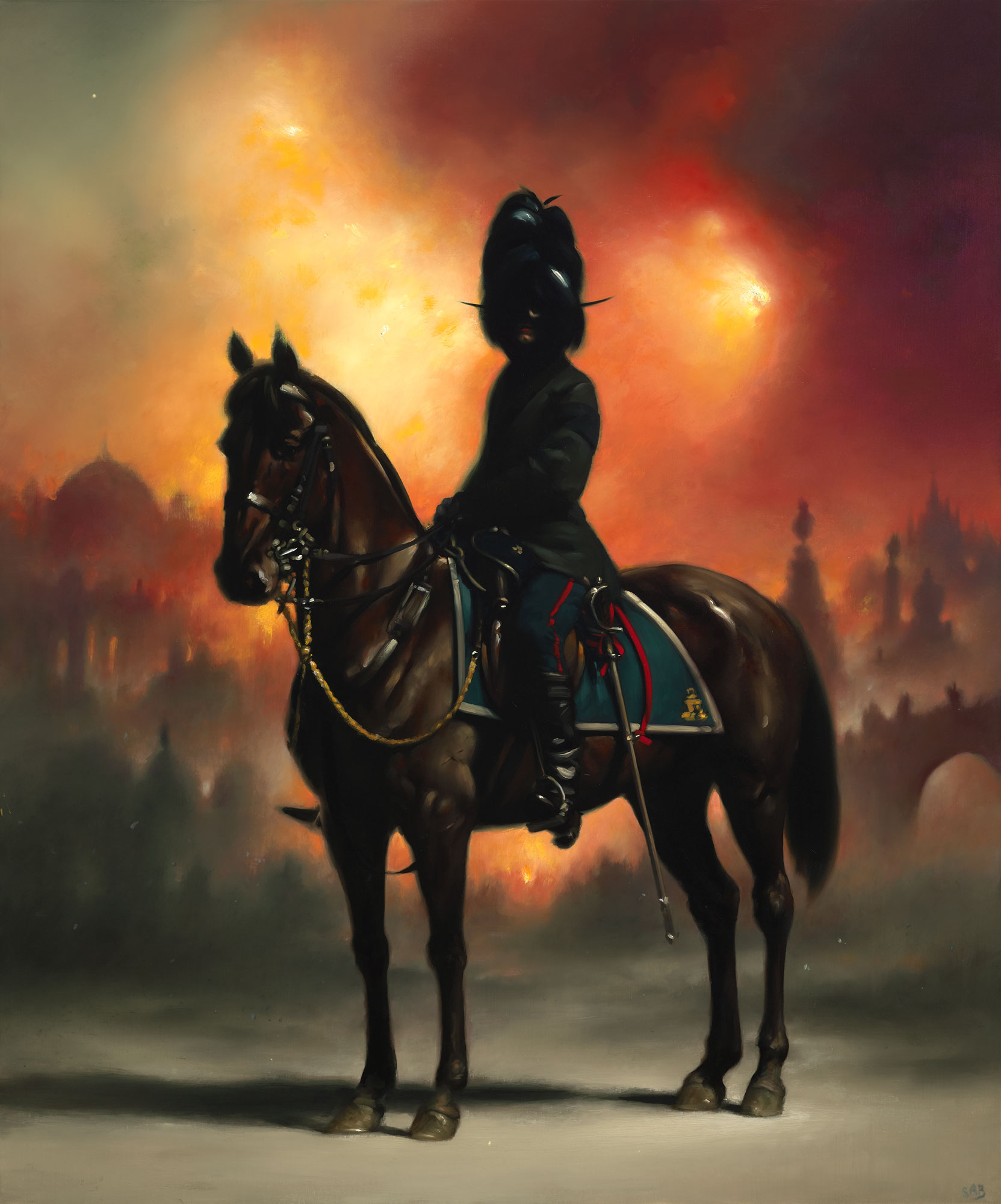 Dark Messenger with a Burning City

Appleby-Barr feels as though there is so much going on in London and Berlin that the cities are almost engulfed in flames—an image that is repeated throughout this new body of work. The Dark Messenger in this painting comes to the city bringing news, but maybe he is too late. 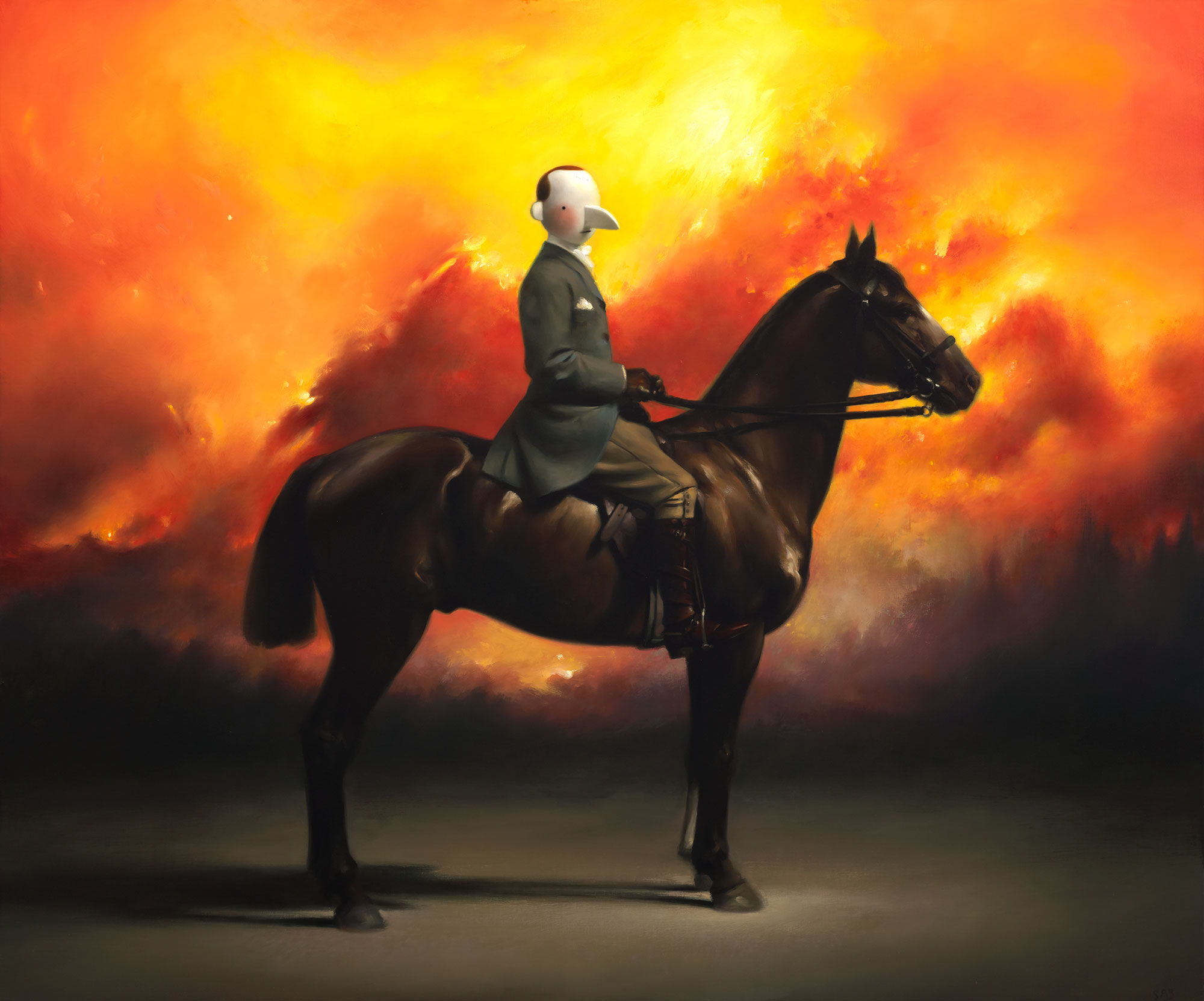 Pantyhose with a Mountain of Fire

Appleby-Barr’s first character, Pantyhose, which he has been sketching and painting since college, returns on a steed in the burning city. The contrast of Pantyhose, with a muted colour scheme, impassive face and stoic horse, up against the raging fire was an irresistible opportunity for Appleby-Barr. 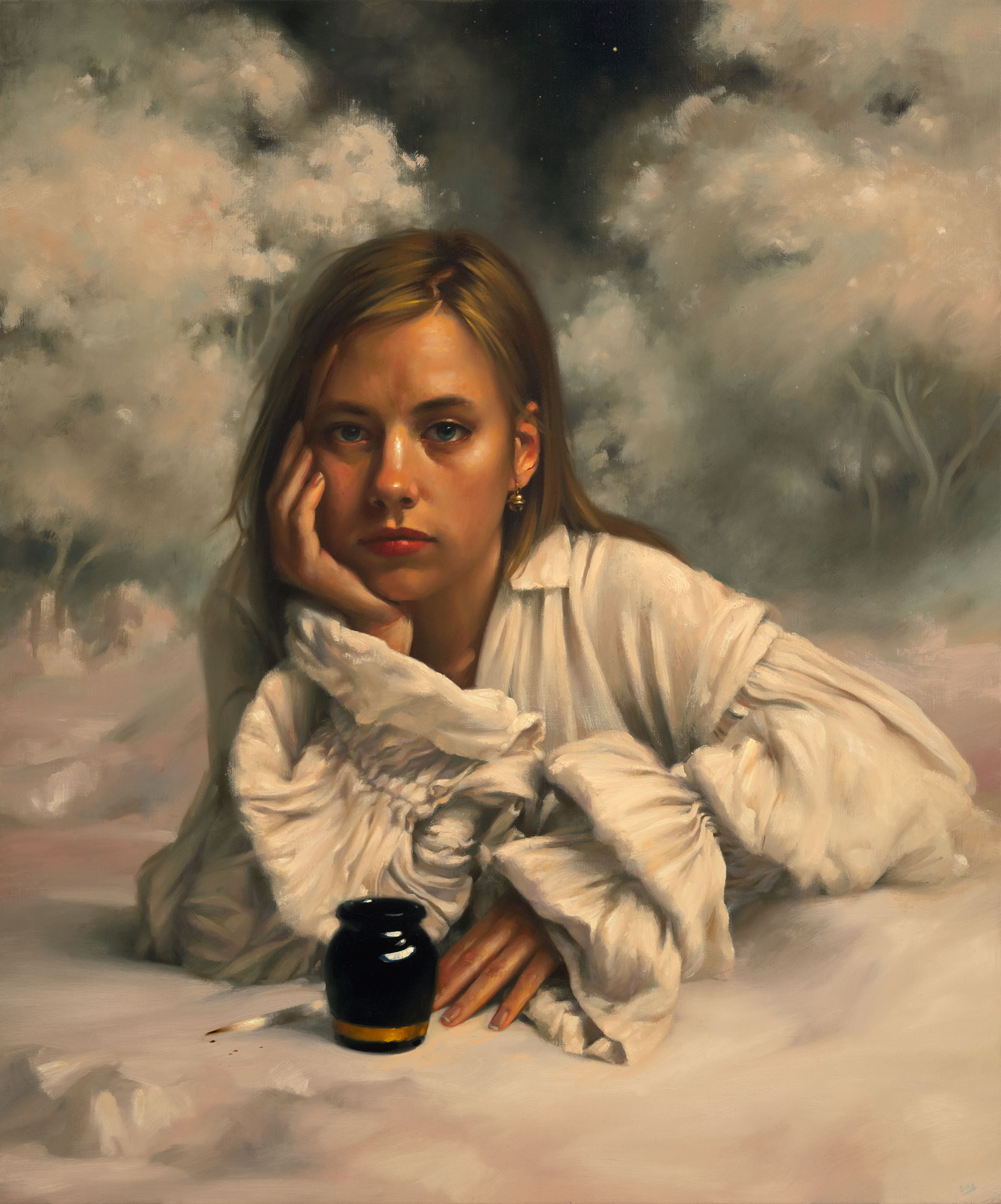 Josefine was Appleby-Barr’s first friend in London. A writer, she would also work on her own, so they formed a partnership and often work together. They scour the city for quiet places to work. “I’m always reading her drafts so in this pose it’s as if she’s waiting patiently for her notes.” 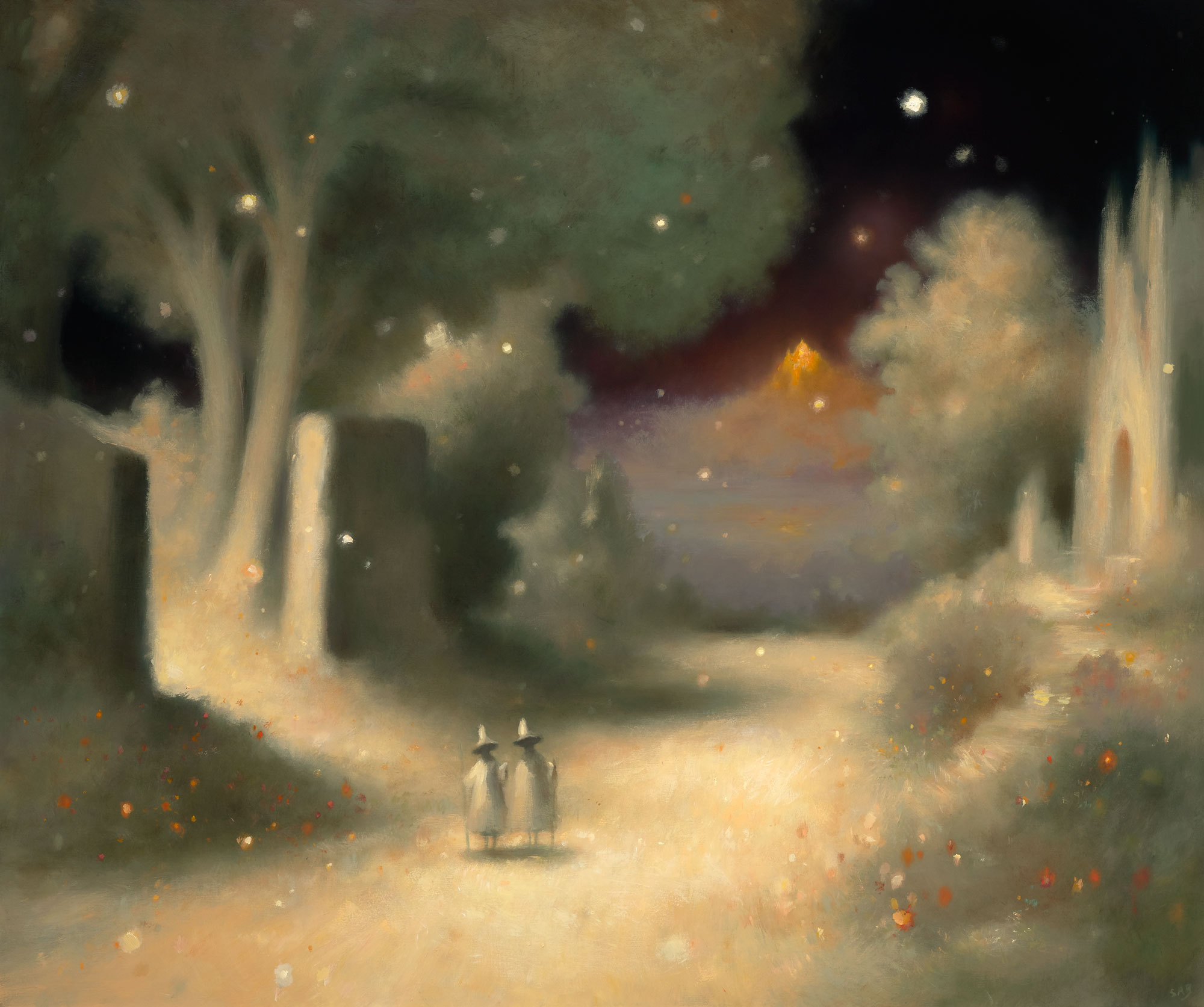 The Anatomy of Trees

Josefine and Appleby-Barr take a lot of walks through wooded areas, before sitting down at cafes to work quietly. Also reading a manual by Rex Vicat Cole called The Artistic Anatomy of Trees, the idea for this painting came to Appleby-Barr naturally. “I began to conflate the growth of trees to the states that arise when creating work,” he explains. He wanted to create a painting that shows the special quality that his conversations with Josefine have. 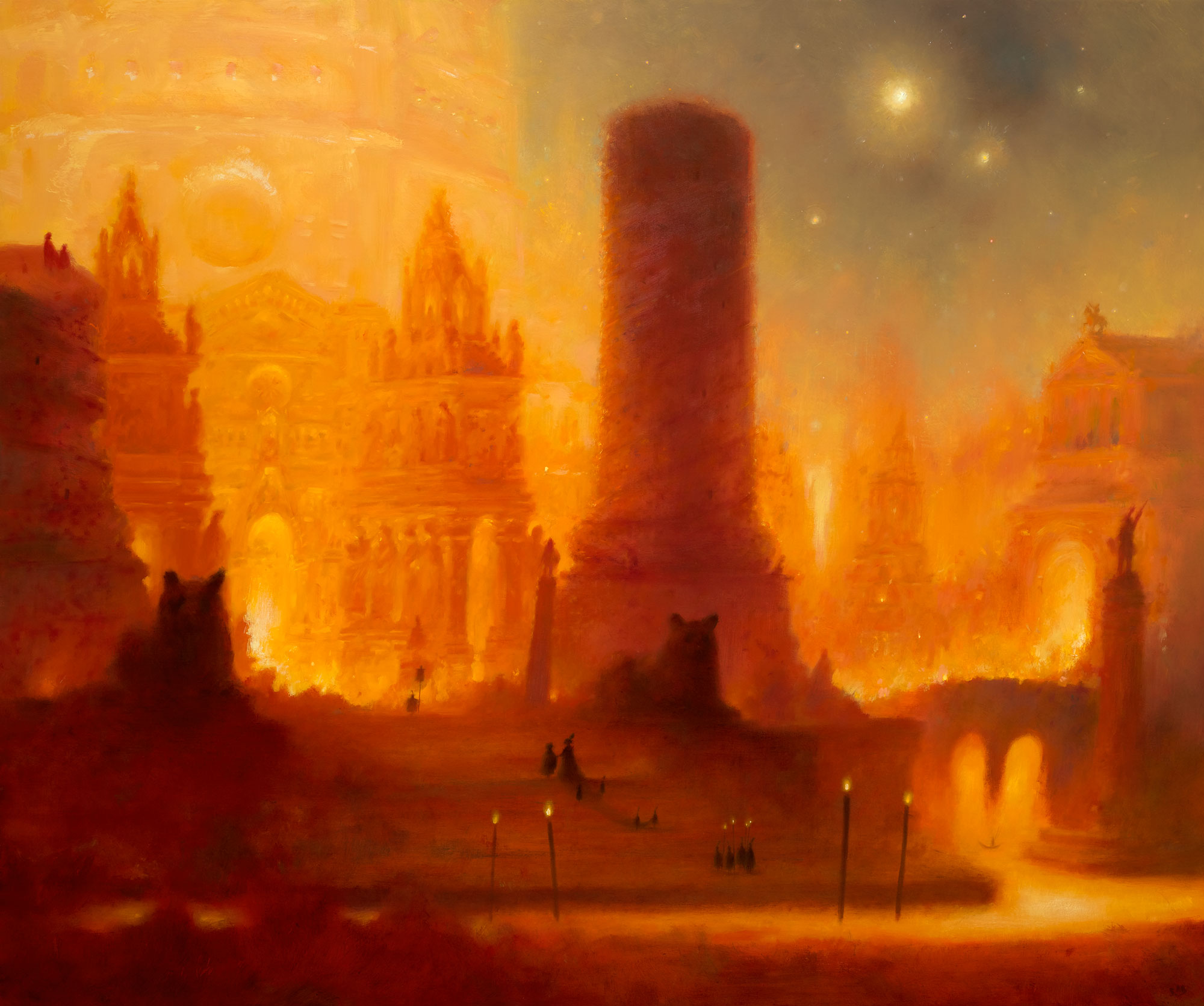 Procession is a companion piece for The Anatomy of Trees. You can see the burning city from afar in the image of Josefine and Appleby-Barr taking a walk, and in Procession, you’ve arrived. Living in London has been such a shocking transition for Appleby-Barr that he needed to paint the way he felt—it ended up involving a lot of raging fire.