Q&A: Anthony Ricciardi, the colourblind financial analyst who quit his job to become an artist

Q&A: Anthony Ricciardi, the colourblind financial analyst who quit his job to become an artist 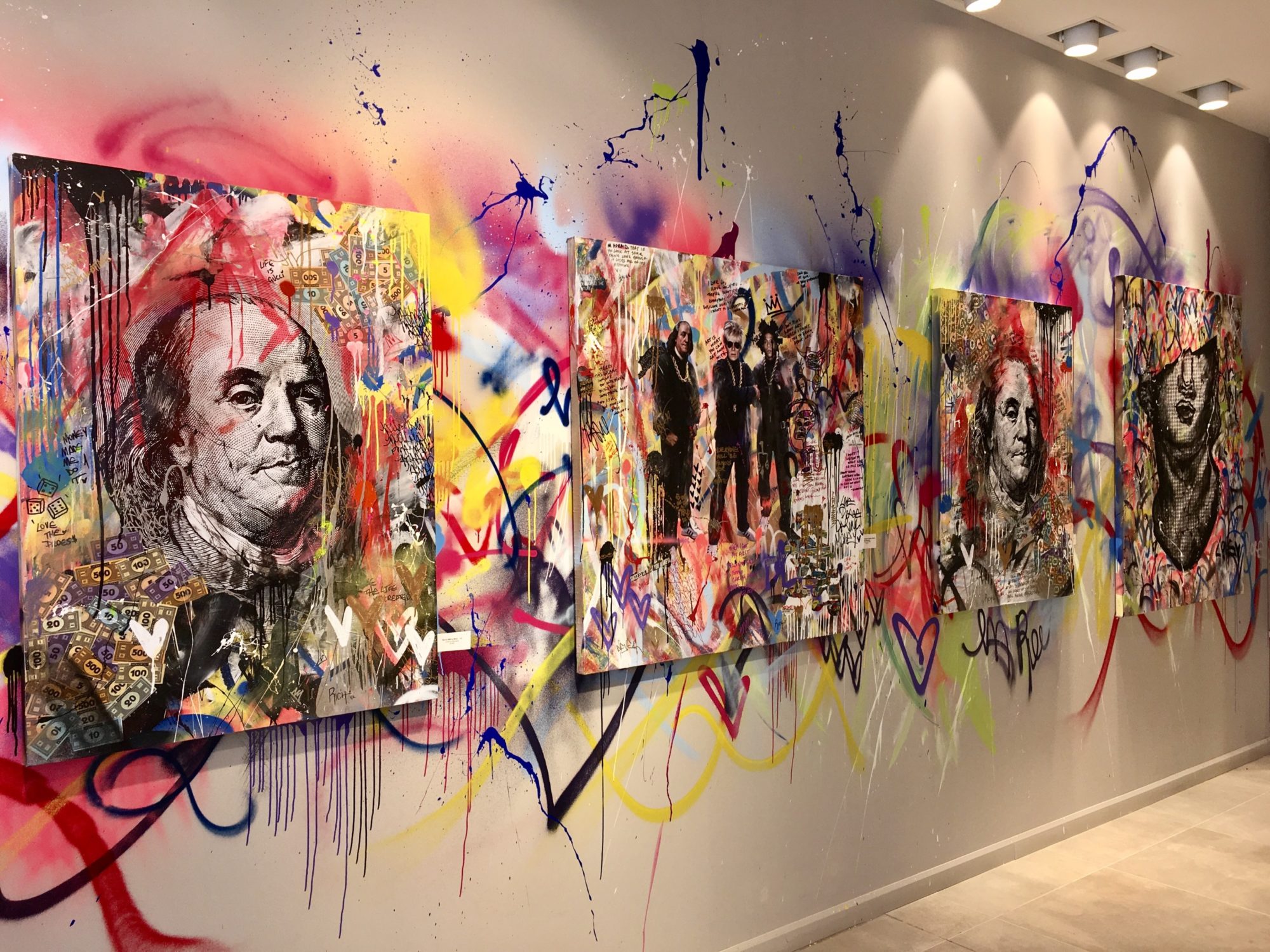 Anthony Ricciardi isn’t a typical artsy type. He went to university in Alabama on a baseball scholarship and spent more than three years working as an analyst for an investment fund. Oh, and he’s completely colourblind—something that doesn’t stop him from creating vivid works of art splattered in neon hues. His latest exhibit, Less Isn’t More, is on display in a pop-up gallery at Yorkdale until October 27. We caught up with the artist to chat about his career change and what it’s like creating art when you can’t see colour.

Less Isn't More at Yorkdale!!! I am beyond excited for this, can't wait for everyone to see!

How did a finance guy like you get into the art world?
I’ve been painting my entire life, but usually just on the side. I held my first show two and a half years ago at a small gallery in Yorkville, and after my second show last year on Ossington, bigger opportunities started coming my way—like murals in New York, Chicago, London and L.A. I had to keep turning them down because of my job. In February this year, I had a great opportunity to do a mural in New York and I wasn’t able to take the time off. So I quit the next day. I was 25 and thought, If I don’t do this now, I never will. Since then, I’ve been travelling around the world painting murals. I’m doing my next solo show in Miami in December. It’s been a whirlwind. 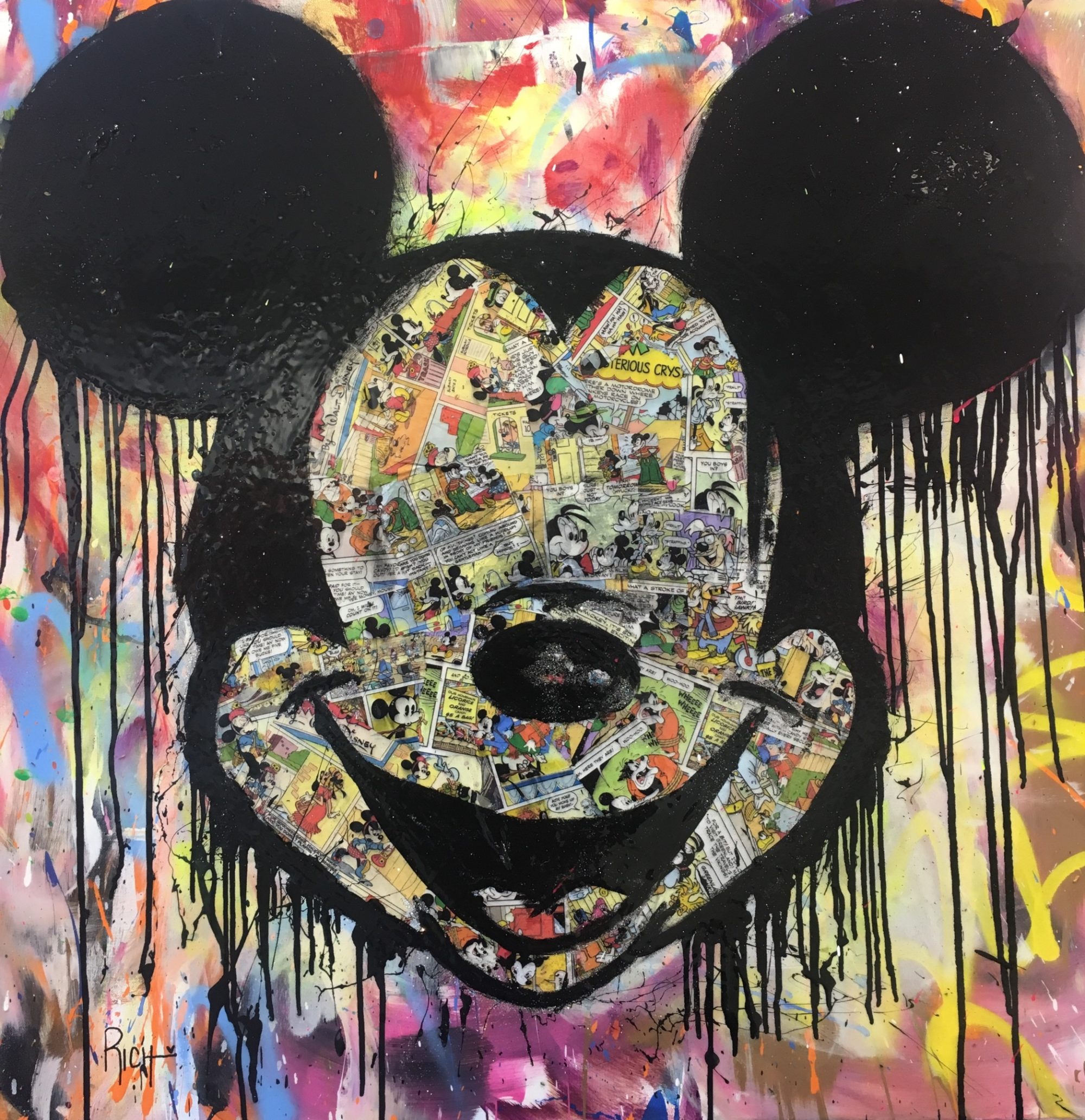 You’re colourblind. Can you appreciate the results of your labour?
I’ve been colourblind my whole life, but as I’ve gotten older, I’ve been able to relate colours to one another. Now, for instance, I know for a fact that the sky is blue and a stop sign is red, but they still look similar. I thought I overcame my colourblindness a few years ago, but I did a test and the doctor was like, “Yeah, you’re still completely colourblind.” When I paint, I can read the colours on the can. But once I layer another colour on top, I won’t be able to see the first colour. So blending colours is impossible for me. I’ve ruined so many paintings by making them muddy. Now, I work in layers, which is why my paintings have so much depth. Anytime I lay on a colour, I wait for it to fully dry before adding another. If I want the original colour to show, I’ll carve back into it.

It sounds like a long process.
It usually takes two to three days to complete a painting. But I work on multiple paintings at a time. For instance, I’ll do all the yellows on five different paintings at the same time. I usually do a base layer, a second or third layer, and then add all my writing and texture. Finally, I’ll add any recognizable imagery on top of that. 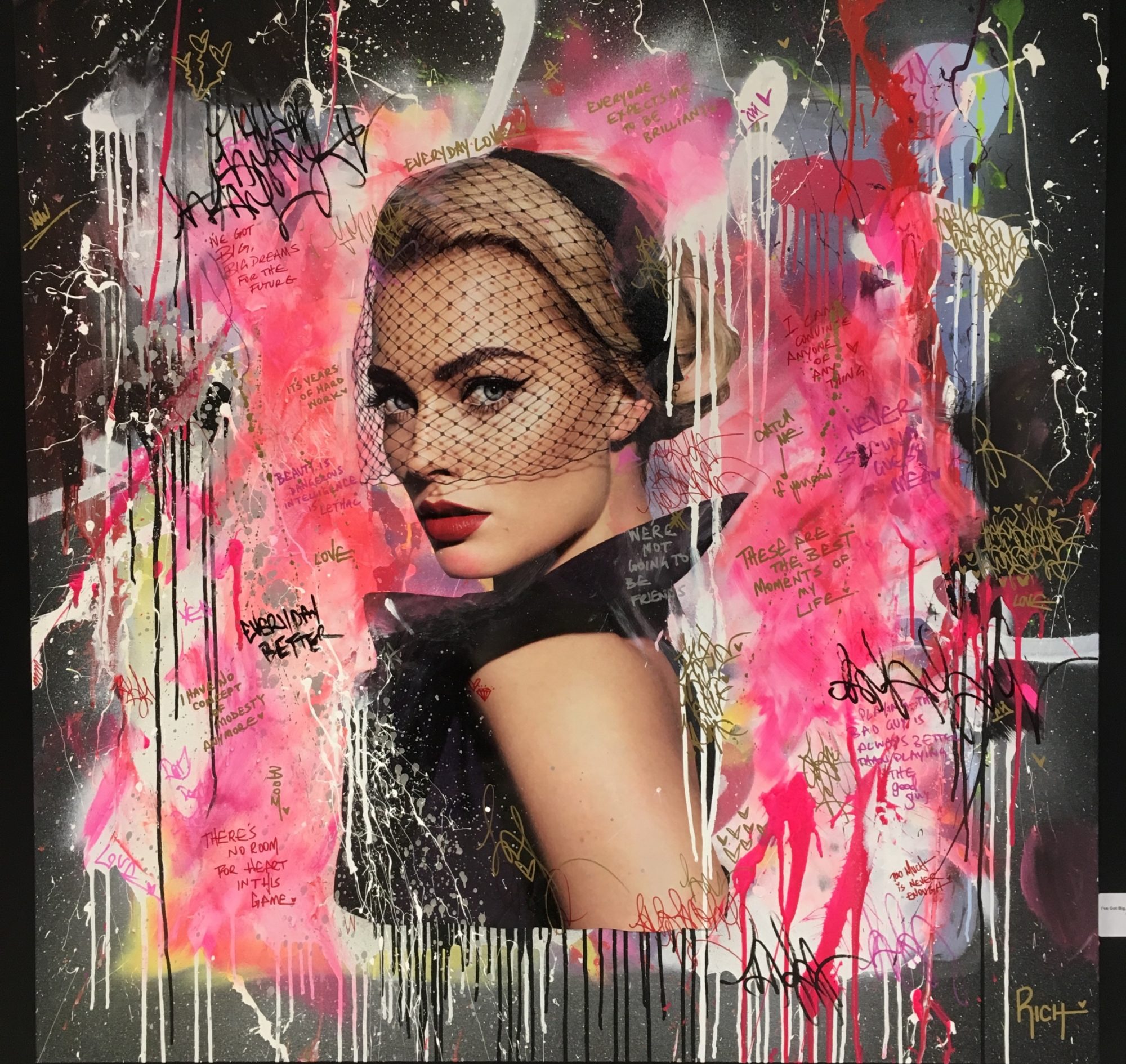 You have a distinctive style. Tell us about it.
I use a lot of comic book clippings and vintage articles from magazines. To me, working with larger-than-life characters and superheroes takes me back to when I was a kid and thought I could do anything. I also like putting unexpected twists on pop culture references. For instance, I covered a portrait of Benjamin Franklin in Monopoly money. But I don’t try to make any political statements. It’s playful. 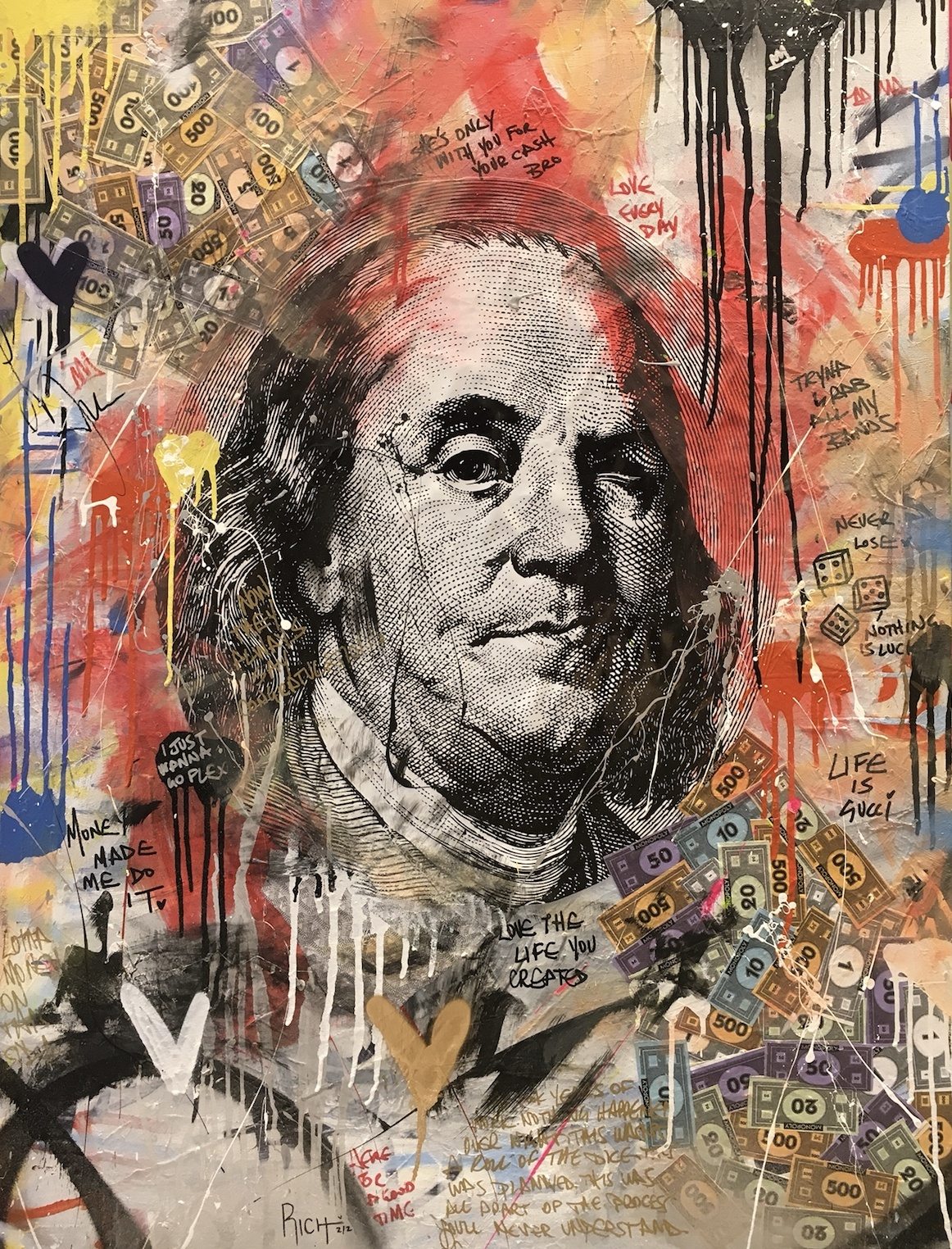 Who else appears in your works?
I like to use a lot of recognizable celebrities, but if I’m using Audrey Hepburn or Marilyn Monroe—people who’ve been done by artists a thousand times—I try to find the most obscure pictures of them, or paint them differently. I depicted Audrey with a gun because it’s so aggressive and beautiful at the same time. The imagery around that piece is made up of vintage Life magazine articles about a bunch of crazy and beautiful things that have happened in the world. 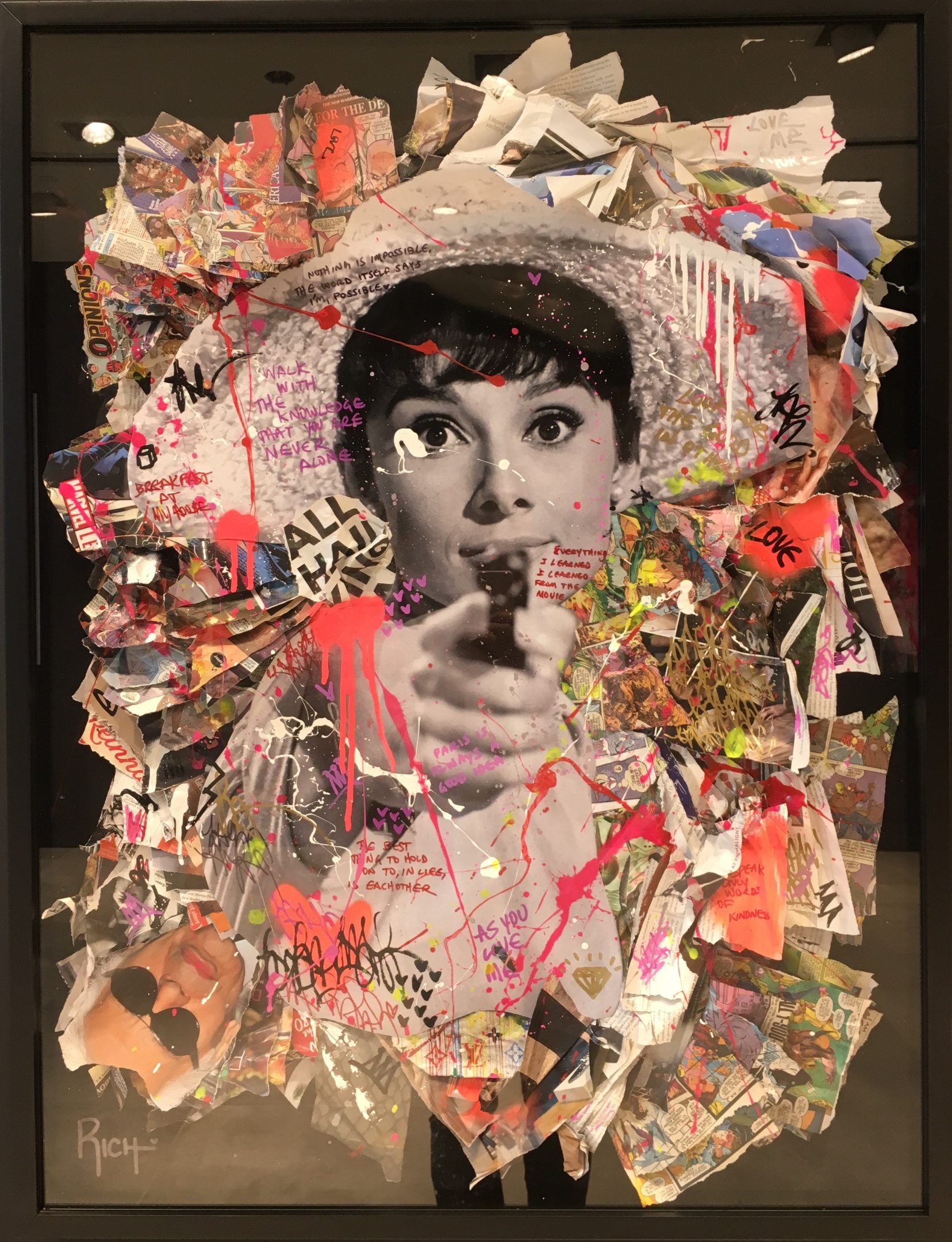 What materials did you use in your Marilyn Monroe piece?
Marilyn’s background is made up of Life magazine articles from her era, comics from the early- to mid-’80s and some of her most iconic quotes. I used the less recognizable, younger image of Marilyn because she seems almost shy. It’s different from the confident Andy Warhol image we typically see. I thought that had a lot of beauty to it. 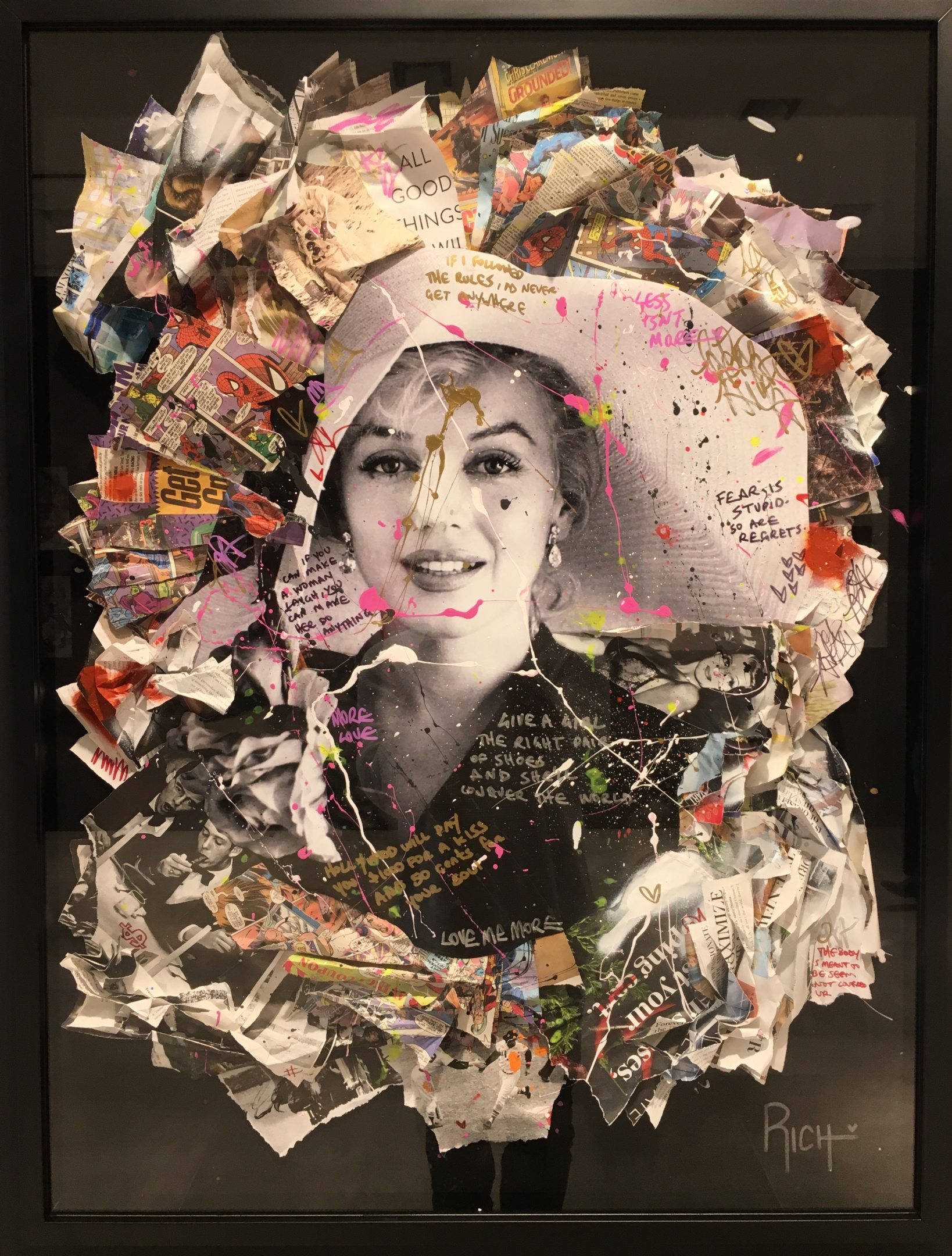 What other works will people see at the show?
I used Zeus and Apollo references to take my vintage inspiration one step further. Now, I kind of have three generations of artwork: there’s funny new-age stuff, 1980s vintage finds and mythical gods. 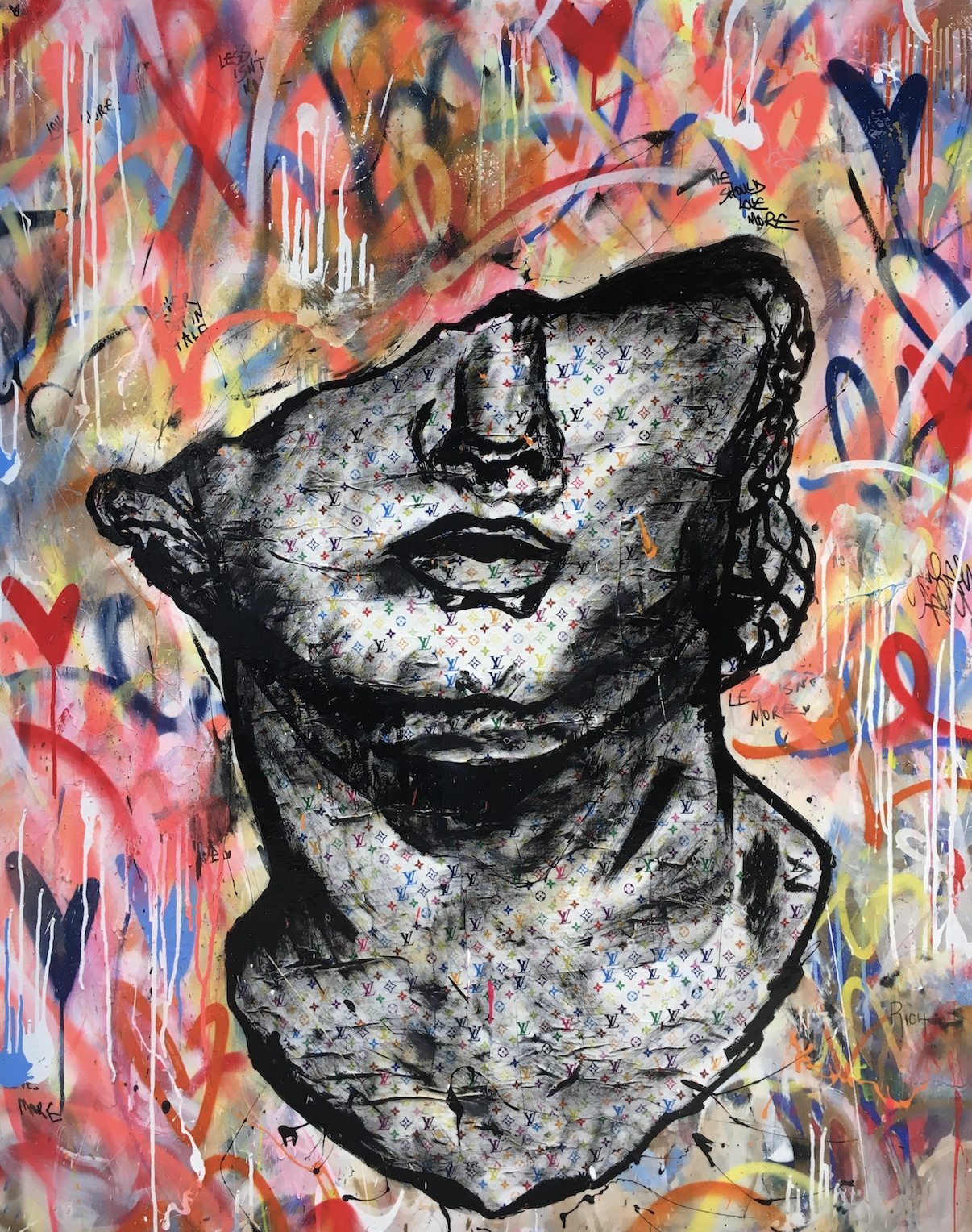 There are also three sofas in the show. How did you start working with furniture as art?
I did a series of pieces for a restaurant in Milan and a club in London. Rebel Nightclub bought about 15 vintage couches for one of their new rooms, and I decorated them in a bunch of fun quotes, like “She’s only with you for your cash, bro,” or “The more you spend the more she’ll love you.” 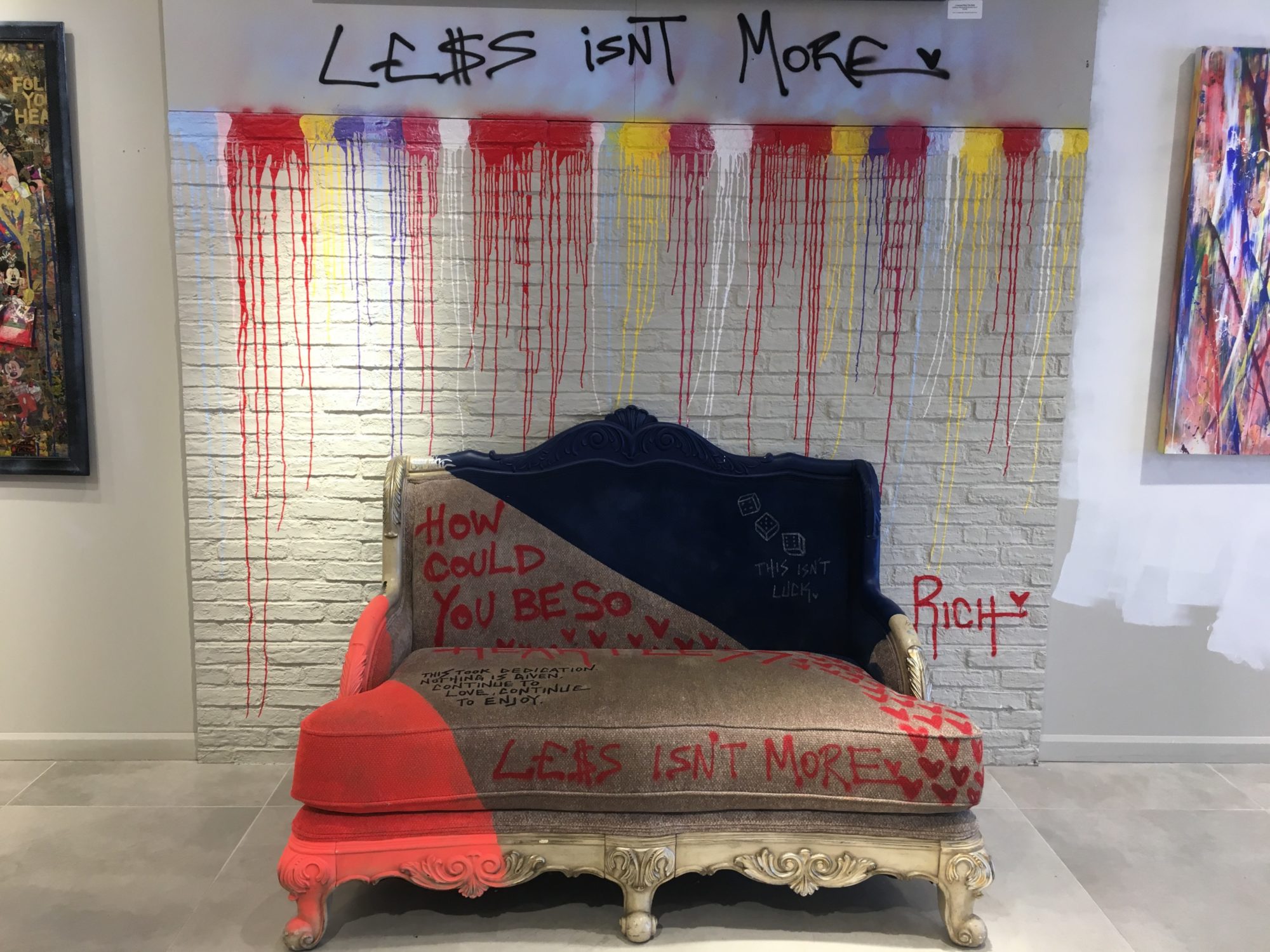 What’s the story behind the show’s name?
Less Isn’t More is basically the story of my life. I used to work from 6 a.m. to 2 a.m. most days. People kept telling me to do less, but I’m not happy unless I’m doing what my heart tells me is right. This is my way of saying that the more we put out into the world, the more comes back.