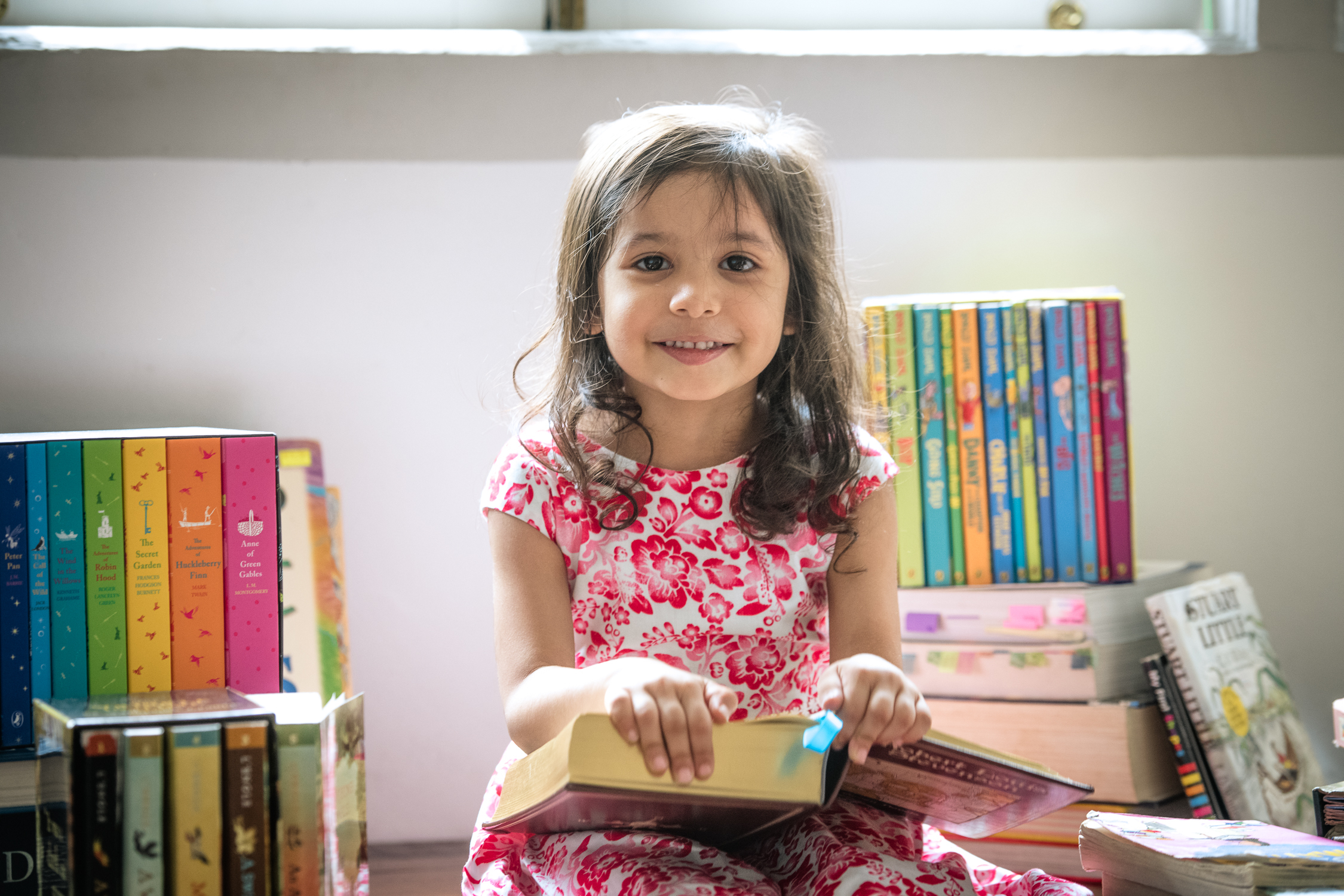 Chryseis Knight’s parents noticed early on there was something different about their daughter, who was born in Singapore and could read and talk in sentences before her first birthday. By three, she had written (and illustrated) her first book, The Great Big Lion. The educational storybook combines an adventure tale with mini-lessons on numbers, patterns and opposites—and it was recently published by Penguin Random House India, making Knight one of the youngest authors ever to be published by a major printing house. Here, she talks to Toronto Life about getting into Mensa, her follow-up projects and moving to Aurora in 2020, where she now lives with her parents and brother.

Congratulations on your new book. You must be very excited.
Thank you. I’m pretty happy. I wrote The Great Big Lion a few years ago when we were living in Singapore. I was three, and it was published by a small press there the following year. I also drew the pictures. My mom helped a bit but I did the lion myself. I convinced my mom that I wanted to get it published, and she took it to the right person.

You started reading when you were a year old. How is that even possible?
Well I’m seven now, so I don’t quite recall that, but it is true according to my parents. I don’t even know how I learned to read. After my parents came home from work, they would read me stories, and I would notice when they turned a page early or skipped a line. That’s when they knew that I could read.

You know that most one-year-olds are eating, pooping and snoozing. When did you first realize you had a special gift?
My parents realized it first and then I realized it and I thought, Yeah, I’m actually pretty smart.

I think you have to be more than pretty smart to get into Mensa. How did that happen?
My mom says that they noticed I was different when we were in Singapore, so they took me to a Mensa psychologist when I was about two. He asked me a lot of questions, and I got in. It’s fun to be a part of the organization. Recently, Mensa had this week where there were a lot of other people, and we got to chat online and to go to different seminars. There was one seminar with a girl who ate mealworms and I thought that was disgusting.

That does sound disgusting.
She said that it doesn’t do you any harm to eat them.

Can you tell me what The Great Big Lion is about and where the idea came from?
My parents read to me a lot when I was little. One day I was sad because we had gone through all of the children’s books on the shelf, so I decided to create a story of my own. I chose a lion as a character because I was really fascinated with them at that time after I went on a trip to the Singapore Zoo. I thought they were big and majestic. The story is about a lion and two children, Lily and Tom. They love the lion and they are friends with him. One day the lion goes missing, and Tom and Lily embark on an adventure to find him. 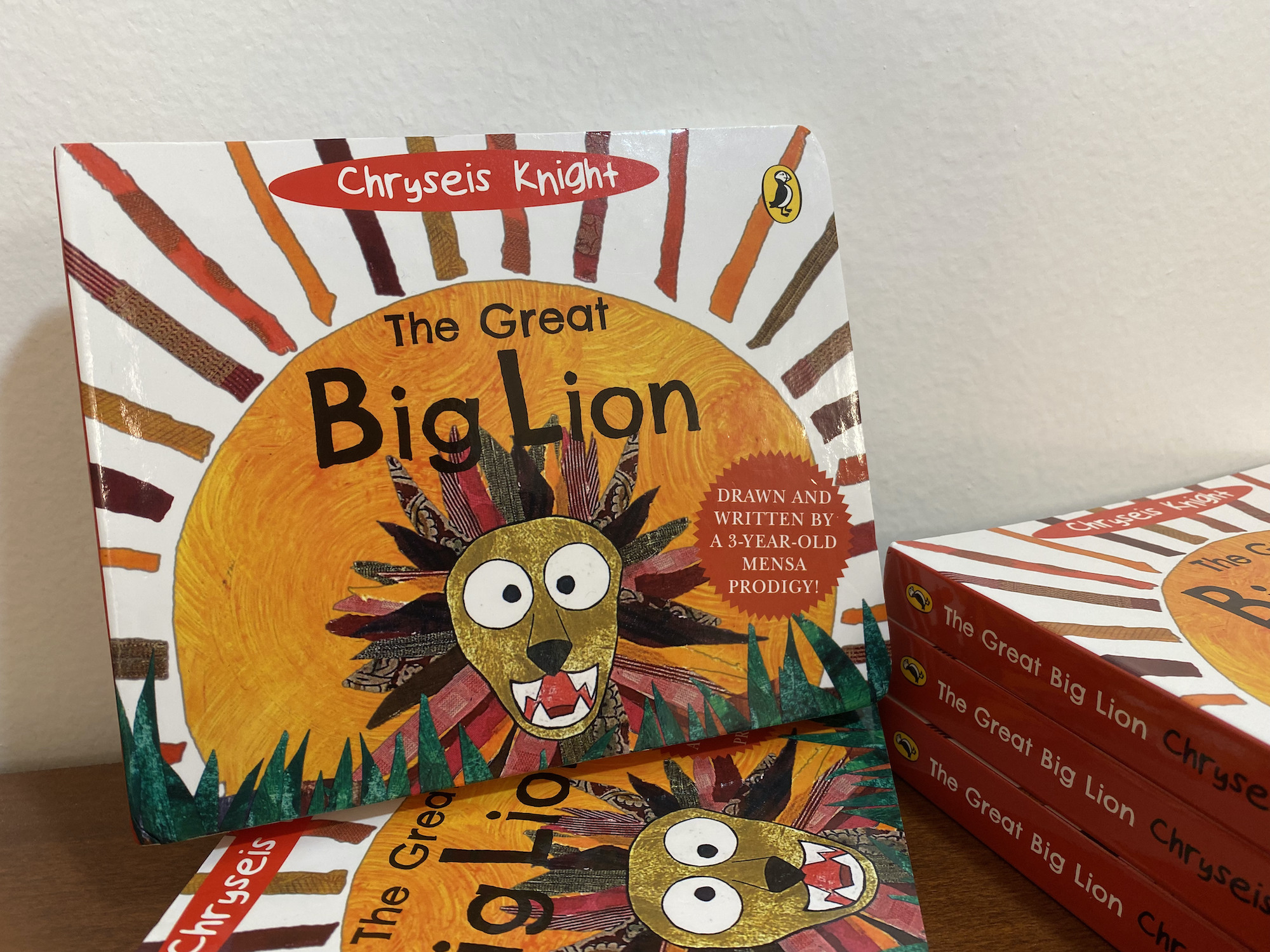 Becoming one of the world’s youngest published authors is a pretty big deal. Did you do anything to celebrate?
When my book was first published in 2018, my family went out to a fancy restaurant in Singapore. I don’t remember what it was called or what I ordered, but I remember I had a good time. I also went to a book launch and signed some autographs on bookmarks, which was fun.

Are you doing any events timed with the re-release?
I am doing some Zoom and Facebook events with the audience in India. I hope that maybe my book will get published in Canada soon, and I could do a book tour here.

In your press release it says that when you were working on The Great Big Lion you were “drawn to topics about diversity and inclusivity.” Can you explain what that means to you?
Well diversity is difference and inclusivity means including the difference, so they have to be together. In my book, the lion looks different and sounds different so the villagers are scared of him, but Tom and Lily want to include him.

When did you move to Aurora?
First we moved to Dubai because my dad had a job opportunity, and then we moved to Canada because my parents thought it would be a great place to live. We came here in January 2020, just before I turned six. I remember that my parents watched a lot of doctors on the news, and I did school online. Can I tell you a secret? At lunch I would work on my writing while I was eating.

Did you miss being able to go to school with other kids?
I was home schooled in Dubai, so September will be my first time going to school with other kids. I’m really excited about that. I’m starting Grade 2 at Northern Lights Public School and I can’t wait to make new friends. I’m excited to have play dates and talk to my friends about random things and ask them questions like, “What’s your favourite food?”

Most seven year olds like Lego or video games. Are you into those kinds of things?
I like Lego, but mostly I like reading and talking about books.

School must be easy for you—
Sometimes it is. I was talking to my teacher and telling her about all of the chapter books I have been reading. She said that she liked them, and I asked her lots of questions. She knew a lot of the answers, but when I asked her about Dr. Lanyon’s personality in The Strange Case of Dr. Jekyll and Mr Hyde, she said she would have to get back to me.

What kind of tips do you have for other kids who want to write their own books?
My tips are that there are never too many ideas, write all of your ideas down, take as many breaks as you need, make the stories funny and exciting, and make the reader feel emotional as they read your book. And have a space to write that is not in a noisy area.

Where do you do your writing?
I have a desk downstairs. It’s in the living room. Sometimes my brother will try to distract me. When he does that, I try to get him to sit down and read a book. I like to do my writing the traditional way, with a pen and paper. I never erase ideas even if I don’t use them because they might be good for future projects.

What kinds of projects are you working on now?
Right now, I am working on a chapter book. I read The Ickabog by J.K. Rowling, and I really liked it, so now I want to do that, too. I recently wrote a short story about a snail after I saw a snail when I was out on a walk. And I like writing book reviews too, so if you have any books you want me to review… I’m planning to read all the classics on my shelf and review them. I finished Black Beauty and a book on Peter Pan. Next I want to read The Secret Garden.

Are you a tough reviewer?
Oh yes, I always tell it like it is. I want people to know if a book is not good—so they don’t get it.

Have you given any bad reviews?
I read a book by Madeleine L’Engle called Many Waters. It was interesting but it wasn’t for me. But she has other books that I really like, such as An Acceptable Time. If I were making some changes to Peter Pan, I would shorten the first two chapters because it takes too long to get to the exciting part when they go to Neverland.

Wow, you’re tough!
I really liked the book though. I’m also really excited about writing poems. Can I read one to you?

Of course.
Okay, this is called Fly Skye, with an “E”:

Wow. I noticed you were singing the words. Could it be a song?
Oh yes! With all of my poems I like to sing them first as songs, and then I write them down.

So do you think maybe you could be a singer or even a pop star?
Maybe, but I want to stay on the journey of being a writer and also someone who writes poems and sings them.

Do you have much time to do normal kid stuff?
I do. On the weekend, I went to the pool. We had watched a lot of the Olympics so there were a lot of types of swimming that I wanted to try out. I saw Margaret Mac Neil, and she wanted to win but she didn’t expect it. I think being an athlete is like being a writer because you have to persevere.

Anything else on your summer checklist?
My dad probably has a plan. He has taken me to so many great places like Niagara Falls and Sauble Beach. And he took me to a pool hall where I learned a game called billiards and how to chalk the top of a stick. It was fun. I’m not sure where he’s going to take me next.