Here’s a look at Come Up to My Room, the fantastical exhibit taking over the Gladstone Hotel this weekend

Here’s a look at Come Up to My Room, the fantastical exhibit taking over the Gladstone Hotel this weekend

The Gladstone’s annual Come Up To My Room, now in its 16th year, transforms four floors of the hotel into an immersive art playground, with colourful light and sound installations around every corner. This year’s exhibit, which runs throughout the weekend, features more than 20 projects by 50 artists. Here’s a closer look at some of our favourite installations: 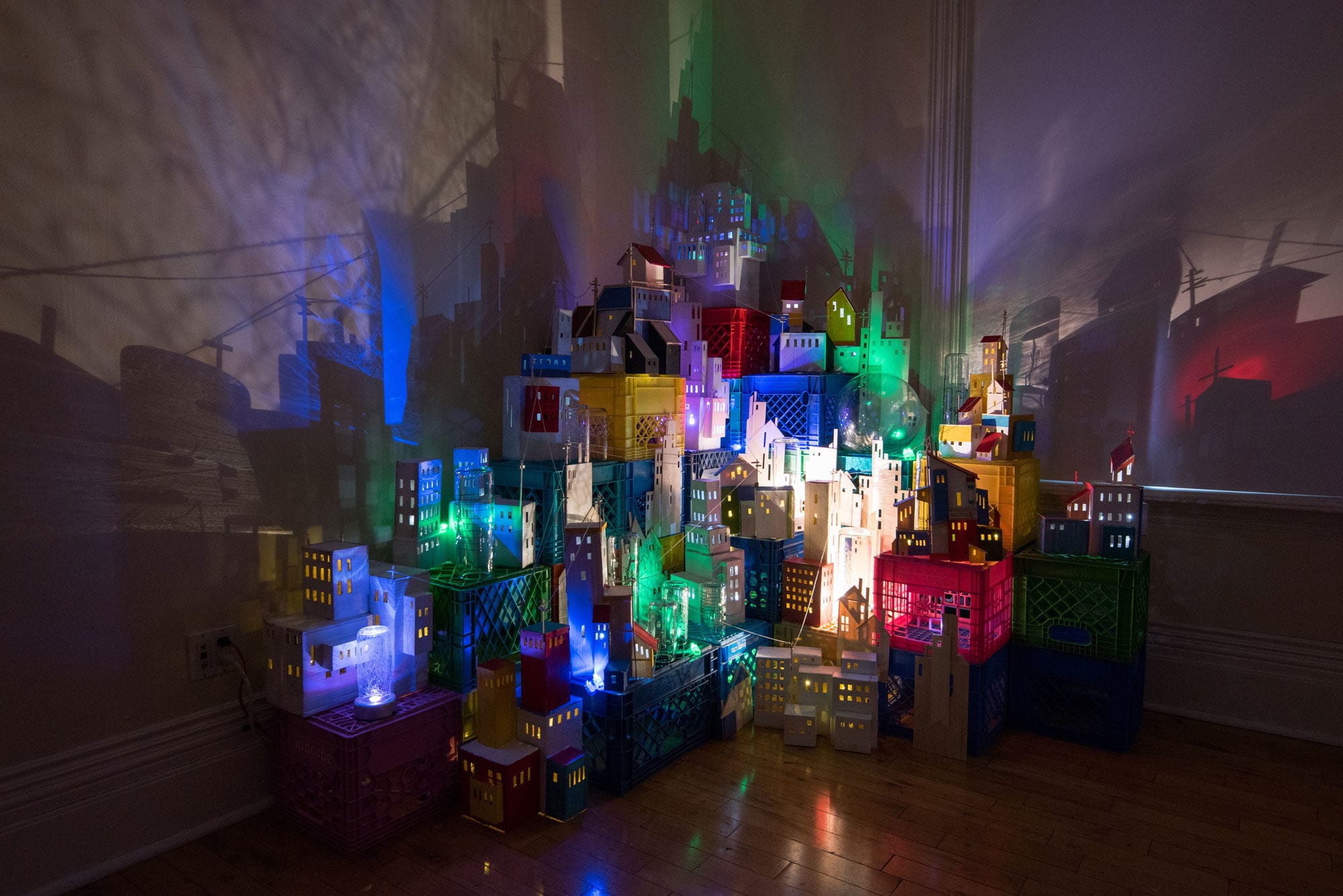 This massive nightlight village, made of glass and wooden sculptures stacked on top of plastic milk crates, fills the entire corner of Studio 205. The artists carved dozens of tiny windows into the houses to project shadows onto the surrounding walls, which creates the illusion of an even bigger cityscape. They wanted to make viewers a part of the installation: whenever someone enters the room, the shapes and patterns shift around them. 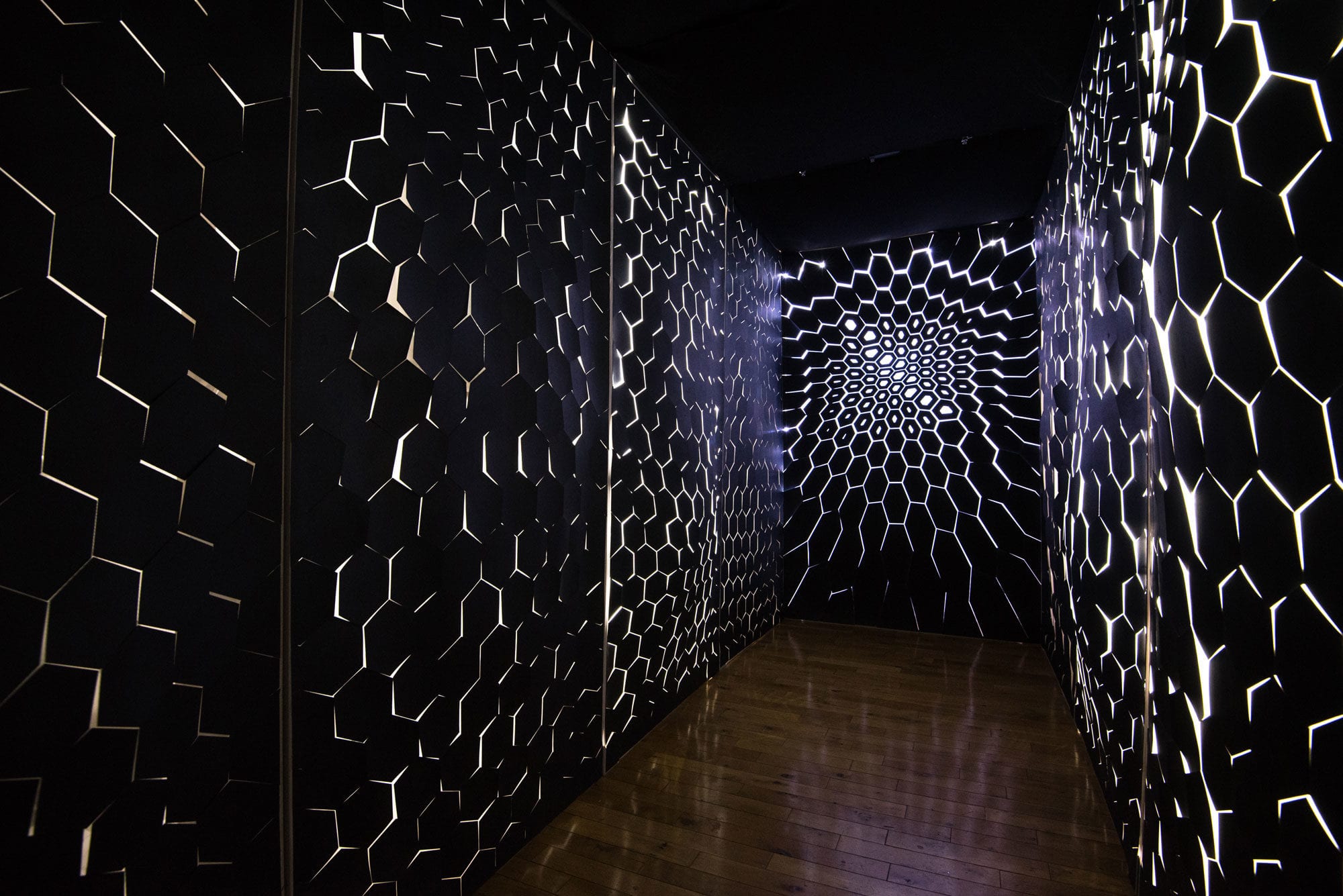 A room with breathing walls

This room is coated with black geometric cutouts (or “jet black skin,” as the artists call it). When you come into the space, the walls look like they’re breathing—the shapes expand and contract, emitting small amounts of light as they move. Being inside feels like occupying the belly of a beast. 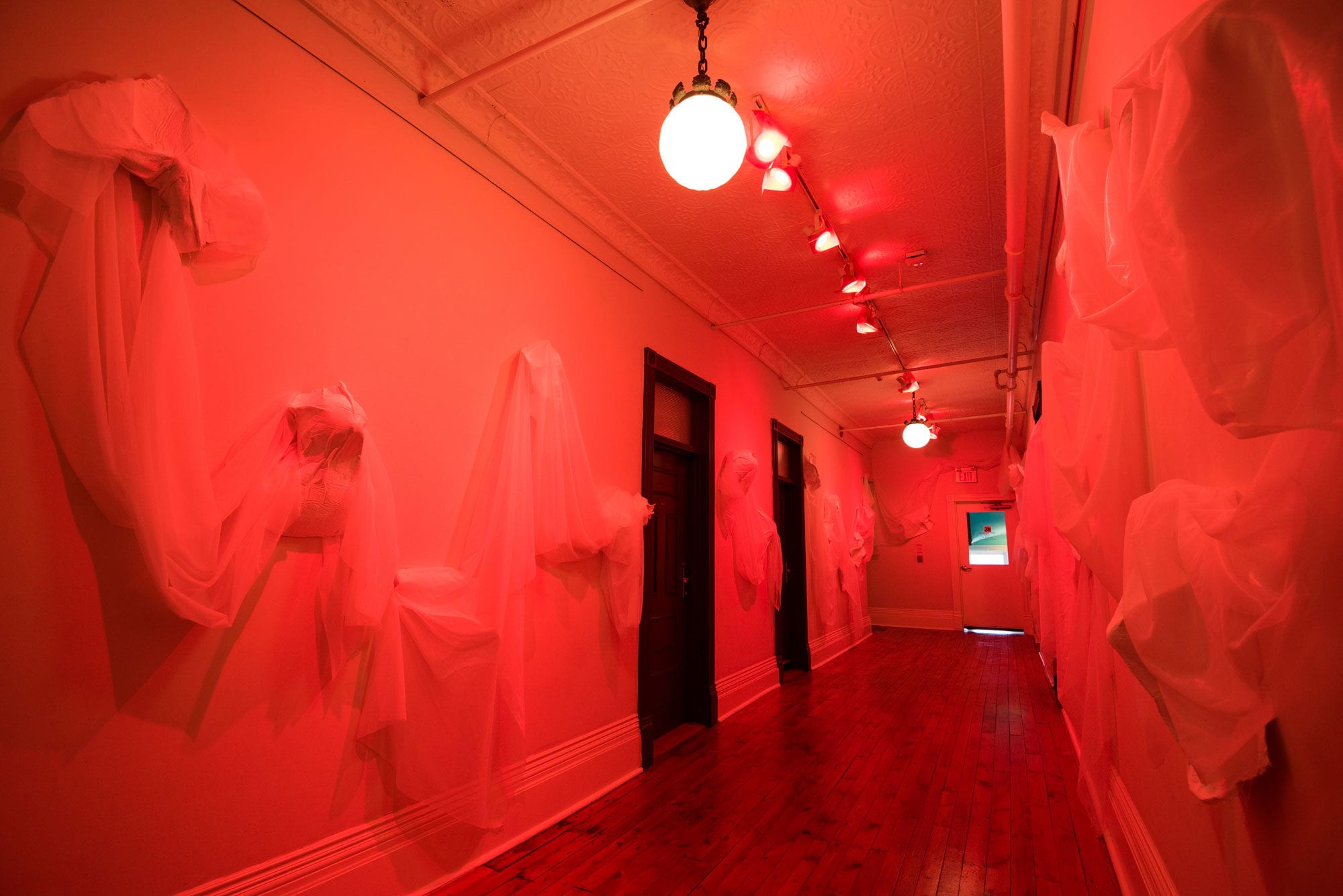 The artists were inspired by Poché, an architectural term used to describe the solid components of a building: beams, columns, frames. They created papier-mâché pillars and draped them with loose fabric to give the ordinary walls new structures and textures (kind of like flipping the Poché inside out). The red light gives the room a spooky haunted house vibe. 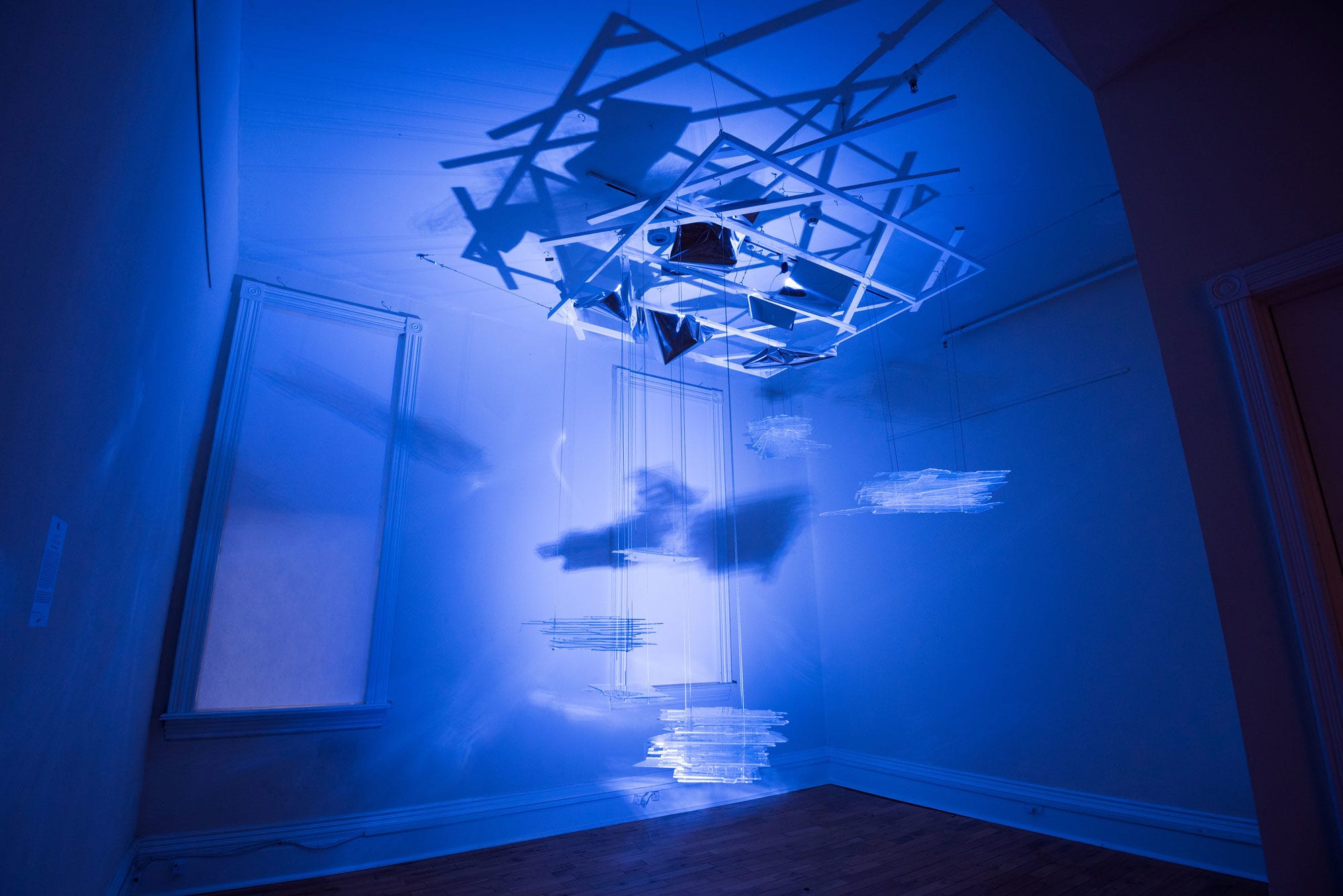 Toronto printmaker Alex R.M. Thompson debuted a smaller version of this piece at 2017’s Nuit Blanche. The floating structure resembles a giant mobile, with hanging glass panels engraved with 3-D etchings of maps and architectural sketches illuminated by blue light. If you stand under it and look up, you might catch a glimpse if yourself in one of the mirrored panels. The whole thing is meant to be a “living map,” where viewers can see themselves reflected in the futuristic cityscapes. 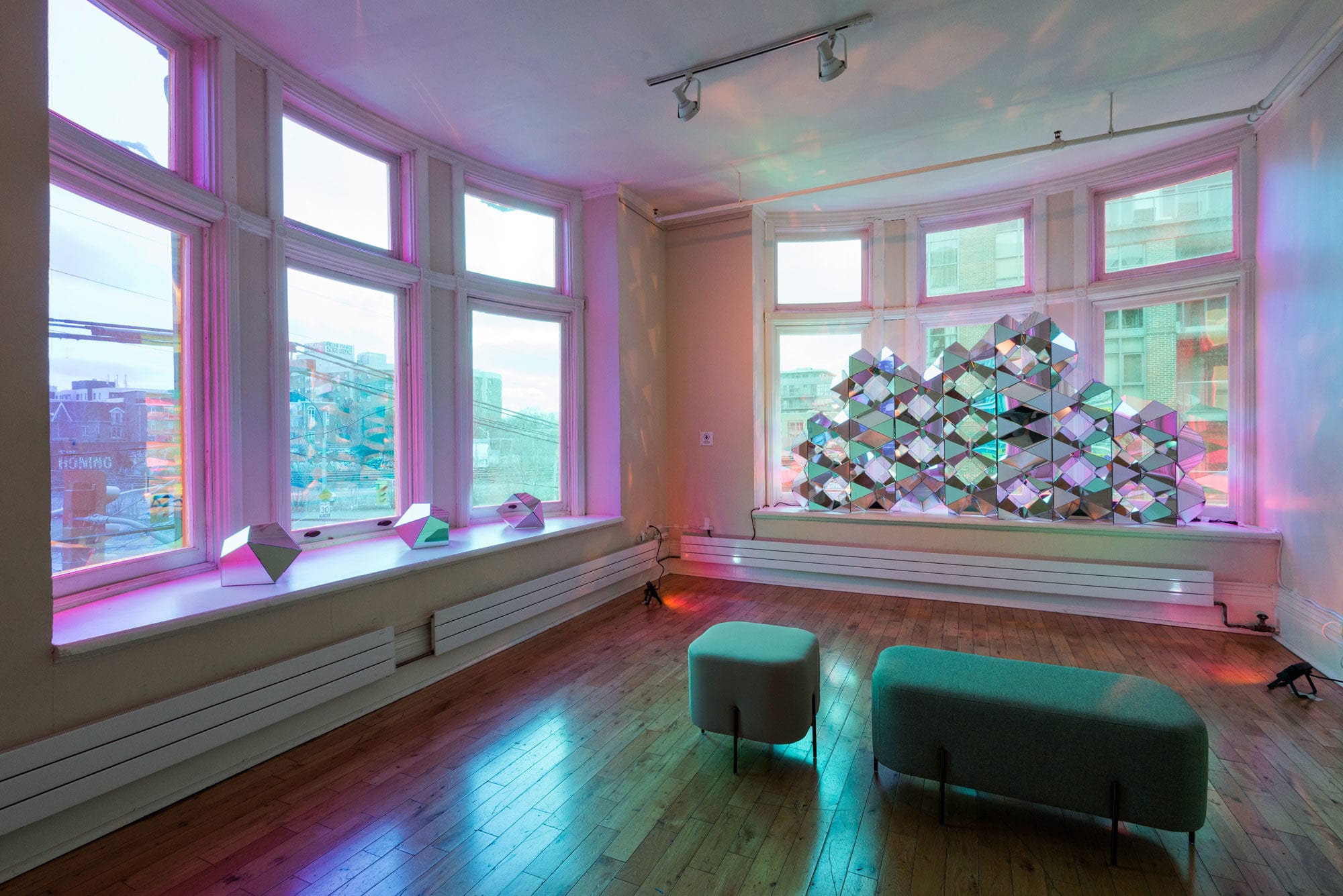 Zahedi’s installation is basically a giant kaleidoscope. She assembled 3-D mirrored shapes into a giant sculpture that bounces light around the white walls, creating a colourful, disco ball illusion. 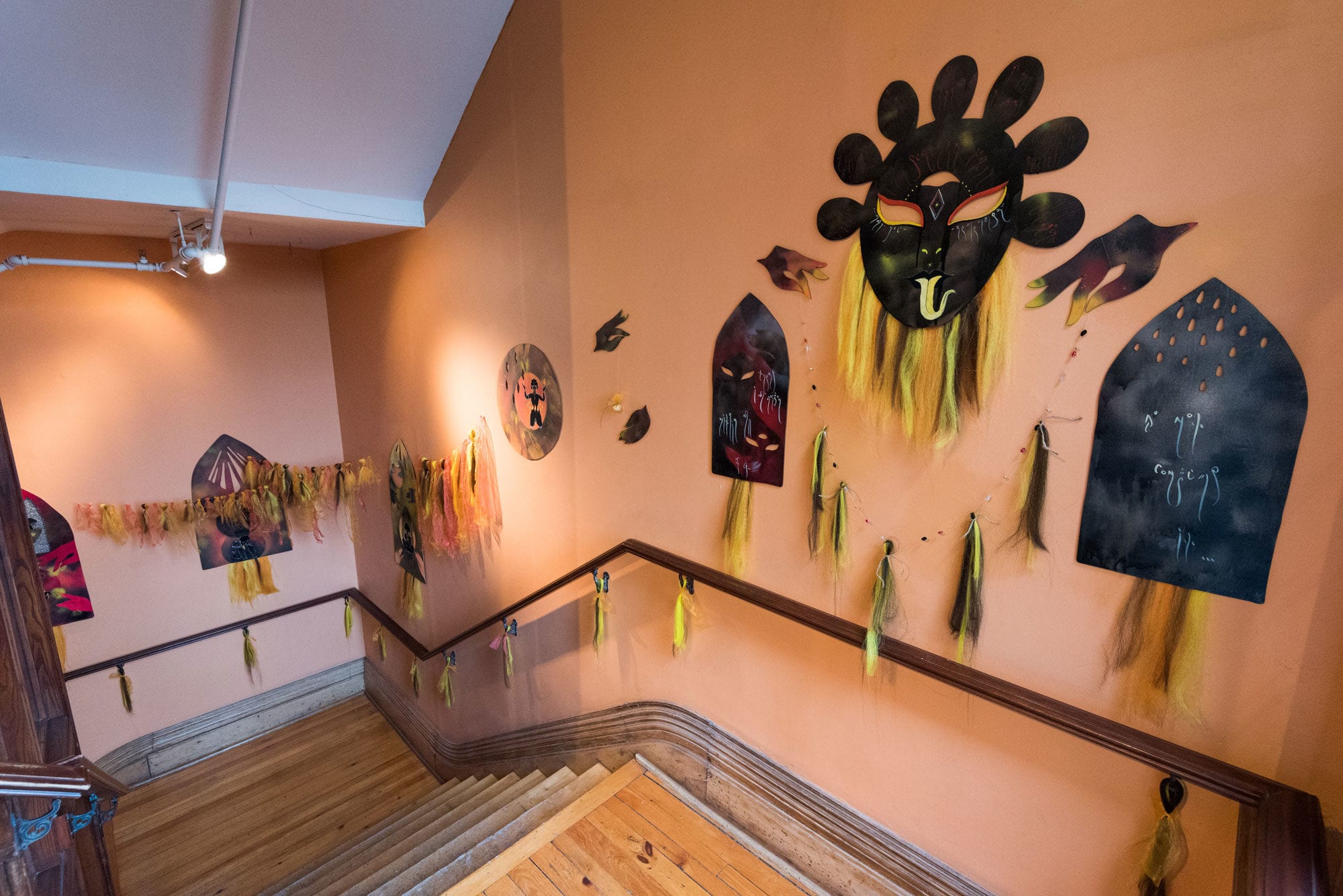 A tribute to the goddess of fire

The Tagalog word sunugin, which translates to “burn,” is also the name of the Filipino goddess of affirmation and fire. Aquino lined the stairwell between the Gladstone’s first and second floors with brightly coloured hair hanging from charcoal-black prints and plaster moulds, all inspired by the goddess.

Topics: Come Up to My Room The Gladstone Hotel