It hasn’t been the best summer at the box office, but if this weekend’s record-setting haul is any indication, all that’s been missing is a good, scary, shot-in-Toronto blockbuster. Andy Muschietti’s adaptation of It, based on Stephen King’s magnum opus about a fear-fuelled, child-eating malevolence that likes to appear as the world’s scariest clown, opened to a September-record $117.2-million. Many viewers no doubt suffered through clown-filled nightmares after watching the movie, but at least Toronto audiences got the joy of recognizing some familiar local haunts along the way.

As King fans know, the novel It follows the same characters as both children and adults, but the film only covers the former. A sequel was already planned and, given It’s box office success, it shouldn’t be long before cast and crew are gearing up. Anyone who has an opinion on the matter already thinks Jessica Chastain needs to play the grown-up heroine Beverly Marsh. She starred in Mama, Muschietti’s first film (also shot in Toronto, under the wing of honorary Torontonian Guillermo del Toro), and basically lives here anyway, between filming Miss Sloane, Crimson Peak and current TIFF entry Molly’s Game. One way or another, this probably isn’t the last time the GTA will dress up as Maine. Here, a guide to the notable GTA locations that show up on screen this time around.

The opening sequence, in which Georgie Denborough meets his untimely end at the hands of Pennywise the Clown, is extremely faithful to King’s prose. The scene was filmed near Springmount Avenue and William Street in Weston, complete with a custom-built sewer grate for Pennywise to lurk in:

The fictional town of Derry, Maine, is one of the central locations in King’s larger oeuvre, and nearby Port Hope gets the honour of portraying it. Don’t be fooled by the American flags in this shot of “Derry High School”:

What’s supposed to be the Kenduskeag Creek, running through the centre of town, is actually the Ganaraska River just before it flows into the harbour and Lake Ontario. A drone took this handsome shot early one morning last July:

A lot of the action takes place in Derry’s Heritage Conservation District, which got a late-’80s makeover for the shoot. Landmarks like the Capitol Theatre and Memorial Park are easy to spot in the finished film. Here’s a shot from a laneway off one of the town’s main street:

The first Toronto cameo flies by in this slide show. Bill Denborough’s happy family is shown riding the Log Flume Ride at Centreville. Presumably, because the wording is so small on screen, they didn’t make the effort to change the spelling to “Centerville” for American audiences:

One of the few identifiable Toronto locations is the synagogue where Stan Uris has his bar mitzvah:

Pennywise’s home away from home is far too creepy to be real. It’s an exterior set built in Oshawa. One of the film’s most prominent locations, it took about two weeks to build, and they shot there for three or four days last August:

The interiors are the dressed-up interior of Toronto’s historic Cranfield House, on Pape, north of Gerrard. Like every other old house in town, the 1901 mansion is set to be razed for condos, but in the meantime, it’s a de facto mini film studio, hosting Orphan Black, The Strain and It in the past few years, much to the chagrin of local residents:

All of the other interior sets, including Pennywise’s lair in the sewers, were built at Pinewood Studios, just a short walk from where Star Trek: Discovery was getting underway this time last year:

Further out of town, the Losers Club goes for a dip in the local quarry, as small town movie kids are apt to do. This one is on the other side of the GTA from Port Hope, in Elora. It’s something of a cinematic treasure in Wellington County: Jennifer Lopez herself jumped off the same 40-foot cliffs in 2001’s Angel Eyes:

The covered bridge in West Montrose, east of Kitchener, serves as the Kissing Bridge early on:

It’s where Henry Bowers and his gang bully Ben Hanscom:

It shows up again very prominently in the movie’s final scenes: 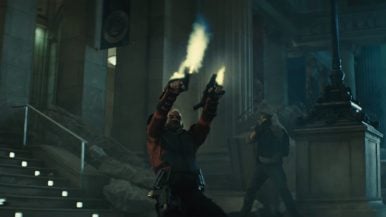