The Festival of House Culture sounds like the sort of bacchanalia a teenager unleashes when his parents take off to Lake Placid for the weekend, but it’s more low-key get-together than EDM rager. For one week, people all across the city will open their doors for public potlucks, concerts, lectures, workshops, dance shows, plays, film screenings and at least one indoor garage sale. “It’s taking things that we normally do alone, online or in commercial venues and doing them face to face in each other’s homes,” says Michael Holt, a musician and composer who helps organize the festival. Holt suggests seeking out events in your area—you may even talk to you neighbours for the first time. Here, a guide to the week’s most promising events to get you started.

Hosts: Heather and Michelangelo • Locale: House
It’s an easy choice on Monday—there’s only one event: a social after a vigil addressing the Kinder Morgan pipeline. Following the demonstration, people will meet near Christie and Dupont for a discussion with activists from 350.org about the climate crisis.

Host: Lata • Locale: Apartment
Sit in on a group meditation session with live sitar music in the Junction, which should help you forget the apocalypse that’s looming a little closer every day. Space is limited, so reserve a spot.

Host: Soozi • Locale: Art Studio
Wednesday offers a musical double bill. For mid-towners, beatboxers, songwriters and other musicians will be filling a soundproofed space near St. Clair with their tunes. Downtowners can head to Richmond and Spadina for “Flute Stories”—storytelling, but with flutes!

Hosts: Raph and Bea • Locale: Apartment (as the hosts call it, “The Wiggle Room”)
There are dinners and concerts galore on Thursday, but we have our eyes on a shadow puppet workshop in Roncesvalles. You’ll never again struggle with that essential blackout survival skill: projecting a perfect rabbit on your kitchen wall.

A garage sale to rule them all

Host: Cora • Locale: House
Head to Forest Hill for the fest’s one and only garage sale, where the shopping comes with a free soundtrack courtesy of folk singer Leslie Ramsey Taylor. The proceeds support a good cause: paying for host Cora Simone’s Lyme disease treatment.

A sci-fi kind of Saturday

Host: Perry • Locale: CrossFit gym
Saturday is flush with storytelling. We recommend the performance of original science fiction stories in St. Clair West. There’s also an evening of folk tales to celebrate the reopening of The Four Winds Library in The Junction, and a knitting circle—with music provided by Holt, the fest organizer, on piano—around Deer Park.

Hosts: Kevin and Scarlett • Locale: House
CBC Poetry Prize winner Michael Fraser will read in Sunnyside, party animals can dance the weekend out at the “Swamparella Dance Party” in the Annex, but we’re partial to a particular concert in Trinity Bellwoods—”How to Pour Whiskey for Strangers,” which we pray is meant to be taken literally.

The Festival of House Culture runs until Sunday, November 27. See calendar for location and pricing details. No RSVPs neccessary unless otherwise indicated. 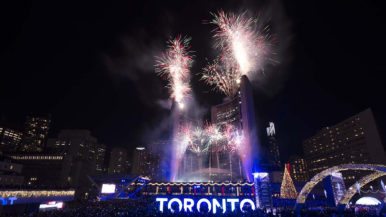 The Cavalcade of Lights, a Gordon Lightfoot concert series and six other things to do this week