Inside David Angelo’s private art collection, with 300 baseballs and a piece made from prescription pills and marijuana leaves

Inside David Angelo’s private art collection, with 300 baseballs and a piece made from prescription pills and marijuana leaves

Once or twice a year, David Angelo lets a lucky group of art students into his Rosedale house to tour his extensive art collection. Over 30 years, he’s built a treasury of more than 300 on-display works that span multiple genres but share a dark, often surreal aesthetic. “I have no knowledge of art history, per se,” he says, “but if I see a piece of art that helps me share the story of how I see the world or how I feel, I need to incorporate it into my life.” He is colour blind, and considers the collection atypical in its variety of artists and styles. “It confuses people, it disturbs people, it helps people feel more comfortable about their own artistic decisions. It gives them an opportunity to see that what they are creating or collecting is okay.” Here, a look at some of Angelo’s favourite pieces.

St. Maximus (on Wall): “After the Christian wars, the Church rediscovered the catacombs in Rome, and basically anybody with a palm branch on their coffin was deemed a Christian martyr. Their skeletons were bejewelled, named saints by the Pope and sent to various churches. The implication is that we’re all going to end up dead, regardless of whether we’re bejewelled. This photo was taken in a German basilica. I love the composition, the sweetness and the humour in this photo. Some of those jewels are fake, because they’d run out of real jewels. What can a dead body do with riches?”

Club Head (above cabinet): “I bought this from the estate of my good friend, the late art dealer Bill Jamieson. The club—called an u’u, a warrior’s usual weapon and insignia—is carved from a dense heavy wood, known to the Marquesans as toa, which is also the Marquesan word for warrior. The head of an u’u is always carved on both sides with similar but subtly different imagery—a series of faces looking in various directions, to help the warrior keep watch. It’s like a religious icon. I would sit with Billy in his office and just gaze at it. When he died, I felt like the library, movie theatre, museum and bar in a one-stoplight town had all burnt down at the same time. I wanted to make sure I had some of Billy’s collection with me always so I can remember him.”

“Canadian portraitist Arnaud Maggs was the winner of one of the first-ever Scotiabank Photography Awards. This is a self-portrait in the style of the 19th-century pantomime Pierrot. Arnaud loved patterns; everything about him was meticulous and thought out. I remember Arnaud sitting at my dinner table while this was on the wall. He looked at the food and just said, ‘What a joy!’ This piece reminds me of him embracing life. He died in 2012. I’m really honoured to have this piece in my house.”

Self Portrait with Alligator: “A gallery sent me an image of this work in progress and I bought it before it was even finished. Many years later, I met Julie Heffernan in New York. I asked her,’Why did you make this self-portrait?’ She said, ‘Sometimes raising children is like holding a friendly alligator.’ I mean, look at the alligator’s teeth and its smile—it’s not actually imposing. In life, you just get nicked along the way, and it’s not always on purpose.”

Shut Up: “This piece, from an exhibition called Shut Up, comprises five mannequins from the 1950s. They’re essentially dummies—that’s how we all acted at that time. Nobody questioned authority or what life’s purpose was. When my son came home on the day this was hung, he stopped for a second and went, ‘Why can’t we have normal art, like paintings of trees and boats?'”

Untitled (Babies): “These are from a collection of cement babies. I own only these three. I wanted them out of the way, so we wouldn’t break them.”

“This is a really early Tomaselli piece—I couldn’t even afford one now because he’s too famous. Tomaselli grew up in the Orange County area, near Disneyland, and he believed that most of the world we lived in is manufactured, fabricated and self-medicated with too many prescription drugs. The spiral is made from prescription pills and recalls a Native dreamcatcher, and he pressed marijuana leaves between the blue papers.”

“The first time I saw Dorian Fitzgerald’s work, I went home and measured my walls. The piece I wanted wouldn’t have fit, so I commissioned him to do a painting this size. He came up with the idea of painting Queen Victoria’s railcar. His pieces are opulent beyond measure. I’m basically colour blind, so I know there’s blue in this, but colour composition really doesn’t mean as much to me; it’s simply lush.”

“Painter and performance artist Joe Coleman usually deals with serial killers or life stories. I know Leonardo DiCaprio has some of his work. This is a portrait of Coleman’s grandfather, with his grandmother’s and mother’s faces above. We were close friends, and when Joe was in town for a book signing, the two of us were driving to Billy Jamieson’s place and I said, ‘I’d like to have one of your paintings,’ and he said, ‘I think I know which one.’ So I didn’t choose this painting—it was chosen for me.”

“There’s a scene in Raging Bull where Jake Lamotta gets the shit pounded out of him by Sugar Ray, but then he says, ‘I never went down, Ray… You never got me down.’ That’s what this photograph reminds me of. This person is still living strong or trying to. I got to know Jeff Bierk, the artist, recently, and he is a compassionate soul. A third of the purchase price went directly to the fellow in the photograph.”

“When Guy Maddin’s grandmother was sick in the hospital, he visited her. Then the nurses wheeled in a semi-clad young woman, fresh from a car accident. So, when he made this piece, Guy was dealing with the grief of his grandmother passing away, but also the sexual stirrings of seeing this young woman. I’ll never forget having Guy explain that moment when he visited my house. As he was telling the story, my cat was lying on the couch near us. Guy quipped, ‘Your cat looks like it’s been de-boned.'”

“If I could, I’d have a house full of Jack Burman’s work. This piece disturbed me, but it’s still beautiful. It’s a face of young woman who’s just died, and there’s a look of ecstasy attached to death. I bought it when my children were quite young, and I said to them, ‘Are you okay with photographs of dead people? Because daddy just bought some.’ And they said, ‘Yes, yes.’ When I showed them the piece, I realized I had forgotten to tell them the people are decapitated. For the longest time, this work was really hidden.”

“Spring Hurlbut was married to Arnaud Maggs. After he died, she was left with his ashes and made a series with them. I love this one in particular because it’s ‘planeterial’ and has those lines. Arnaud was well known for his lines, symmetry and the thought process that went into his work. I haven’t found a place to hang it yet, but that’s fine right now: the pieces I love the most are the ones I want to see the most. As for the balls, baseball is my passion. I have more than 300 balls, and my son has more than 200 in his collection. All are signed.”

“The first time I saw a Sosnak, I fell in love. I have 24 of these balls now. The detail is very much like a Joe Coleman painting, but it’s all about baseball. He writes about games on the balls themselves. He may have painted 500 to 800 baseballs, but not all are complete. There’s a whole hierarchy of what makes a Sosnak ball a good Sosnak ball, from the number of panels painted to how well the colours have stayed. I co-administer a Sosnak fan club page on Facebook, and the guy who created it, a lawyer based out of Virginia, is on the hunt for the holy grail of Sosnak balls: a really artistic ball depicting the the best players, like a Babe Ruth, that’s also full-panel and deep-coloured. Because so much of his work is undocumented, each new find leads to a small frenzy among collectors.” 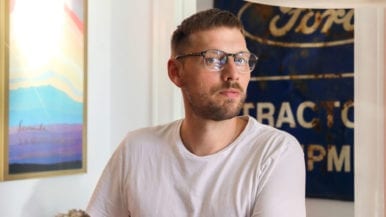