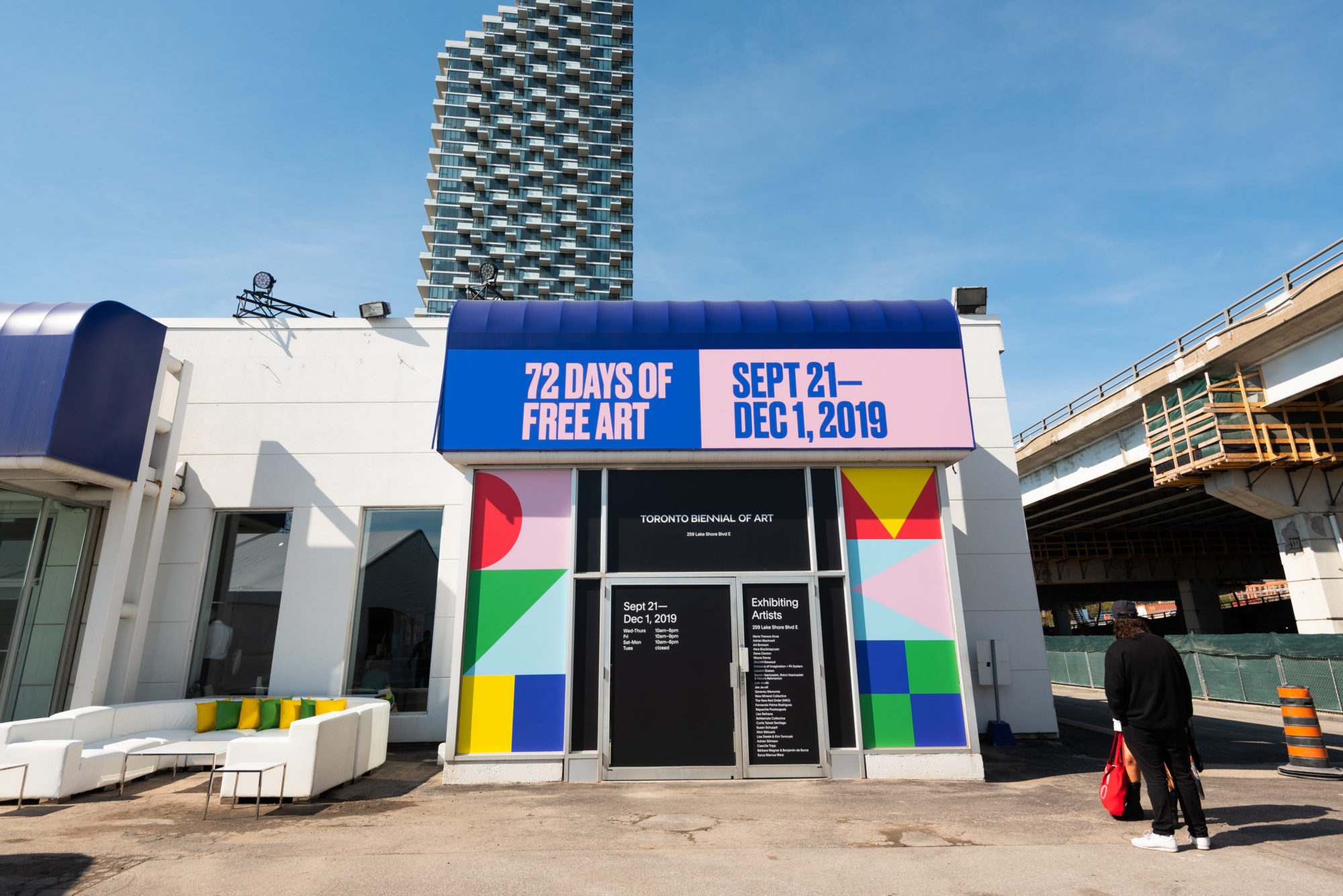 The Toronto Biennial of Art is a brand-new, totally free contemporary art exhibit that’s running at various waterfront venues, from now until the beginning of December. The show was conceived by local art consultant Patrizia Libralato, who had been dreaming of creating an inclusive, socially engaging festival since 2014. Libralato wanted to highlight culturally diverse Canadian art while also turning the city into an international destination every two years. She teamed up with Ilana Shamoon, who was running the Public Art program at Waterfront Toronto, in 2016, and together they tapped curators Candice Hopkins and Tairone Bastien to curate the inaugural exhibit.

This year’s theme centres around Toronto’s shoreline. “Toronto’s waterfront is currently undergoing urban renewal at a faster pace than anywhere else in North America,” says Libralato. “But it has been populated by Indigenous peoples for at least 12,000 years. We wanted the opportunity to honour and explore those underrepresented histories.” Much of the programming can be found at repurposed sites along the lake, including a former car dealership at 259 Lake Shore Boulevard East and a munitions plant turned arts centre in Mississauga. Here’s a peek at what you’ll find.

Blackfoot artist Adrian Stimson created this installation in collaboration with residential school survivors in Siksika, Alberta. The dining room table, with a mix of traditional British place settings and Indigenous influences (including a light fixture from the Old Sun residential school), is meant to highlight the layers of colonization and resistance in the artist’s community: 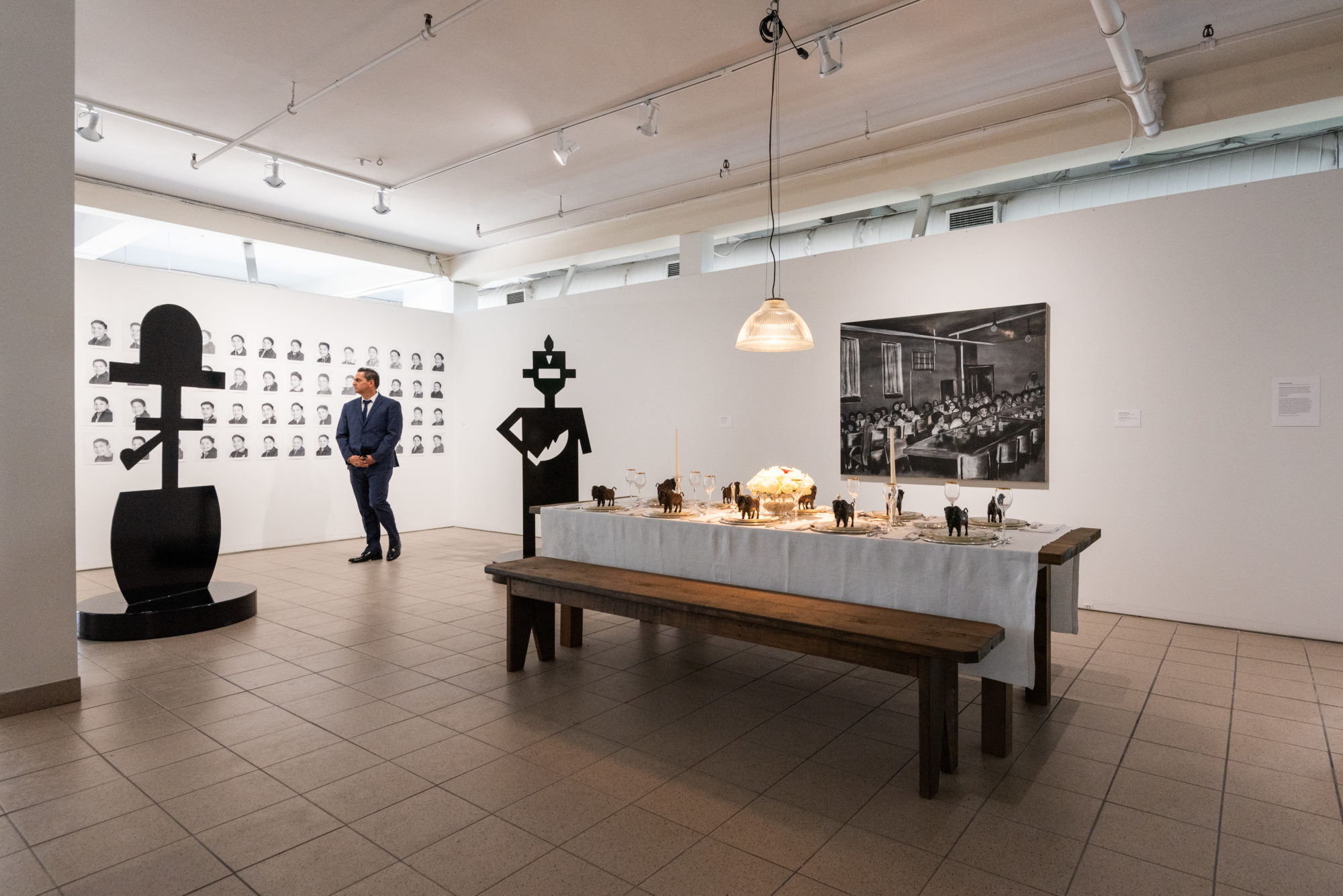 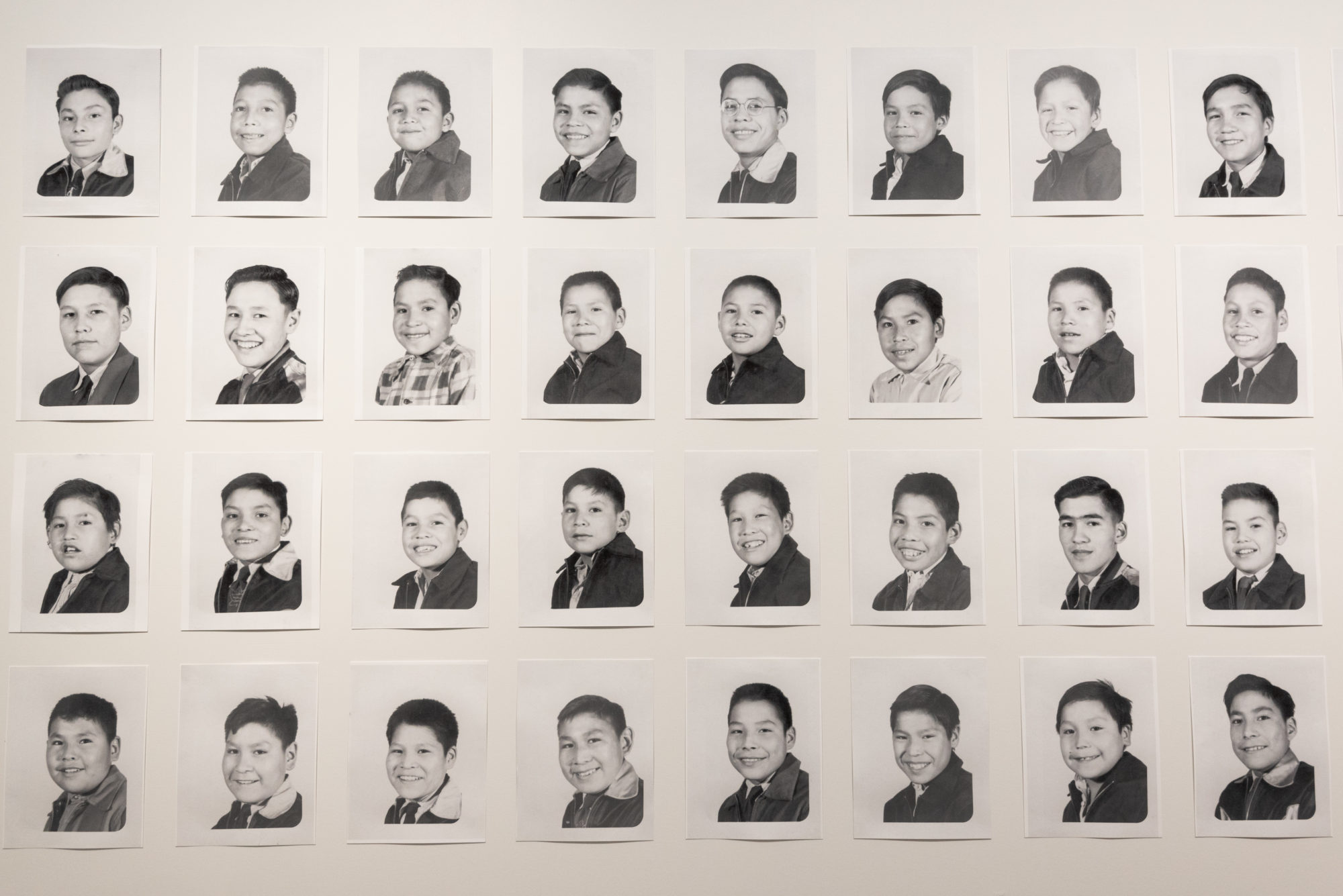 This piece, called “Cihuapapalutzin,” was created by Mexican artist Fernando Palma Rodriguez. It’s a swarm of 104 robotic butterflies made from recycled aluminum, programmed to respond to seismic frequencies of any strength (so they flutter when people walk by). The installation is an ode to the monarch butterfly, the only species that migrates between Canada and Mexico every year. It also questions the belief that technology will save us from climate change: 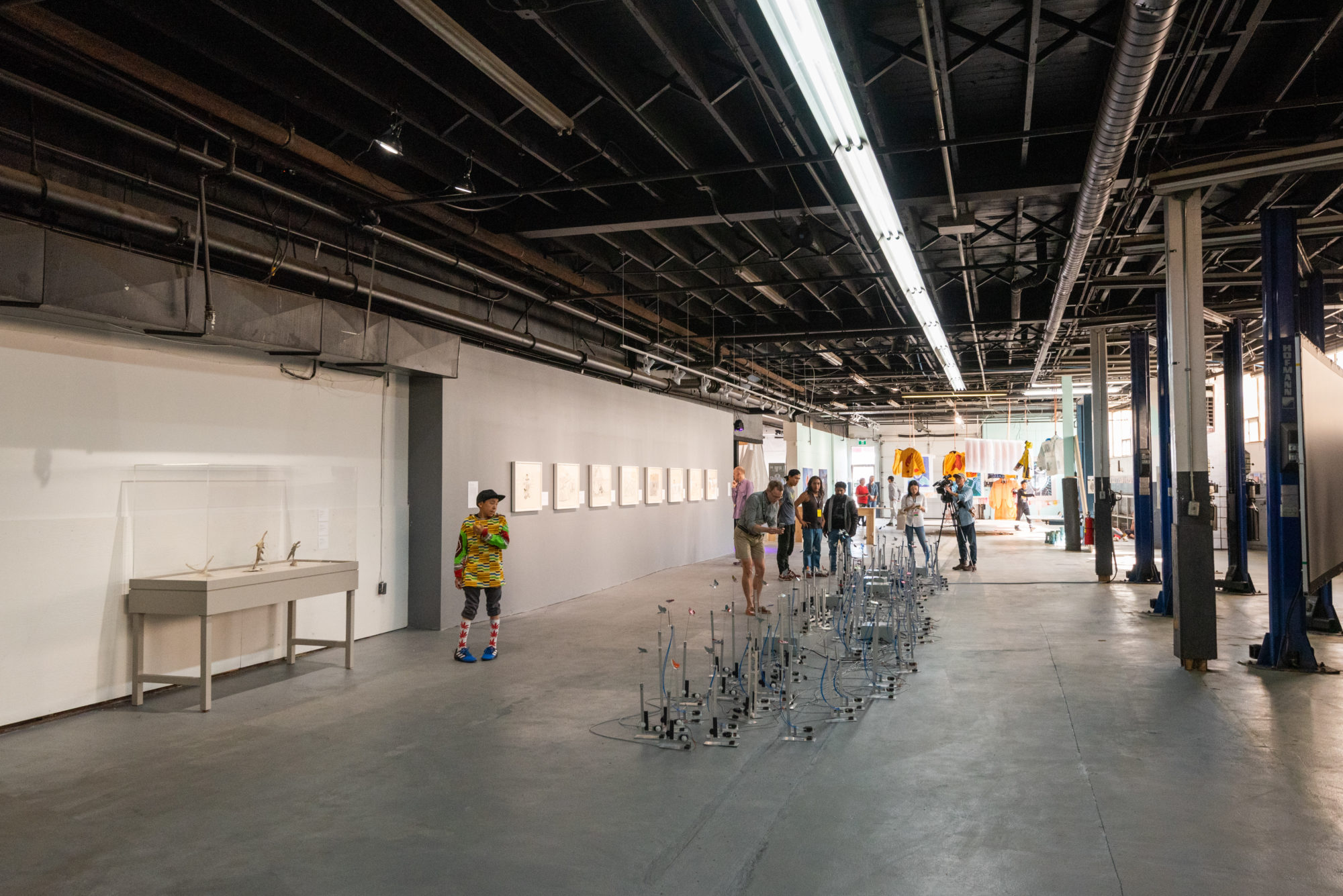 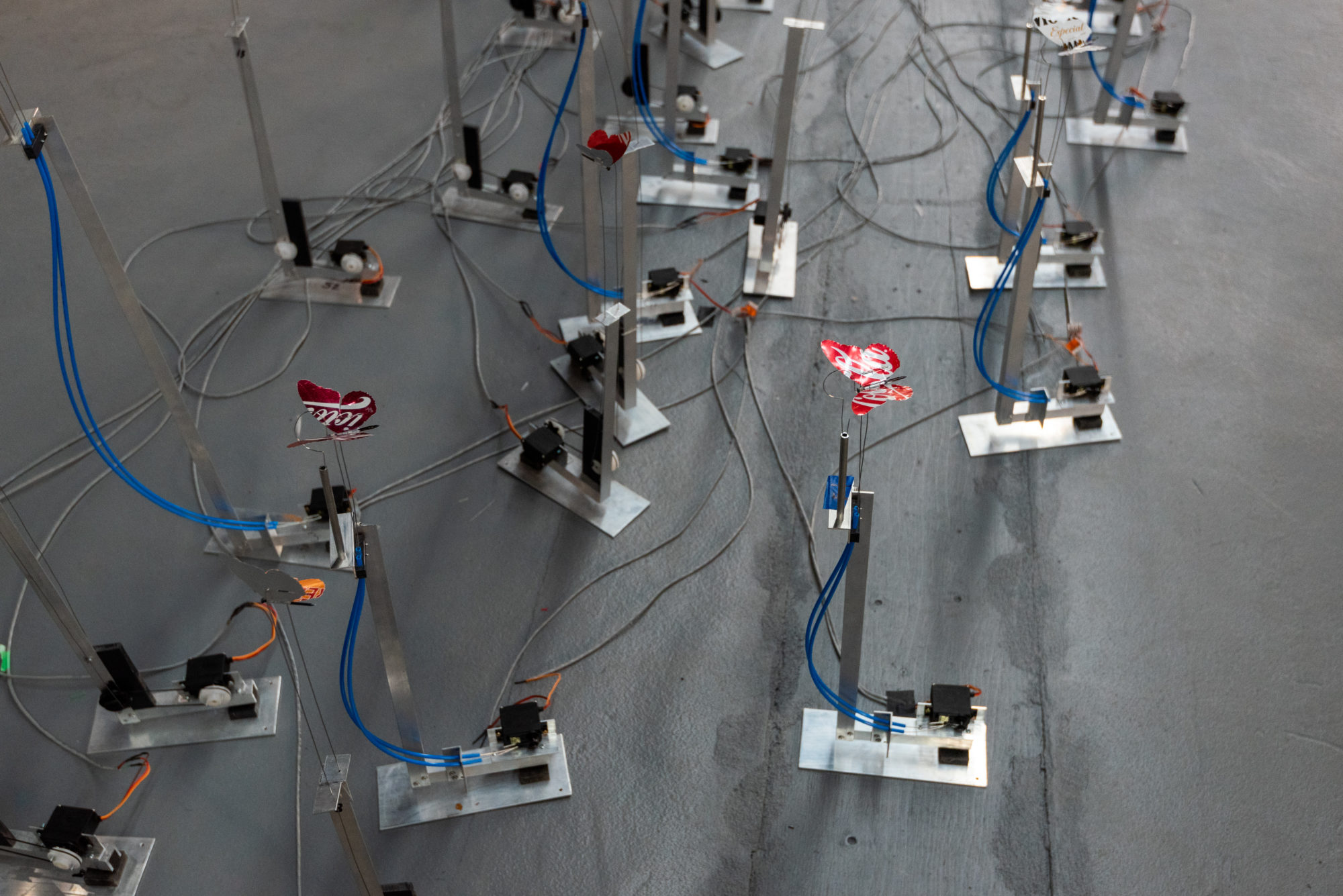 Vancouver-based Sioux artist Dana Claxton filled a series of LED-lit boxes with portraits of Indigenous women. The light is a testament to their resilience, and the layers of cultural accessories allude to an identity based on kinship: 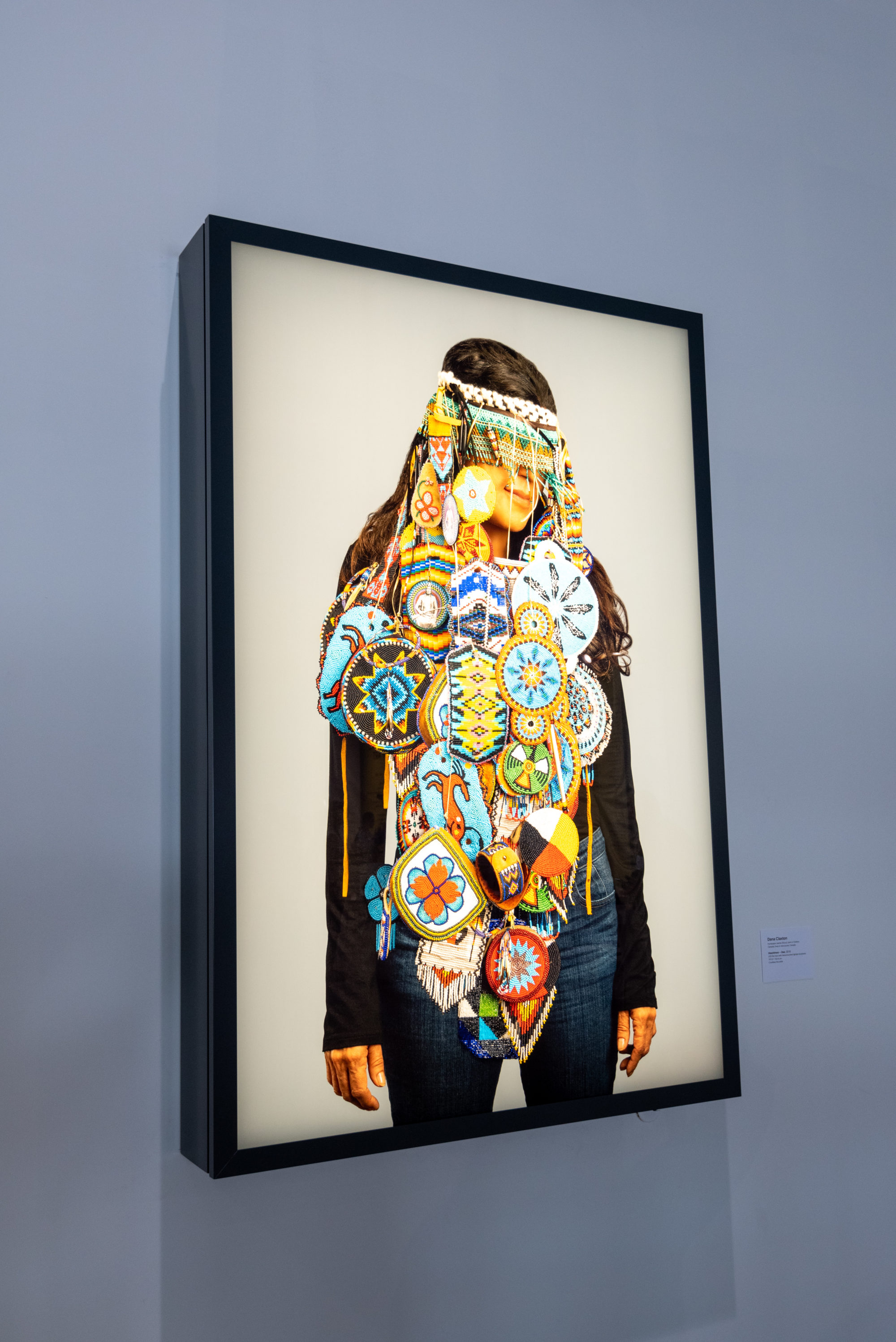 Local artist Curtis Talwst Santiago has been creating mixed-media dioramas inside reclaimed jewellery boxes since 2012. This installation brings together 47 of these works, often made from found materials, that highlight the intersection between identity, alternative histories and personal narratives: 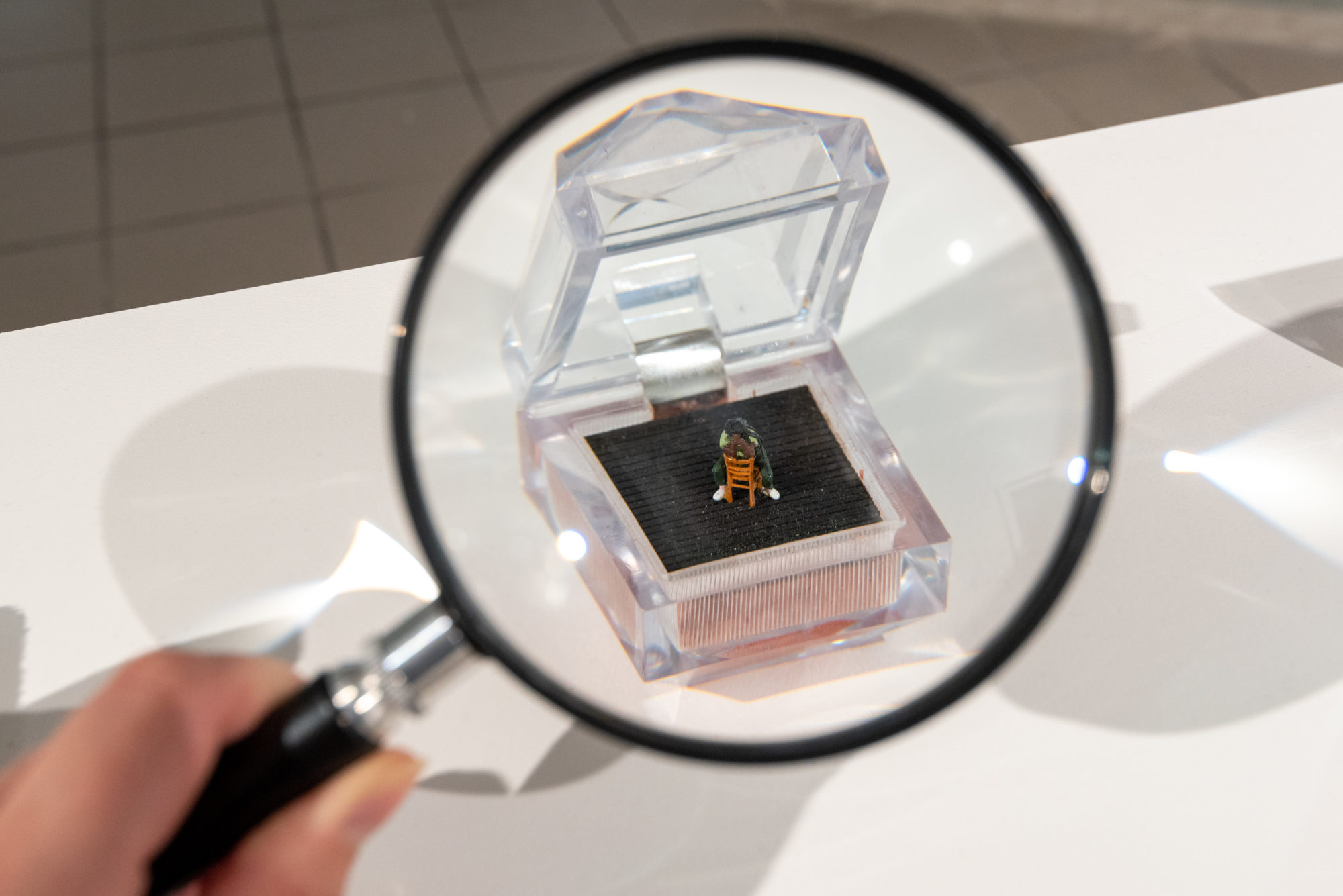 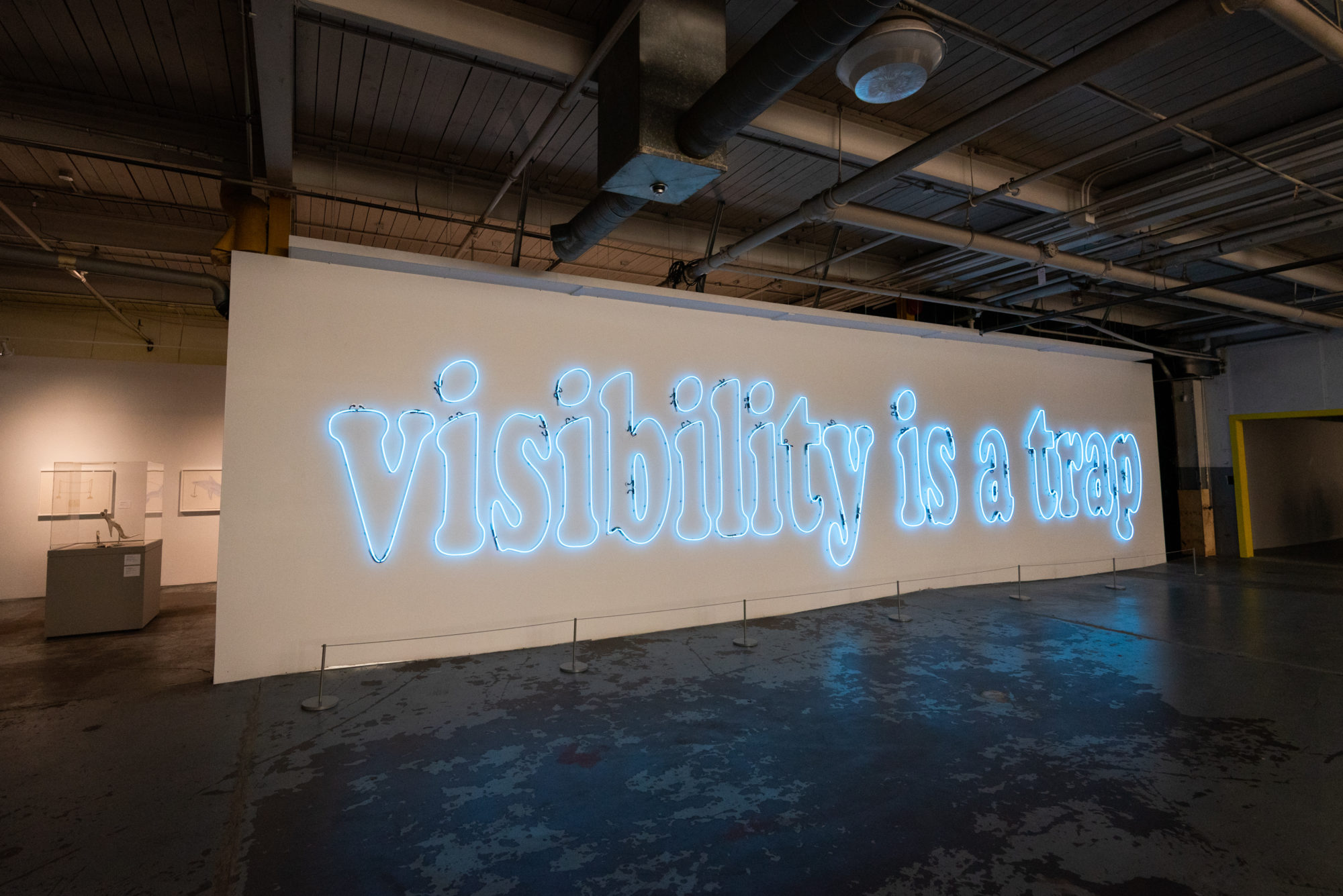 This piece belongs to a multi-part installation by NYC-based art collective The New Red Order. The piece is called “Never Settle,” and plays with the idea of recruitment, inviting viewers to join a secret society: 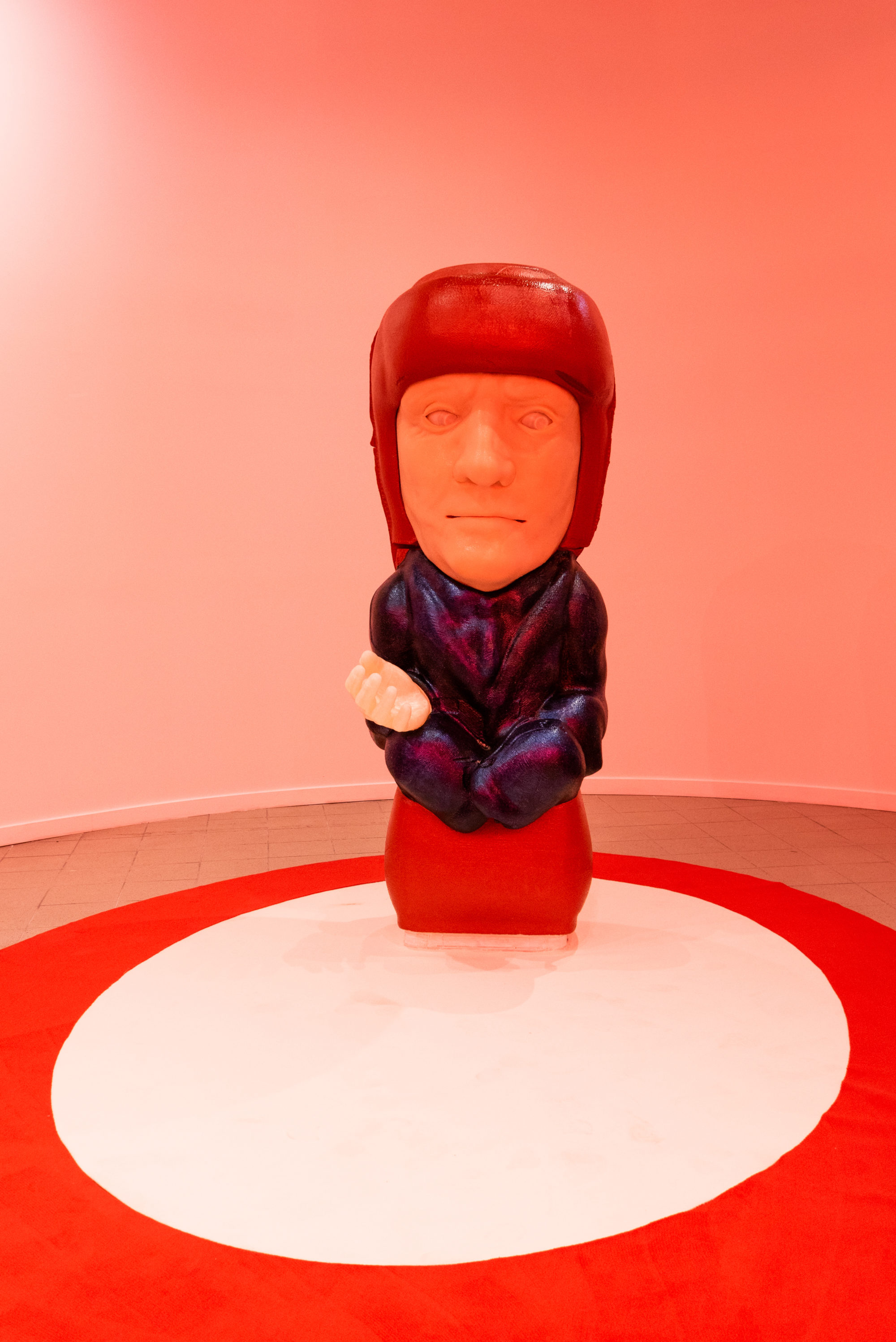 In Toronto artist Syrus Marcus Ware’s mixed-media installation, he imagines a futuristic world where a few minorities have survived white supremacy and climate change, escaping to the only habitable place on earth: Antarctica. Their task is to form a new colony: 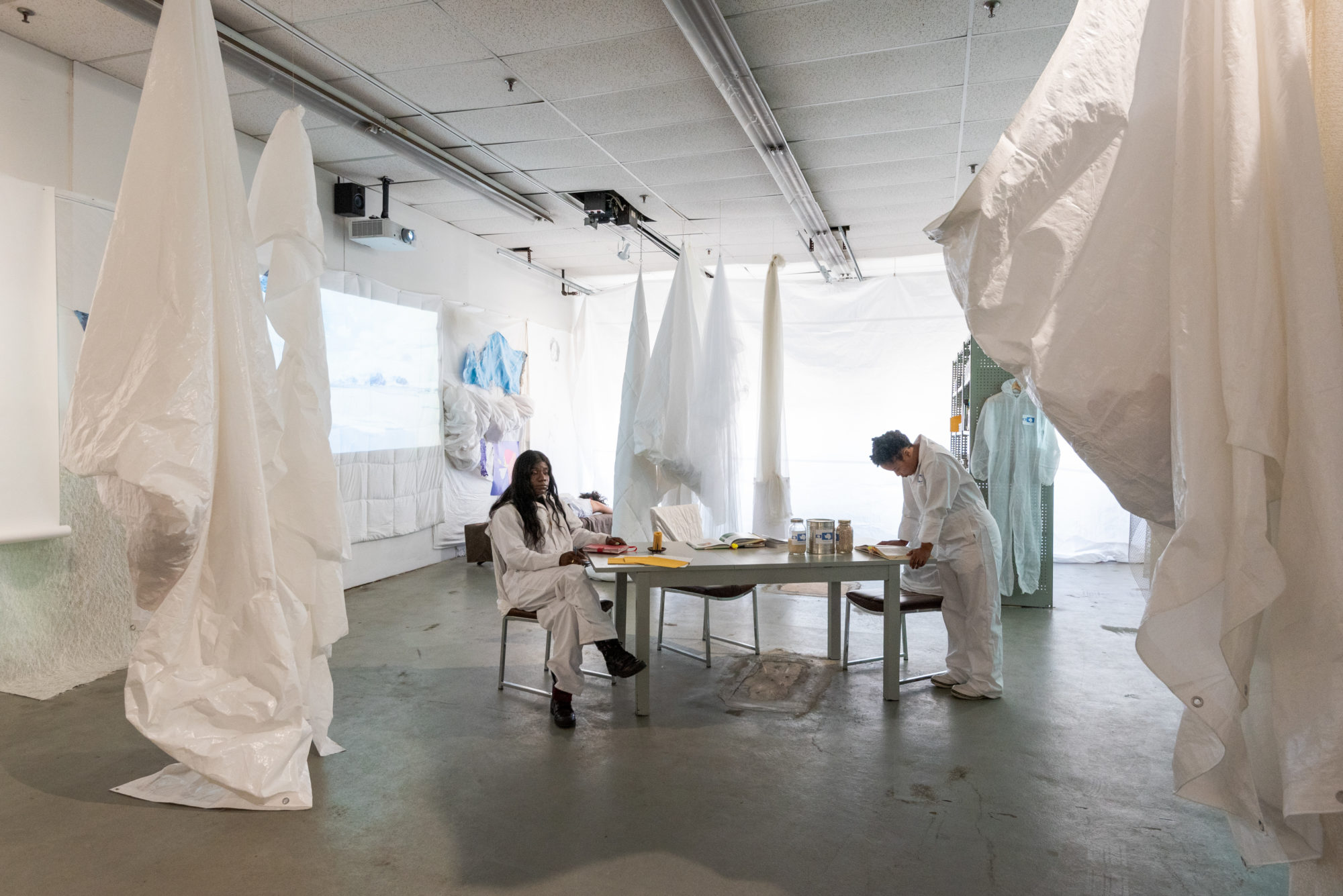 This piece documents a procession called The Long-Cut (or Sinaaqpagiaqtuut), which began in Kinngait, Nunuvut. The procession was designed to showcase numerous sculptures, banners and accessories made by Kinngait youth in collaboration with Toronto’s Oasis Skateboard Factory. Photos of the procession are also on display, confirming ties between Kinngait and Toronto: 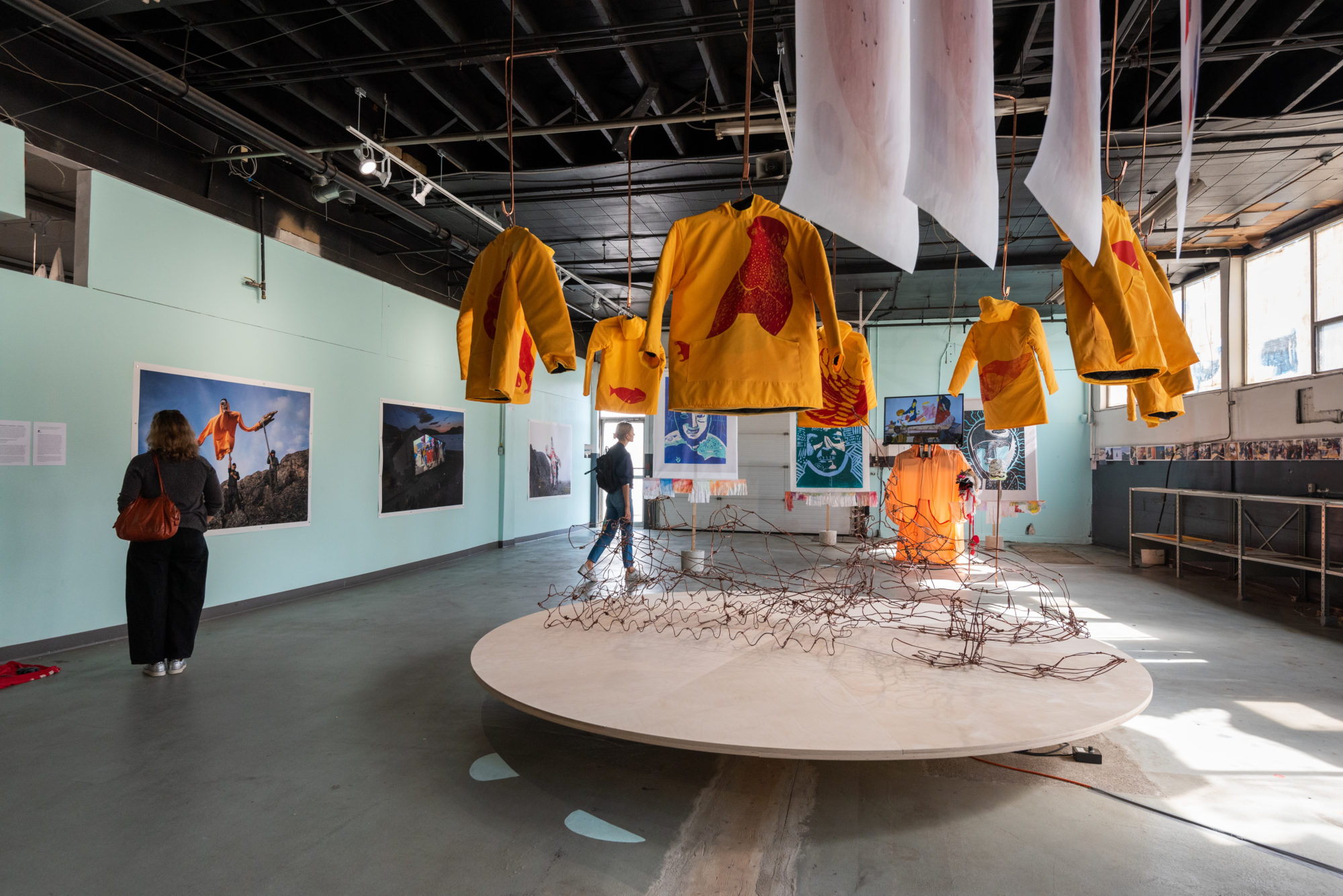