A fire-breathing dragon, a giant jackalope and an ark: the coolest Toronto-made art at Burning Man

A fire-breathing dragon, a giant jackalope and an ark: the coolest Toronto-made art at Burning Man

The annual jamboree of hallucinogen-assisted self-expression kicked off this past weekend in Nevada’s Black Rock Desert. Among the festival’s eclectic creations are a few made-in-Toronto masterpieces. Here are our favourites:

Measuring 19 feet high and 30 feet long, Toronto’s OG art car (built in 2017 atop a GM bus) has articulated wings, a moving jaw that shoots fireballs up to 25 feet and an LED exoskeleton. Dubbed Heavy Meta, the dragon has appeared at over 35 events across North America. It takes over five days to drive the disassembled vehicle from its home at the 4tress fabrication shop on Geary Avenue to the festival.

This is the Ikea of art cars, according to its co-creator Jonathan Stein. “Ark Car” (technically, an ark truck) can be completely disassembled and packed flat into the back of Stein’s GMC Sierra 3500, which is hidden beneath the wooden planks. The cargo onboard includes 10,000-watt speakers, colourful LED lights, propane-fuelled pizza ovens and a pillow-filled lounge or “plounge,” as Stein calls it. Once assembled, the ark can host up to 75 revellers dressed in animal costumes—not quite as many as Noah’s, but it’ll do.

A troupe of fire dancers

Fittingly, Burning Man has a fire conclave made up of pyrotechnic pros from around the globe, who perform in a ritualistic blitz of flames partway through the festival. Among them is Crimson Fire, a troupe of all-women circus performers who met through Toronto’s flow arts (dance, juggling, fire-spinning, hooping) community. They incorporate more than 100 blazing props into their routine, including crowns, hoops and wings. In 20 minutes, the group goes through six cans (about $150 worth) of gasoline. Backstage, there’s a crew of 10 people dedicated to extinguishing the props and making sure no one turns into a real-life Ghost Rider. 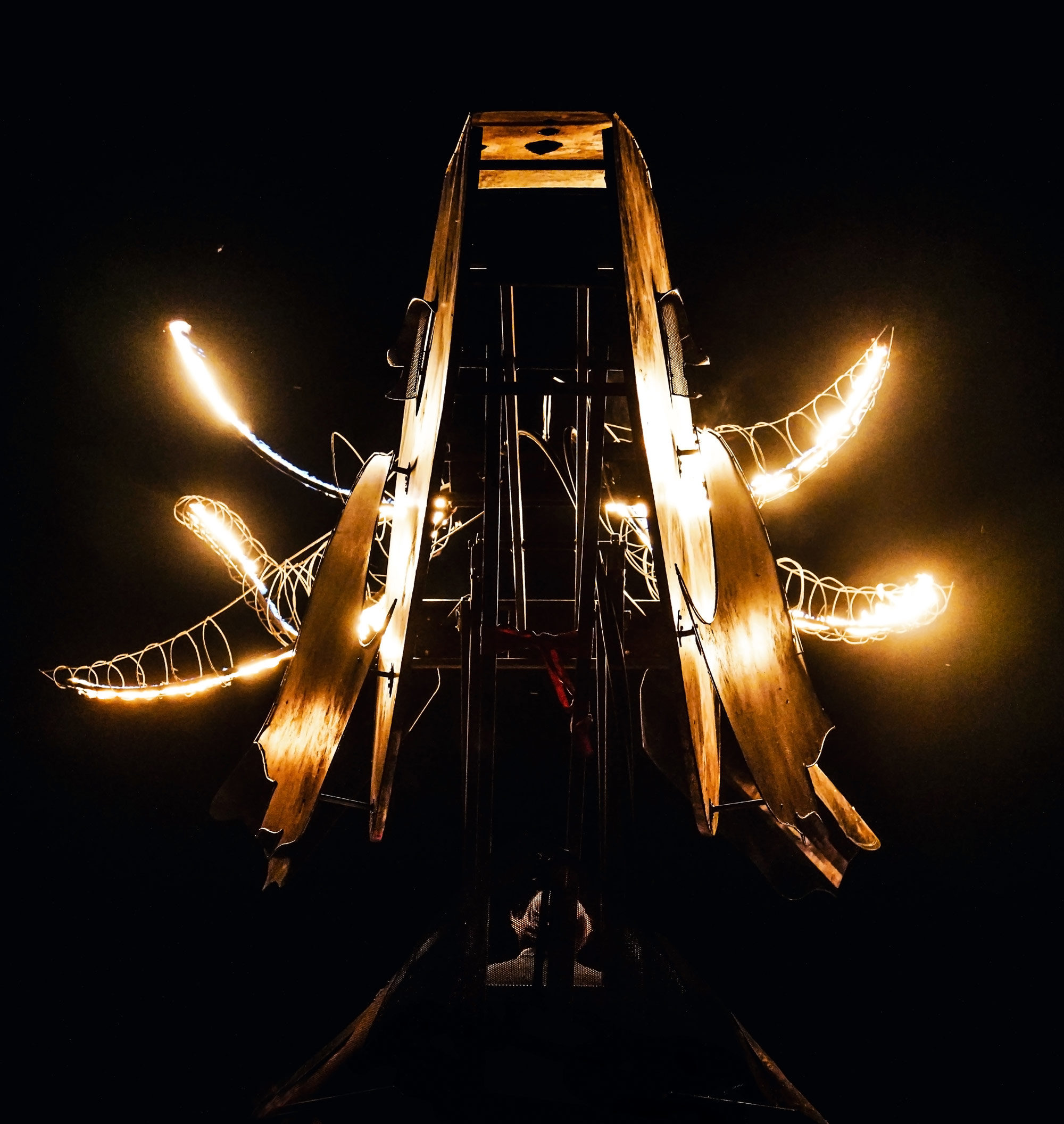 The jackalope, a jackrabbit with antelope horns, was the inspiration behind Tarna, a GM school bus turned mythical creature. A Toronto-based welding group constructed it out of steel, giving it shiny skin panels, a cage heart and pipe antlers that shoot fire on command (because Burning Man). Tarna’s belly is a chill-out zone, complete with pillows and string lights that evoke the Hayao Miyazaki film Howl’s Moving Castle.

If David Lynch and George Orwell collaborated on an art installation, you’d get the aptly named Heads Project. These floating craniums rotate 360 degrees on illuminated podiums. Each one has a built-in camera hooked up to a live video feed, allowing its operators to control them based on where people are in the space (so if you feel like you’re being watched, you are).