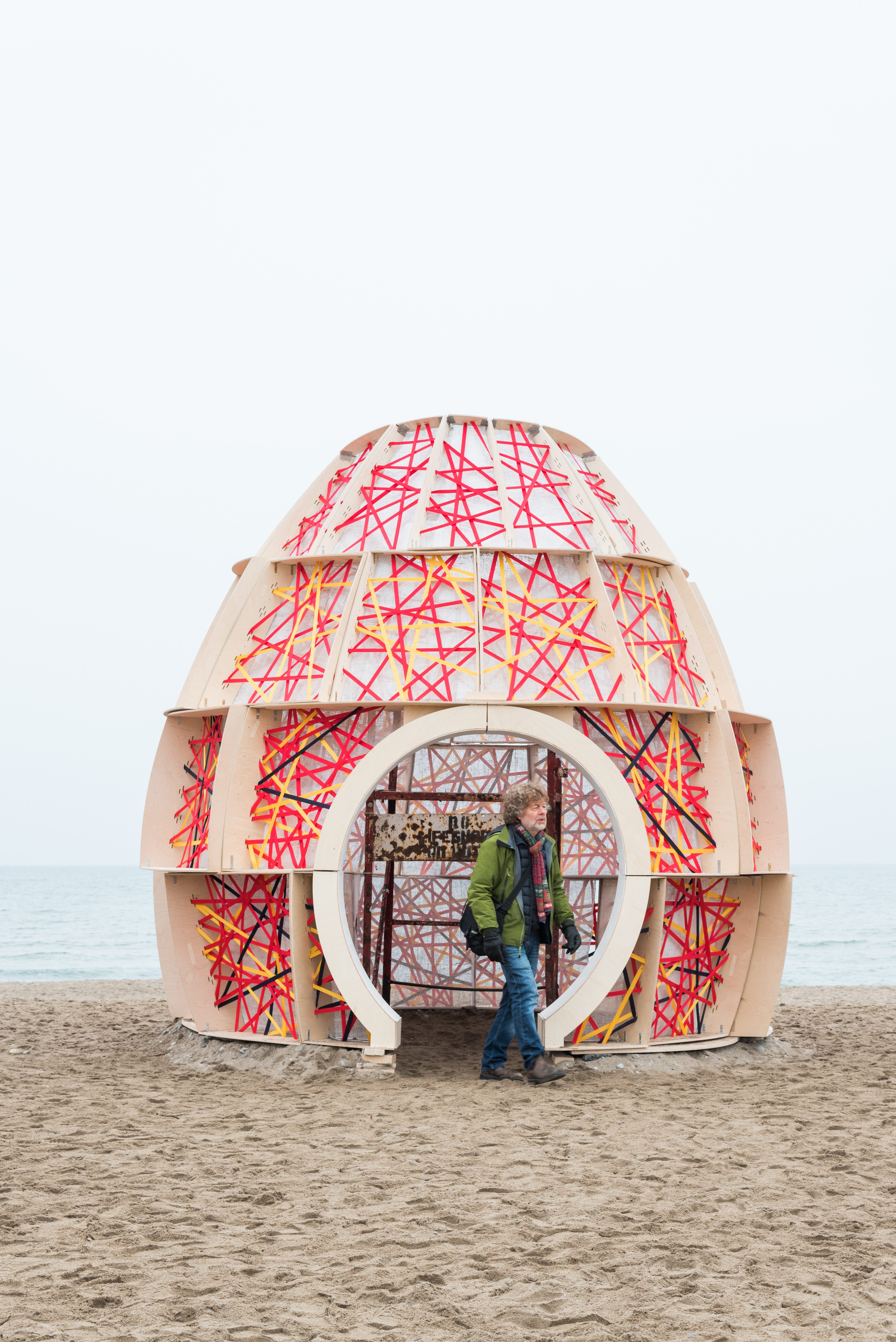 This year’s Winter Stations are not playing it safe. The 2018 edition of the annual design competition, which turns Toronto’s east end lifeguard stations into pop-up art installations, taps into the current political upheaval with the theme “Riot.” From hundreds of submissions, judges selected seven projects that bring a frenzy of colour and commentary to the shores of Lake Ontario. Until April 1, you can find a giant feminist toque, megaphones and spinning pinwheels just south of Queen Street East. We spoke to the winning designers to find out more about their revolution-inspired sculptures. 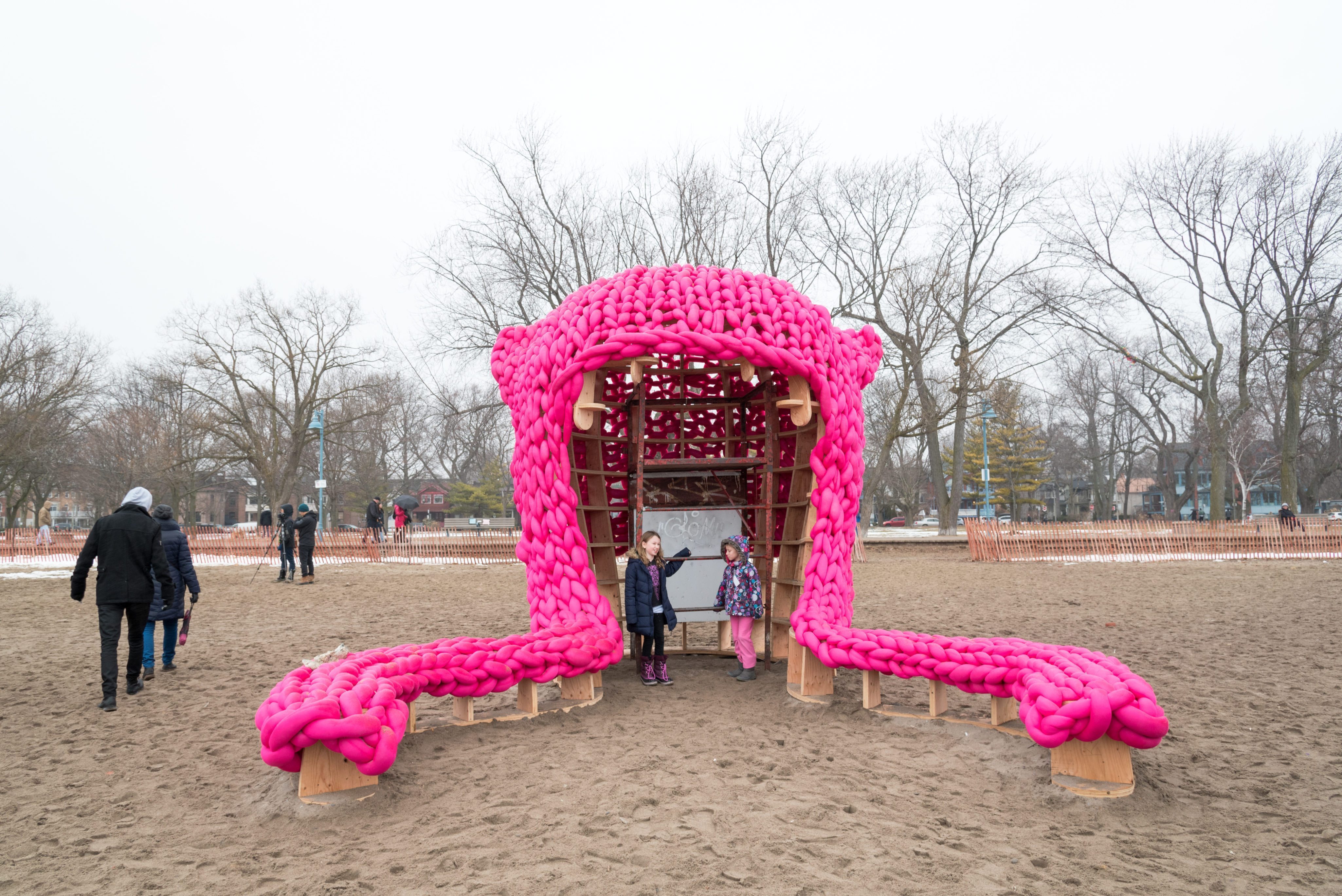 Martin Miller and Mo Zheng • U.S.
Miller and Zheng’s cozy, quirky cabin is a play on the ubiquitous symbol of the Women’s March: a giant yarn pussy hat placed on top of a wooden shell. They hope it will inspire visitors to have open, respectful dialogue about social change. “As architects, we always hope to creative positive spaces,” says Miller and Zheng. “We want the hut to be a space of sharing and growth, acknowledgement and advancement.” 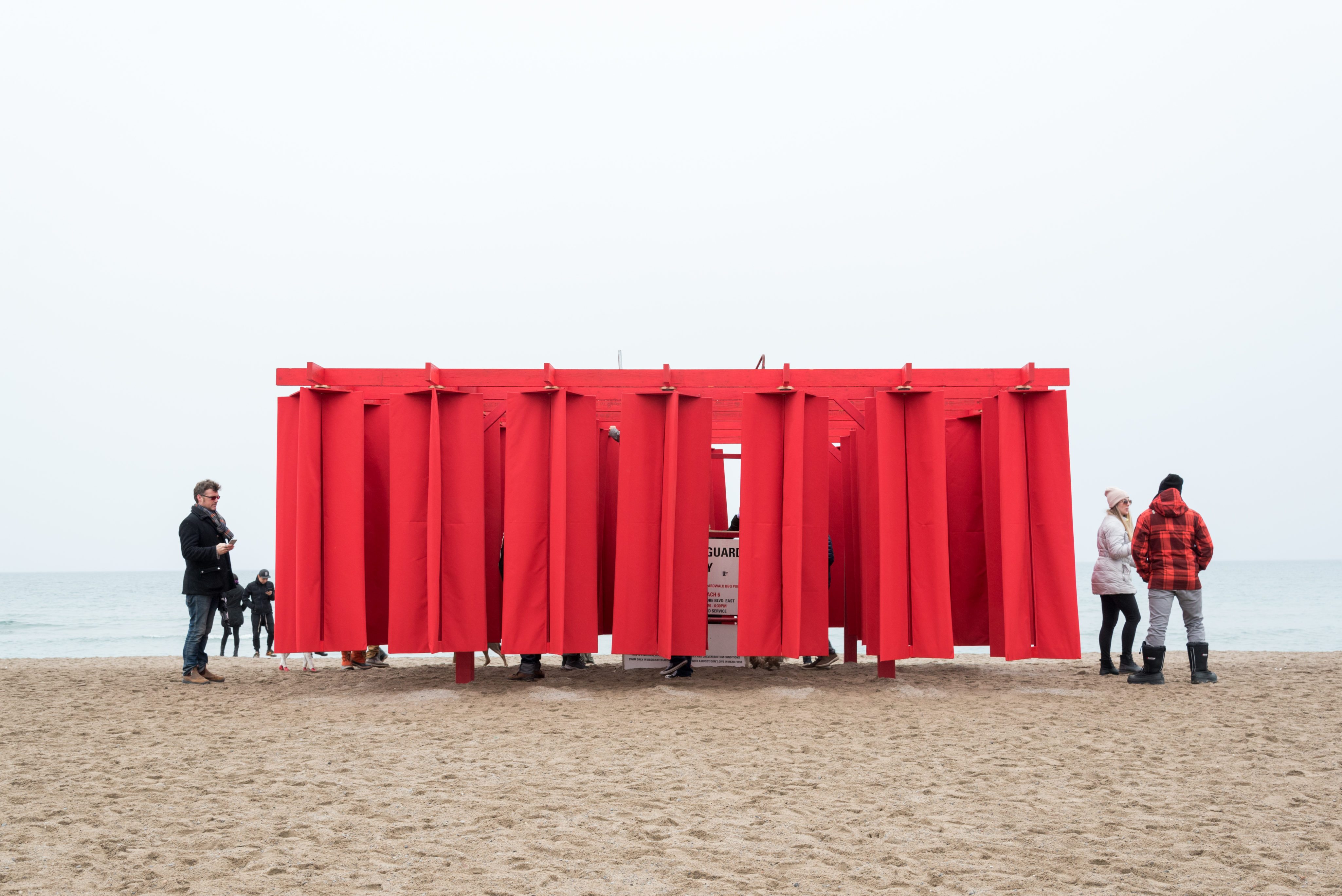 Kien Pham • U.K.
Obstacle is a grid of nearly 50 revolving door–like columns. Visitors can either plow their way through inconsiderately, potentially blocking others’ paths to the lifeguard station in the middle, or show compassion and work together. “Those moments…are when we can show our humanity,” says Pham. “[It’s like] how people smile and say ‘thank you’ when you hold the doors for them—it’s a nice feeling for both parties.” 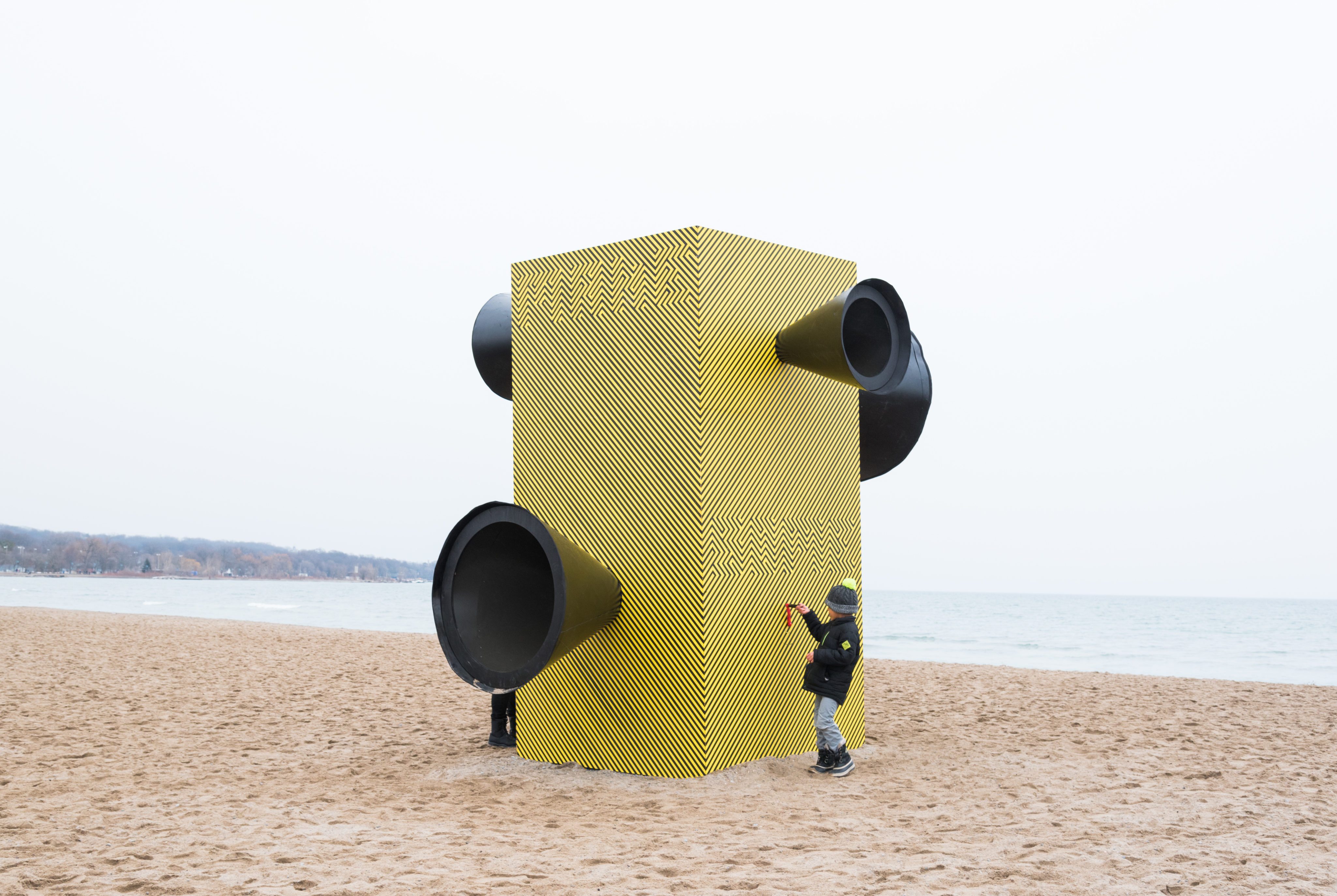 Alexandra Grieß and Jorel Heid • Germany
This “noisebox” is inspired by Italian futurist artist Luigi Russollo and Russian avant-garde artist Arseni Awraamow, and invites visitors to get loud. Visitors turn a number of cranks that create a cacophonous wailing from a number of sirens. “It can be a lot of fun and liberating to make some noise for, or against something,” say Grieß and Heid. “Plus, a single voice can be loud, but several voices are even louder.” 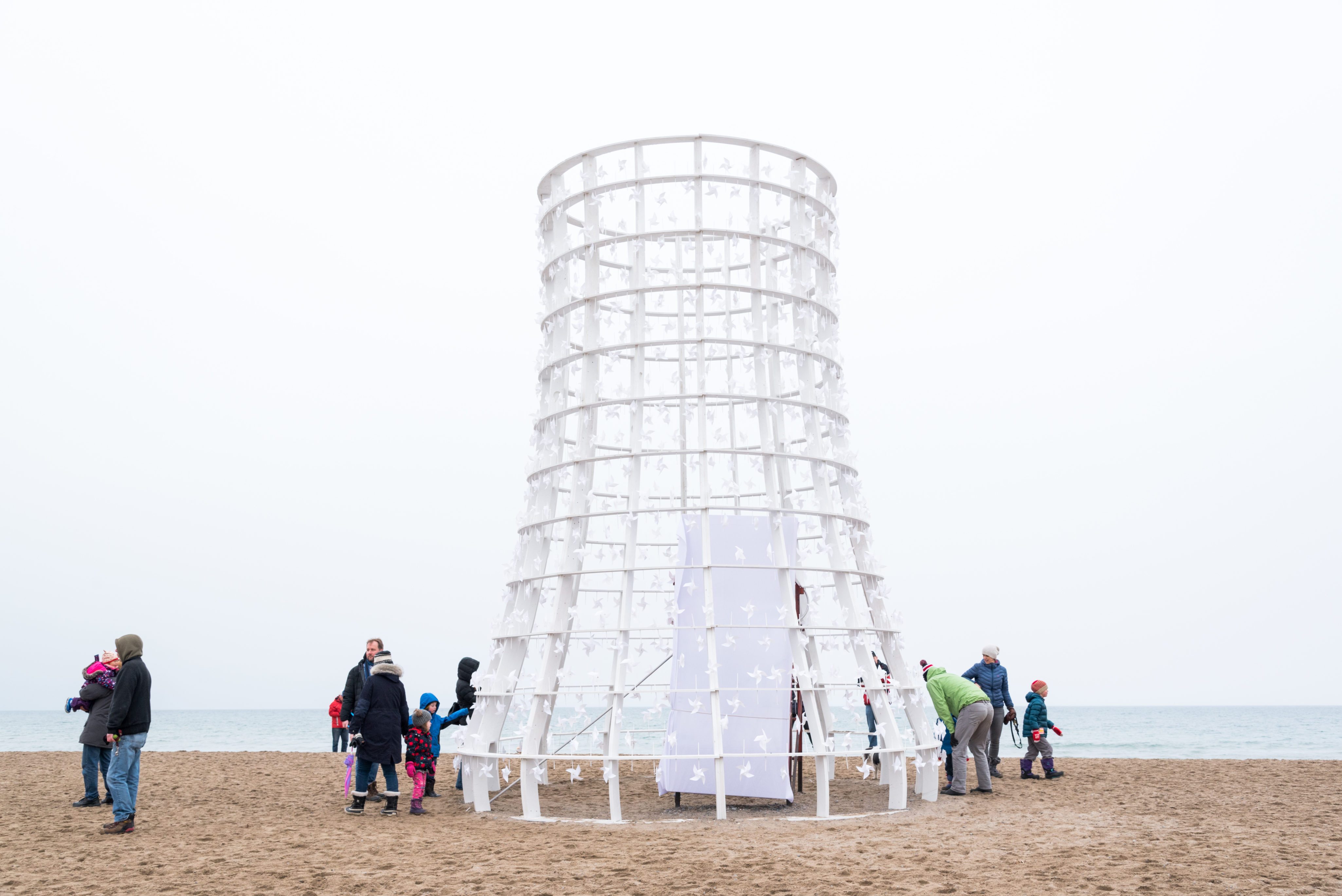 Paul van den Berg and Joyce de Grauw • Netherlands
From afar, Wind Station looks like a nuclear cooling tower. “It’s a dirty, old-fashioned, unsustainable and dangerous way to provide energy,” says de Grauw. The structure, however, is actually made from hundreds of toy pinwheels that symbolize and celebrate clean and safe energy. As the end of the exhibition, the designers will dismantle the tower and give the pinwheels to children. 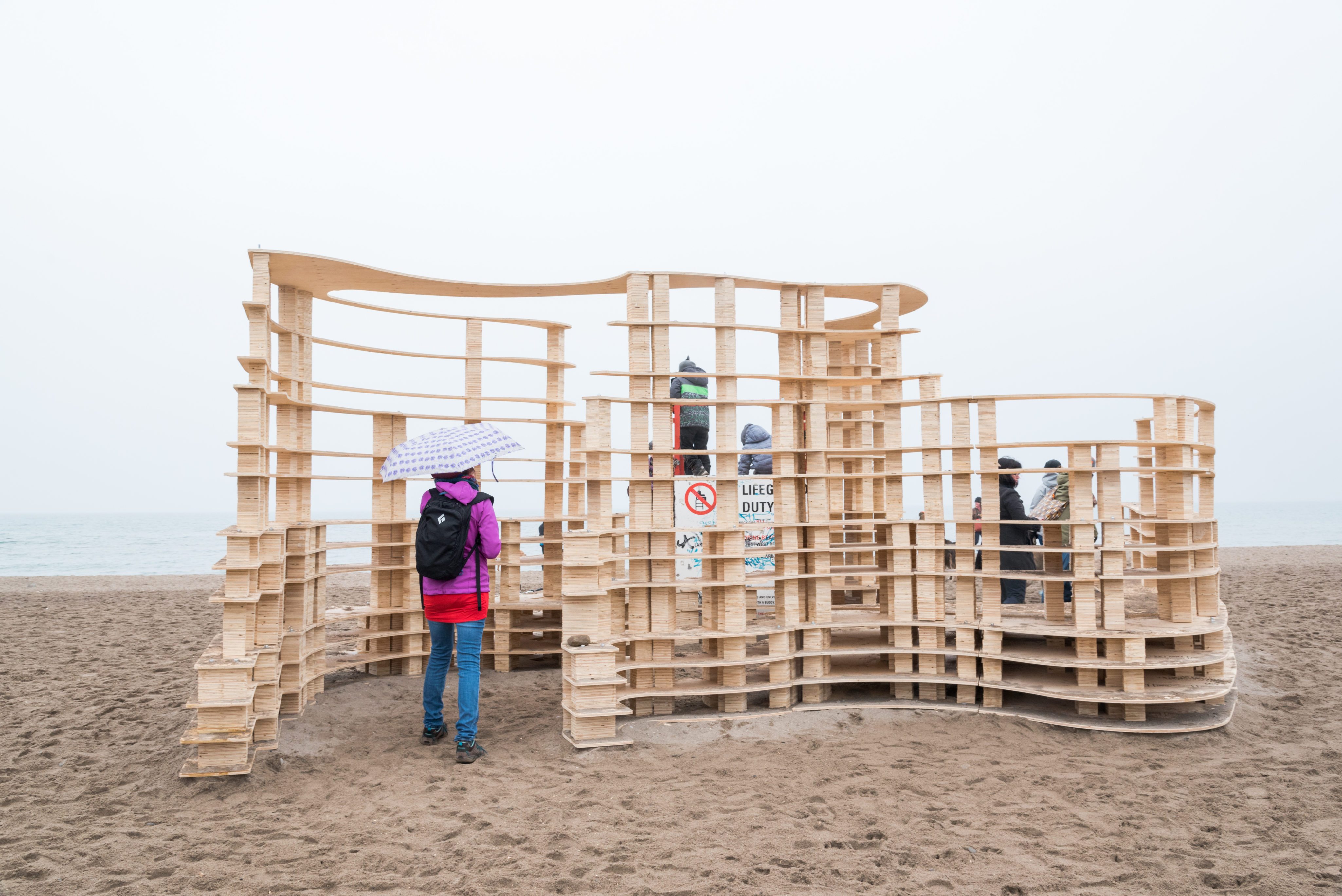 University of Guelph’s School of Environmental Design and Rural Development • Canada
This wavy tunnel mirrors the topography of the Don Valley: the structure wraps around the lifeguard station in the same way the lands rises and curves around the Don River and DVP. The installation is made from plywood frames, supported by steel rods. The designers hope that it reminds visitors that our environment is changing around us—that people are not something that just “happens” to nature, but that we’re part of its evolution. 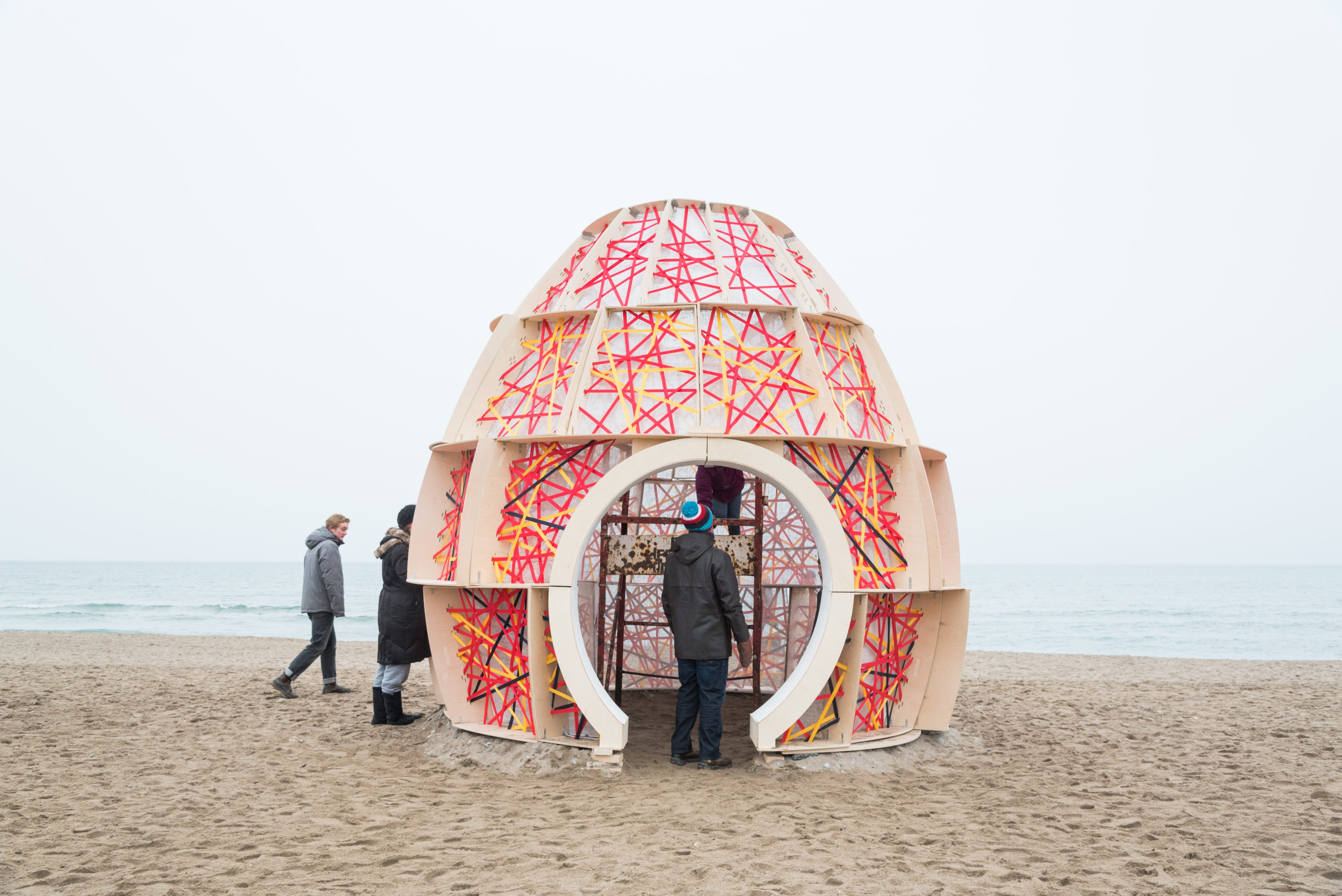 Ryerson University • Canada
The team from Ryerson University studied the impromptu structures that protesters construct during demonstrations: roadblocks, statues, temporary shelters. “People tend to grab whatever is ready at hand to construct something to get their point across,” says team member Arnel Espanol. “They’re often disorderly and raw.” They wanted to replicate that makeshift approach with Nest, an egg-shaped structure made from birch plywood, burlap, and webbing straps (commonly found on backpacks). 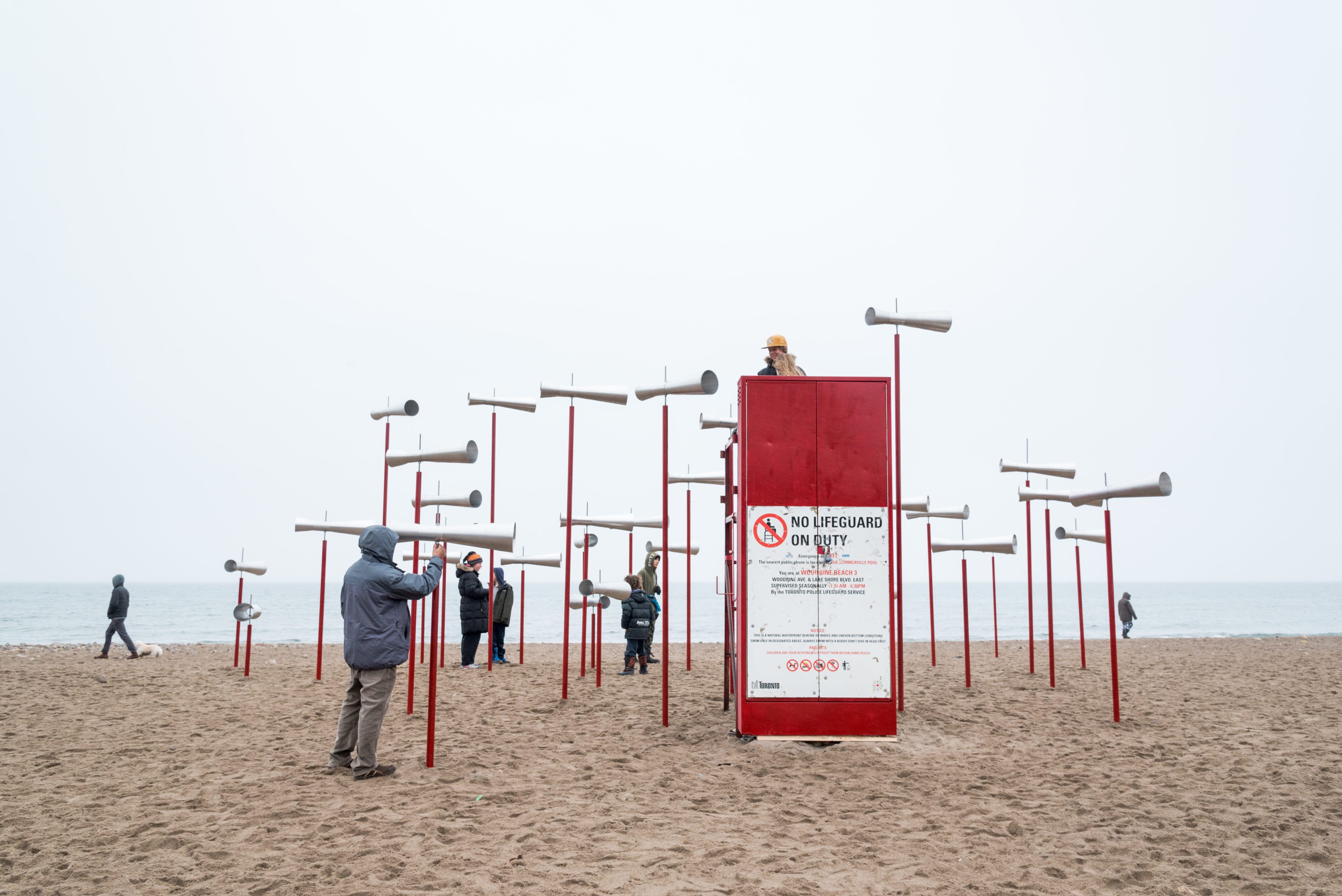 OCADU team • Canada
Revolution is a field of pole-mounted megaphones for visitors to speak into. Its creators hope to convey a nuanced message about the dual nature of riots and revolution—that there’s a fine line between power in numbers and the mob mentality. “The installation reveals how the voice of the people are empowered by their numbers,” says team member Ben Chang. “Yet there is also a tendency for humans to blindly follow one another.”