Daniel Ng is a full-time TTC streetcar driver, part-time Toronto Police auxiliary officer and full-blown Lego enthusiast. For the past year and a half, he’s combined his professions and passions by creating hundreds of hyper-detailed Lego police officers, paramedics, firefighters and TTC staff. Ng started building his empire of bijou public service workers after seeing a Lego version of a TTC streetcar, which triggered an online goose hunt for specific pieces. Soon, he made Lego officers modelled after his friends at 43 Division, where he’s an auxiliary officer. Then he started making figurines from other police units, too, like the emergency task force, forensics and public order. Through his Instagram account, LegoCopGTA, Ng hopes to portray a fun, more positive side to policing in the city. Here, Ng shows us some of his favourite Lego creations and how he made them. This room in Ng’s Scarborough condo is where he makes everything in his Toronto Lego world. The desk actually belongs to Ng’s wife, who uses the space to make cards and stationery. (She’s apparently not a Lego fan.) The roof of the streetcar comes off to reveal rows of seated passengers. Because the pieces are hard to find, sometimes Ng has to settle for older, yellowed white bricks—fitting, he says, since our aged streetcars look like that anyway. Ng buys all his heads individually from third-party Lego resellers. The generic yellow heads cost around 50 cents apiece, but heads in other skin tones cost around $5 to $10 each. Ng builds each figurine piecemeal: he searches online sellers for specific body parts (heads, torsos, hands and legs) and accessories (briefcases, hats, vests and weapons). Once he has the basic pieces, he prints off miniature insignia on paper and carefully glues them on. For these two OPP officers (left), he added the arm patches, the blue stripe on the hat and the police lettering on the vest. The guy on the right is from the Explosive Disposal Unit. These two officers are from Toronto’s canine unit. When Ng makes specific uniform details—like the baseball cap patches and name tags seen here—it can sometimes take him hours to properly shrink the images to scale. All of the patches are based on hi-res images he finds online. This officer is from Toronto’s forensics unit. After a year and a half of practice, Ng can make a Lego character in about 30 to 45 minutes—not including the time he spends researching images or ordering specific body parts online, which come from all over the world. Ng tweaked the interior of an existing Lego bank kit to make it resemble a Toronto police station. Here’s the public order unit, which is called for search missions and crowd management. This is the 911 dispatcher, the behind-the-scenes worker who takes calls and sends police, ambulances and firefighters to emergencies. Ng customized one of the computer screens to show a map of Toronto. The officer on the left is from an auxiliary unit. The character in red is a TTC operator, while the guy in the display case is a TTC chief supervisor. Though he’s made plenty of his friends and colleagues, Ng has yet to make a Lego version of himself. 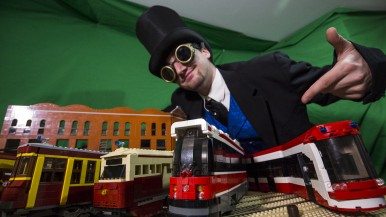 A look at one man’s Lego tribute to TTC streetcars 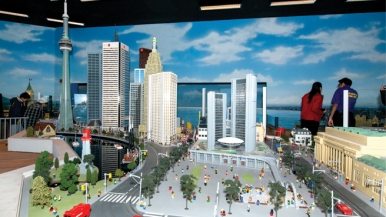 Slideshow: awesome Toronto landmarks made of Lego at the Legoland Discovery Centre