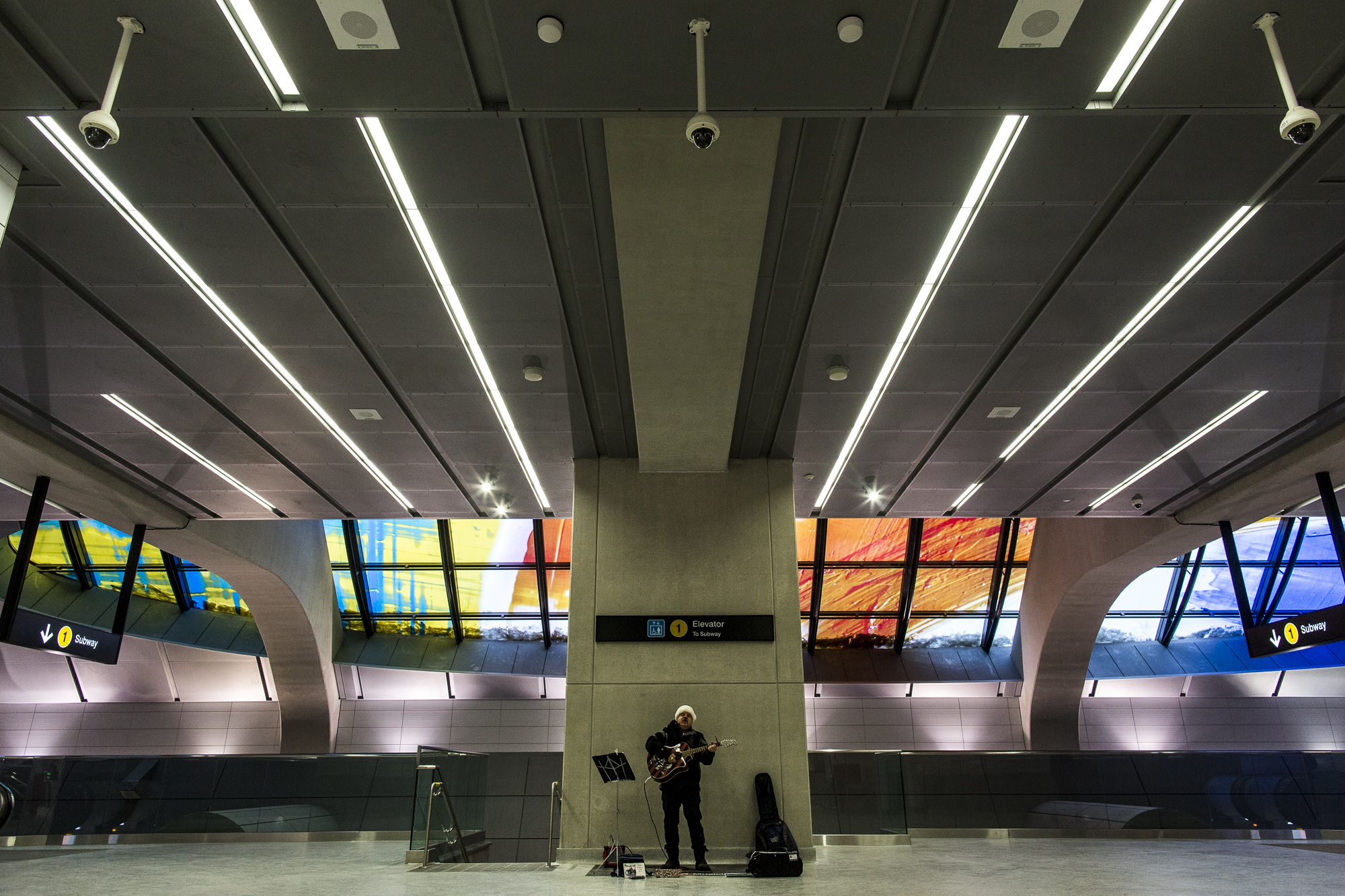 The commute to Vaughan and York University just got easier—and significantly better looking. This week, the TTC opened six new subway stations, its largest expansion in nearly 40 years. Each building features museum-worthy art installations, making the commute feel like a gallery tour. International and local artists worked closely with architects to create integrated experiences. This isn’t art slapped onto the side of a building—it’s an essential part of the structural design. We toured the extension, stop by stop, and asked the project’s public art consultant, Brad Golden, to explain the vision for each station. 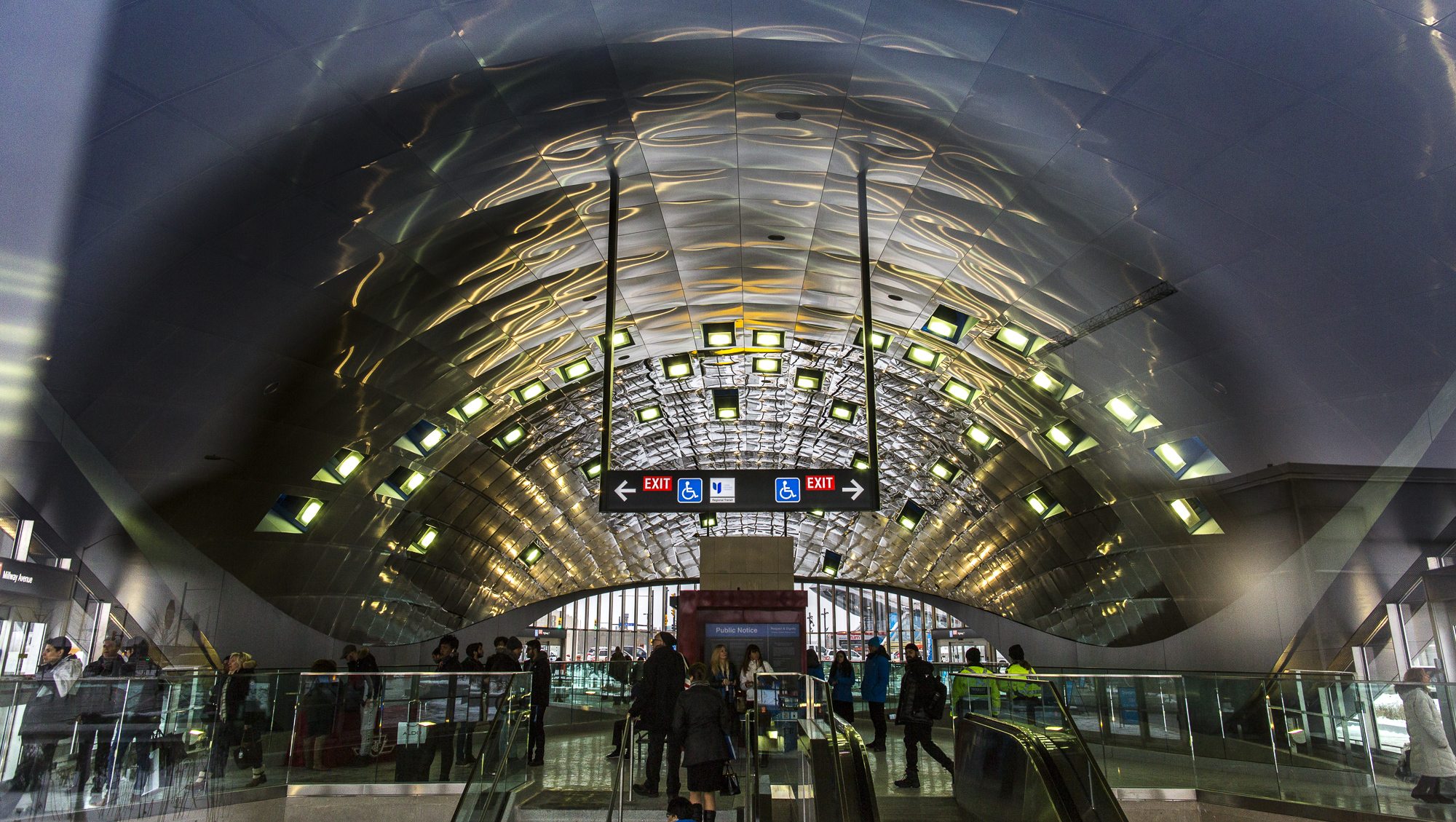 Toronto designer Paul Raff worked with architect Nicholas Grimshaw to create this pavilion-inspired ceiling. Its reflective panels and “light scoop” skylights capture the sun at different angles throughout the day. “As ride out of the underground on the escalator, you ascend into this amazing thing,” Golden explains. “You get fragments of it from below, but as you approach it, the subtlety and details of the ceiling are gorgeous.” 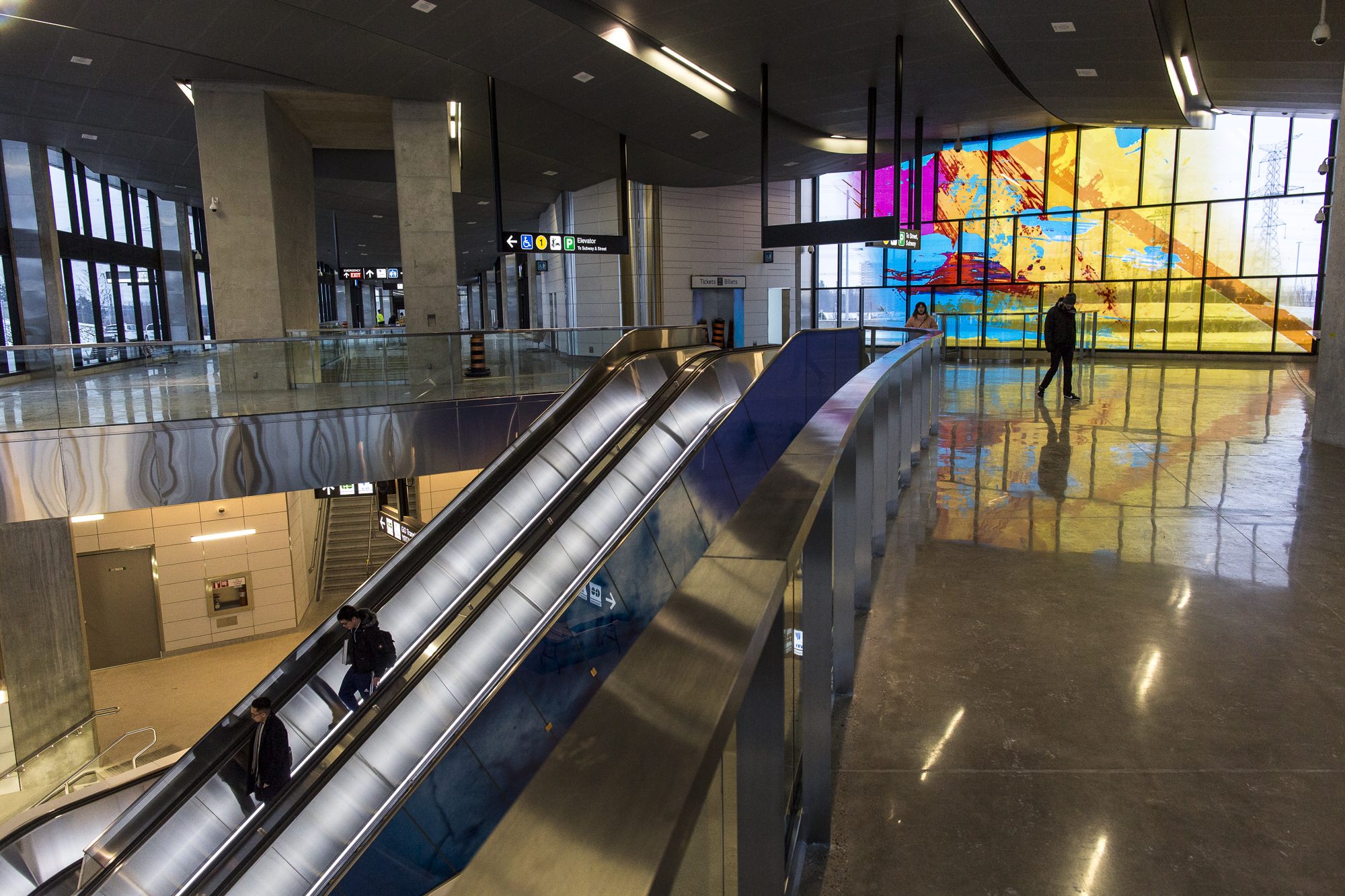 “Subway stations, especially the deep ones, can be very dark and disorientating,” says Golden. The TTC wanted the new stations to be bright, optimistic spaces filled with natural light. “The project wasn’t just about moving people as quickly and efficiently as possible—it was about recognizing that they have souls.” This 100-foot-long silkscreened window by Toronto artist David Pearl (who has created similar pieces in Wales, England and Niagara Falls) sends a splash of bright colour down to the subway platform when the sun is out. 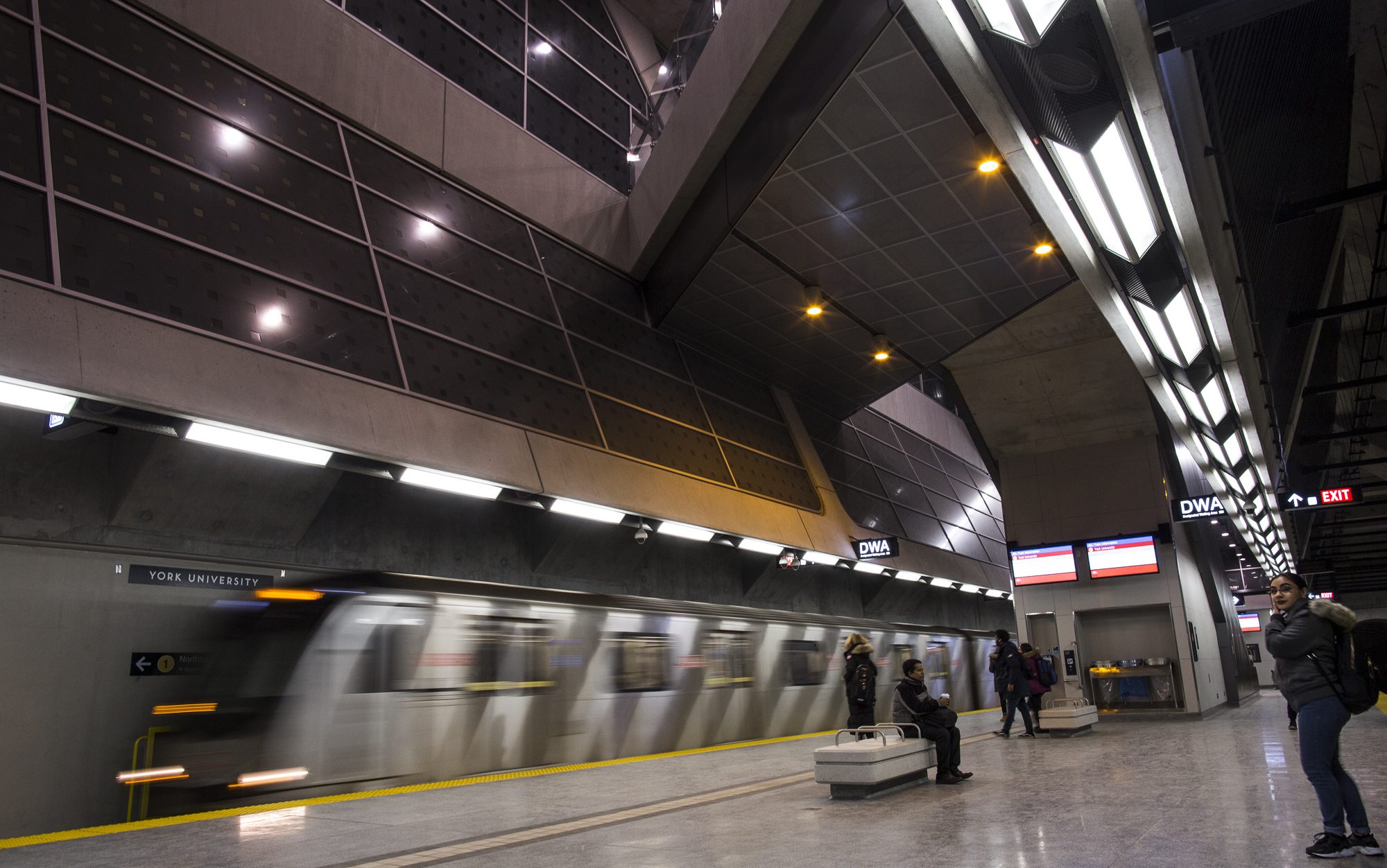 U.K.-based artist Jason Bruges designed Piston Effect, a wall of LCDs that light up subtly when a moving vehicle enters a tunnel. “As you’re coming down to the platform from street level, you can’t see the trains at York University Station, but you can see what’s happening below with Bruges’s pixelated screen,” says Golden. 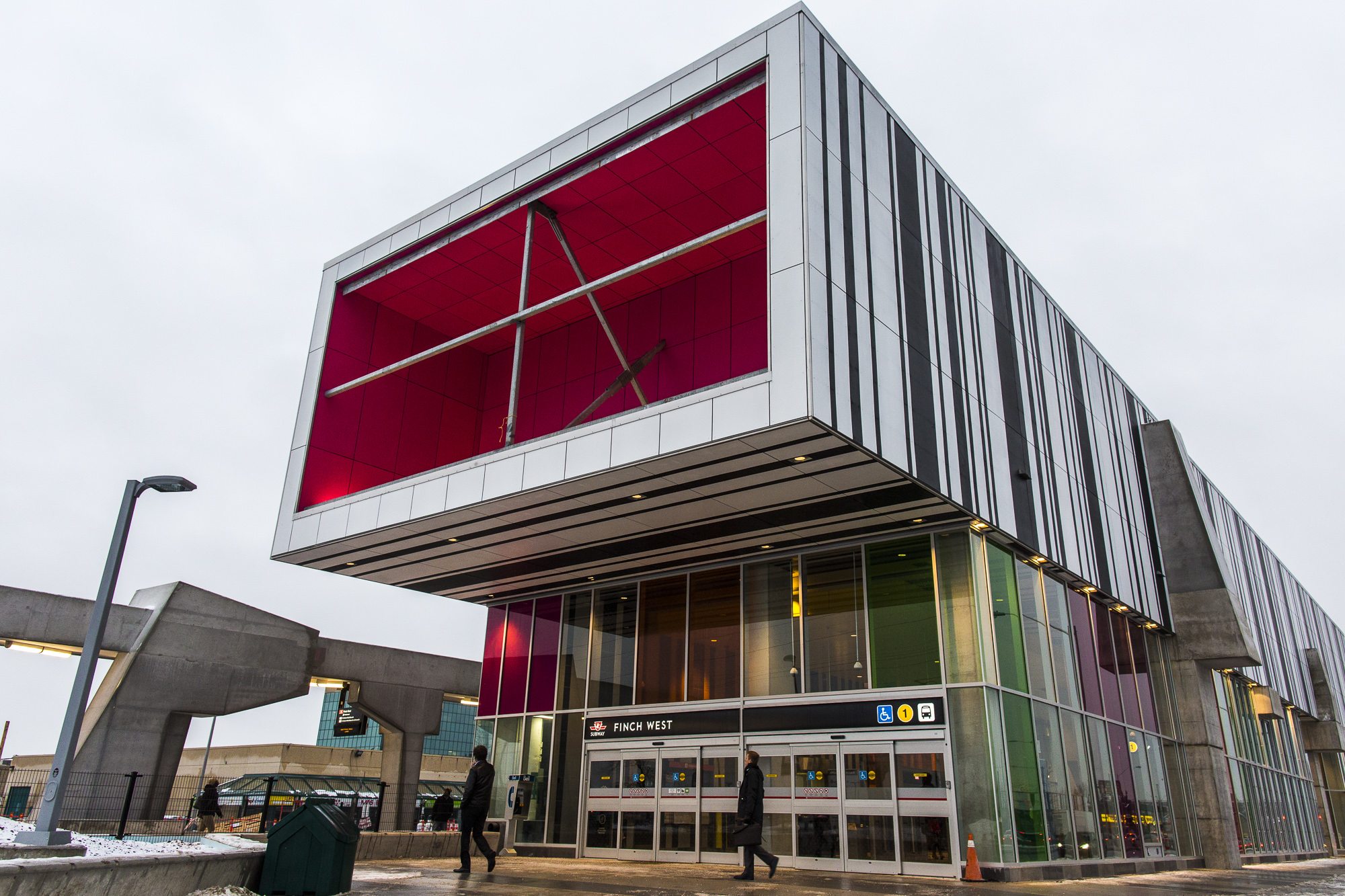 U.K. artist Bruce McLean came up with Finch West’s look: zebra stripes with fluorescent pink and green glass. The top portion of the building is an elevated substation box, a necessary part of the station that is usually hidden. “It’s a playful, colourful, exuberant work,” says Golden. “The building is unexpected in Toronto, where we tend to be much more minimal in our use of colour. On drab days, this will be a very festive building that stands out…. The concrete columns also give the station a sculptural presence. This is a good example of public art being engaging without the intimidation factor of walking into a quiet museum.” 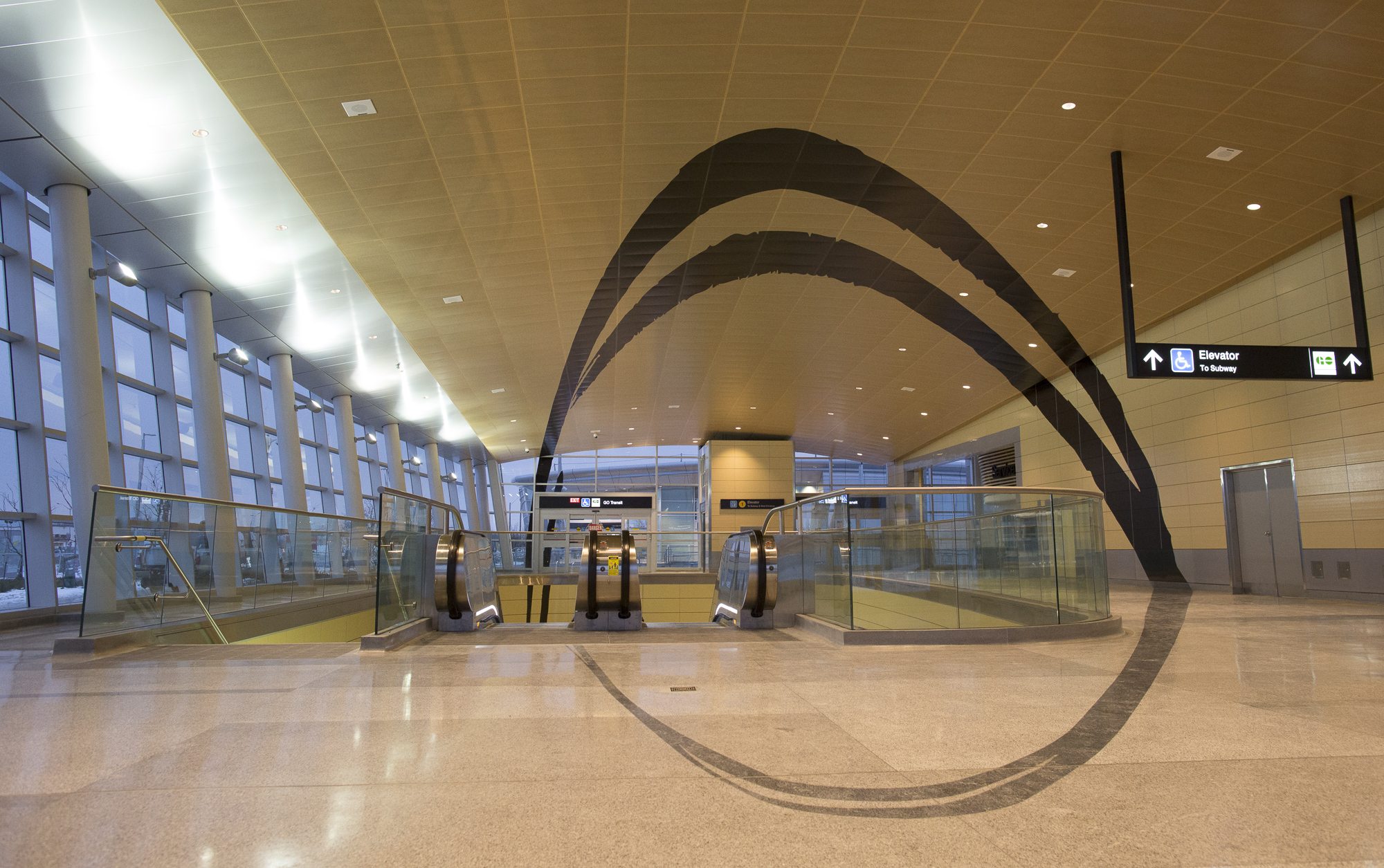 Spin is an installation by Toronto artist Panya Clark Espinal. She created a piece at Bayview station that requires visitors to find a secret “sweet spot” to see three-dimensional images on the wall and floor. At Downsview Park station, she evolved the idea to make one large black brushstroke that connects when viewed from a certain spot. “It’s an amazing feat of construction and coordination,” says Golden. “The work wasn’t painted onsite—all the panels were printed ahead of time. It’s incredible that the artist and architects could achieve this effect.”