Q&A: The nine-year-old triplet entrepreneurs who took their lemonade stand to the next level

Q&A: The nine-year-old triplet entrepreneurs who took their lemonade stand to the next level

Bracebridge triplets Lila, Sadie and Violet Kane have turned lemons into lemonade—and a thriving side hustle. Last fall, their parents bought them a metal lemonade stand, equipped with a cooler and umbrella. Then the sisters spent the off-season creating a business plan, registering the Kane Kids Company and coming up with the perfect citrus sip. This summer, they purchased permits to set up shop at eight different events and fundraisers, with their final appearance taking place at the Huntsville Macaroni Festival on September 14. We spoke with them about the best parts of the beverage biz, their plans for expansion and their advice for budding entrepreneurs.

How did the idea to start the Kane Kids Company come about?
Lila: Well, last fall our mom and dad asked us if we wanted a lemonade stand and we all said yes.
Sadie: Over the past year we decided on a lot of things, like the name and logo. We each drew a picture of what we thought it should be and we all agreed.
Lila: Well, most of us agreed… 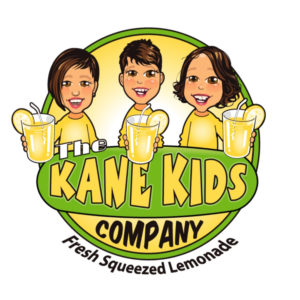 Sounds like there were some differing opinions?
Lila: One logo was a picture of three lemons and the other was of the three of us holding lemonade. We decided to use the second one because if we ever want to expand and do something other than lemonade, it will make more sense. That’s also why we called our company the Kane Kids Company.

What about the lemonade itself? Is it a secret recipe?
Violet: We tried a lot of lemonades. We wanted one that was not too sweet, not too sour. Our secret ingredient is real lemons.
Lila: We each have a job. I squeeze the lemons, Violet adds the ice and Sadie adds the juice, which is water, sugar and citric acid.

How did you decide who does what?
Lila: We do what we’re best at. We also hired a helper to drive us to events and fundraisers around Huntsville and supervise. She takes the money because money is filthy and we don’t want to contaminate the lemonade.

That sounds very responsible. What’s the best part about working with your sisters?
Lila: Well, actually I kind of want to start my own business. I asked my parents if that would be okay.

You want to start a rival lemonade stand!?
Lila: No, not lemonade. I would sell something else. Maybe brownies.

Lila, you’re obviously the entrepreneur of the group. What do your sisters bring to the table? Or the stand, I should say.
Lila: Well, Violet is really happy all the time, so that’s good. And Sadie takes a lot of breaks.
Sadie: Hey!
Lila: Well you do.

It must to hard to go to work while other kids are just hanging around and enjoying their summer.
Violet: I don’t mind. Doing the lemonade stand is more fun than being at home doing nothing.
Lila: I had to miss a sleepover party, but I went to the part before the sleepover, so it was okay. We don’t run the stand every day. I think we’ve done eight events this summer.

What kind of reactions have you gotten from customers?
Sadie: People tell us, “Oh, isn’t that great to see three girls selling lemonade!”

Can they tell you apart?
Violet: Well I have longer hair, and we’re all different heights, so it’s not that hard.

You guys are charging $5 a glass, which is pretty steep. Has anyone complained?
Lila: People don’t mind. We decided we wanted to use biodegradable cups and straws, so that’s one of the reasons it costs more. I think they also like that we donate part of our earnings to charity. When you buy a cup of lemonade, we give you a bead and you can drop it into a jar. Each of us chose a different charity: a hospice, a women’s shelter and an animal shelter.

What kind of profits might you make at a typical event?
Lila: What are profits?

That’s the amount of money you take home after you have paid for expenses like the lemonade and your helper.
Lila: Well, our parents say we have to save most of our money. We are allowed to keep some, though.

Has anyone made any exciting purchases?
Lila: I got a remote-control car.
Violet: I got a bag with a llama on it.
Sadie: I got slime.

Summer is winding down. Will you be back next year?
Lila: We will do the stand again next year. Maybe with more stuff. We’re not sure yet. Our parents think we should keep doing it until we finish high school.

Any advice for other aspiring entrepreneurs?
Sadie: Don’t spend your money.
Violet: Be thankful for your customers.
Lila: Don’t forget to smile.