When Donald Trump won the U.S. presidential election, Canada took notice. As America’s next-door neighbour, we’re an obvious destination of choice for anyone who suddenly feels unwelcome south of the border.

Over the past few weeks, the press has been full of stories about Trump’s first cross-border exiles: people who fled from violence in their home countries, sought refuge in the U.S., and are now attempting to restart their refugee claims in Canada by crossing the border without stopping at an official border station, usually on foot.

These so-called “irregular” crossings are often portrayed as desperate attempts to escape President Trump’s anti-immigrant rhetoric and policymaking, but very little is known about the people who are entering Canada this way. In January and February, the RCMP intercepted fewer than 1,000 border jumpers, the majority of them in Quebec and Manitoba. Politicians and pundits have already begun to fret about a possible uptick in spring, when the weather is warmer and the crossing is less dangerous.

Erin Simpson, a Toronto-based attorney who sits on the executive committee of the Canadian Association of Refugee Lawyers, is one of the people working to find out who’s fleeing the U.S., and why. We spoke to her about the reasons a refugee claimant might attempt a clandestine border crossing, and what happens to them once they enter Canada.

The reason people are avoiding official border stations is the Safe Third Country Agreement, which essentially closes the border to asylum seekers between Canada and the U.S.

In domestic Canadian law, we have an allowance for recognizing what are called “safe countries.” The idea is, if you’re coming from a place where you could make your refugee claim, then you should stay there and make your refugee claim there, rather than going someplace else. So that’s why people come across irregularly: because if they don’t, they’ll be turned away.

And the United States is considered a “safe country.” So if you arrive there as a refugee, you’re legally prevented from coming up to Canada and a refugee claim.
Yeah. The idea is, you’re already in a place where you could make a refugee claim, so why don’t you make it there?

We’re talking about asylum seekers, who are people who physically present themselves in a country and ask for shelter. How is that different from the process we saw with, for example, Syrian refugees?
There are two ways refugees can come to Canada. One is through what’s called “resettlement,” which is where we make spaces available for people who are overseas. Syrian refugees have been arriving through resettlement.

The other big way that refugees come to Canada is through what are called “inland claims.” These are people who have arrived at our borders, either on foot or by presenting themselves at a border. For whatever reason, these people could not wait for resettlement. Possibly they were in danger and needed to find a way to get out. For these people, we have a system set up for determining whether they have a valid claim to refugee status.

When people make these irregular crossings into Canada, what happens next?
Once you’re on the Canadian side, Canada has an obligation to consider the validity of your refugee claim. Right away, you fall into Canada’s inland processing system.

Border authorities just let you go about your business?
Well, not necessarily. The Canadian border has a detention system. There are a number of circumstances under which you might get detained. A good example of that is if your identity can’t be confirmed. You could talk to any refugee lawyer in the city about times where clients of theirs have been inappropriately caught up.

What happens to people who don’t pose any obvious security risk?
I think it’s important to remember that once refugee claimants get here, they’re put into the refugee determination system right away. They aren’t just coming across and then not being identified or processed properly.

There are a series of forms that need to be filled out. They give some basic overview of what the person’s claim is, but they also go into detail about who they are, and who their family members are, and what their background is. They would have a little bit of time to fill out those forms. Once they present those forms, then, at that very meeting, they’re given a list of conditions for their stay in Canada. They have to keep regular contact with immigration authorities, and they’re also given a date to present themselves at their refugee determination hearing. They have to present any evidence they have in support of their refugee claim 10 days before that hearing. If they don’t show up for that hearing, then there’s one additional hearing date. Miss that, and the government would start removal proceedings against you.

Are these irregular crossings a new thing? Obviously, Donald Trump is not an immigrant-friendly guy, but the U.S. has never exactly been super welcoming to immigrants. At least, not recently.
The evidence we’ve seen so far is that the system has been worsening in the past seven or eight years. Donald Trump is taking it to new lows, no doubt—but the truth is, the U.S. immigration detention system is the largest project of family detention since Japanese internment, and that precedes Donald Trump. This has been going on for a while. Seventy per cent of asylum seekers who end up before immigration judges in the U.S. have been detained.

Are border crossers getting any assistance once they arrive in Canada?
The first points of contact for a lot of folks are the amazing resettlement agencies that work close to the borders. In Ontario, many refugee claimants are eligible for legal aid. Lawyers like me are paid to work with them, and then we represent them at their hearings. Legal aid pays for a total of 16 hours of a lawyer’s time, which is really not very much—but it’s still great. We’re so lucky to have that support.

What about things like food and housing?
It really depends on the people. Some of my clients are people who flee and they’re like, a judge and a lawyer, and they arrive with a level of capacity to find a way through the system. For people who need help, there are nationality-specific community organizations that offer a lot of support. And then you’ve also got lots of fantastic resettlement agencies, who help people with housing and getting on their feet.

Also, once a refugee claimant has been referred to the immigration board, they are entitled to a temporary work permit. And they also get access to social assistance.

Oh really? So they can claim some form of welfare, essentially, and the government will cover some of their living expenses.
In most situations people’s significant preference is to work. They want to get their work permits and then start trying to do something.

But social assistance is there if they need it. So if you arrive penniless, with just the clothes on your back, and you’re accepted into the refugee system, you’re probably going to be okay.
Yeah. But it’s obviously in everyone’s interest to help people get on their feet.

In a way, it’s great that there’s so much help for people who are arriving, but it’s also a little worrisome, because that’s such a rallying cry for people who are anti-refugee. They see refugee claimants receiving forms of social assistance and it makes them furious. Do you see any downsides to people crossing the border uninvited and then claiming benefits?
We have international legal obligations. We don’t send people people back to face torture and persecution. It’s a really important component of living in a civilized world. When I speak to my clients, I’m always so struck by how quickly things can change, and how quickly you can go from comfortably planning a life for you and your family, to the political situation changing dramatically and suddenly you’re at risk. We think of ourselves in Canada as being totally removed from all of this stuff that’s going on globally, but the truth is that having laws in place to protect people who are fleeing from persecution benefits all of us, ultimately.

I also think we need to keep it in perspective. Canada has handled higher numbers of refugees than this in the past. It’s perfectly within our capacity to manage. The real story is people being persecuted in the U.S.

Are we going to start seeing more people crossing in the spring, once they can do it in t-shirts and shorts?
A lot of people are saying there will be more people, but nobody knows for sure. If we don’t want people to be coming across irregularly, then we need to open up the borders. That means reconsidering the Safe Third Country Agreement.

Again, though, I think we need to put it in perspective. Even last year, we had higher numbers than we’re likely to have this year. I also think it’s really important to recognize that, when you look at which countries are housing huge numbers of refugees, Canada’s share is a drop in the bucket.

Representing refugee claimants is not a lucrative area of law. Why do you do it?
It sounds hokey, but it is such an honour to work with these people. My clients are incredibly brave and inspiring people who have been through so much, and it is just an incredible honour to be able to walk with them, and to be able to help them get their refugee status here, and to help them maintain their dignity through a process that can be really tough. Anyway, I’m gushing now, but I seriously consider it a total privilege that I get paid to do the work. 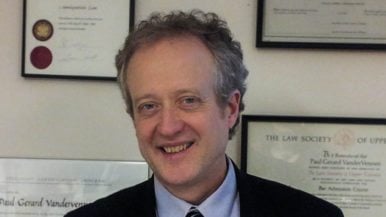