“I had to learn the sign for Covid-19”: A Q&A with Christopher Desloges, who became an overnight celebrity as Doug Ford’s sign-language interpreter

“I had to learn the sign for Covid-19”: A Q&A with Christopher Desloges, who became an overnight celebrity as Doug Ford’s sign-language interpreter 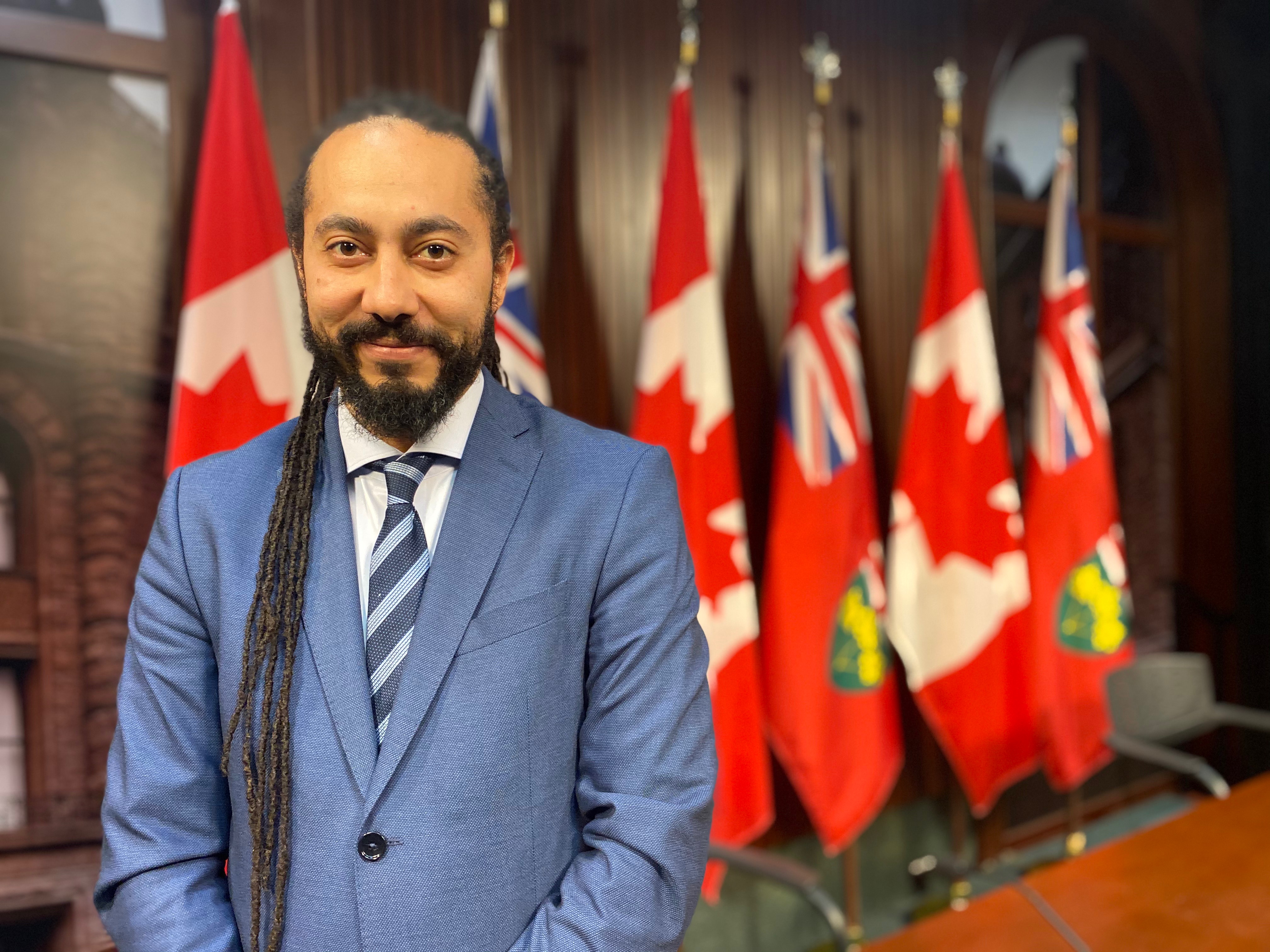 If you’ve been tuning into Doug Ford’s daily press briefings, you probably recognize this face. Christopher Desloges is an American Sign Language interpreter whose impassioned delivery has turned him into a social media star. Here, he tells Toronto Life about what it’s like to sign during a pandemic, and why we may soon be seeing less of him. (Don’t worry, he’ll still be behind the scenes.)

You have become one of the unexpected breakout stars of the Covid-19 crisis—a “rock star,” to quote the premier. When did you first realize that TV audiences were taking notice of your work?
It was probably when a friend of mine told me I was a GIF. And then I became a meme. That all happened after Doug Ford’s announcement last week about how he was planning to come after price gougers. He was using a stern tone, so I reflected that in my facial expressions and gestures. Afterwards people were asking me if I was going for an angry dad vibe. I wouldn’t say that’s what I was thinking, but I guess it’s a good description.

Does your own take on a given situation influence the way you translate?
Rule number one of interpreting is that you don’t include your personal opinion. We use facial grammar to represent the tone and intent of the person we’re signing for. I will ask myself questions like, “Is somebody actually angry or are they just speaking loudly for another reason?” The signing needs to convey not just what is being said but how it is being said.

Any other challenges those of us watching from the couch might not be aware of?
Well, one challenge I’ve had is that none of the dry cleaners in the city are open and I’ve been running out of suits. The idea behind interpreter dressing is that you want to wear dark colours, no patterns. That rules out the flashy ties or suits I might wear to a wedding. And the content is another challenge. A lot of what I’m signing is complex medical information, terms that I don’t necessarily know the signs for. What is a “vulnerable population”? How do I sign “pandemic”? How do I sign “Covid-19”? I’ve been getting on FaceTime with my friends in the deaf community and doing my best to figure it out.

Do you get any notes about the day’s topics in advance?
I don’t get any advanced notice, but there are ways to prepare. I’ve started watching Justin Trudeau’s addresses because that will often provide clues about the subjects the premier is likely to cover that day. After that’s done I’ll hop on my motorcycle and head over to Queen’s Park. It has definitely become easier as I’ve gotten a better handle on the subject matter.

You’re not signing for the prime minister, but if you were, how might that be different from signing for the premier?
I’ve signed for Trudeau before. The biggest challenged is that he jumps back and forth between French and English. That can be jarring, and when he’s speaking in French, I’m translating twice over. And then there’s the fact that he has different energy. He’s a little younger, hipper.

Can you sign hipness?
Ha! You know what, I don’t know the answer to that question. It’s a little more relaxed, maybe.

Who is the most challenging person you have ever signed for?
Whoopi Goldberg. I signed for her about seven years ago at a women’s wellness conference in Toronto. She was talking about the changes in her body in very explicit ways—things I had obviously never experienced. That was a tough one.

How and why did you learn to sign?
My aunt, who was deaf, taught me when I was a kid. I would go and visit her every week—I would point to things and she would teach me the sign. She bought me a dictionary, and I took it home and studied it front to back. Eventually we were having whole conversations. At the time I was very into the Ninja Turtles, and I was positive that I wanted to be a ninja when I grew up. I thought knowing  silent language would be a pretty useful ninja skill. Later I remember seeing an interpreter at my aunt’s condo board meeting and thinking, I could do that. I enrolled in the ASL/English interpreter program at George Brown in 2002 and founded my business, Toronto Sign Language Interpreter Services, in 2013.

Parliament recently passed Bill C-81, which requires that information from the federal government be made fully accessible to people with disabilities. Presumably that’s good for business?
It’s having a monster effect on our work, and more importantly the opportunities for deaf and disabled individuals to participate in society in a way that so many people take for granted. There are so many intricacies in terms of the language we use in an emergency. Think of all of the new terms, the instructions that come every day. We want everybody to have the same access.

You have said that you may be stepping away from the spotlight soon. Why?
The ideal situation is to have a deaf interpreter signing to at-home audiences, so that is what we are trying to organize. It’s not easy, though. There is a huge need for interpreters right now, so demand is high.

How does that work?
You have an English to American Sign Language interpreter like me translating, and then a deaf interpreter will interpret my signing. The way to think of it is that sign language is my second language, so there are things that I am able to convey less fluently than someone whose first language is signing. It’s sort of like if you’re a French speaker, listening to Stephen Harper versus listening to Justin Trudeau. They both speak French, but Trudeau is speaking in his first language.

Can you give an example?
When you think about sign language—and about all translation, really—you need to think about it in terms of ideas and concepts rather than just words. Take a term like front-line worker. That doesn’t mean a line in front of something; it means a group of essential individuals such as first responders, nurses and doctors who are working directly with the public. That is something a deaf interpreter is going to be better at figuring out. It’s an important issue in the sign language community. I will still be there, I just won’t be in front of the camera.

Does that mean you can at least stop worrying about your suit supply?
Maybe. I’m hoping Doug Ford wants to hang out after this is all over, so I need to look sharp.