“A teenager left me a thank-you note after her second shot”: This psychiatrist is working as a Covid vaccinator at CAMH

“A teenager left me a thank-you note after her second shot”: This psychiatrist is working as a Covid vaccinator at CAMH 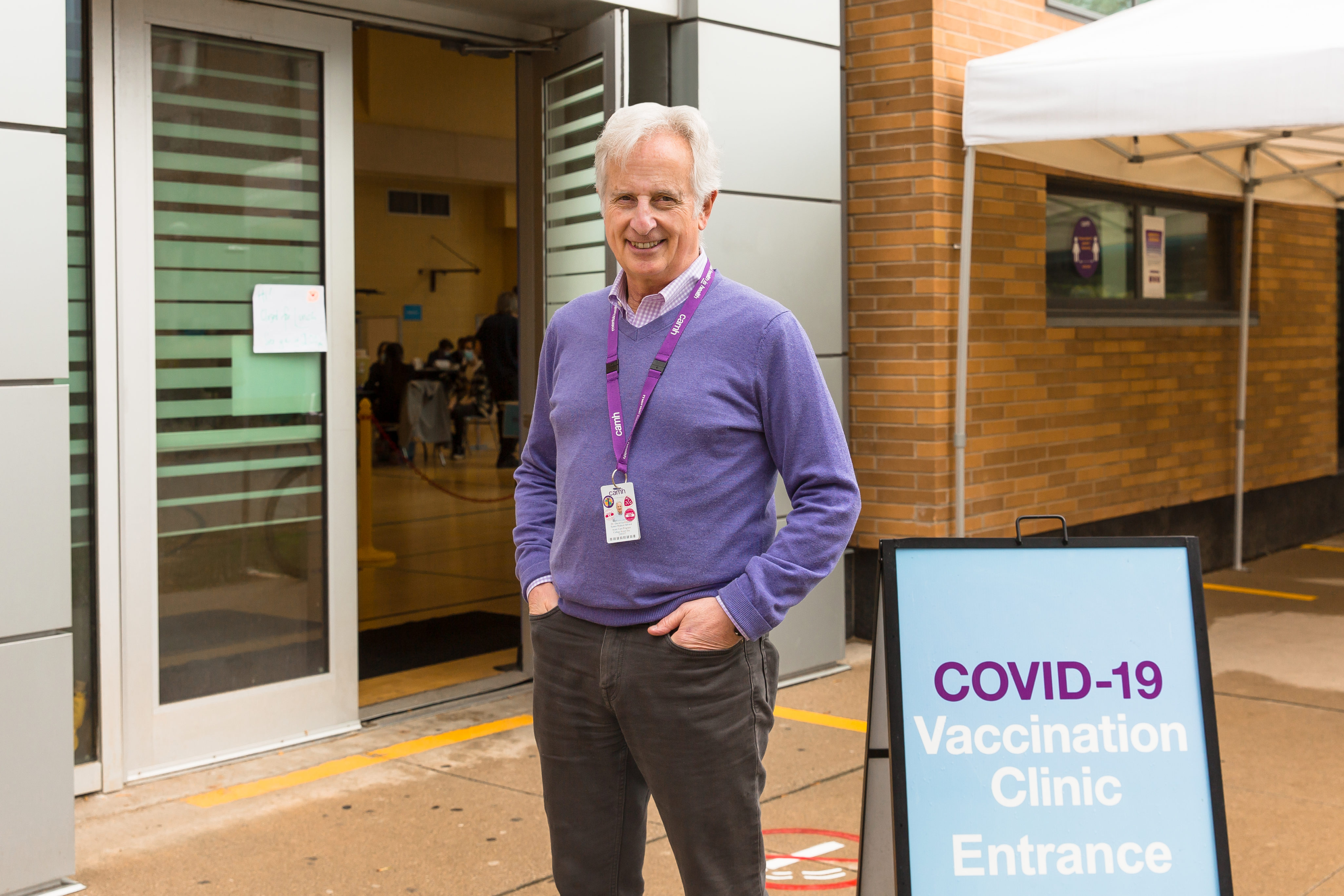 I work as a psychiatrist at CAMH. In the pre-Covid era, my job mainly consisted of seeing new patients who’d been referred by family physicians and nurse practitioners for diagnostic assessment. People came from all corners of the GTA and beyond, grappling with public transit or parking, forced to take time off work or arrange child care. When the pandemic began, I became, like so many others, a telepsychiatrist, seeing patients all day on a secure video platform from my home into theirs. But something novel brought me back to our hospital site at Queen and Ossington. In April of 2021, I started doing four-hour tours of duty once or twice a week in the CAMH vaccination clinic, sitting at tables in the repurposed gymnasium, a line of eager vaccine recipients snaking the outside the building.

Being a vaccinator reinforces a fundamental sense of my professional and personal identity. I come from four generations of pediatricians, beginning with my grandfather Alton Goldbloom, who spent much of his clinical practice vaccinating patients. At McGill in the early 1930s, in his efforts to fight polio, he published a study on active immunization in rhesus monkeys against the dreaded disease. This led to an experiment at the Rockefeller Institute in New York, where he and a colleague injected convalescent plasma from monkeys with polio into the thigh of a young boy—who happened to be my father, Richard Goldbloom. In his autobiography, my father wrote, “My screams were clearly audible in New Jersey. In those days, the concept of informed consent was unknown. Had that been an option, I would have flatly refused. In retrospect, I suppose my father’s intentions were commendable. He wanted to protect us from polio if at all possible. Eighty years later, I have partly forgiven him.”

I had another historical vaccine connection. When I was a little boy, I spent summers on Cape Breton Island, near a small coal-mining town where my mother, Ruth, was born and raised. During those vacations, a local GP—an urbane far-from-home South African named Barney Appel—took me on as his “assistant” for a couple of days, allowing me to accompany him as he went door-to-door vaccinating the children of miners. My job was to shake bottles of vaccine and then listen as the kids yelped from the needle.

During Covid, I was filled with admiration for my health care colleagues in ERs, ICUs, inpatient units and elsewhere. When the opportunity arose to work in CAMH’s vaccination clinic, I leapt at the chance for me to pitch in beyond my normal clinical work. Selfishly, I was also eager to do something other than sitting at home staring at a monitor. I wanted to interact with patients, families and colleagues.

As a psychiatrist, it had been a while since I had given an intramuscular injection. After watching a mind-numbing but mandatory one-hour government video on the bureaucratic requirements—followed by an excellent 90-second YouTube video on how to give an intramuscular deltoid injection—I was ready to start. I accompanied a seasoned jabber, my colleague Bernard Le Foll, to an inpatient unit, and after watching him do it twice, I was ready. Frankly, registering patient information on an iPad was more intimidating than sticking the needle in and pushing the plunger.

Every week, I eagerly await my time in the clinic, where I can witness the leadership and highly infectious positive vibe of the clinic manager, Erin LeDrew. She gathers all of us—front-door greeters, pharmacists, nurses, doctors and monitors—at a whiteboard near the basketball hoops for a huddle at the start of each clinic, updating us on ever-changing protocols, reviewing appointment numbers, and coming up with new ways to get more vaccines into more arms. Once we open the doors, patients flow in to the vaccination tables and then to a recovery area for 15 minutes of observation. We offer people the option of a privacy booth for the jab. They may choose to use this because of their anxiety, shyness, cultural traditions, or simply the challenge of exposing their shoulder for an injection.

The vaccination encounters are typically brief—five minutes or less of introductions, explanations, screening questions. Then there’s the coup de grace of the actual injection, the congratulations, and the post-vaccine instructions. I have my patter down, and patients usually relax after I ask them a series of questions about their medical history, culminating, with a very serious look on my face, in the most important question: “Are you right-handed?” This determines which shoulder will receive the vaccine.

I have never seen so many tattoos. Patients with them are pretty chill about a quick and tiny needle. Some young, muscle-bound people have a hard time allowing their upper arms to fully relax, or flinch reflexively with such power that I’m afraid the needle will get stuck (it hasn’t happened yet). I’ve also never met so many people with needle phobias, some of whom have gone to other clinics already and left without their shot because they were overwhelmed by anxiety. They usually get over the hump with a little extra time, reassurance and distraction. And it helps if I keep the needle out of sight.

Psychiatrists traditionally allow an hour to conduct a formal assessment. The vaccine clinic encounters are much briefer—and a powerful reminder of how much we can find out about people in a matter of minutes. I learn what is important to them, what they fear, and what they enjoy. I’ve realized I can do something positive for someone in a short period of time and make the experience as helpful as possible. A young teenager who came back to me for her second injection shyly left me a thank-you note for making the process easier for her—and included a Tim’s gift card. It was a sweet encounter.

For virtually every patient, the anticipation of injection is worse than the reality. All of us jabbers have heard repeatedly, “That’s it? I didn’t feel a thing!” Some people have even asked me to show them the empty syringe to confirm they have been vaccinated. But there are also the vaccine-hesitant people who change their mind partway through the screening questions. I try to persuade them and address their concerns, but sometimes you simply have to acknowledge their right of refusal and hope your support will ultimately lead them to return.

These brief encounters provide so many opportunities to engage with people. I ask about the meaning of their exposed tattoos or, for people born outside of Canada, what their journey here has been like. I’ve met more Tibetans in the past six months than I have in the previous 67 years, as well as students from around the globe who find themselves in Toronto. I’m not shy about asking for restaurant tips from people from other cultures, and they’re generally happy to provide advice. I’ve been told repeatedly that Portugal is the best place for a holiday (coincidentally, all purveyors of this advice were Portuguese). It is a pleasurable task on so many levels. First and foremost, after our long period of isolation, it is great to be among colleagues and patients without having to say, “You’re on mute,” or to ask them a question without clicking on a raise-hand icon. Wiping someone’s shoulder clean with an alcohol swab, gently pinching some flesh, inserting the needle, and applying the band-aid are all moments of connection. It’s remarkably different from the rest of my work. How often do 10 to 12 people thank you in a meaningful way every hour? How often do you get to feel that you are making a small but useful contribution to fighting an illness that threatens all of us? And how often do you get to witness at close range such immediate and palpable relief? Recently, two patients wept with happiness on receiving their second dose (one warned me beforehand, “I’m going to cry but I’m not upset”).

Over the years, I’ve have had the opportunity to preside over citizenship ceremonies, welcoming and congratulating new Canadians from around the globe. My son Will recently pointed out that vaccinating serves a similar purpose—I feel like I’m welcoming people from a roiling pandemic sea to safer harbours. I’m as eager as anyone for the pandemic and its restrictions to be behind us. But I will always be grateful to have experienced the joy of jabbing.