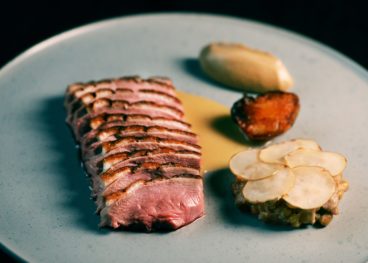 Chef Jeff Kang worked at Bosk, the restaurant at the Shangri-La, where every plate is photogenic but not always exciting to eat. At Canis, his first headlining act, he proves he’s the real deal.

Take how he layers strips of cured trout with wafers of pickled cucumber and radish on a pool of horseradish-infused cream, marrying the briny and the tart, the lusciously soft and the crunchy. The composition reminded me of ocean waves or the most glorious 1970s woven wall art. Kang says he’s aiming to help define Canadian cuisine. He’s taken notes from the new Nordic movement and the tenets of locavorism. He advocates a hushed minimalism—which puts him in a league with Dandylion, Boralia and Actinolite—most visible in the grey walls, grey-aproned servers and unadorned wood panelling.

But let’s not over-intellectualize. I’ll go back for the whole-roasted duck, its skin a burnished gold; a salad of pickled beets and goat’s milk ricotta; and braised lamb shoulder under a blanket of parti-coloured carrot and daikon rounds. And I’ll return for a milk chocolate mousse, buckwheat ice cream and shards of meringue. Kang wants to remind us of glaciers, though what glacier tastes this sweet?