As a young woman, I was a flight attendant for Air Canada. In 1990, during a layover in Zagreb, I was pushed out of an airport bus by a passenger who was rushing to catch her plane. The bus exit was several feet off the ground, and I fell, head first, onto the concrete. The impact caused severe brain damage: for years, I was unable to read and barely able to speak. I still suffer from chronic nerve pain, incontinence and spinal stenosis, and I require the use of a wheelchair. Between workers’ compensation payments and some financial support from my mother, I was able to cover my medical expenses and live independently in a Lawrence Heights condominium, which I bought in 2000 for $200,000.

In 2012, my life began to unravel, I turned 65 and was no longer eligible for workers’ compensation. Instead, I got a mere $900 per month from the Canada Pension Plan. Two years later, I got into a car accident and, in the aftermath, I fell behind on my mortgage payments. Then my mother passed away, depriving me of my best friend. I still had medical expenses—diapers, medications, wheelchair repairs—and suddenly I found myself more cash-strapped than ever before. In desperation, I refinanced my mortgage through a series of private lenders. In 2016, the man who held my mortgage demanded a balloon payment. When I couldn’t meet that request, he had me evicted.

I found a homeless shelter downtown that was able to house me along with my wheelchair and my two companions, my shih-tzu, Harry Potter, and my shih-tzu-poodle mix, Booboo. That was the only good thing about the place. It was impossible to get along with the other residents. At the dining hall, people pushed and shoved each other. If my wheelchair got between them and the food, they’d yell at me. One of the guests took seemingly endless showers in the only accessible washroom, while I waited outside in increasing discomfort. Another woman hated my dogs and screamed anytime they got near her. After 18 months, the staff told me they were transferring me to another shelter. I wasn’t sorry to leave.

But the next place, in the west end, was even worse. I shared a room with 14 other women. The space was a maze of mattresses and recliners. There was no way to steer my wheelchair around these obstacles, so it became impossible to access the bathroom at night. Few things are more degrading than having to change your own diaper in a room full of people you barely know. Worse still was the violence. One time, during an argument, a woman choked and beat a younger girl right in front of me. I can still hear the loud crack of the girl’s head against the wall.

By July of 2019, I’d had enough. I loaded my medical supplies and first-aid kit onto my wheelchair, put Harry and Booboo on my lap, and moved out to Dufferin Grove Park. I found a pleasant spot by the playground and took a deep breath. The air was so much purer than in the shelter. I was going to live in the park for as long as I could. 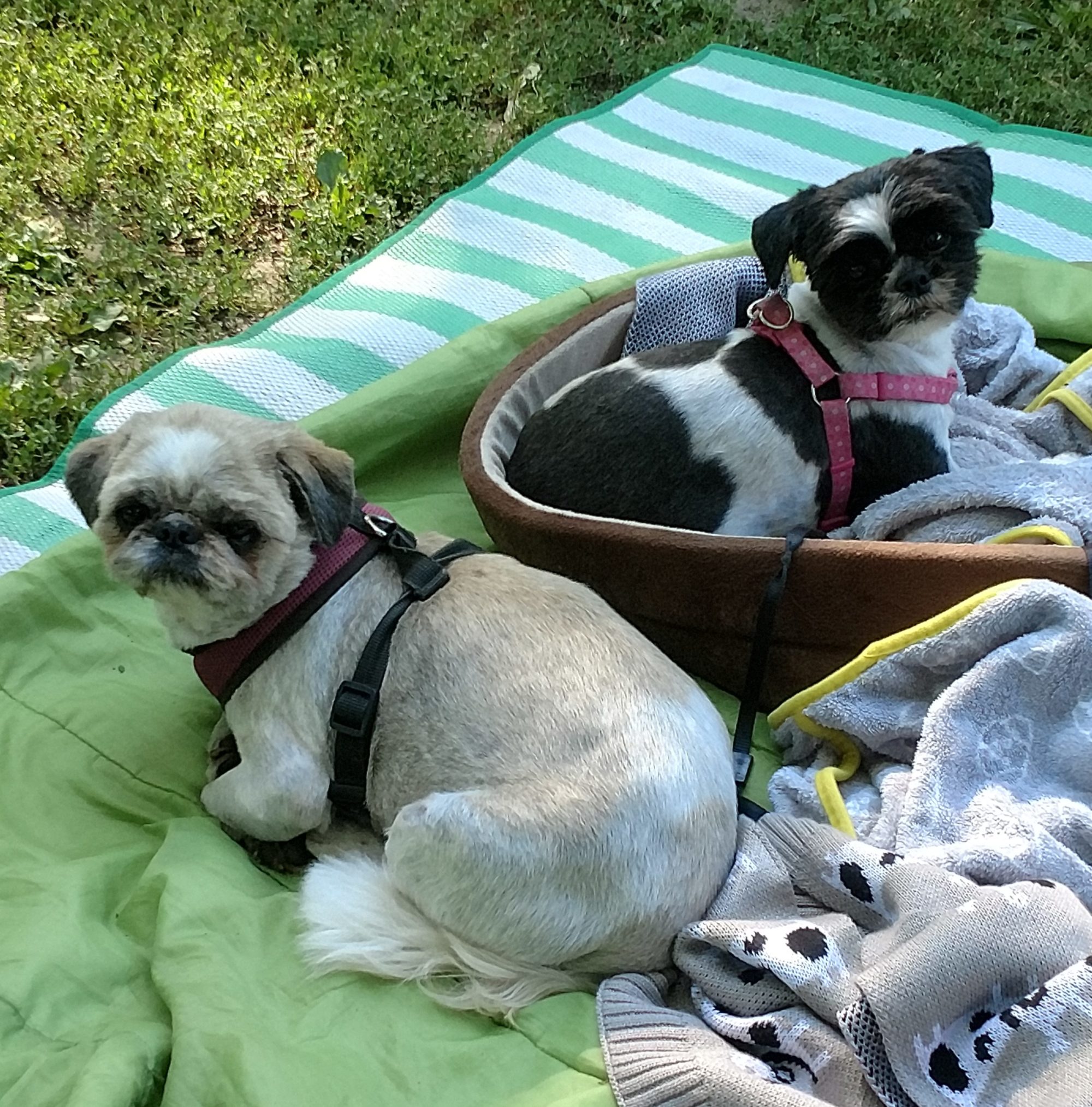 When your home is the great outdoors, you learn to be resourceful. Mosquito repellent is expensive, but apple-cider vinegar does the job almost as well. I rigged up a shelter by putting a plastic tablecloth over a beach umbrella, and to keep my little patch of land from flooding, I built a dike out of kitty-litter bags. I bought these necessities at the nearby Dufferin Mall, which also had a bathroom with a large sink where I could wash up. I received my CPP payments via direct deposit at the bank.

Over time, the park revealed its secrets to me. I made friends with the raccoons, squirrels, and chipmunks and discovered that even the trees had unique personalities. One had a trunk like an old face—two hollowed-out eyes and a nubby nose. Another resembled a pregnant woman. Her boughs extended upwards, like arms; beneath them was a bump of a belly.

The best thing about the park was the people—both the visitors and the city employees. Of course, not everybody enjoyed having me around—some parents warned their children to steer clear of me—but I knew how to make myself liked. I stocked up on free coupon books and copies of Now Magazine, which I dispensed to tourists who passed through, and I bought a bucket of coloured chalk for the kids who came each day to play. Some drew magnificent pictures on the pavement. One, a 12-year-old named Francesca, will surely grow up to be a successful illustrator.

In the homeless shelters, I’d forgotten that human beings were capable of civility, but the park people refreshed my memory. Volunteers at the local community kitchen and the weekly farmers’ market made sure I had enough to eat, and when visitors had barbecues, they’d often set aside food for me. One day, I was sleeping in my wheelchair, when my phone fell out of my pocket. In the shelter, it would’ve been stolen instantly. In the park, though, I woke up to a young man gently tapping my shoulder. He handed me my phone, and his girlfriend gave me a slice of key lime pie that she’d saved from a picnic. After I’d been in the park for a few weeks, some nearby residents built me a kind of tent by attaching a tarp to a play structure. At night, I’d hole up in my refuge and watch classic movies on my portable DVD player—Breakfast at Tiffany’s, Ben-Hur—with Harry and Booboo beside me.

More on the Housing Crisis 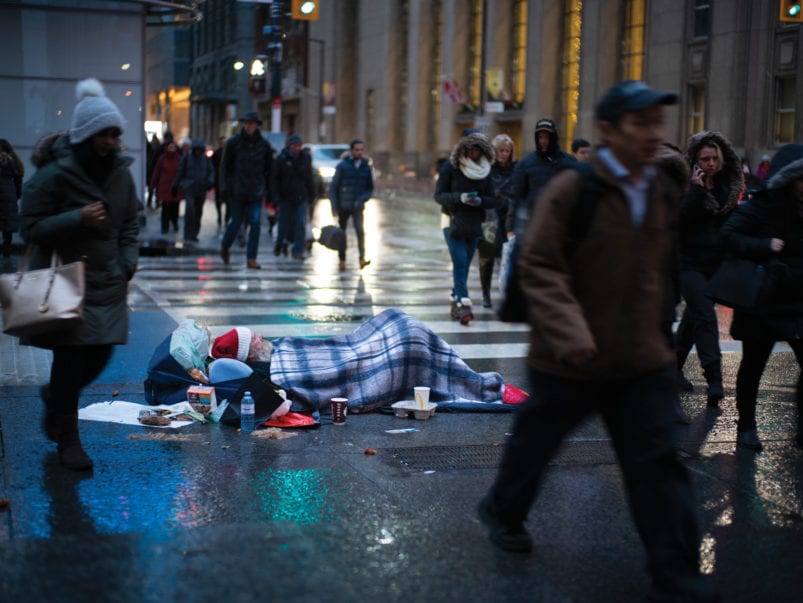 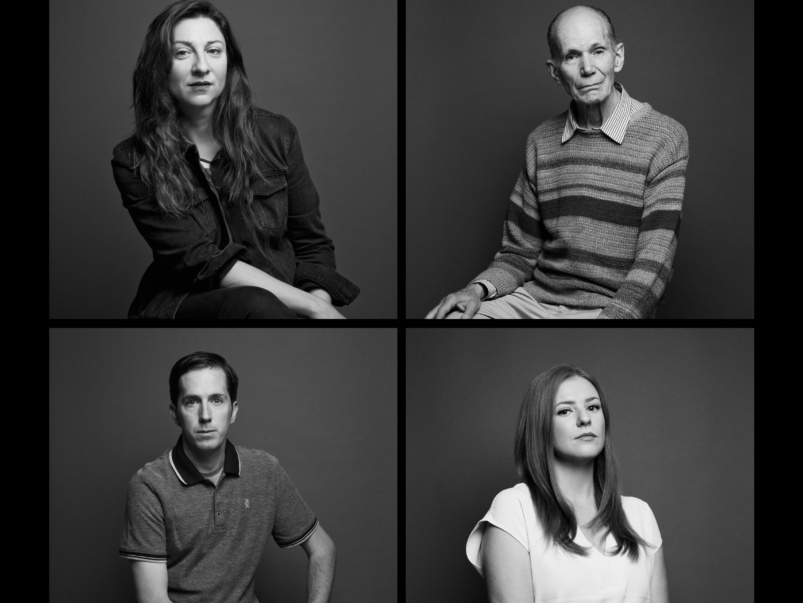 In October, a young man named Brent visited me. He was from an organization called Streets to Homes and wanted to ensure I had a place to live in the winter. I explained that, if given a choice between returning to a homeless shelter or dying of frostbite, I’d opt for death. Six weeks later, Streets to Homes found me a private subsidized apartment in the Beaches, which I could rent for $700 a month. By this time, I’d applied for and received an Air Canada pension, which increased my income to $2,600 per month.

I moved into my new apartment in November. The place is a 300-square-foot studio with wood floors. Most importantly, it’s all mine. I feel secure, and for the first time in years, I’ve started cooking my own meals. But I miss the park, particularly the fresh air and the occasional meteors at night. I still go back on Thursdays to visit the organic market, and I correspond by email with my many park friends. One of them is Francesca, the young illustrator, who wants to work with me on a book. We’ve already got a title: The Old Lady in the Park With Her Dogs.