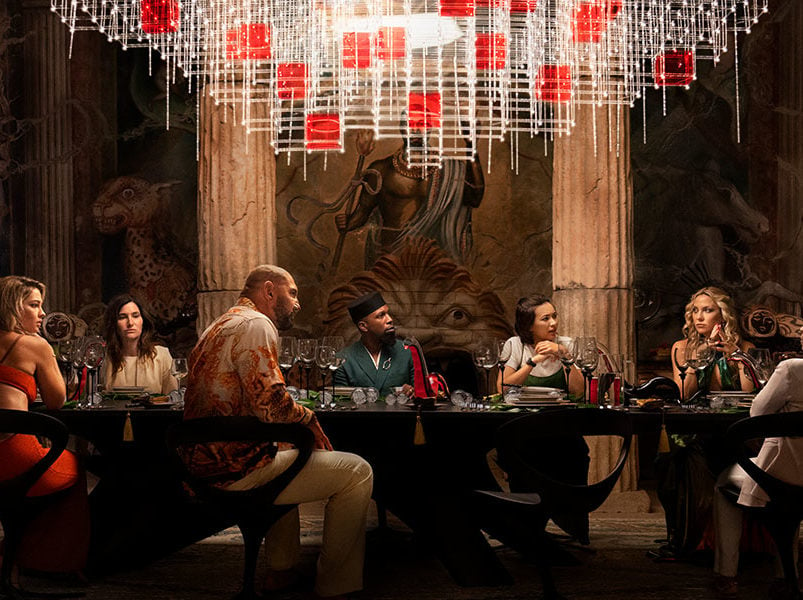 A lot has happened since the last pre-pandemic TIFF, including a slew of new restaurants that have—in spite of one of the world’s longest lockdowns—popped up over the past two years. Here are more than a dozen newish spots worth visiting during the film festival. Bonus: they’re all within walking distance of a red carpet.

Little Sister for the basement speakeasy

One Victorian row house. Two storeys. Three bars. If this Dutch Indonesian snack bar were a movie, that would be its tag line. The kitchen sends colourful, flavour-packed plates out to patrons quickly, making this the perfect spot to fuel up before or after a show. Ingredients like turmeric, coconut, lemongrass, star anise, tamarind and sambal are worked into rich curries, scrumptious skewers and deep-fried delights. To keep the party going, guests can sneak down to XXX, the basement speakeasy. Bartender Alex Lakusta’s new-wave cocktails, like Ants on a Log (a Brazilian-inspired mix of cachaça, pisco, guava cordial, soursop and lime topped with egg white and garnished with real ants), may be buzz worthy, but don’t skip past the classics: their pre-diluted-then-frozen martinis are truly luscious.

Bar Chica for the Toronto-style tapas

For those looking to get away to Barcelona, if only for a night, Chica isn’t the ticket. This is Toronto tapas. Here, plates are rooted in Spanish tradition but reworked with Ontario ingredients and a predilection for global flavours: arroz negro with binchotan-grilled squid, local ramp vinegar–cured sardines and seared Lake Huron trout. There’s an equal focus on wine and cocktails, so expect some recherché Spanish varietals (bobal, listán negro, albariño, hondarrabi zuri) and creative cocktails that riff on the the classics. The broody Portland Street room is also your best bet for a late-night nosh—Thursday to Saturday, the kitchen stays open until 1:30 a.m.

Minami for sushi specials in an award-winning space

Directly across from TIFF Bell Lightbox, this destination for aburi (flame-seared) and oshi (pressed) sushi is no by-the-book nigiri and maki joint. The 4,600-square-foot space—which local firm DesignAgency won an international award for—is a visual spectacle anchored by a floor-to-ceiling koi fish mural by Japanese artist Hideki Kimura. Imported delights (uni from Hokkaido, bluefin from Ehime, madai from Fukuoka) are perennially tempting, but TIFF specials, such as the miso-marinated sablefish topped with green onion ash and served with Hokkaido scallops, shiso-pickled corn salsa and yuzu cream foam, are not to be missed.

Those looking to escape the film-festival frenzy need only walk four blocks west to unplug at this lo-fi pizzeria with frills—think humble pepperoni pies alongside others with toppings like boar meatballs. Here, the New York–style pizzas (they pass the fold test) start with a three-day-fermented dough made with high-protein Canadian flour. The red sauce, meanwhile, gets an extra boost of umami thanks to some kombu and shiitake mushrooms cooked with the tomatoes. Beast’s adoration for the Big Apple isn’t limited to the pies—even the space was even loosely modelled after New York’s oldest Irish pub, McSorley’s. The drink menu, though, is an ode to Ontario and lists Rosewood wines, Blood Brothers beers and Steeltown ciders.

After a one-year intermission, Brothers’ second act opened last July in the old Imperial Life building. In its move to the Financial District, none of the original charm has disappeared. If anything, 20 Victoria just keeps getting better. Chef Julie Hyde’s six-course tasting menu changes based on what’s in season, but it’s never not a showstopper. Reservations are typically booked up weeks in advance, but the wait-list provides more spontaneous diners with hope, and there’s always a bar table or two saved for walk-ins, who can take advantage of the equally excellent à la carte menu and stellar wine selection.

The Writers Room for the storied past (and foie gras doughnuts)

This Park Hyatt bar has seen some of TIFF’s glitziest parties and hosted a bevy of red carpet celebs including Pierce Brosnan, Angelina Jolie, Christopher Plummer and Drew Barrymore. But, along with the rest of the hotel, it’s had a bit of a refresh since. The 17th-storey restaurant and lounge features oxblood banquettes, dark-stained oak walls, a double-sided fireplace and black-stone tables. New floor-to-ceiling windows ensure everyone—not just the lucky few who land a seat on the expanded terrace—can enjoy sweeping views of the city. Don’t skimp on the bar snacks: the foie gras doughnuts may sound like a CNE novelty, but they’re outstanding. 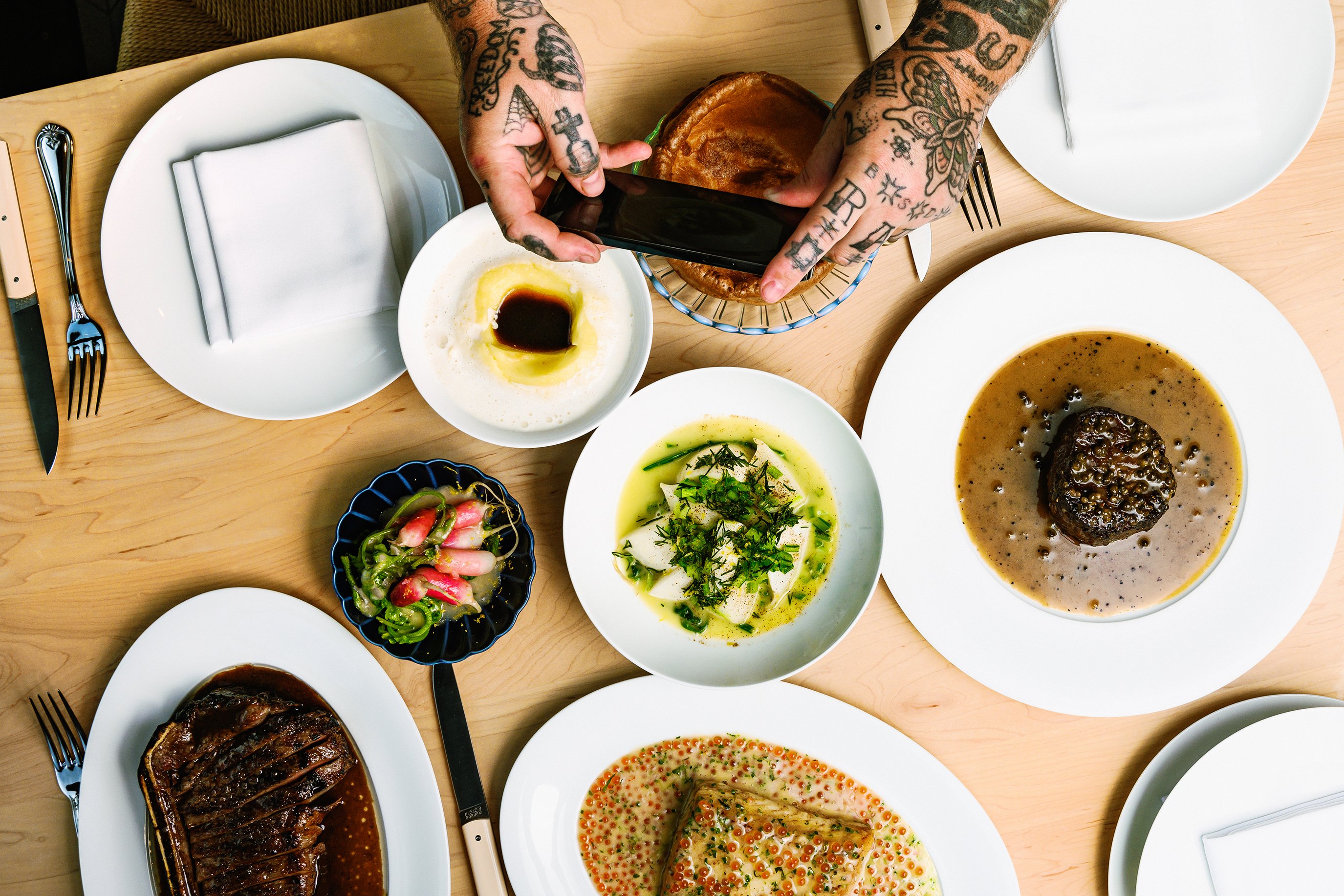 Prime Seafood Palace for surf and turf from a celeb chef

Matty Matheson’s shiny new Queen West restaurant is a bit of a trek from TIFF’s ground zero, but we’re betting that more than one food-loving celeb will be spied at this steakhouse. Although chef Coulson Armstrong’s menu shows restraint, it doesn’t eschew indulgence. Kristal caviar, 30-day-aged A5 Wagyu striploins and fist-size Gulf of Mexico shrimp are just a few of the menu’s opulent flexes. And the more humble dishes, like the mashed potatoes (a velvety bowl of cream-whipped Yukon Golds topped with a silky chicken demi-glace), are just as worthy of oohs and aahs.

Nostalgic foodies rejoice: this classic French bistro is back. Le Sélect’s second coming has long been in the works—for two years, the 45-year-old Wellington Street staple sat empty. But, this July, Édith Piaf once again filtered through the speakers, diners sipped on rare bottles from Bordeaux and the kitchen, now overseen by chef Ted Corrado, churned out French faves: steak tartare, buttery escargots à la bourguignone, velvety bouillabaisse piled high with cockles and enormous côtes de bœuf. Devotees may notice that the menu has a bit more finesse since reopening, but that’s one of few changes: the sepia-hued room is as it was, and the wine list remains unparalleled—oenophiles will delight in leafing through the 56-page tome. The 1,200 bottles on offer range from affordable Côtes du Rhône reds ($60) to a $4,250 bottle of Sauternes (Chateau d’Yquem, 1947).

Casa Madera for the theatrical presentation

This Mexiterranean restaurant (the menu flits between the Mediterranean and Mexico, blending irreverently and straying more than occasionally) is all about flash. Many plates feature a touch of theatricality in their presentation, and guests can expect over-the-top, American-sized mains, like an epic seafood tower piled high with top-shelf delights. The cocktails don’t skimp on flamboyance either—citrus garnishes are ignited, dry ice is infused with essential oils and smoke-filled bubbles pop on first sip. The space is located at the base of 1 Hotel Toronto, an eco-friendly boutique inn, and there’s an obvious effort to include ample vegan options (the fish-free ceviche is particularly fresh).

Toronto culinary stars collided to create this King West lobby-bar-inspired lounge. The collaboration between industry vets Robin Goodfellow (Bar Raval) and Amanda Bradley (Alo) is all about finesse. From the covered Portland Street patio to the restaurant-spanning light fixture—an enormous LED brushstroke that leads the eye from foyer to dining room—just about every detail has been agonized over. The crowd-pleasing menu is anchored by American classics (wedge salad, shrimp cocktail, burgers, lamb rack), but the Royal Osetra caviar service ($269 for 30 grams) is a splurge-worthy snack. Pair it with one of Goodfellow’s champagne cocktails, like the $120 Casablanca, made with Hennessey XO and champers (or one of the more reasonably priced, equally delicious options).

Toronto’s about to have a slew of stars once Michelin announces its list smack dab in the middle of TIFF. If there’s one chef who’s a sure bet to pick up a few, it’s Alo’s Patrick Kriss. Alder, the chef’s newest restaurant located in the sleek (also new) Ace Hotel, will be nearly impossible to snag a table at over the course of the festival. But, for excellent people-watching (and perhaps some celeb-spotting), the hotel’s lobby bar is a good alternative. The compact menu of sharable small plates—it’s just nine items long, and one of those items is $12 fries—is also by Kriss. And it’s walk-in only, so no planning needed.

Yorkville’s chic new cocktail bar serves up more than a soupçon of Montreal sophistication. The second-floor lounge, done up in rich woods and jewel-toned velvet by award-winning interior design firm Lisa Ho Studio, is the city’s newest spot to geotag yourself at on Instagram. The drink list, by Ben Kingstone of Mother and Hotel X, features fancy bottle service and 30 fussed-over cocktails, designed to sate every type of sipper—from ABV light to bold and booze-forward. Peckish? Snack options include Kaluga Gold Caviar alongside humbler munchies such as popcorn—truffled, of course. This is Yorkville, after all.

There’s no head chef at Yorkville’s swanky new Indian restaurant. Instead, each of the five chefs in the kitchen—most of who trained under Michelin-starred chef Vineet Bhatia—specialize in a particular style of cooking. Guests can expect things like sesame-marinated, tandoor-cooked prawns; pan-seared lobster in a chili, fenugreek and coriander-laden bhatti masala; and Kashmiri-style slow-cooked lamb shanks. Cocktails (and mocktails) draw heavily on house-made infusions. The Golden Nineyards is made with rum that’s been infused with elaichi banana, dry vermouth spiked with turmeric and curry leaf, coconut syrup and fresh pineapple—all finished with a dusting of matcha and blue pea flower powder.